After looking at Piers Gill from many angles and on many walks, I finally decided it was time to give it a go. This is the gill that a guy spent about a month in the bed of the gill with a broken leg, virtually no water (it was a dry summer like wot we used to get)and a bar of chocolate after he fell into it (think he fell around 100ft or so). Probably not a happy chappie by the time they got him out! It does have a bit of a reputation but is a most dramatic piece of scenery! 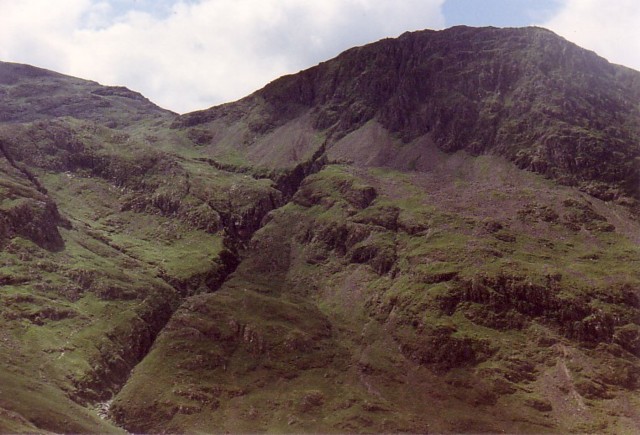 We parked at Wasdale Head on the green and set off the along the track past the little church (I think Richard had a look in but I’m a bit atheistic so didn’t bother). It takes about half an hour up the valley on the good track which heads for Styhead Pass (not the one which rakes up the side of Great Gable). The valley is very pretty and not many people actually seem to use the track so it was quiet.

At the confluence of the beck coming down from the pass and the one coming from the right, you follow the right-hand one round the corner keeping on its left side. This is the beck which comes from Piers Gill and also Greta Gill. We headed up the steepening grassy bank to where the beck splits again and then you fork off to the right on the Piers Gill one, again keeping on its left.

We found the route very straightforward at first, just going up on grass and the route is actually like that for much of the way really. However, early on there is one re-entrant which you have to go around up some very easy rock slab and then come back to the gillside. There are spectacular views down into the gill and also looking up the gill towards Lingmell crags. 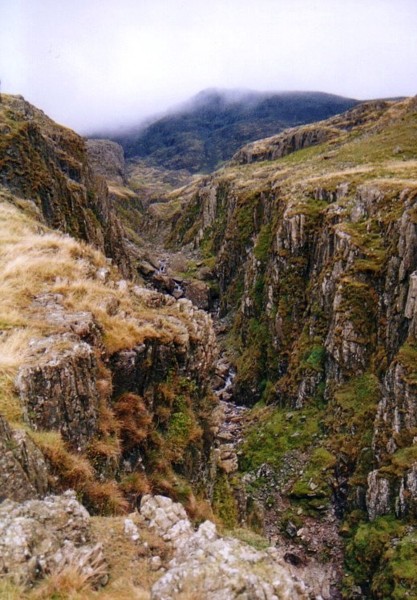 Didn’t take many piccies though as the lighting was awful it being a dull and damp day.

About half way up the hill we came to ‘the awkward bit’. It being north facing and almost permanently damp, it is bloody awkward too as it’s very greasy indeed. You are faced with a long crag running across your route and there isn’t really a way round it so the path goes away from the gill and bravely heads off to tackle it. The route up the crag is pretty stepped but nonetheless gets to a very awkward bit higher up. You end up on a stance in a little hollow and total puzzlement about where to go next. In these cases Richard is my scout as he is the one with the head for heights who can climb back down things if necessary.

He looked left at a slimy, mossy, vertical bit which wasn’t very high so looked possible. After a few attempts and after sliding back off it quite a few times, he decided this wasn’t the way! We had a gully going back down the crag which made a gap between where we were standing to a possible looking route to the right. Richard had several goes at stretching across the gap on the slippery rocks and eventually managed it. I wasn’t so keen though

- standing with my foot on one slippery rock and trying to reach over a gully with about a 20 foot drop down it to get to another slippery rock isn’t my idea of fun really, especially when even the handholds were pretty slippy too. I eventually plucked up courage and after quite a bit of cursing stretched across it (at least my legs are very long so they are a big help in such situations).

We then went on a nice slippy but quite wide ledge path towards the edge of the gill and round the corner. Round the corner (to my absolute delight... NOT!) was a crossing of a side gill. This was on loose rock at the edge of an absolutely vertical drop into Piers of probably 40 feet and then it headed for a really narrow looking greasy ledge which went around the corner out of sight. It was possibly alright but I really didn’t like the look of it and had had enough so I panicked and headed off on all fours at great speed up the loose rock of the side gill with the yawning drop directly behind me. Richard was absolutely horrified and asked me where the hell I was going – I just said I was going! I scrabbled to where there was some nice grass to my right and climbed out onto that with some relief. He took the sensible route round the ledge which he said was fine.

After that there are absolutely no problems and you soon get to the bit where the gills turns sharp left and goes more or less level. This is pleasant walking with great views. Drawn on in white!

Incidentally, you could easily walk along the bed of the gill from where the Corridor route crosses the top end of it and go to the corner for a peep down the steep bit. 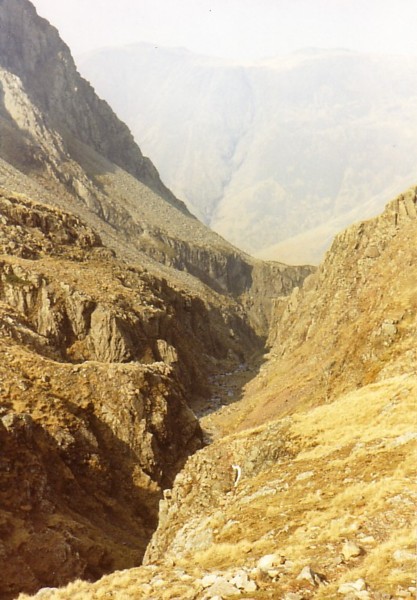 From this point you can go up several mountains, Scafell Pike being the most obvious as you reach the Corridor Route. You can also have a nice jaunt up Lingmell and have a look down the crags back to the gill – quite spectacular. That’s what we did and we then descended the long ridge back down to the head of Wastwater and walked back to the car. Well I had to put a piccie of the screes in

Last year we chose to cross to the left side of the gill and attempt a climb up, not recommended,where the scree is wasn't too bad, but from then on it was hands and climbing and not the easiest route to do,we did the right thing in the end and climbed back down as if we had gone any further my collegue would have still been there froze to the spot, certainly a lovely area to be in though