Following an early night and better sleep, I woke feeling refreshed on Friday morning. The weather was forecast to be good and I seemed to have banished the gremlins from the day before. Worrying about my back, I decided to take out anything from my bag I didn’t need. Removing things like extra water bottles (plenty of streams today), avon skin so soft (no midges yet…), head torch (mega early start and easy track for walk out) and chocolate coins and cola bottles amongst other things…I always like to have too much than not enough

After boiling over my porridge (again)

and packing my sandwiches, we put everything in the car and set off for Inverlael. It was an absolutely gorgeous morning – the sunrise was turning the snow red and all the hills were glowing. Had to stop for views of An Teallach and Beinn Dearg 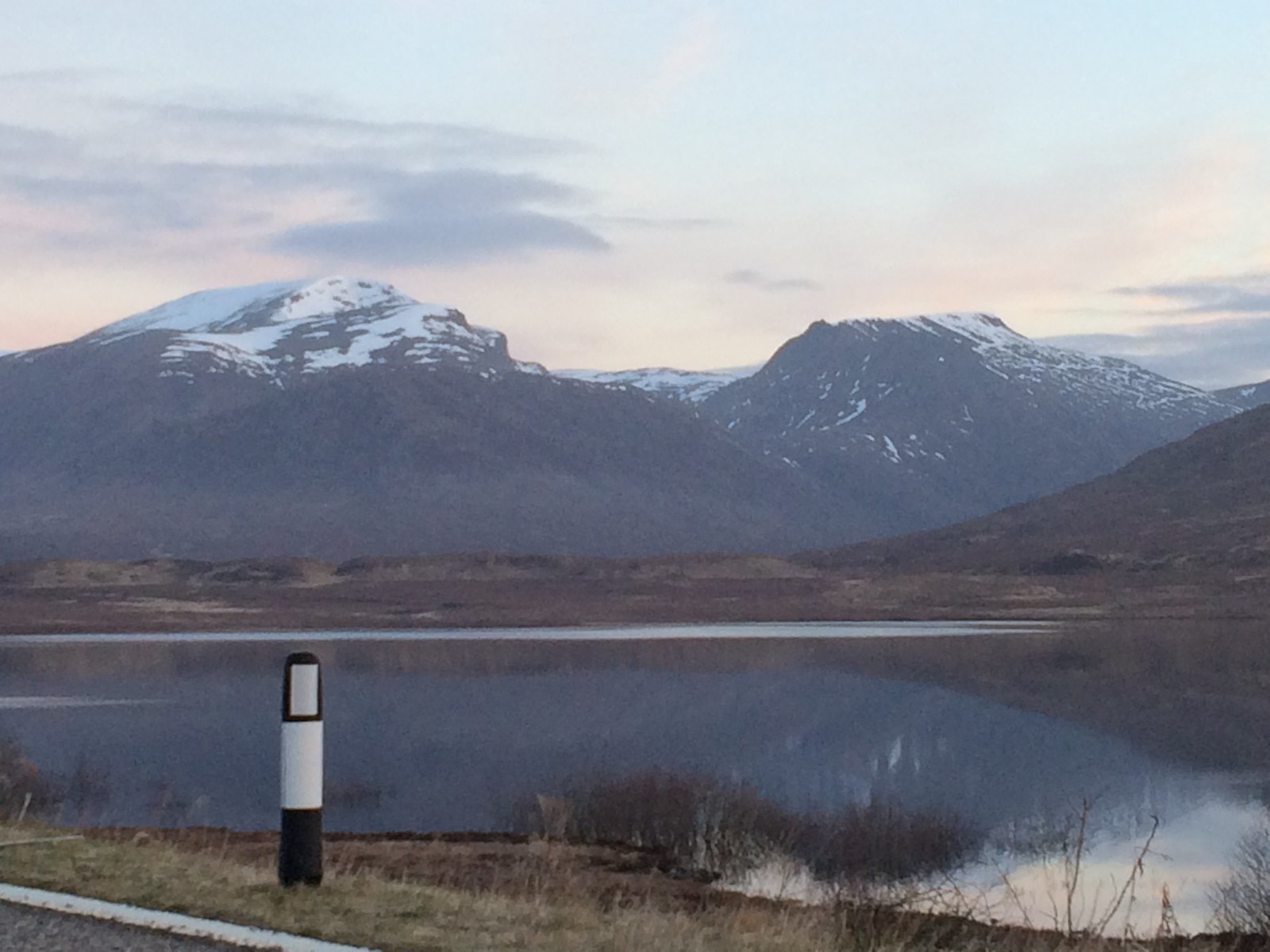 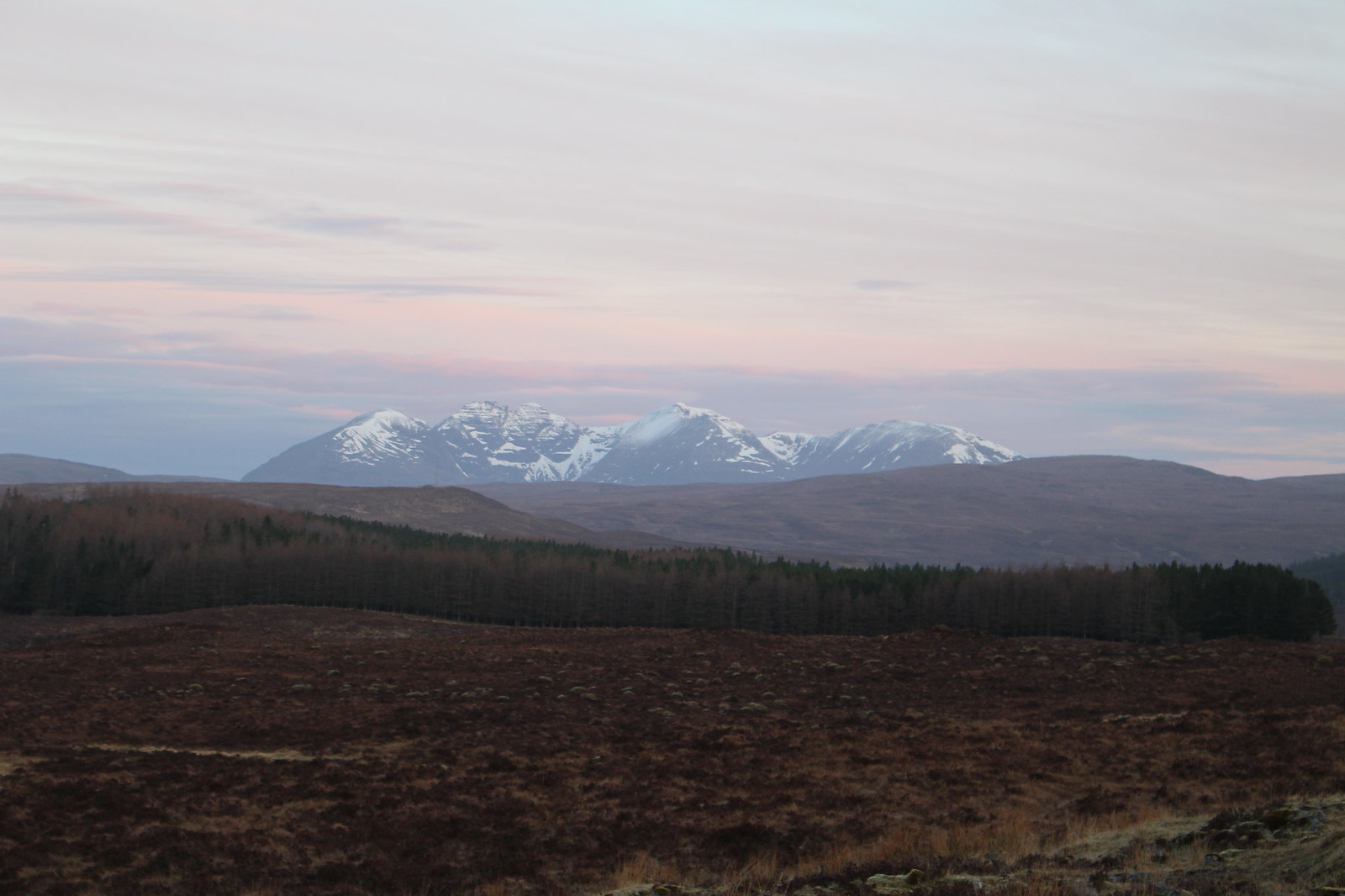 Arriving at Inverlael at 7 we were surprised to have been beaten there although the culprit was still there. It was here that I had a dilemma: crampons. My companion was not taking his. I always like to be prepared and going without went against everything I felt I should do…

but decided there was no point carrying the extra weight as we would have to turn back anyway if we encountered hard snow or ice. Decision made, we quickly booted up and set off, crossing the stiles at the end of the car park and up the track. It was at this point I felt a pull in my back and realised we had forgotten our sticks. Back we went, over the stiles again

Looking from the car park towards our goal 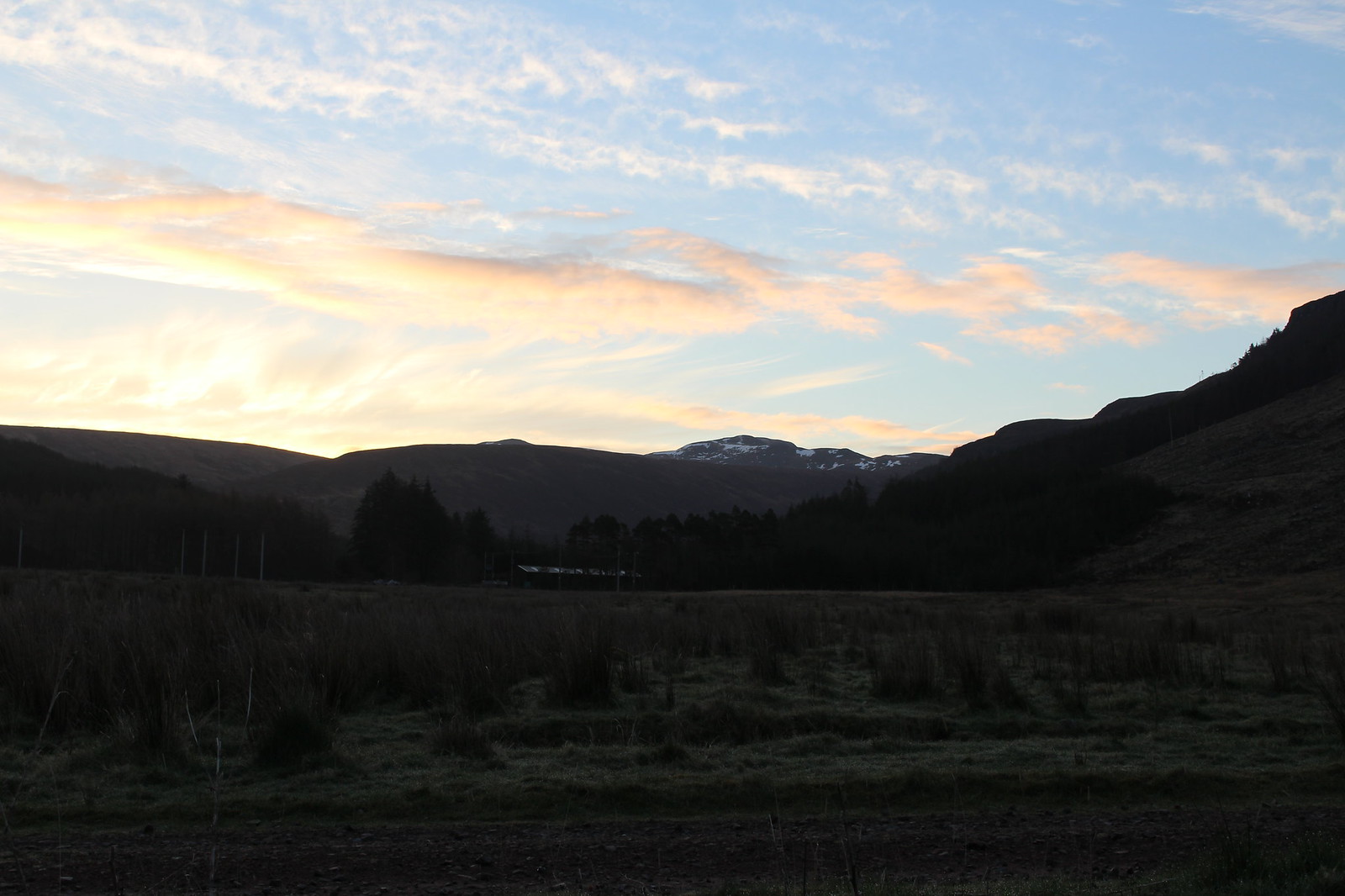 We instigated a quick march along the track, enjoying the gentle walk in and the good weather and lack of waterproofs. After the forest, the track narrowed and became a well-constructed path leading up the glen. Beinn Dearg ahead was looking impressive. 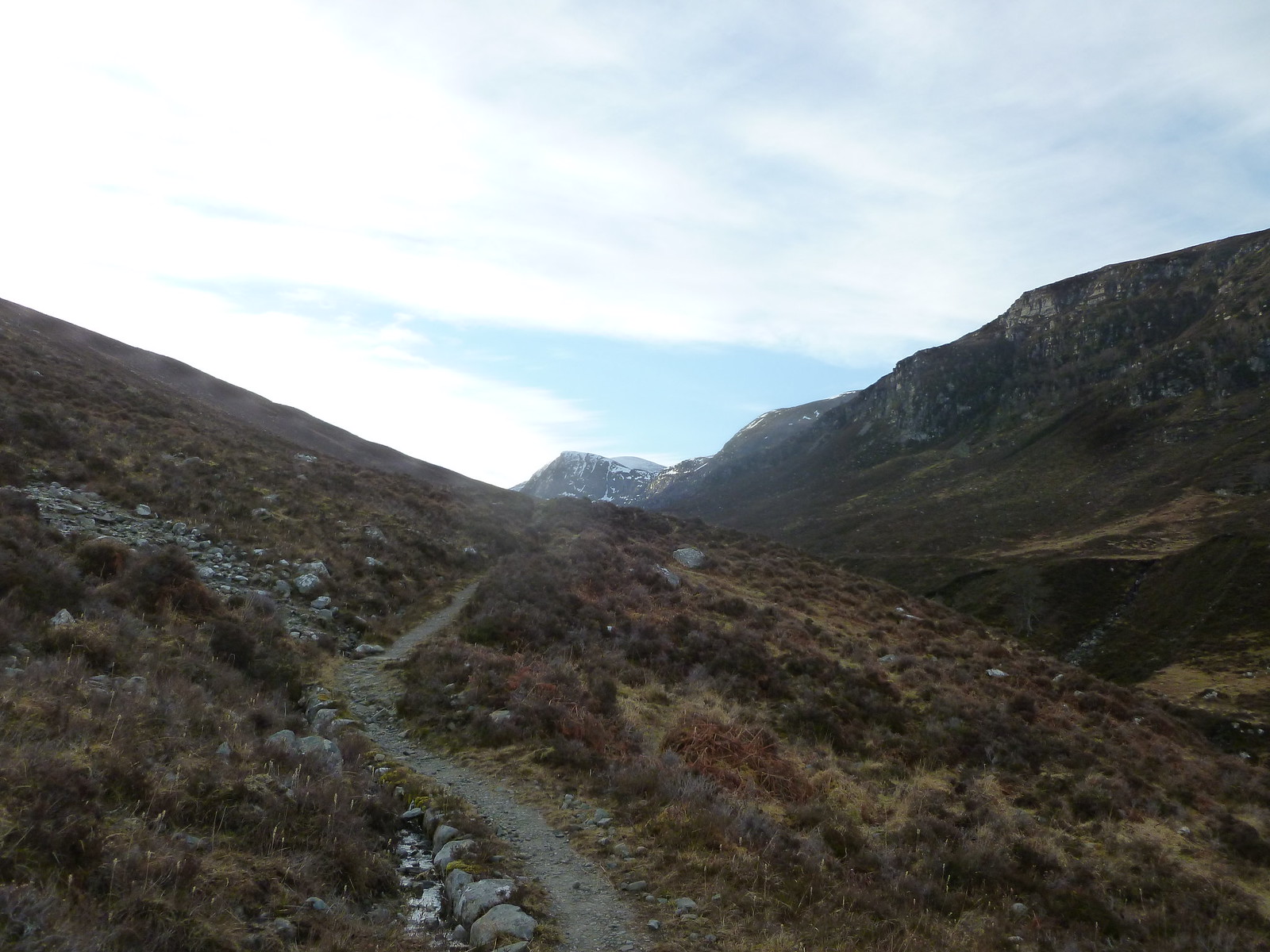 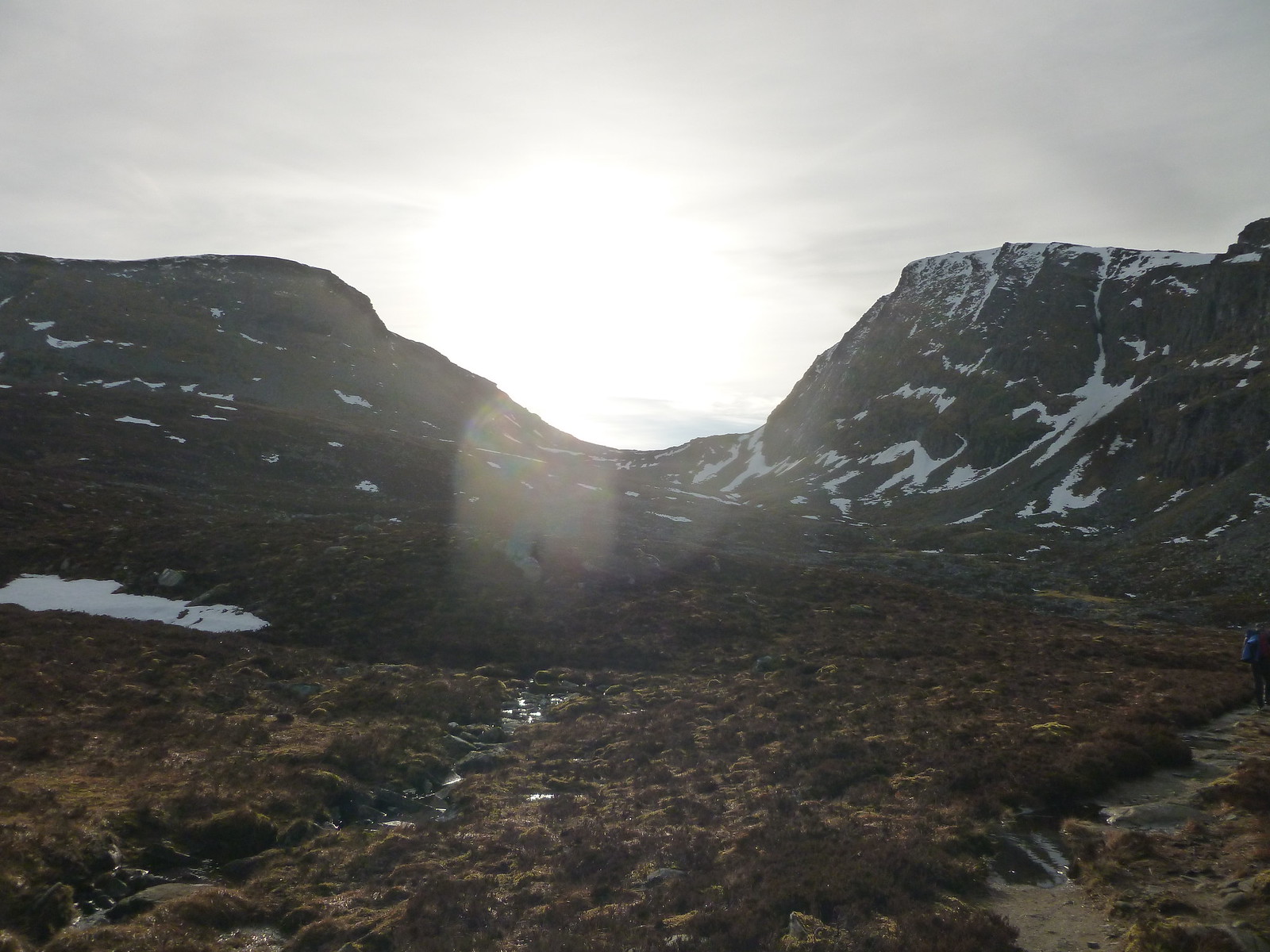 Looking back - stopping for a break! 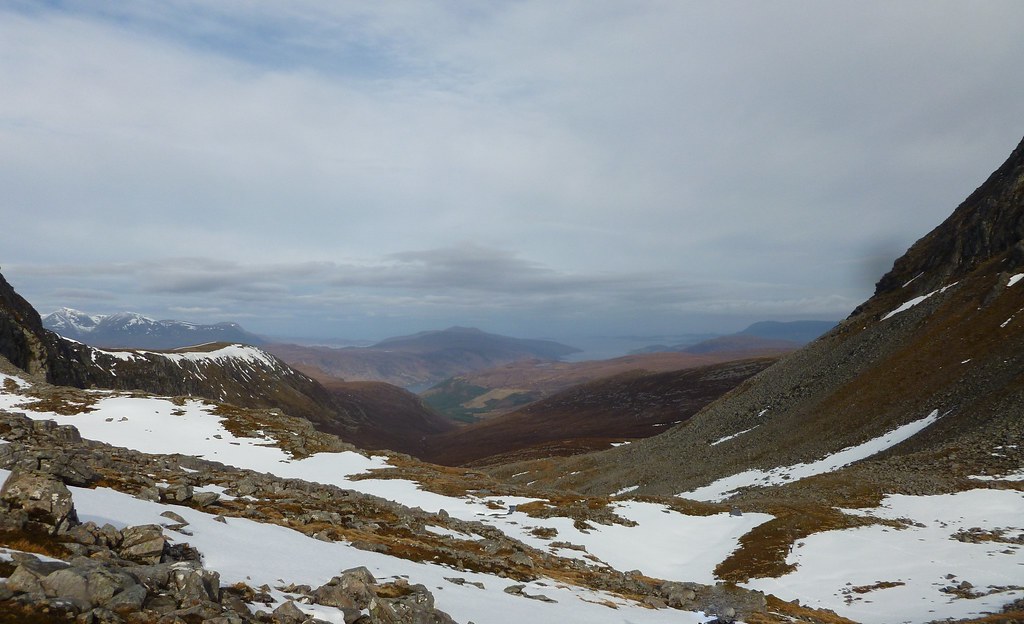 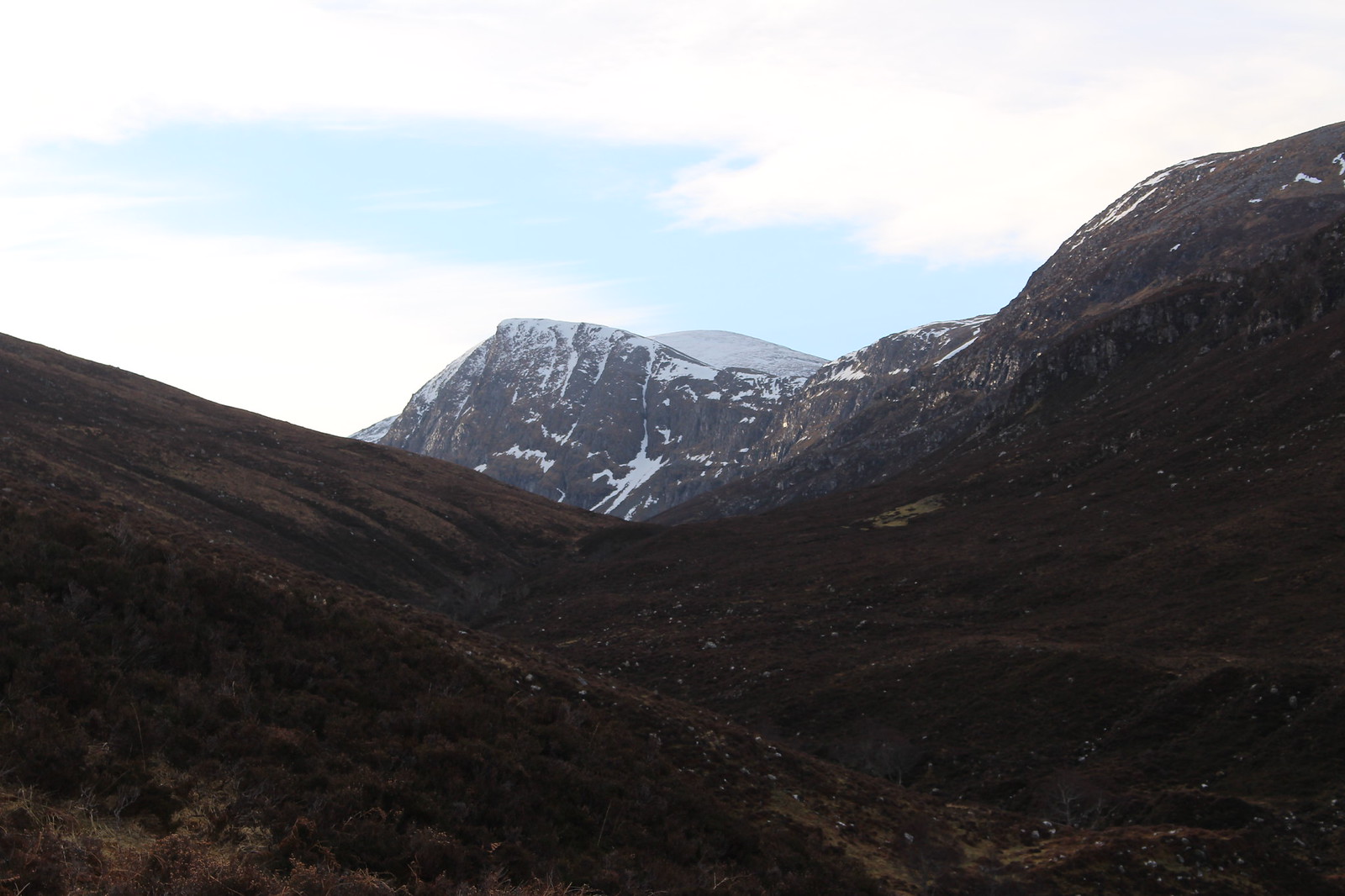 There was more burn jumping than I would have liked but we were enjoying ourselves, happy to be in the hills again. As we approached the bealach, the terrain steepened, the path disappeared under snow patches and we picked our way up through rocks. Reaching the bealach, we could see three of the summits for the day and some stunning views. I dosed up on ibuprofen here as my back was feeling a bit sore although I was enjoying the lighter pack.

Looking up towards Beinn Dearg, we could see the wall leading up the steep slope which was covered in a lot of snow. Thinking if we stuck to the rocks we should be ok, we went for it. Fortunately the snow wasn’t too hard and there was no danger, although it would have been easier with crampons!

Views across to Assynt 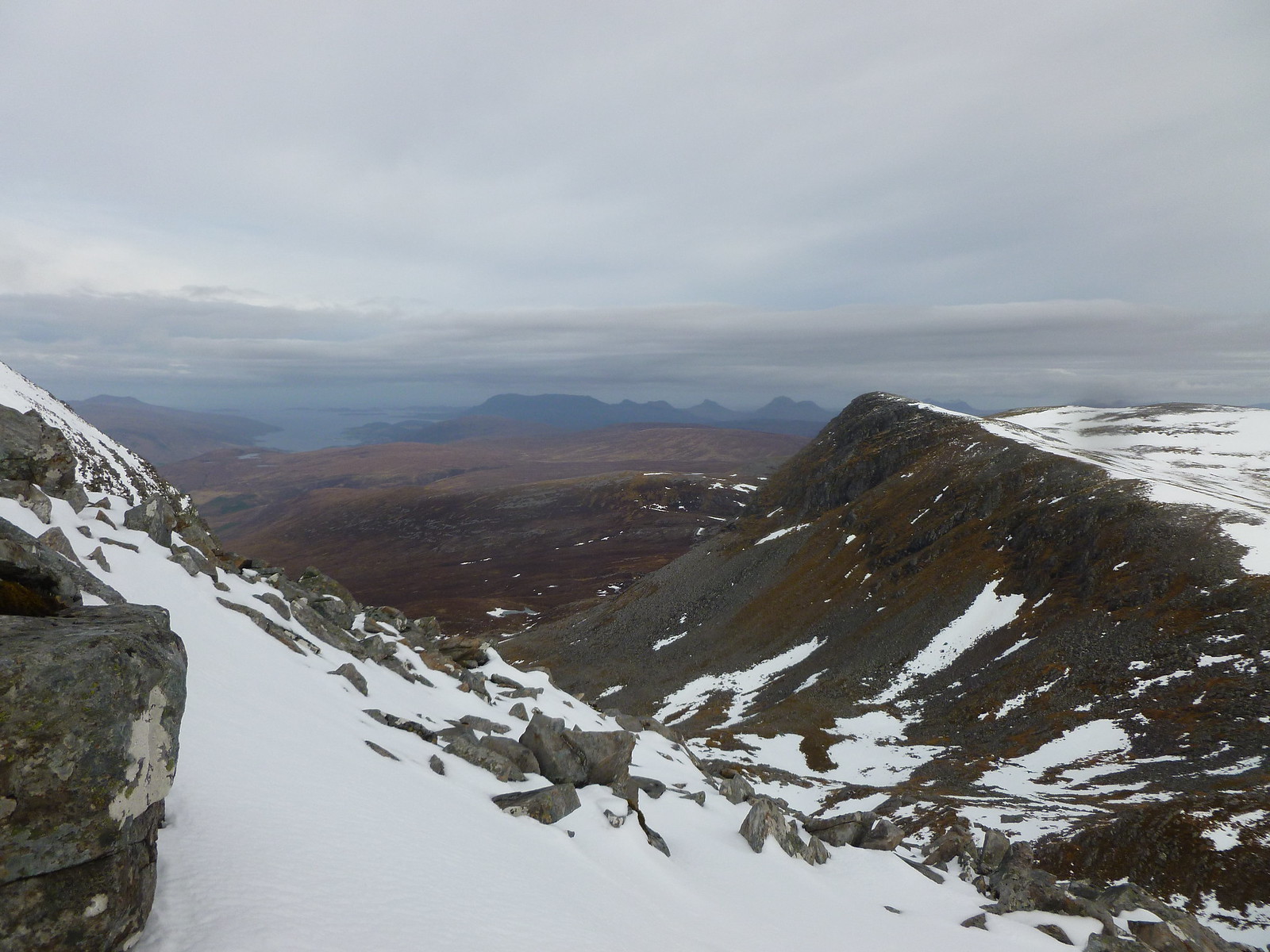 Seana Bhraigh in the distance 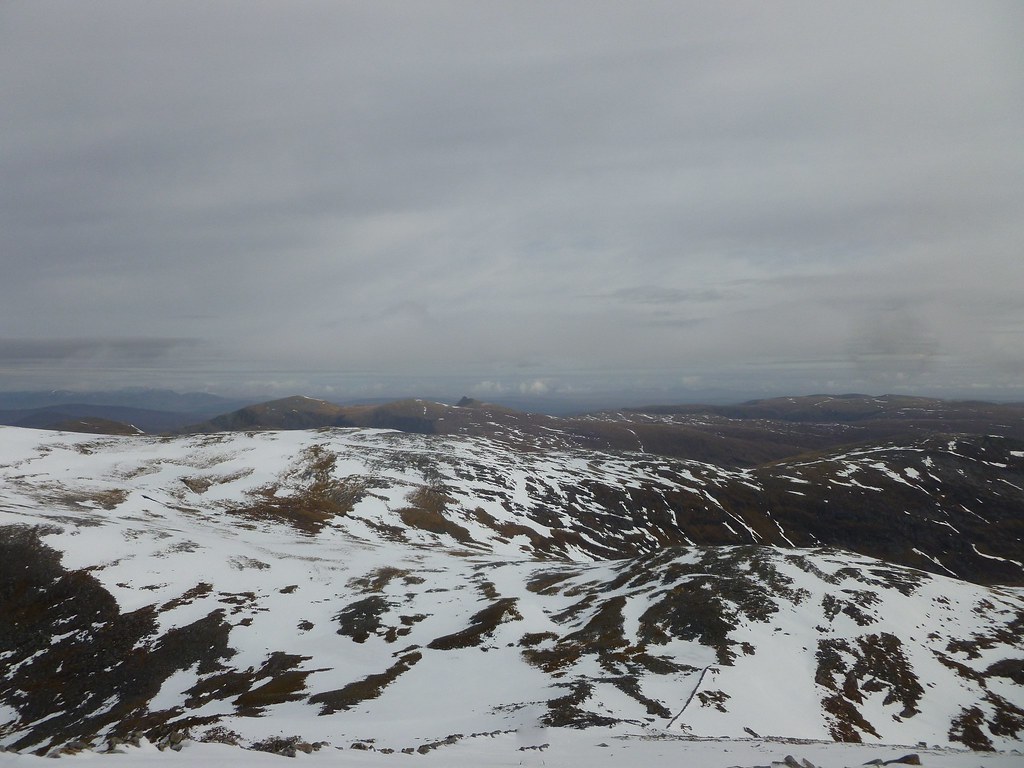 It was steep and took us a while; reaching the top of the wall we continued towards the summit. Unfortunately as we approached, the clag came in very suddenly and we were consumed by a whiteout. Reaching the cairn only a few minutes too late, we were cruelly deprived of the views of An Teallach 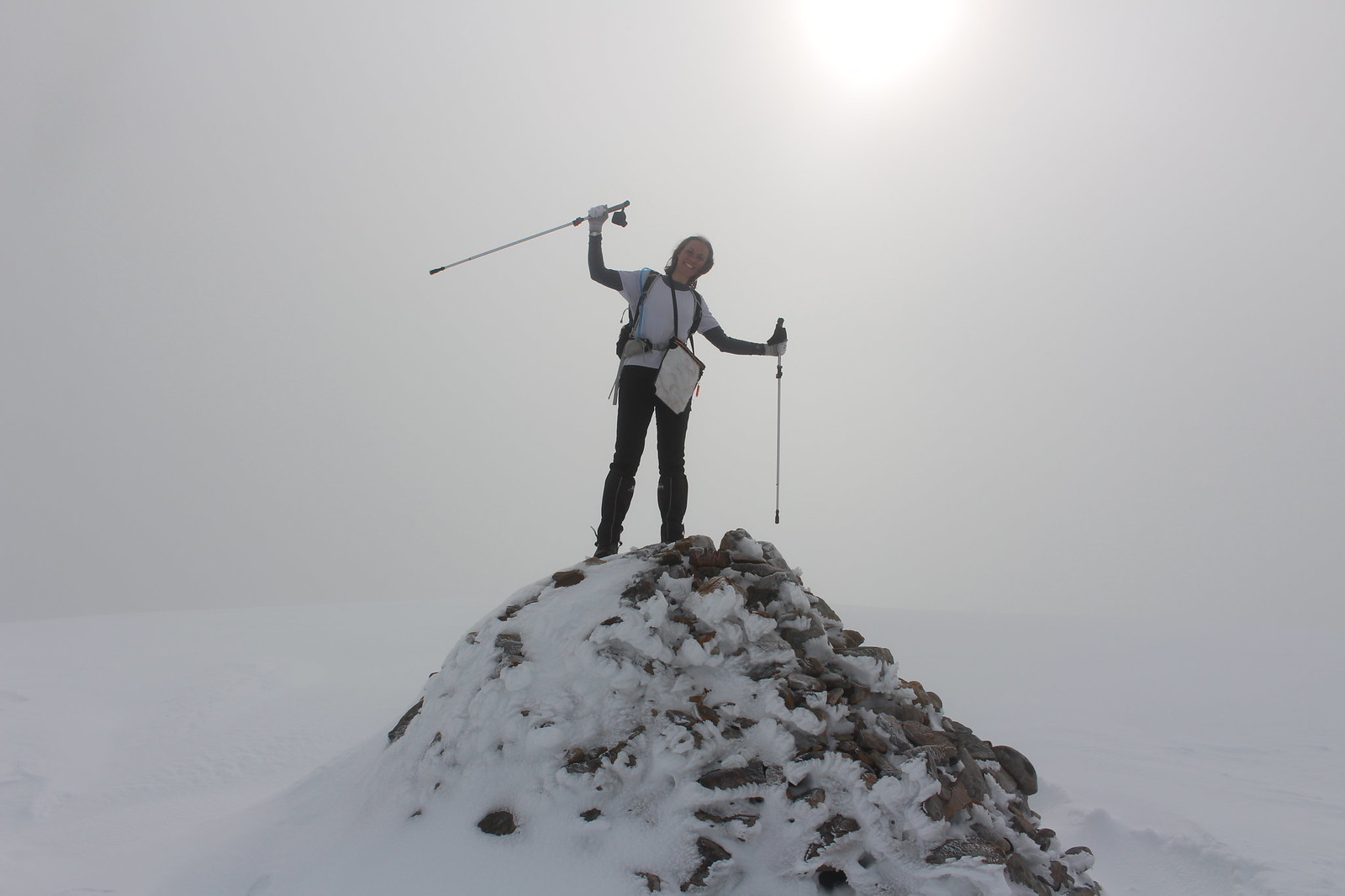 Disappointed, we headed back down and met the mysterious person who had beaten us to the car park near the top of the wall. He was wearing crampons… After a quick chat we continued down, finding it much easier than coming up, although being careful to dig our heels in well. Reaching the bealach we were back into good visibility, but the top of Beinn Dearg was still in clag (and remained in it for the rest of the day). 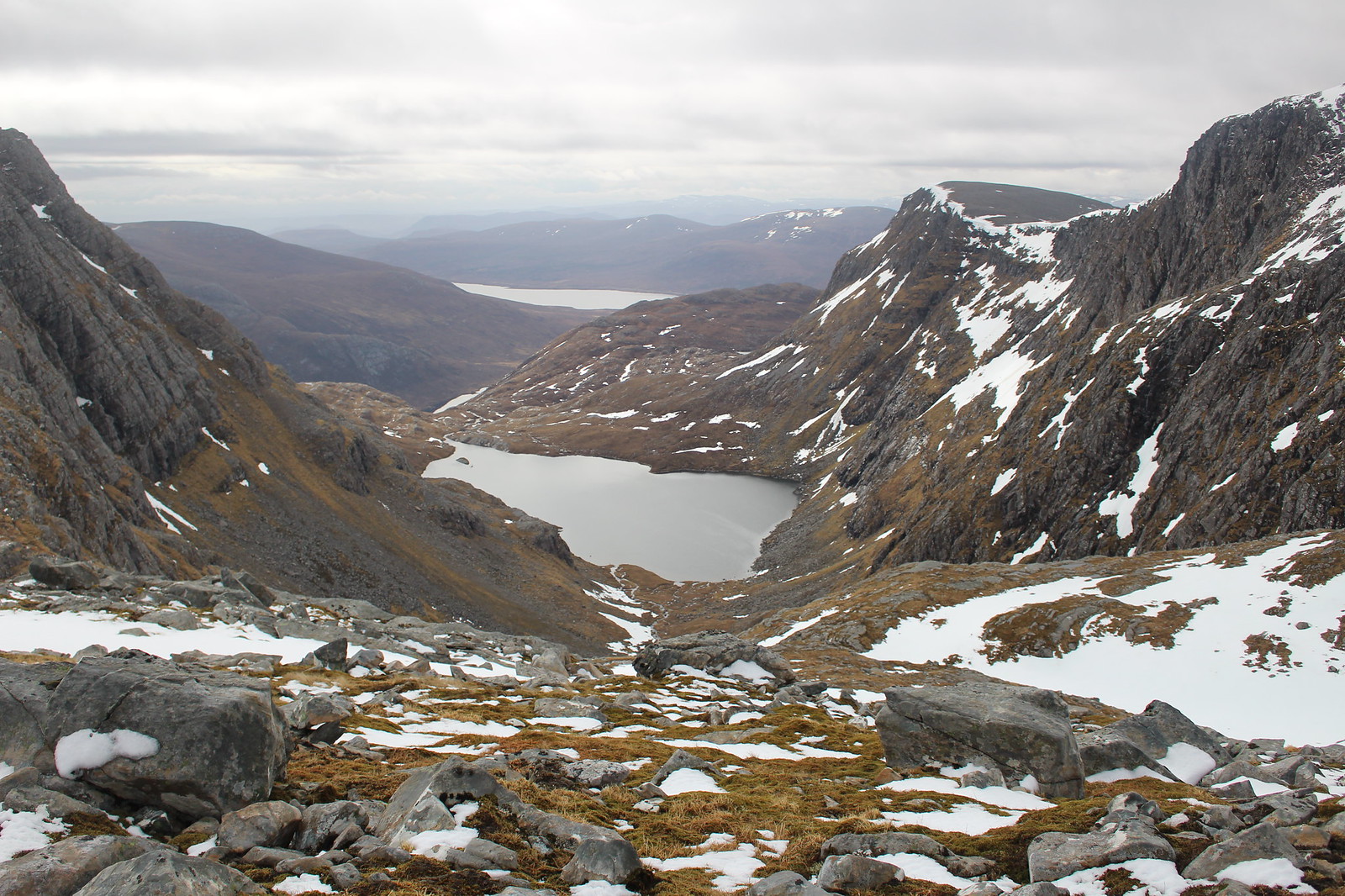 Heading across towards Cona Mheall we skirted round some steep bits of snow and headed up the pull to the top. It was steeper than it had looked from afar and it was full of large uneven rocks. It was around here than someone realised that he had forgotten his sandwiches

We were overtaken by our quarry and I caught up with him at the top. I was recognised as Jaxter which made me feel like a bit of a celebrity!

It was nice to meet you dude 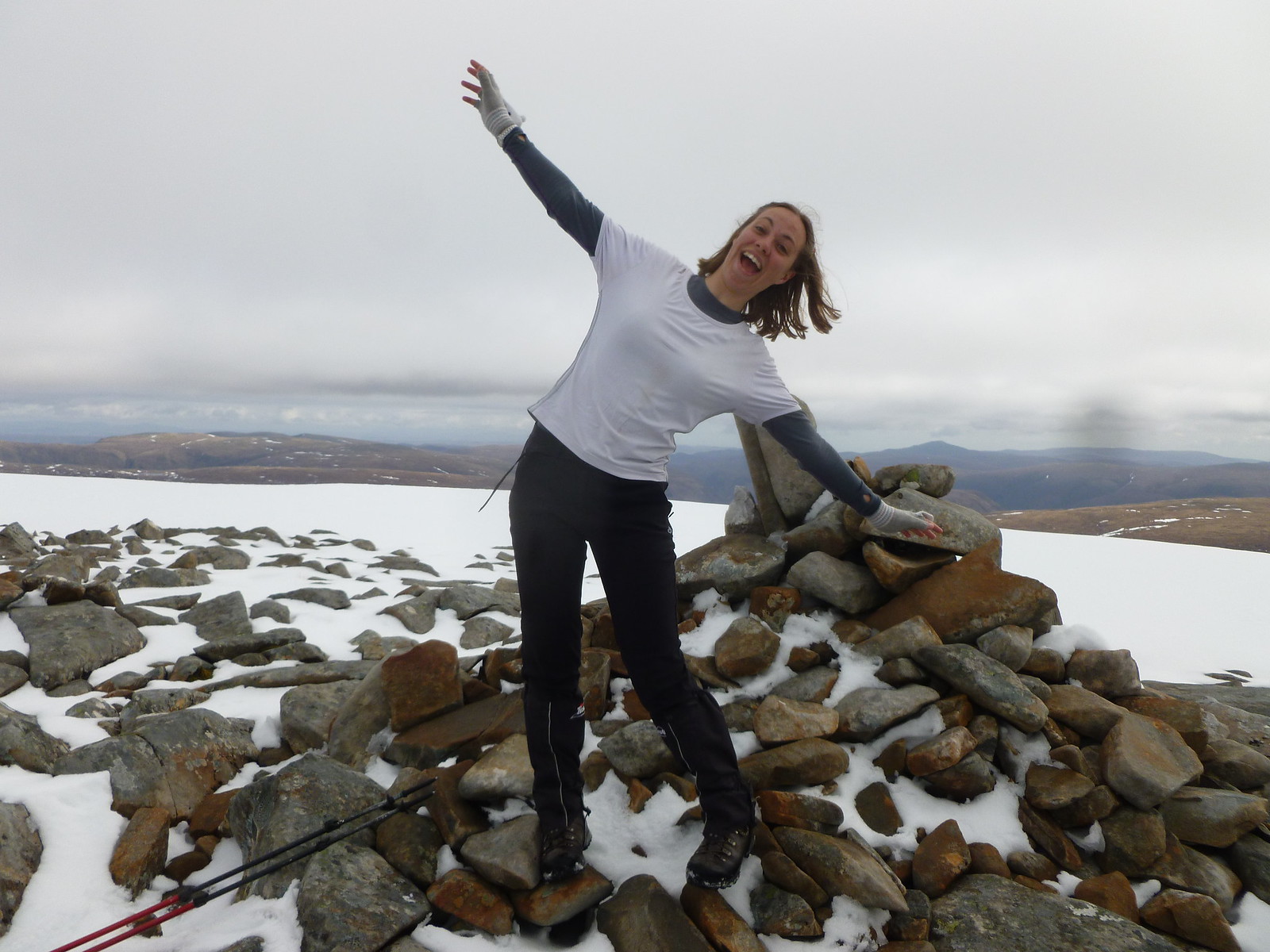 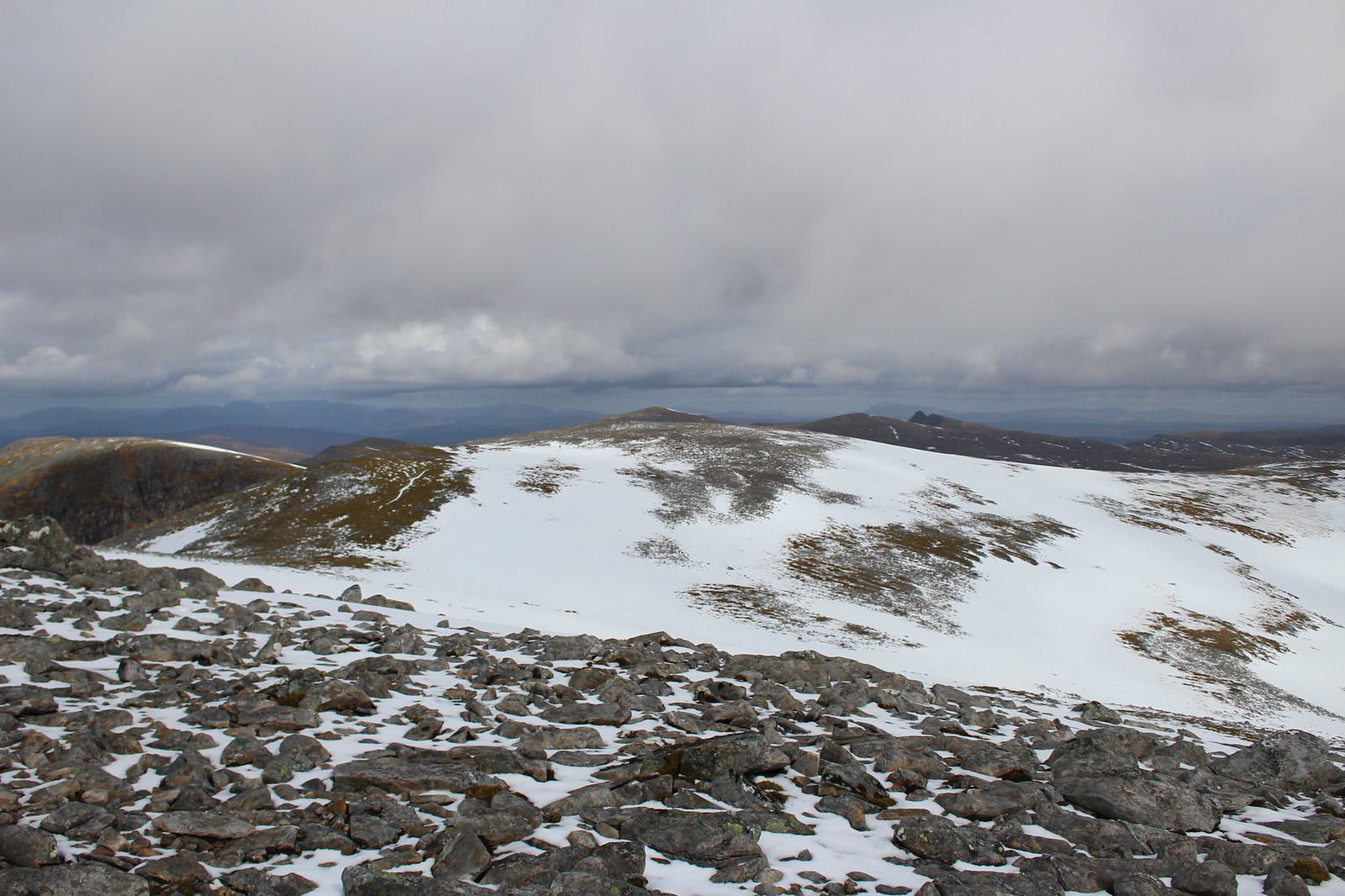 After enjoying the views we set off again, heading towards Meall nan Ceapraichean. We paused for a fuel stop on the 884 top before the final pull up to the summit. 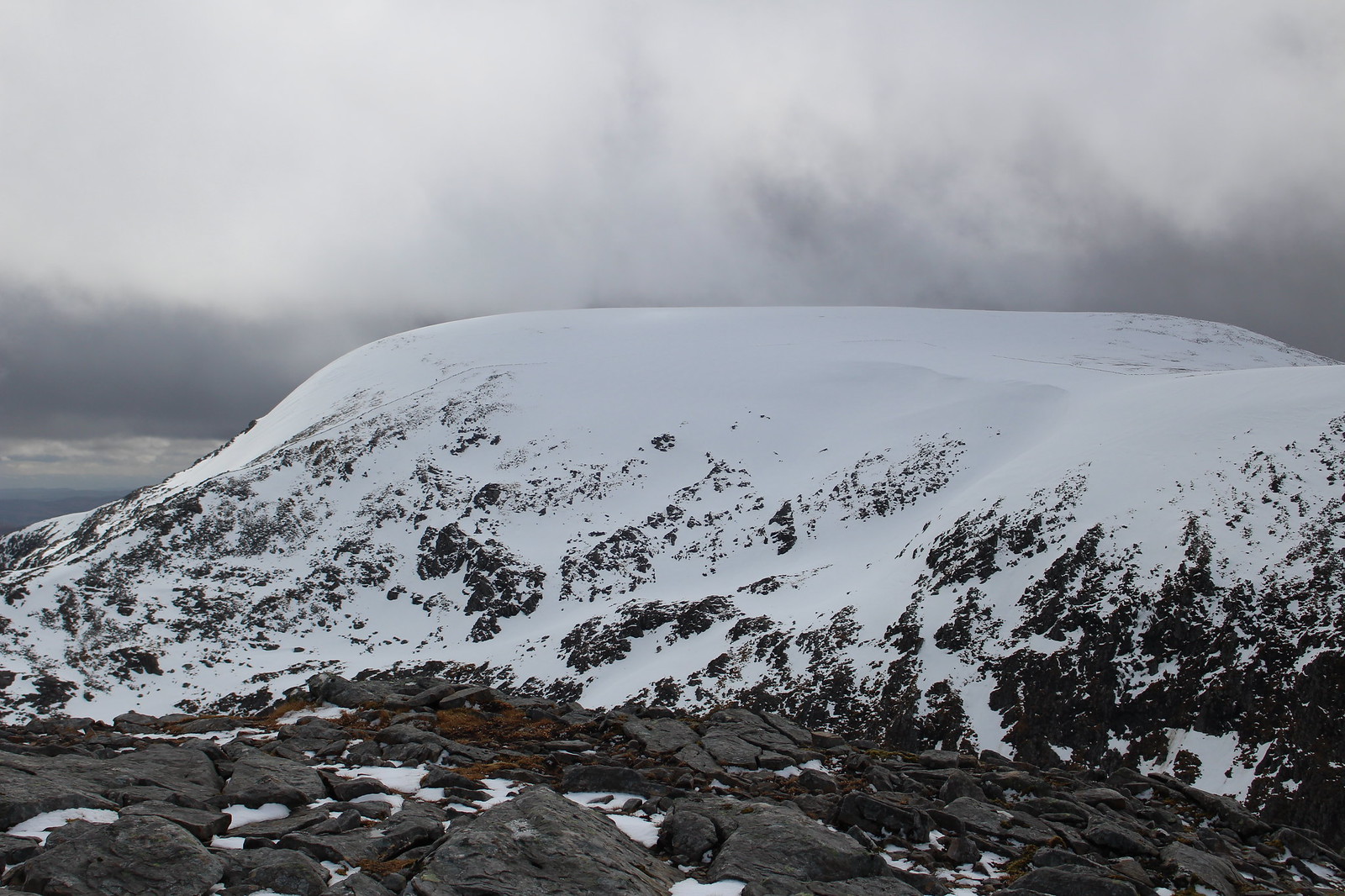 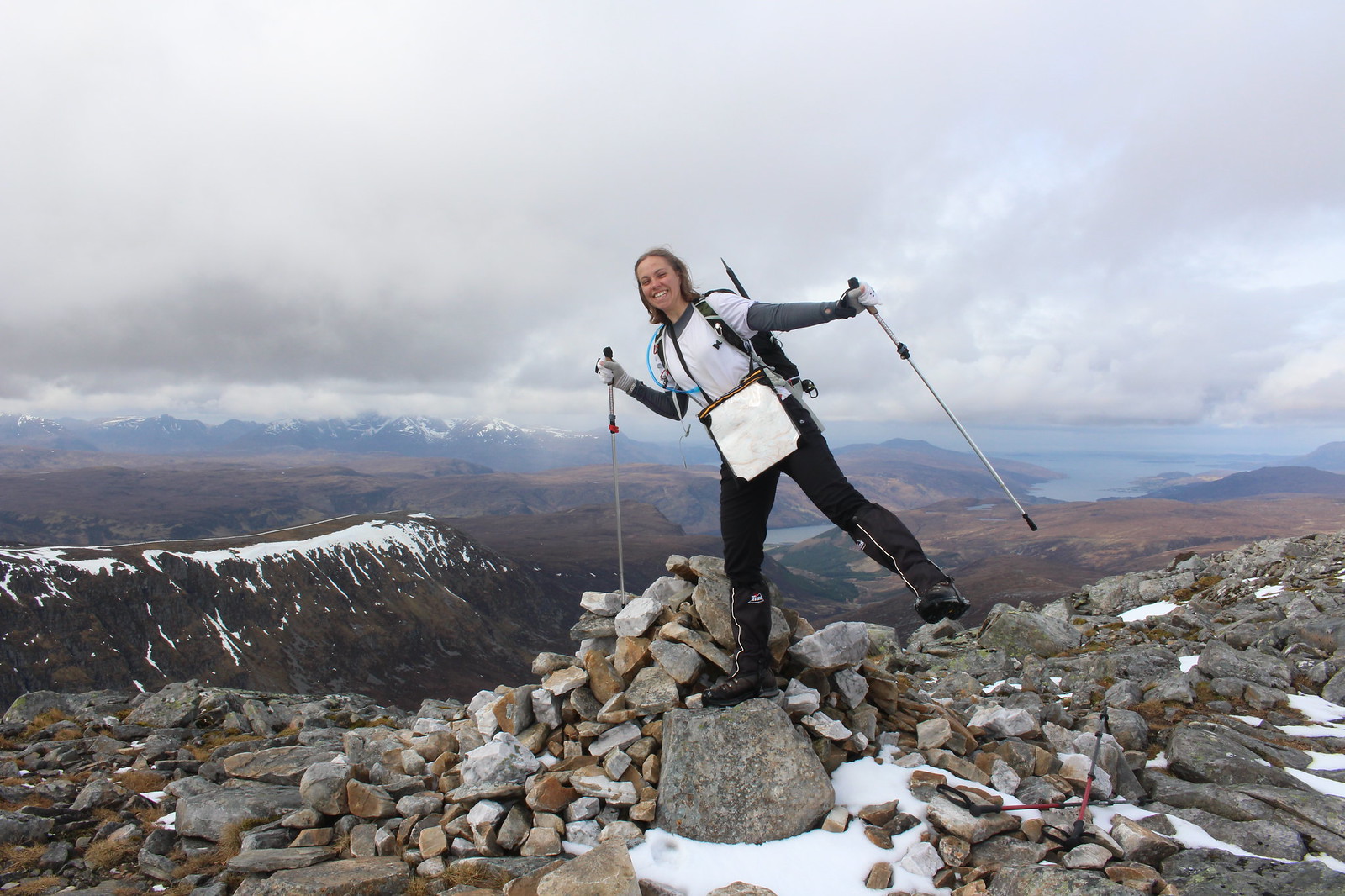 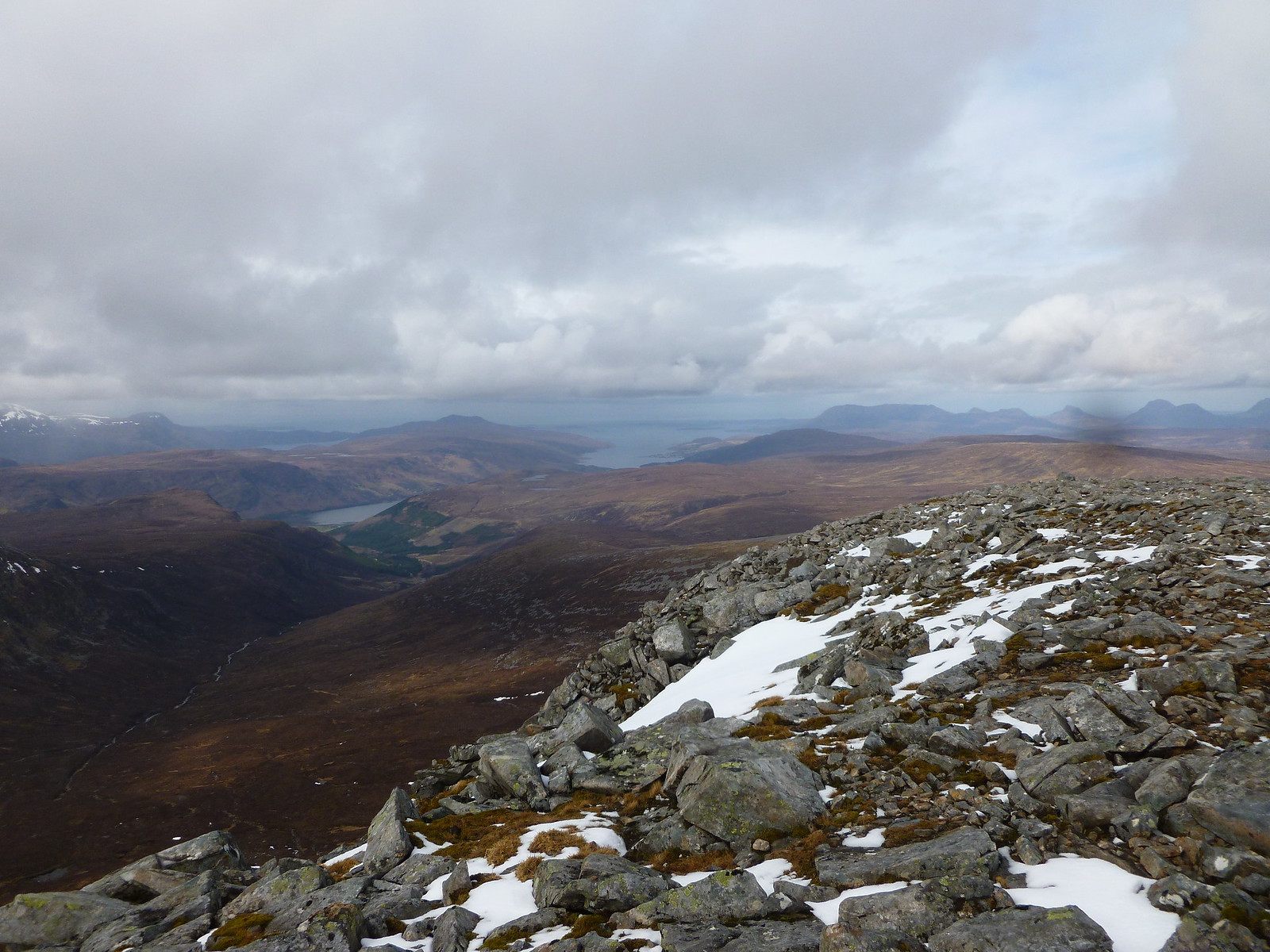 We again enjoyed summit views and feasted on jelly babies before heading towards the sub top Ceann Garbh and bearing right towards the bealach. This felt like a long way down and we could see the long pull up the other side to our fourth munro of the day, Eididh nan Clach Geala, nicknamed Eilidh for the day. 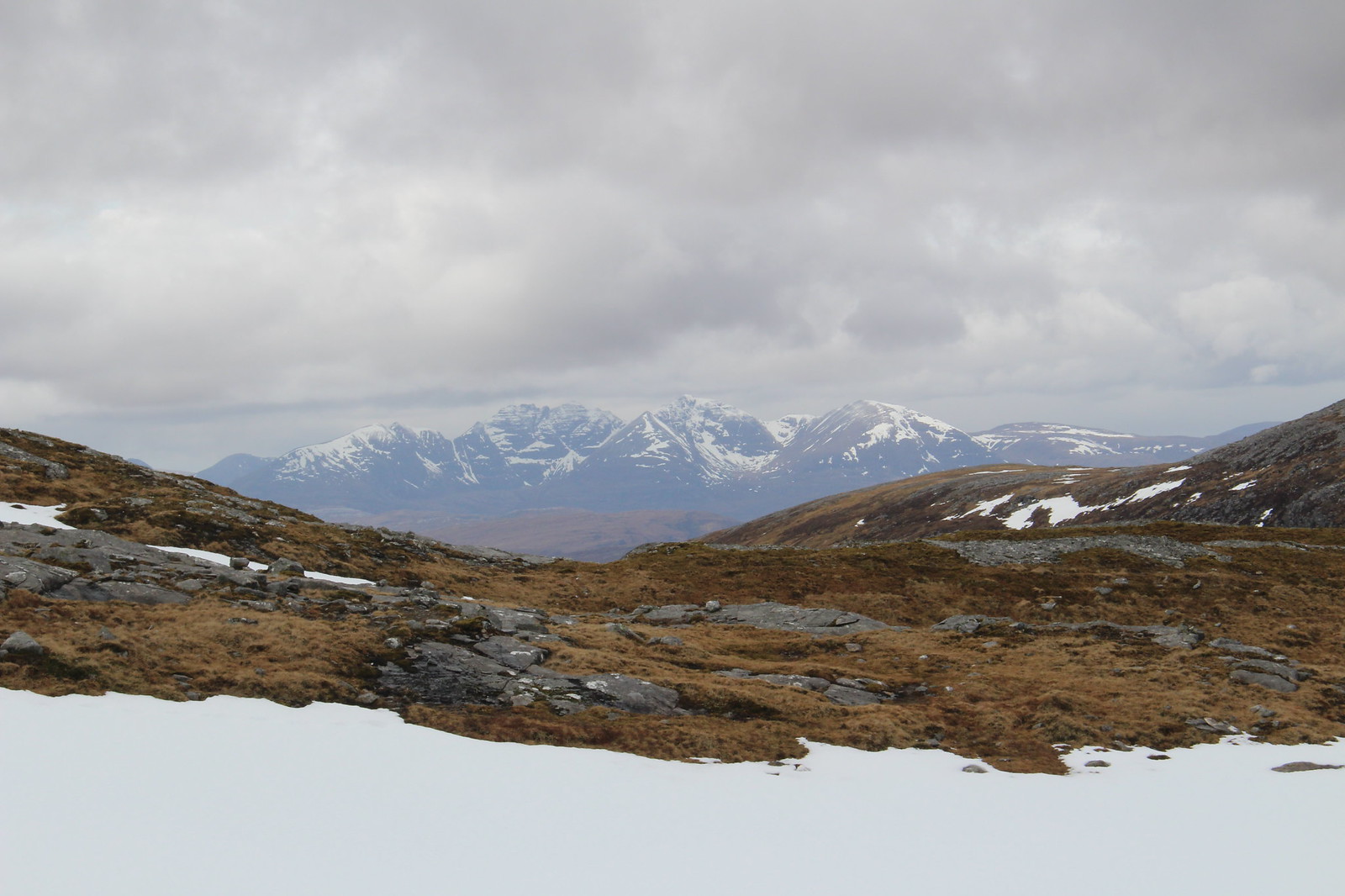 Skirting round the steepest of the snow, we went for a bum slide. Mine was less than dignified… 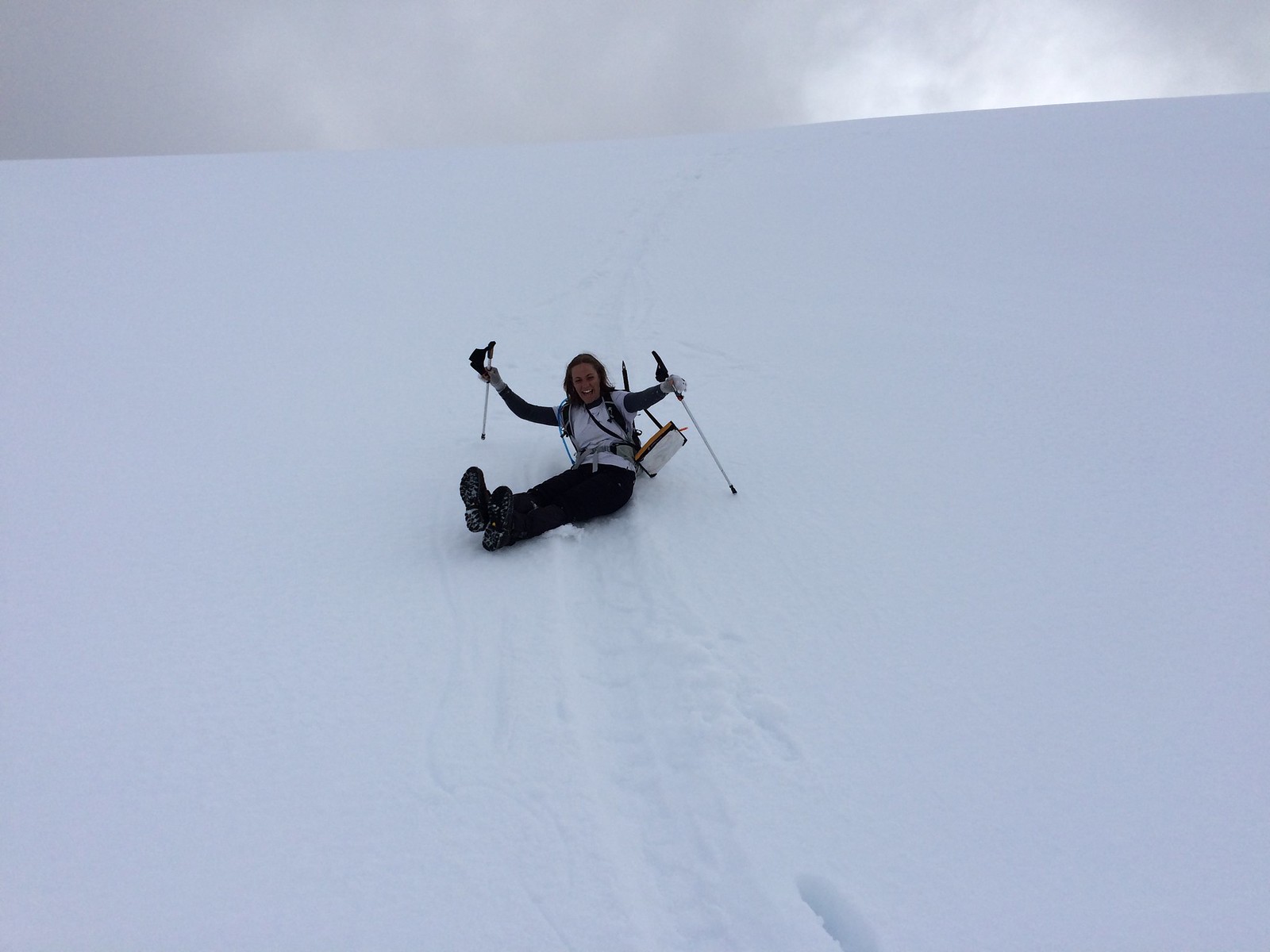 Making our way across the bealach, we found ourselves crossing a bog and it continued to be pretty soggy as we went up the long shoulder of Eilidh. About 2/3 of the way up the clag came in and it started raining. This quickly turned to snow and we paused to put on waterproofs. Feeling that this may be the nail in the coffin of our trek round the Seana Bhraigh we continued up. Reaching the top we caught up again with our pal from earlier.

Me chatting to our pal 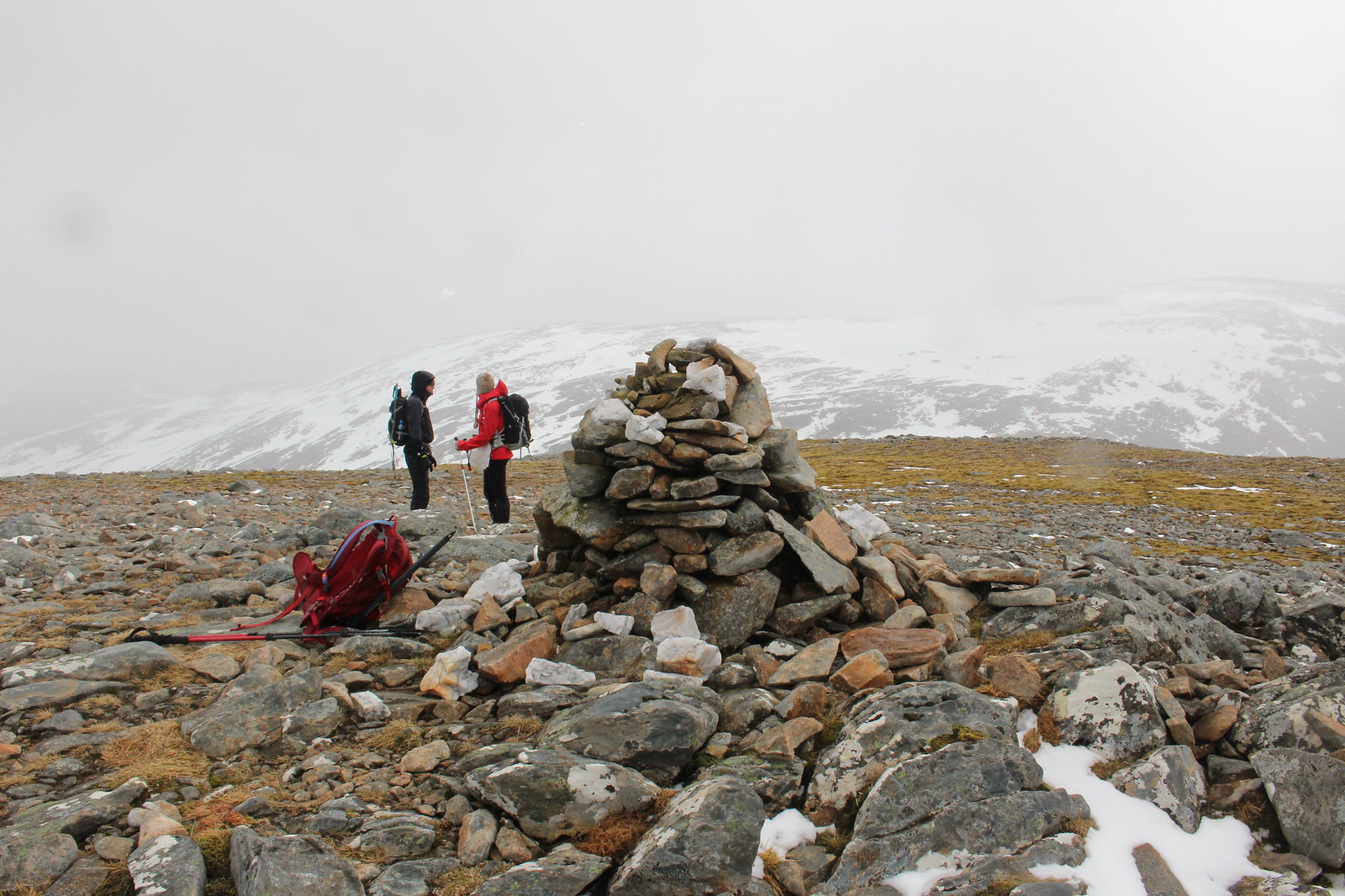 He had decided to give the extra summit a miss too and was heading back to the bealach for the long trip back down. We posed for pictures and shared my sandwiches. This was 71 for me – my 25%! 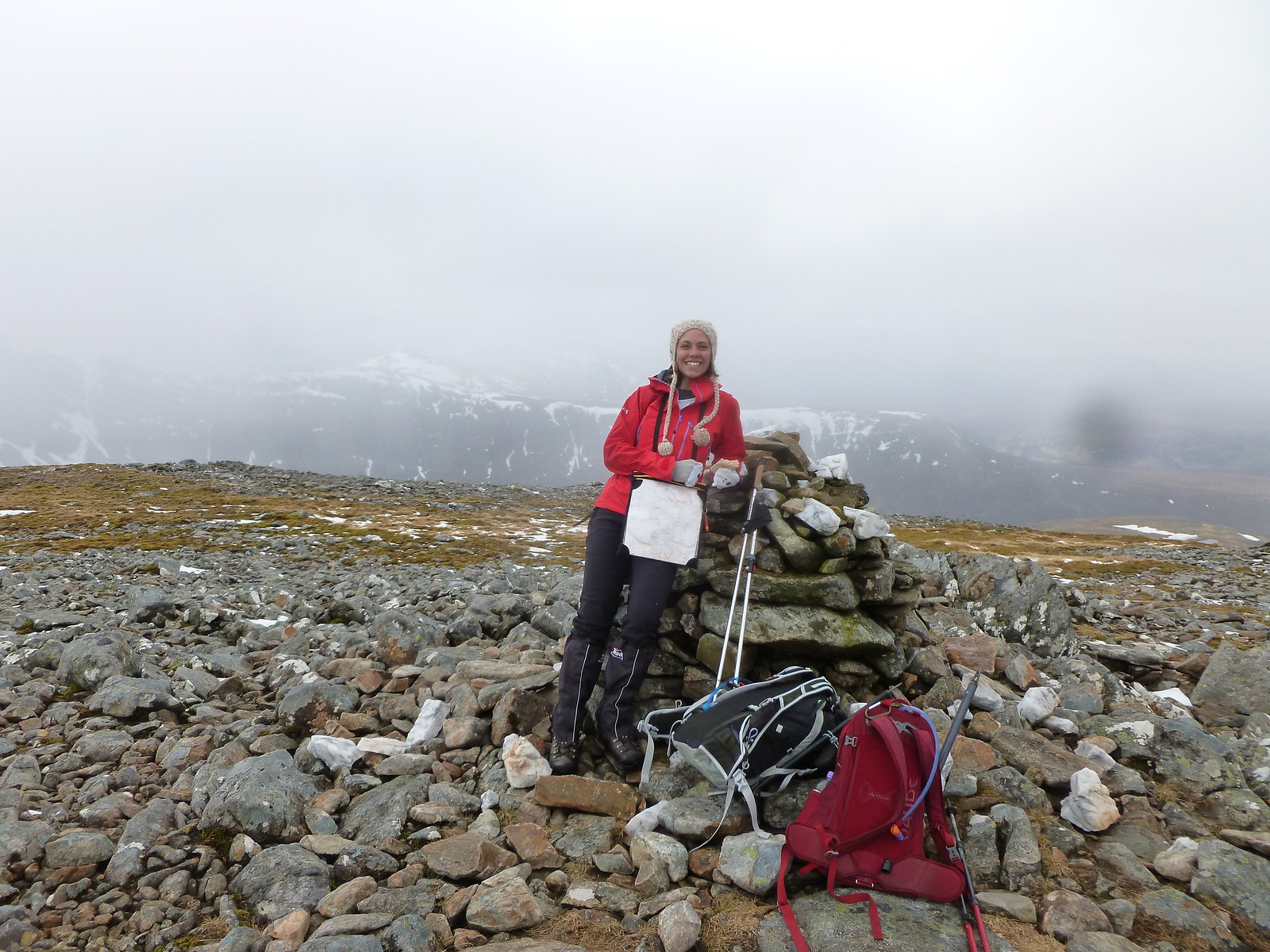 It was decision time – Seana Bhraigh or not? It hadn’t looked an impossibly long way when we could see, but the visibility had gone and it was snowing. We thought it had probably closed in for the day and decided that SB was a mountain for another day. We elected to head down the ridge from here – didn’t fancy going all the way back to the bealach and an even longer walk out.

Heading down out of the clag 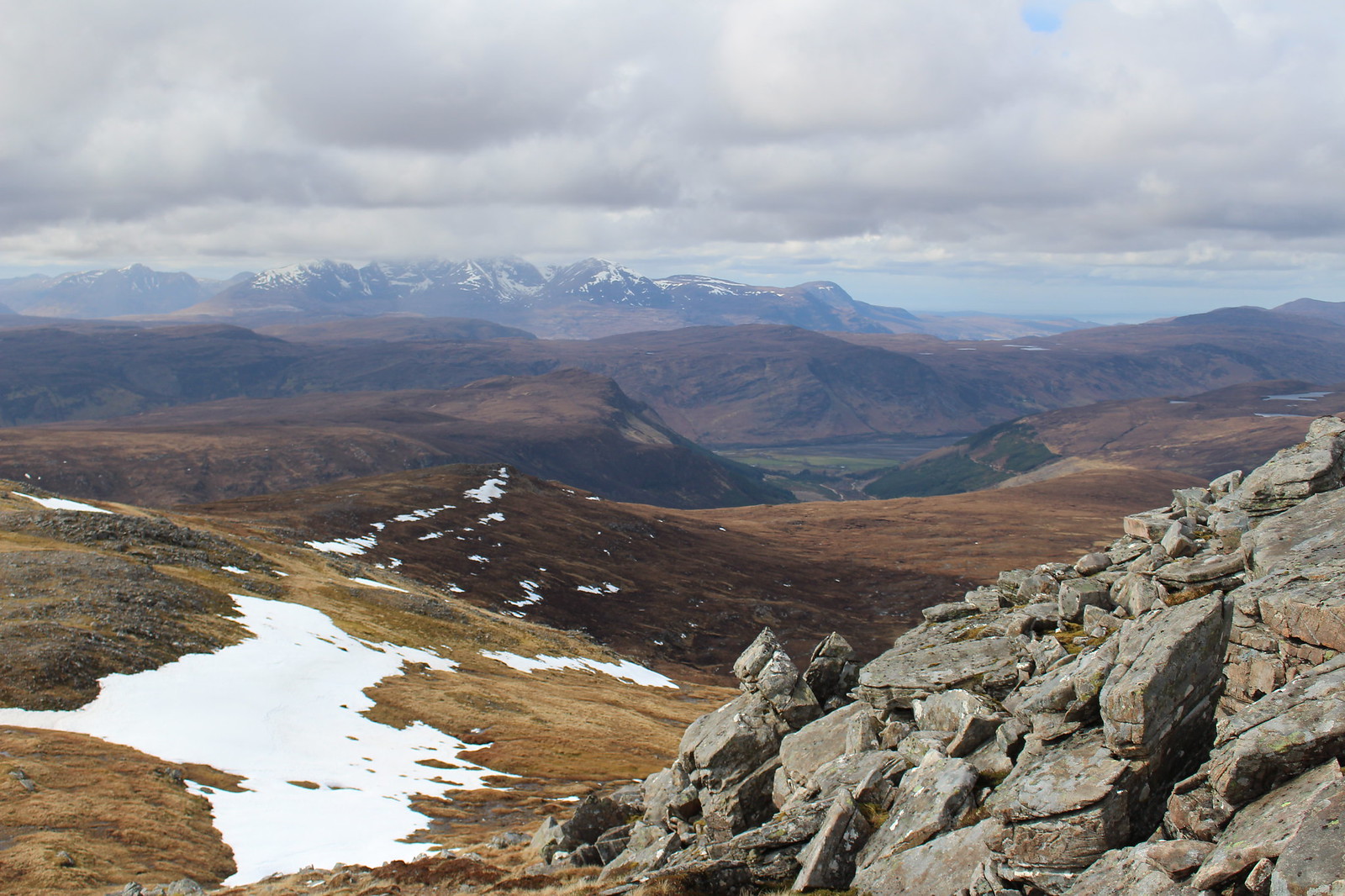 Heading initially across boulders then down steep grass, we made the ridge, headed for the lochan and then went down left down towards the path from the bealach. This path eventually joined up with our original path from the start although fortunately after all the river crossings! Bingo!

Back to the bealach - still looking a wee bit murky 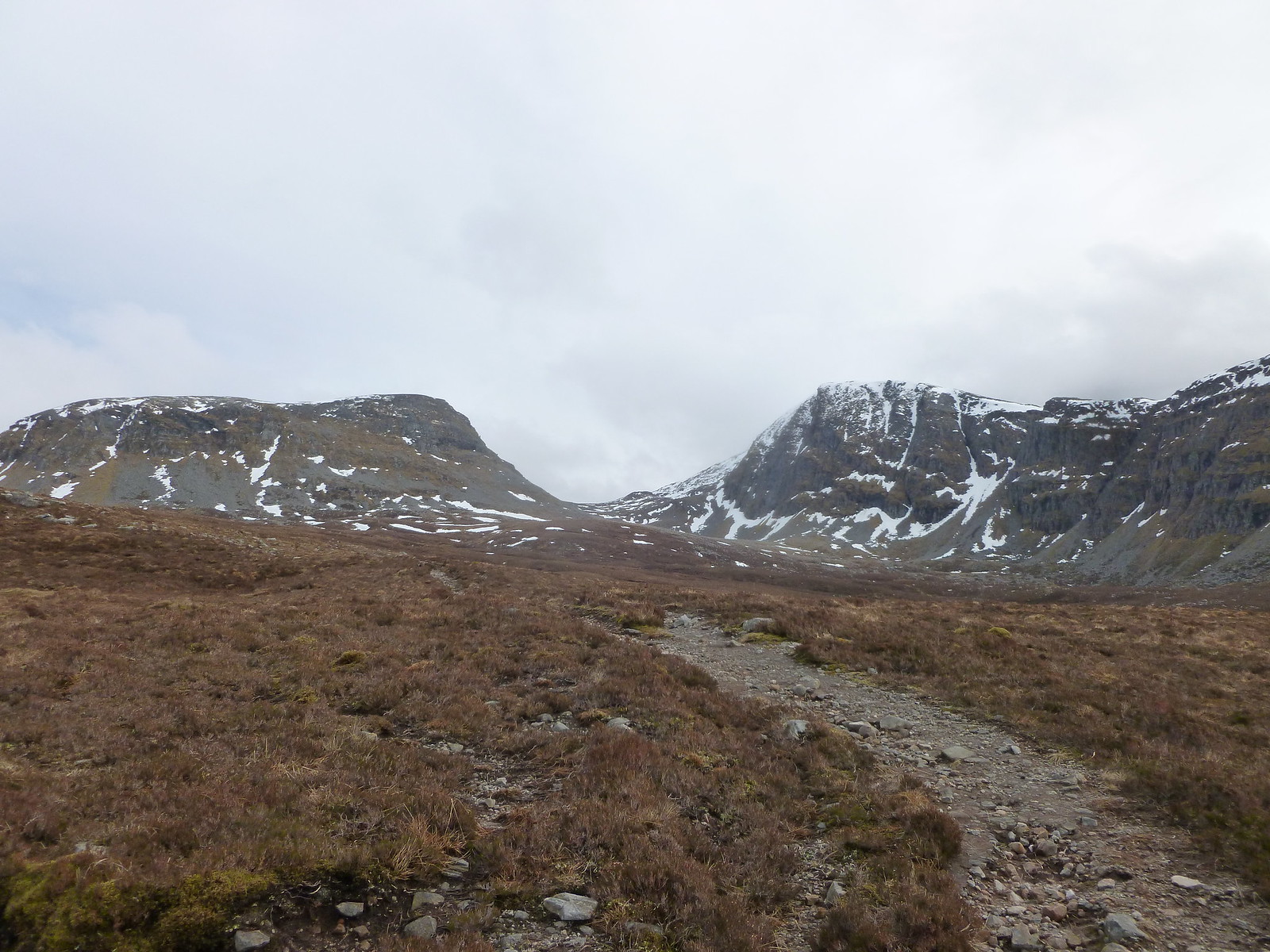 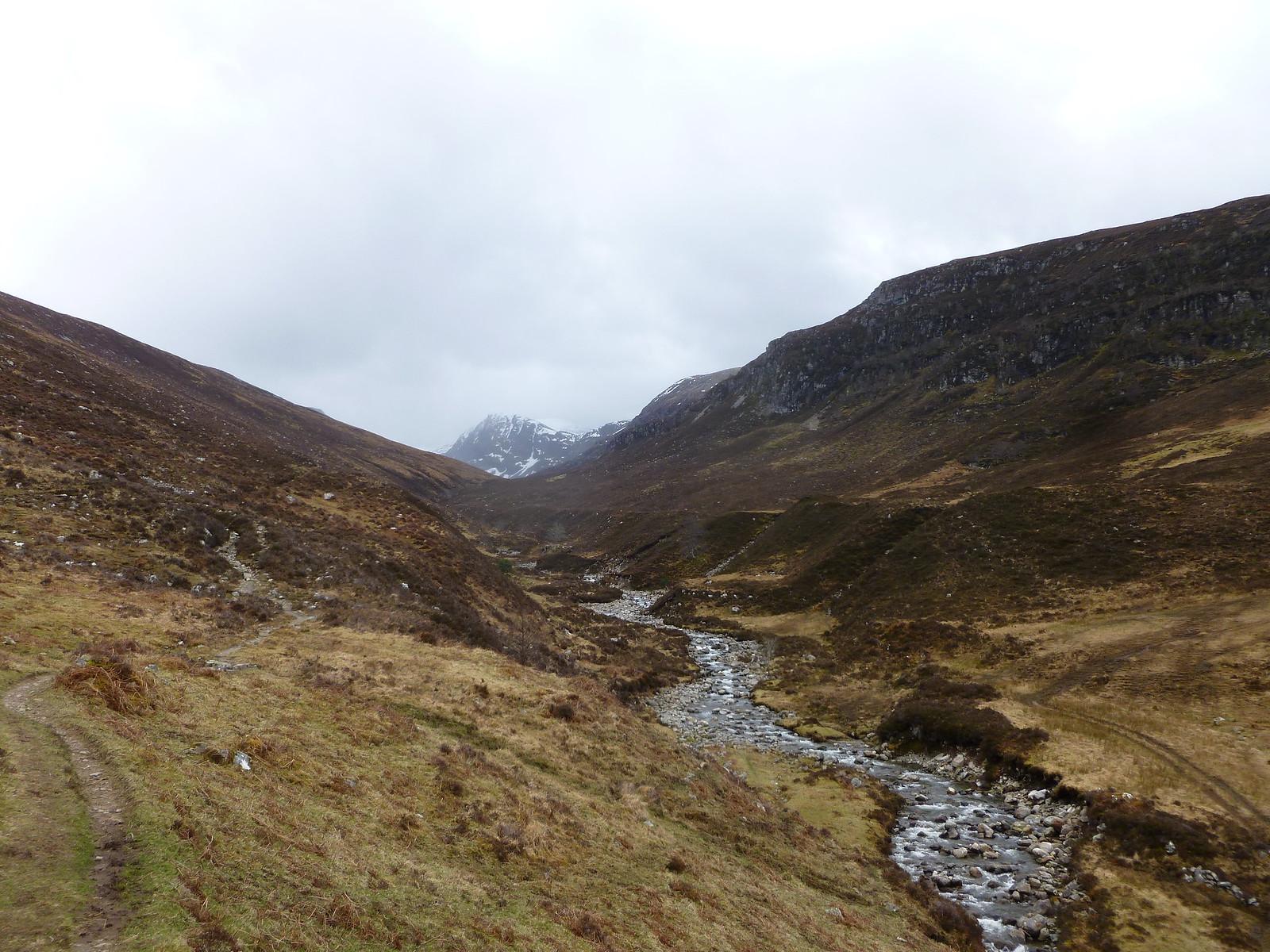 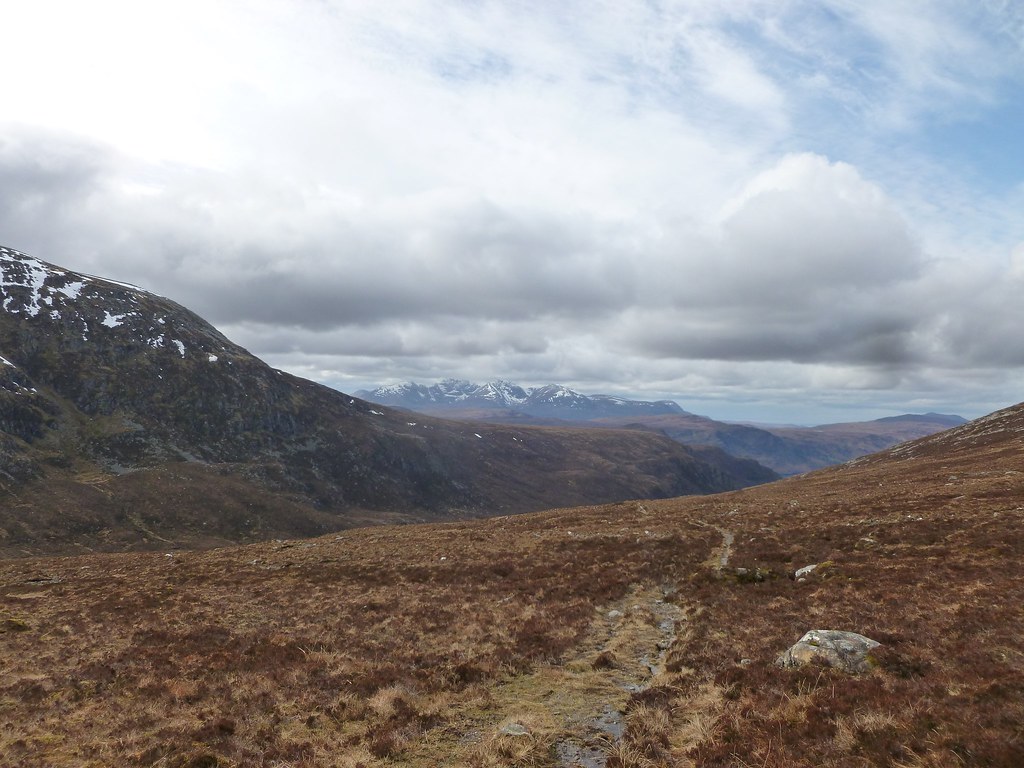 Climbing over the stiles into the car park was hard work and we were relieved to get back to the car. Looking back up the glen, the tops had cleared and it looked like Beinn Dearg might even have finally cleared, but we decided that it was probably still a good decision as we had two more days of walking and it would be good to get to Gairloch before it was too late, especially having seen Gary’s message about lack of car parking the night before – the race for a parking space was on!

It was good meeting the two of you. I was just glad to be able to keep up not having been out much this year. I should apologise for not offering to take a picture of you both.

alyg95 wrote:It was good meeting the two of you. I was just glad to be able to keep up not having been out much this year. I should apologise for not offering to take a picture of you both.

No worries - we are pretty good at selfies

I'd be up for that! I think I need to get a bit fitter before I can manage the 9 though...

Looks a great round of impressive hills. I'm hoping to do these next month so I was interested to read your report. Looks like you had a lot of fun (though Hugh seemed to be struggling to keep up with you at times!). Nice photos.