One for the bog trot fanatics - WH Meet

One for the bog trot fanatics - WH Meet

To kick off the WH meet at Gairloch early and make the most of the location, Martin (mg1976) offered to head NW early too. After a few emails we had agreed to meet up with Karen & David in Perth at 7am, we would then endure the camera's on the A9 and pay Dobbie's in Inverness a visit for breakfast. I was planning to have the full 10 items as that would then keep me going all day

As Dobbies doesn't open till 9am there was no rush, which was just as well

Karen and David were planning to tackle one of the smaller hills, whereas Martin was keen to increase his Munro tally and considering he hasn't been anywhere near a Munro for ages. He has been jogging round York in an effort to get/stay fit and it seemed to pay off as he managed 3 tough days, which included 3 Munro's and a Corbett

We arrived at the layby on the A890 just along from Achnasheen and set off at 11am. Things didn't look too promising as the cloud was rather low and it was drizzling. Having read the WH walk description I was expecting the ground to be boggy and I had already decided to wear my old boots. They are kind of expendable and to give you some idea of how wet they got, they were in the drying room at the hostel from Thursday afternoon through till Sunday morning and they were still damp.
For the record I would like to report this was the first time I had utilised my waterproof trousers since the last WH meet at Torridon 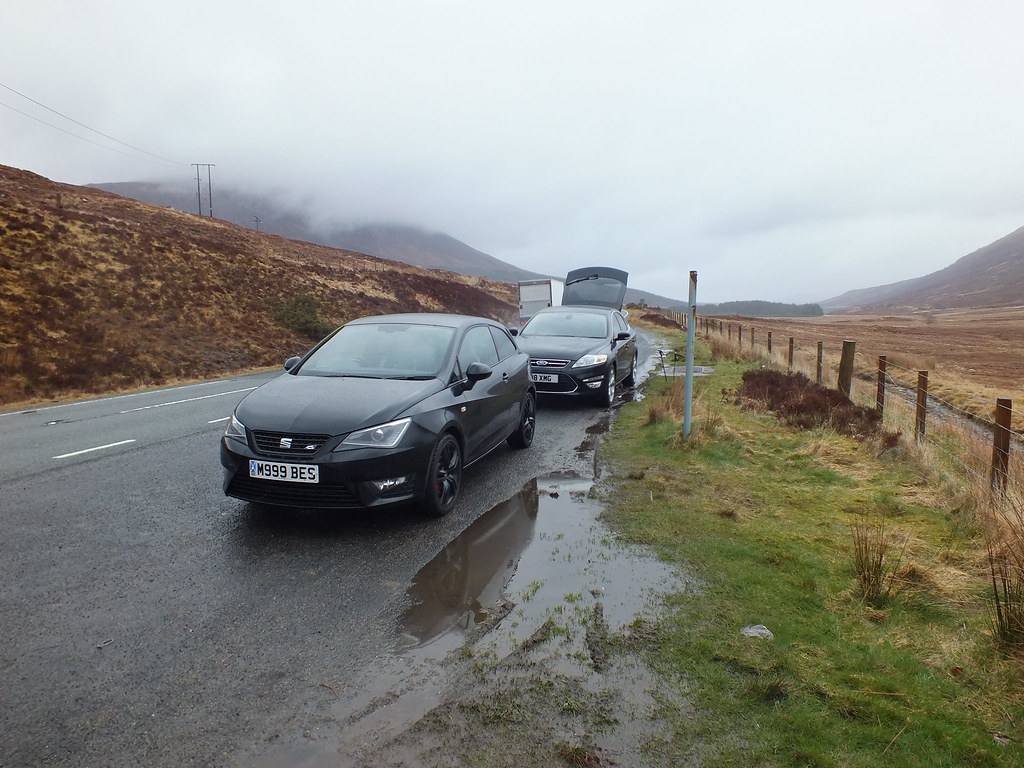 Even the layby has a puddle 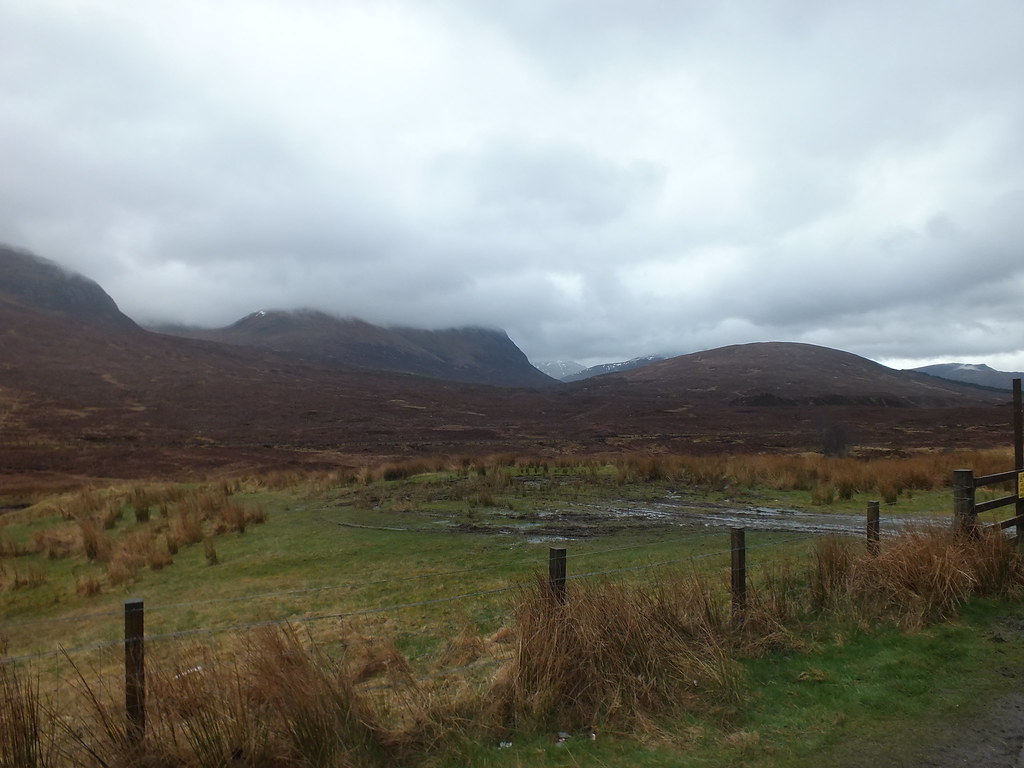 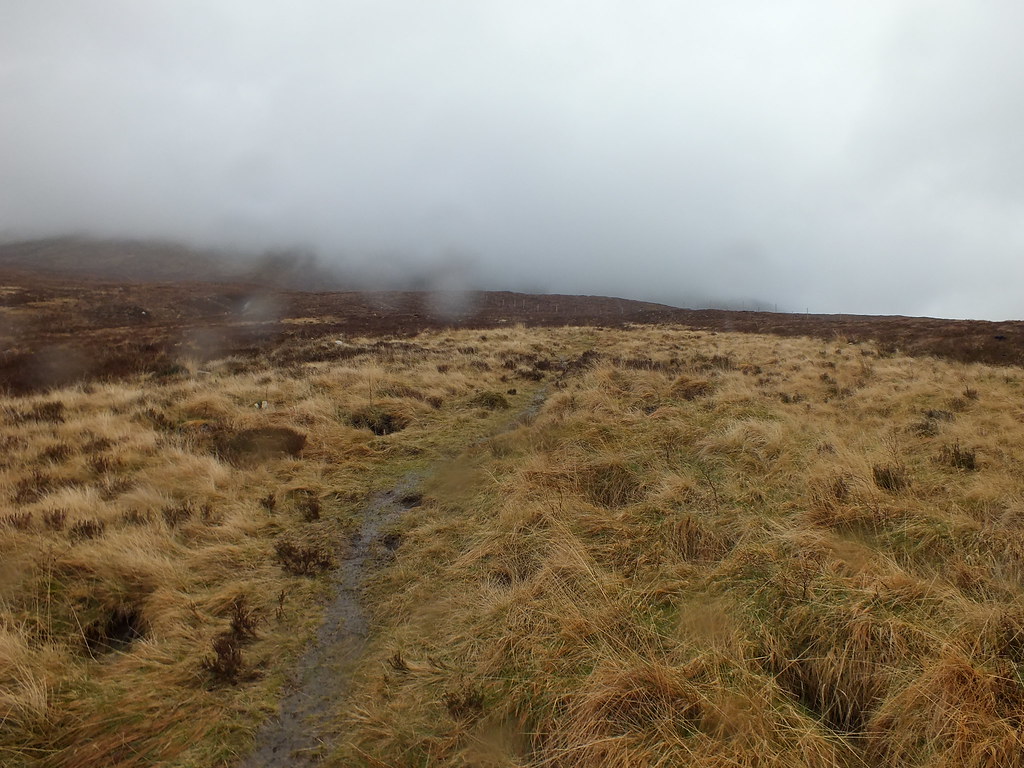 Path is a burn, apologies for the spots on the lens

I won't describe the route as that is already well documented and we just about managed to follow the path uphill to Moruisg. The descent off Sgurr nan Ceannaichean didn't quite go to plan, more of that later

We trudged uphill following the path, stopping occasionally, in fact quite a few times - not to admire the views or take pictures, but for the obvious - answers on a postcard to York 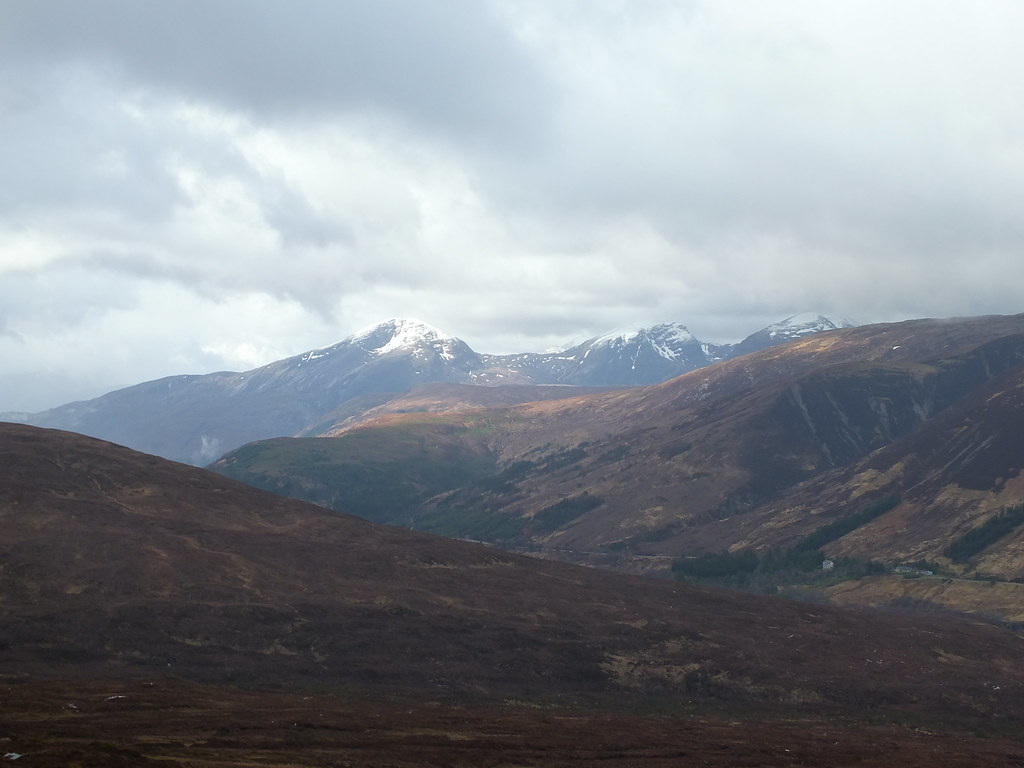 Brief view before we entered the cloud 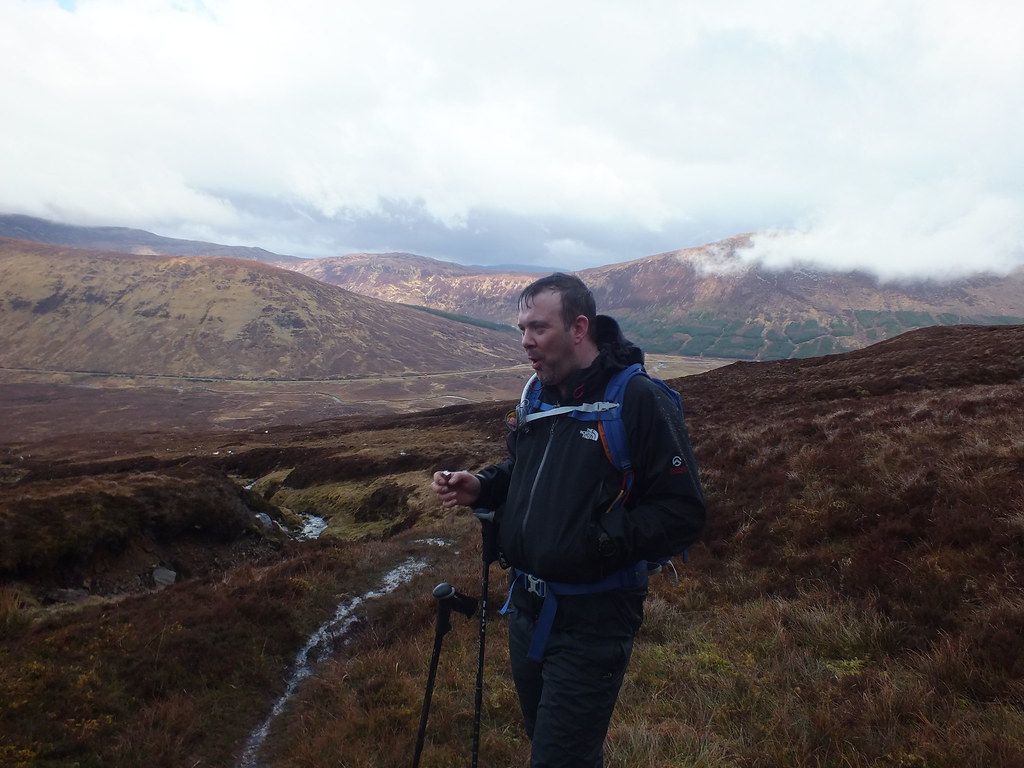 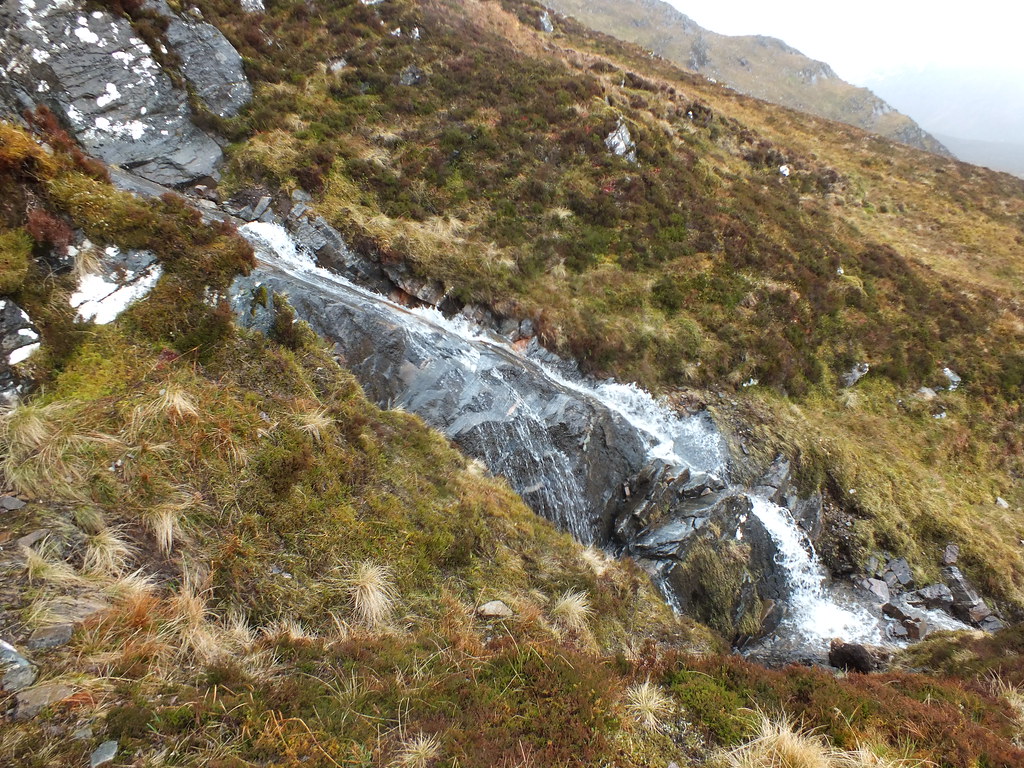 Considering the amount of underfoot dampness, there weren't many water features on the ascent of Moruisg, so you will have to makedo with this

We were both surprised at how quickly and easily we reached the summit of Moruisg, no wonder we had been huffing and puffing a wee bit

We did encounter a bit of soft slushy snow just before the summit, but it didn't hamper our progress 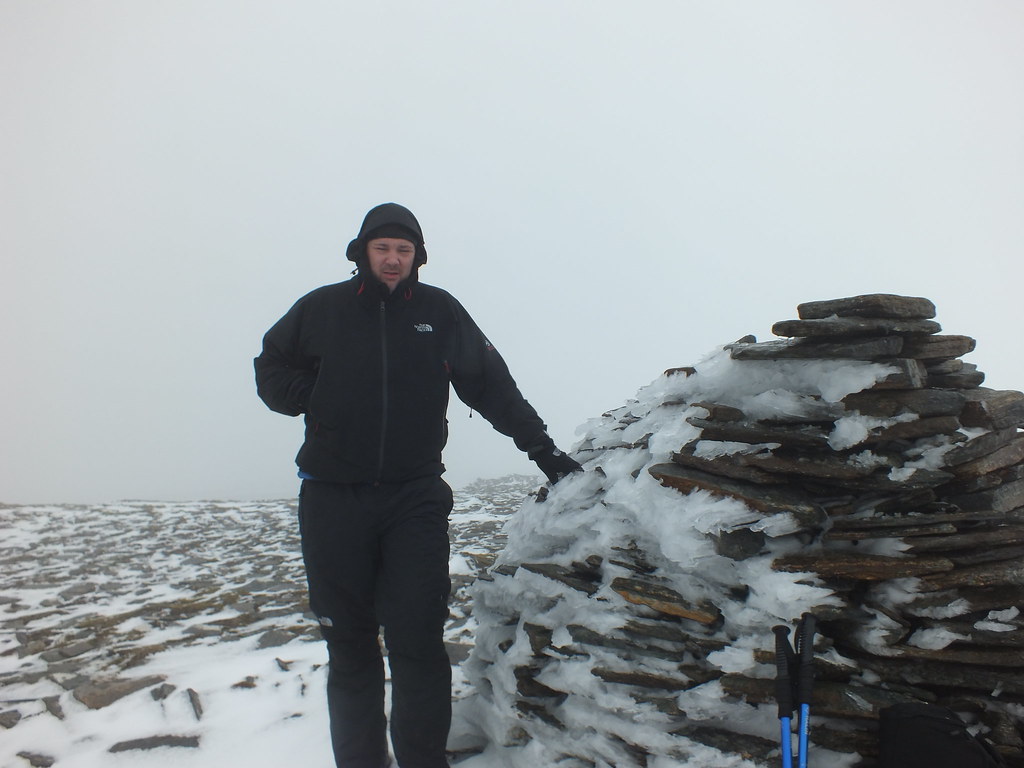 Mr G doesn't look overly like he is overheating 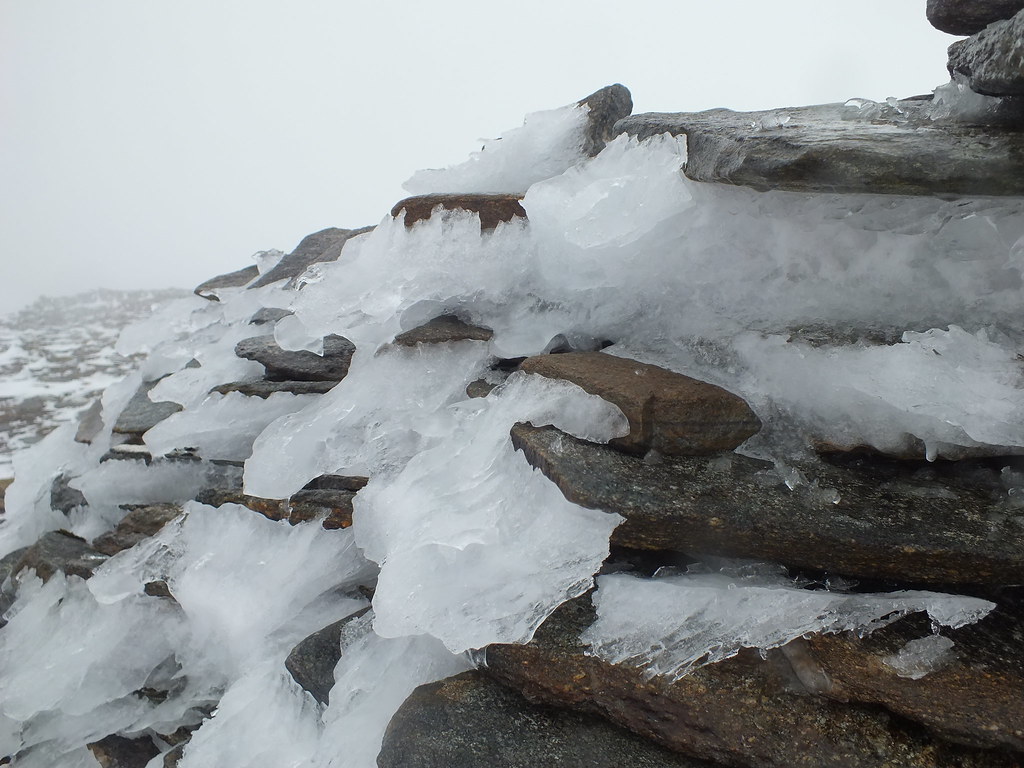 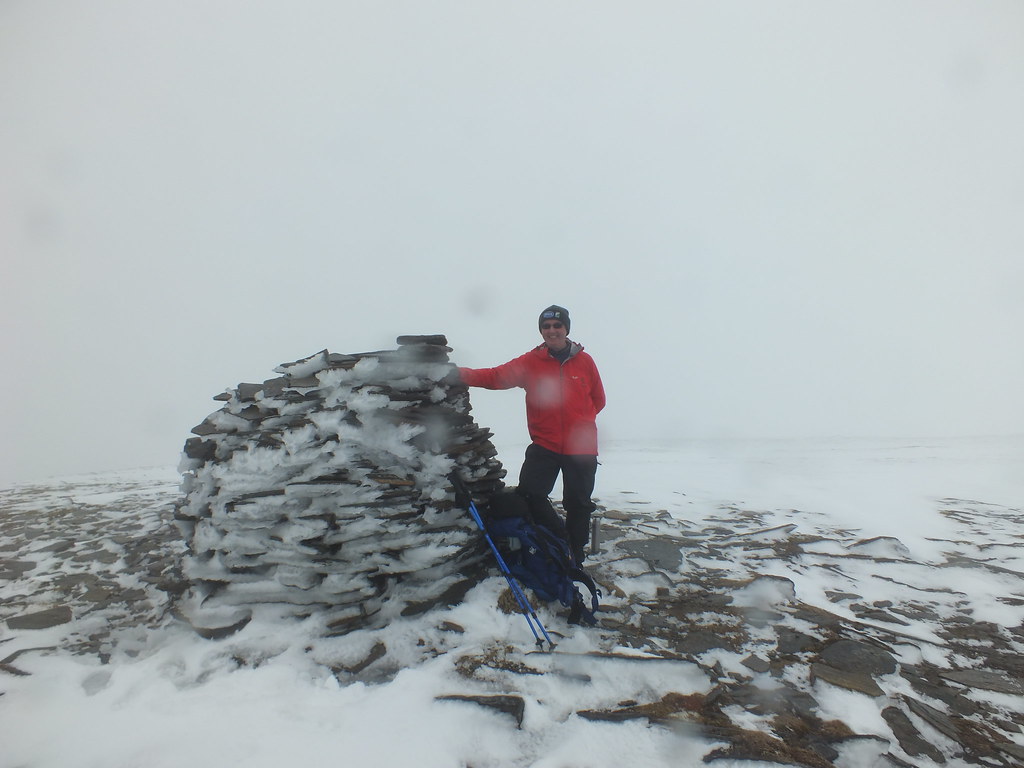 Summit shot, apologies for the spots on the lens (again)

We didn't hang around on the summit of Moruisg any longer than we had to, so it was time to start descending down towards the bealach and what turned out to be the star of the show Sgurr nan Ceannaichean 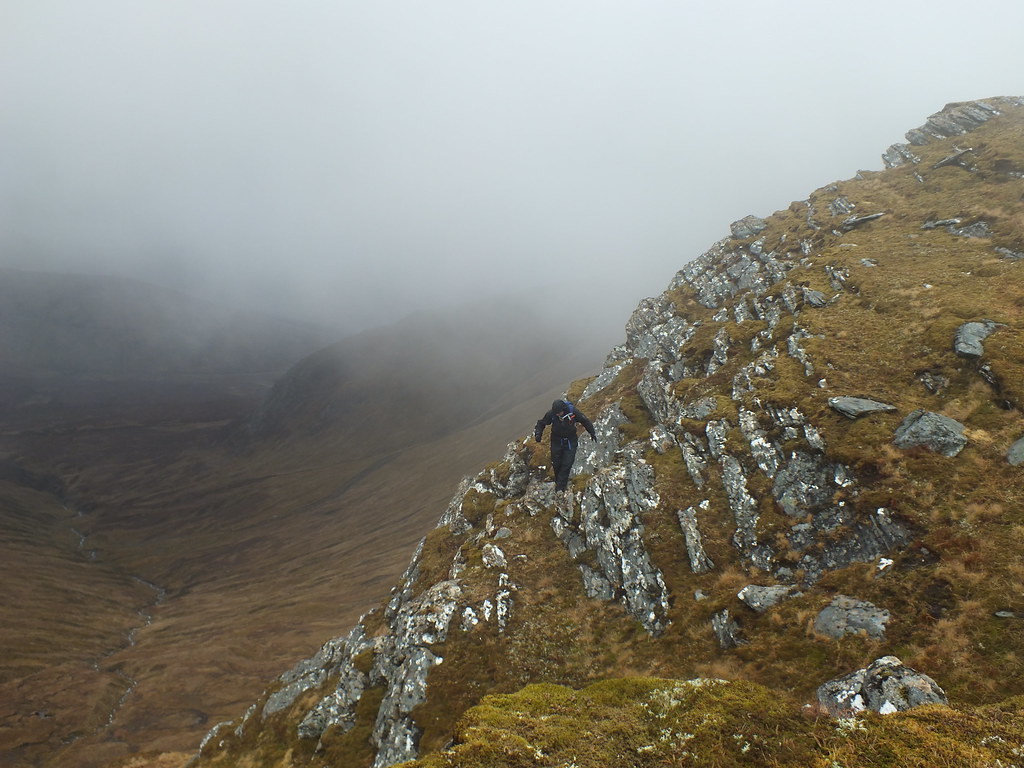 Martin always one for a suitable poser photo, volunteered to go off piste 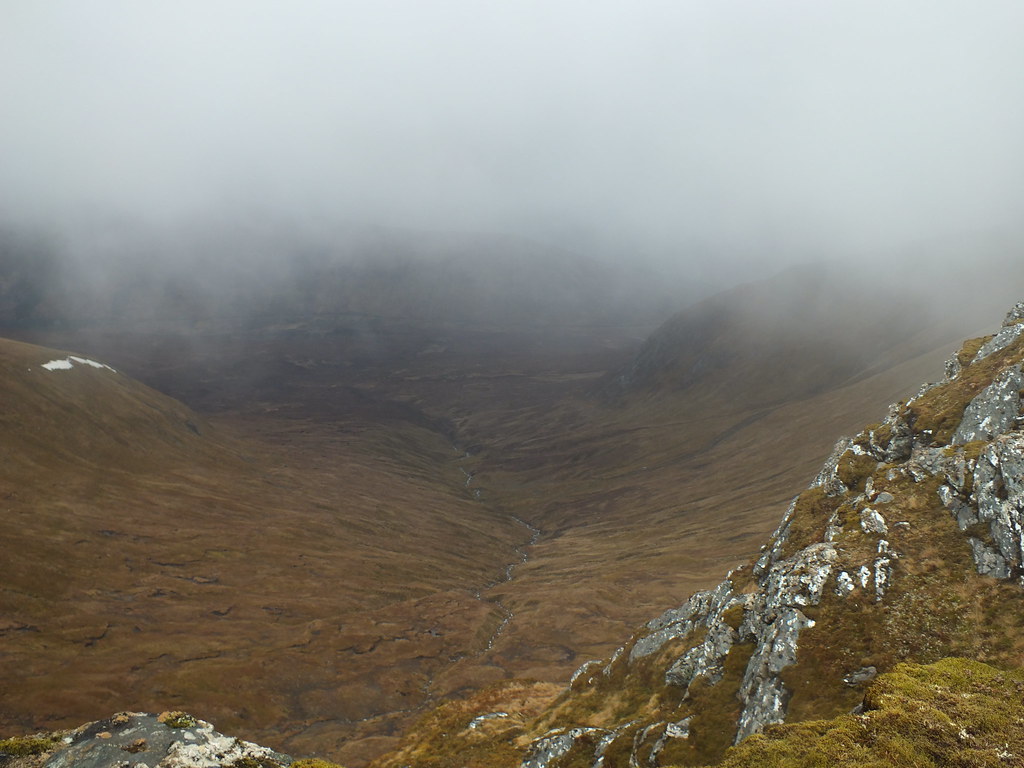 Almost a view, probably impressive on a good day 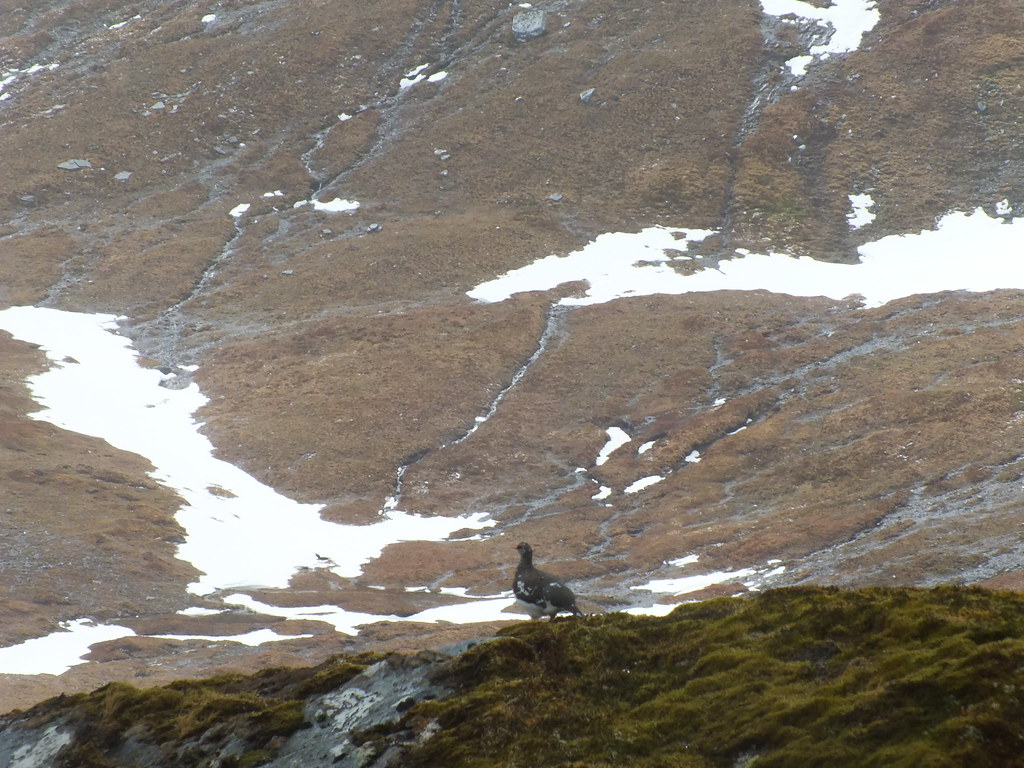 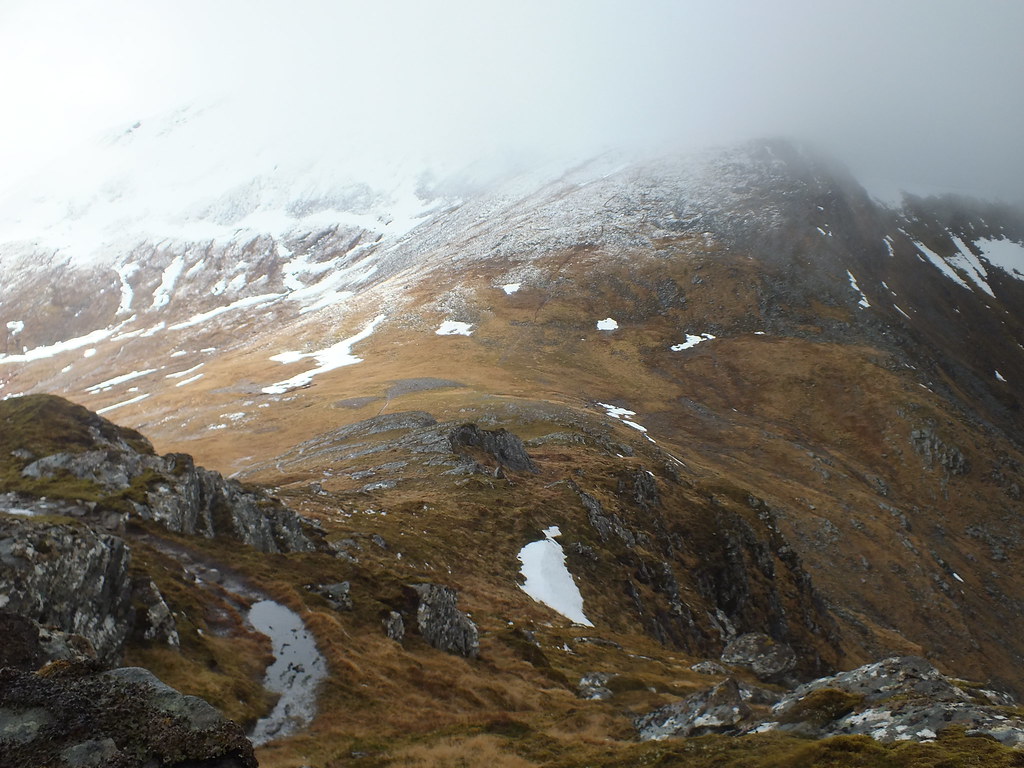 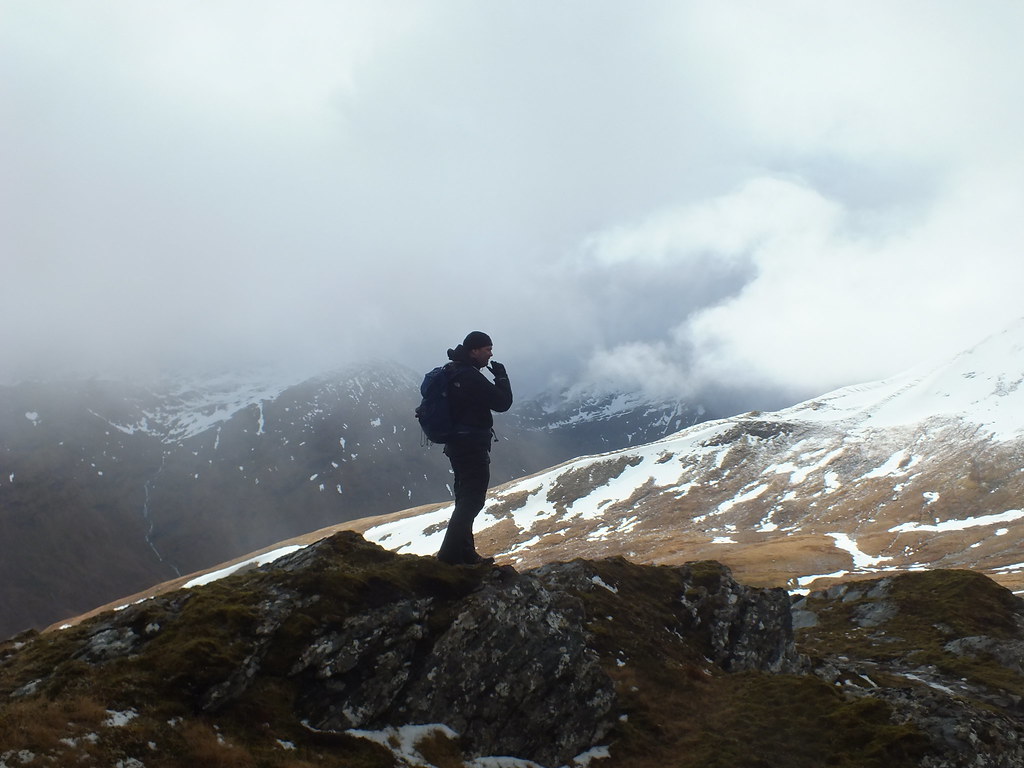 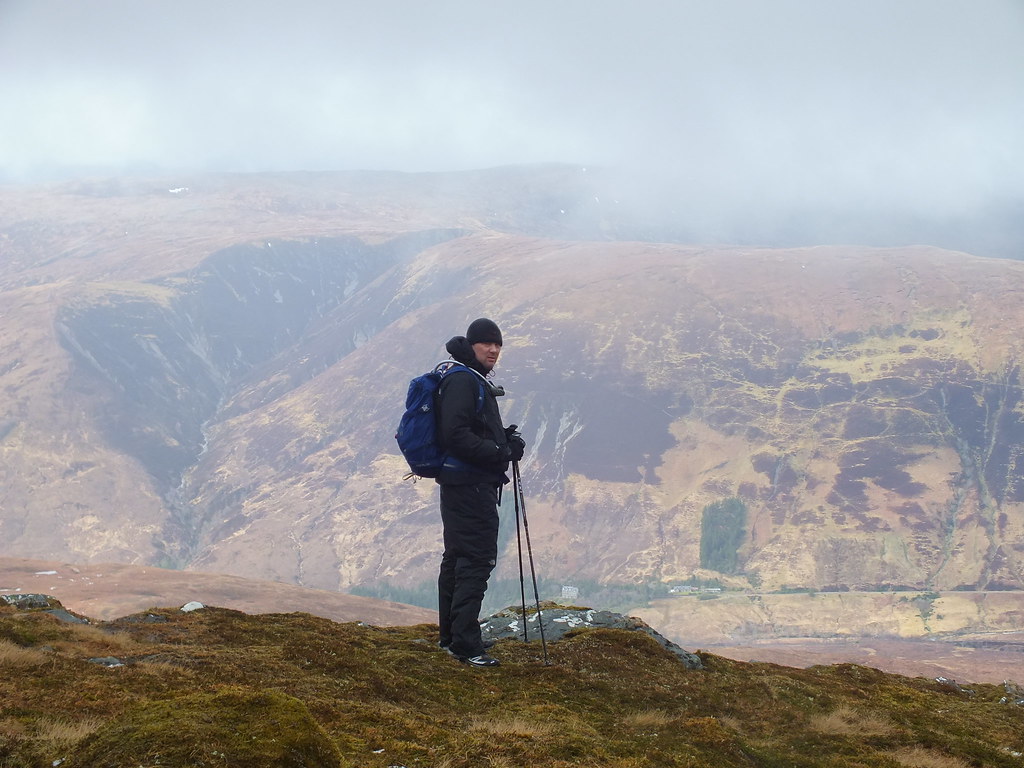 Whilst struggling uphill, I was also thinking ahead and dreading the descent and had visions of my backside being tested 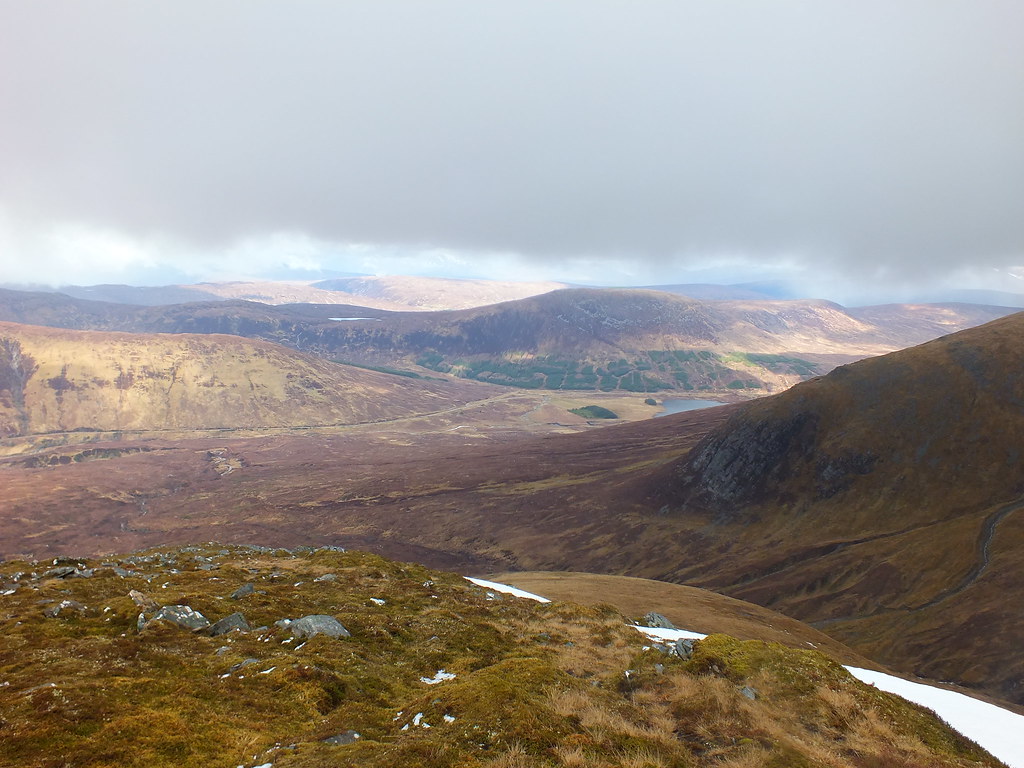 Quick photo whilst we had a view 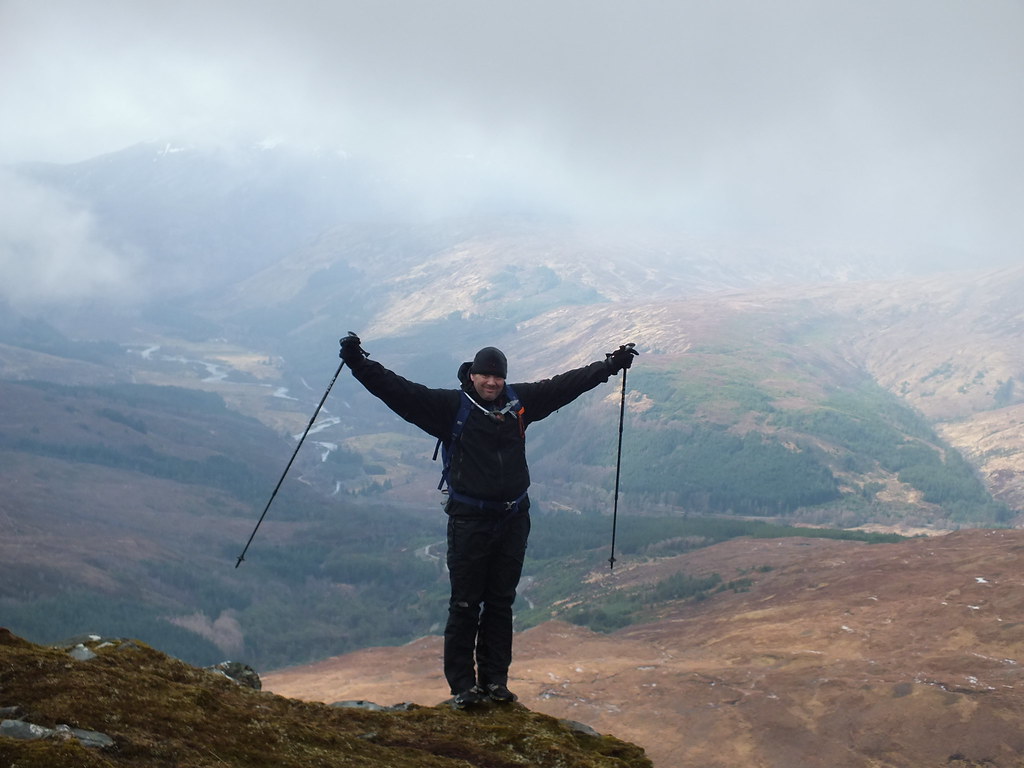 Different pose in a different location

Due to the lack of photo opportunities on Sgurr nan Ceannaichean because of the conditions, weather and underfoot, there aren't any. It was freezing cold on the summit and my camera was in my rucksack and the background would be the same shade of grey as on Moruisg 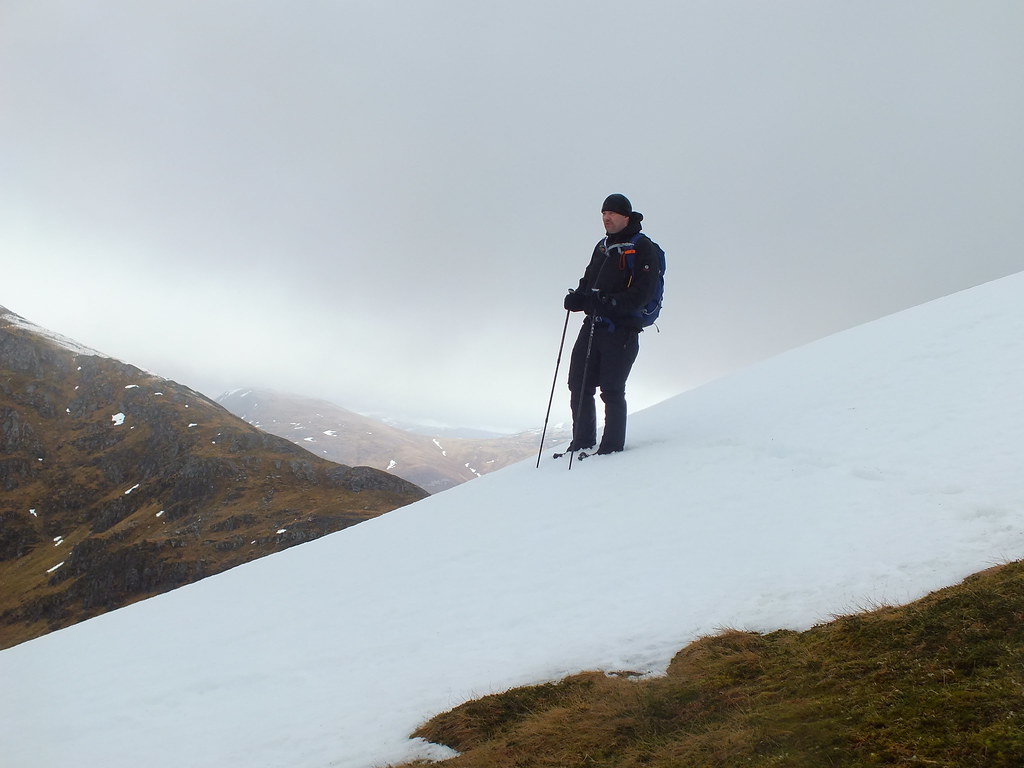 Just to prove there was some white stuff 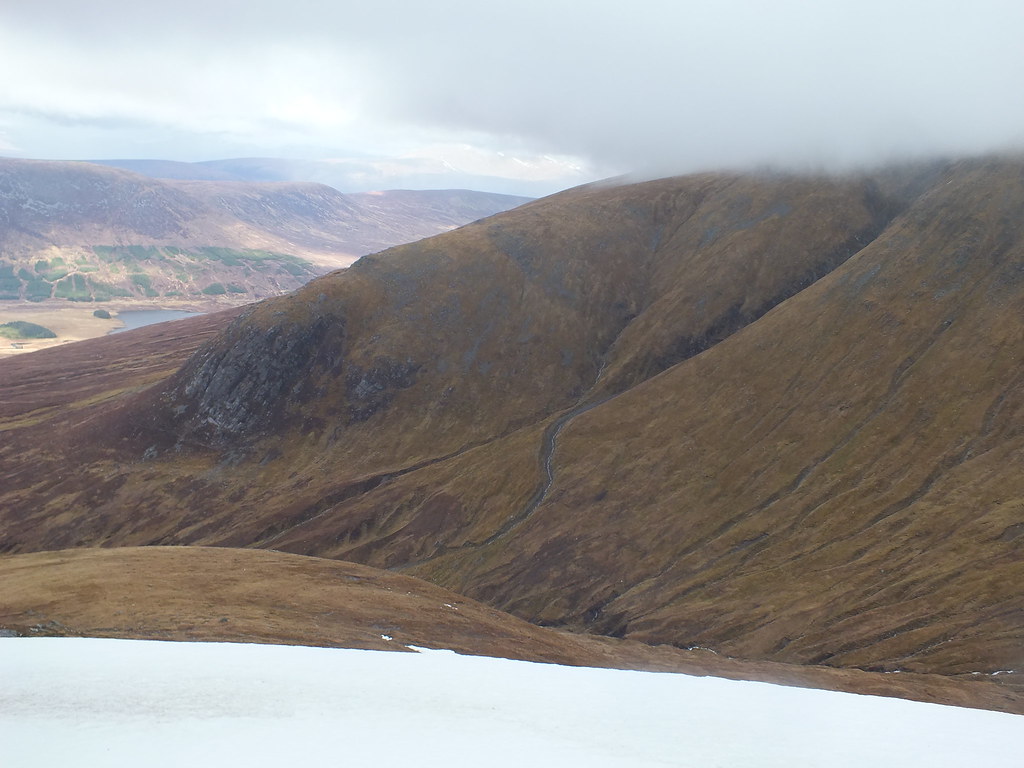 Only took 2 photo's on the descent (above)

We picked up the path downhill and headed down the shoulder, for some reason or other we either lost the path or it disappeared, I would like to think the latter

We decided to head down towards the deer fence, but didn't know how we were going to clamber over it

When we reached the fence, I opted for the up and over method of deer fence scaling, Martin on the other hand decided to be adventurous and squeeze through a 1 foot square hole that someone had created by bending back the wire. I really wish I had extracted the camera and captured the struggle on film

Fun was now over, we headed east towards the burn that could be heard and it did sound like we could be in for a challenge.
When we reached the burn we had two options, head upstream or downstream to search for a suitable crossing point and you won't be surprised we picked the wrong one

We continued downhill battling with the undergrowth, clambering up and down the steep sides of the burn, the annoying thing was we could see the path which looked very appealing following the burn downhill

Eventually Martin made an executive decision that he was going take a leap across the torrent onto a large damp flatish rock, there was definitely no wimping out as he threw his poles onto the other side and then made it look very easy. My turn - eeek, I threw my poles across and went for it. I knew it was going to be 'interesting' as mentioned earlier, my boots are devoid of tread and I found it difficult to retain my balance, thankfully Martin grabbed hold of me and pulled me to safety

All we had to do now was follow the path which eventually took us back to the cars. By now both of us had rather wet feet and I got to the point where I couldn't care less about standing water/puddles, splish splash

After 5 and half hours we were back at the cars removing our boots, we were both pleased with how well we had done especially as we spent about 30mins finding a crossing point

A huge thanks to Martin for his company, as always plenty of banter. We both agreed that Moruisg is a hill that won't be on our radar for a very long time 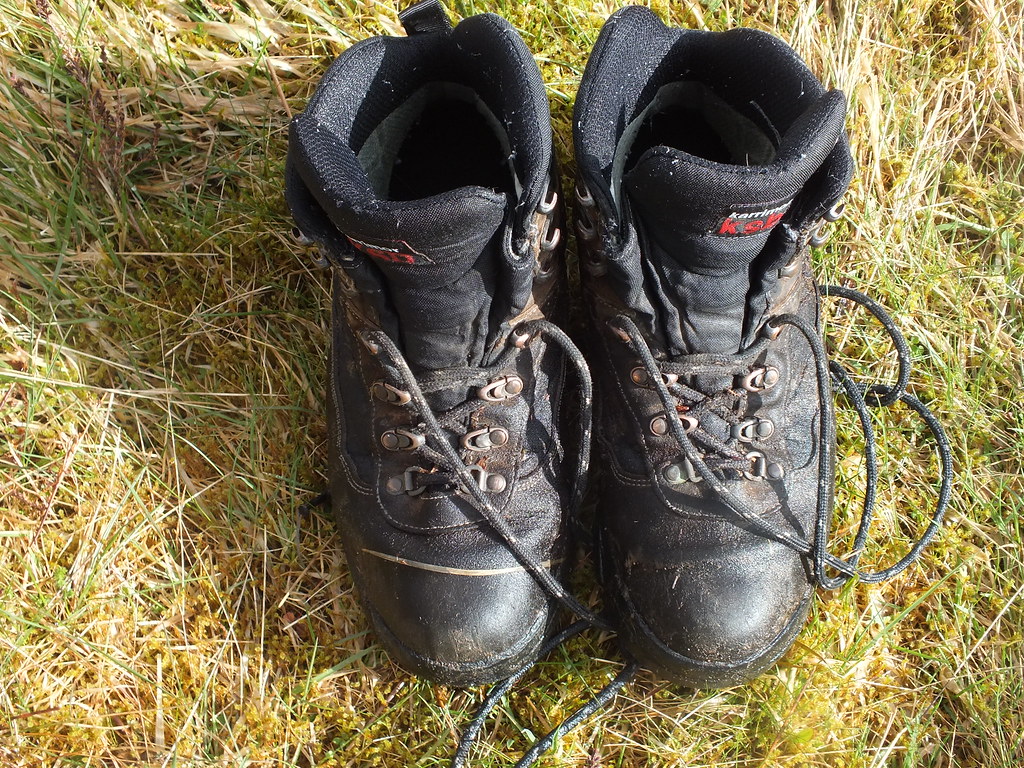 Next hill An Teallach

Re: One for the bog trot fanatics - WH Meet

Oh river crossings....so glad it's not just me!!! Although I would have ended up falling in as I doubt Hugh would have caught me