Very sloppy Slioch - I'll be back!

Very sloppy Slioch - I'll be back!


At last, my final offering from the weekend

I'll do them as I go along next time

The weather had been looking better for Sunday but it appeared to be taking a turn for the worse. We decided to go for Slioch anyway as it was on the way home. We planned to get a nice early start as there was a long drive home to be done, and we were going to be joined by Geoff again

However, as the evening progressed, it got later and later, more whiskey was consumed by a certain person

and we realised that there were others planning Slioch starting later, so we decided to compromise and start an hour later. Unfortunately, in all the excitement we forgot to get the message to Geoff who had already gone to bed….So by the time I was conscious enough to realise in the morning, he had already left. Sorry Geoff

The car was packed, sandwiches made, breakfast eaten and Rod had been removed from his bed to shift his car which was blocking us in...

We were ready to go and Tommy, Jim and Michelle were nearly ready, which was fine until somebody got impatient and decided not to wait any longer

Managing to miss the silver Audi (which would later cause Audi-gate) we were on our way, hoping that the others would catch us up. 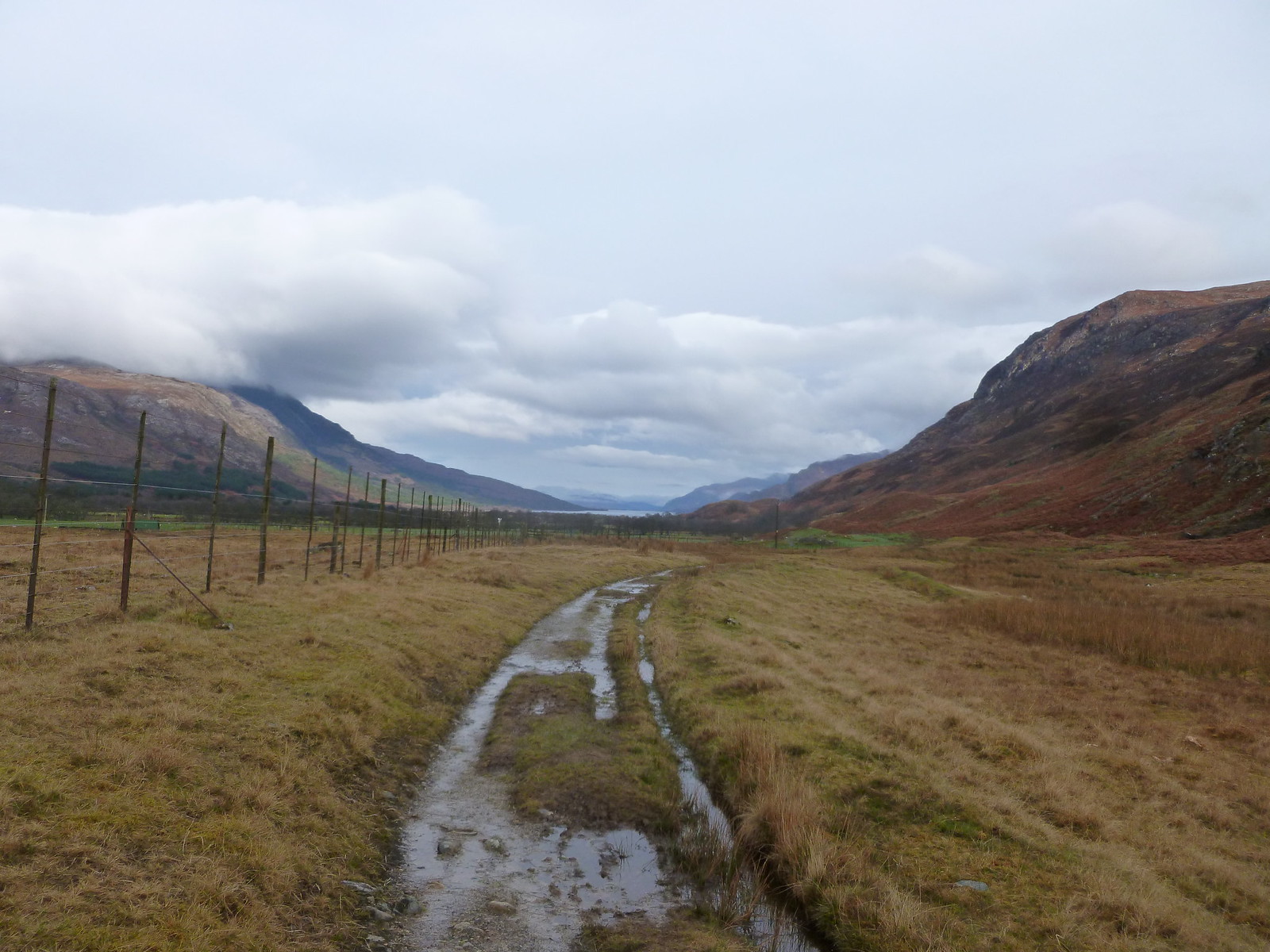 Arriving at the car park at Incheril we quickly booted up, went through the gate and along the track. The legs were feeling a bit stiff as this was day 4, but soon loosened up and we were marching along merrily, enjoying the nice flat walk in. It was a wee bit of a bog trot in places but generally nae bad, although there was a dodgy river crossing

Eventually we reached Loch Maree which was stunning. We could see Slioch ahead with the top in clouds but mostly visible and crossed our fingers for the weather. 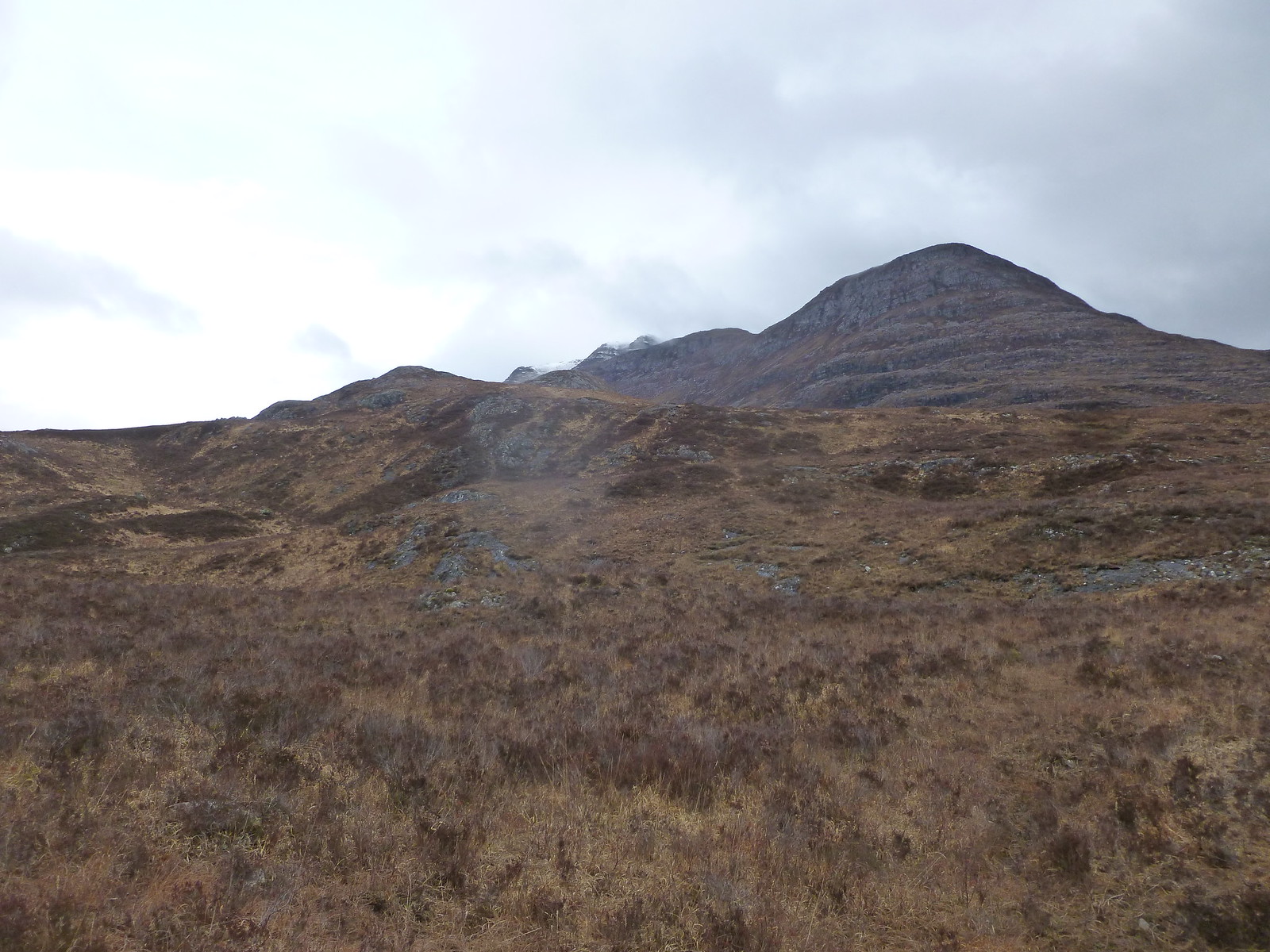 Shortly after the start of the Loch we crossed a bridge over a seriously impressive waterfall and began to head uphill. Parts of this path were very boggy and didn’t really resemble a path at all; hardly surprising given the amount of rain in the last few days. 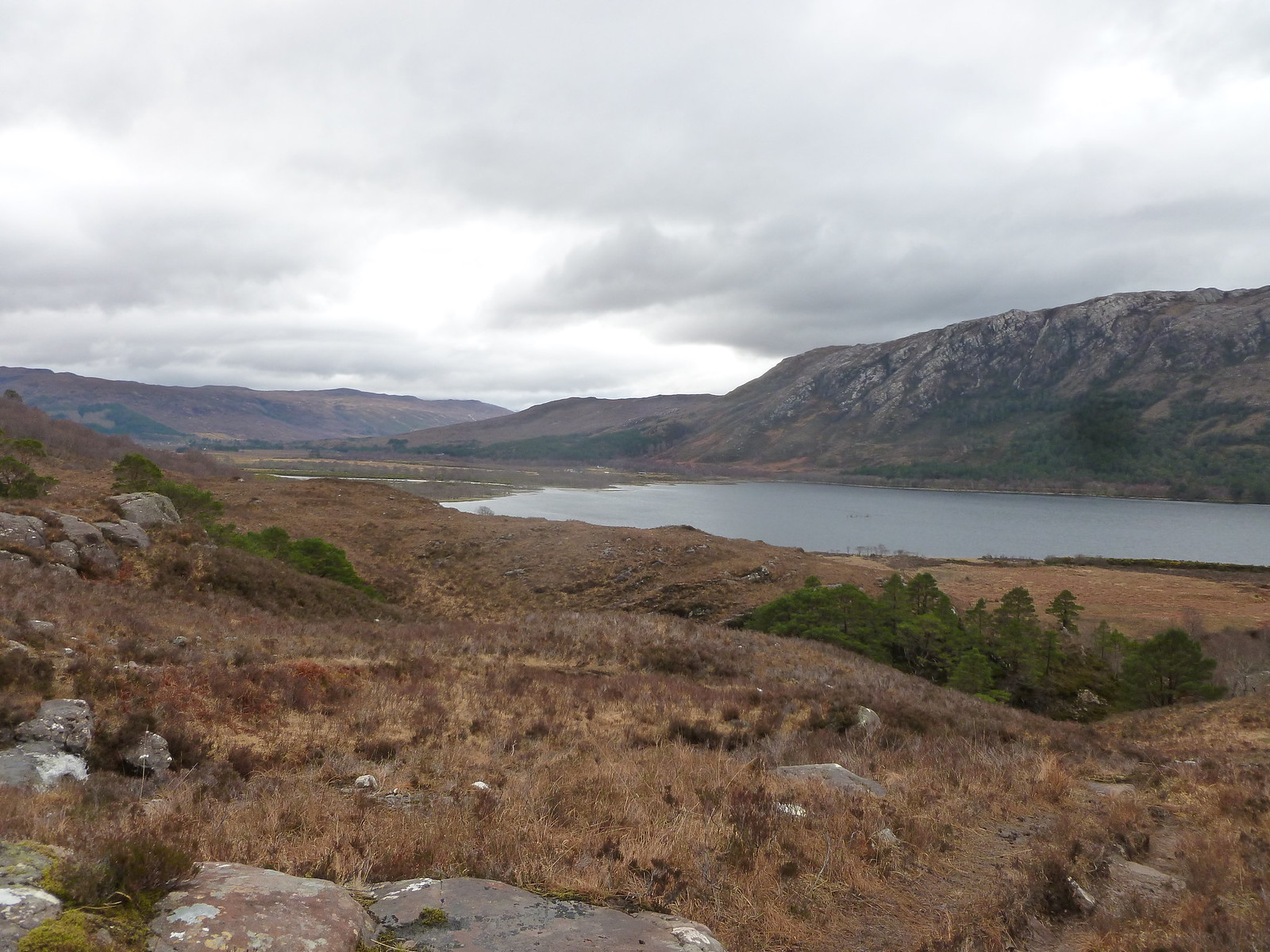 Continuing along here we could see ahead that things were about to get steeper. Unfortunately as we started up the steep bit, it started to rain. It was getting heavier quickly so the waterproofs were hastily put on and we continued the trudge uphill in the rain.

Getting my Goretex on and looking back 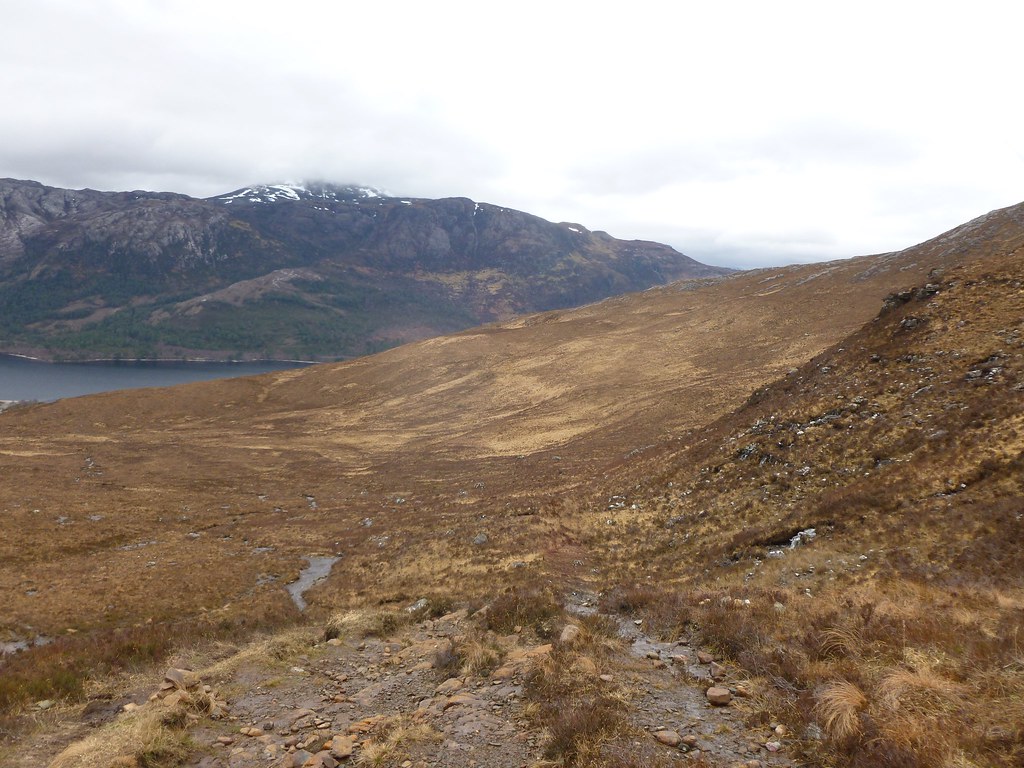 This section was hard work and probably felt worse because of the weather which was closing in fast. But the rocks were awesome - there was a section of massive flat slabs: 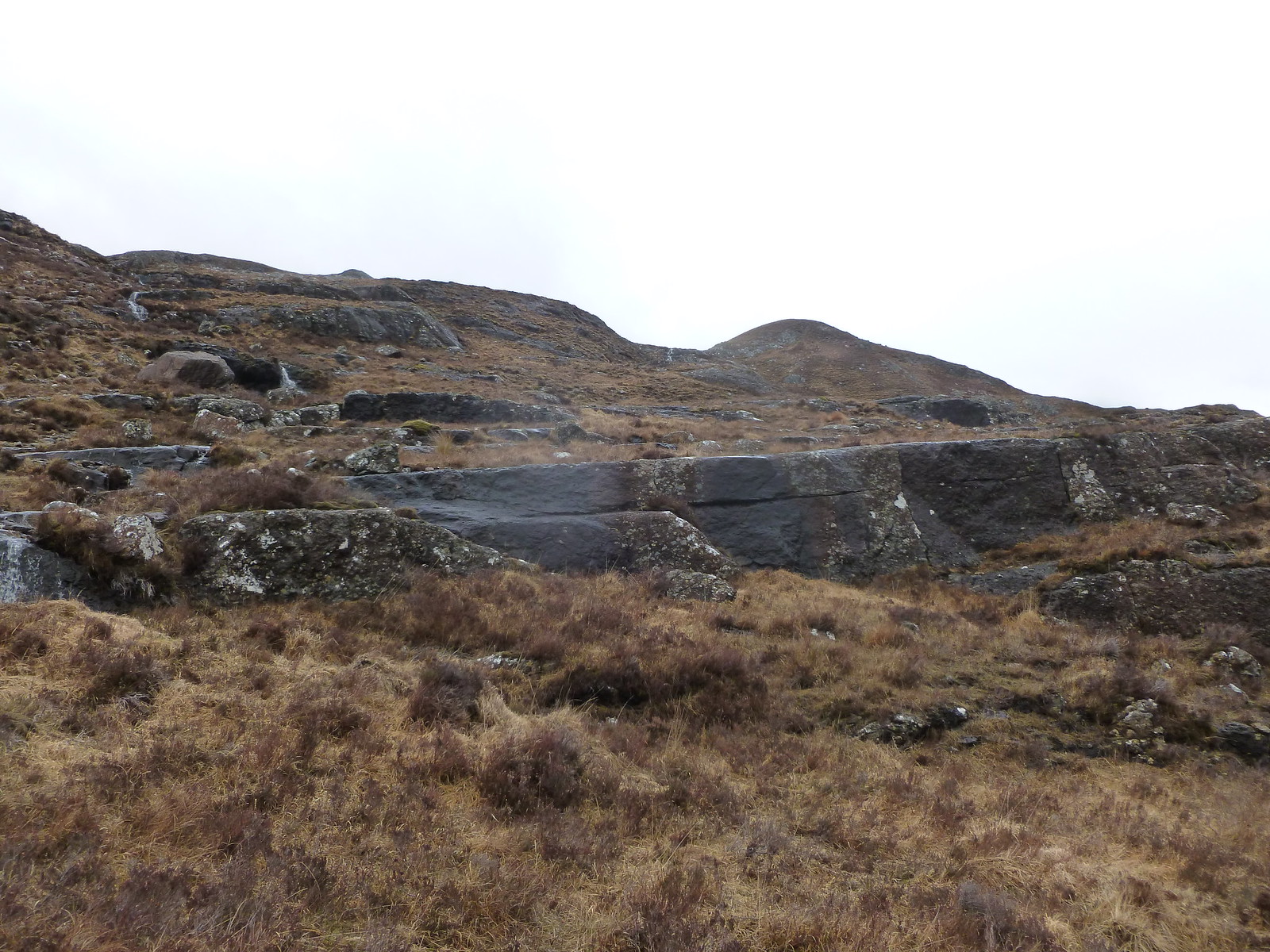 Eventually reaching the bealach we were only at 500m – it felt like it should have been a lot more! We paused quickly for a mouthful of M&Ms and then continued across the floor of the coire – we couldn’t see the other side of it but could feel it was huge! As we made our way across we began to see a path sloping to the left up the side which was our route. 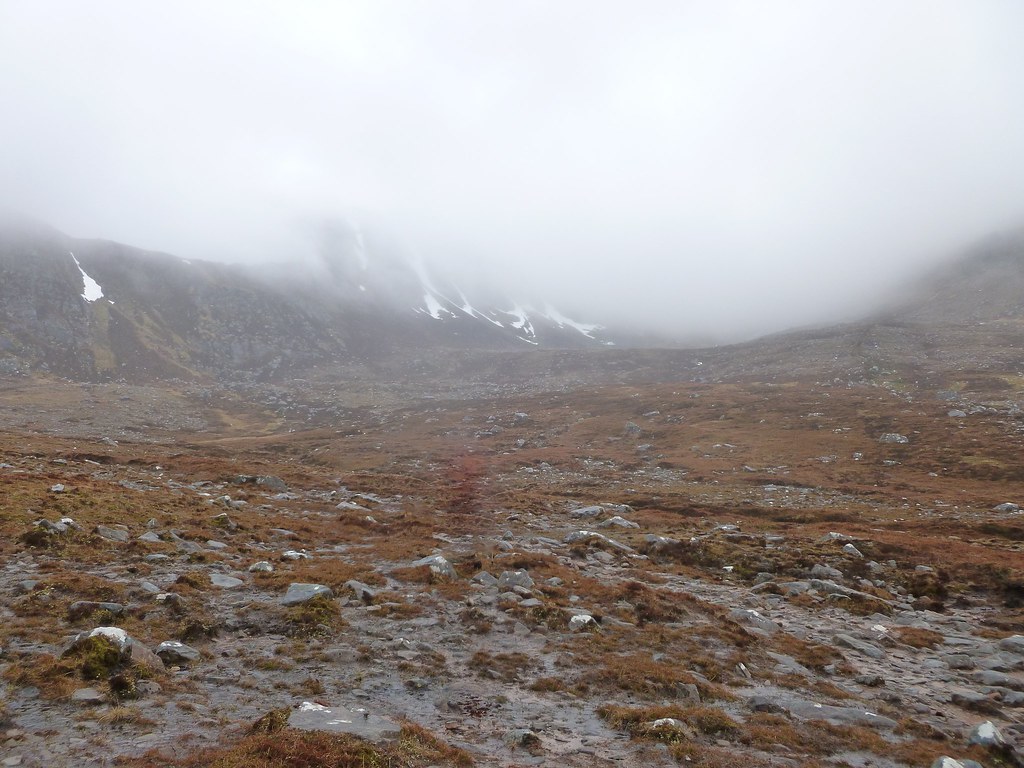 This looked steep and it had stopped raining, so the waterproofs were off again as it felt really muggy. Reaching the top of the path we were in thick clag and the wind had picked up, and we were confronted by the first of the 2 lochans which looked incredibly eerie in the mist. 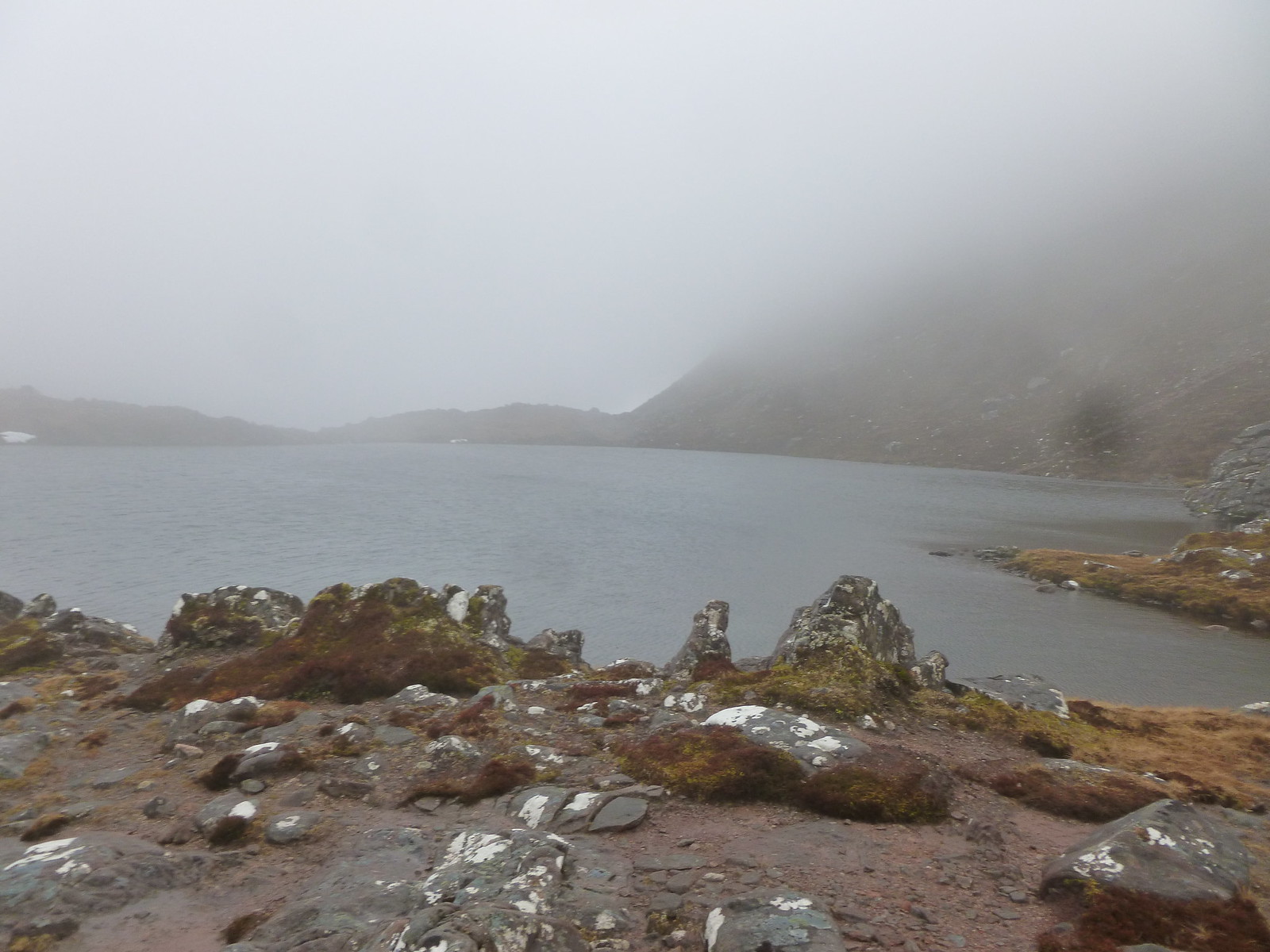 Adding another layer, we headed up the path which zigzagged steeply upwards on rocky terrain. Part way up here we reached the snow, which was fresh and not too deep leaving the path visible. Some way up here it started raining again so the waterproofs were back on. It then levelled out and several sets of footprints led us a short distance to a cairn, the 933m point marked on the map.

We could see the footprints leading on but checked the map and compass just to be sure. All in agreement, we trotted on in the whiteout, steeply down to start with then across a flat section where we presumed the lochan was on the right but hidden by snow. Next we came to a steep section which was quite slippery and hard work but managed to get up it without bothering to put the crampons on. At the top of this section was the trig point which should have given us wonderful views, but didn’t. Taking another bearing we headed downwards around the curve of the cliff before the final pull up to the true summit at 981m. The wind was still blowing although the rain had stopped.

Just as we were complaining about the lack of view, there was a sudden, partial clearing to the North, giving us a tiny glimpse of what this mountain could offer. It lasted about 2 seconds and we nearly missed it, but I had this feeling that something was about to happen. It seemed slightly brighter than before and it was so blowy that surely the wind would blow away the clag? 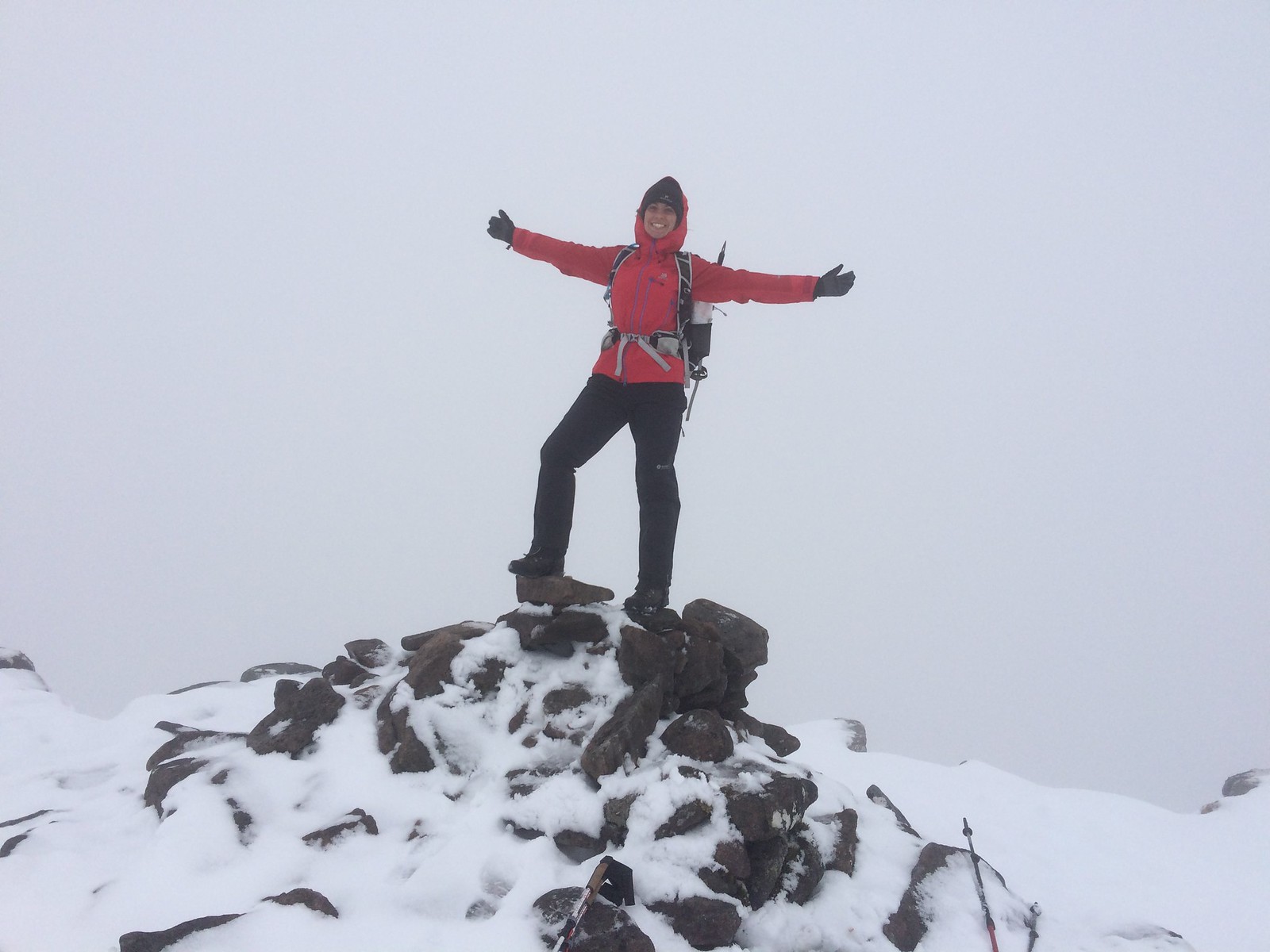 I tried to take ages over the summit pictures, then needed to tighten my boots and I was SO sure it was about to clear. I was tempted to stick on my Rab jacket and wait for 10 minutes, but somebody didn’t have any more clothes and was complaining (he is the most impatient person I have ever met

). Taking one last look around, I gave in. We had a long way back after all. There was no point going around the ridge in the rubbish weather so we elected to go back the same way. Walking as slowly as possible, I followed him into the clag.

As we passed the lochan we met Tommy, Jim and Michelle coming up – they hadn’t been that far behind us. The sun was almost visible and I had a feeling that they were going to get lucky. And so it was. As we reached the 933, suddenly it began to clear. We could see bits of the buttresses first, then Loch Maree started to appear. The mountains beyond came out of the clag and the views were AWESOME. 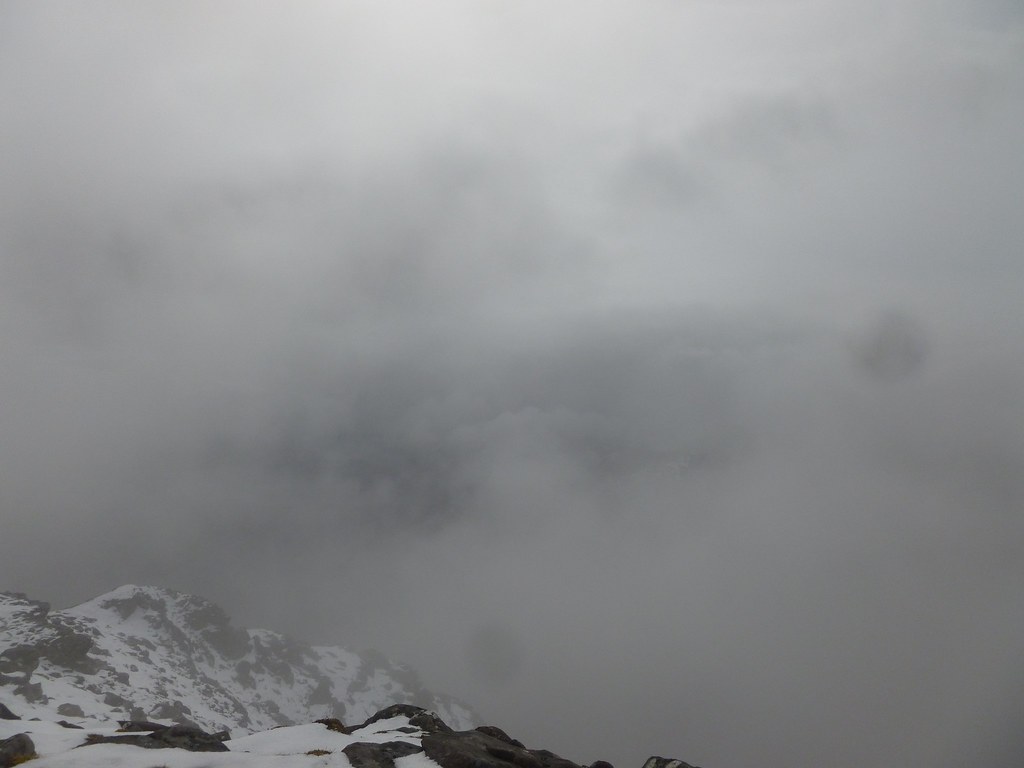 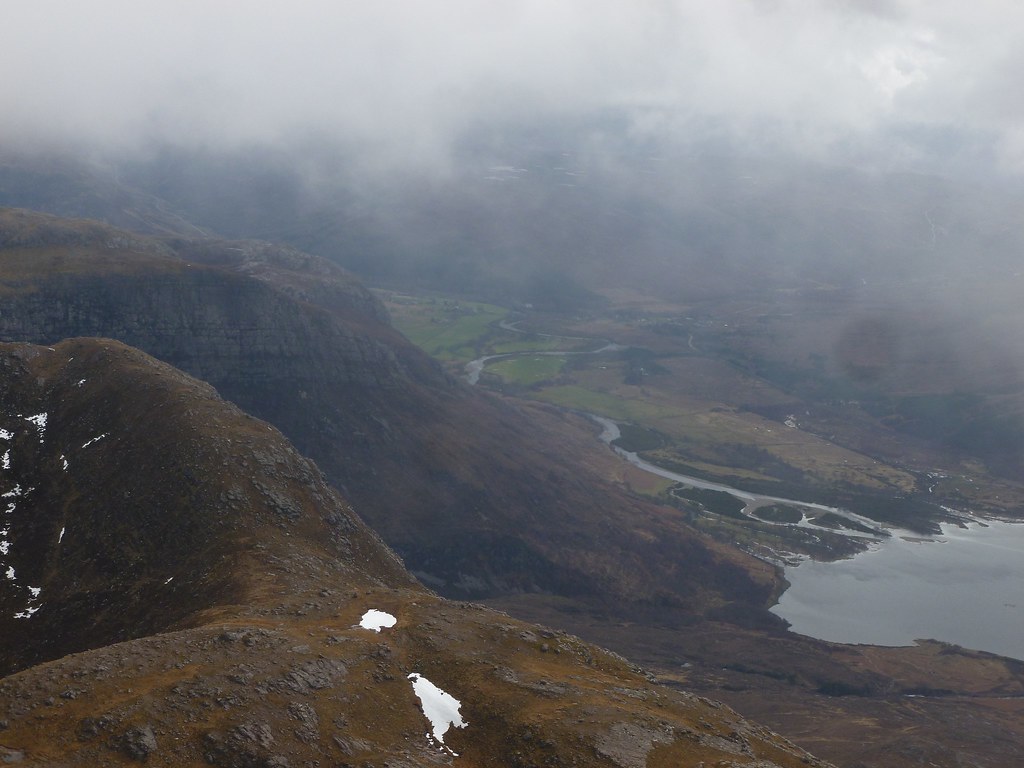 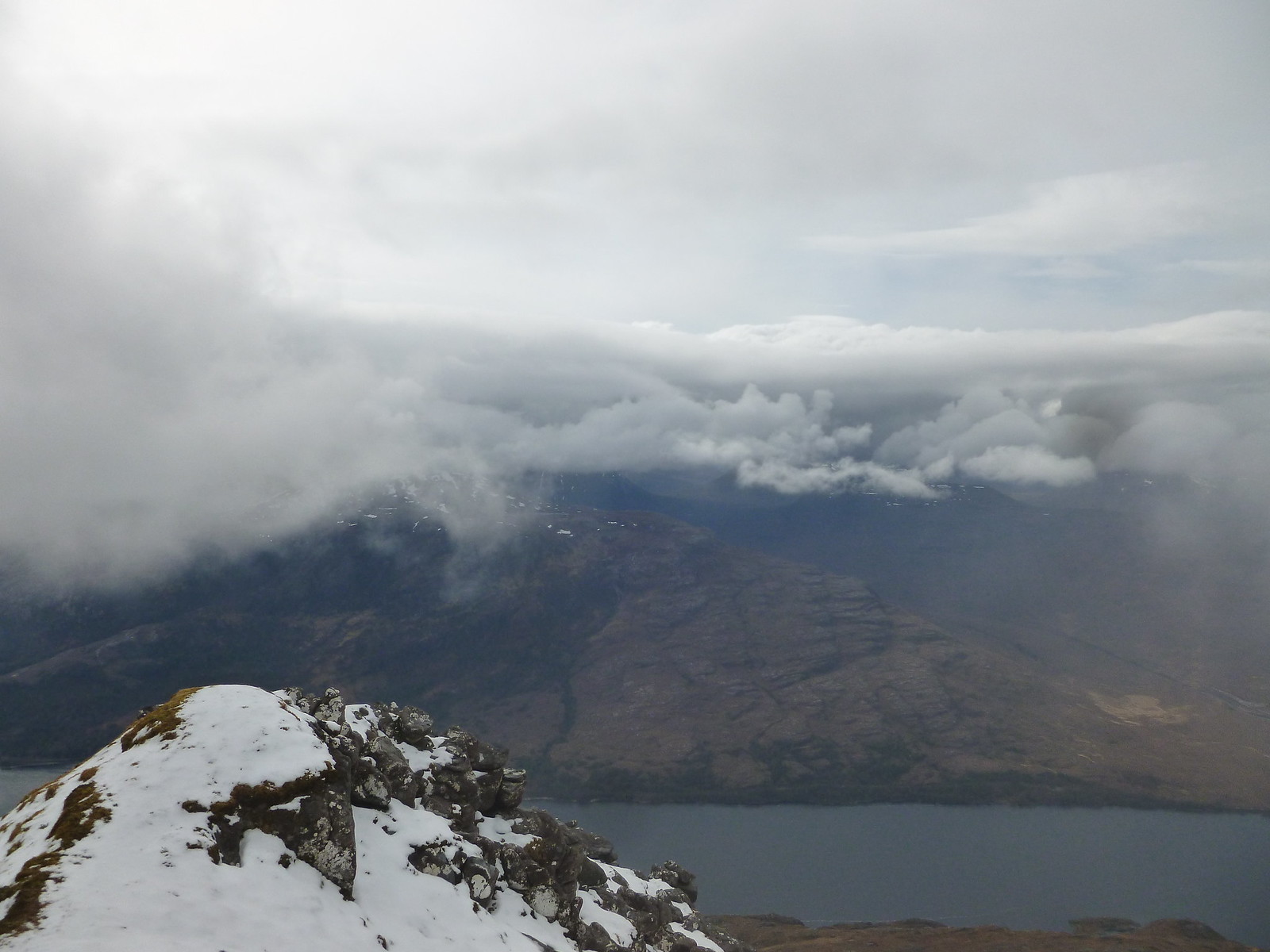 The ridge route we would have taken 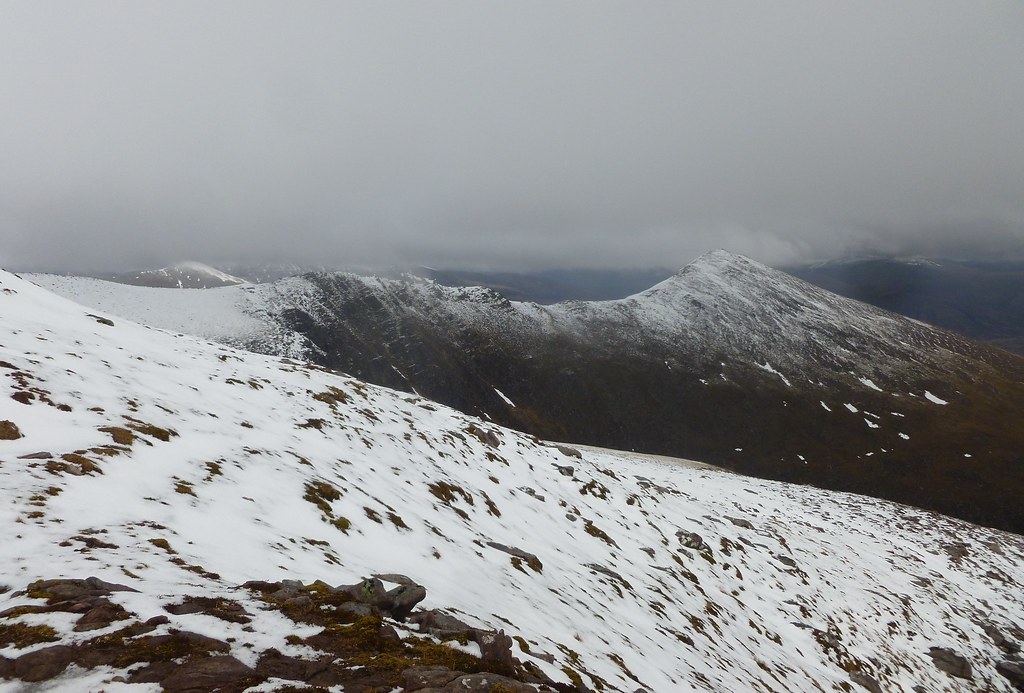 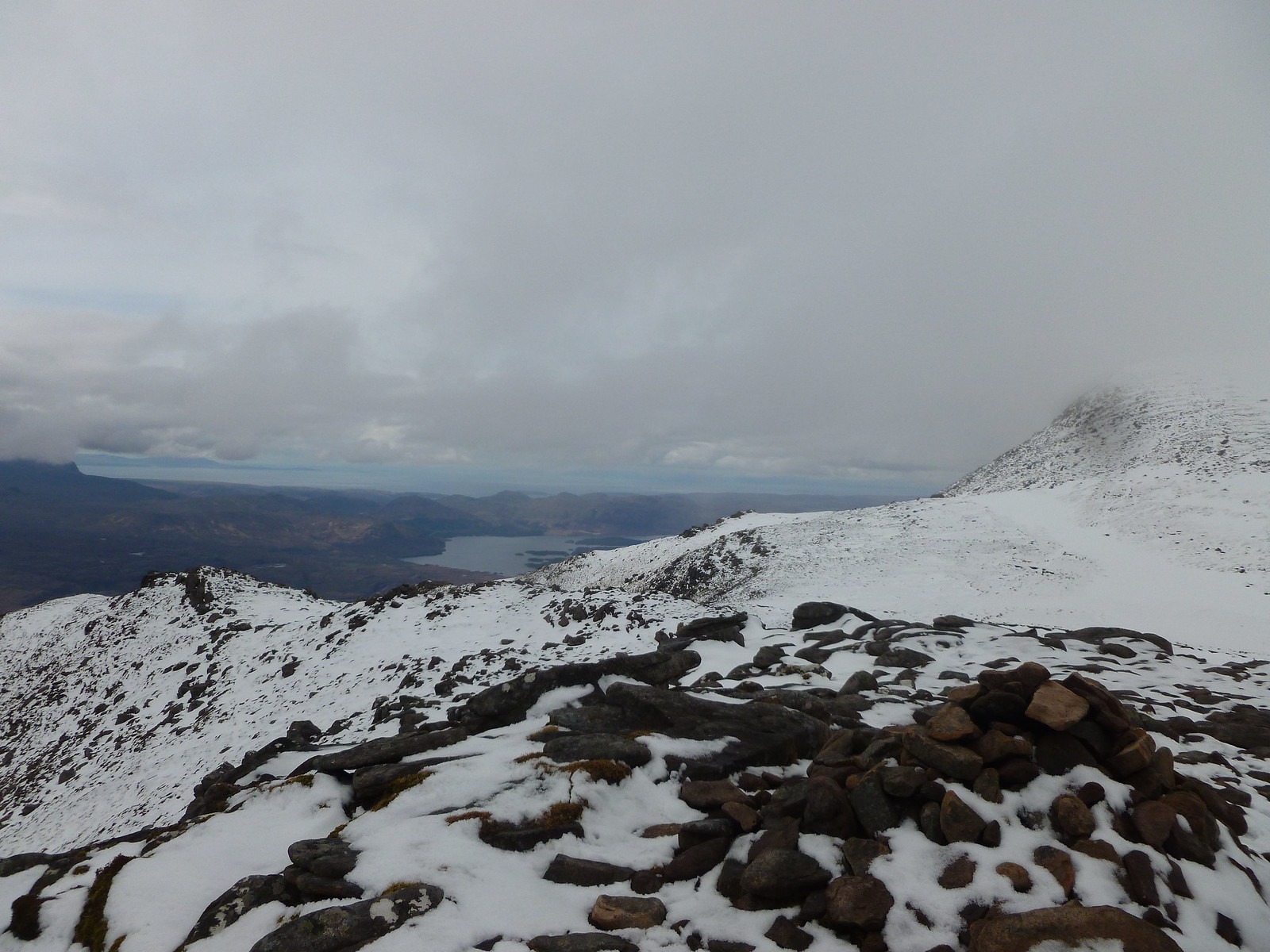 Looking back up we could see the other three walking between the trig and the true summit and it looked like they were going to get the views up top. I was totally gutted that we had missed out – we only needed to have waited 10 minutes! 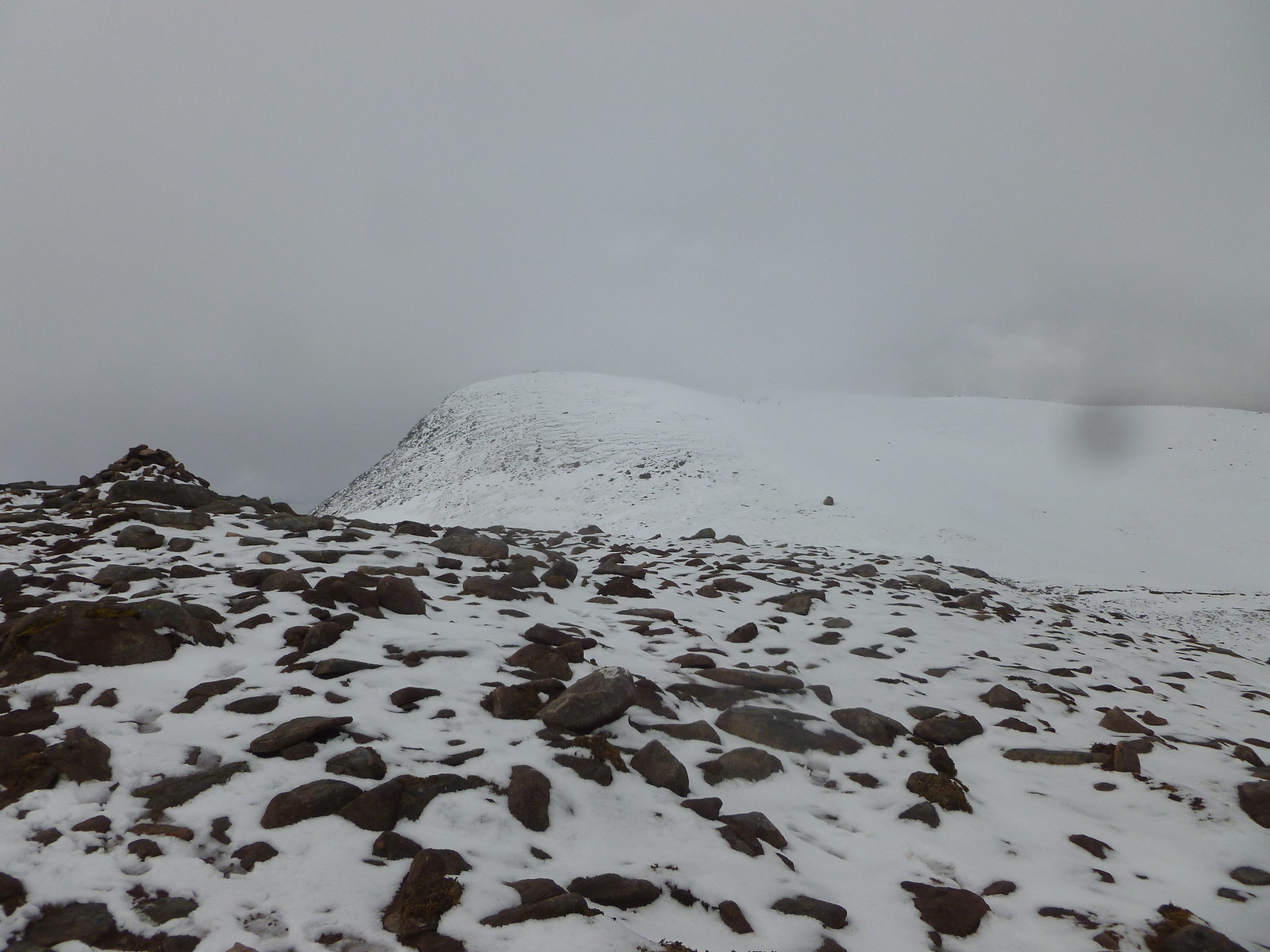 Looking down into the coire 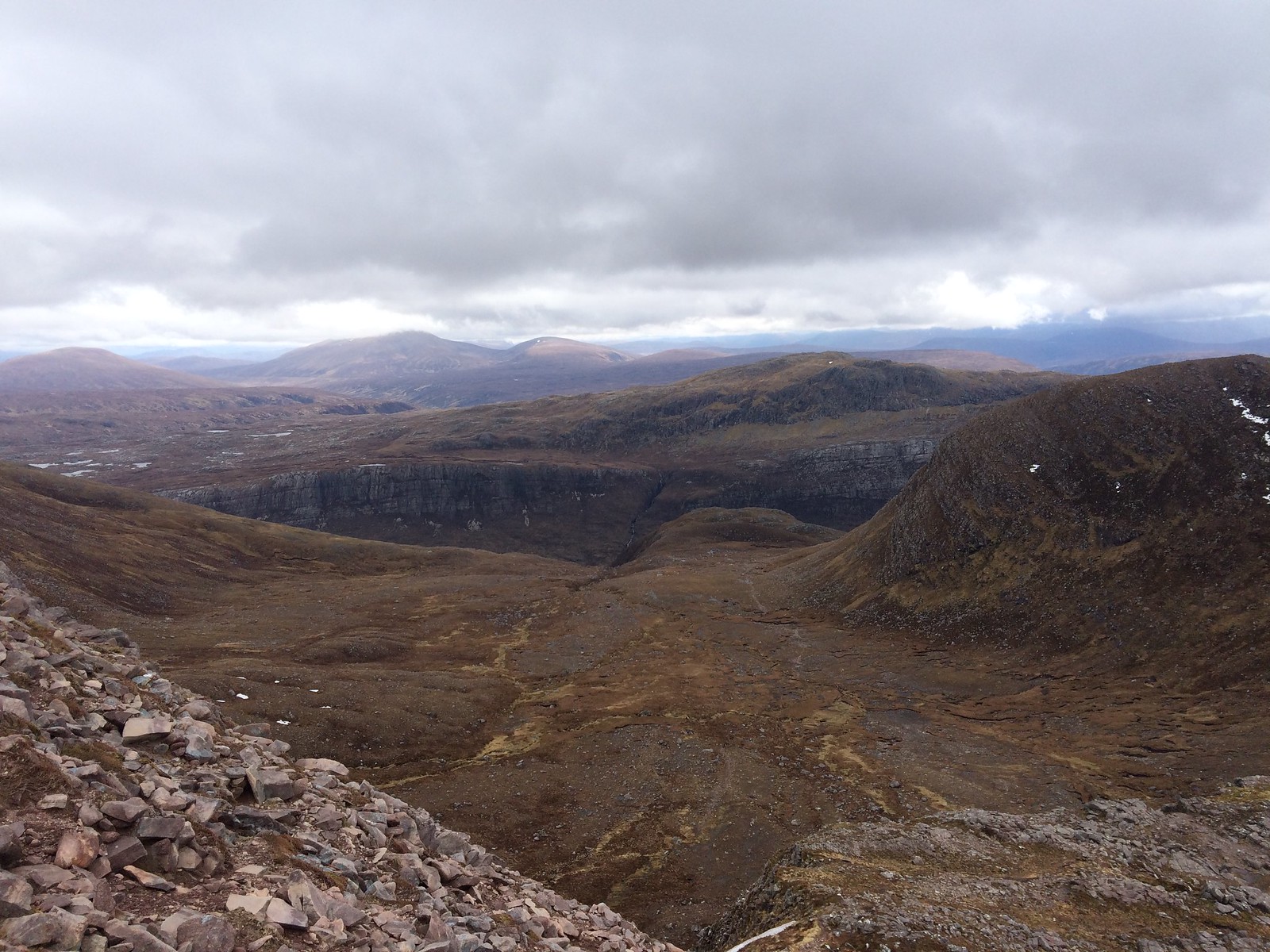 Something weird happened to the pictures here, but here's one of me about to fall over. Maybe I was being abducted by aliens 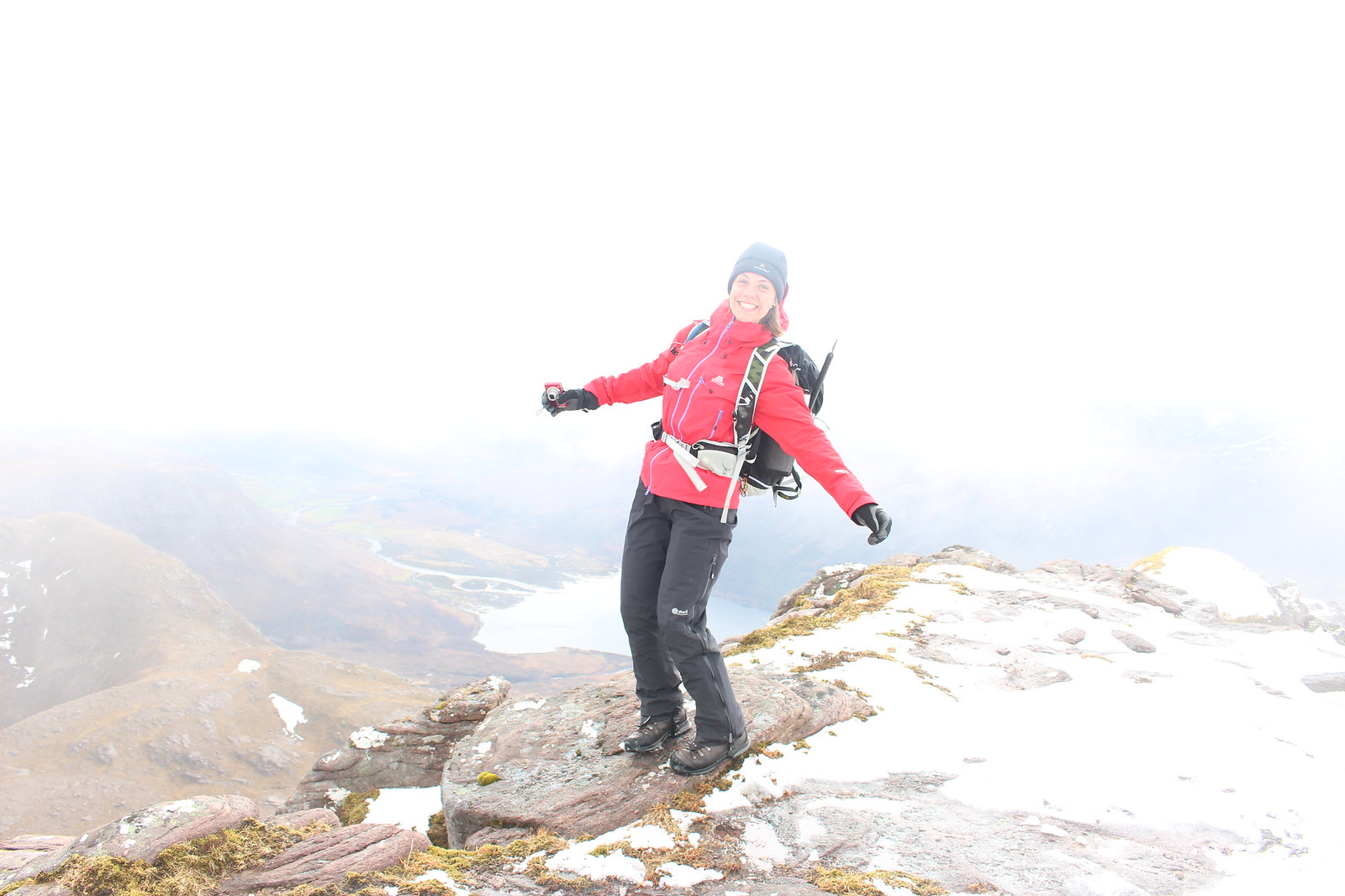 I was all for going back up, but the look I was given at this suggestion made me think that I would not be getting a lift home if I did that….

I was still tempted, and if I had been on my own I would have done, and probably gone round the ridge as well!

After enjoying the views from a less good vantage point, we figured we might as well head down. It was nice not to be in the clag any more, but I was so disappointed that we hadn’t waited higher up

We plodded down the steep section and had a sandwich by the lochan - we could now see the second one which had been hidden by clag on the way up. 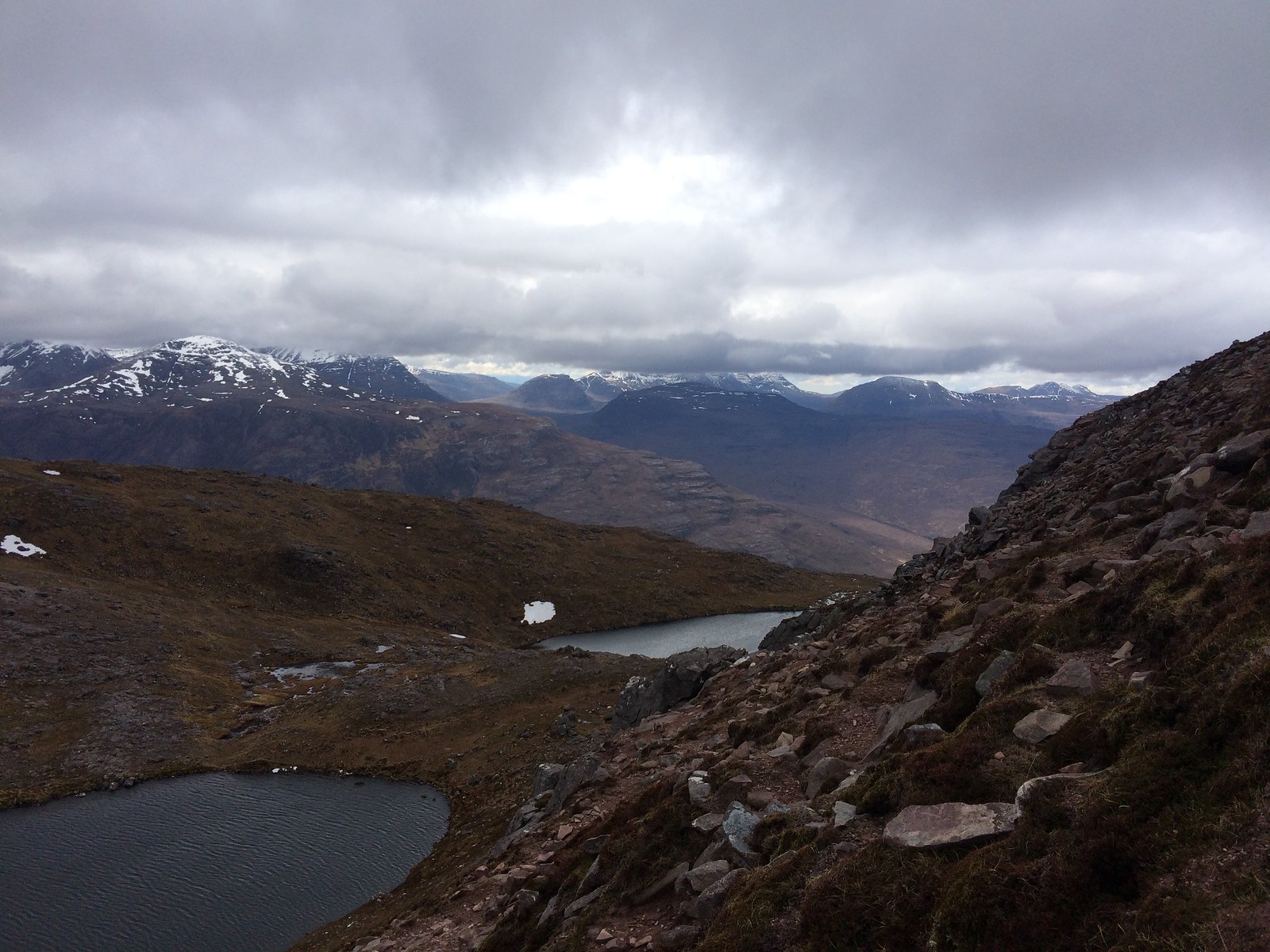 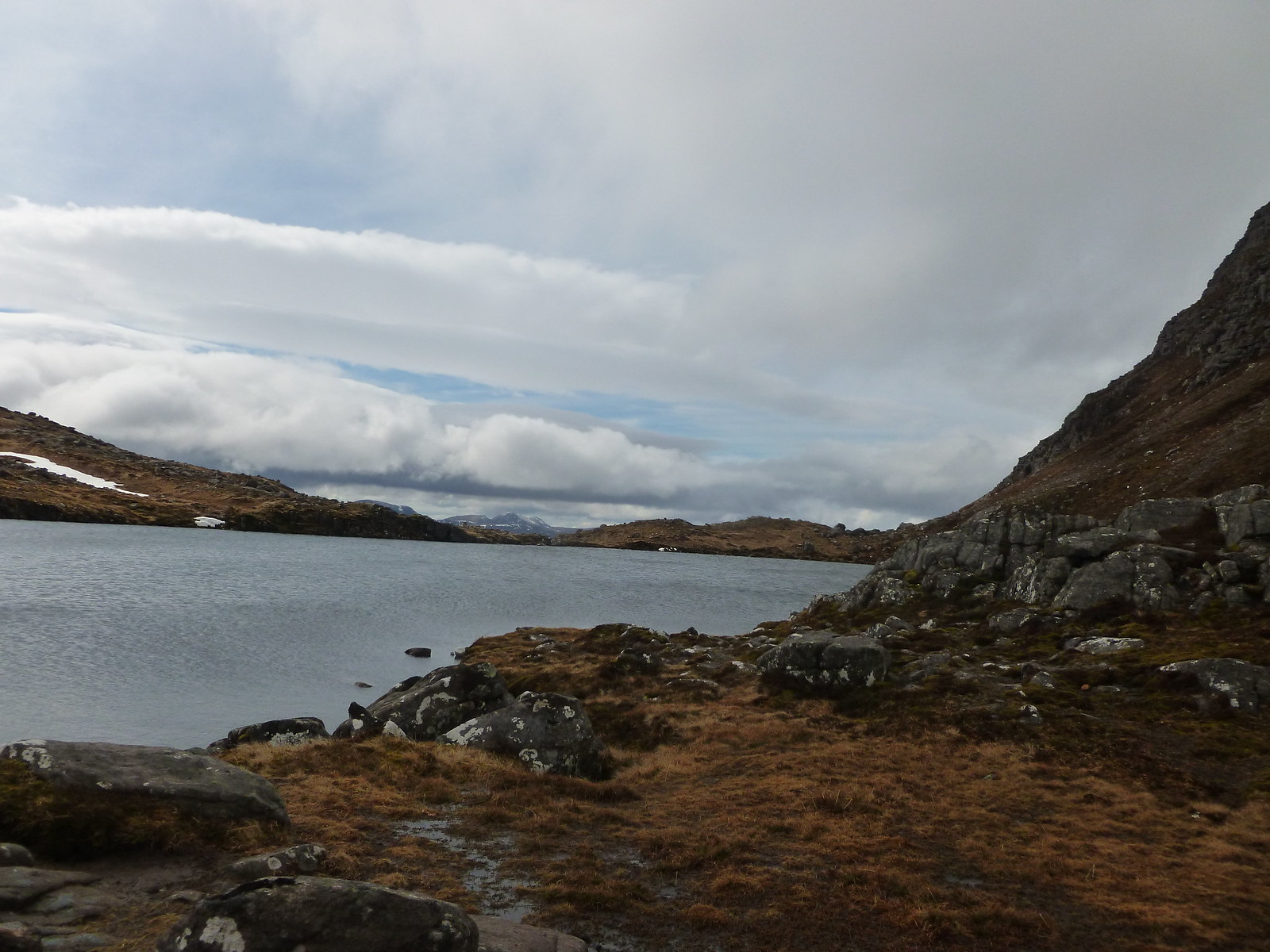 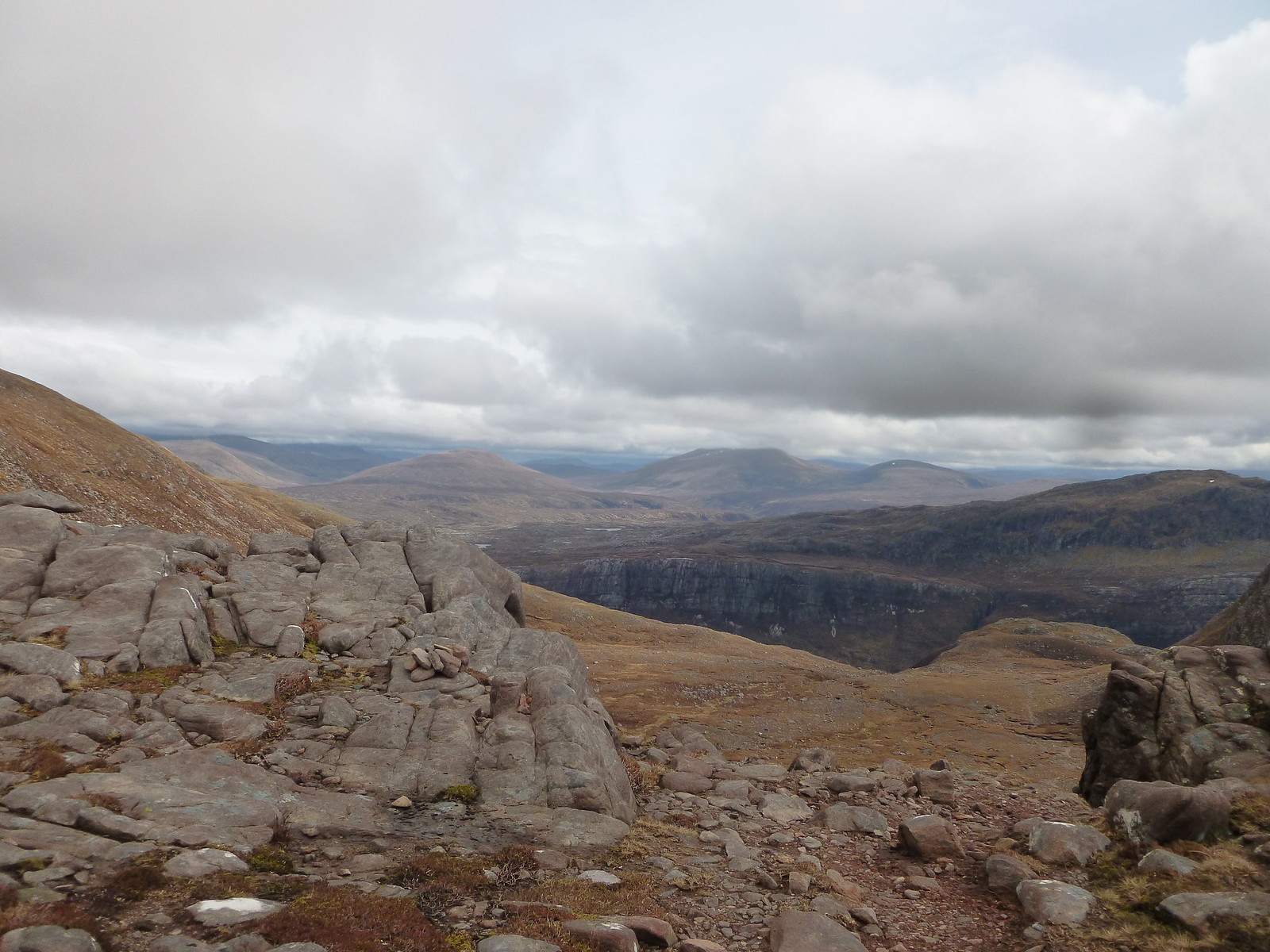 Walking across the coire we looked back and could see the others standing on an outcrop – we gave them a wave and I was surprised that they hadn’t elected to take the ridge after all given the improved weather. We ditched the waterproofs as it was getting warm and continued down, assuming we would be caught up, but it wasn’t to be. 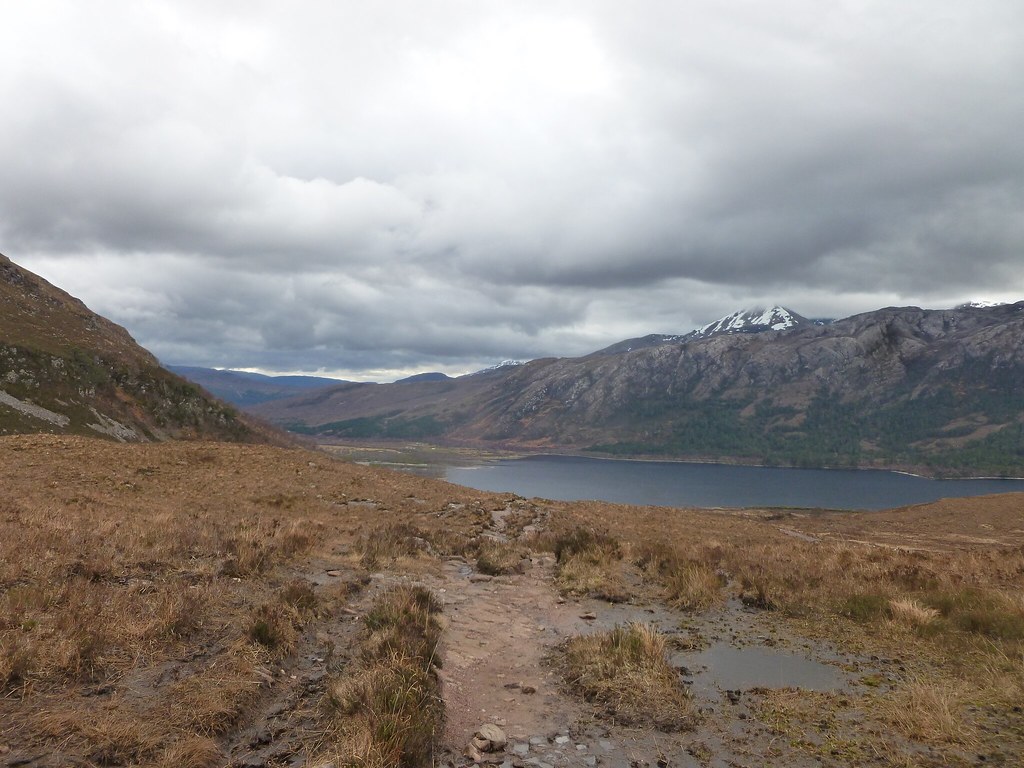 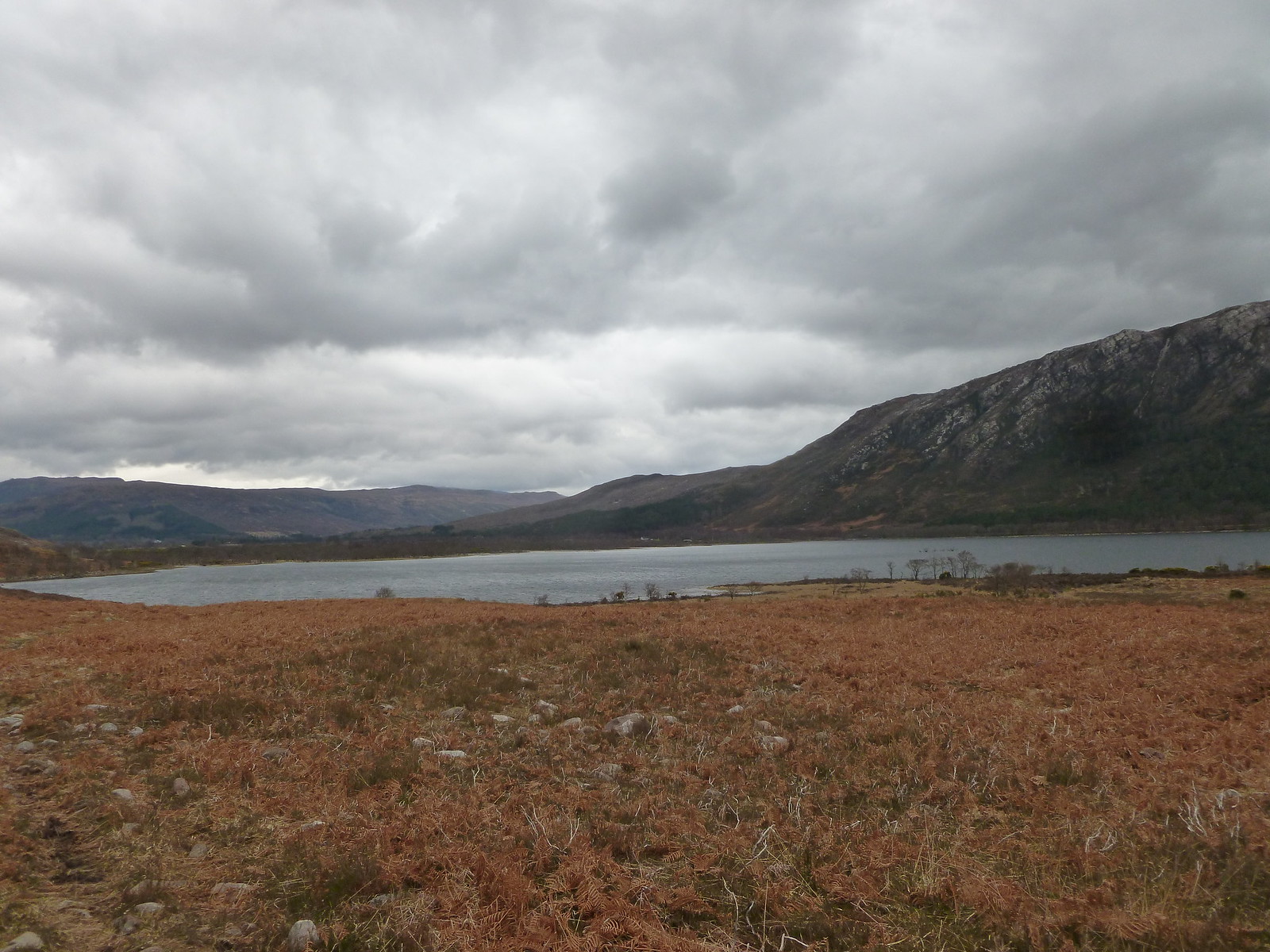 Eventually reaching the bridge and the flat walk out we were knackered and it didn’t feel very flat on the way back!

Looking back to Loch Maree 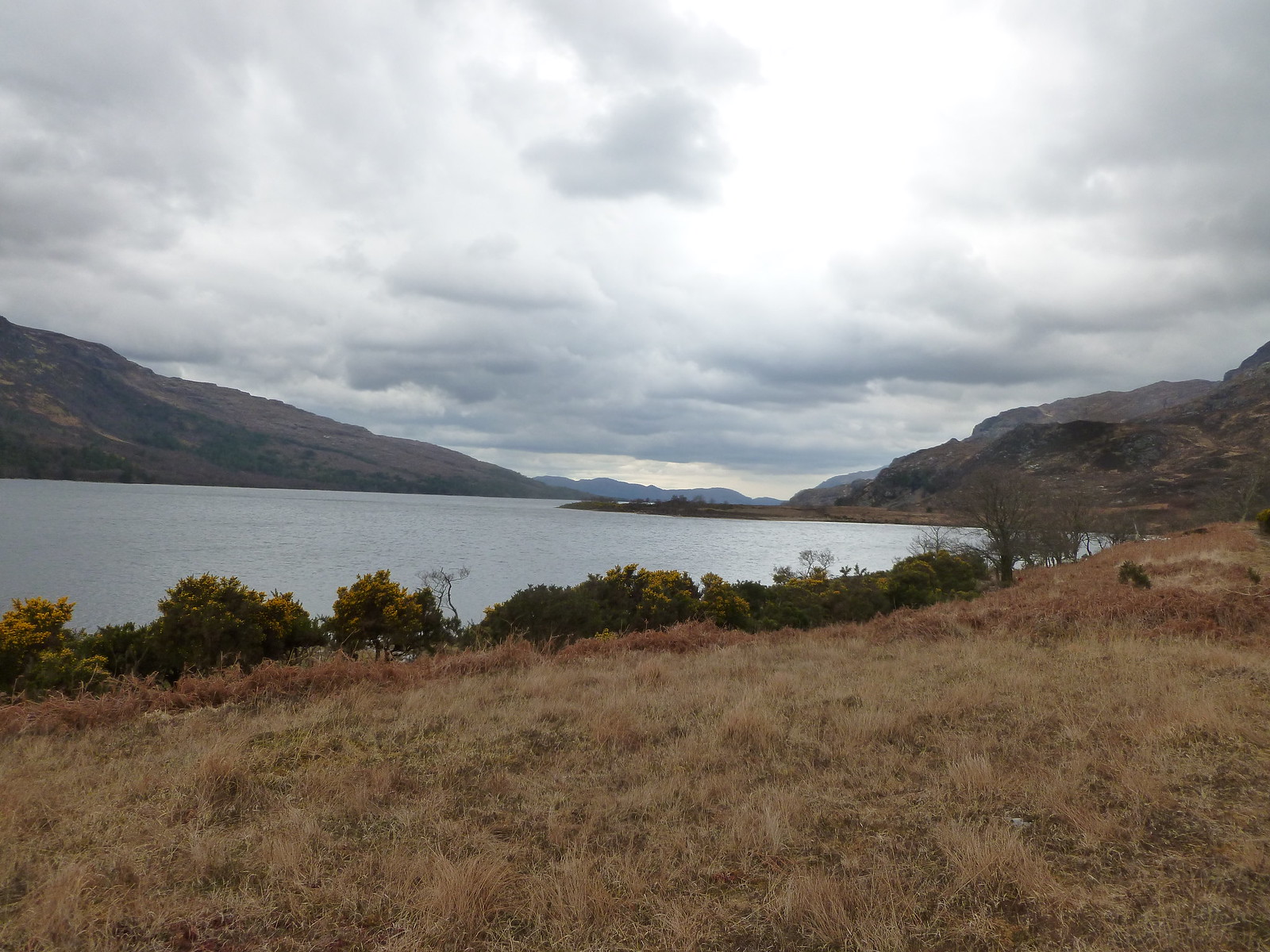 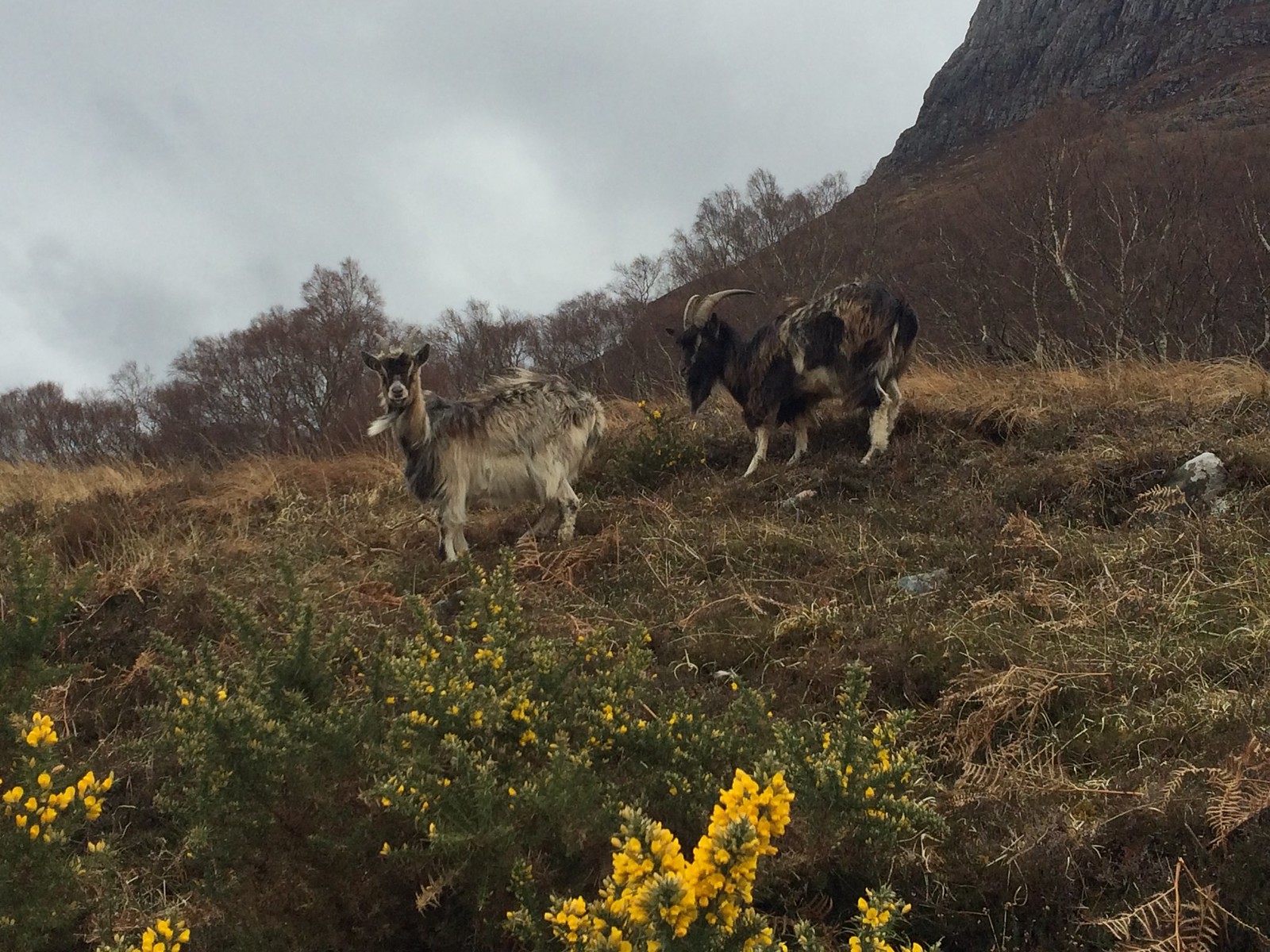 But the views were still stunning and I will definitely return to Slioch in the future to appreciate it properly. But for the present we had a very long drive home

and a lot of photos to sort

That all looks very familiar

Looks like similar weather to what we got Saturday.

Agree, that ridge did look rather enticing...plus the descent off it looked easier. Maybe next time

Looks like similar weather to what we got Saturday.

Agree, that ridge did look rather enticing...plus the descent off it looked easier. Maybe next time

Definitely an excuse to go back one day. Perhaps my second round.....

I was very glad I didn't have much driving to do. Perth to Glasgow felt like a marathon

So often a few minutes makes all the difference

Hugh definitely looks as though the Scotch got him

Ah well, at least you got some views. Would fully agree - go back and take some time to enjoy it properly.

Maybe I'll get to one some time