Gonna try and let the pics do the talking.

Had my best Monday morning ever recently. Should've been driving home to Englandshire after a few days in Crianlarich, but saw a super-favourable forecast for NW Scotland for Monday and, sitting on 93 Munros, I knew what I had to do.

Left Crianlarich at 0500 for an amazing dawn drive through Glencoe stopping briefly at the Commando Memorial for snaps up to the Cluanie Inn for 0730. Walking by 0745.

Saw my last people of the day at 0750 (campers on edge of Loch Cluanie). Just me and the ridge for the next 10 hours.

Stop off for dawn shot at the Commando Memorial Sun trying to break through First view from the summit

Ridge ahead emerging from the rising clag

Looking back to a now clear Creag a'Mhaim (Note on scrambling: This shot doesn't do it justice, but the ridge to Druim Shionnach was the worst part of the day for me as another self-confessed big-girl's(or boy's)-scrambling-blouse.

The WH Stage 3 route description of: 'The final section of ridge before the summit of Druim Shionnach is very narrow and can be avoided by the nervous using a bypass path just off to the left' I would say, downplays the whole utter trauma of it all a tad too much. Which is maybe a good thing, as I would never have done it otherwise. But even bypassing to the left was a harrowing experience.

Conversely, the section later on after Aonach air Chrith did not require any bottom shuffling, as described, and I didn't even realise I had passed the worst of it until it was over.) 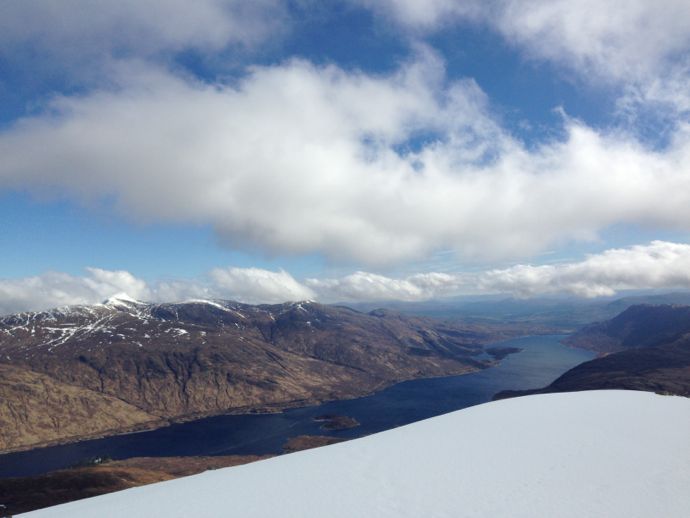 Aonach Mor in the distance to south? Breather in the bealach, hard stuff to the right now behind me Sgurr an Lochain ahead wearing a little hat Skirting Sgurr Beag on the right to get to final Munro of the day, Creag nan Damh ahead Bit of a scramble to get up and over before descent but no dramas, plenty of footholds Escape route down into Glen Shiel Back down in Glen Shiel, looming over from the north, one of the Five Sisters, next on the list

Just a 9km walk back to the Cluanie Inn now!

Fancied a shot at hitch-hiking though, having never tried it in this cosseted world that I was brought up in. Many thanks to the sheep farmer who picked me up and took me to the top of the brae.

No more luck after that, but it was only a 1/2 hour downhill plod to the car, which is a nice warm-down after a day on the hills anyway.

To round the day off, an amazing dusk drive through Glencoe, stopping for an Independence Day-esque show over the Black Mount range with numerous other cars stopping in this one layby. It was very still and mild. But oddly, I heard more swearing from people unable to to express their appreciation than had come forth from my own mouth while scrambling over that ridge today. Amazing sunset over the Black Mount range on way home

Amazing pics of a fab day. Looking forward to doing these in late May,,avoiding the 9km walk back lol

Great report, excellent photos, what a day you had!

Congratulations - what a great way to reach your century!

...and what a cracking set of photos to go with it. Tremendous. Bet you were on a high for ages

I also reached my 100th on the seventh munro on the ridge!

Yep, the pics really do say it all. What a fab day. The Munro-bagger's ultimate fix!!

Hope you get the views in May, GillC. Having been driven most of the 9km back to Cluanie by that farmer, the majority is uphill, so defo one to plan ahead.

Mal, thanks, but I can't take any credit, the photos take themselves on a day like that

That's cool Peter! What did you do for your 200th then? I feel like I need to make each next big milestone just as special.

Katy, yes, a major one - you know when your face hurts from smiling for too long? Like that.

Bod - cheers. Just looking at your Fiddler report. I was up in Assynt the week before too. Crrracking photos, esp. of Stac Pollaidh and Suilven.

And dav, you're totally right using that term 'fix'! It is a drug and I'm addicted, spending ridiculous amounts of money on fuel and lodgings to satisfy the craving. But it's worth it

Looks like you had the weather for it. Have attempted the ridge twice now, both times have ended up in disaster!