Whenever I think of the word Corbett I can't help but think of Ronnie, hence when I set off to climb two of them I had the theme music going round in my head for the first hour or so, and hence the title of the report.

Displaying my usual astonishing social awareness, the fact that a WalkHighlands meet was occurring just up the road had entirely escaped me, so I'd spent a relaxing weekend drinking whisky with various random strangers in Seamus' bar at Sligachan. But by Sunday night I was poised in Kinlochewe and ready to do some walking. Well, itching to do some walking. My legs, having been made to do a weeks' worth of long distances already and then take a malt-laden highland tour, were not so keen.

Sgurr Dubh is one of those hills that I've always felt weirdly attracted to. Here it is seen in summer from Beinn Eighe Whereas from the Glen Torridon road it presents a pugnacious aspect, like a moody bulldog. It seemed to demand respect and to be somewhere I needed to climb, for no readily apparent reason. From the road it looks impregnable but I found this route on WalkHighlands that takes in another Corbett too so that was where I was headed.
The path initially was obvious and easy to find. It passed Lochan an Iasgair and its curious small hut 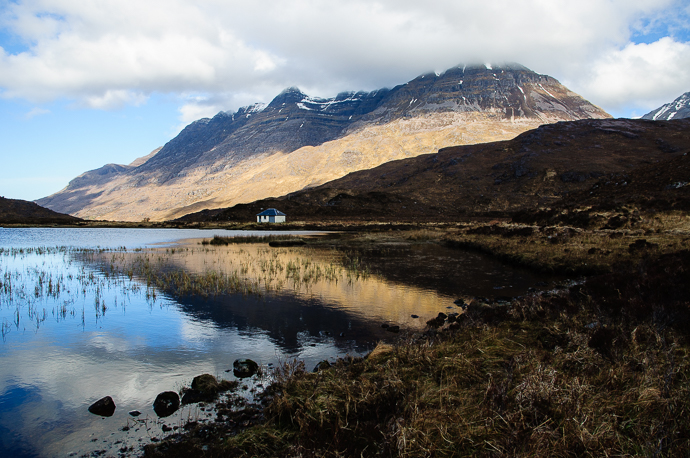 and wended its way upwards into Coire a Cheud-chnoic - The Corrie Of The Hundred Hillocks - which is a glacial drumlin field. This field alone produces 25% of the world's annual crop of glacial drumlins.
It then more or less followed the river, with ever-imporving views behind over Beinn Eighe and Liathach Despite being sunny it was cold. A brisk easterly was blowing in and as I made a stop for a bite to eat and to dig out some gloves a chap caught me up. We were like two ends of the hillwalking spectrum. There was I, wearing about 4 layers of clothing and humping a rucksack stuffed to the gills with cameras, water, food, coats, hats, cuddly toy, teasmade.. no, not those last two.. and there was he wearing apparently one layer of clothing and a rucksack that was smaller than the bag I keep my shower gel in. Two different approaches. He stopped to chat briefly but obviously was feeling the cold and set off very quickly. I snuggled down inside my buff and ate some crisps. I'd see him again later on and would be more intrigued by our very different approaches.
Anyway, the walk guide says the path would peter out, but it didn't - meaning that as I wasn't paying a huge amount of attention to where I was I had gone rather further along it than the guide writer intended. I had been supposed to strike off ESE and head towards the northwest ridge of Sgorr nan Lochan Uaine but this became more of a due-east backtrack.
At this point the character of the walk changed considerably. It had been a nice stroll along a well made path. Now it became more like something out of Total Wipeout as I slipped and slid on wet heather and bogs. Round about this time, I remembered that I had been intending to buy new boots as the soles on mine had no grip left. I think that thought occurred to me around about the 5th time I fell flat on my arse.

The toil of lugging 12 kilos of rucksack up a slippery slope on slick footwear was however offset by the views that started to open up. Finally I reached that northwest ridge and started to toil up it. My legs were really feeling the strain and as soon as I found a big outcrop to scramble up I scrambled up it and then all of a sudden I was on the top!
At this point I became very glad of the vast wardrobe I'd brought with me. Pulling out my second pair of gloves, insulated coat, overtrousers, and sunglasses meant I was able to spend some time looking at the view without freezing to death in the wind. Even then I cowered behind the stone shelter on the summit and made only short forays out from its protection. I discovered that if I stood with my back to the wind and let my arms go limp the wind would hold them up in front of me and I experimented with using this as the laziest possible way to eat crisps, with less than complete success.
It was worth spending some time up there though because the views were pretty special. I'm not familiar with the area between Glen Carron and Glen Torridon so half of what I could see had the added excitement of seeing something new for the first time. And then, just as I'd removed the warm stuff and packed the camera away ready to start walking, a Golden Eagle soared in right over my head. By the time I'd finished gawping and saying 'Oh my God!' and actually got the camera out again, he'd ridden that freezing wind so all I got was a badly-zoomed blur but it was one of those moments - my third eagle, the third one I've failed to get a decent shot of, but who wants to experience those moments from the remove of a lens?
Eventually I left the summit and continued on the route. Sgurr Dubh didn't look all that far away, but the terrain turned out to be deceptive. Initially there's a lot of descending on not very pleasant ground - especially in worn out boots

I stopped to take a few photos by a small lochan. Looking back I noticed someone on the summit I'd just left. I turned away to open a cereal bar wrapper and when I turned around I saw a person actually running towards me. It took him about 2 minutes to cover what I'd done in about 15 and I was not surprised to find out it was the lightweight chap I'd met earlier, who had apparently already been to the summit of the neighbouring Munro of Beinn Liath Mor and whose protection from the wind consisted of a miniscule orange cagoule. He didn't appear out of breath and the benefits of travelling light were beginning to appeal to me down here out of the wind. "You don't hang about." I said as he flashed past. "Kids to pick up" he replied. Now I felt a little less overdressed as he jogged away while I snuggled inside my Primaloft cocoon with a chocolate bar and a cup of tea, safe in the knowledge that absolutely nobody cared how long I was up here for

From here on, the route towards Sgurr Dubh was a genuine navigational challenge. The guide says it's no place to be in mist and I'd completely agree. Even with the benefits of a clear day and being able to see where I was heading for I often found myself coming to the top of a promontory or sheer drop that required me to backtrack slightly and work my way around it. The idea of taking a bearing and following it towards Sgurr Dubh would simply not work up here. OTOH I think this would make a fun route up to Sgorr nan Lochan Uaine, as there would be a myriad of scrambling options.
It felt a long way down, and a long way along, before I was finally in sight of the route to the summit of Sgurr Dubh. Sadly, all of the exciting-looking rocky crags that I'd been thinking would make an excellent scrambly route up were a little too high and a little too steep so I had to slog my way up the scree. This, I have to say, was not enjoyable. Yes my legs were tired and I was not as hill-fit as I thought I might be, but even so it was hard work. After climbing a rockfall that is the only passable route through the crags, the route pretty much makes a bee-line for the summit up the scree-ridden southern flank of the summit bulge. And unlike its neighbour, the summit of Sgurr Dubh seems to get further away the more you walk towards it. The oddest thing though, given the name of the hill, is that all the rocks are a glaring brilliant white. Still, at least there wasn't any wet heather

I was done in when I got to the top, and the wind had now picked up to such a level that I was actually scared of going too near the edge. Nevertheless I managed to get a couple of photos. 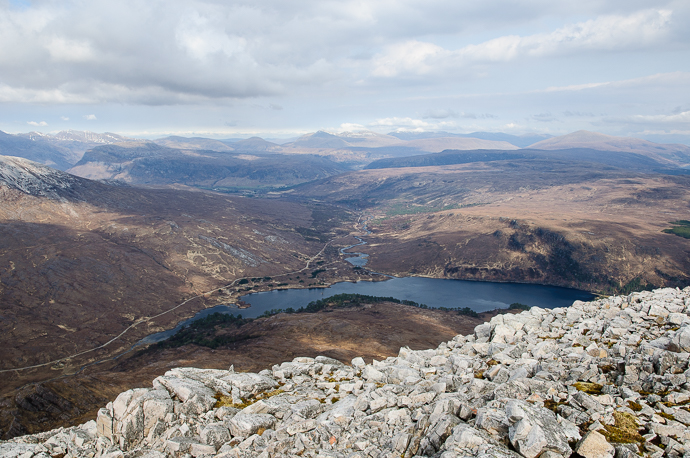 Possibly it was due to the wind - which could now only be described as ferocious, but the summit of Sgurr Dubh felt very inhospitable and so I didn't linger very long in this place I'd dreamed about for the best part of 5 years. Instead I made my way back and picked a route down the extremely steep and slippery north-western flank of Sgurr Dubh. I pretty much just headed for the Ling Hut as soon as I could see it and picked my way back through the drumlins to join the path not very far from the road.
It was an enjoyable day, but the first half was by far the best of it. For a nice walk with good views I'd reccomend Sgorr nan Lochan Uaine. Perhaps there's a reason Sgurr Dubh looks like a grumpy bulldog and it's better to just leave it alone

Torridon in all it's beauty...clear views in good conditions, but also the 1st one from summer looks more than great withn the dramatic clouds

Great report on two rarely discussed hills. They might not be as spectacular as the Torridon and main Coulin hills, but the views make up for it. I remember SD as tougher going and SnLU as pretty easy, I think we added Beinn Liath Beag too.

My feelings on these two exactly from the summit of the first one to SD was not too pleasant and neither was coming back off SD. Some fantastic photographs you took, what an area he views all around stunning. As the books say not a place to be in poor visability in fact I think it would be horrendous

Enjoyed your report and photos, especailly as we hope to these soon. I've never seen an eagle and am so jealous.

Thanks guys, it was definitely a day of two halves

I still think in retrospect that Sgurr Dubh is worth doing, as the views are rather good - it definitely makes you earn them though.