A morning quickie in a hurricane

A morning quickie in a hurricane


After a day of being battered by the weather at Loch Lochy, I wasn’t sure I massively fancied a repeat performance at Newtonmore, especially as the wind was supposed to be worse – mid 40s with gusts up to mid 60s…

However, I didn’t want to totally waste a day. After googling “how windy is too windy” for a while I decided that I should be ok so long as I picked something rounded that I couldn’t get blown off

Finally settling on Geal Charn as I had a print out of the map and instructions. I wouldn’t normally like to go out without a proper map but as the visibility was supposed to be “very good”…

The day began. My stuff was all dried out and packed the night before, my porridge didn’t boil over (!) and the view out the window of the Grey Corries was encouraging. Google map loaded up on the wifi the previous evening, I set off

All was going well until my proposed left turn at Ardverike… it appeared to be a rutted track….

”I’ll give it a go” I said, however, 20 metres later was a locked gate and a notice saying no entry…

Quickly aborting this route, I attempted to reverse back down the track, proving that my driving instructor’s admission years ago that I was more accurate backwards than forwards was either untrue or extremely worrying…

Fortunately I now had mobile signal and had a look at google. It looked like a road….

and here, is a prime example of why following a satnav is a terrible idea

I pinged a friend a message asking for advice (I think it read more like “HELP!!”) and he confirmed what I had since realised – I had to go via Laggan.

Eventually arriving at my start point, it was extrememly windy…

As I was putting my boots on it started raining. I discovered that putting boots on inside a car was very awkward when you own a Polo

Waterproofs on straight away, I looked out the window and decided I had better at least give it a go now I was here!

Following the instructions, I crossed General Wade’s bridge, followed the track and crossed the 2nd bridge by the hydro works. 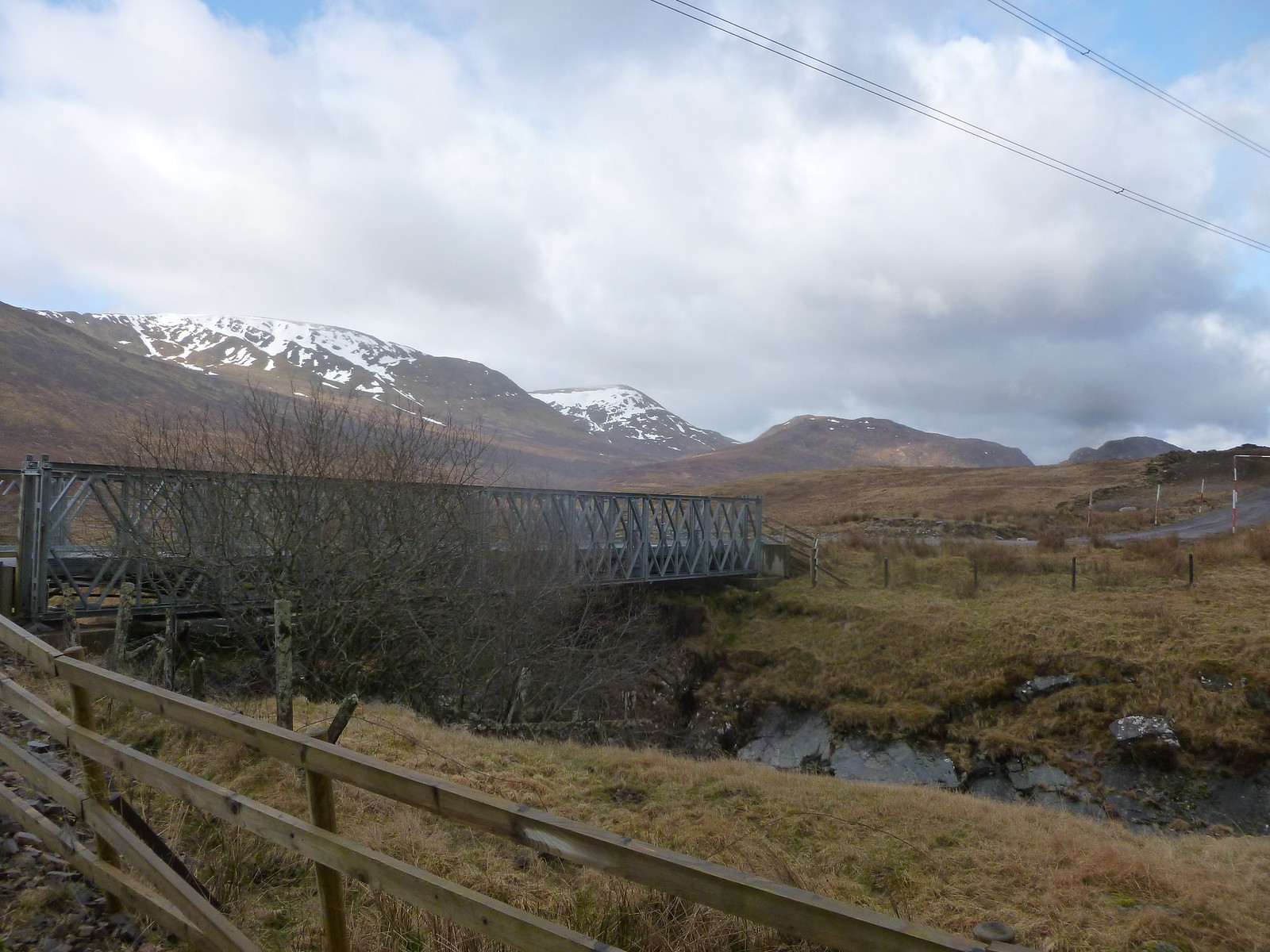 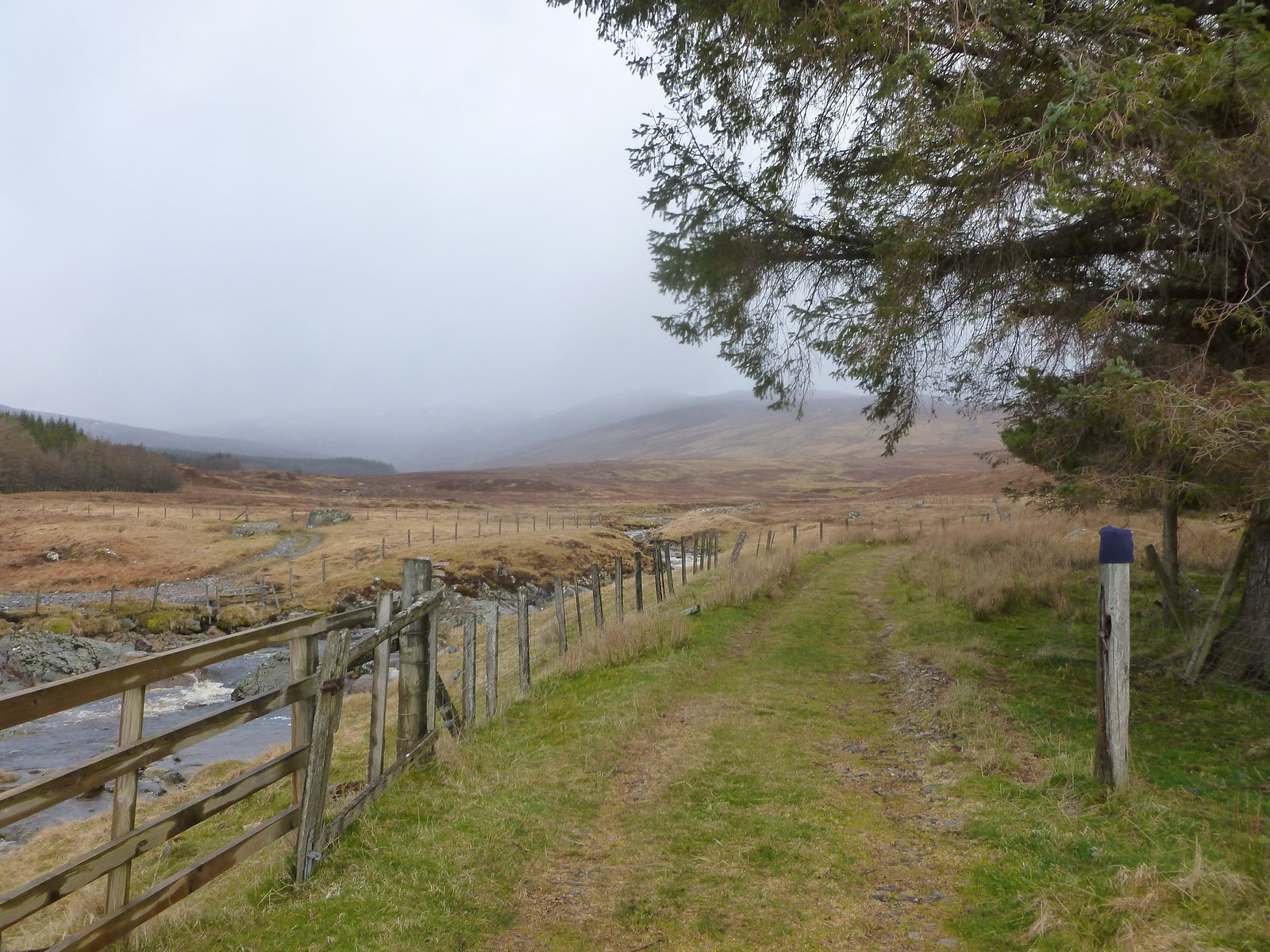 Here I encountered some confusion as the deer fence I was supposed to cross didn’t really exist, and how soon is "almost immediately"?

I was unfamiliar with a 1:25000 map, and it didn't give me the level of detail I was used to, so spent some time with a look of confusion on my face

I ended up following the track for a bit then cutting across a big squishy open bit of moorland towards what I thought must be Geal Charn; hiding in the clag.

However before long the sun came out and everything felt much better. 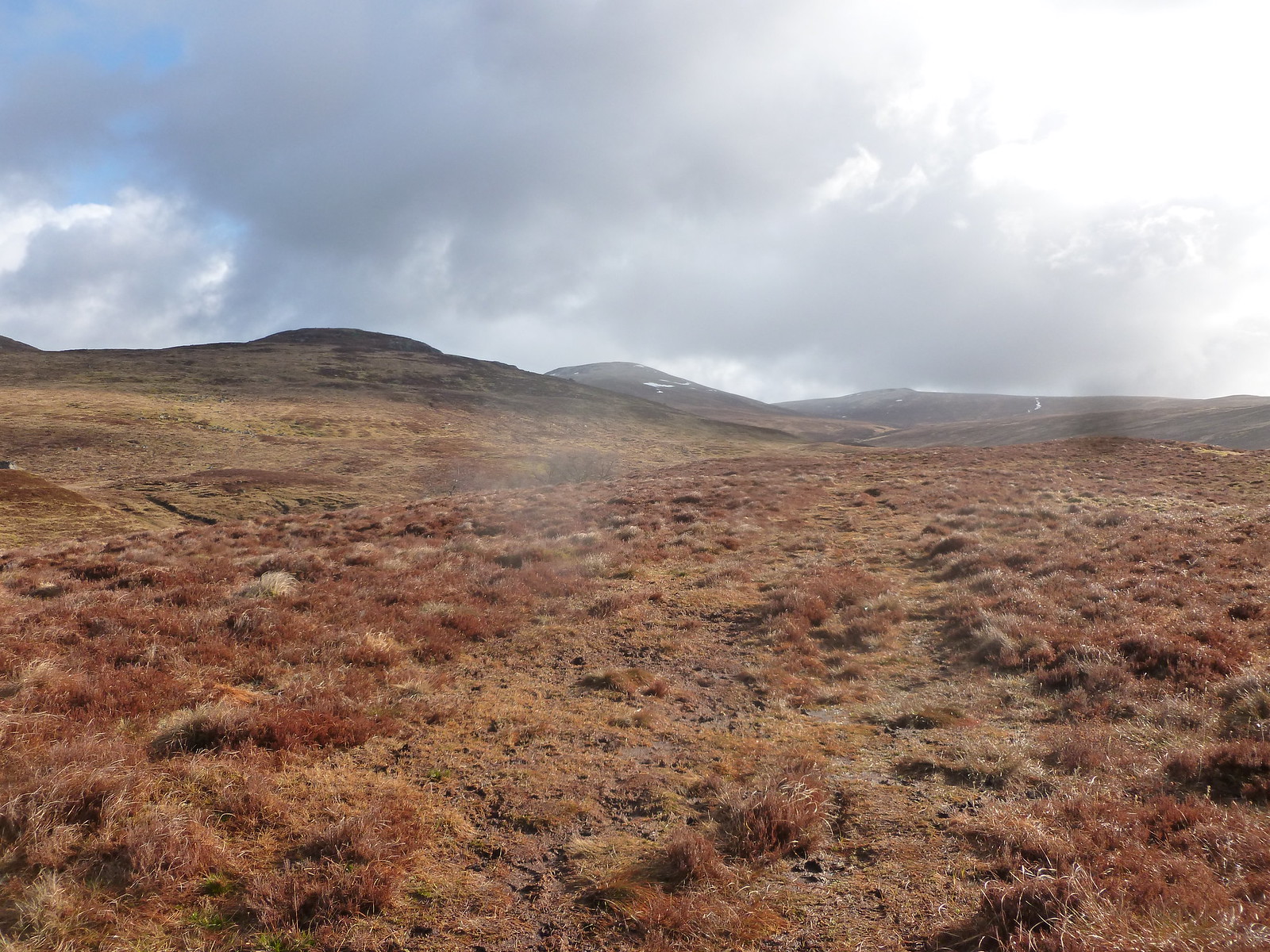 I think this must be the back of the Meagaidh hills? 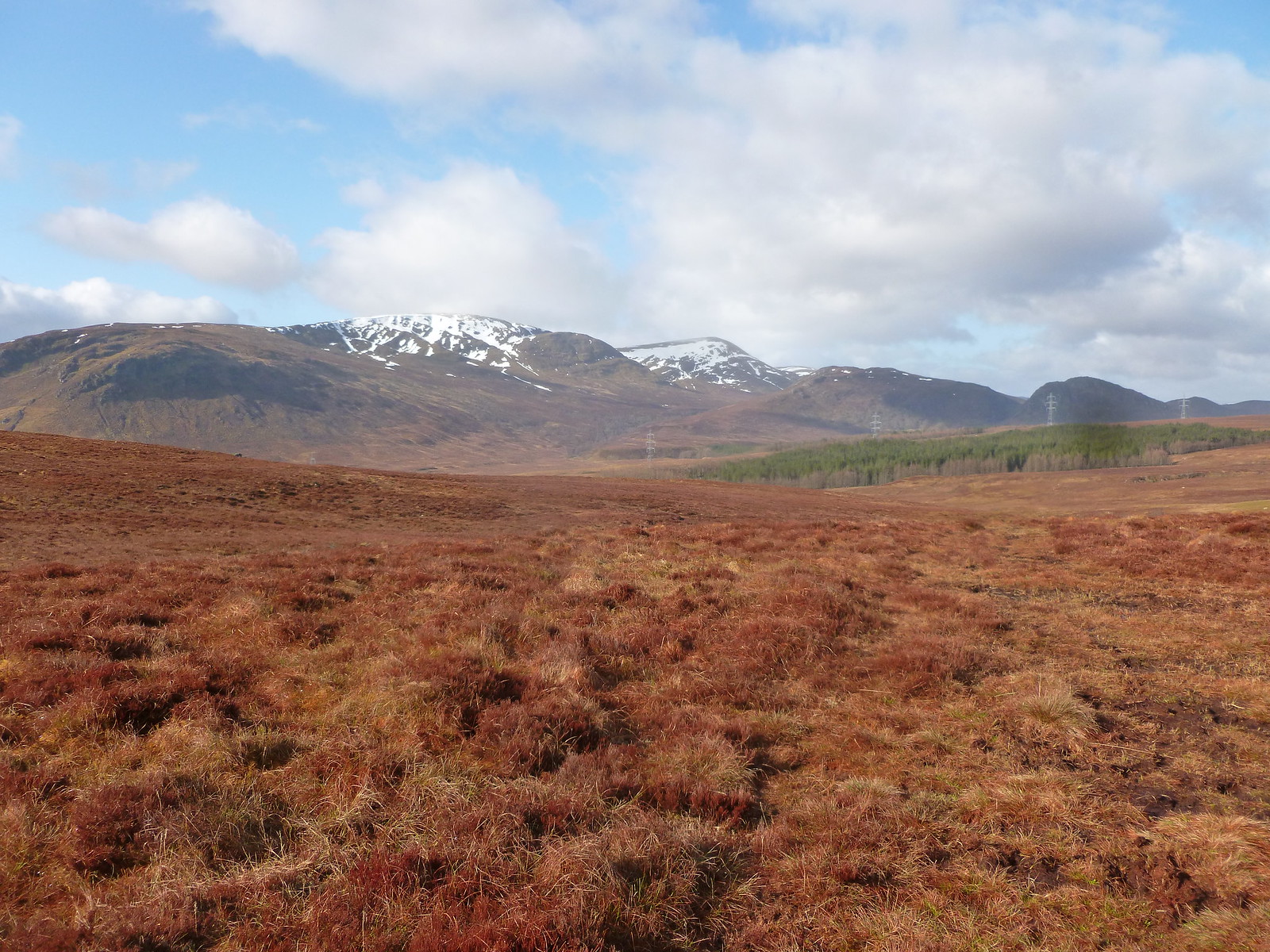 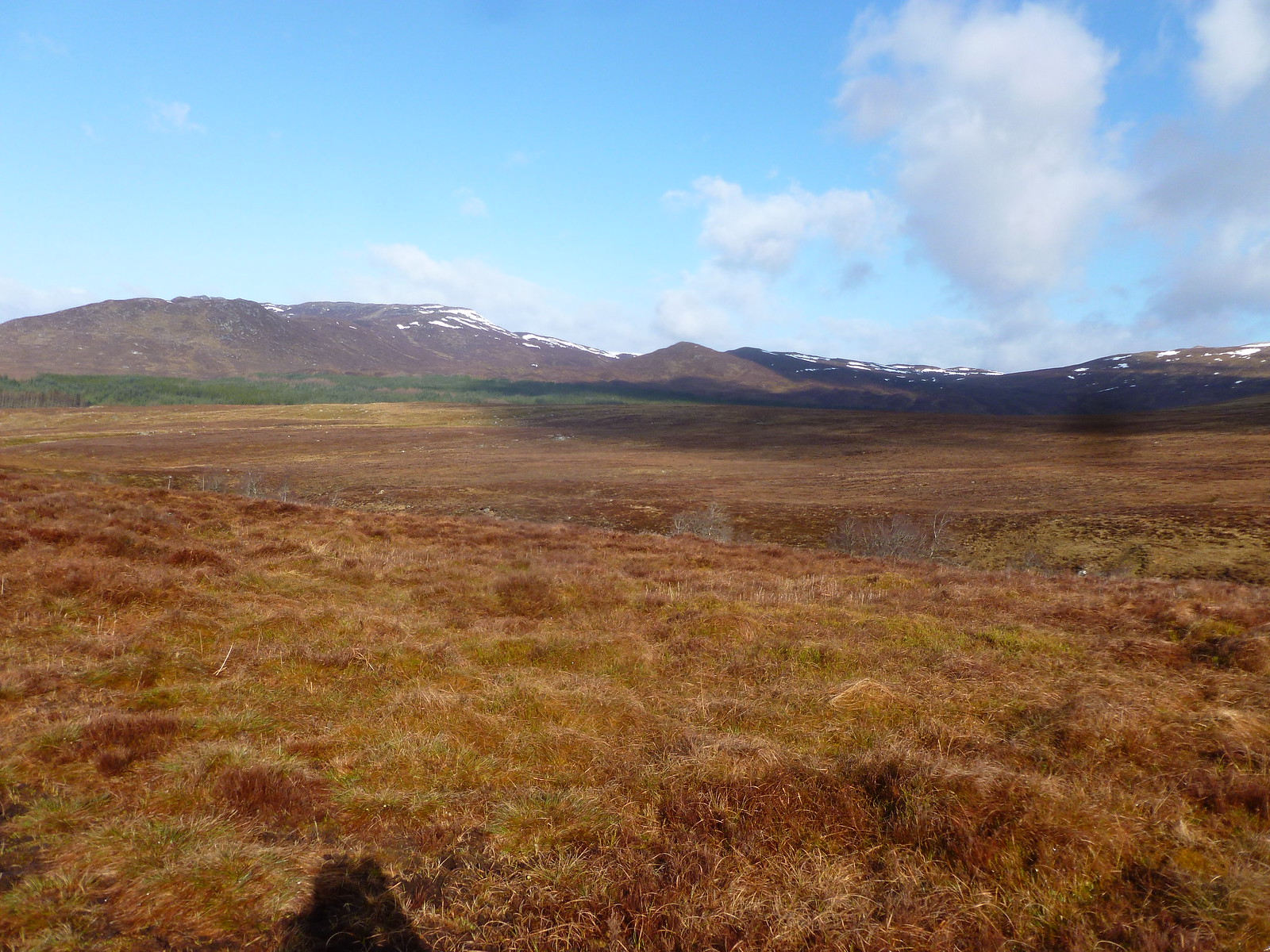 I realised that all I needed to do was follow the right hand branch of the river so headed over towards that. Hurrah there was a path!

Finally picked up a path! 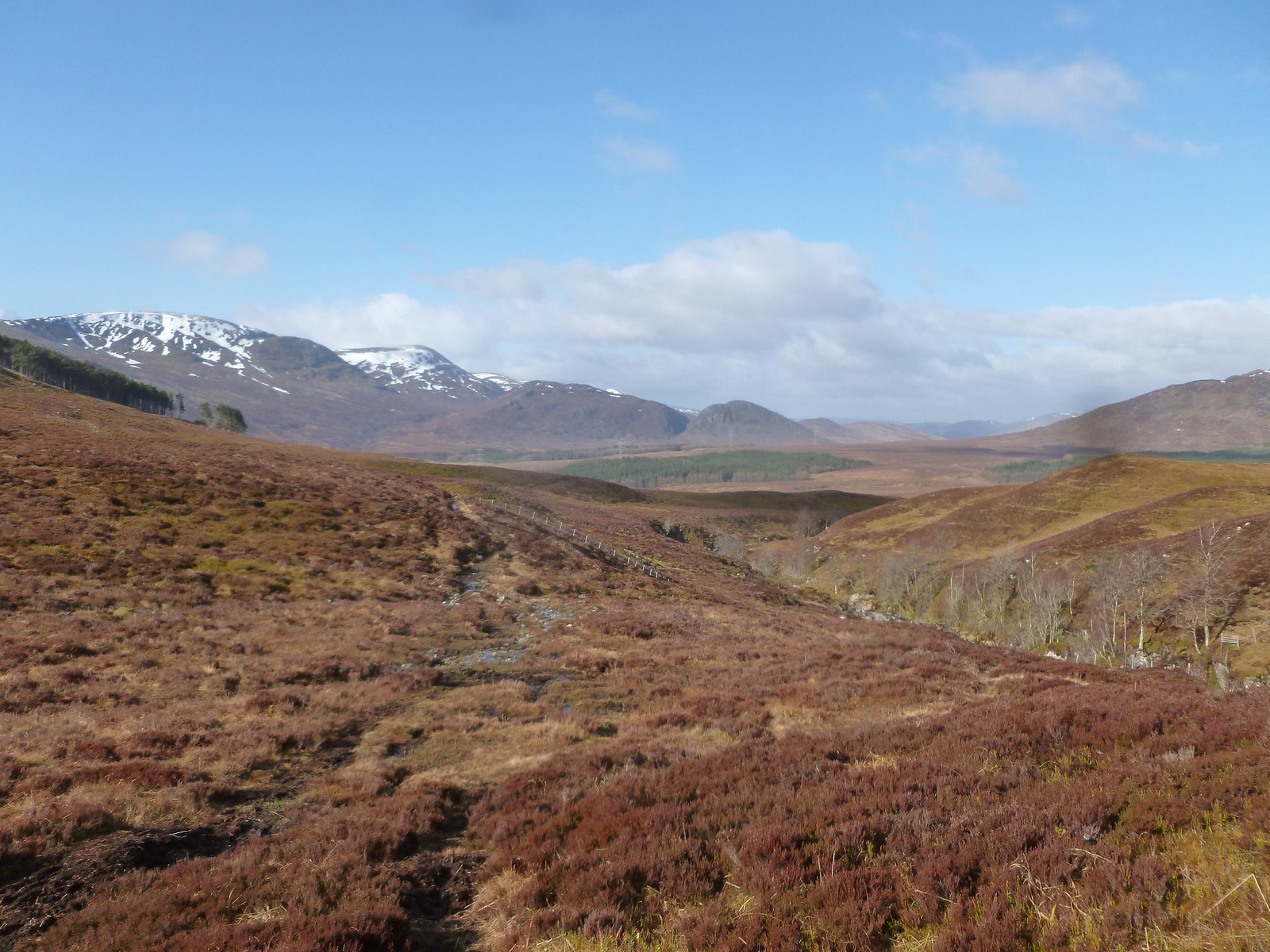 It was fairly squishy but clear and led over a stile and to the Allt Corie nan Dearcag which required crossing. I really hate river crossings, and this one was no different. There were plenty of stones and as it turns out, nothing very technically difficult about it, but the rushing water below me makes it all feel so much worse

Fortunately I got across unscathed!

After this, the path was clear for a short while before sort of disappearing. It turned out coming down that I had just lost it, but I made my own way along, gradually climbing. As I got higher, the wind grew stronger but as I was below the height of the ridge it was manageable. 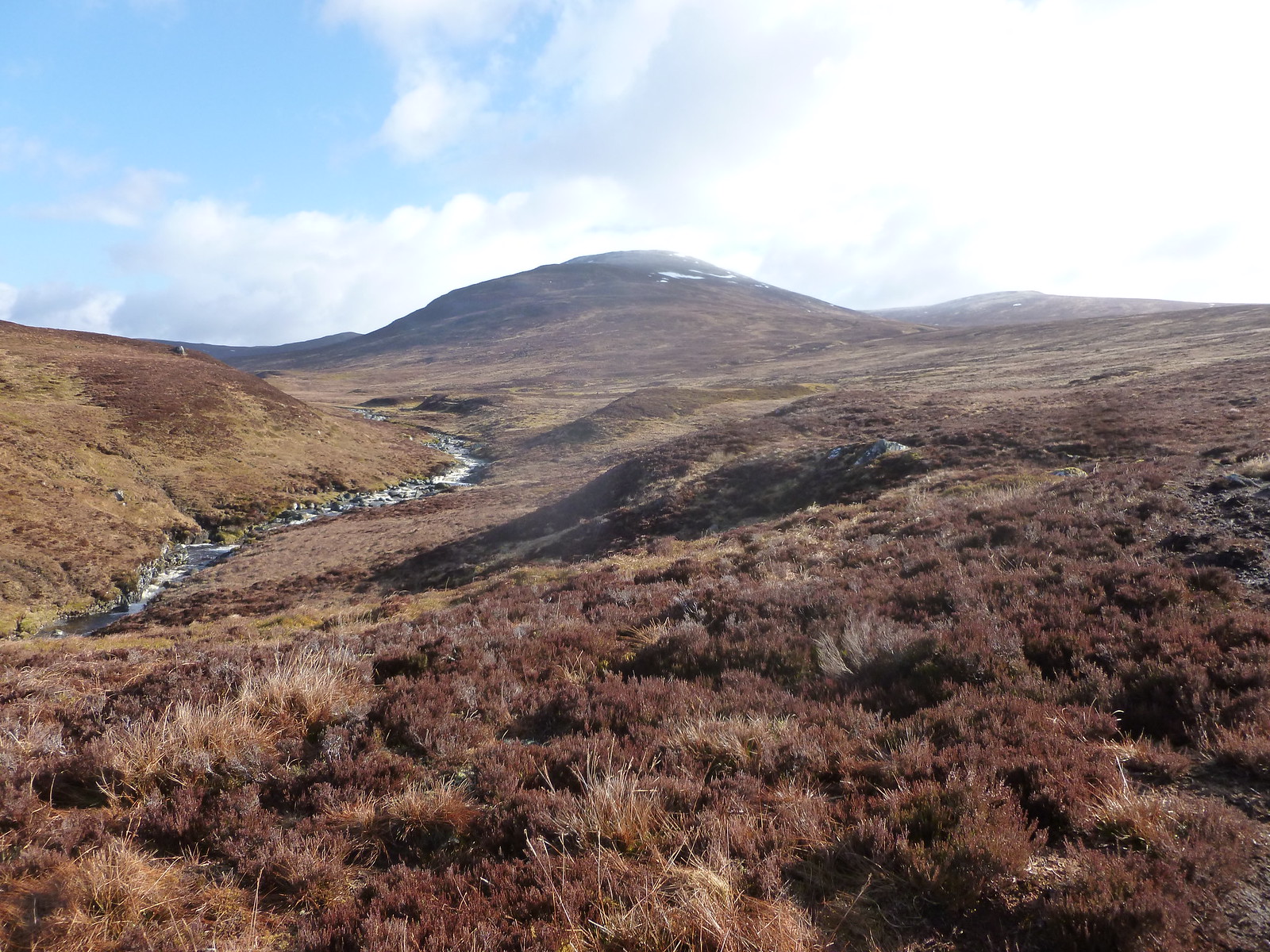 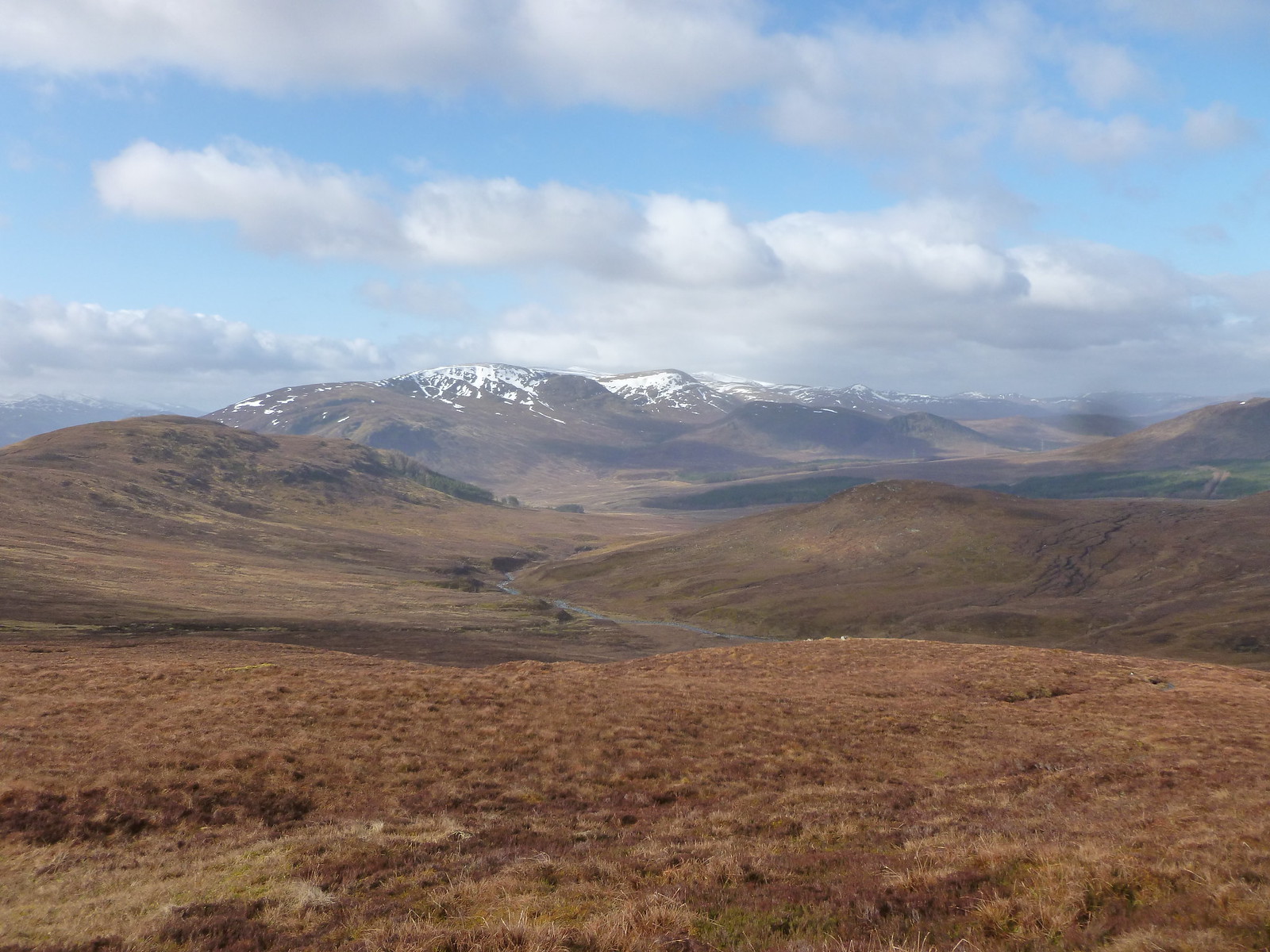 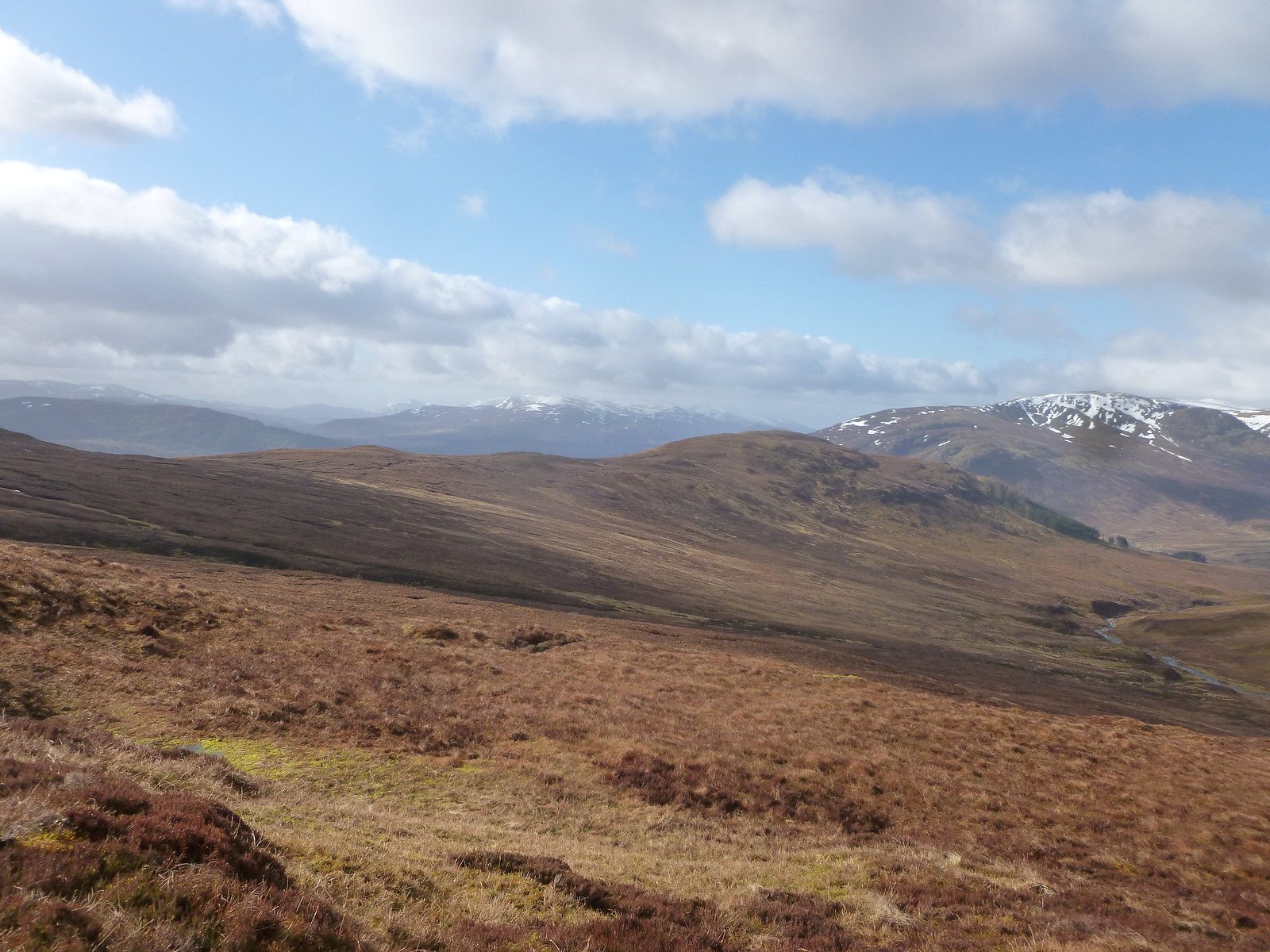 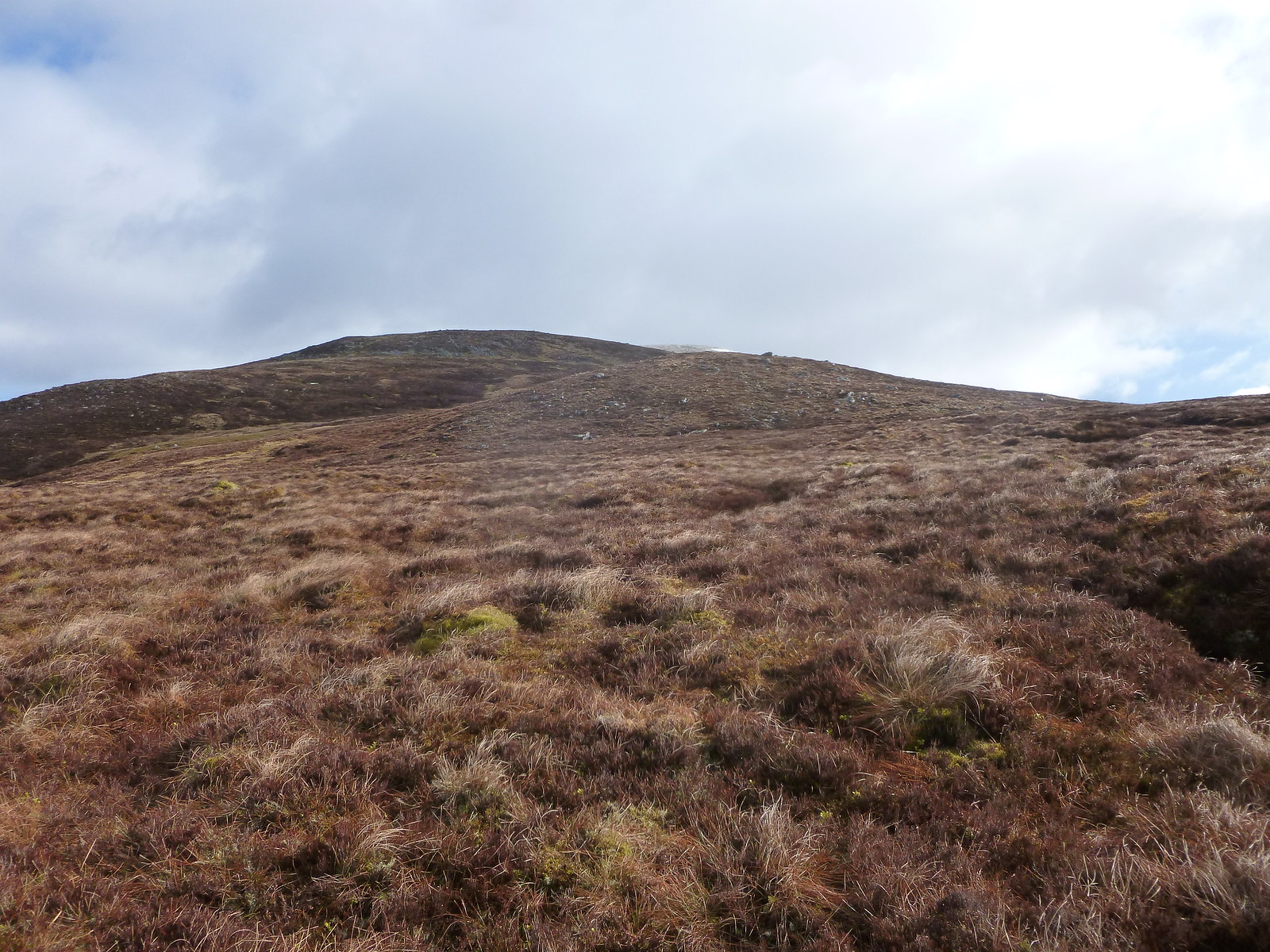 I started to climb higher and I realised that I was going to have to brave the ridge at some point! Eventually making it up, I noticed a path heading up a bump in front of me – making for that, I followed to the top of the grassy shoulder before setting off up the final pull to the summit.

There was a small amount of snow here, looking more like frost and causing no issues under foot. This last bit felt like it was going to go on forever – I guess I was tired after the previous 2 days and I was being savaged by the wind, making walking difficult at times. I gave myself an energy boost with a coconut macaroon – all in one go this time, after my experience yesterday…

Looking back from the top of the climb 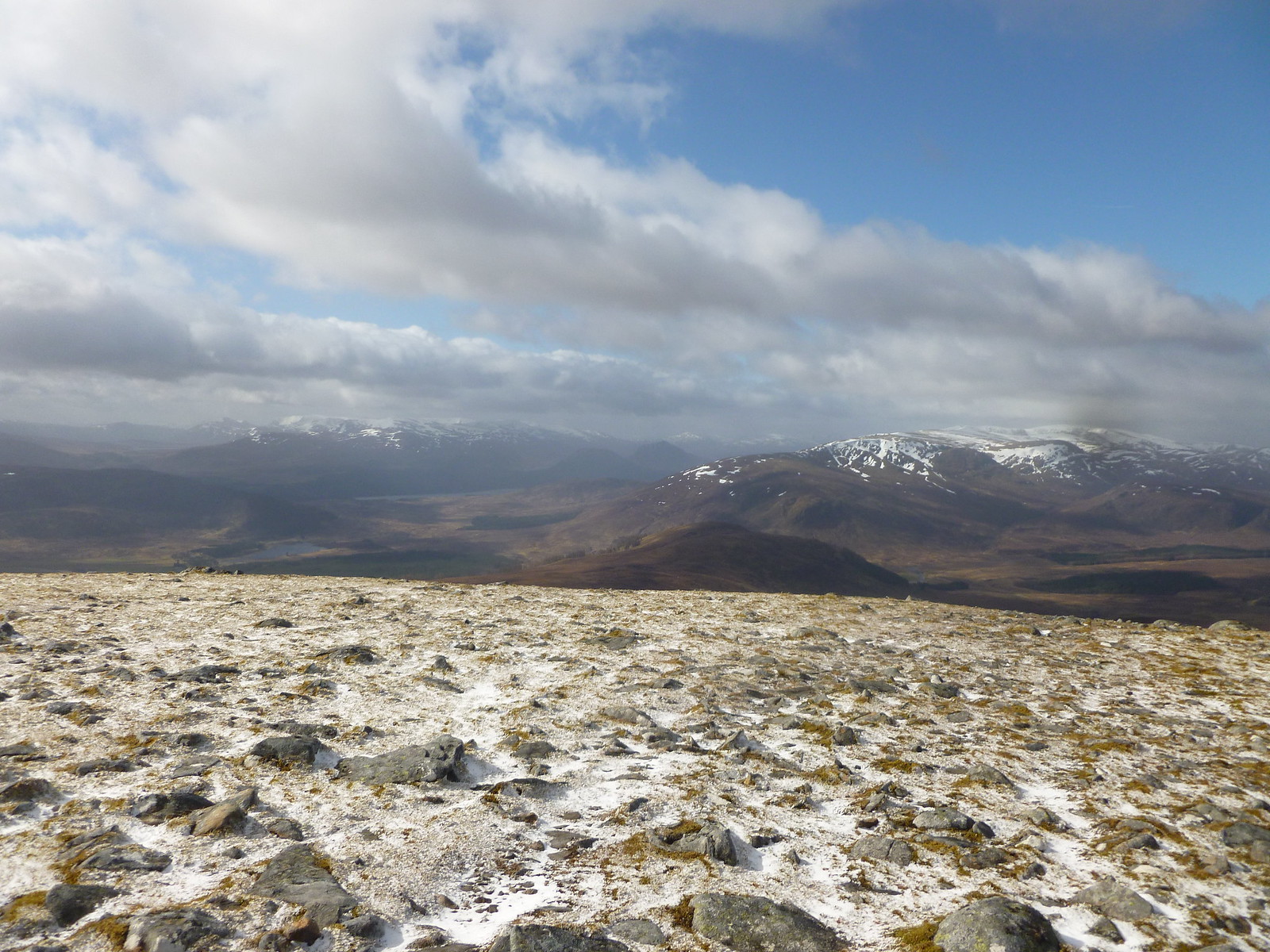 There was no real danger so I continued, eventually reaching the plateau. I could see the summit cairn 700m ahead, and no kidding, it was enormous. 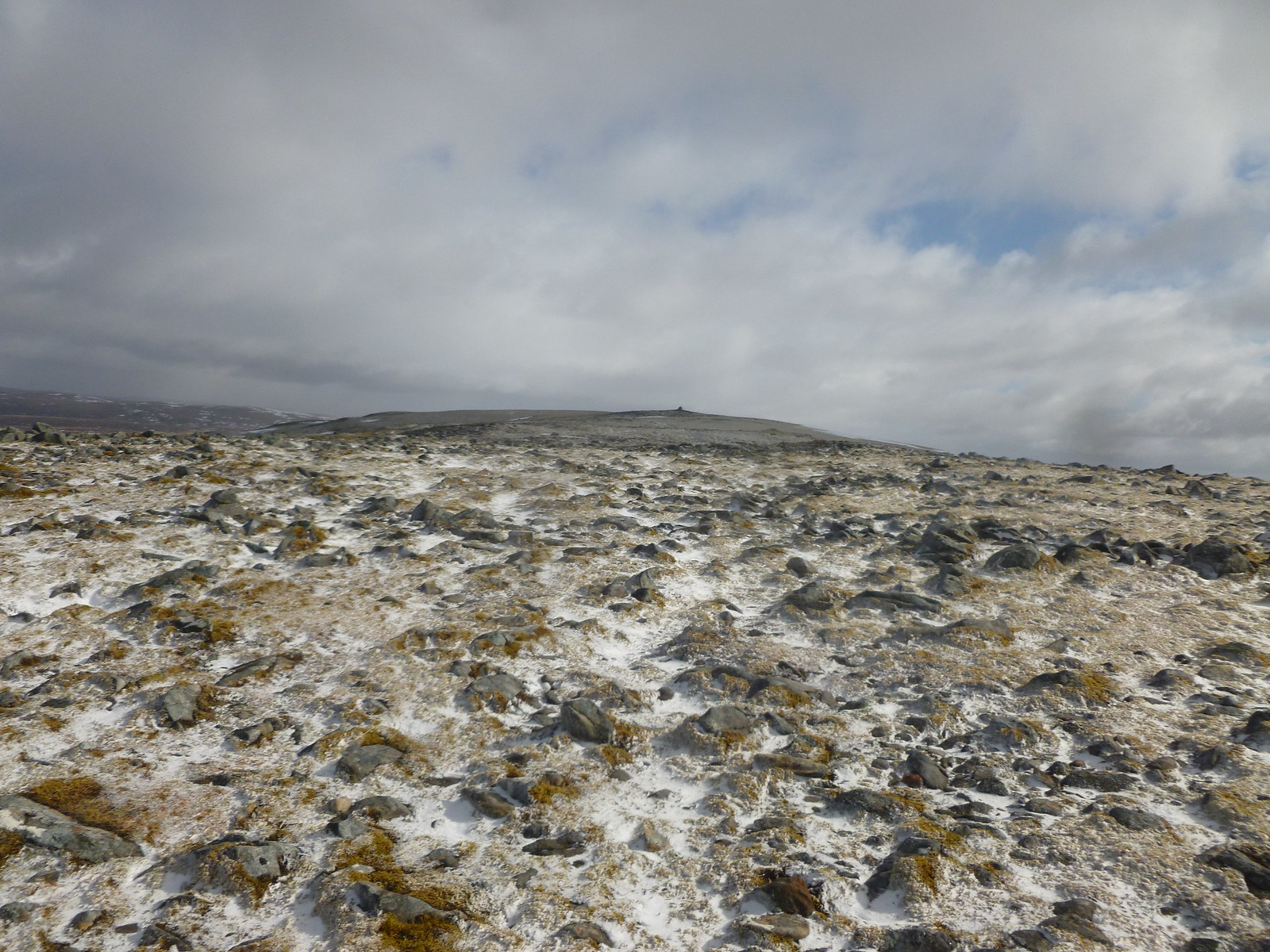 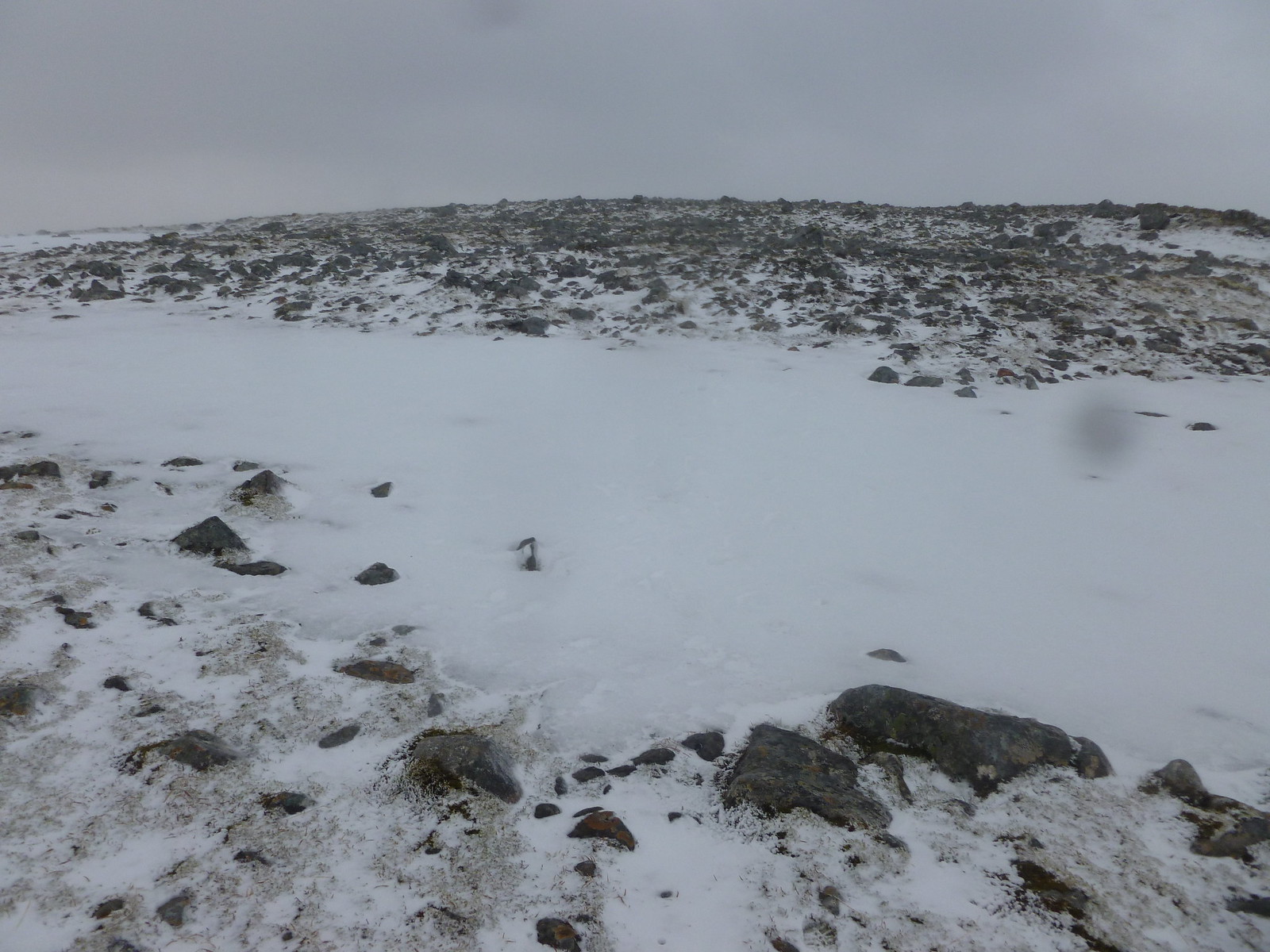 I fought my way across to it and dived behind, so grateful for the shelter from the battering. I quickly put some extra clothes on and did my ninja impression again. 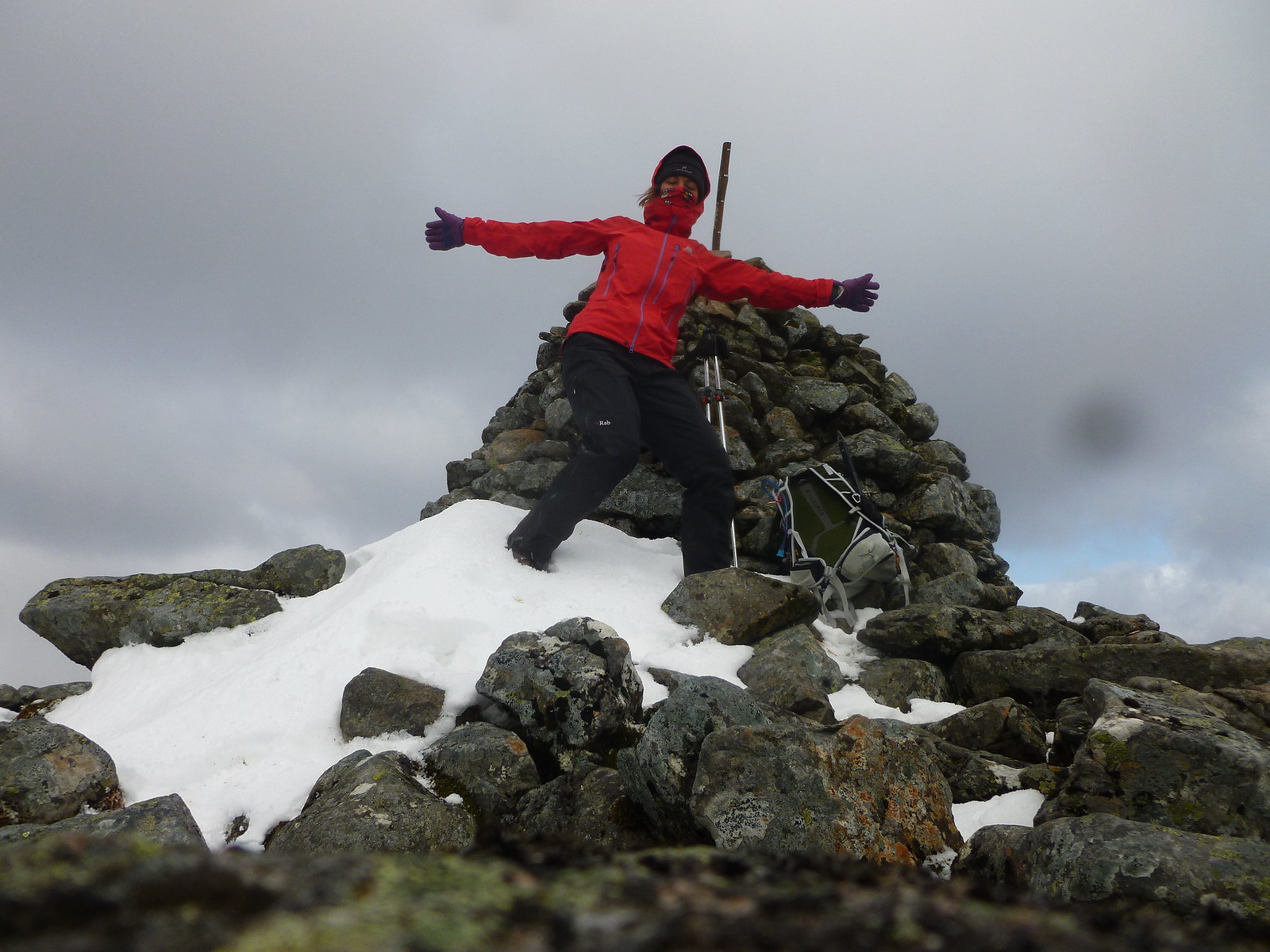 Vast openness to the North 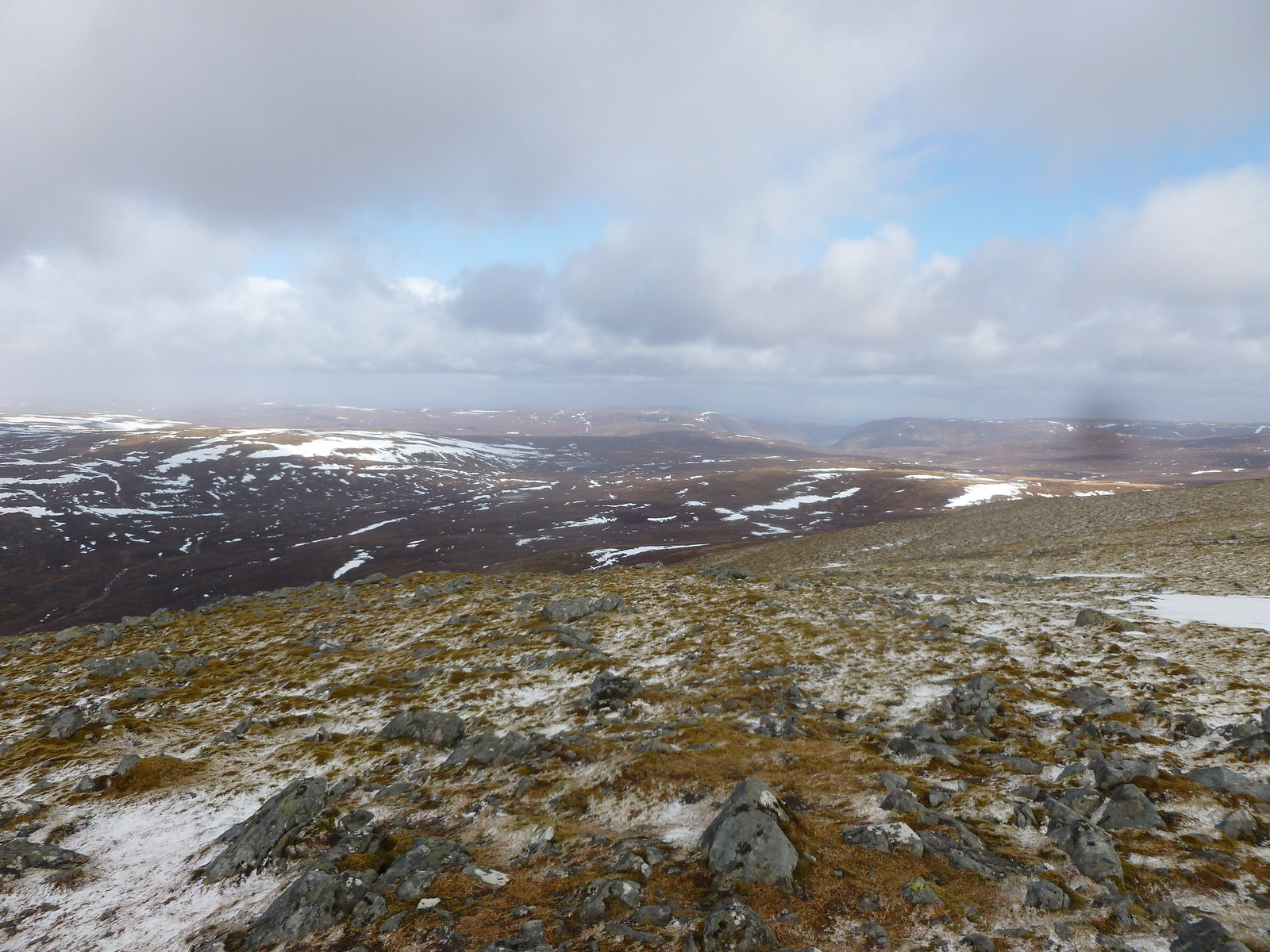 Having read Bod’s report the night before, I had liked the idea of heading back via Scoob and Fi’s “wee window” and I started to head that way, before turning round and realising the weather was closing in – I could barely see the giant cairn!! It had also started snowing and the wind was blowing this into my face and eyes. Quickly retracing my steps back to the behemoth cairn, I initiated plan GTHO – “get the hell out”

The return route was simple – retracing my footprints across the top and following the path back down. I actually managed to follow the path this time, although there were large sections that could easily be mistaken as swamp. My route up may have been pathless but it was significantly drier! 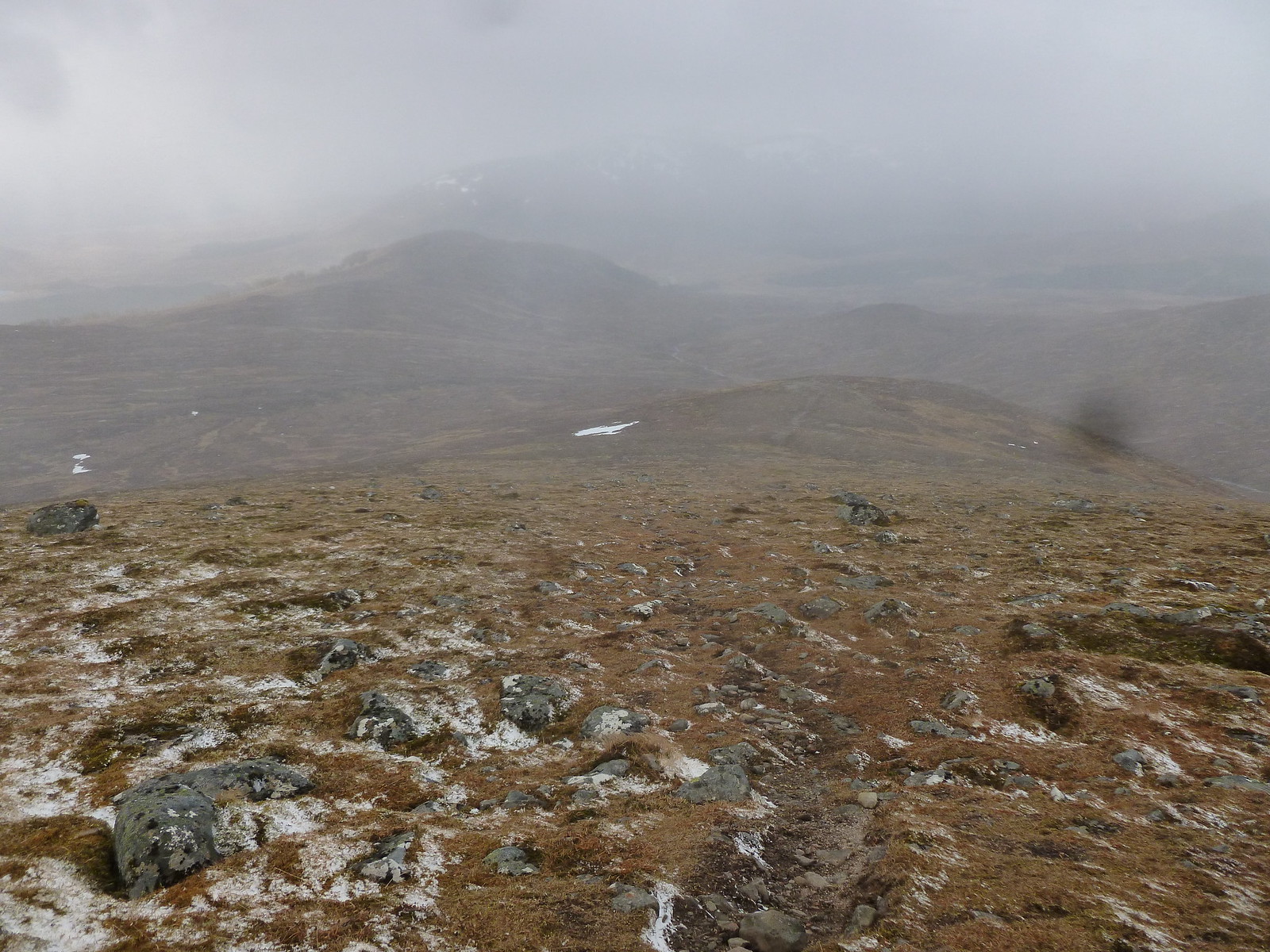 As I descended, the snow eventually turned to rain; wetter but less painful on the face. Approaching the river, the rain even stopped and views returned in some directions. Again the river crossing was managed without any mishaps and I made my way back over the style. 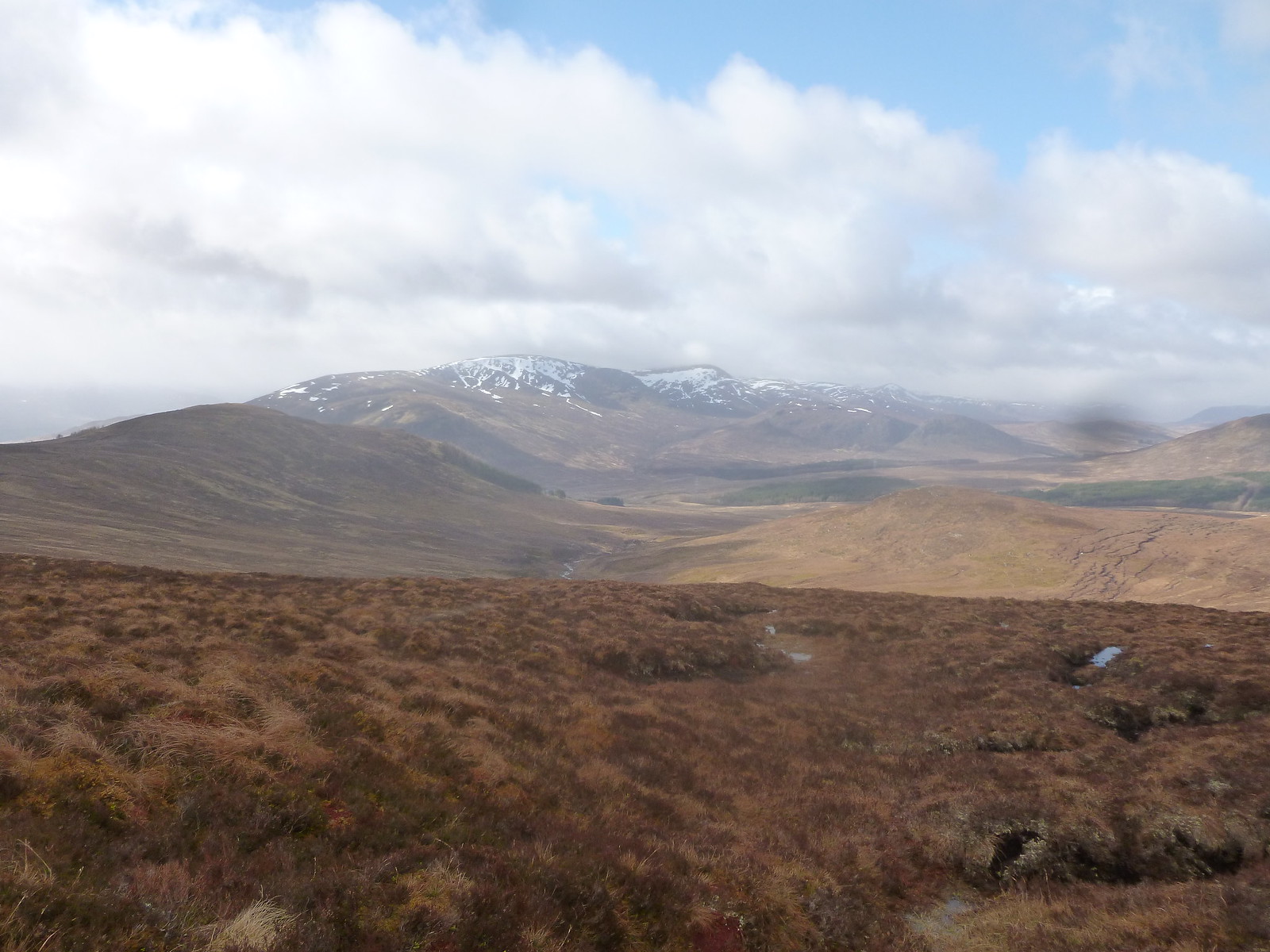 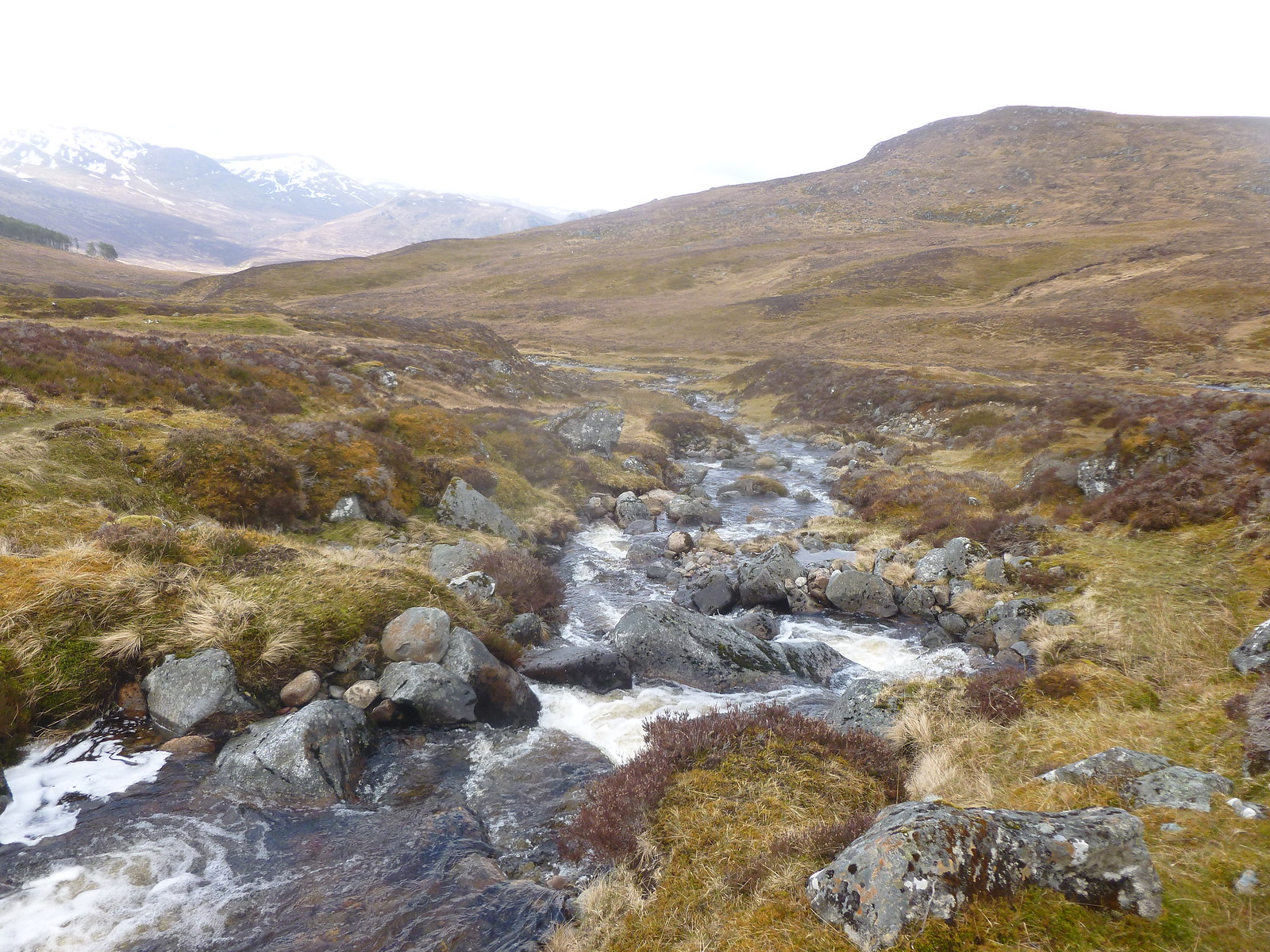 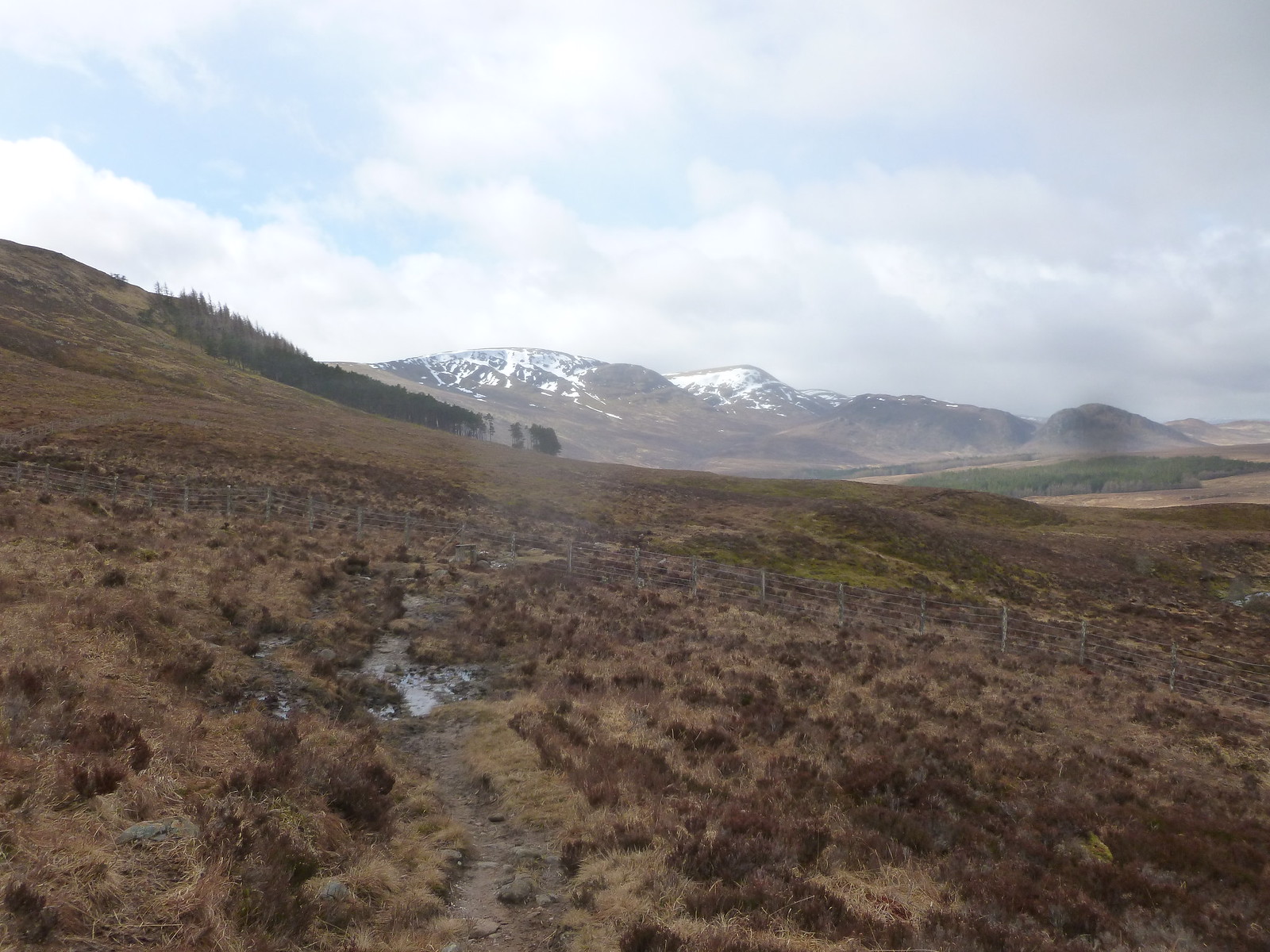 After this the path was so wet that I abandoned it and headed straight over the grassy hillock in a more direct line. Back on the track it was a simple march back towards the car. By this point it had started chucking it down again of course

I did manage to see a tractor crossing a river... 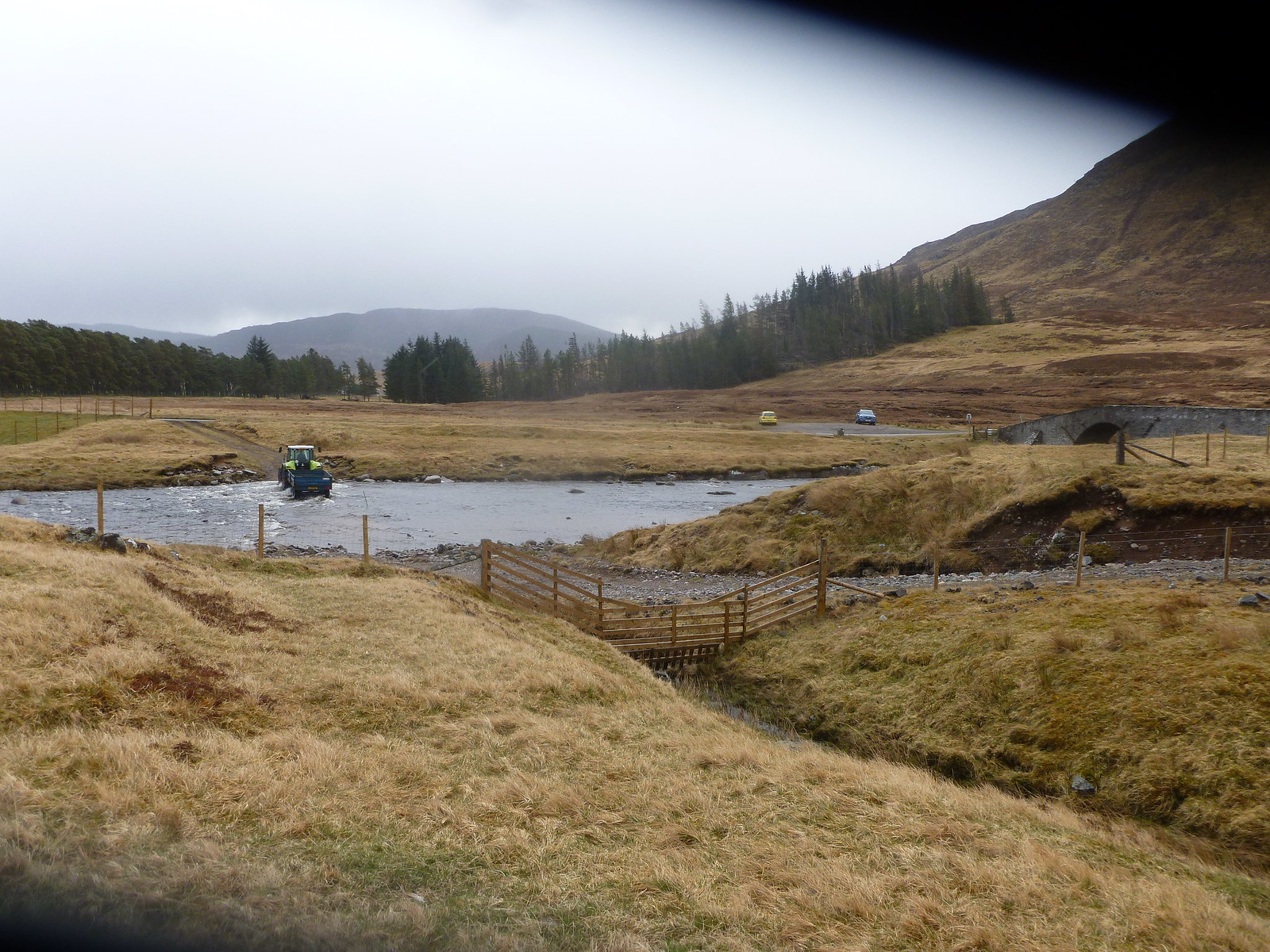 Blue skies over there! 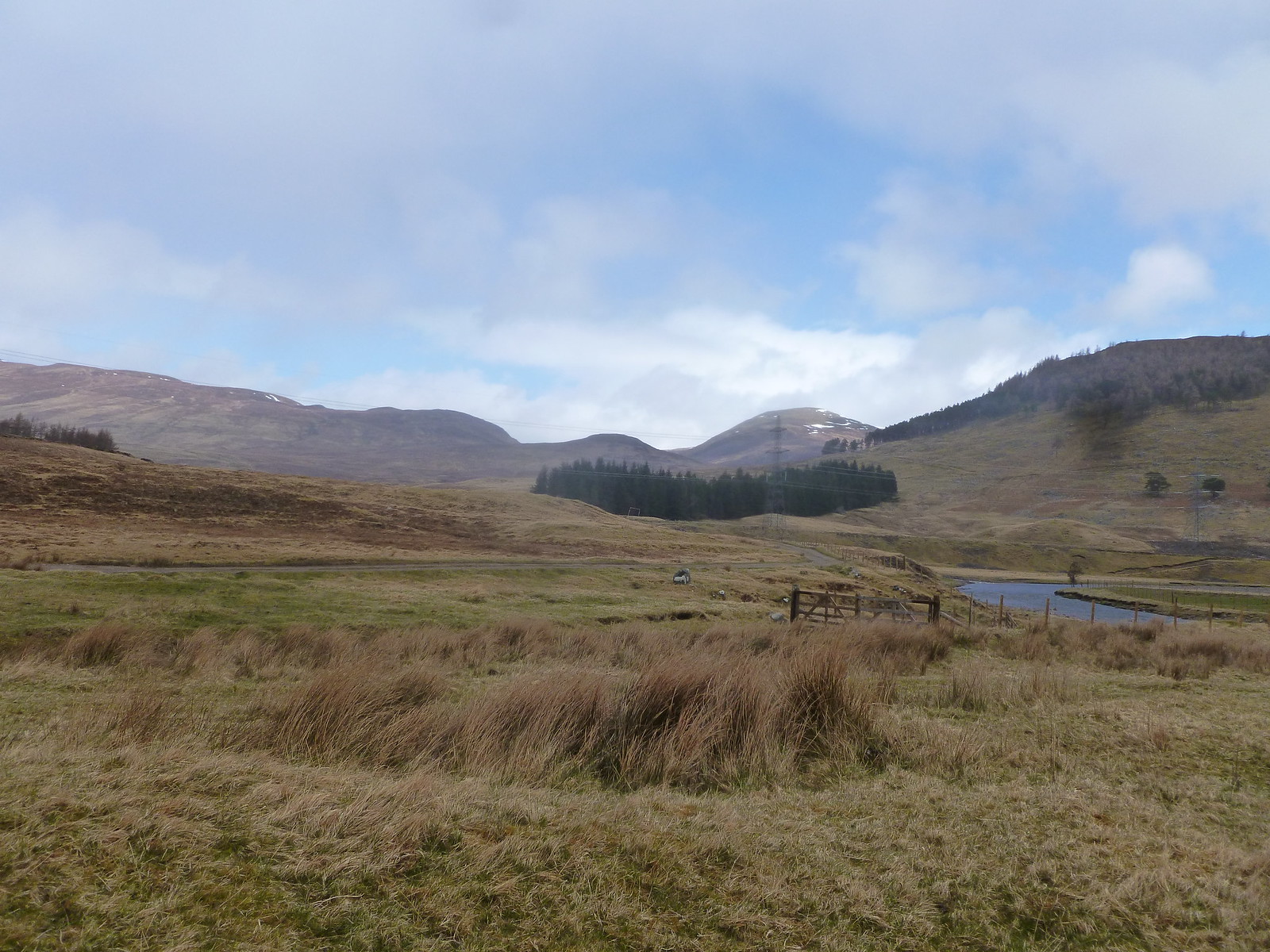 Back in the safety of my car I could breathe a sigh of relief. I was glad I had made the effort to get out; would have seen it as a wasted day otherwise! But glad I hadn’t attempted anything longer. I could feel the car being buffeted by the wind as I sat inside!

However, driving back along the track was a joy – the rain stopped and the sun came out, and it was beautiful. Geal Charn itself may not be the most interesting mountain but it is an excellent viewpoint, and a good excuse to come down a lovely glen.

Had to stop for this photo on the way out 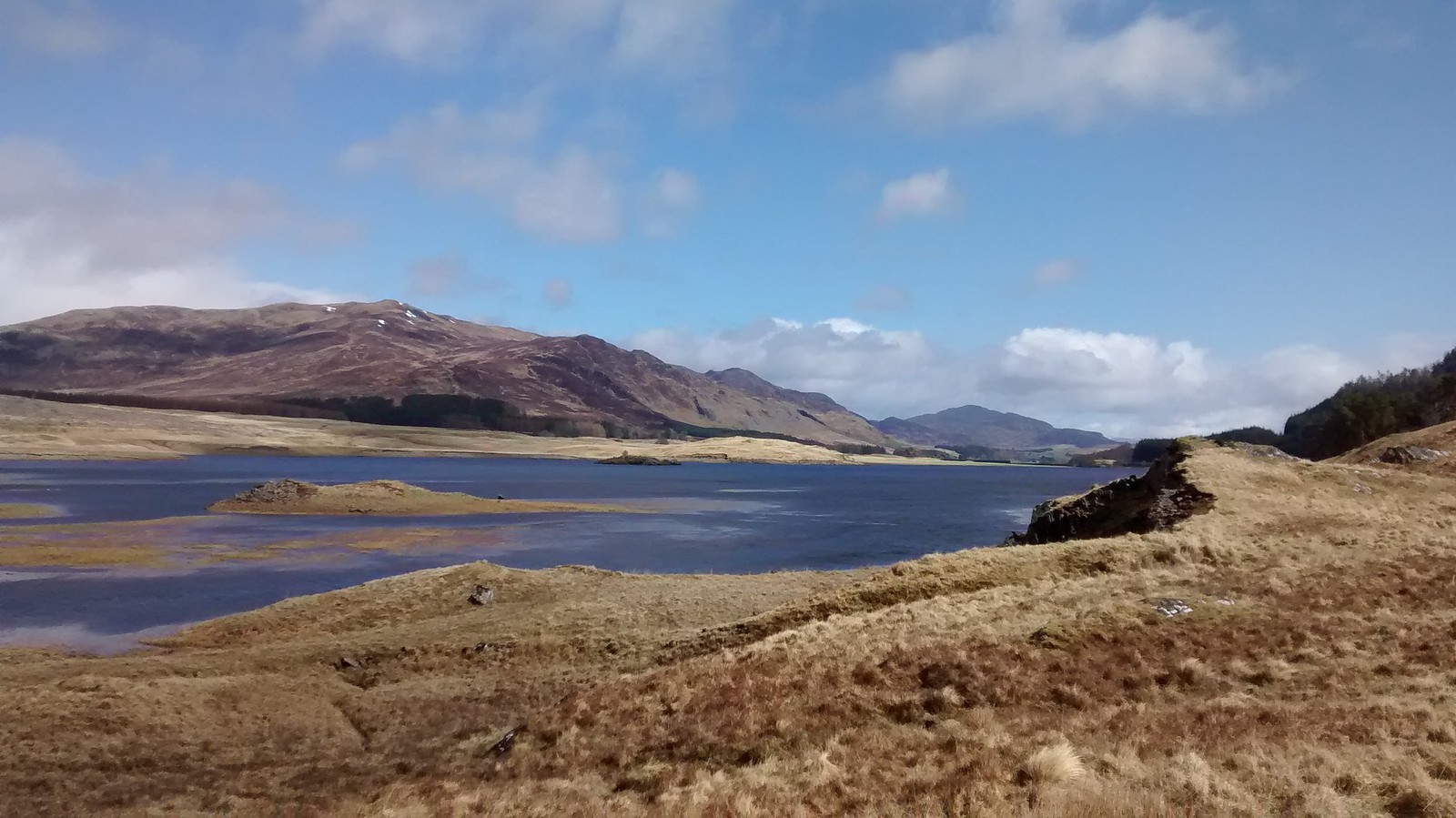 I set off back down the road munching on sausage sandwiches. As I got further south it got incredible warm so had to stop at Perth for a well-deserved ice-cream

It's strange to see virtually no snow in the photos. I did this one a few weeks ago and the snow line started just after the metal bridge

It's an under-rated wee hill, the walk in/out by the river is very pleasant, the ascent isn't too bad and the summit cairn is ridiculously massive. That last 700m stretch is a little annoying though

Well done, you're fairly crunching through them

jupe1407 wrote:It's strange to see virtually no snow in the photos. I did this one a few weeks ago and the snow line started just after the metal bridge

It's an under-rated wee hill, the walk in/out by the river is very pleasant, the ascent isn't too bad and the summit cairn is ridiculously massive. That last 700m stretch is a little annoying though

Well done, you're fairly crunching through them

Thanks, yeah it was an enjoyable wee rounded lump. Perfect for the amount of wind - nothing to get blown off

Jaxter wrote:Thanks, yeah it was an enjoyable wee rounded lump. Perfect for the amount of wind - nothing to get blown off

It definitely is. I'd read a fair few reports about this one suggesting a lengthy bogtrot. I was delighted to see a thick covering of snow from almost the get-go

Jaxter wrote:Thanks, yeah it was an enjoyable wee rounded lump. Perfect for the amount of wind - nothing to get blown off

It definitely is. I'd read a fair few reports about this one suggesting a lengthy bogtrot. I was delighted to see a thick covering of snow from almost the get-go

Next time I'll go in the snow....or take my wellies