Sometimes exploring a single Munros from a different direction can be rewarding and this route up the west ridge gave exceptional views all day and the descent through the Corrie was just awesome.
The time includes two half hour stops to brew up and lots of tiddling about taking photos. The weather forecast suggested it would be a very cold day on the summits with gusts of wind up to 40 mph and light snow showers through out the day.
We set out from the carpark at Inverleal at 9:30 and there were several other walkers just behind us as walked through the forestry to the point where the path turns of for Beinn Dearg. We wondered if we would lead anyone astray as we continued on the track past the ruins, but other walkers are wiser than us, sticking to their route rather than mindlessly following the people in front. Now on our own we can continue at a more seemly creeeper pace. The path soon divided again and we took the track of to the left, and then over a gate. Routes that gain height quickly always seem more motivating and this was no exception Cliffs of the Corries ahead An Teallach behind us.

The good track gradually became rutted mud, a rather indistinct path crossed it, and shortly after that we parted company with what was left of the track as it took a sharp turn left and downwards and we continued straight up the broad ridge. Underfoot was heather and peat hags, but the heather was short and the hags only moderately boggy and easy to negoiate. The soft snow lay from about 500m

The route seemed surpringly sheltered from the wind and the morning showers were no more than flurries. Broad ridge curved round invitingly between the 2 Corries. Summit ahead. We chose to ascend on the left as it was less steep with no real run outs. The wind was feeling decidedly chilly as we added layers. but a map reference check from the sat nav confirmed this was the lower top. 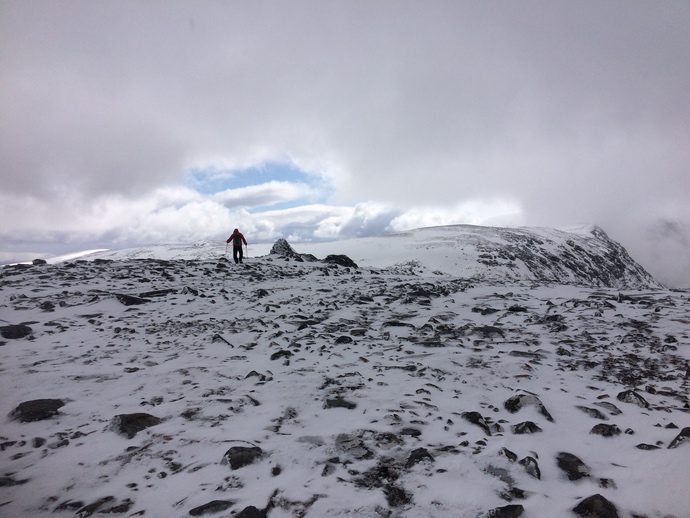 10 minute walk to the summit.

At this point the weather started to close in There was no one else around so we hunkered behind the cairn to make lunch when the storm blew in. The wind came up and the temperature seemed to take quite a dive and I could believe the forecast that said it would feel like -13. Drinking tea in the storm.

With everything packed away, we took a bearing and set to make a south easterly descent towards the Corrie. We met some walkers heading across from Meall Nan Ceapraichhean. Heading down from the summit the short storm was over. The storm soon abated when we're away from the summit but snow showers continued through the afternoon. We initially made our way round to the right of the Lochan and then realised the path and better route was on the left hand side so had to retrace our step. An Teallach in the distance. Upper Corrie Lochan an Chnapaich covered in snow. Descending the Gully between the two corries, trying avoid the stream

Then some scrabbling across boulders with some impressive drops, mostly hidden by the soft snow, between them. Round to the right of the Lochan an Chnapaich 
As there was still more than 8k walking back to the car we were glad to find a handy large boulder for a final brew. Not a route for Munro baggers where numbers matter, but a good alternative route and varied walking to go up this one summit, especially if you have already been up the main Beinn Dearg route.