Parked at the edge of the road at the end of a muddy track just north of the bridge at Kirkhope Cleuch. 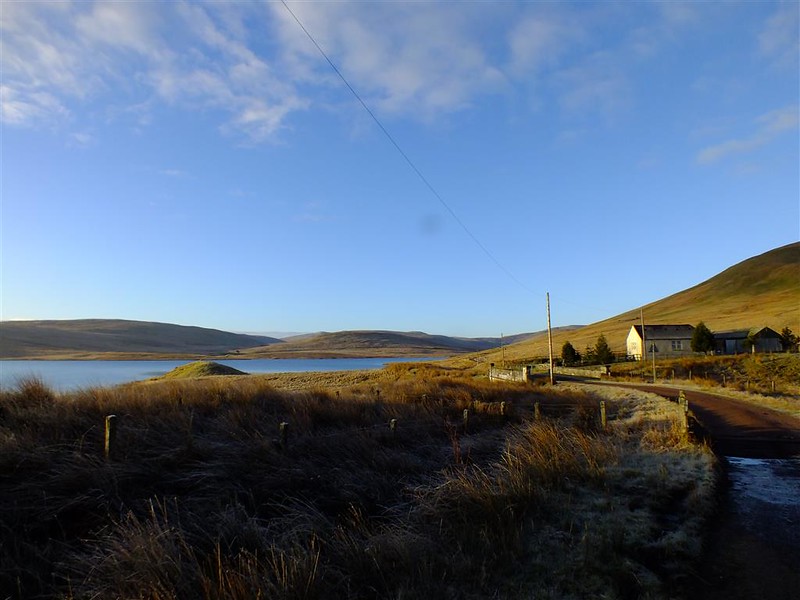 Had decided to go anti clockwise so set off up a faint track keeping the trees and dyke to the right until crossing the stream to get on to more open ground. A couple of stops to adjust the boots which were only on their second outing and to put on another layer as it was getting cold in the strengthening wind. The sun had risen further and was now behind some low cloud.

Up to Comb Law then south via Hirstane Rig taking a detour to head east to the New Donald, Rodger Law.

Queensberry still looking quite far away

Boxes of grouse grit dotted around

Over Gana Hill then downhill to skirt round Daer Hass following the fence. Round the other side could see and hear a farmer high up on Earncraig Hill shouting and whistling to his dog which was rounding up sheep lower down. Held back and waited for a while so as not to interrupt the proceedings - the dog moved most of the sheep off northwards. Followed the broken dyke and fence round until the start of the fence up Earncraig Hill - encountered a ewe and its lamb which then moved off northwards towards the other sheep in the distance.

Steeply up Earncraig Hill to the junction of fences then off down Berry Rig towards Capel Yetts.

Steep west side of Penbreck

After Capel Yetts, turned south to head up over Penbreck then SE towards Queensberry. Just after climbing out of another peat hag, got a bad pain in the front top of my right leg - from then on it just got worse making lifting my right leg each step very sore. Had been trying out using two walking poles to see if it would help an ongoing problem with my neck and right shoulder - the physio thought it might help as well. Suspect that using poles to help climb out of the peat hag had meant that I had overstretched my leg to the right and had pulled something.

A little light rain and some squally hailstones on the way up Queensberry - didn’t bother with waterproofs and it all blew over though could see rain showers on nearby hills.

Was finding the going hard due to the pain at the top of my right leg each time I lifted the leg to take a step - frequent stops helped a bit.

Wind farm to the north

Final section to the top through another peat hag

Then headed back the same way to Capel Yetts, up Berry Rig and over more peat hags before getting to the fence which leads north to Lamb Hill.

Right leg was still very painful each time I lifted it take a step forward. Tried angling my foot inwards but that didn’t make much difference - just had to stop frequently to rest it before carrying on and the poles didn’t really help given the ground was boggy and full of grass tufts.

Over Lamb Hill then skirted to the west of Over Law and down round a field of sheep to Crookburn to cross the Daer Water.

Looking back to the bridge

Hirpled along the road and back to the car. The right leg was extremely painful the rest of Sunday and could hardly walk on Monday morning - took some strong anti-inflammatories before heading off to work. Limped around during the morning and then it started it improve during the afternoon. By the time I was heading home after work, the leg was almost back to normal - have never experienced anything like it. Suspect I’ll be carrying a couple of anti-inflammatories with me in future and will go back to just carrying the poles or using one at the most.


Daer 17apr2016 activelog.gpx Open full screen  NB: Walkhighlands is not responsible for the accuracy of gpx files in users posts

I like the route. I did these hills last year using the WH route, which skips Rodger Law. Its a cracking walk. I really like your return over Lamb Hill, it looks such a natural choice on the map! Much better than slogging back on the farm track.

Glad to hear the legs better

Good effort with a sore leg RH - hopefully all is well now.

I've been aware of this route for a couple of years and keep meaning to do it but somehow I never get there - hopefully this year.

Looks like you got a good day for it.