Alex and I set off from Poldubh car park starting on the Ring of Steal path and continuing up the valley following the river, we got stuck in 2 minds at one point as there was 2 paths, the Garmin said go left but the path ahead looked well trodden and was following the river, so we chose to stay with it, the result was we ended up having to climb about 20 yards up a grassy bank to rejoin the path, but it was worth the effort, due to the amount of water on the hills the couple of water falls on the way up were well worth going to see.

We could see Stob Ban in glorious sun shine as we headed up the valley with plenty snow cover to add to the atmosphere, looking back down the valley towards Fort William was a stunning view. While looking up the hill we noticed a guy trying to climb the snow on the top of the hill, he seemed to be trying to get up the snow on to some of the cliff edges near the top, a quick check of the Garmins told us he wasn't on the path and we were still on the right route. We decided he must be a serious climber, he clearly knew what he was doing going of the track, no sooner had we started walking again we could see the him sliding back down the snow onto a grassy area, we saw him walk along a bit then lost him in one of the valleys, hopefully he was okay, we checked as we passed the area we saw him but no sign, maybe he had enough and headed back down.

We made decent time and were on the summit of Stob Ban in around 2 hours 15 minutes, we had reasonably clear views looking back towards Glencoe, but Ben Nevis was cloud covered. Although there was plenty snow on the tops we did manage without crampons, however there was fresh snow falling on top of the ice that made it reasonable walking for us but crampons may still be needed with the fresh snow and the low temperatures.

As we walked to the bottom of the final bit of climbing on to Mullach nan Coirean we got to see an Eagle getting harried off by a Raven, pity it never gave us time to get the cameras out, it was only a matter of 20 feet or so from us. We never got to see the view from the summit, a snow shower was the order of the day, so it was a quick photo then straight off to head back down to the car. View back down the valley looking towards Fort William 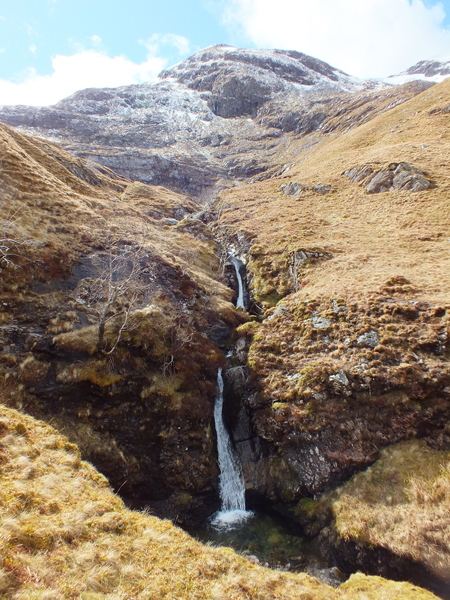 The deviation from the normal path allowed us to see this waterfall close up, well worth it

Kenny, good to see your still out, looks like a few decent views on the walk.