Last week I had to travel from West Lothian to Perth and back again for a one minute meeting to collect and deliver parcels; a long drive for little result. How could I make it more worthwhile? The forecast was reasonable for that morning and the answer obvious. I decided to start early and visit a few Marilyns en route. On the evening of the 26th I read several sets of Walkhighland reports and then downloaded and printed out appropriate 1:25,000 map sections. Noting that parking could be a problem for some of them, I also studied Google Streetview images which helped, but also misled - of which more later.

A prompt start saw me arriving at the start of the track up Mount Hill by 10am. I had planned to park on the verge, but saw one car already parked inside the field with room beside it for another. The gate was well enmeshed in vegetation so was obviously not going to be closed any time soon. I abandoned the verge idea (it also had a ditch!), and snuggled up beside the early bird’s car. 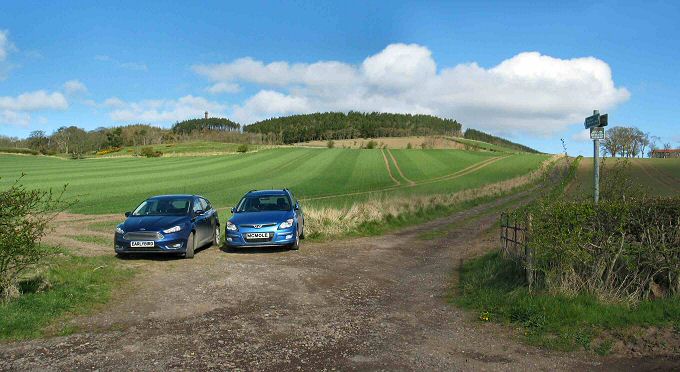 The Rodmiester reported that it took him 35 minutes and I did it easily in 46. The route is well signed and a possible addition since his 2013 walk is a deer fence surrounding the summit area. Just keep following the track to find the only gate into the enclosure. 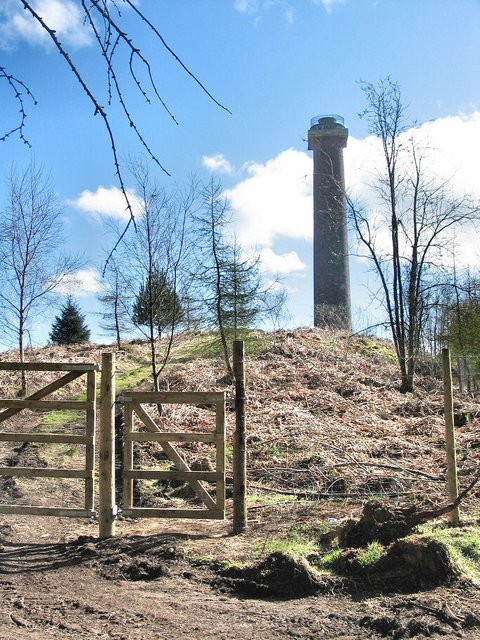 A conifer not far inside bore a few Xmas baubles and the monument door some hefty padlocks. 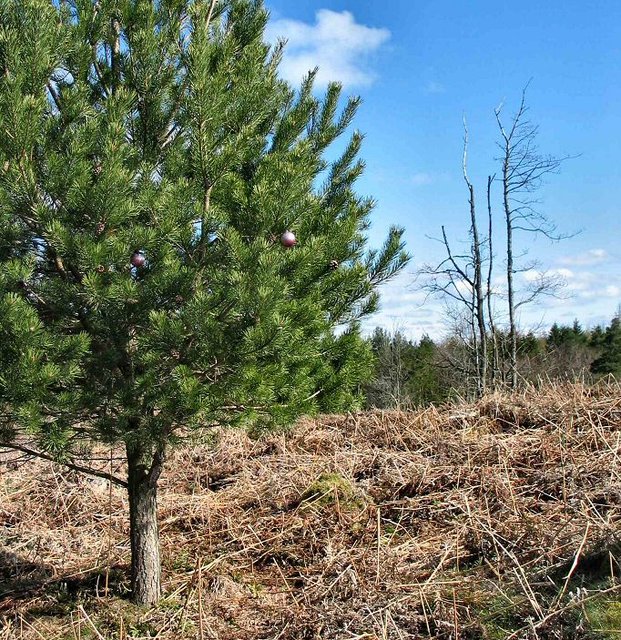 I wondered what the view from the top was like. Searching on-line I found that it did take part in a Doors Open day (7th September 2014) with visitors restricted to six at a time. I must check again in September to see if there will be another opportunity this year. 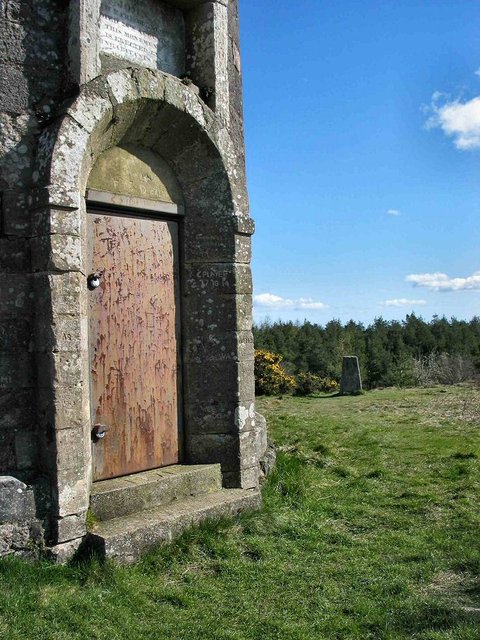 The fence also encloses the trig point and an old quarry that, perhaps, supplied some of the material for the 95 foot high tower. It was a fine sunny morning with a cool enough breeze to justify a light jacket, and I didn’t need anything more that day. I didn’t bother taking waterproofs, just my camera, map and Garmin GPSmap64s to record the route and times. I had expected to meet the earlier walker, but there are at least another two routes back down and the other car had gone by the time I returned to mine.

Next on my list just before 11am and after a short drive was Norman’s Law. Though almost all reports start from Luthrie, robertphillips had begun his walk from the north at about NN 310210. Streetview did show a muddy patch next to the road that looked to be plausible parking, so I was very pleasantly surprised to find that the Fife Coastal Path now ran up the track that starts there and had provided a layby large enough for several cars. I followed the track to a junction where the coastal path turned right into a ‘For Sale’ wood, while I turned left and lost a few metres to pass some sheep pens and through a pedestrian gate below some of Norman’s Law’s crags. Turn left and take the track or an ascending sheep path to reach the main walker’s route to the top or turn right and climb up grassy slopes to join the same path higher up. Here I met several groups of walkers - about a dozen in all - enjoying the sunshine and commenting how the weather was so much better than the forecast. The viewpoint indicator plate erected in memory of a Duncan Wilson names three dozen distant mountains and mountain groups and their distances. The furthest is Ben Lomond at 95km. This presented two puzzles: who was David Wilson and why does one sector of the indicator look as though something has been erased? The most likely prominence that could have been named in that due west sector is Moncreiffe Hill.

To the southeast the higher Lomond Hills were still snow capped. Looking back from near the car at a group on the summit. Noon approached as I found The Rodmiester’s recommended parking spot for Cairnie Hill. It might just be long enough for two vehicles to park without obstructing the gate into the telecom site just out of picture on the left, but I had it to myself. I followed The Rodmiester’s route and can confirm that I found the deepest mud of the day at the gate after the route’s initial zig-zag. That field also led uphill to a fence with a taut barbed wire top strand that needed caution to cross. On the way back I avoided both mud and fence by descending close to the trees, but brambles and low branches added ‘interest’, and when summer growth takes off and nettles supplement the mix, that muddy gate and fence might look the better route. Part of the field above the fence was freshly ploughed, and beyond it a short ascent then a left turn through gorse found the summit stone. 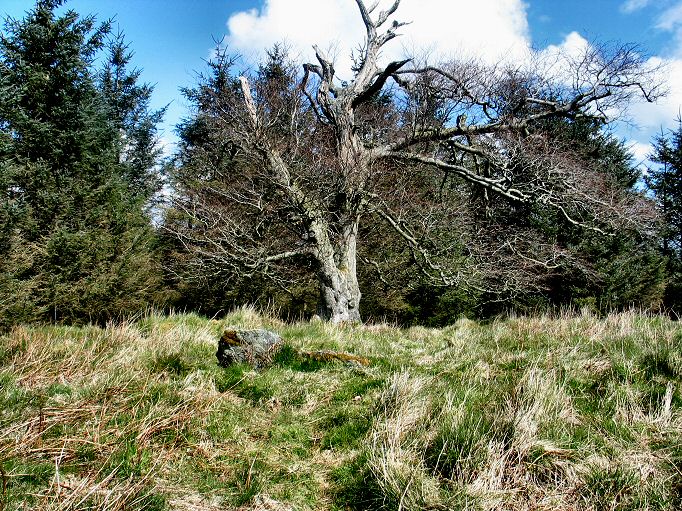 By now the snowcaps on the Lomonds were disappearing fast. The longer drive to Perth meant that it was almost half past one before I reached the Woodland Trust’s Tay Car Park off Rhynd Road north of Moncreiffe Hill. This was again too recent to show on Google Streetview and isn’t on the 1:25,000 map either. I only found that it existed by reading reports on this site. The Woodland Trust website includes a leaflet on the hill including a useful map of all its paths. As I arrived I received a text telling me my parcel exchange would be later than planned so I took the opportunity to walk around both hill forts finding many of the sculptures that are dotted around in the woods. When I started the car park was emptying and I only met a few folk enjoying the diminishing sunny patches. On my way back a few flakes of snow drifted down followed by a short lived smattering of hail before I arrived, still dry, to find only one other car still in the car park.

I made my appointment for swapping of parcels with time to spare, and afterwards called in at another Walkhighlands contributor's house for coffee and cake. Refreshed and reinvigorated the sun was still shining as I left at 4:45, so I asked myself if I should continue to enjoy the day, answered my own question with a resounding “Yes!” and headed west instead of south to arrive at…

There is plenty of parking space at the start of the forestry track to the west of Lendrick Hill. Navigation is easy and made easier because a cairn has appeared to complement the post at the point where you leave the track and climb up through a gap in the forest. It is steep and I can see the mossier section could, as reported by others, be treacherous in the wet – there were plenty of skid marks as evidence! For me it was dry, but still required some care on the descent. Despite the showers of rain, snow and hail that I could see all around, Lendrick was untouched and stayed that way while I was there.
The Lomond Hills again from a different angle. From the summit the part-built Queensferry Crossing was clearly visible. On my way down and heading for the gap in the forest I had to include one photograph of Glen Devon’s newest inhabitants – a flock of wind turbines. The black cloud in that image was promising a downpour but I was in my car and away in the dry. I’m not sure about the dog walker who was on her way up as I descended. Driving downhill pursued by a freewheeling cyclist at speeds approaching 50mph, I did briefly regret not preparing a map for yet another Marilyn. But then the hail started, and with wipers working hard and headlamps on, I considered myself fortunate to have managed to visit five great wee hills for the first time in good weather in one day without getting soaked!

You have to applaud the eccentricity of this one. I'd no idea there were so many Marilyns in there, barring the Lomonds. I've worked out I've even done one, Lendrick, along with Innerdouny some time last century.

Looks worth sweeping up some more on a bike ride from Perth to Ladybank.

That looks a really worthwhile day you had there McMole, come on admit it you must have taken a tumble off Lendrick hill, lol

The Rodmiester wrote: come on admit it you must have taken a tumble off Lendrick hill, lol

Or, forewarned, perhaps I went prepared with crampons!

Many thanks for posting - always useful to get updates on parking spaces - and deer fences!

Was going to say I am surprised I didn't bump into you, then saw I had gone out on the Saturday to do all the Fife Marilyns ,while you did your selection on Weds. I also had a bonus of meeting a penguin

Sgurr wrote:Was going to say I am surprised I didn't bump into you, then saw I had gone out on the Saturday to do all the Fife Marilyns ,while you did your selection on Weds. I also had a bonus of meeting a penguin

I am most impressed with your Fife Round Sgurr, especially since you met so much snow on the first three. I only saw a few flakes sheltering from the sun under shrubs and trees on Wednesday.