Grahams included on this walk: Craignaw


Off to Galloway again - this time bound for Glen Trool - an area I hadn't visited since 2007!

Stroan Bridge, just past Glentrool village has been narrowed, so I wouldn't fancy driving a wide vehicle across.

No goats at the car park as I set out downhill to Buchan. Another less than helpful notice from the Forestry Commission, advising of tree felling until the end of May 2016, but no indication of where this was happening. I found no evidence on this walk of any felling work being carried out.

I took this footpath from Buchan, signposted Loch Valley. An easy path to follow, although a bit muddy in places. As I made my way uphill, I heard my first cuckoo of the year - I think it was in the woods to the south of Loch Trool. View back to Loch Trool from the Loch Valley path Quite mixed weather during this stage of the walk, from sunshine to soft hail. However, it was all very pleasant and it wasn't too long until I arrived at Loch Valley. 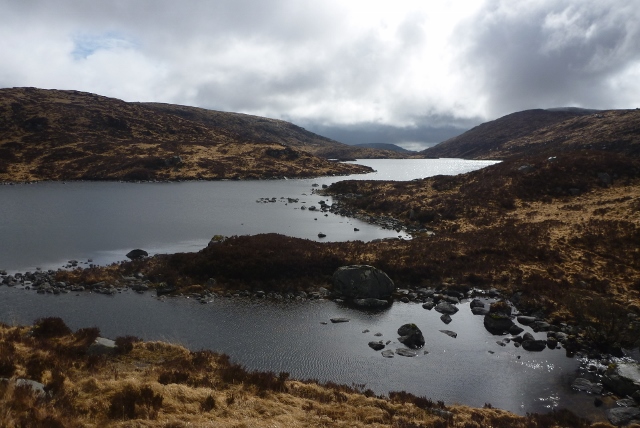 The path continued, pretty much as shown on the map, up to Loch Neldricken. Although I would like to have looked for S R Crockett's "murder hole" it looked as though the shorter walk would be along the south shore towards Black Gairy. Although you have to cross the outflow of the loch, there are a number of large granite boulders that allow you over with dry feet. A path (of sorts) continues past a few gravel beaches.I pressed on past the loch towards the Craignaw/Dungeon Hill col - basically heading towards The Wolf Slock. Stopped for a snack about halfway up. 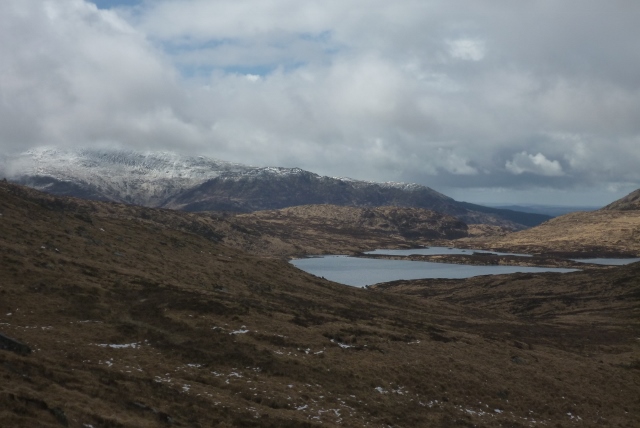 Looking back to Loch Neldricken from my tea break stop

Again, the weather was quite mixed, but the going underfoot was fine. 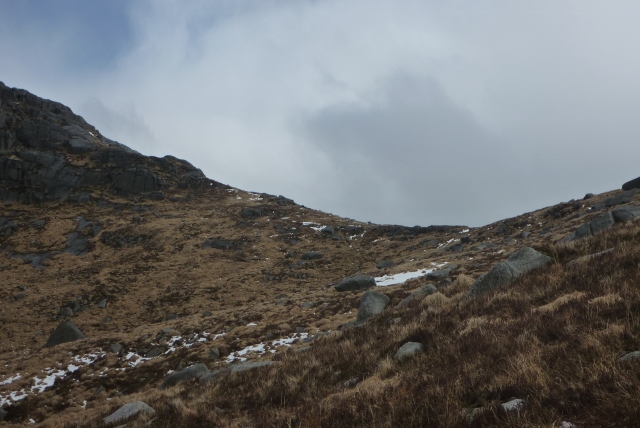 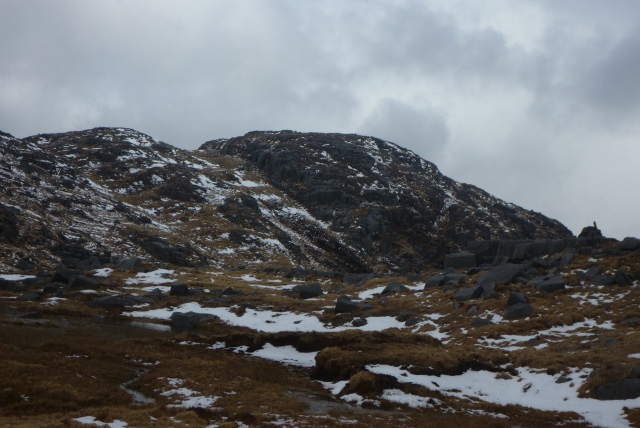 Dungeon Hill from the col

The walk from here to Dungeon Hill took a bit longer than expected - quite wet ground and still a bit of soft snow lying from the past couple of days. Didn't linger too long at the cairn as the weather was closing in again, but it cleared on my way back to the col. 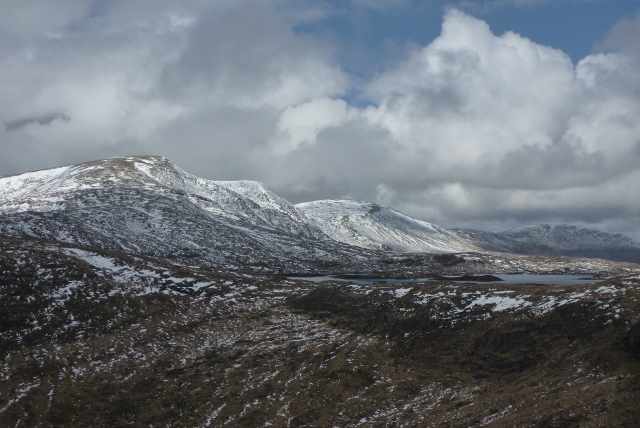 Loch Enoch and the Awful Hand

Things were a bit clearer at the top of Craignaw - there had been a short, steep section to negotiate on the way up, but also lots of granite slabs that made the walking easier. 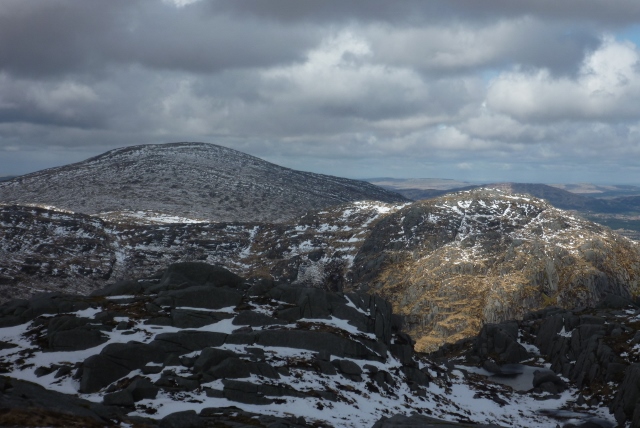 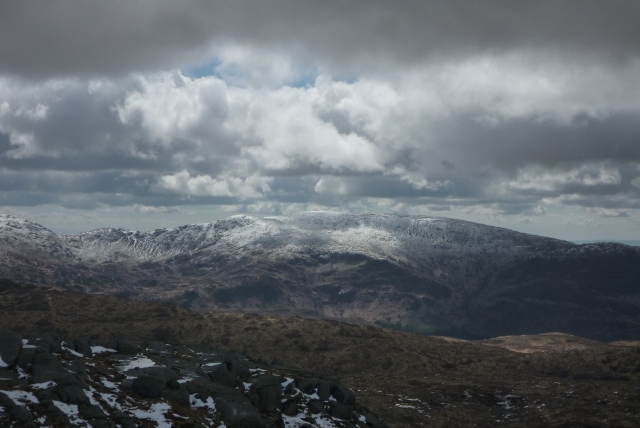 The Rhinns of Kells from Craignaw

The start of the walk to Craiglee was made easier by the granite pavements and the weather was now improving. Just above Loch Narroch I saw a large herd of deer. 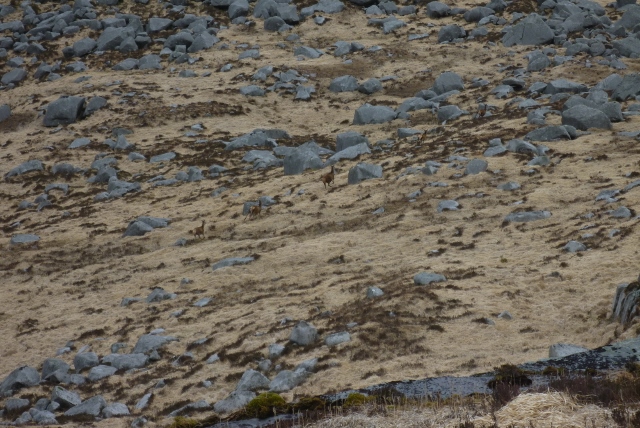 Some of the deer near Loch Narroch 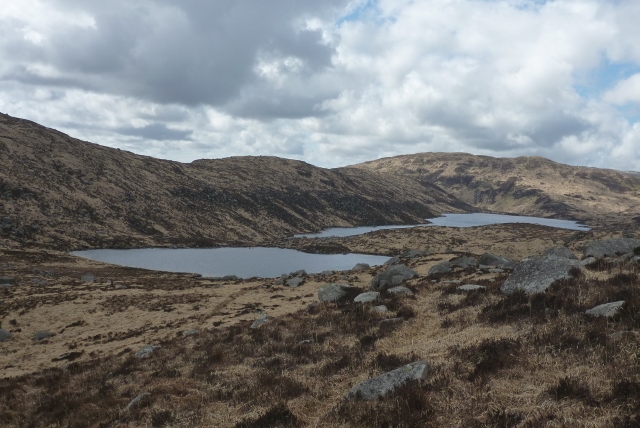 Lochs Narroch and Valley from the col

The drag up to the Rig of the Jarkness was easier then it looked on approach, although once on the ridge, it seemed to take an eternity to get to the summit of Craiglee - lots of undulations. 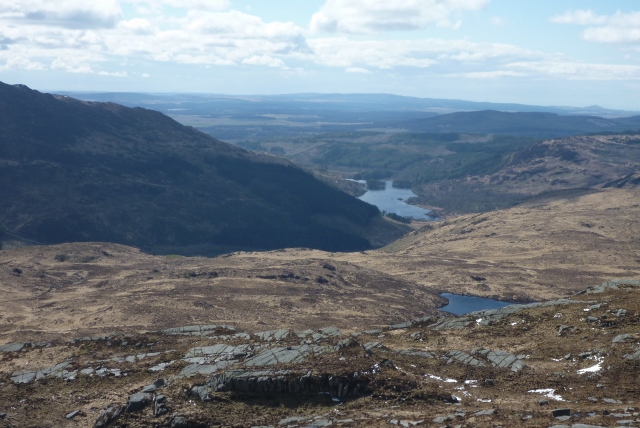 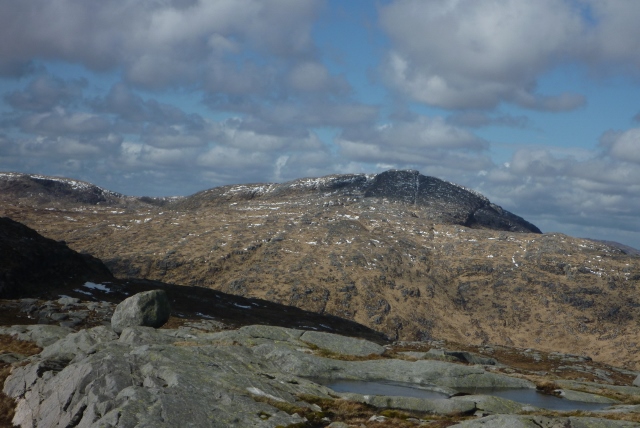 Rather than descent the ridge, I opted to head to the section of the Southern Upland Way to the south west of the summit. Although this looked longer, I reckoned that once on the path, it would be easy going. In hindsight, this was a mistake, as the ground leading to the path was heavy going and this section of the Way is almost non-existent! I was glad to reach the track at Glenhead. From there, it was a short walk back to the car - although the final section is uphill!

An enjoyable and rewarding day, although hard going in places. I was amazed (and delighted) that on a Bank Holiday Saturday, I was able to walk all day without meeting another person!