We had expected Sunday to be the less good day this weekend so were looking forward to a day of endless rain; however a consultation with weather forecasts the night before saw that things were looking up, depending on the area.

We settled for Gleouraich and Spidean Mialach as we figured we could fit them into the weather window. This meant a slightly later start, so a lie was enjoyed, as was a stop for Second Breakfast of bacon/bacon&haggis roll and tea in Fort Augustus. Cake was also purchased for later

Eventually we arrived at the parking area on the shores of Loch Quoich shortly after 11.

Opting for the drier approach, I got my waterproofs on and sorted my pack in the car before facing the weather. It was truly horrible, but we manned up and set off along the road back towards the start point of the route where there was a helpful wee cairn to guide us to the path through the rhododendrons

Soon out of the bushes, the path was decent although fairly wet. We could see the sky starting to brighten and 5 minutes later, the rain had stopped and there was a lovely view down the loch 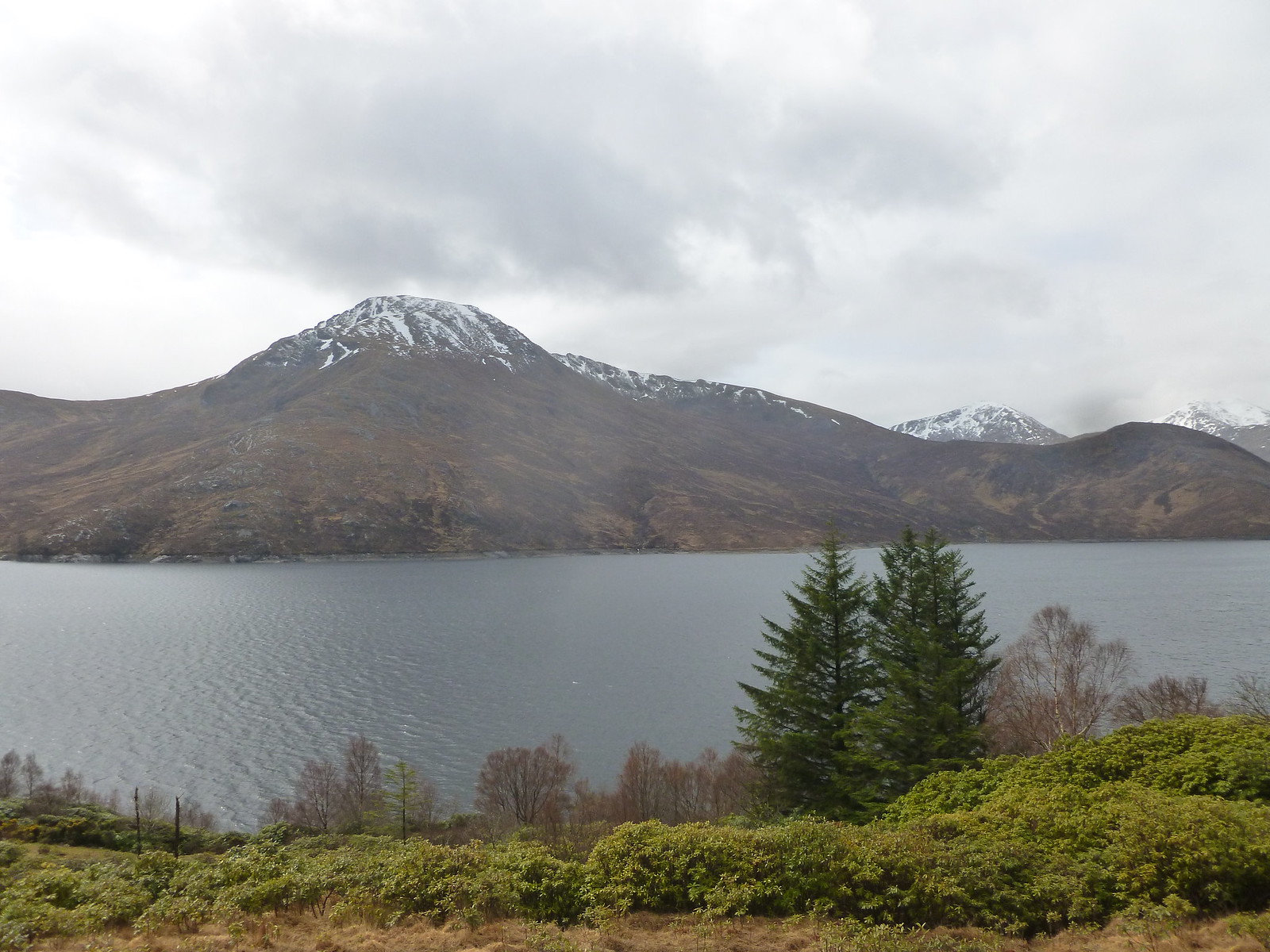 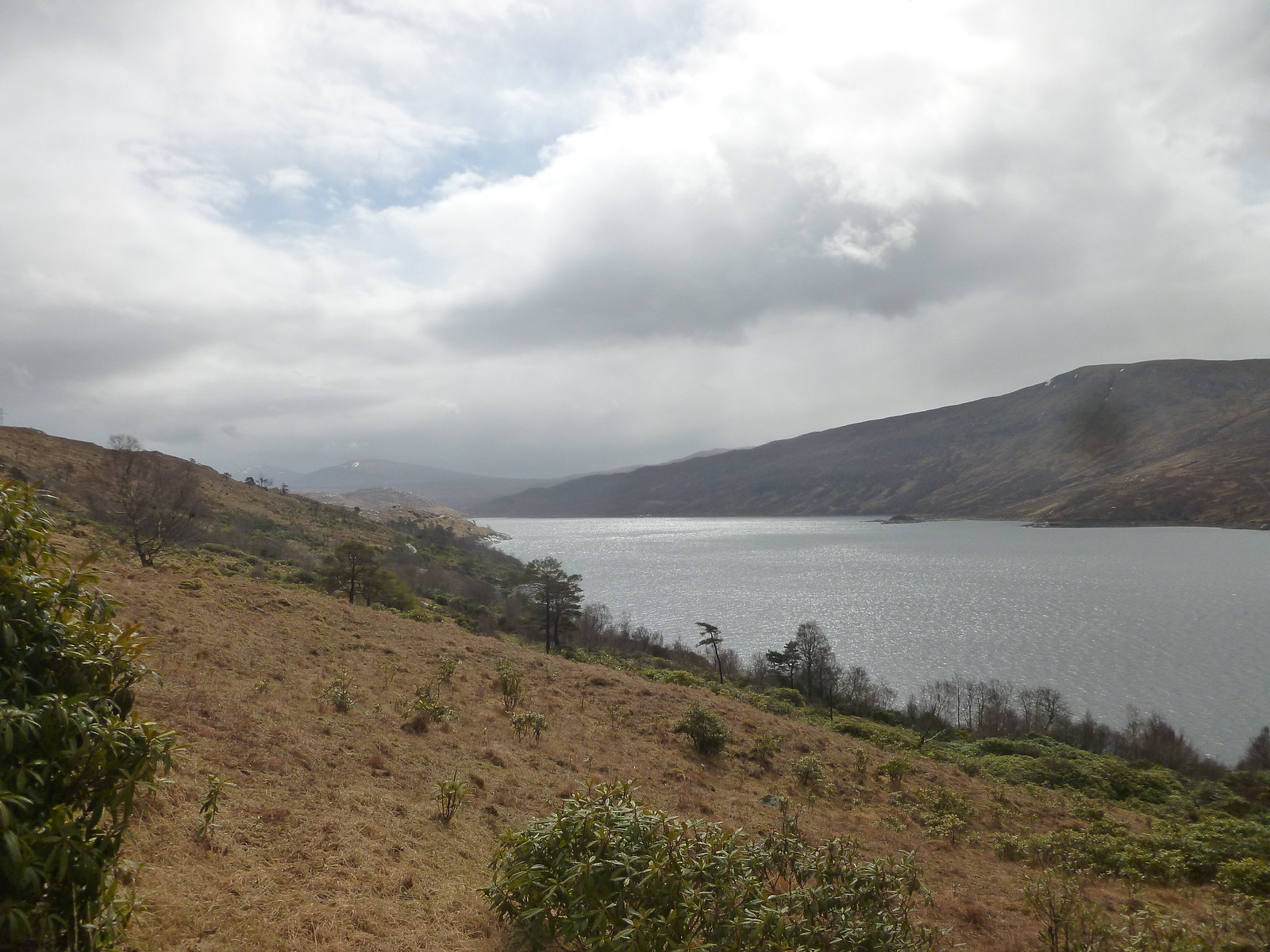 Hopeful that the weather forecast had been right after all, we continued along the path enjoying the views 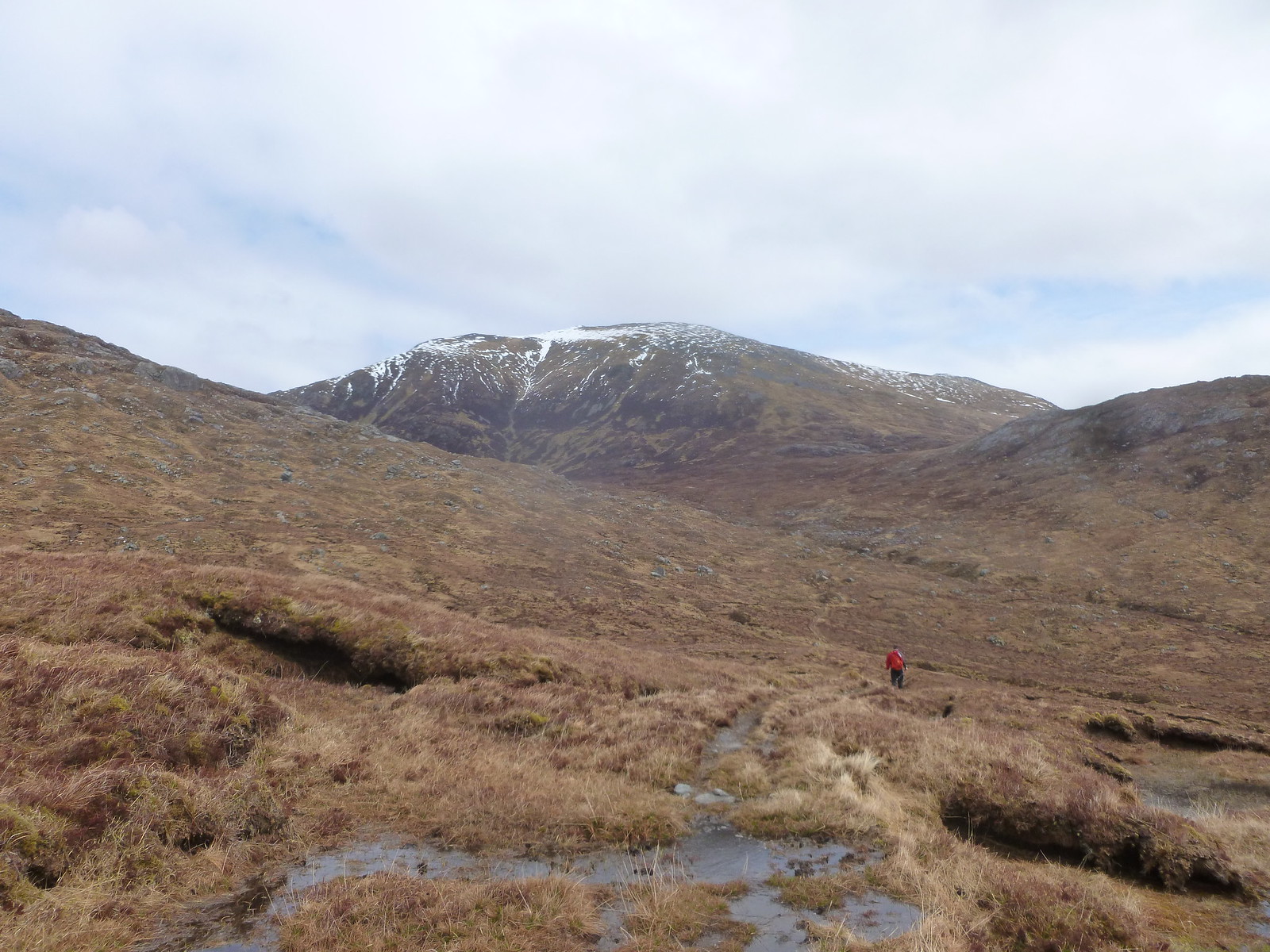 Looking back towards Sgurr na Ciche at the head of the loch, a possible target for tomorrow 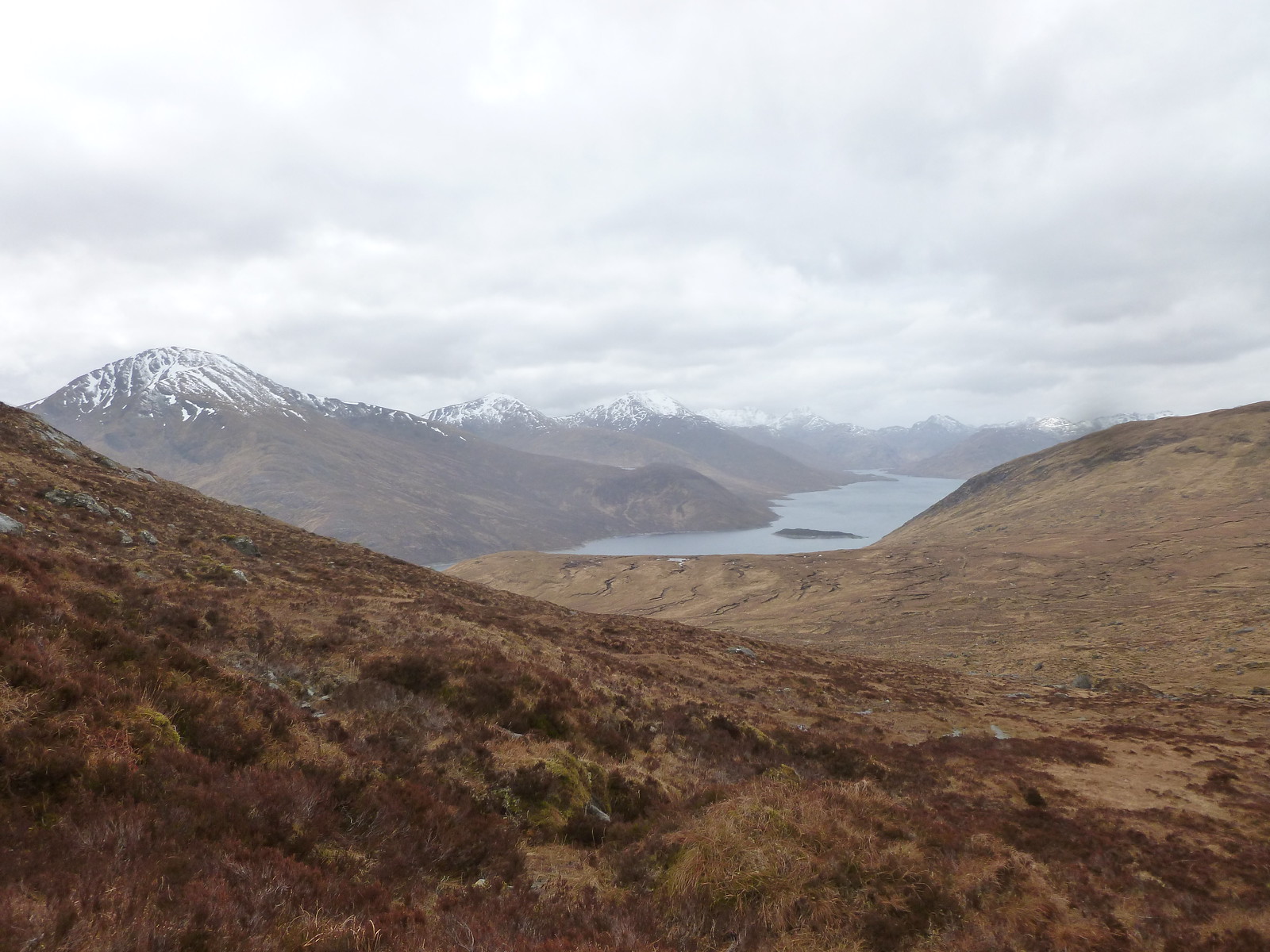 There were some boggy moments but generally the feet were kept dry as we made our way across and up the hillside. We could see ahead of us the steep grassy slope up to the ridge and it looked fairly brutal, although the ridge itself looked fantastic. 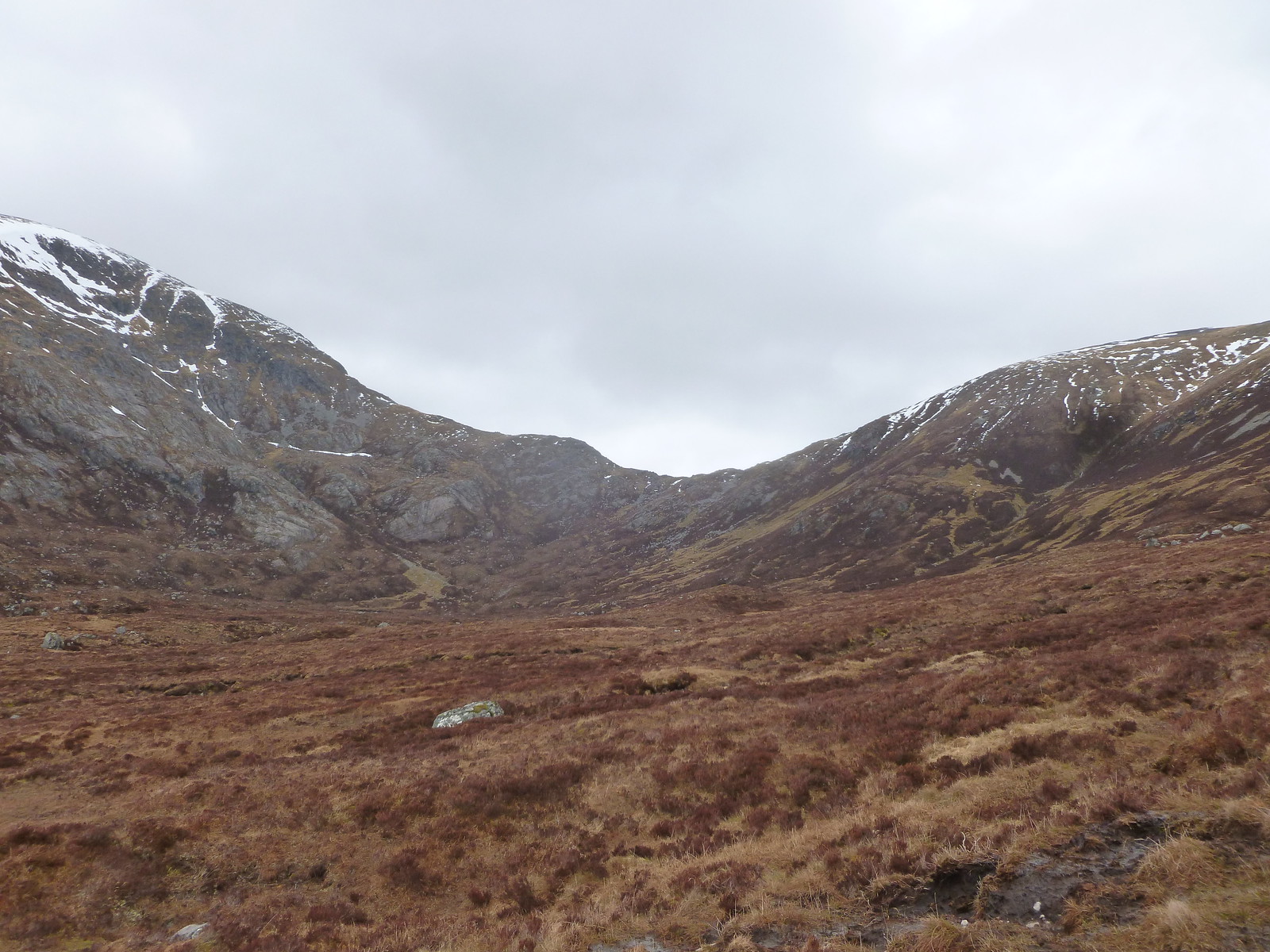 Thinking that everything was going well, we kept going until coming to a river. In drier conditions I'm sure a hobbit could have jumped across but there was no way I was going to make it. I decided to utilise my bin bags and kept my feet blissfully dry 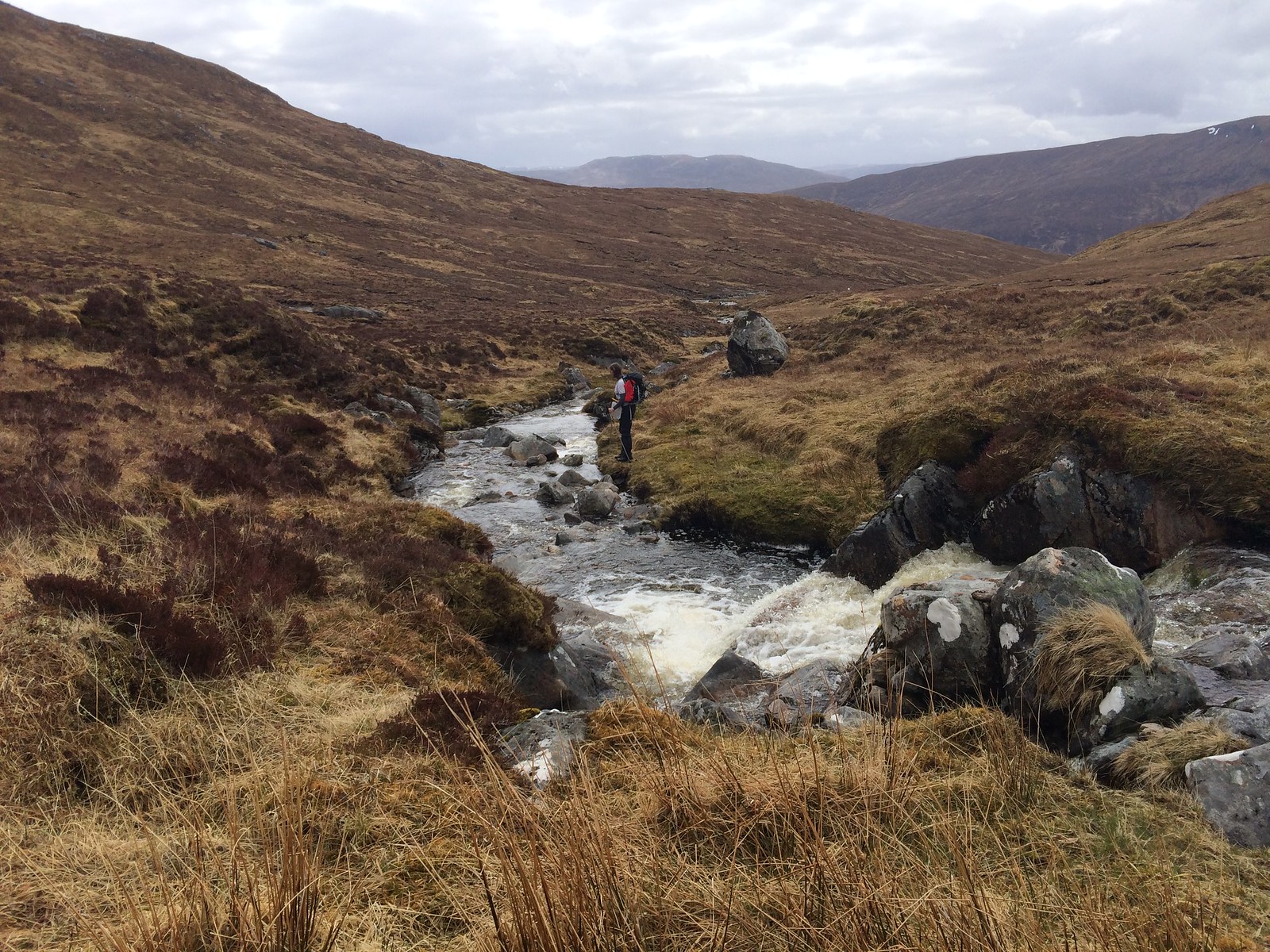 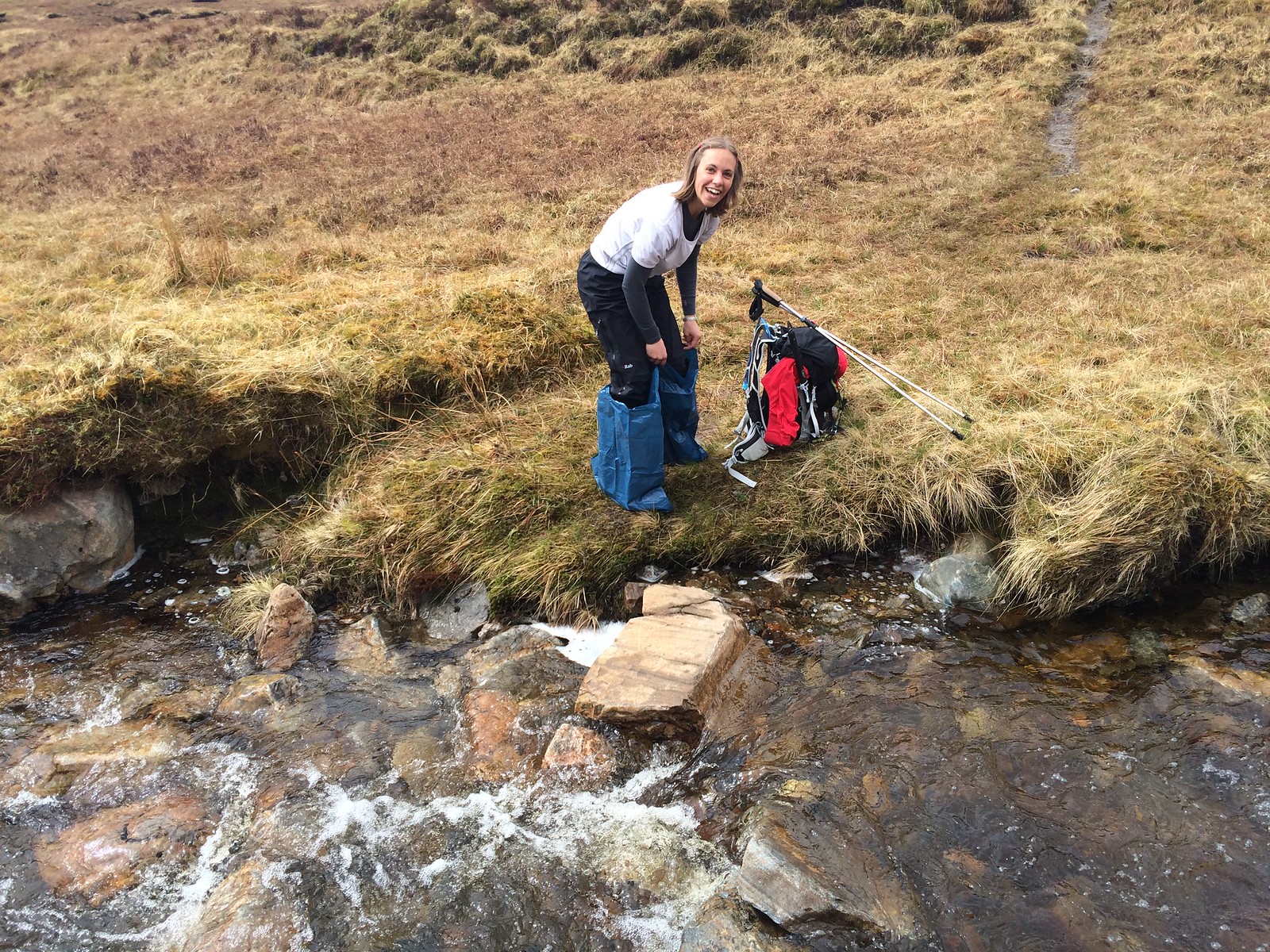 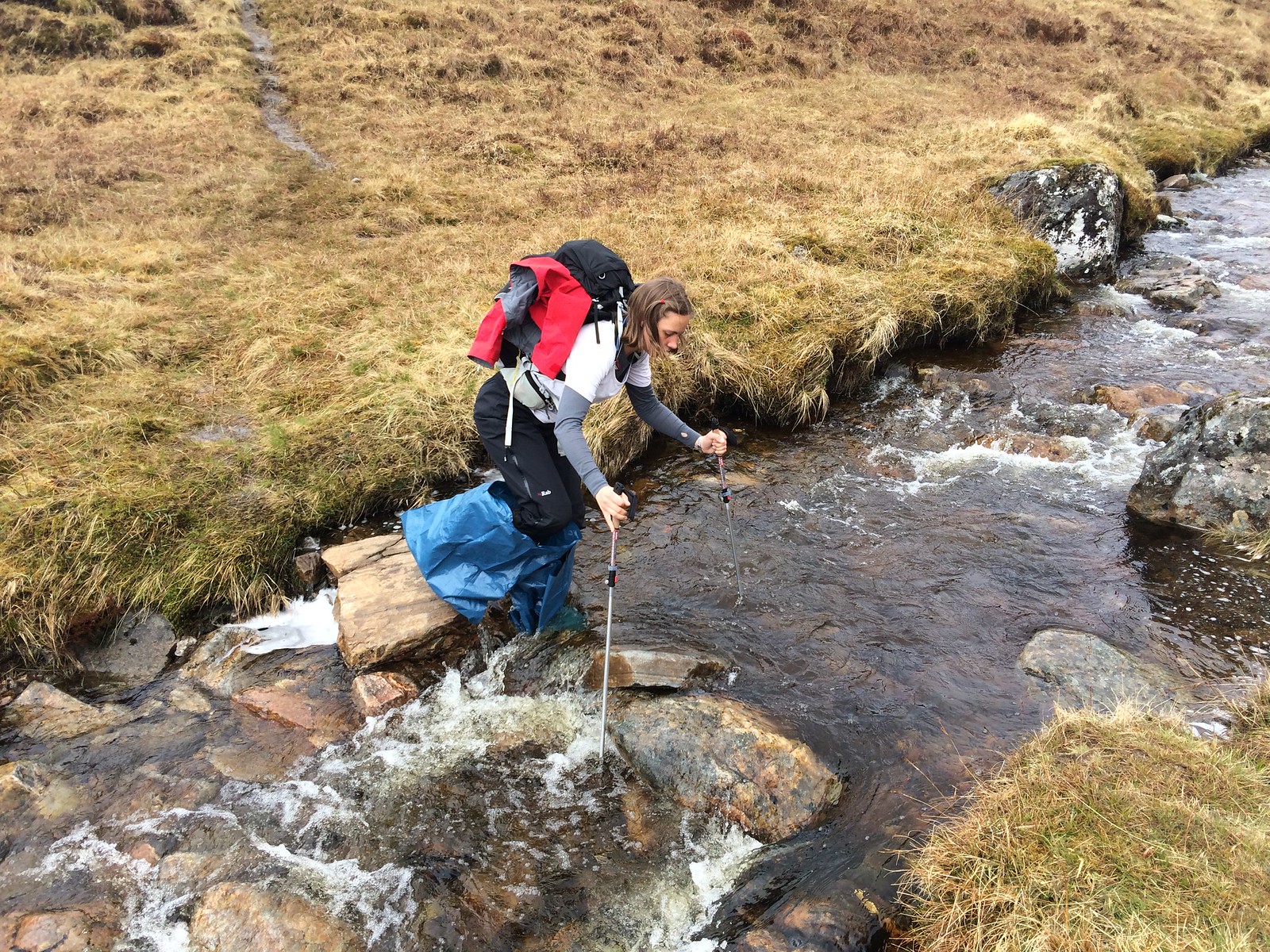 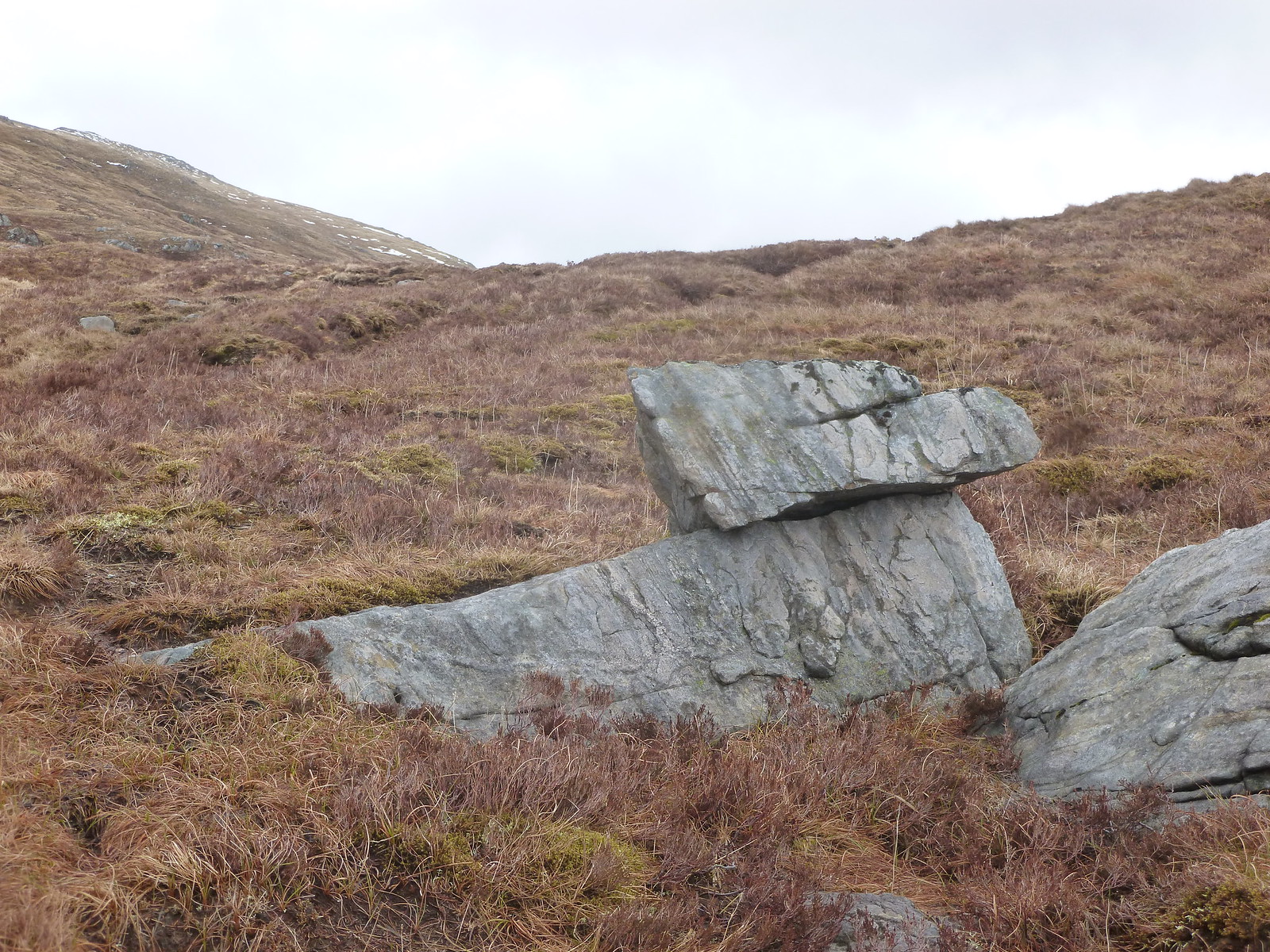 Looking ahead we tried to work out the best route up the steep bit. It looked like case of just going for it, so we did. 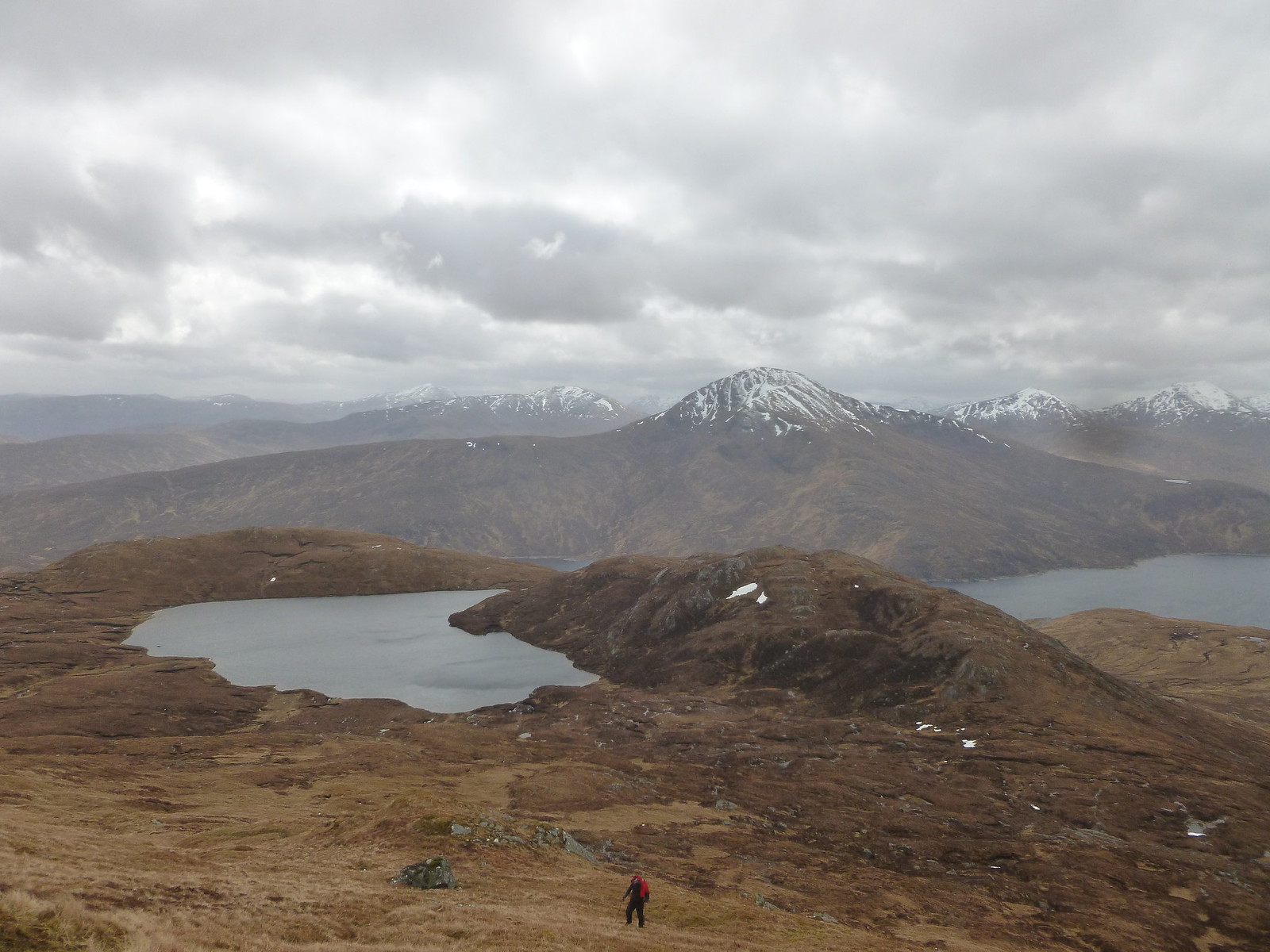 As we climbed, we could see the summit of Gleouraich begin to appear, and what an attractive summit it was too!! There's something about snow on ridges to make them look totally spectacular

Crossing fingers for the weather staying good, we kept on going and eventually could see the summit of Spidean Mialach appear along the ridge to the right. Crossing through snow to cut off a corner, I reached the ridge and was treated to a stunning view of the South Glen Shiel ridge and beyond, and also a gigantic cornice... 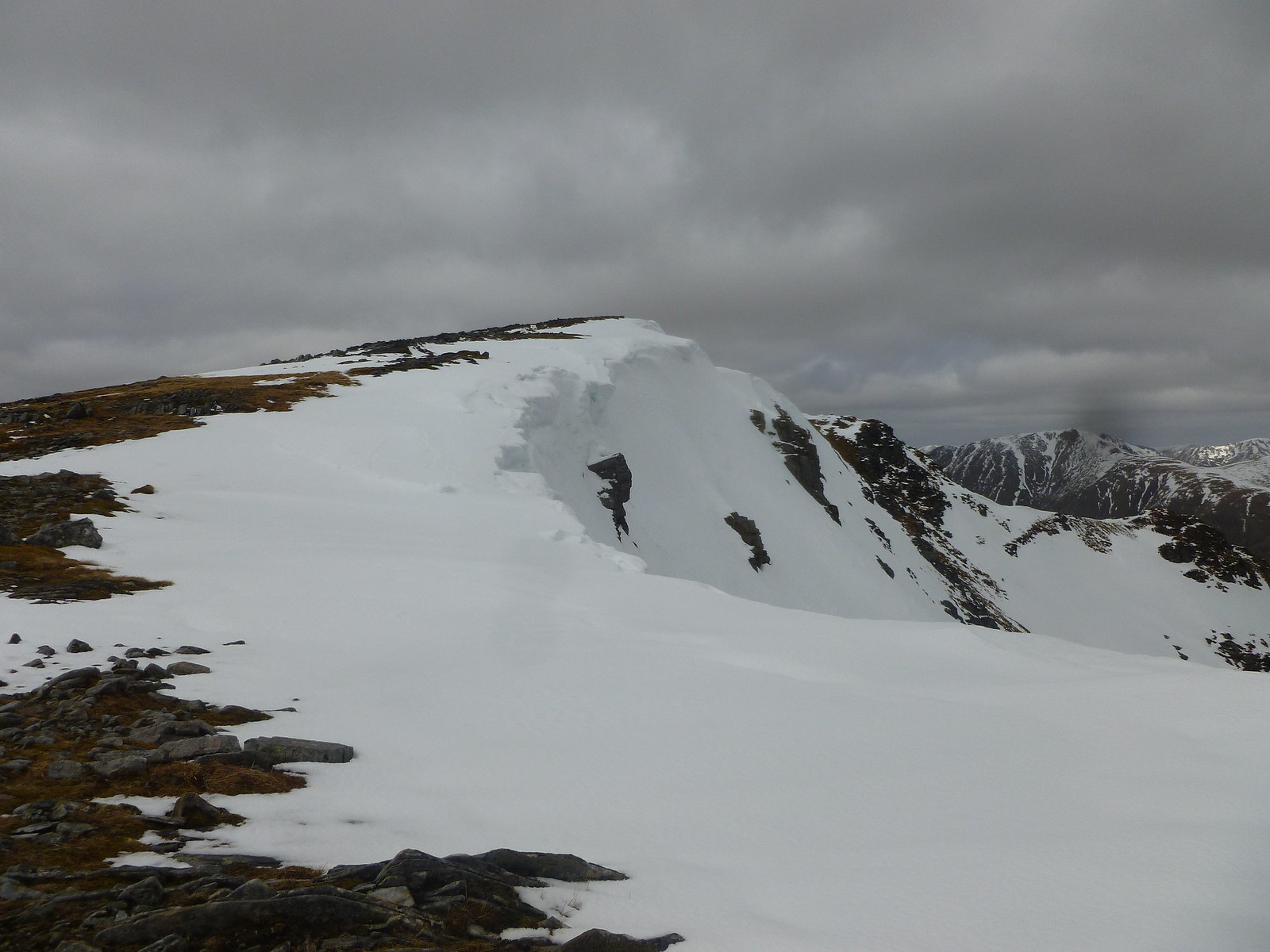 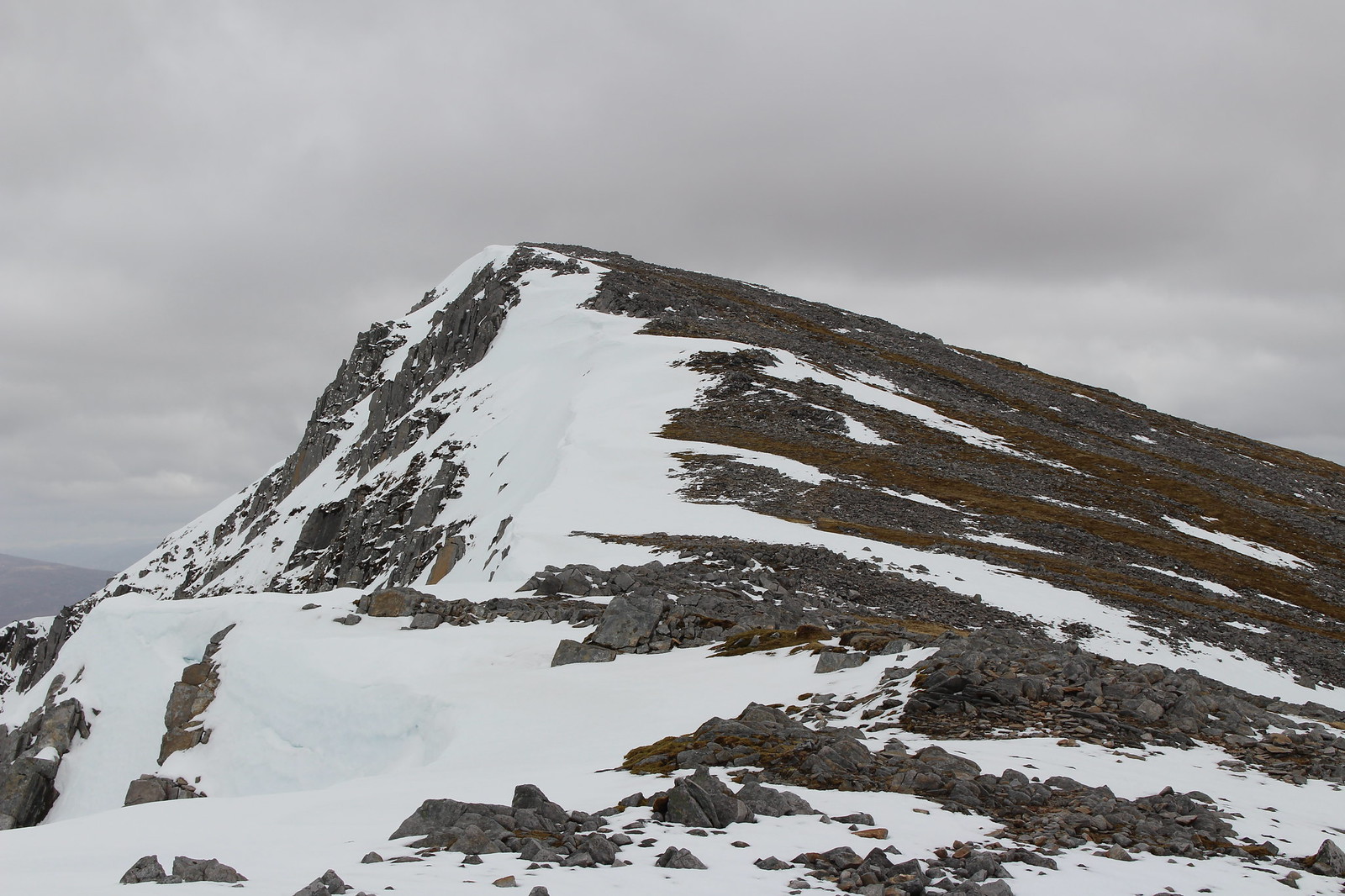 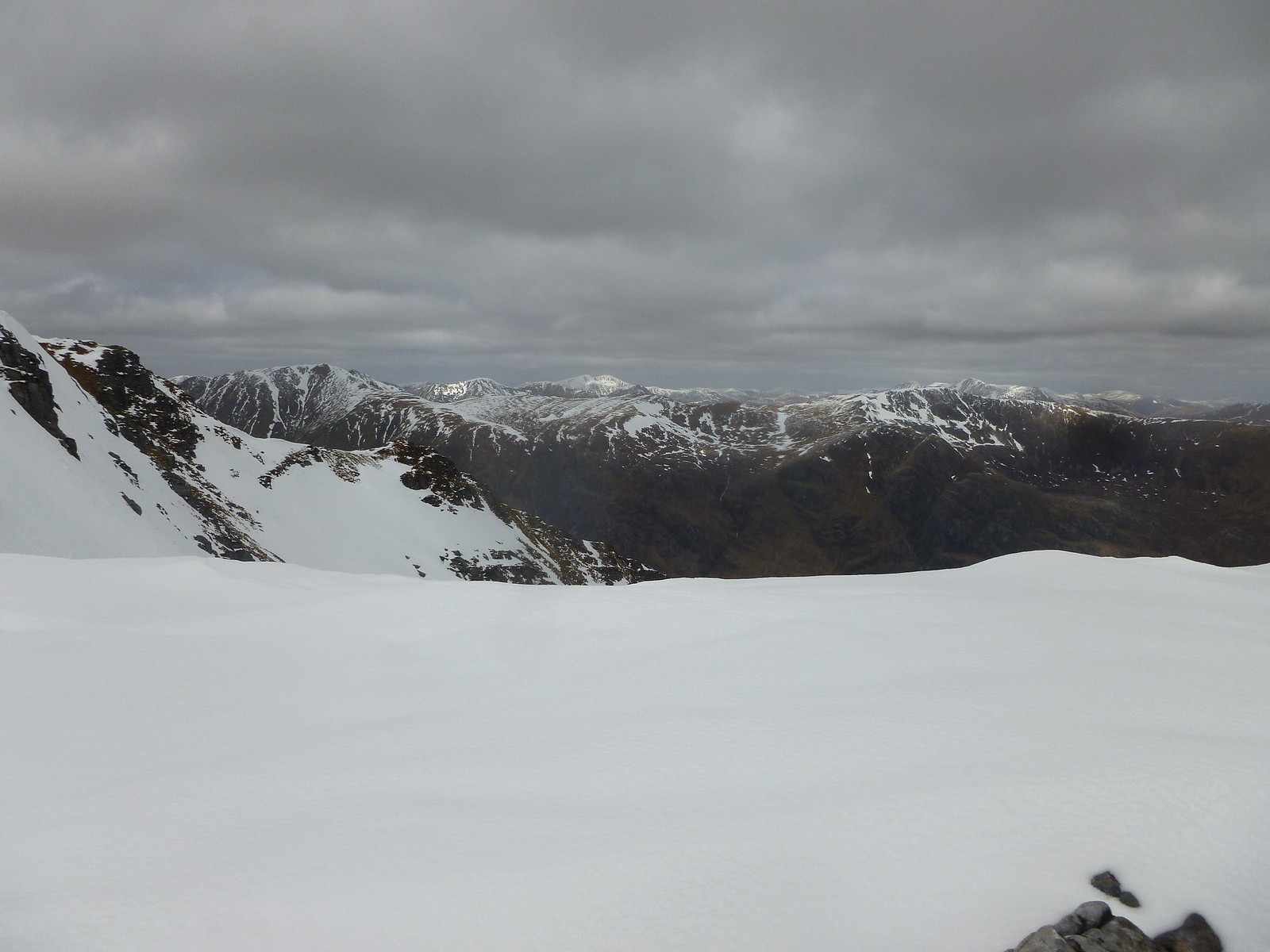 It was pretty blowy as we headed out to the summit. There was a path and footprints in the snow to follow so all we had to do was follow them. Reaching the summit we could see all the way to Gleouraich as well as a fantastic 360 view. The top of Ben Nevis was stubbornly remaining in the cloud but that's not unusual 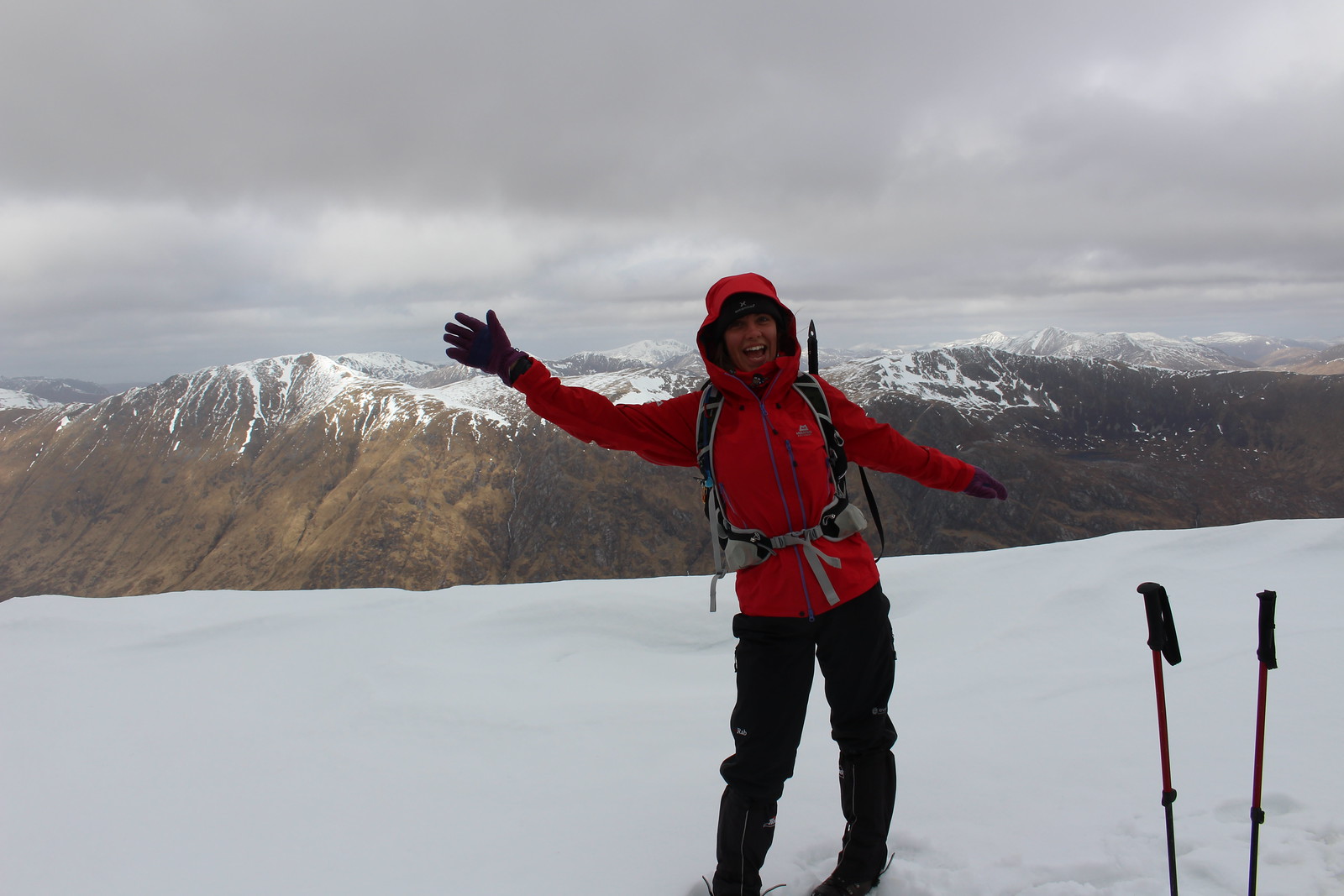 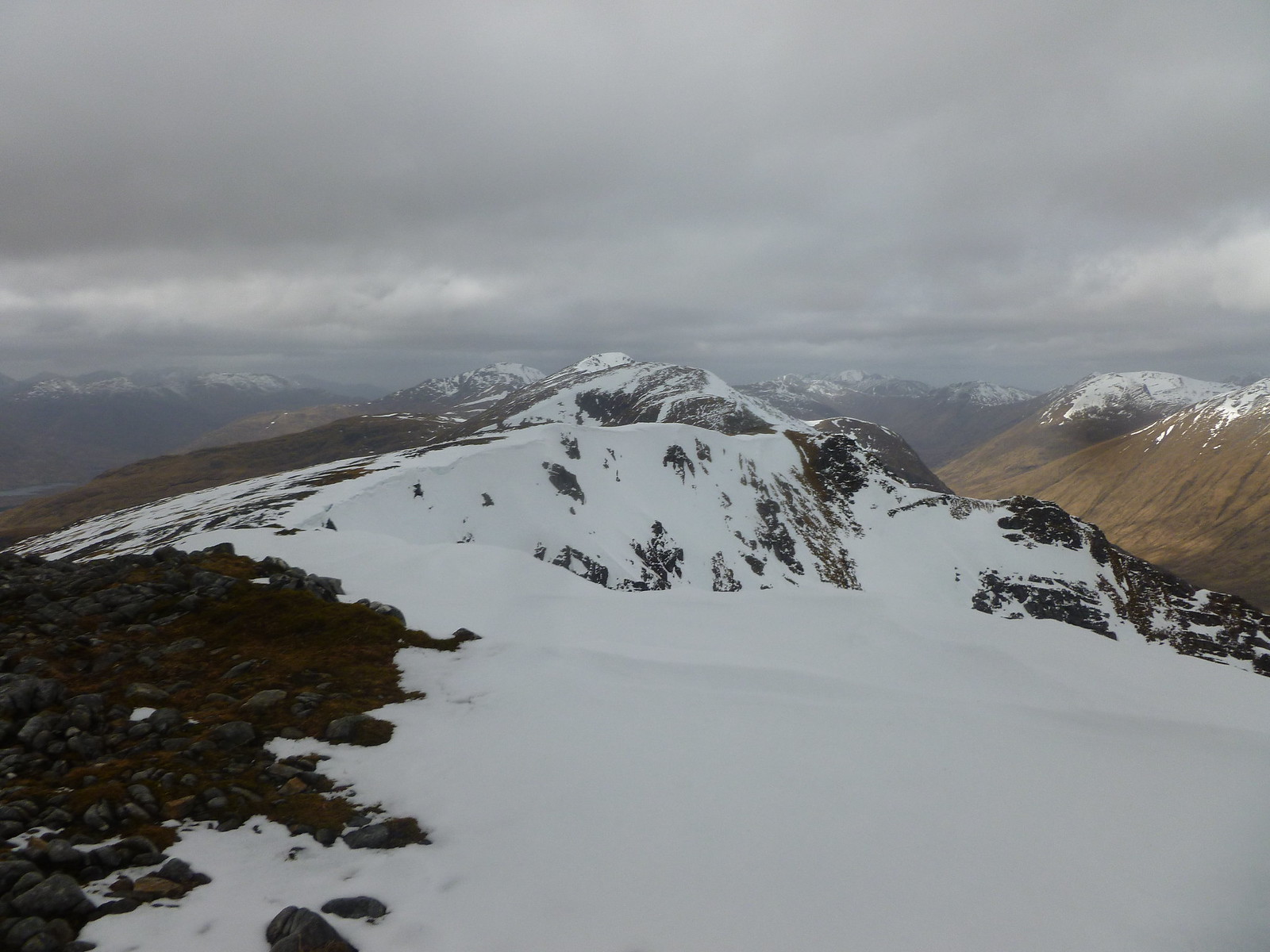 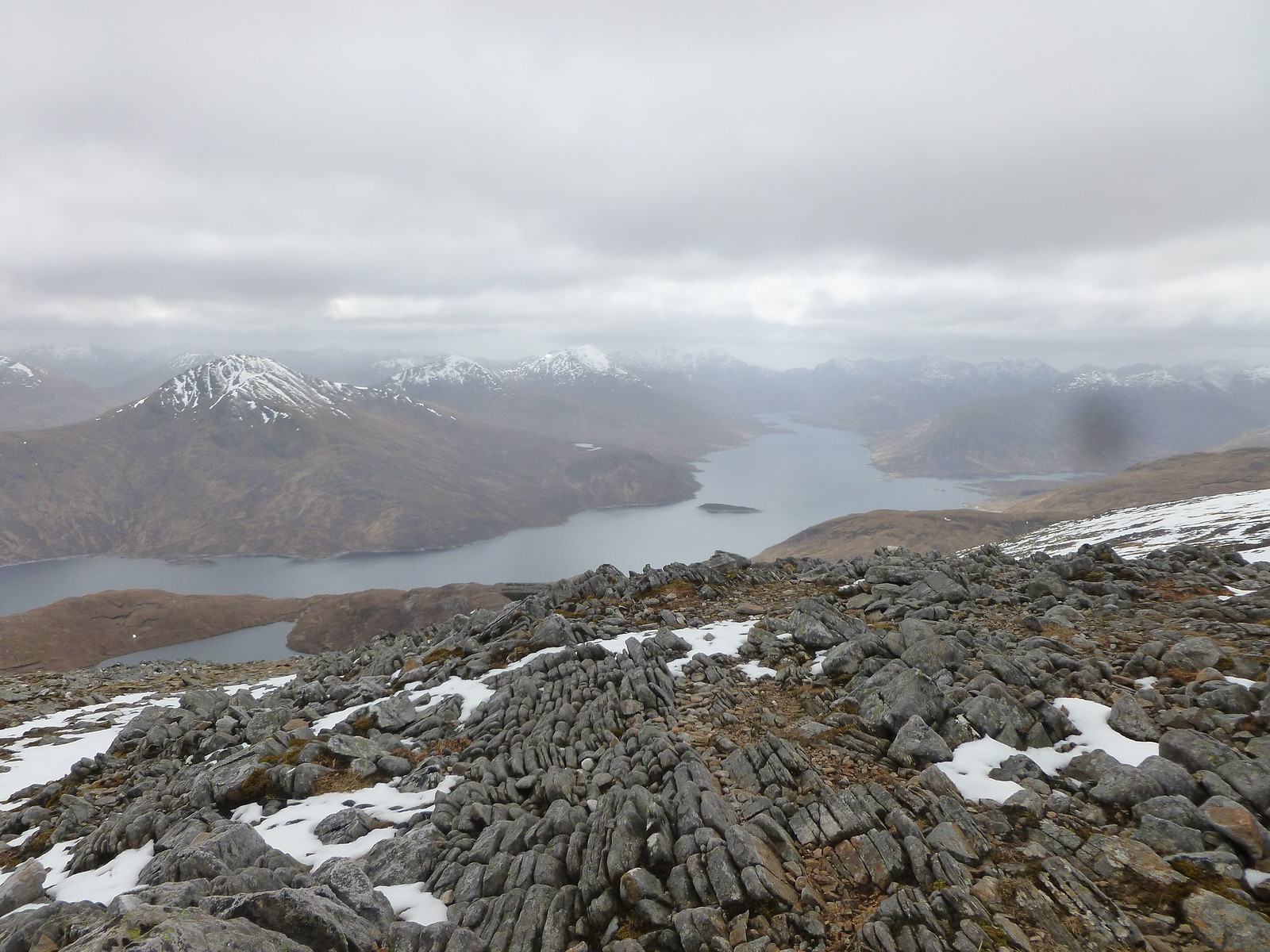 Heading back along the ridge there was a decent amount of descent down to the bealach but a good path most of the way, except when filled with snow. 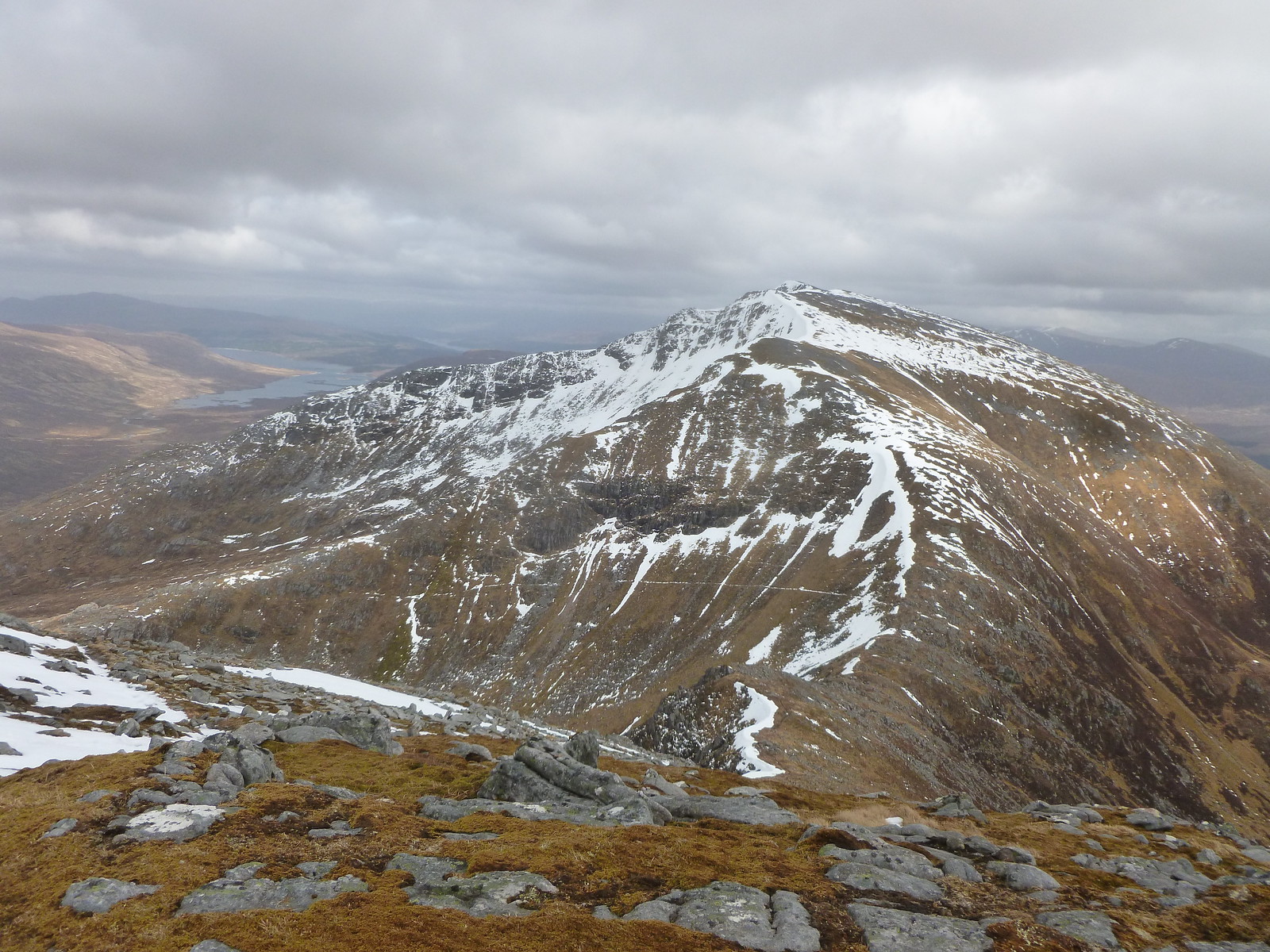 We set off across the ridge and it was as brilliant as it had looked from afar - some easy scrambling, some steeper sections and some simple ridge path. And the views were fabulous. 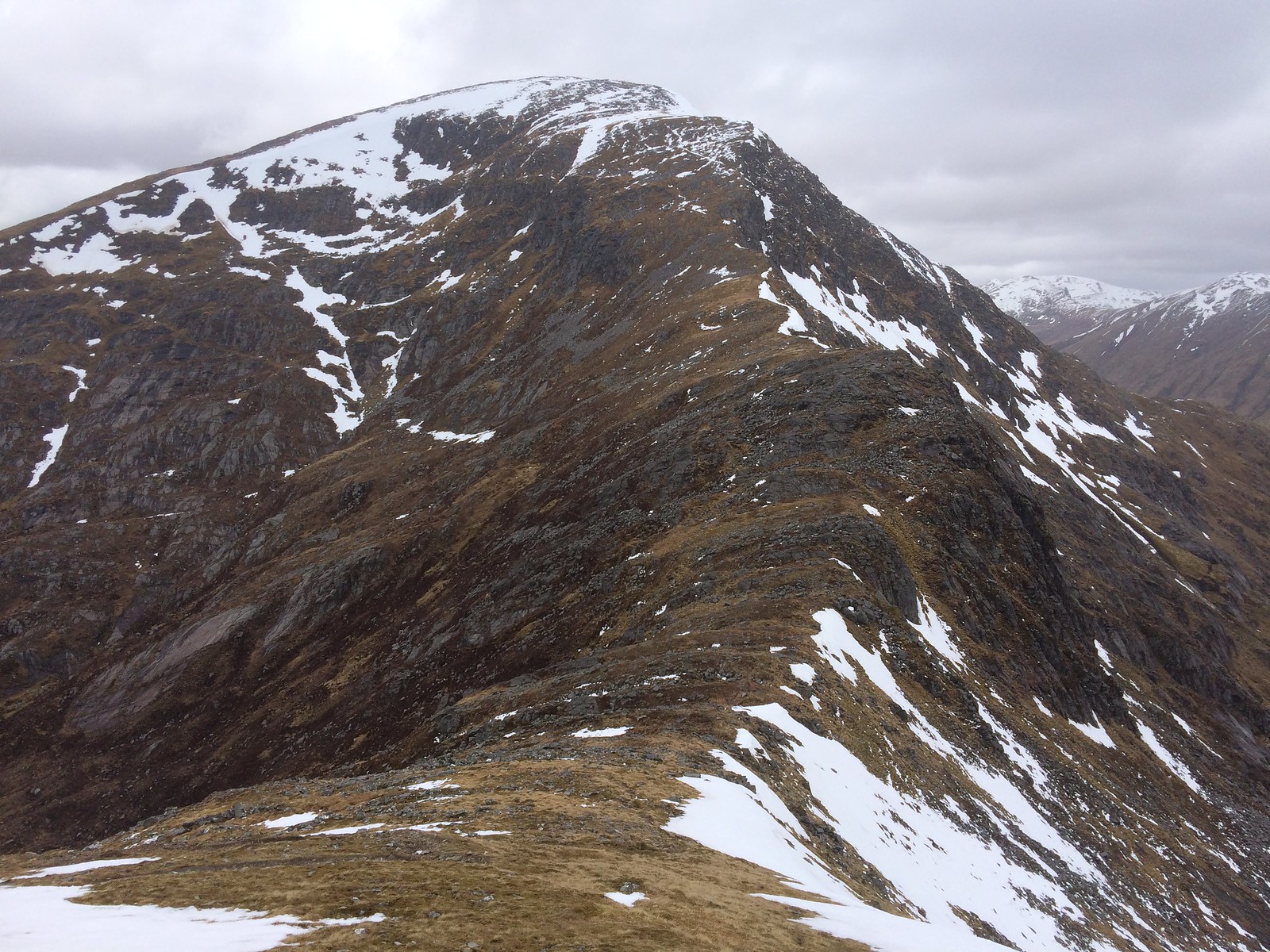 Reaching the top of Creag Coire na Fiar Bhealaich, we could again see the ridge out to the summit cairn just a short distance away. 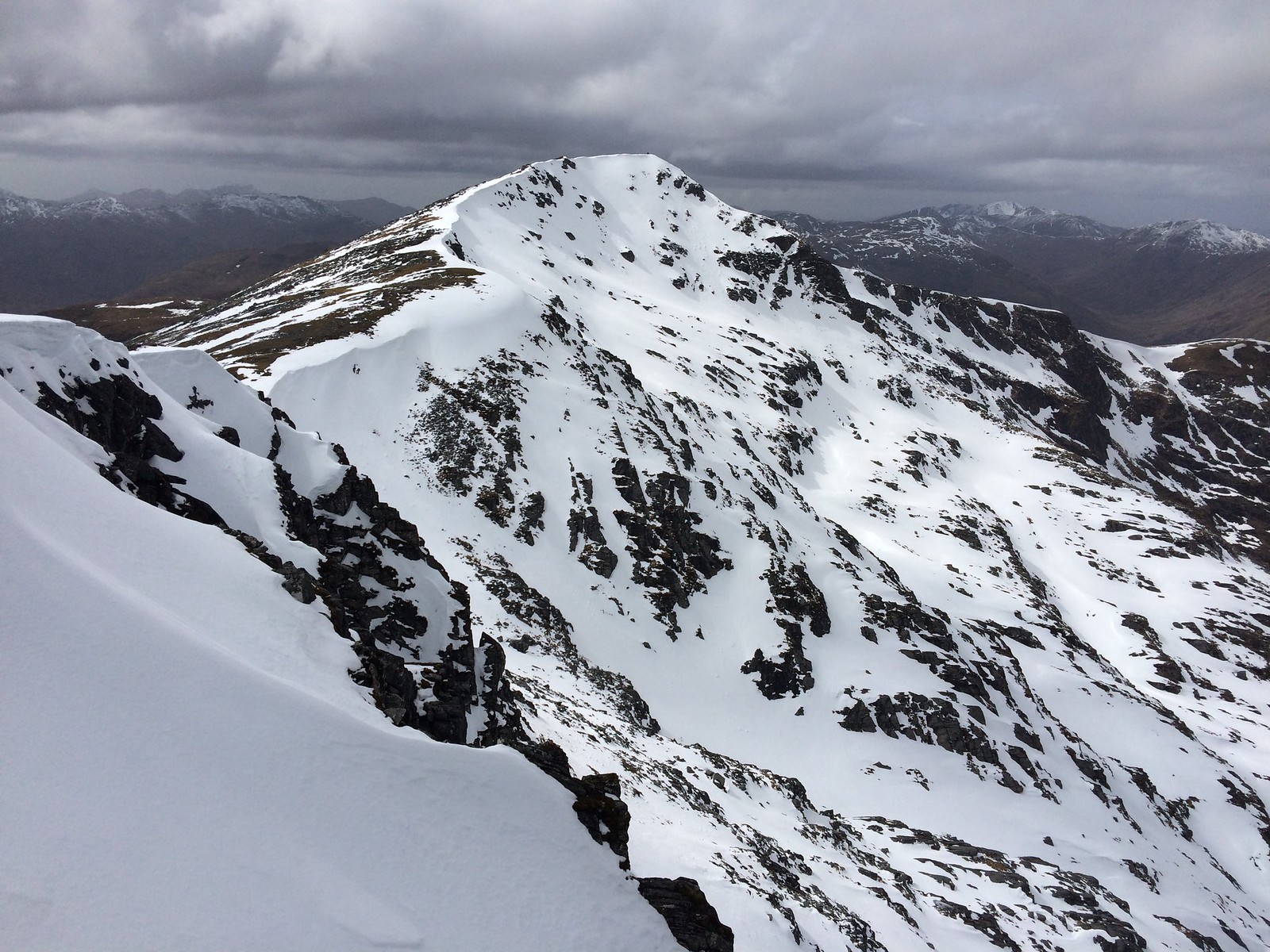 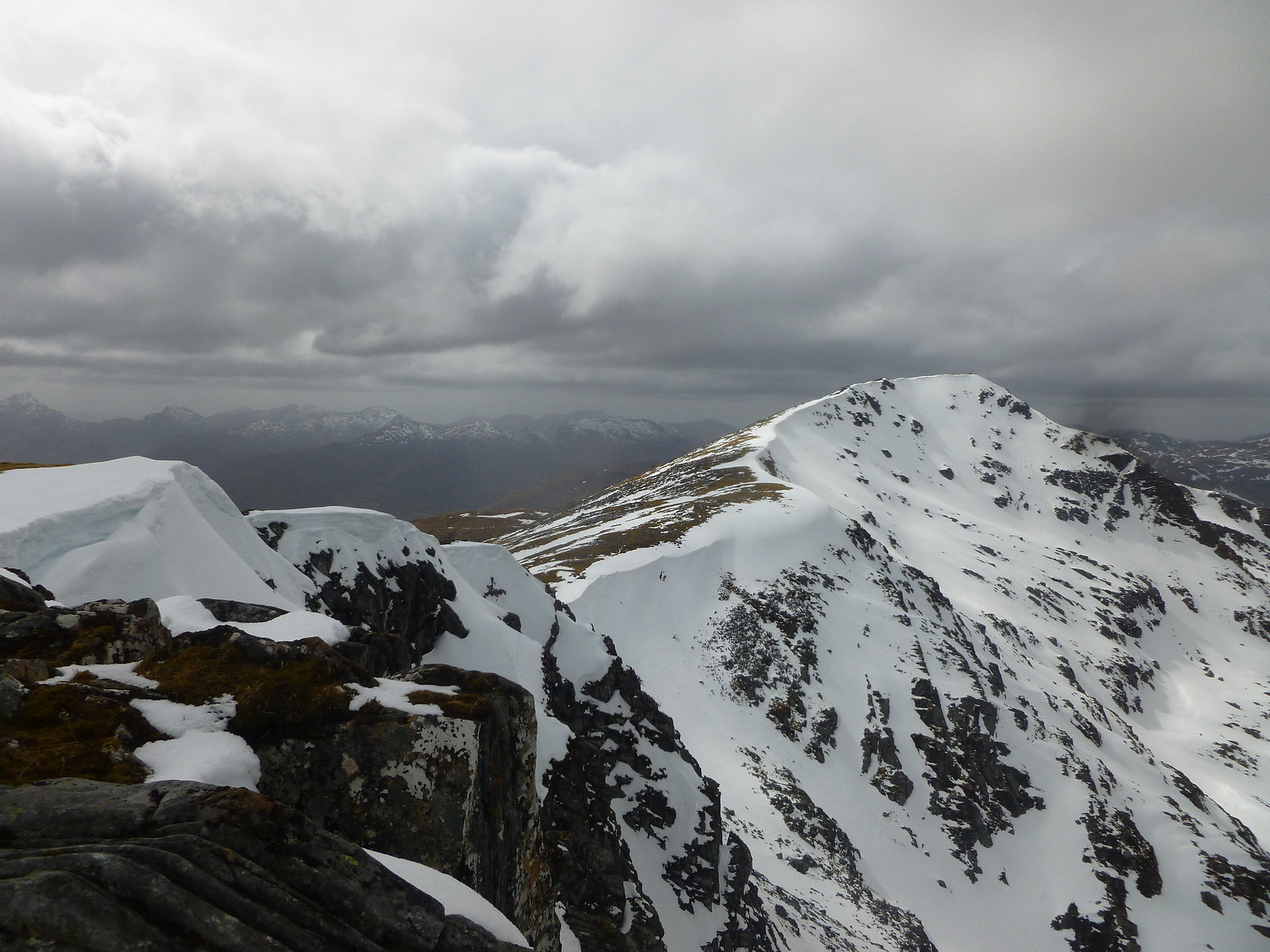 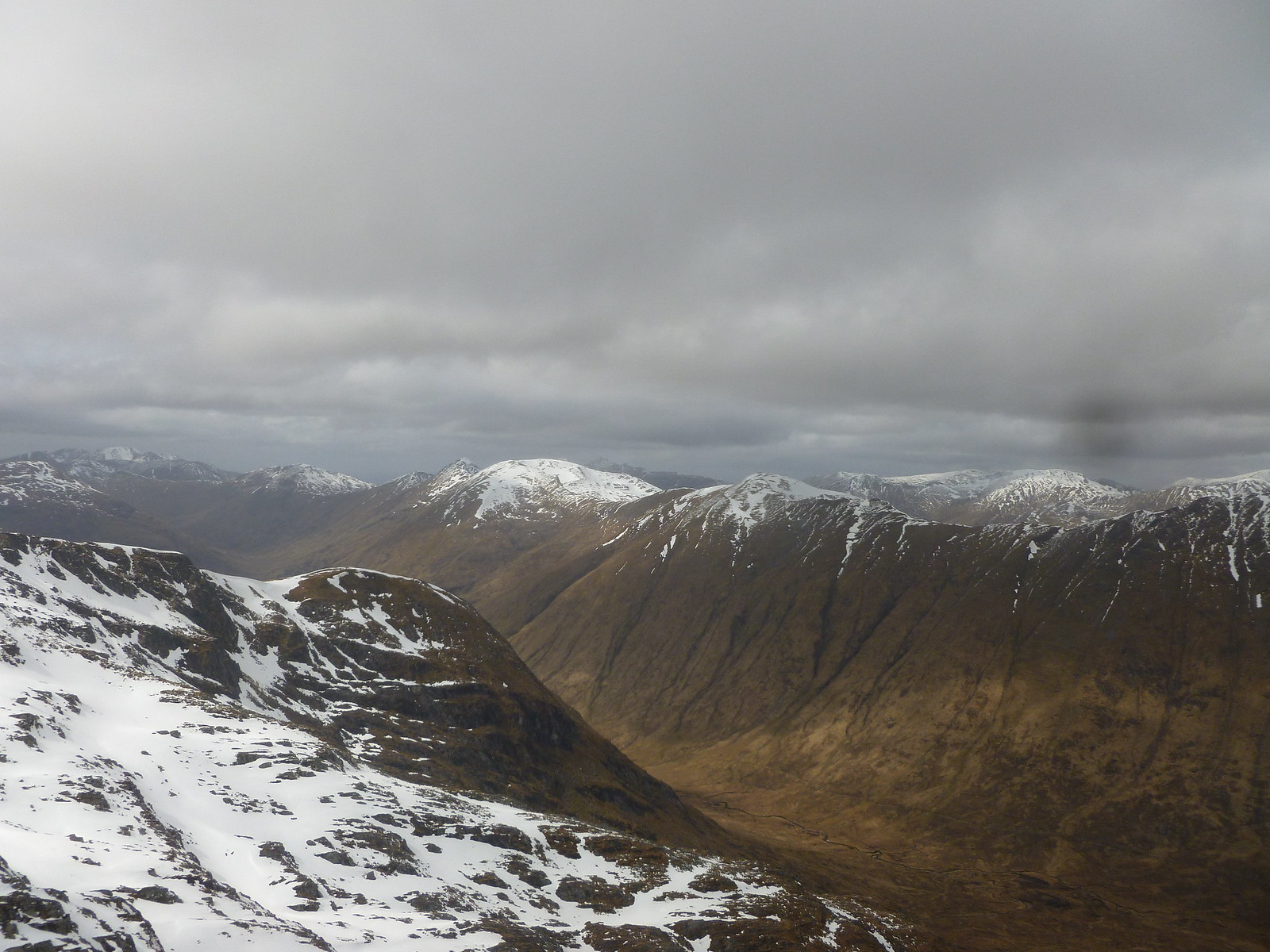 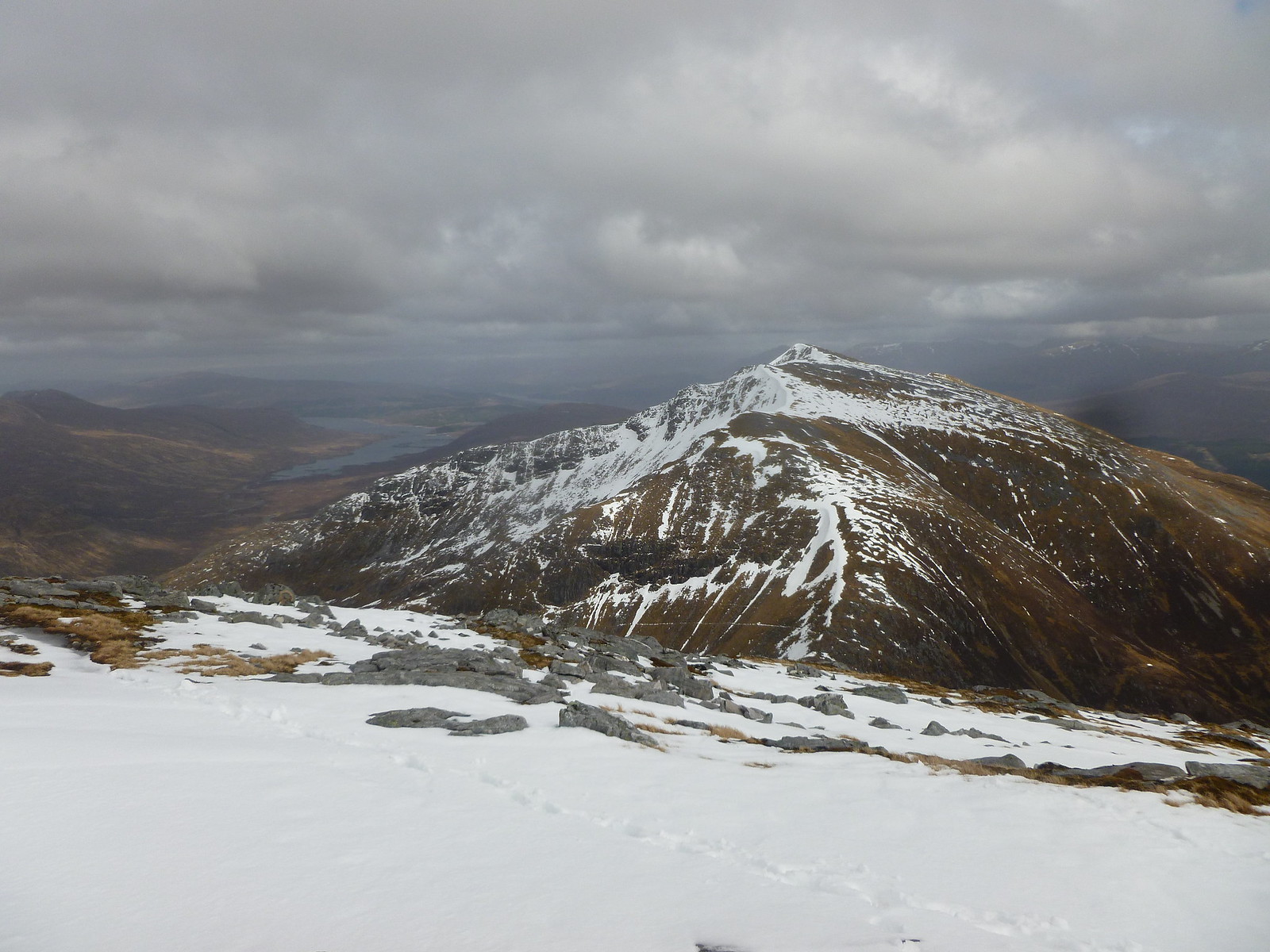 Making the short distance to the summit, the views were absolutely stunning. I couldn't get enough of this view and broke my 'no phone on the hills' rule to get a panorama shot. It was actually less cold and windy here than on the ridge so we enjoyed the views for a little longer

Loch Quoich and towards FW panorama 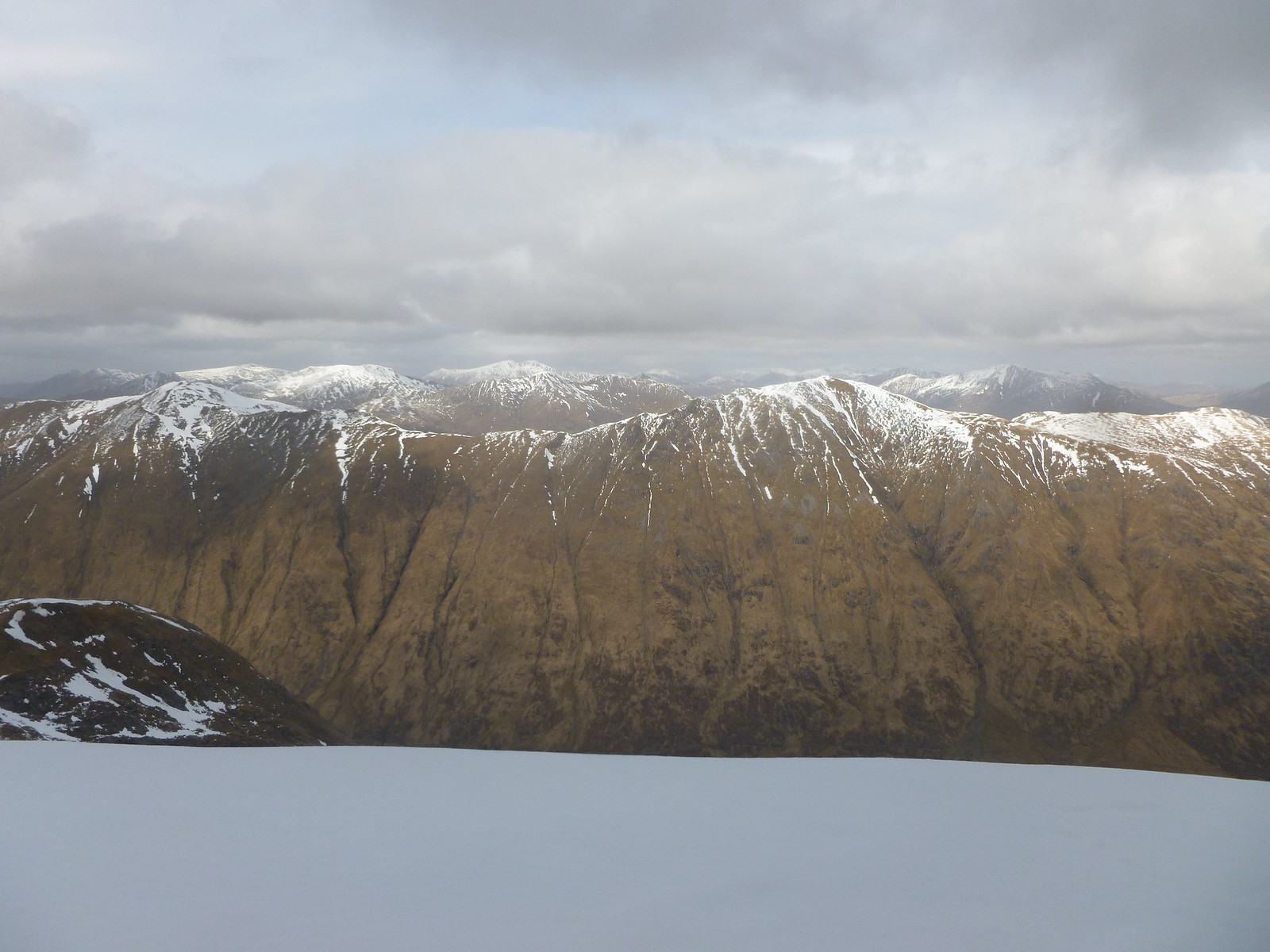 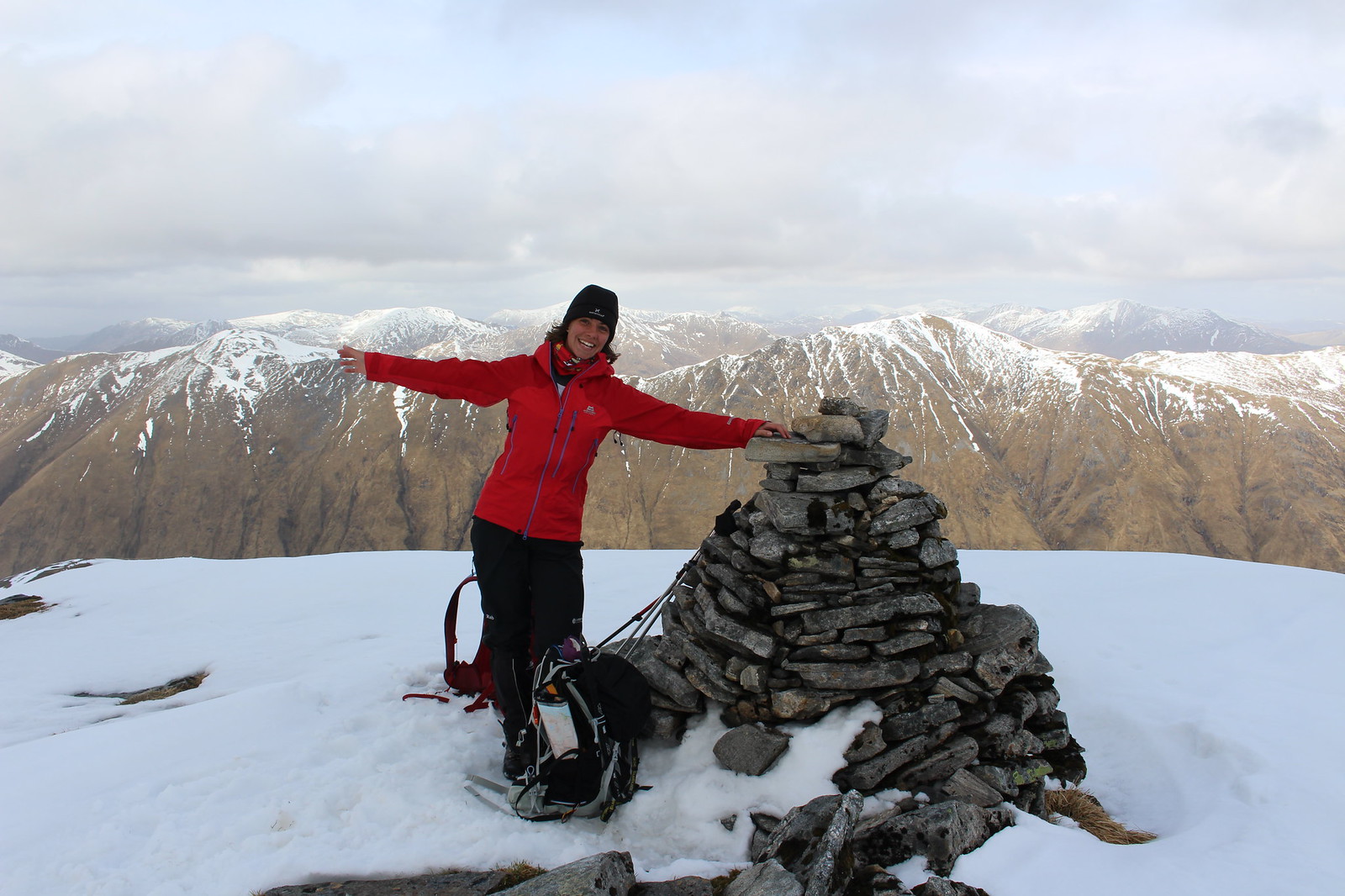 Eventually we realised that it was a lot later than it felt, due to our later than usual start, so we got moving. We continued along the ridge a short distance before turning left and heading down the Druim Seilleach ridge path and then bending to the right.

Looking back up to Gleouraich 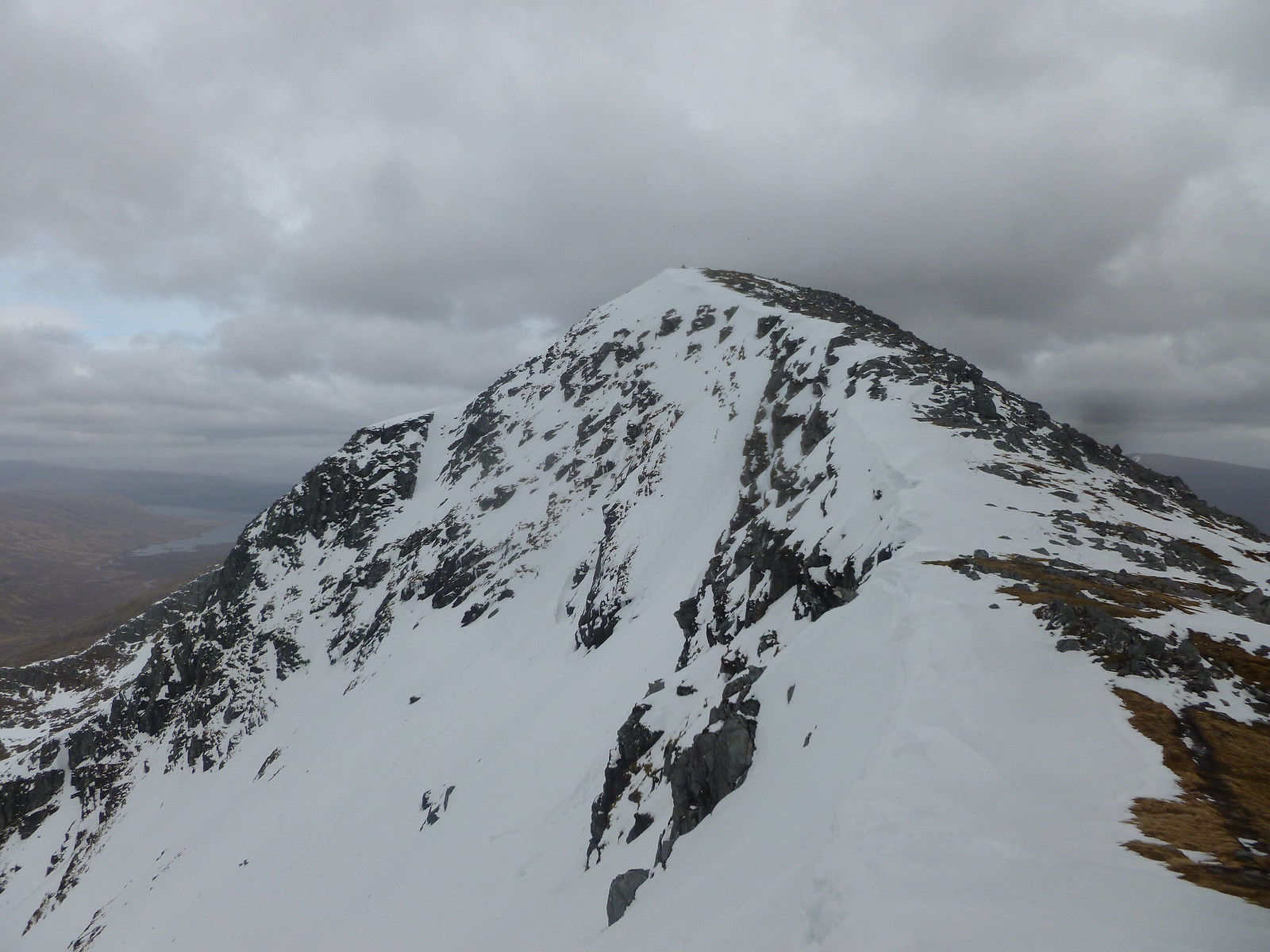 We had a quick sandwich on a sheltered rock and while we were stopped we could see the weather starting to close in a little. After the amazing day that we'd had, this wasn't in the least upsetting, and we headed off down. The views down the cliff over Loch Quoich were awesome and we were enjoying the excellent path.

Sunlight on the loch 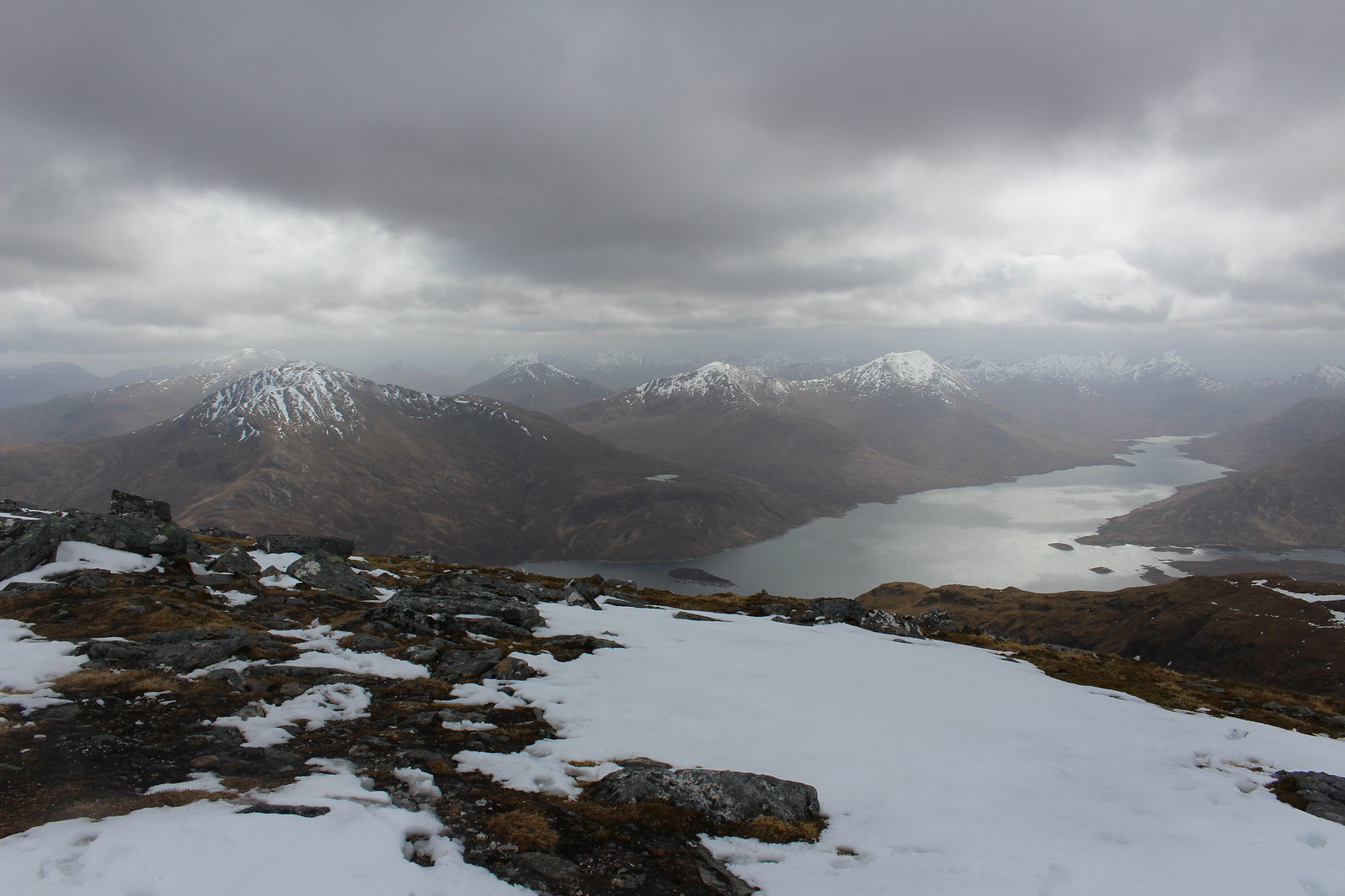 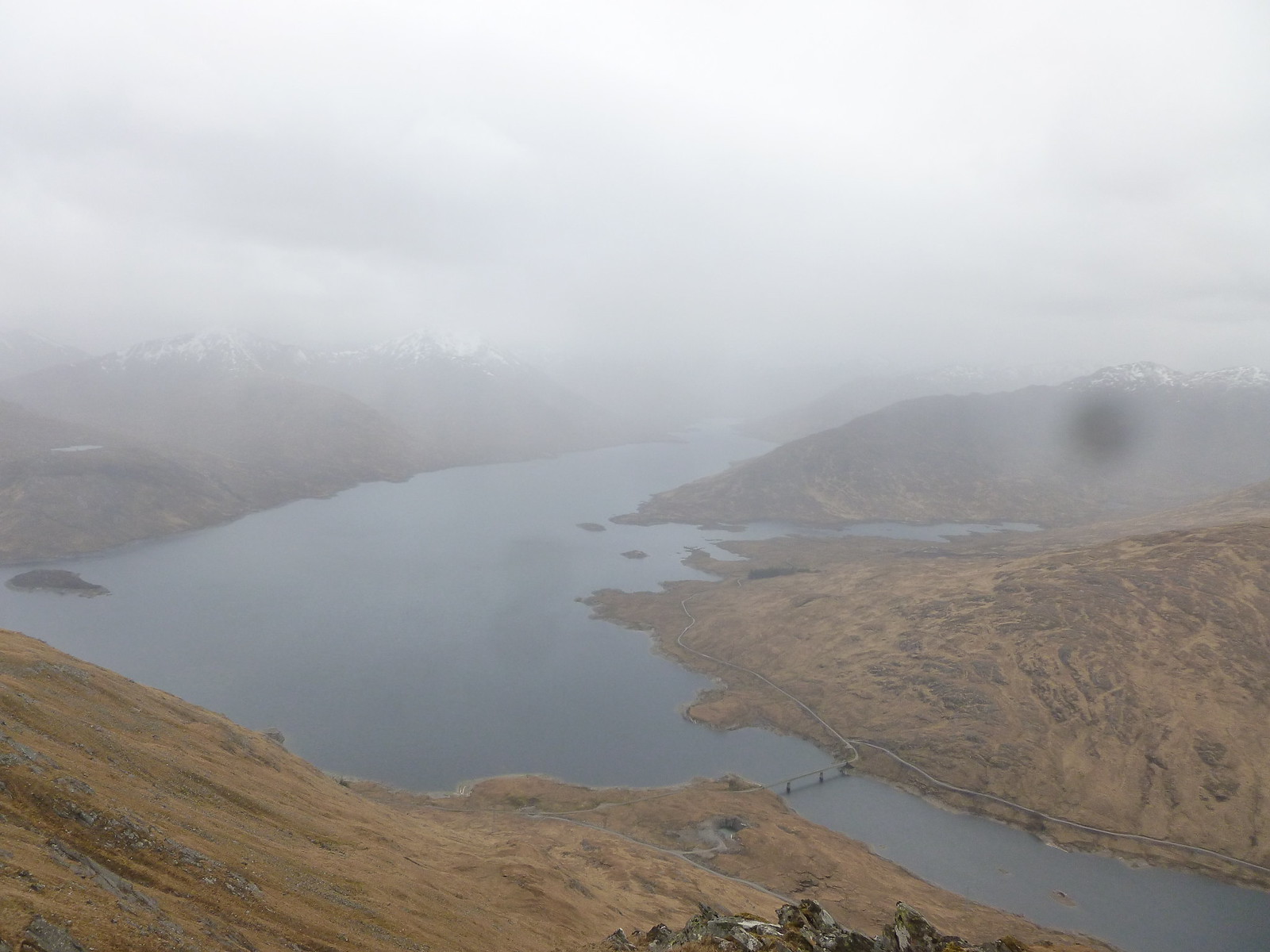 This path soon started to descend more steeply but thanks to the many many zig zags it wasn't at all uncomfortable as we wound our way down the Sron a Chuillin. It soon started raining heavily but as we had never bothered to remove the waterproofs, it was merely a case of putting hoods up and carrying on. 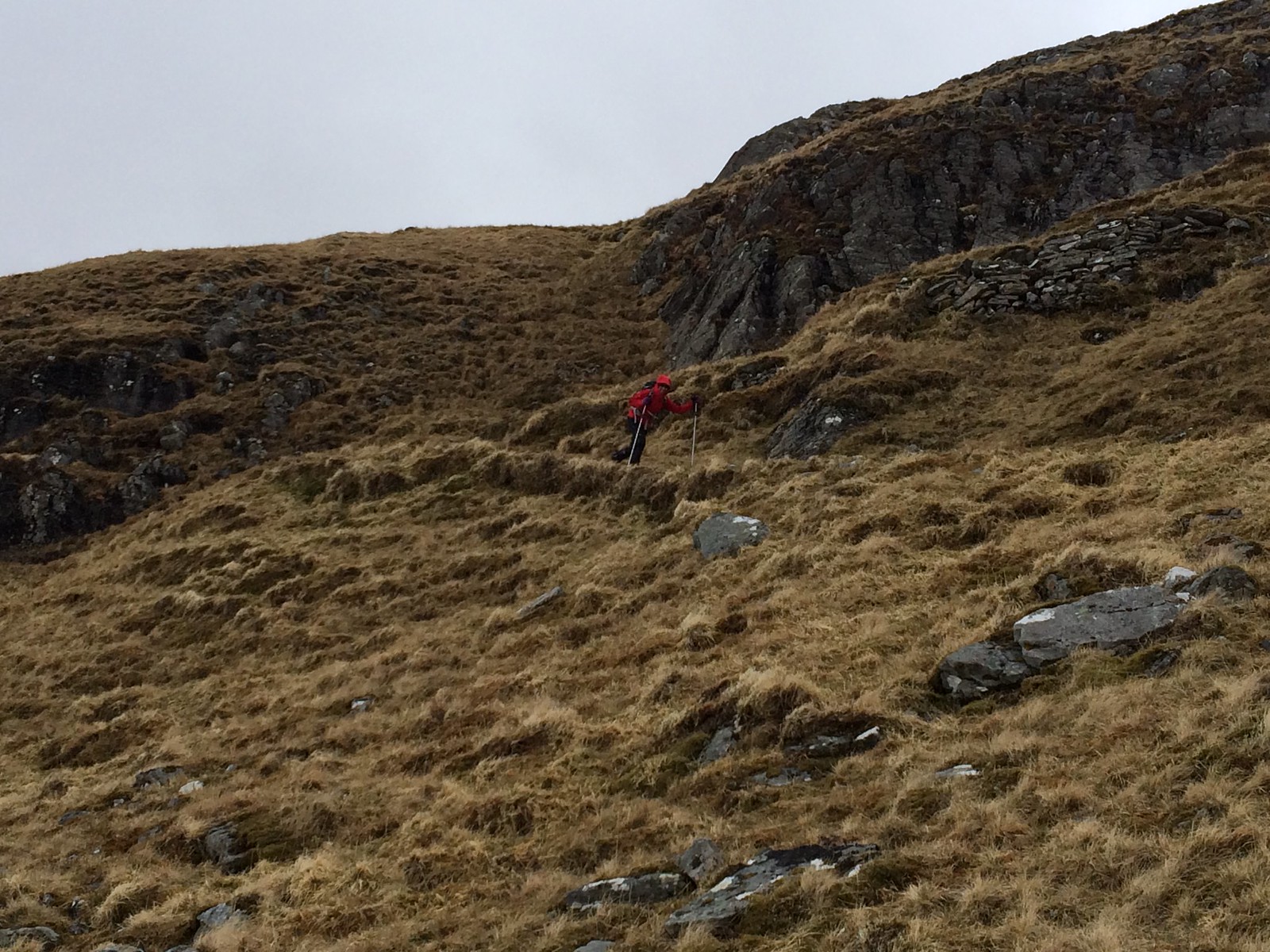 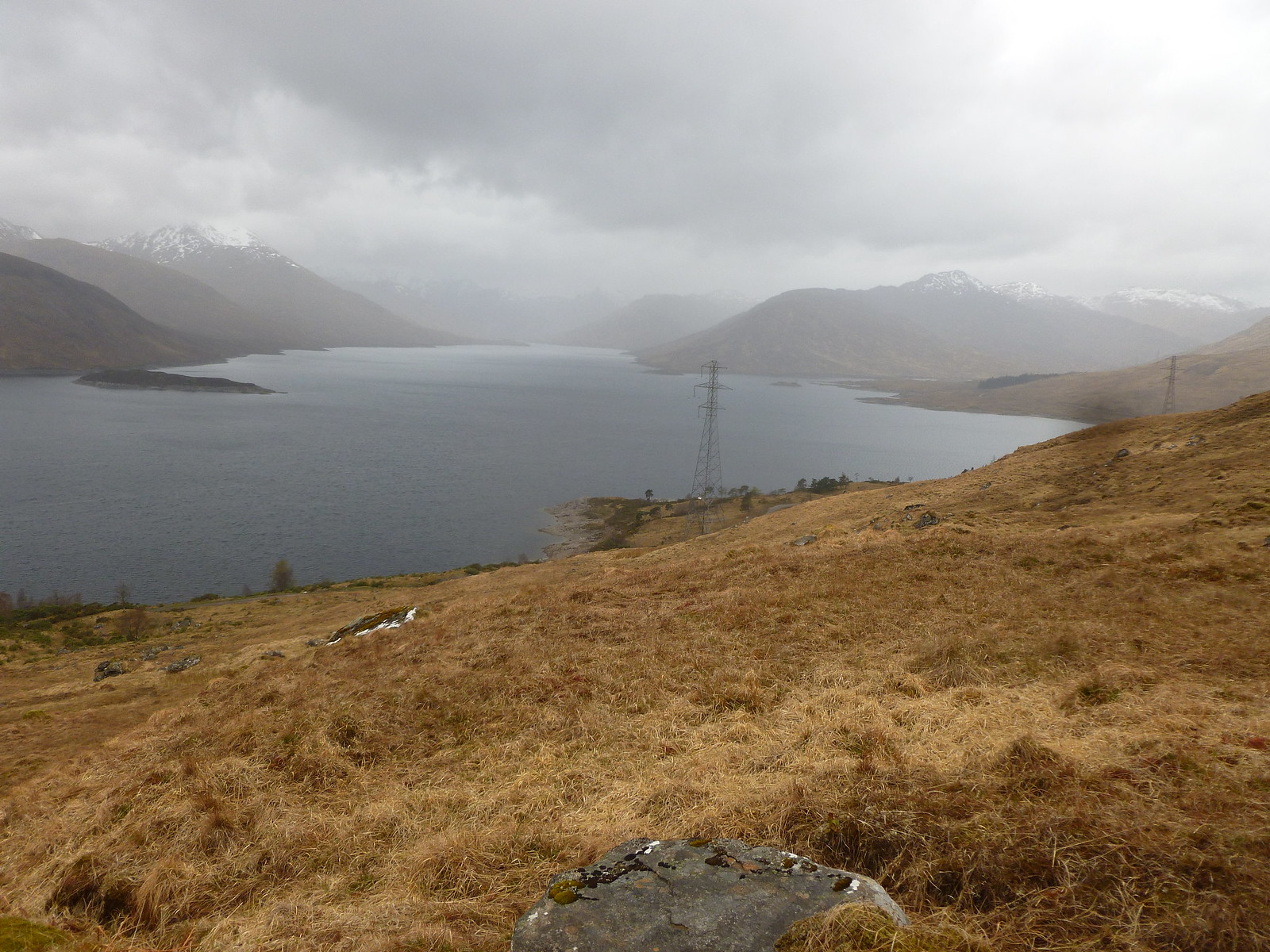 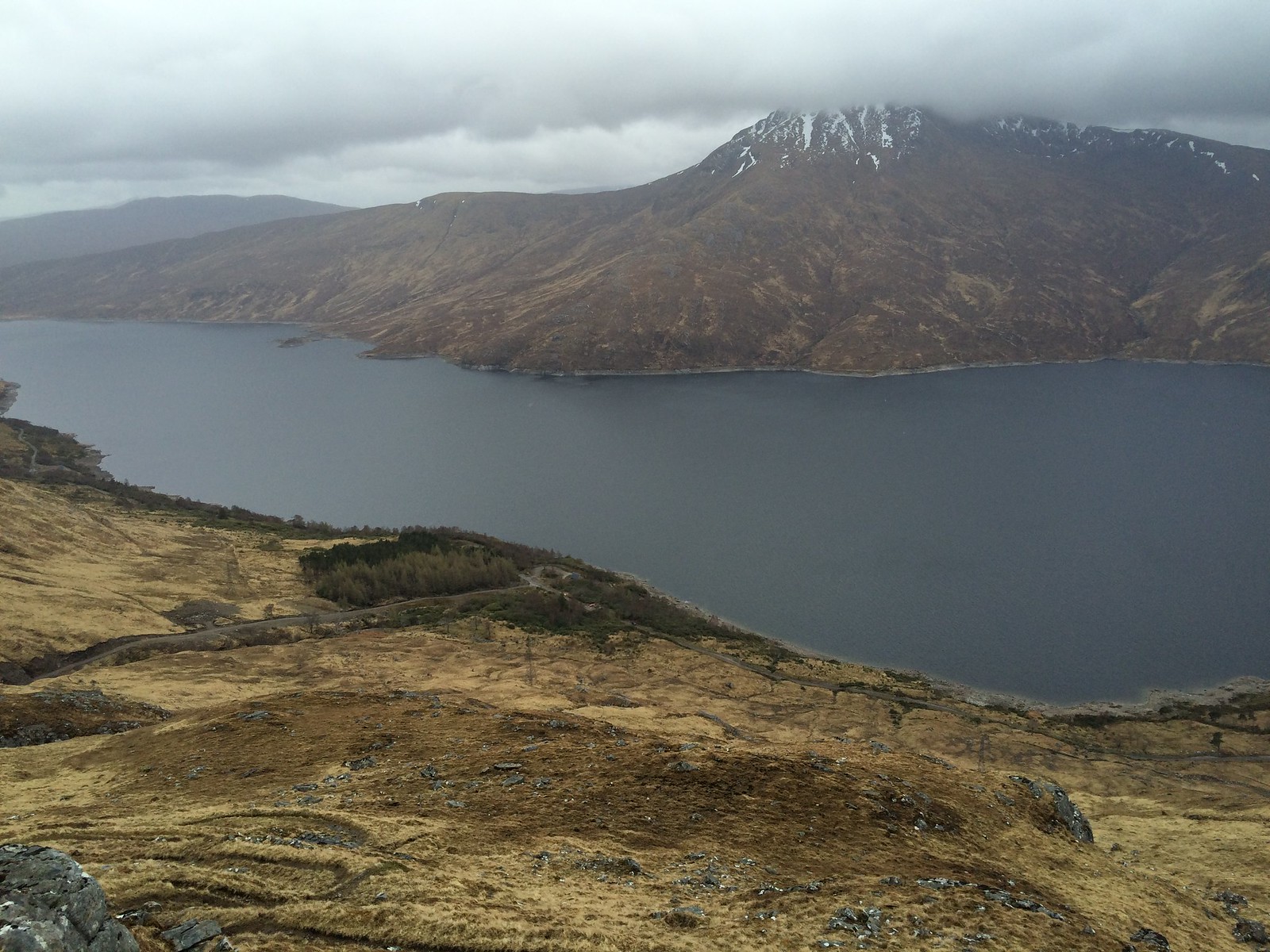 The good path took us all the way down, through the rhododendrons again and back to the car, where we quickly removed boots and jumped in the car. Our cake from the morning was waiting, so all we needed was to get to the Hostel where we could have a cup of tea with it

Despite the wet ending, it had been an absolutely fabulous day, and, looking back up towards the summits now in clag, and across the loch to more clag, we reckoned we had pretty much timed it to perfection - 2 clear summits!

Well done River Wuss for beasting out another report