This 'little' outing was planned a few weeks ago as Pauline suggested she fancied doing Sgurr Mor and as it was on my radar with no plan of attack I volunteered to be her co-pilot.
As with most of my hill days I am utilising the great hospitality of the B&B/hotel fraternity, whichever is nearby and cheapest, rather than travel backwards and forwards all the time. The one obvious drawback is the good old British weather.
As stated on the previous Glendessary WR I spent the night in Roybridge before meeting up with Pauline at the Commando Monument.
Our arranged meeting time was 8.30am which meant as breakfast didn’t start till 8am I had to get a wiggle on eating my FULL Scottish breakfast. I did manage a bowl of cereal, a couple of slices of toast & the full works and a pot of tea – certainly kept me going for most of the day.
I arrived at the monument at 8.25am to find that Pauline was so keen to enjoy the ride along the road she got their at 7.50am having left home at 5am

We kind of agreed that we will head west in my car, so after Pauline had dumped all her umpteen bags in my not very big boot and off we set. Even though I had 'enjoyed' the road yesterday, we still missed a turning and headed off in the wrong direction, mainly because we were too busy talking

Once heading the right way we eventually reached the parking area and it wasn't a huge surprise that there were no other cars. Whilst we getting kitted up a guy was wandering in the direction of civilisation carrying the biggest rucksack you could imagine, Pauline thought he looked like a Sherpa. I did see a small tent by the river yesterday and guessed that he had been the occupant. On the way back much later on, we saw what looked like the same tent about 10 miles nearer to habitation

We set off just before 10am in rather good spirits, it wasn't long before we started to warm up & I had to stop to remove a layer. Pauline tried to have a drink from her hydration pack only to find that it was completely empty, luckily there was no shortage of water and she opted to fill up sooner rather than later 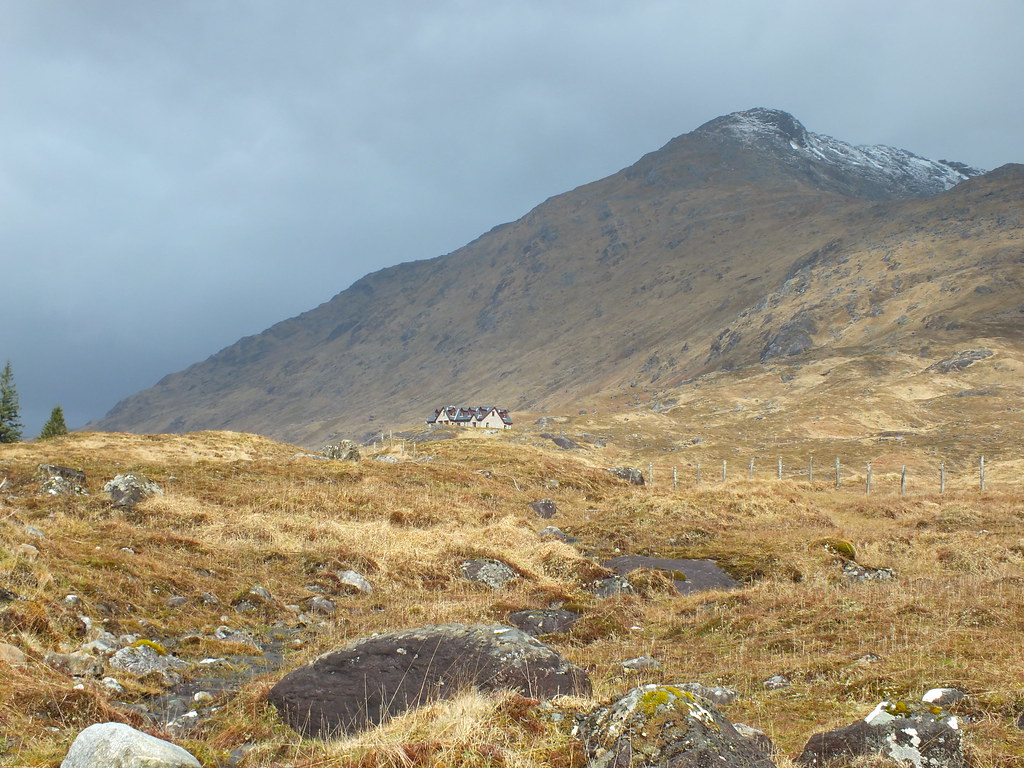 Glendessary Lodge in the distance 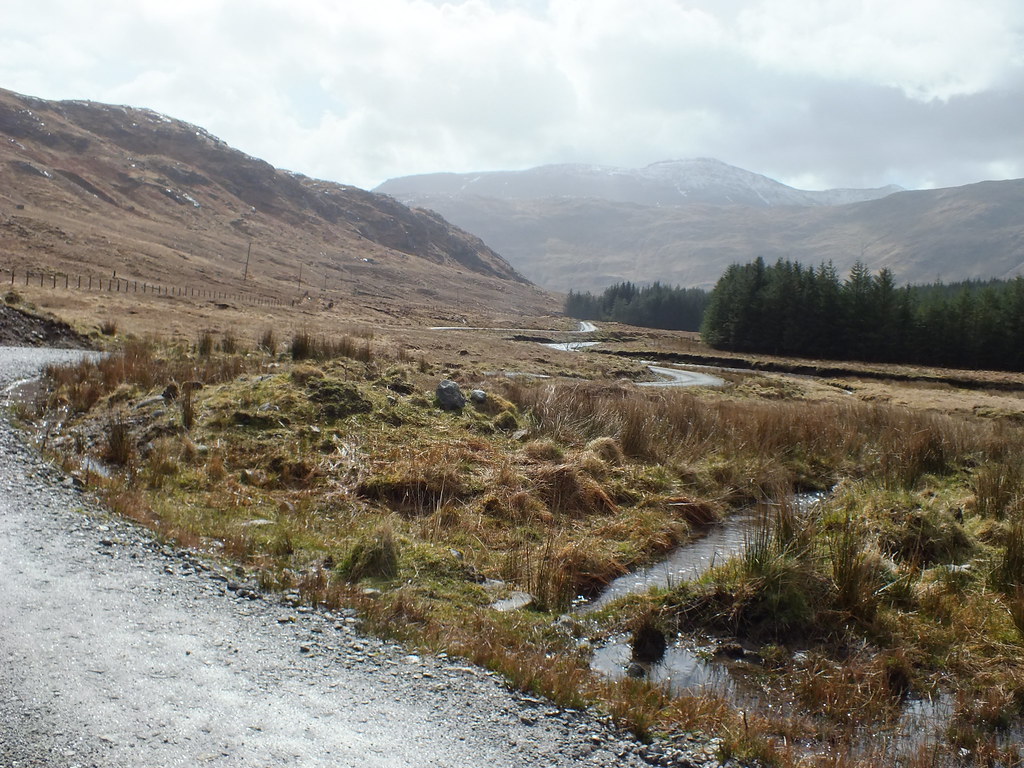 Looking back at the windy track & standing water 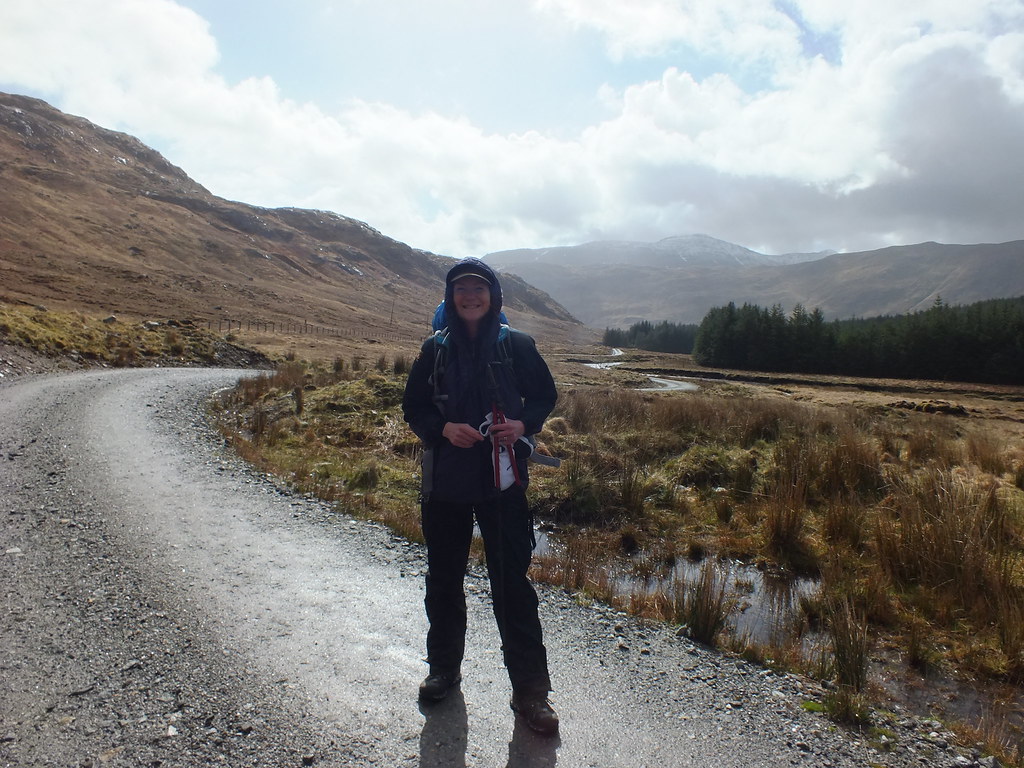 Happy now, would it continue? 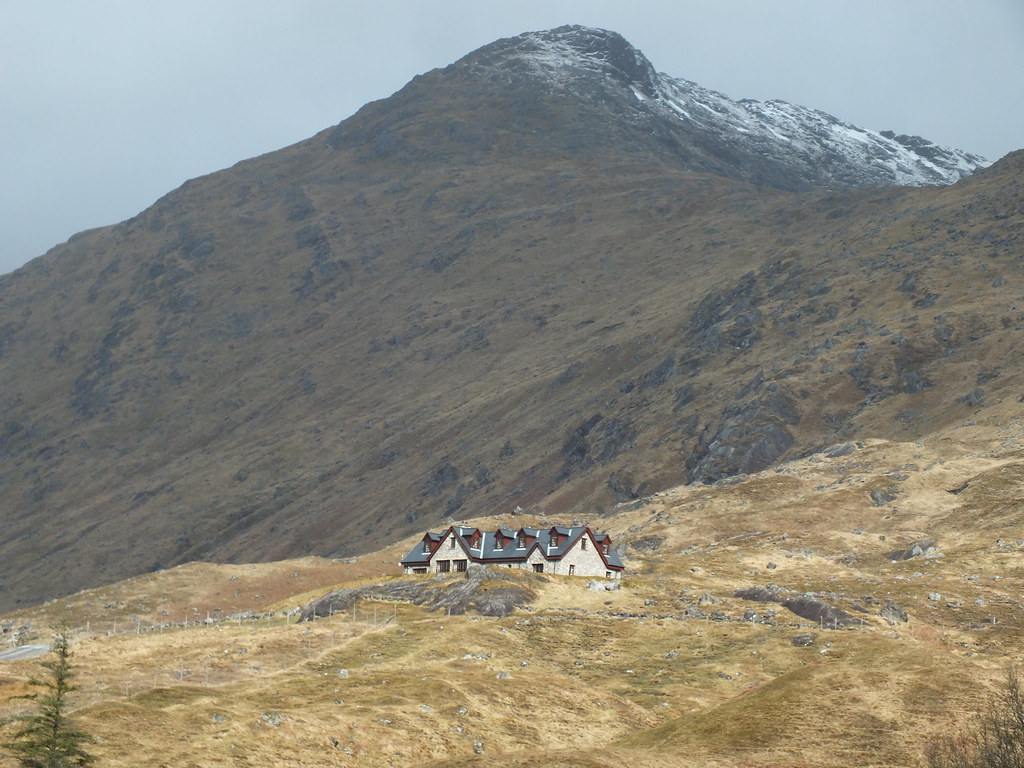 The lodge a bit closer 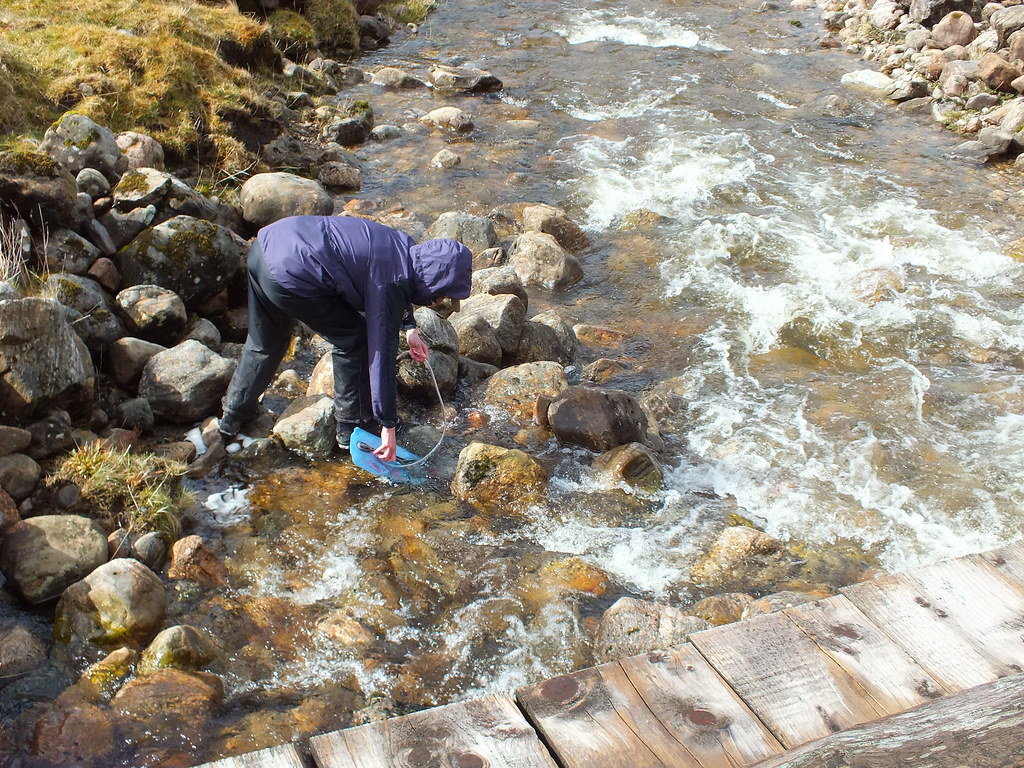 Time to fill up 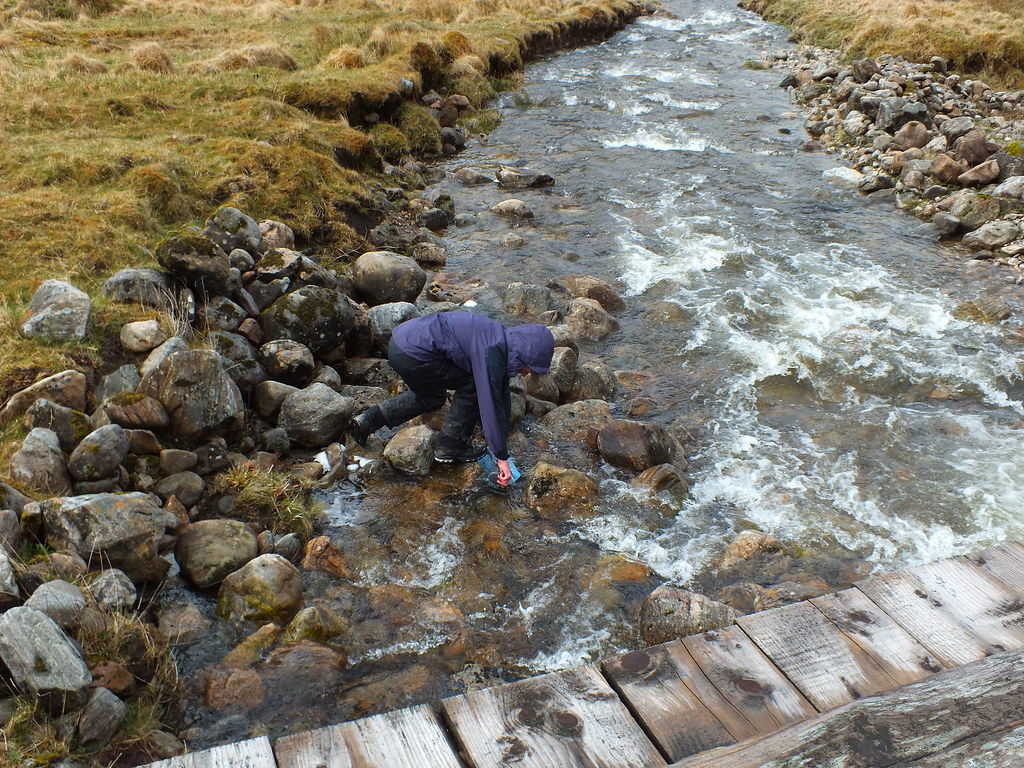 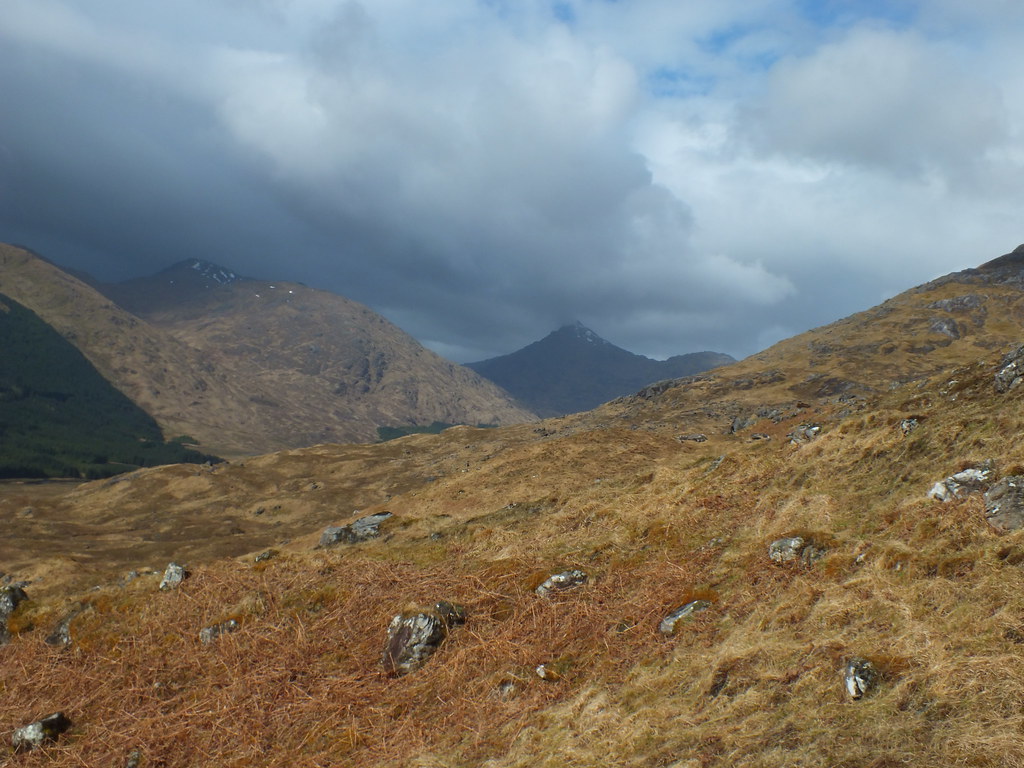 Once over the wooden bridge it was time to leave the track and start splashing and paddling, we were also heading uphill, albeit a very slight incline 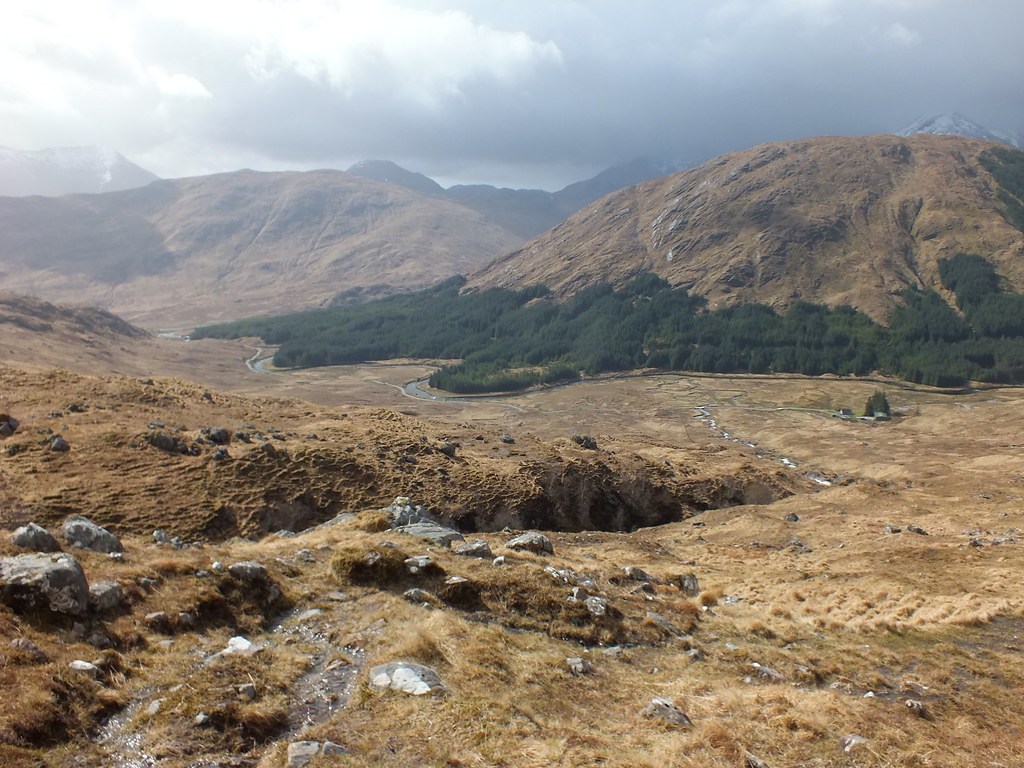 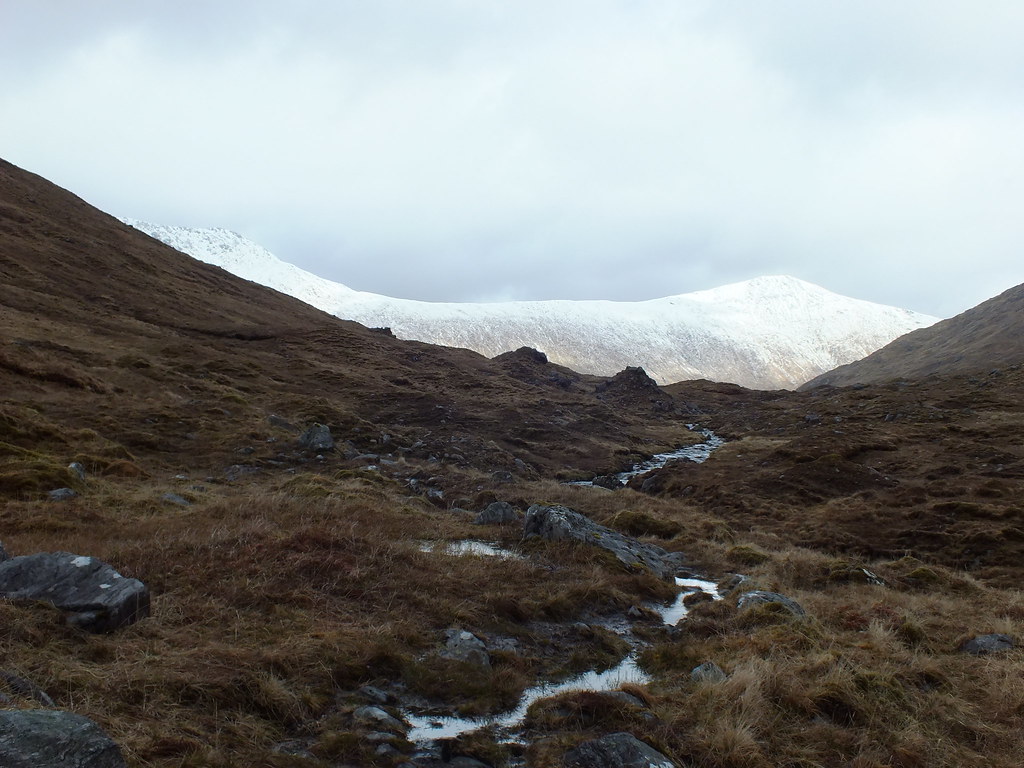 First peek of what lies ahead in the distance 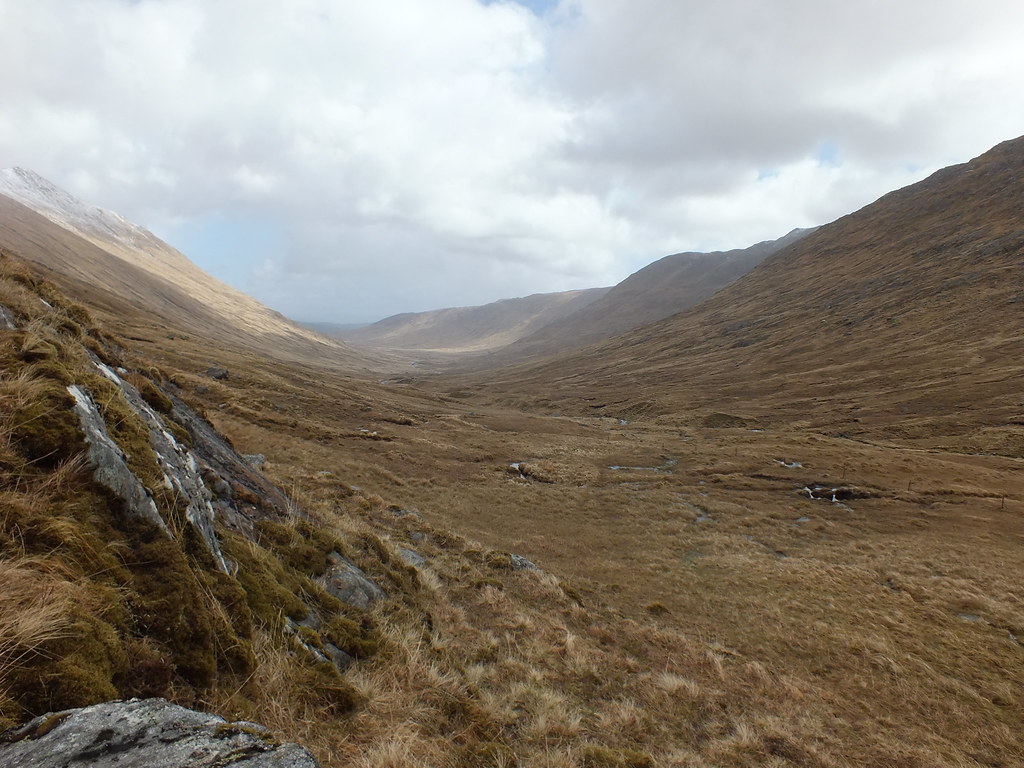 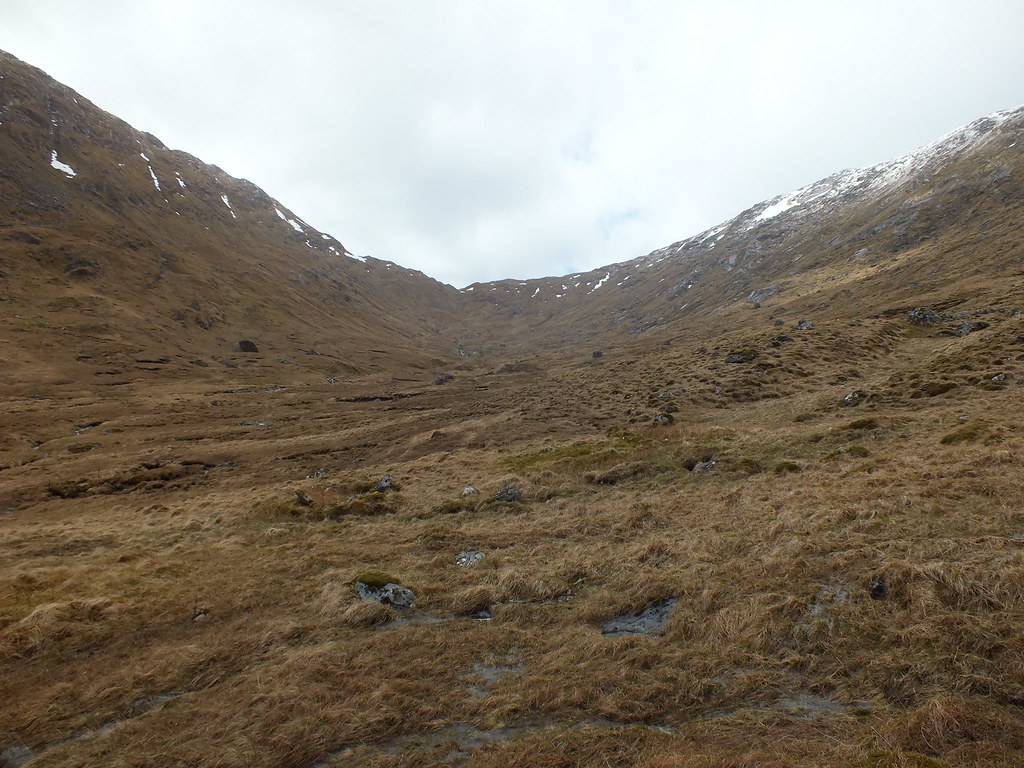 Glen Kingie, the other way

As we entered Glen Kingie we could see and more importantly hear the River Kingie, we knew in advance this was going to be a problem, whilst we were splashing our way towards the river we came up with a superb plan

As you approach the river from the south you can see Sgurr Mor and the ridges/bealach's etc on either side, so our plan was to go for the direct route and join the ridge at the bealach between Sgurr Beag and Sgurr Mor. We figured looking at the terrain it was very doable

So we headed directly towards the river, as we got nearer the noise increased and our plan was looking in jeapardy

The river was not only fast flowing, it was also far too deep to contemplate paddling across. There are plenty of boulders scattered in the water but they were either too spread out, had water running over them or not the right shape to take a size 8 boot

It was another of those 'here we go again' moments, we have all been there wandering along the river bank looking for a safe crossing point

I would guess we trapsed along the river bank for the best part of a mile, Pauline was getting fed up of plodding in the wrong direction and was convinced she had found a suitable spot with about 5 or 6 large (ish) boulders to utilise. Being the true gent that I am, I had to let Pauline go first so she went for it - all was going very well until she reached the final hurdle, the last boulder, her foot slipped and down she went, rear end got a dunking, but within a millisecond she pulled herself up and was on the other side

Now it was my turn and being a wimp I decided to keep plodding along the river bank, I came to a part where the river splits and an island is created in the middle, this was my chance. I reached the island easily but there was nowhere on the other side to cross. I then wandered along the island until I reached the end and decided this is it, go for it. I didn't know where Pauline was at this time as I was concentrating and committed, turned out to be easy

Next task was to find Pauline, I didn't know it but she had spare clothes in her rucksack, only females would think of that

By now we were on the west side of Sgurr Beag, we had a couple of options, do we continue along Glen Kingie and go up a lower slope or do we just head uphill

Being adventurers, we took the second option and just headed uphill.
My legs were certainly feeling the strain of yesterdays trek and we must have stopped quite a few times, sorry Pauline 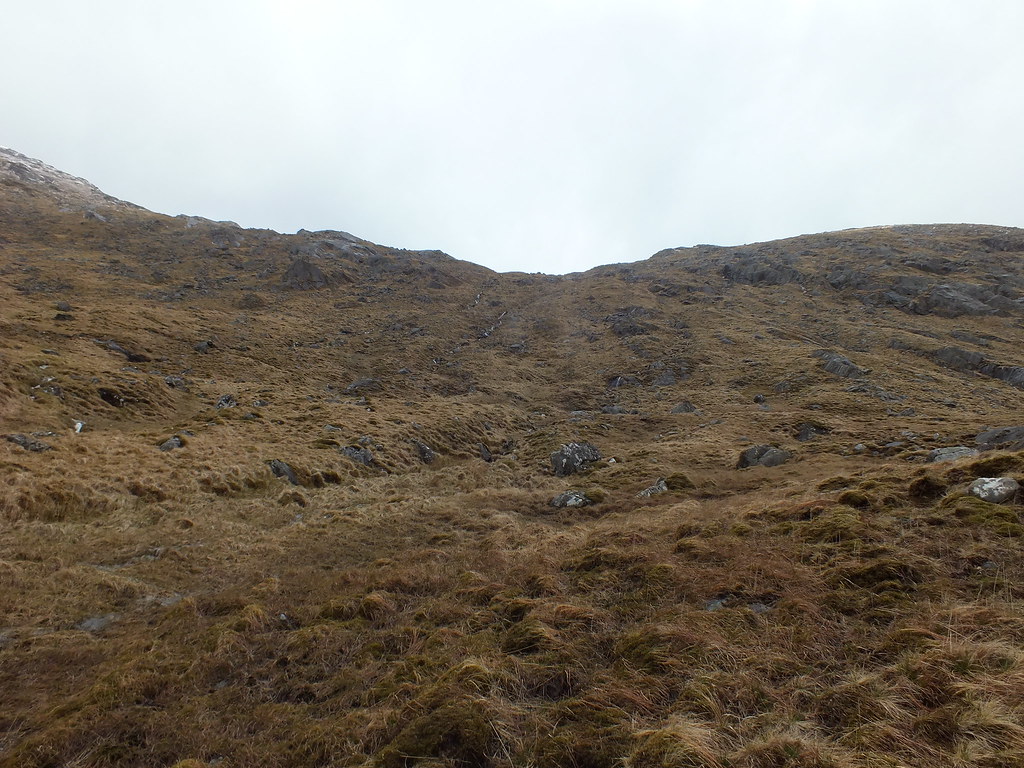 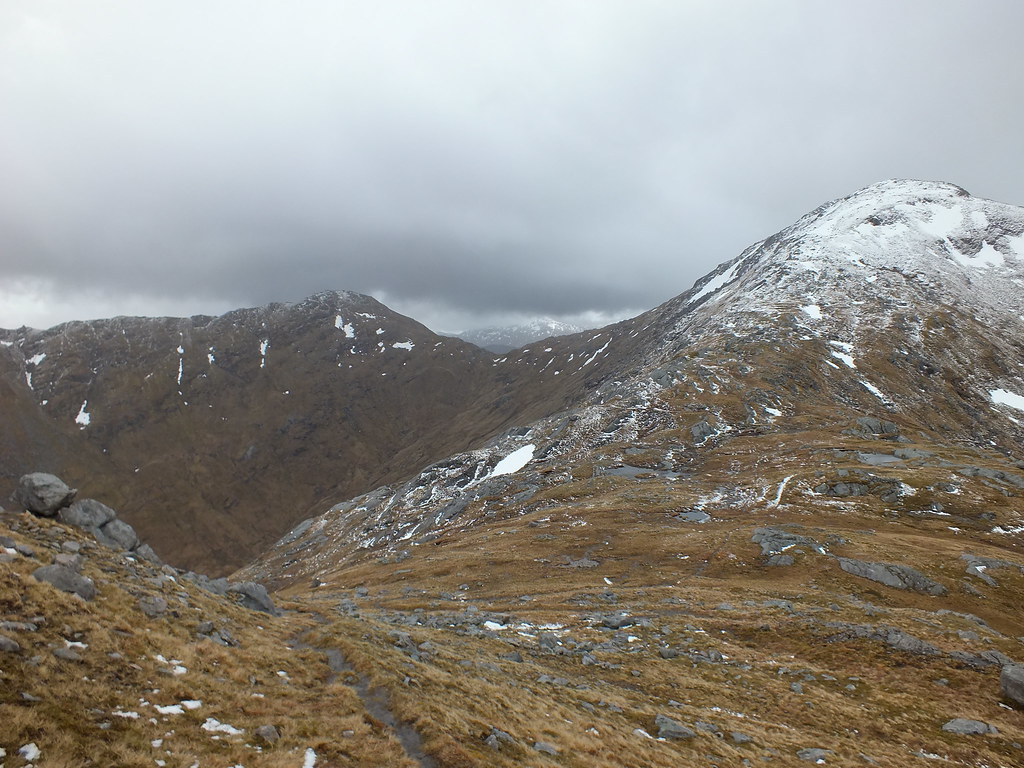 When we reached the ridge the wind was becoming a serious problem, considerable buffeting was an under statement at times, especially when we were ascending up the zig-zags. The descent off Sgurr Beag was interesting, there is a path, but because there was a fair covering of snow we had to kind of guess where it was and pick the safest way down.
Next was the final push up Sgurr Mor, I certainly found it a struggle and the cairn was a really welcome sight

The camera came out of the rucksack as we had some cracking views, you be the judge 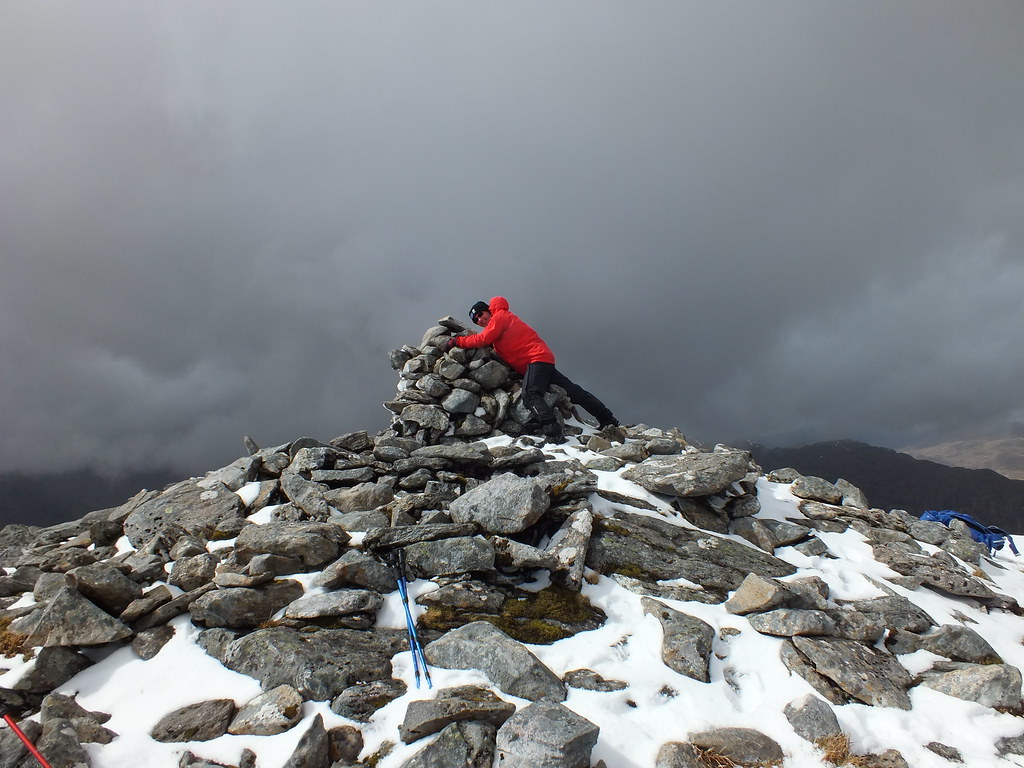 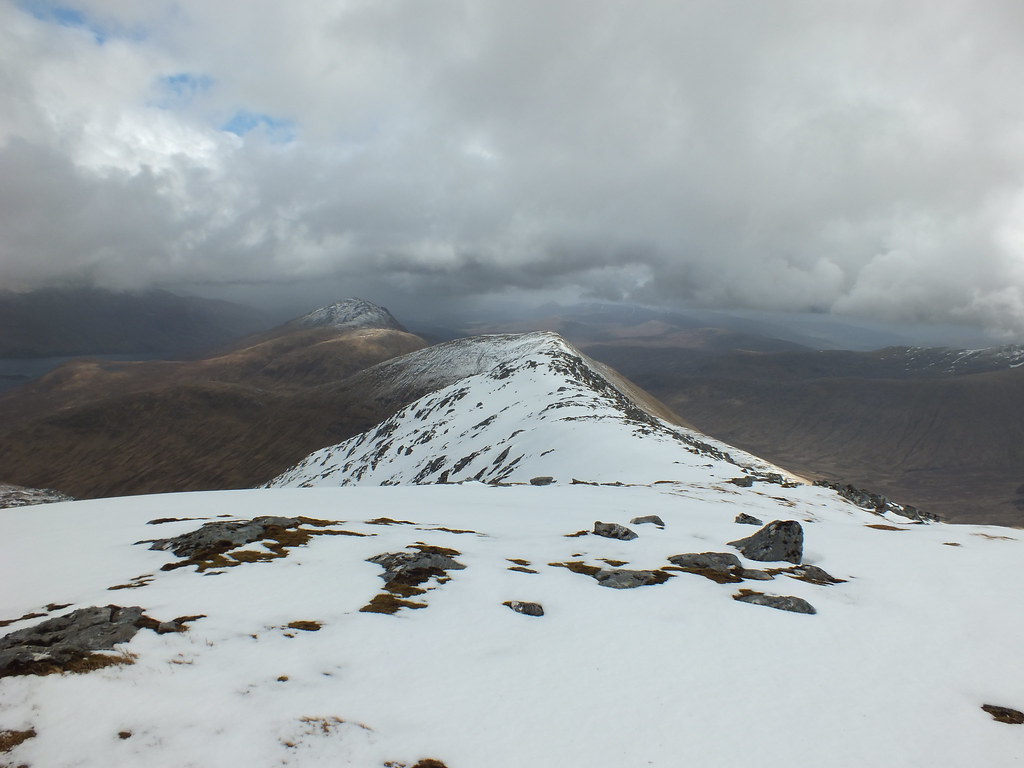 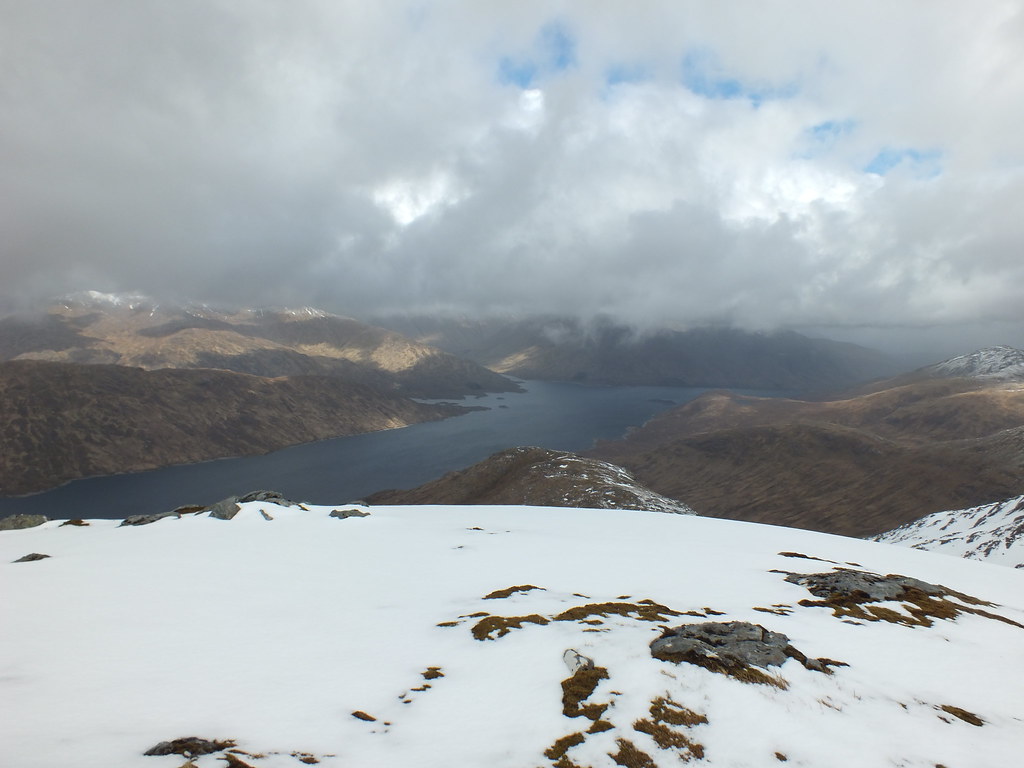 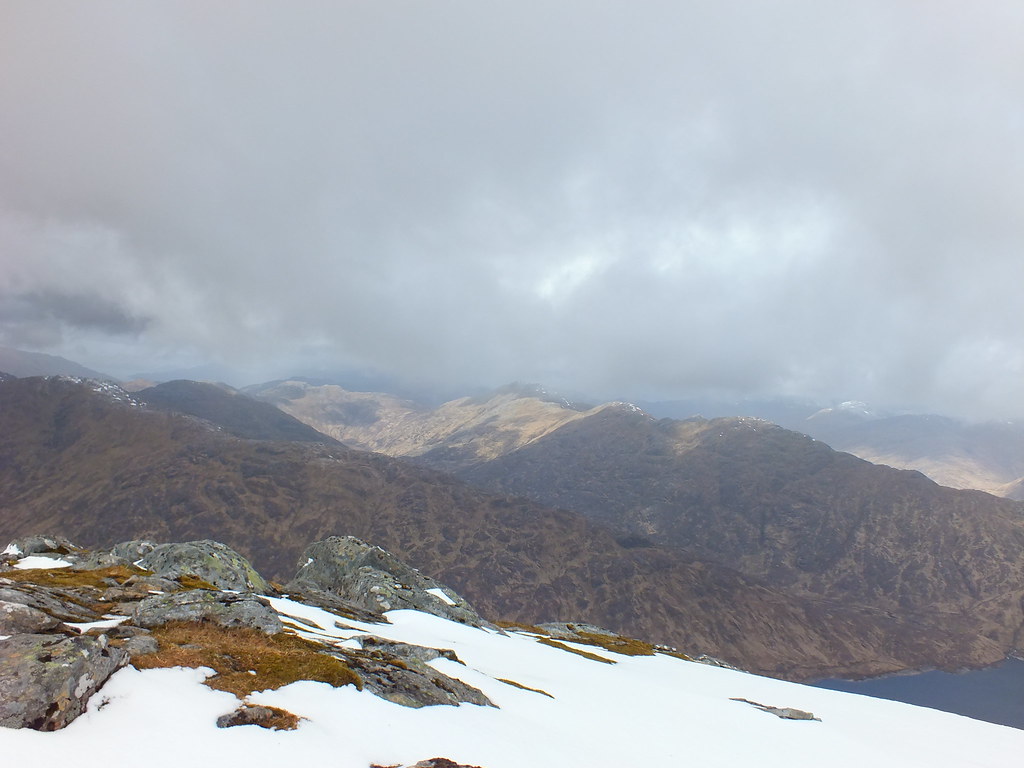 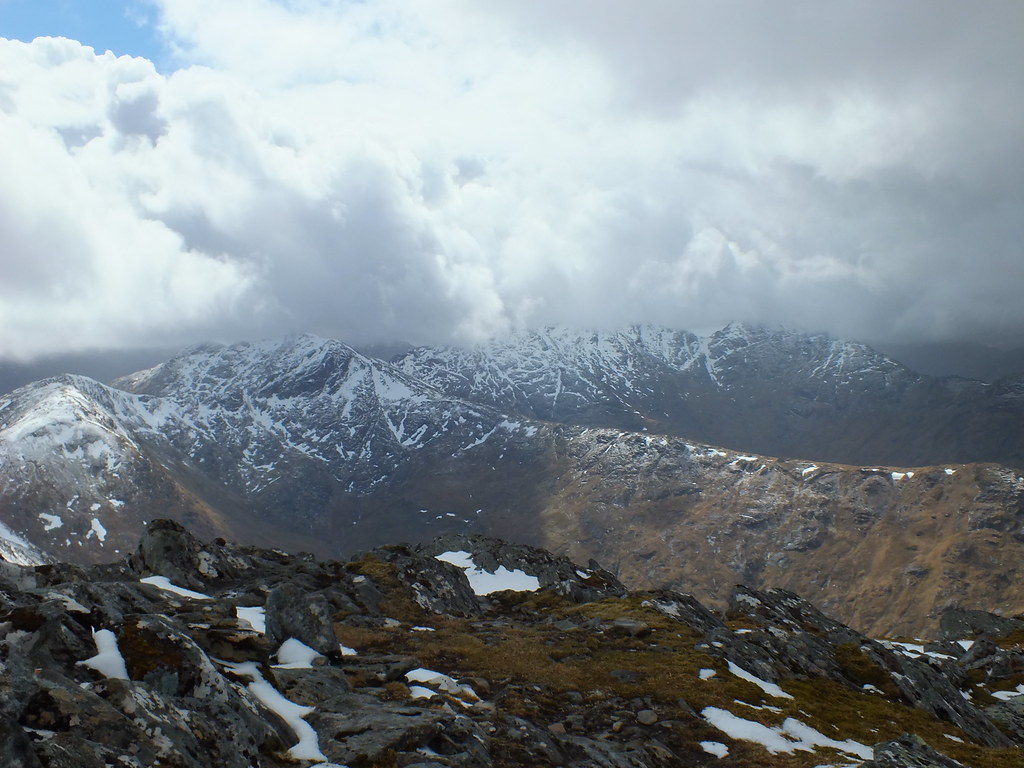 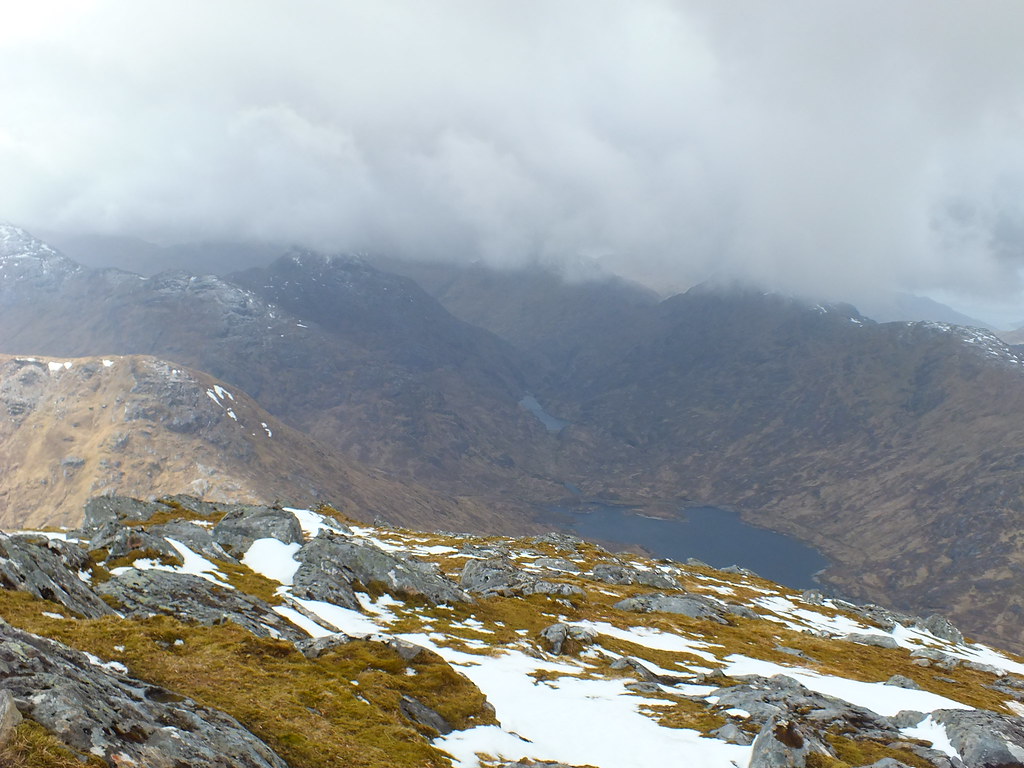 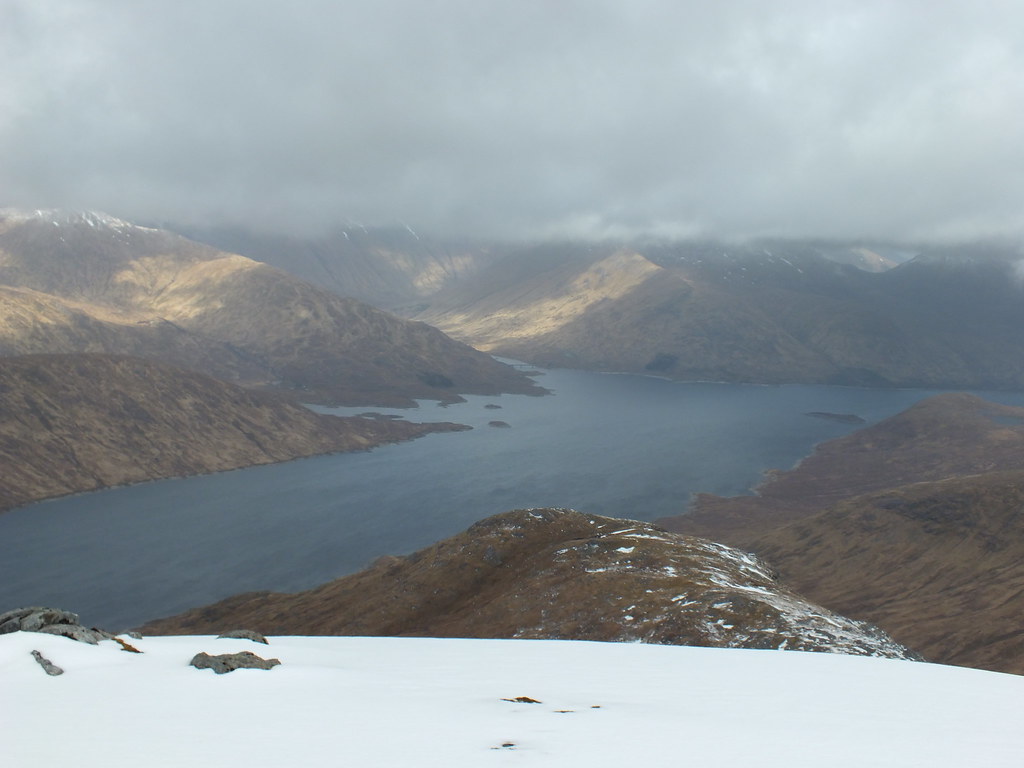 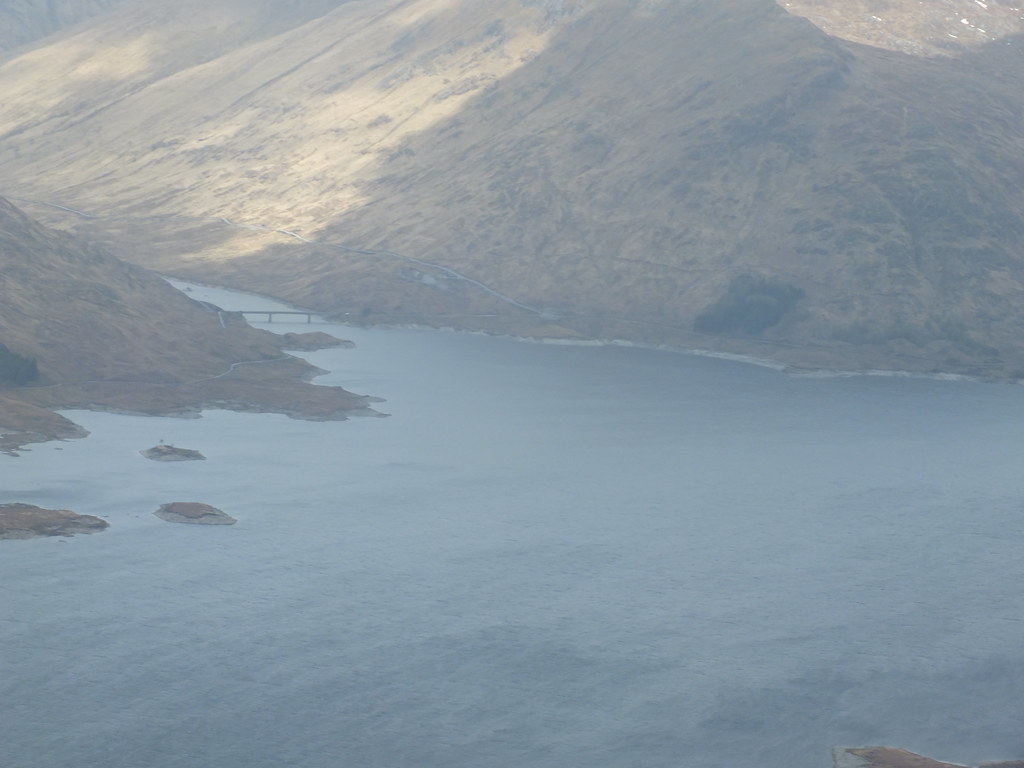 After a few photo's it was time to head down, we had already decided that going up and down Sgurr Beag was not on the agenda, so when we reached the bealach it was time to head down. The descent off Sgurr Mor was pretty rapid and we didn't stop at the bealach we just went for it. We had no idea what lay below, but we knew we could cope with what lay ahead. As things turned out it was really easy and very straight forward, as we reached the lower slopes we decided to traverse a bit to the high end of Glen Kingie. We knew there was no point in saying hello to the river again too soon as there was no chance of crossing. We headed further upstream to where the river splits and this time I went first and it seemed to be fairly easy, maybe most of the water had already gone downstream

All that was left now was the trudge slightly uphill initially then then pick up the boggy path and head downhill back to the main track. 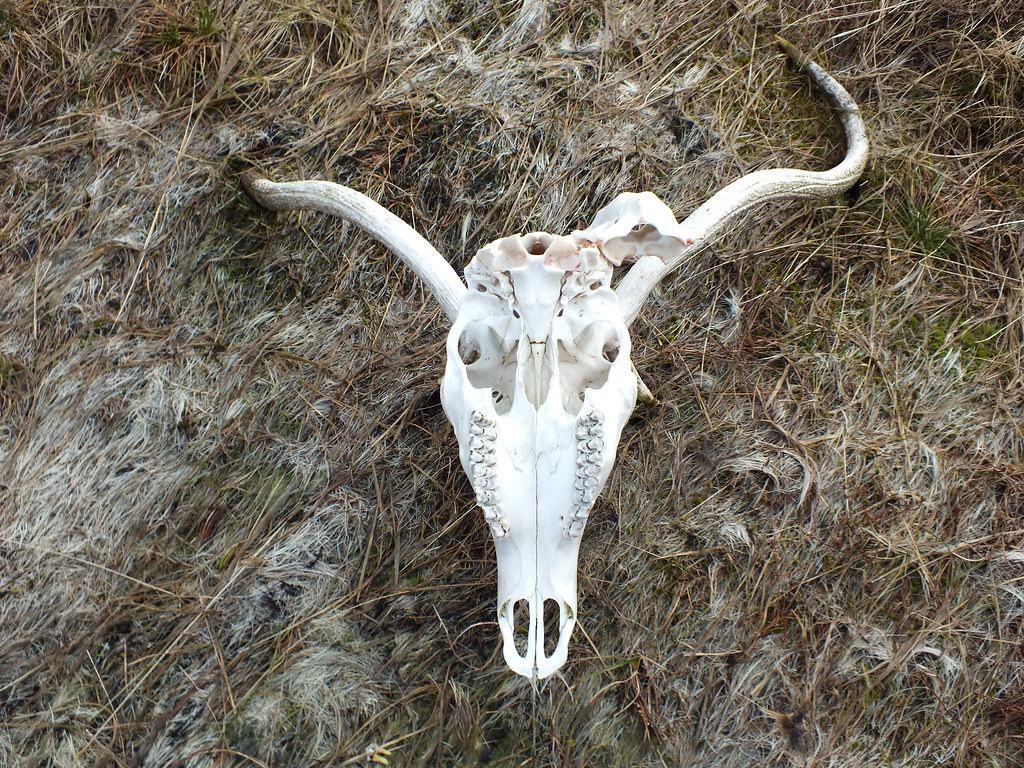 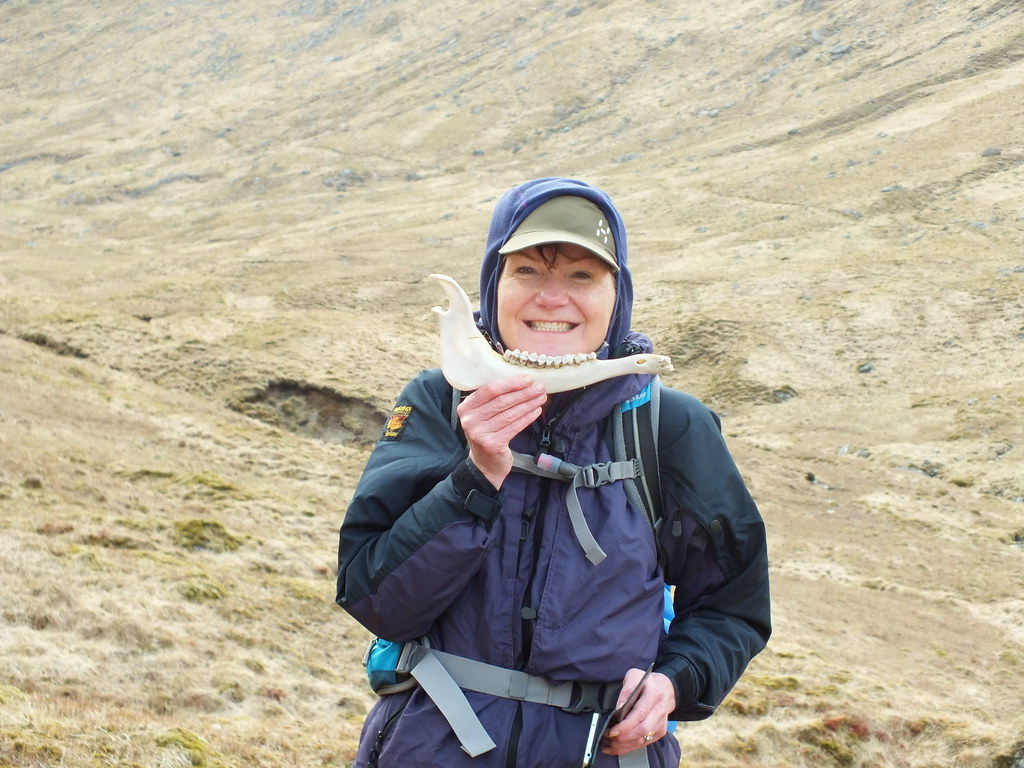 Pauline doing a spot of modelling 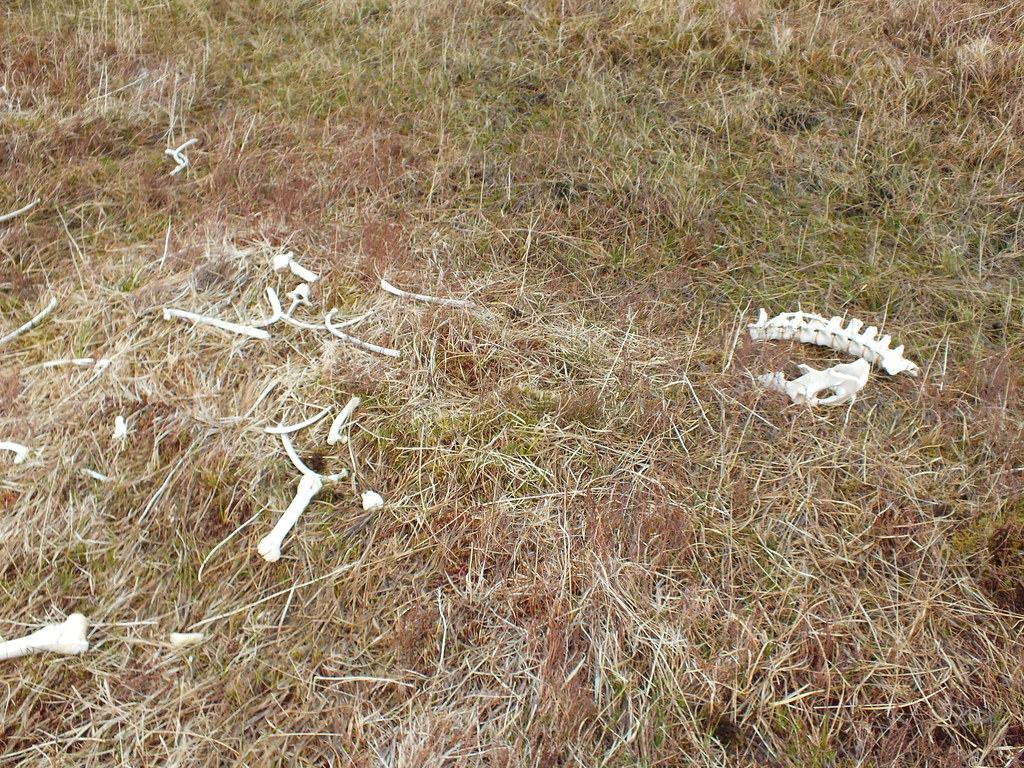 The leftovers of our lunch 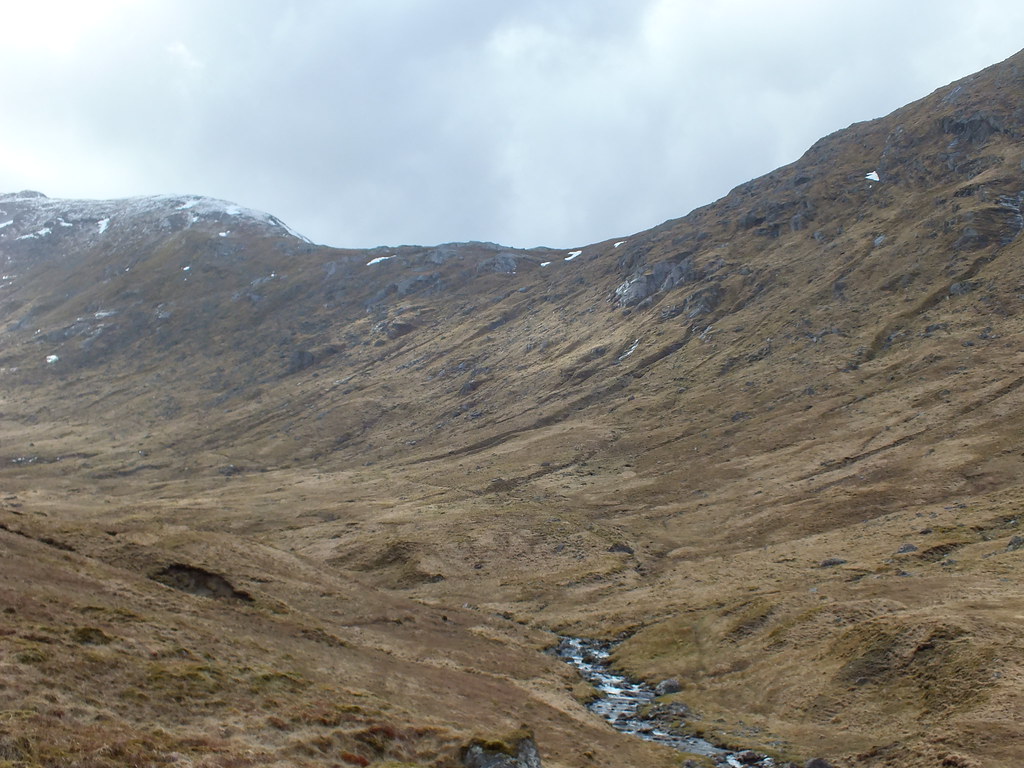 Saying goodbye to the River Kingie 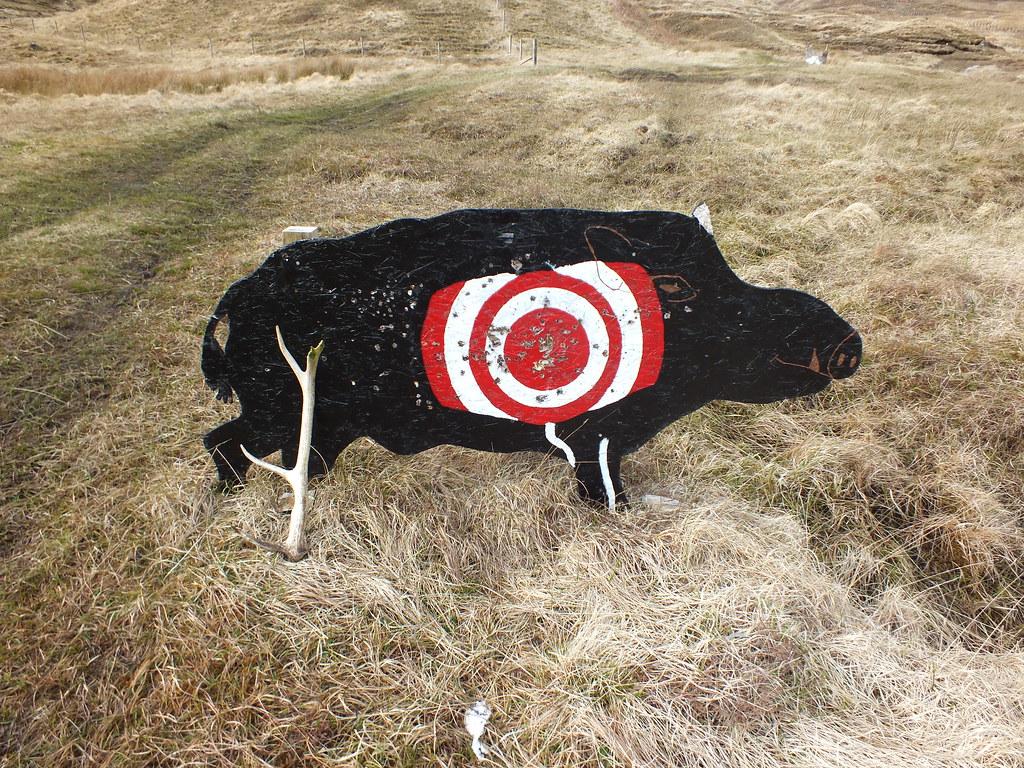 Once back on the track it was then plain sailing back to the car, which was still sitting all alone

The drive back along the road wasn't any easier and we are both looking forward to returning, but it doesn't feature in any immediate plans

Next on the horizon is Mullardoch, unless I nip out before, the plan is progressing nicely

Sometimes it's easier to keep soldiering on when you've got company isn't it...conditions can get you down

Think I'll save that river crossing for a drier time

Least you got some views though!

Martin nearly a week on from that walk and still the pain hasn't diminshed!

Painful though it was, this is a smashing report and shows that our weather was pretty good and the views were excellent!

Thank you so much for taking on the driving and being a great motivator on the hill. Much appreciated!

Roll on the Cheesecake hills and our 3 course meal (or was it 4 course meal?) in Ullapool