So after a beautiful but summitless outing on Sgurr a Bhasteir two days before, (http://www.walkhighlands.co.uk/Forum/viewtopic.php?f=9&t=62328) the second big walk on our program was Sgurr na Banachdich. Again I awoke very early, again very hyperactive and very excited. But also slightly anxious: would we be able to get to the summit this time?
We hadn't planned anything out of the ordinary and just followed the description as given on this website and in the book Munros. The weather again was promising: a lot of short showers of rain and snow, separated by a lot of short spells of sunshine. Perfect for photos, as I do prefer clouded skies over all blue skies. Clouds can be the icing on the cake of landscape photography.
From Sligachan campsite of to the start of the walk; Glenbrittle youthhostel. 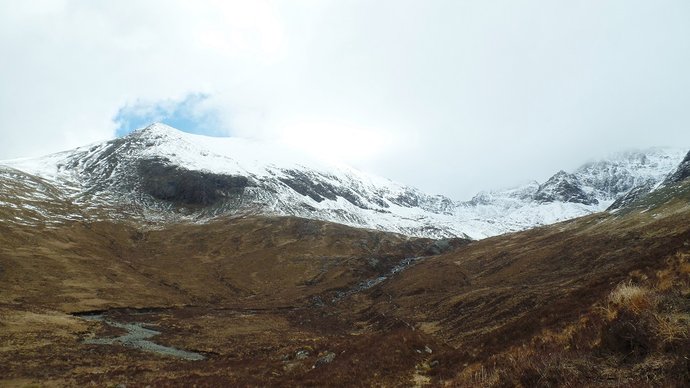 Our first view on the goal of today. Covered in clouds that would soon make way.

From there it's an easy walk over a well laid path, past a beautiful burn. The burn has several nice waterfalls, of which this is one. A very joyous walk.

As predicted, the skies opened up and closed on us again every now and then. The only precipitation that day existed of snow and hail, which I think is preferable to rain.
We continued the walk and made sure we stuck to Allt coir an Eich instead of the Allt a coire Ghreadaidh, to end up at the south side of An Diallaid in the Coir an Eich and to be treated on beautiful views of what was yet to come. 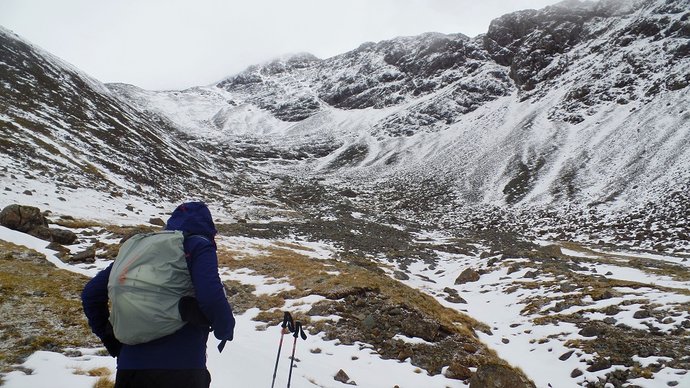 Looking up the Coir an Eich, towards Sgurr na Banachdich

Because of the snow, we couldn't find a path on the ridge of An Diallaid, so straight up the scree slope we went. Quite streneous, but a great experience nonetheless. What a view!!! View to the start of the walk.

And as we got higher, the views only got better. At some point you're up higher than your southernly neighbour Sgurr nan Gobhar. At that moment the views towards what I think is the Isle of Rum open up. 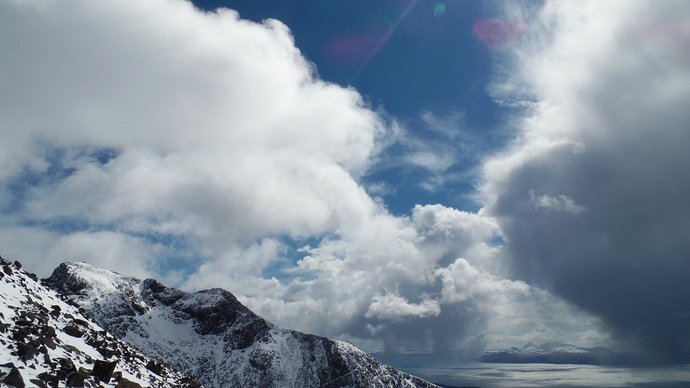 At a certain moment we arrived at some sort of Bealach between Sgurr nan Gobhar and our goal of today, Sgurr na Banachdich. Great place and great moment for a little break, some food and some snow made tea. Arriving at the Bealach Having a break, skies covered up. 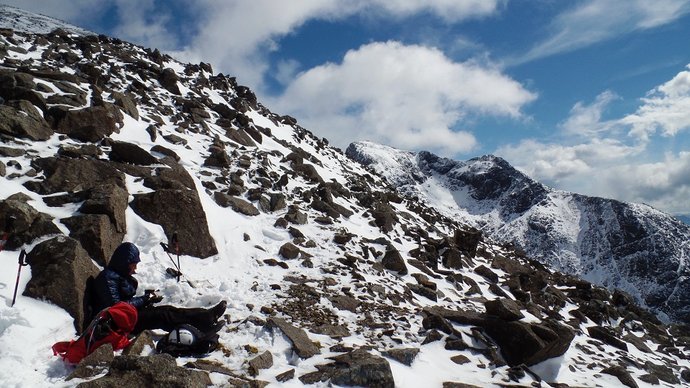 Me enjoying my tea. Oh yeah, and the views of course. Rum (?) in between two showers of rain.

After quite a long break (it was beautiful and suprisingly not too cold to sit still) we moved up towards the summit. At some point on the way there is a see through that gives away just a little bit of what can be expected at the summit. The see through, giving a nice view on what I think are Coir-uisg and Harta Corrie Example of how the weather was extremely changeable.

From there it's only a short walk to the real summit. Once there......well, no words for that. On the summit. Admiration, a selfie and more admiration 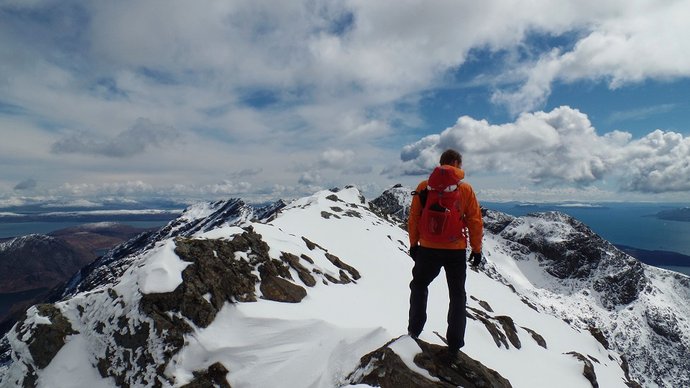 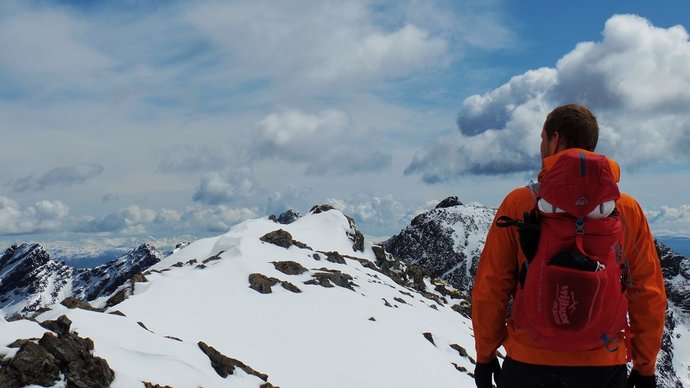 For those of you wondering about the grumpy muppet in the title: take a look at my rucksack here. Didn't do it on purpose, but what has been seen cannot be unseen. One last look before getting in the car again. Sgurr na Banachdich out of the clouds.

Re: Skye again: Sgurr na Banachdich (with a grumpy muppet?)

What fabulous weather in which to experience one of the finest places on the planet! As you say, "no words for that".

Hope to be up there again some time in the next couple of months.....