All too soon holidays come to their end. Bla Bheinn had been on my bucketlist since we first discovered Scotland and this website. Two days before setting of for home again, we were going to finally climb it. The weather had been very diverse the past 8 days since we arrived in Scotland, but overall good. Most precipitation fell as snow or hail (which I don't mind), the rain mostly only fell at nighttime. And no day had been without sun. So we were fully confident this walk was going to be a beauty and a succes as well.

Driving from Broadford towards Elgol, this was our first sight of Bla Bheinn, causing nothing but strenghtened excitement. Getting closer however, the blue turned to a beautiful red of the heather along the perfect path. Finding and following the path is easy enough, so we headed off upwards only to stop for a couple of kodak-moments at the waterfalls along the way. 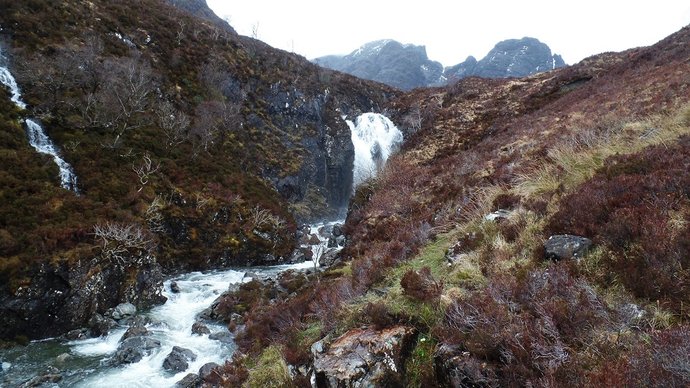 As I said, although the weather has been good on us, it has been raining and snowing a lost over the past days. Allt na Dunaiche was impressively big and it's waterfalls even more.

Because of Allt na Dunaiche being in spate, we couldn't do the regular rivercrossing and we had to head up northeast to find a proper crossing possibility. No hard work in that, just an extreme BOG guarantee.

From there on no problems though in reaching and traversing Coire Uaigneich, a beautiful gorge/gully (?) that reminded me of previous walks in Norway. Sunshine came and sunshine went, as did fog, clouds and hail. The point where to turn right after Coire Uaigneich was not easily chosen, even though the slope was full of paths. Which one is the best one? No need for overthinking though, so up we went. View on An Stac and Loch Fionna-choire. And the mrs making her way up. Hard to capture on a photo what a wonderfully spacious place Fionna-choire is.

We soon gained height and left An Stac well behind us, giving a nice view on the start of the walk and the approach route. On the slopes we were literally attacked by a hailstorm. As all bad weather has done the past days, the attack only lasted some 15 minutes. Offering a nice dramatic shot though. Waiting out the hailstorm. Blurred views on Loch Slapin.

By the time the storm was almost over, we headed further up again, tackling the last bit of the scree and boulder slopes. From there it wouldn't take long before the views on Clach Glas, the Red Hills and the Black Cuillin would open up behind see-throughs. All these views didn't go at the expense of views towards the start of the walk. And it wasn't for long before, after the promised minor scramble, we arrived at the summit. No views whatsoever at arrival, but with our experiences over the past days, we were confident in getting them later on. Summit selfie. Don't hate me for it ;)

And after a while we got what we hoped for. And more. We got a rainbow. From above. Never experienced it, never seen it. Normally I'm no sucker for rainbows, but this one seemed quite special to me. To be honest, I was even a bit surprised and struck by my, maybe slightly childish or naïve thought: if you're above the rainbow, shouldn't it be turned upside down?

What a stunning mountain. Pity to have to leave it behind again. And with a windspeed of about 100 km an hour, I even attempted a panorama. Don't click if you expect a lot:

See you all next year!

Thanks for the photos Jacob , I`m heading here tomorrow from Camasunary - hoping for some sun..........

Nice one Jacob. Bla Bheinn's a lovely mountain and there's definitely something about mountain rainbows.. I'm always confused about how I can be above it

I'd never thought about rainbows being upside down

Glad you did manage to get those wonderful views

We were the same as you getting no views from the top - but in our case it didn't clear.

Some cracking pics there, Jacob. Blaven is one I still have to do, hopefully this year when I'm hoping to do the Cuillin Ridge again, weather permitting.

Lovely, glad you got some views, its an utterly amazing place to be.

Great photos, looks like you had a fine day out there.

If the sun is higher than 42 degrees in the sky, the top of the rainbow's arc will appear below the horizon (the centre of the rainbow's arc is always directly opposite the sun), in which case you can only see a rainbow if the you are higher than the raindrops refracting the sunlight back to you. It is possible to see the entire circle, more easily from the air than from a mountain (see http://i.dailymail.co.uk/i/pix/2014/10/11/1413004153578_wps_15_PIC_BY_BIRDSEYE_VIEW_AERI.jpg )

Thanks at everyone, with a special mentioning of jmarkb, for I can always appreciate some science

Stefen should be up there right now and Alteknacker: I do hope you get to it this year. Waiting for your report.

Great result, just a pity about the clag at the top - still, you saw a lot more than me

jacob wrote:To be honest, I was even a bit surprised and struck by my, maybe slightly childish or naïve thought: if you're above the rainbow, shouldn't it be turned upside down?

Cracking report and pics Jacob. A Mountain very much on my to-do list in the near future

If you do ever see an "upside down rainbow" then it will most likely be a circumzenithal arc: http://www.atoptics.co.uk/halo/cza.htm