Torridon, what a place.....it has everything! I've been here twice before, the first time was to do a recce for my mate who was doing the Celtman Ironman. I had planned to do Beinn Eighe (the high route in Celtman), got as far as the first cairn on the ridge and had to abandon the idea of traversing the ridge due to high winds throwing me about ! A hasty retreat was called for, and the top was so close! The second trip was as the support runner with my mate, perfect weather conditions for the Celtman race....and to climb Beinn Eighe! Unfortunately he just missed out on doing the high route in the race, but we still had a pleasant run through Coire Dubh Mor with splendid views of the Torridon 6, as we made our way back to the village....another trip was called for!

This time I decided to join a SYHA activity trip. The schedule was to try to do the 6 Munros in 3 days. Unfortunately the weather forecast for the trip was poor. Gales, rain, snow....it seemed the place was locked in Winter and it was beginning of May. Still, it was decided by the guide we would do Beinn Eighe as a gentle 'intro'.

We started at the car park (976579) to Beinn Eighe in non-favourable conditions. I'd been here before in my first trip...could I handle another failed attempt ! I had driven past it the day before and was surprised to see so much snow at the top. The decision was made not to take crampons. After about 500m slowly climbing up the path to the ridge towards Spidean Coire nan Clach, the first Munro, we hit the snow line. Given that the path further ahead was covered in deep snow we discussed the best way to approach it. The decision was to take a line towards the 2nd cairn to the right of the Coire. Making the most of the last solid ground

We made our way slowly up making our line through the snow. The snow was still soft so it was still reasonably good walking conditions. 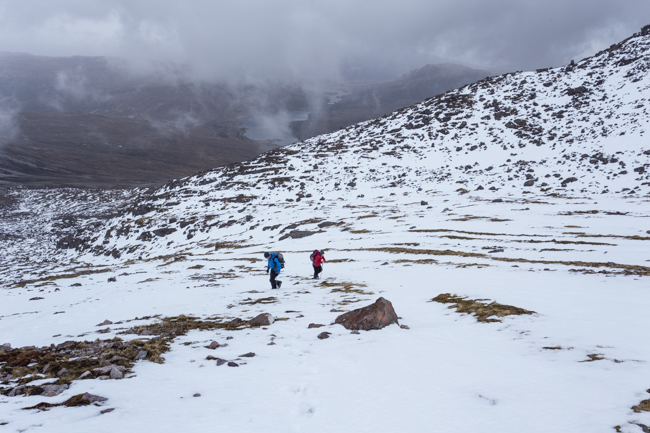 Walking up the coire

As we got steeper, so did the snow. Kicking in steps was still achievable and crampons weren't required. There were a few 'dodgy' bits near the top where the snow hardened where due care and attention was required. We were lucky we could still make good progress without crampons. A wee way to go

The line we took meant we missed the first cairn at the top of the summer track, but came to the 2nd cairn dead on. Visibility was poor and the wind was howling.....again I thought not again! Neil and myself put on our thermal jackets to wait for the others in the group to arrive. It was freezing! When they approached, the clouds started to part! Perfect timing....could the weather be breaking up? With the gales, and the conditions they were I again had my doubts of reaching the top. The last 100m or so from the 2nd cairn to the top of Spidean Coire nan Clach looked tricky with a touch of scrambling. Ian, our guide provided the encouragement to plod along and reach the top. It looked worse than it was. He led and checked the scramble section was still safe enough to do. He found a safe route, and we followed...one tricky step and a hoy up and the top was there....and the clouds continued to part! A seat with a view! 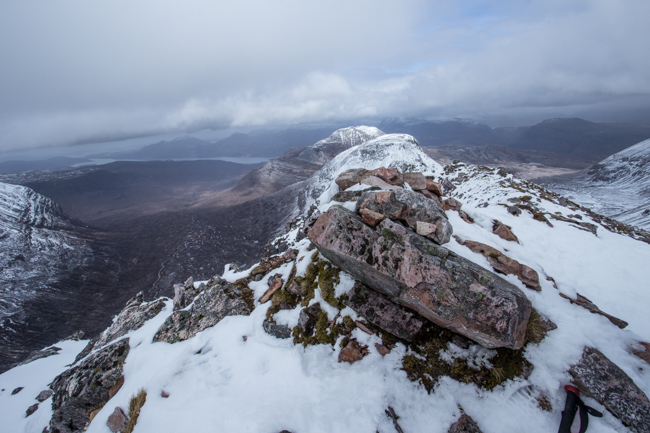 What a view, we could see the ridge ahead of us, and the mighty Liathach ! The wind dropped considerably...I couldn't believe my luck. After 10 mins of sucking up the atmosphere we headed back down to the cairn, and started to make our way along the ridge.

All along the route we were blessed with the wonder of Torridon...the way the light hits the mountains as stormy clouds roll past. Liathach was for ever dominant in front of us and showed off its pinnacles in full glory! That would be another day! Today was my Beinn Eighe day! Heading off the summit 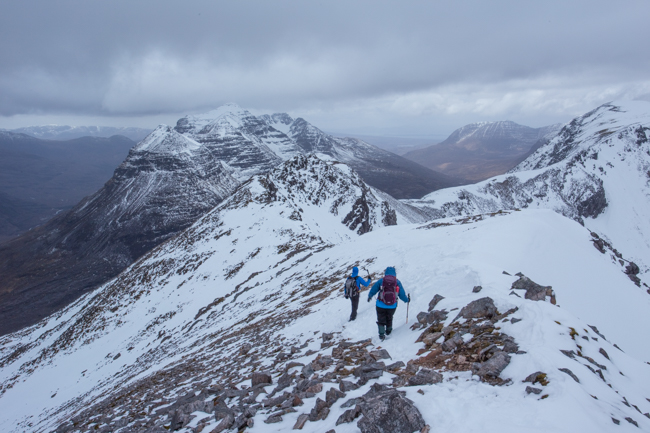 Starting along the ridge 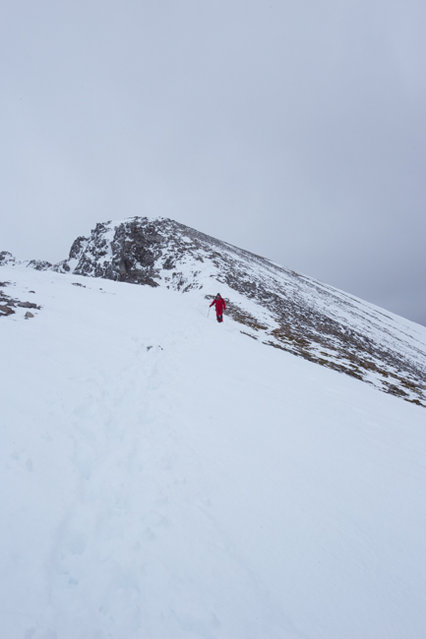 I mean you sometimes just have to stop to take it all on! 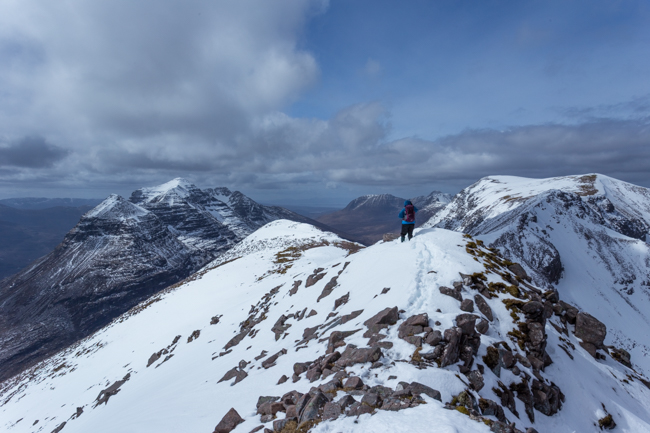 The ridge itself was easy going. Myself and Neil headed off to climb the 2nd Munro Ruadh-Stac Mor and the rest would meet us at the gully descent. 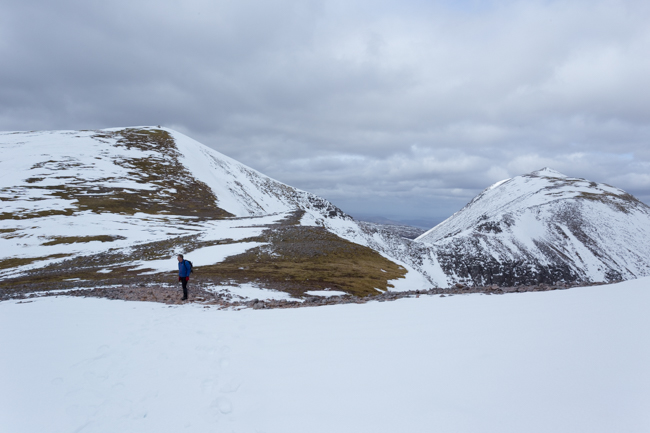 Ruadh-Stac Mor in the distance

The descent off Coinneach Mhor towards the gully was steep and knee wobbling without crampons! The snow was compact and one slip would mean a long fall off the Triple Buttress. Luckily Neil had provided some if what small steps to slowly kick heels into. I made my way off it slowly. We had a look at the gully and thought..."Jeez....." as we made our way up Ruadh-stac Mor. The 2nd munro was easy and I reckon done in 1/2 hour. It was blowly. With no hanging about, we made our way back to the bealach to start our descent into the gully. Joanne and Ian had already got a good way down the descent. I just looked at it and my first thought was.....we're not going down there ??? Neil started...I was the last. Apologies for the blurry picture below but I was shaking a wee bit Looking down the gully

The snow was still soft in the gully, so I decided the best approach was to down climb. Normally I would use my axe as support but as we had no winter gear I made do with my poles.I think the better approach was to use one pole instead of two, as I needed one hand to punch into the snow. Both poles just kept getting in the way. It was a long way down to fall! After what seemed like an eternity and "don't look down!" I made it down and joined the group at the bottom of the gully. I was glad to be on reasonably flat ground again into Coire Mhic Fhearchair 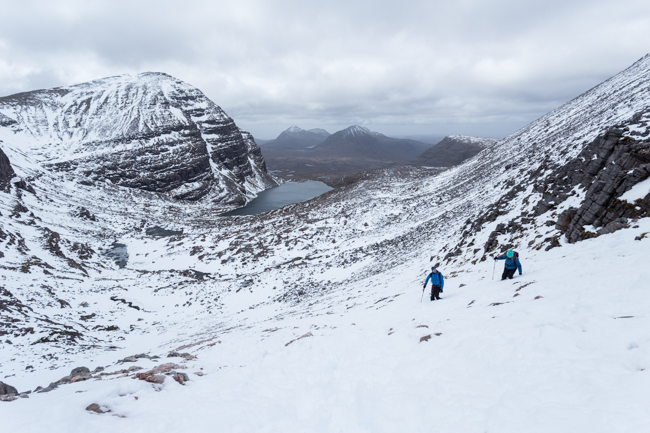 The last section was across the boulder field. We had a break at the Loch and looked at the splendour of the Triple Buttress. The plod back to the car park was along an easy path. The weather started to turn again and the rains came...but I didn't care....Beinn Eighe was beaten this time ! What a day!

What a wonderful place! Especially with the "icing on the cake". We had a go last weekend but one, climbing up to the ridge via Coir Mhic Fearchair. But the wind was really fierce on the ridge, and it wasn't a sensible place for people with limited winter experience to linger (patches of snow thigh deep combined with the wind made it really quite challenging).

We glissaded down the gulley, which was pretty straightforward; but the boulder field proved a bit of a challenge - ie took rather a long time.

Yeah, it does get blowy up there! Always best to turn around it conditions arnt suitable for the group. I found the boulder field deceptive. You got to carve your route through it to get to the Loch. I think it took about 1 hr for us. I think the alternative is to stay high around the coire and contour around the right of the loch and descend down. Either way, its a concentration effort.