Wilderness Camping in the Fisherfield Forest

Wilderness Camping in the Fisherfield Forest


Four of us from the Gay Outdoor Club's Adventure Out group had rendezvoused at Corrie Hall at 4pm the previous day for the six-mile walk to Shenavall Bothy. Although it was the end of April, winter conditions prevailed with significant snow on the hills. The weight of our packs ranged from 13.5 to 18.5kg - not surprising considering we were carrying ice-axes and crampons, as well as camping gear and food for three days.

It was a fine spring evening as we crossed the 450m bealach (pass) on the south side of An Teallach – one of the most iconic of Scottish mountains with its rocky pinnacles and breathtakingly exposed ridge. As we came over the pass the equally dramatic and seemingly unclimbable Beinn Dearg Mor and Beinn Dearg Beag could be seen. After a boggy section – a taste of things to come – there was a steep and rocky descent beside a burn, until the bothy suddenly came into view only a few hundred metres away.

A smoking chimney indicated that others were already in occupation and, sure enough, there was a group of three walkers who welcomed us with the offer of a wee dram from a hip flask. After pitching our tents just outside the bothy, we went back inside to spend the rest of the evening cooking and eating. The fifth member of our party arrived at 9.30pm, just as it was getting dark and the rest of us were about to retire to our tents. We fell asleep to the eery sound of the whirring flight of snipe.

The forecast for Saturday was promising, so the five of us set out at 8.15am, hoping to complete at least some of the famous Fisherfield Six - a group of hills consisting of five Munros (over 3000 feet) and one Corbett (between 2500 and 3000 feet). The latter was classed as a Munro until recently when a new survey showed that it was just under 3000 feet.

Before we could reach any of the hills, however, we had some obstacles to overcome starting with the Abhainn (River) Srath na Sealga, just five minutes out from the bothy. There was no bridge or stepping stones, so we had to wade through the knee-deep water. Two of the group changed into trainers to avoid getting their boots and walking socks wet; the rest of us later wished we’d done the same. This was followed by a mile of boggy morass, then another river - the Abhainn Gleann na Muice - which was just as deep and just as wet.

Reaching the first peak, Ruadh Stac Mor (918m), involved a steep climb on snow using ice-axes. One of the group, who was feeling unwell, had already turned back an hour earlier, but the process of attrition now increased with two people deciding that one hill out of six was enough for that day.

To reach the bealach before the next peak - A Mhaighdean (967m) - the remaining two of us had to find a route down through an almost unbroken line of crags. A steep snow gully seemed to be the best option and by turning our faces to the slope and using our ice-axes, we managed to descend without too much difficulty.

A Mhaighdean is reputed to be the most remote mountain in Britain in terms of distance from a road. As we came up on to the ridge, cloud obscured the view and we had to take a compass bearing to check our direction. Luckily there was a break in the cloud while we were on the summit, giving us spectacular views of mountains and sea to the west.

By the time we got down to the next bealach, it was 3.30pm and we’d been out for more than seven hours, having completed just two of the Fisherfield Six. This was not surprising, as the Walk Highlands guide reckons 12-18 hours for the whole circuit and soft snow was impeding progress. At this point there was 15 minutes of heart-searching, before one of us decided to descend and the other to continue and try to complete the remaining three Munros.

Your humble author, true to the principle that discretion is the better part of valour, headed down the valley to take the easiest route back to the bothy. This was still three hours’ walk in rough, pathless country, with the ground becoming more saturated as the weather deteriorated. The thought of having to cross back over the two rivers was a daunting prospect and indeed proved to be unpleasant as the water had not only got deeper but also become twice as wet.

The other person eventually returned at 11pm – nearly 15 hours after setting out - having completed two of the three remaining Munros: Beinn Tarsuinn (937m) and Mullach Coire Mhic Fhearchair (1019m). This was all good practice for an expedition he was due to join the following week to climb an unconquered peak in the Indian Himalaya.

The forecast for the following day was not so good. With three out of four of us now having sodden boots, a collective decision was made to walk back to the cars and find accommodation offering a hot shower and drying facilities. 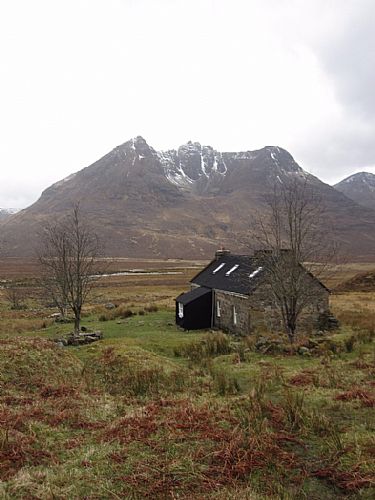 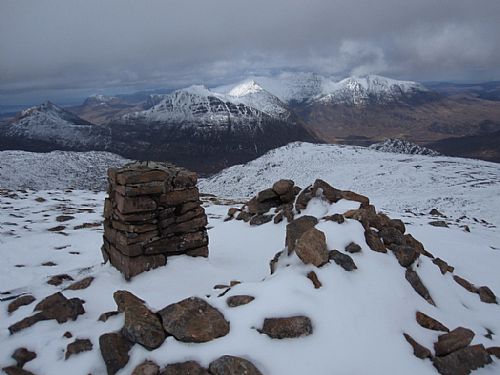 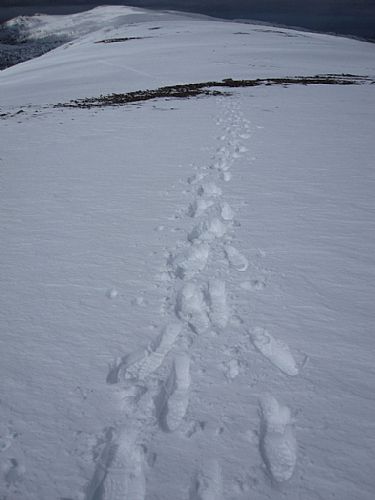 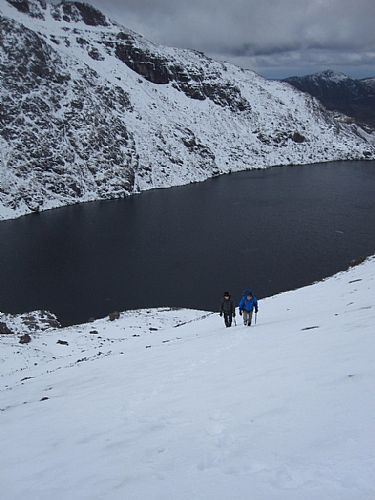 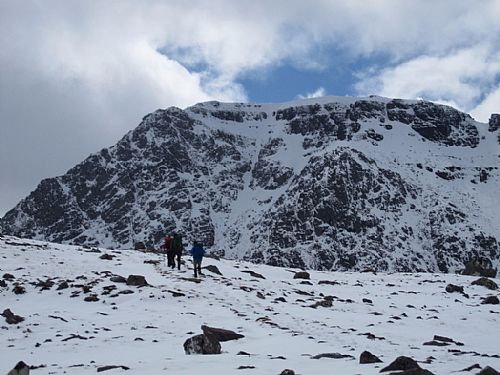 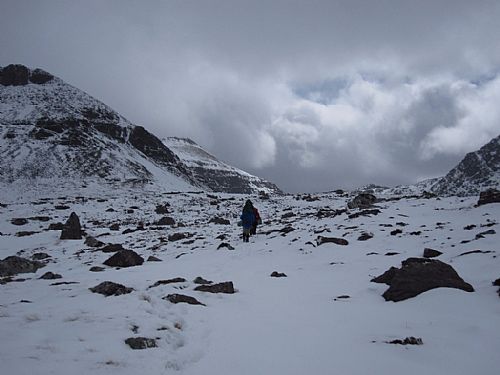 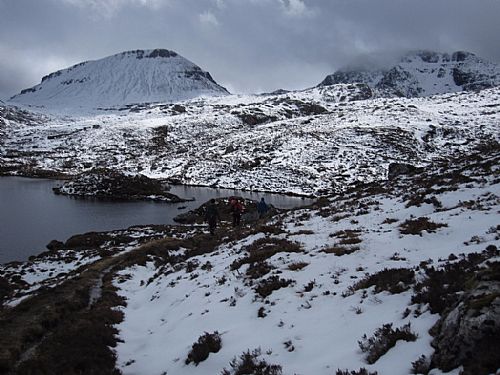 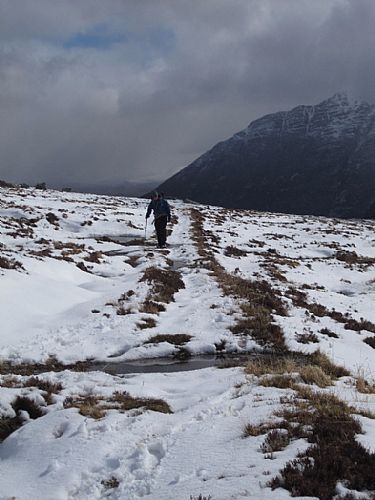 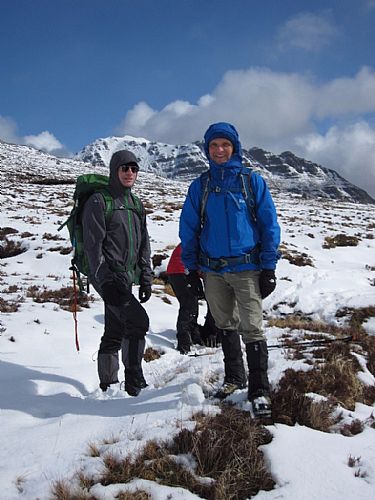 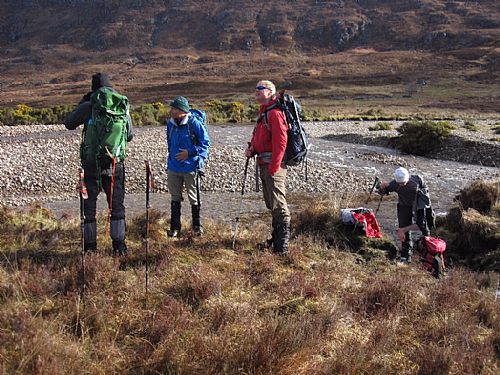 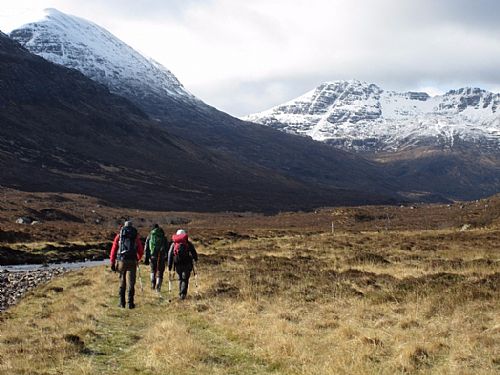 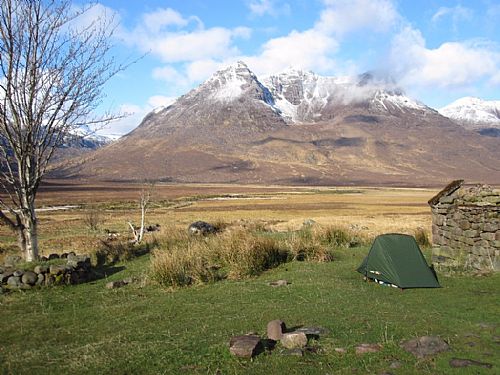 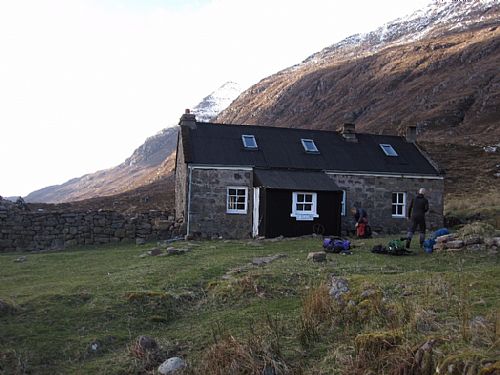 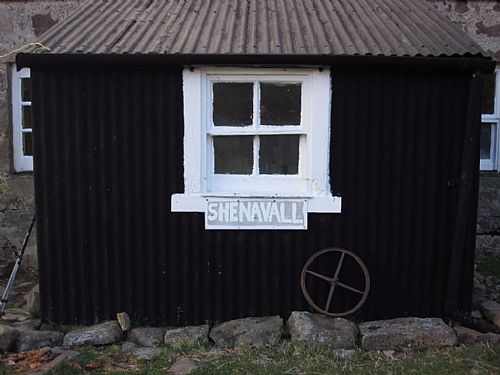 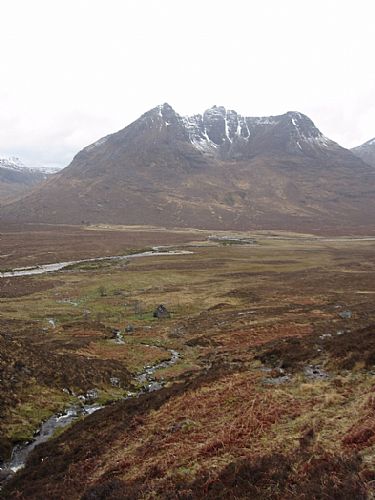 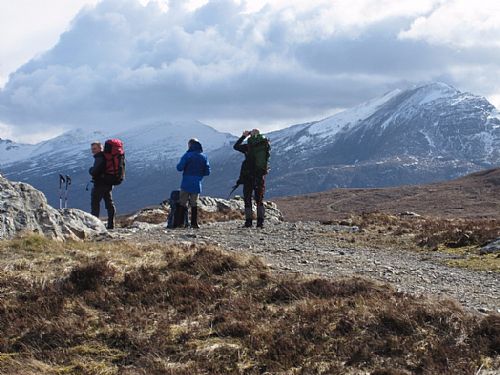 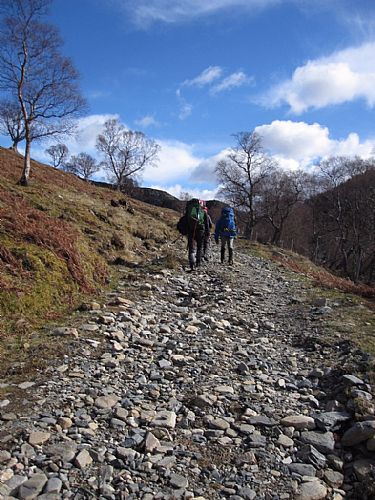