Had planned to head north west but Saturday’s forecast for Sunday looked better in the east so decided on Pitlochry. Started raining just before leaving the house but only lasted about half the way. Around Perth one overhead sign announced road closures near Pitlochry for a cycling event - then the next one explained that there was no exit from the A9 into Pitlochry. Later discovered the Etape Caledonia Cycle Challenge was taking place.

Left the A9 at Birnham then detoured through Dunkeld and Blairgowrie. Downside was that it added quite a lot of time due to the extra distance and having to slow down for the many birds wandering along the road. Upside was that notwithstanding having to stop for them, two separate red squirrels and a hind crossed the road just in front of the car - they always seem to wait until you’re just about level with them before they decide to cross.

Arrived at the end of the road to Glenfernate. There was some space beside some bins but that was just the other side of a private sign so drove a bit further on and parked in a layby just to the west of the bridge at NO050639.

Got the bike out the car, kitted up and cycled back to the start of the private road. Tarmac all the way to Daldhu albeit that the surface got rougher the further north it went.

Once past Daldhu the tarmac stopped and became a landrover track which was pretty rough in places with a fair bit of ascent/descent. Passed a few campers here and there.

Stopped beside some ruins which are marked on the map (was half expecting more of a building though). Locked the bike and started up the hillside.

Already at about 450m which just left around another 450m to the summit. Some rain on and off on the ascent but no point in putting on waterproofs as it was already very warm.

Straightforward walk to the summit - no need at all for the ice axe........... It was extremely hazy so could see very little in the distance.

Ruins near where the bike was locked up

Cairn on the hill to the east of the tarmac road

Vuirich_active.gpx Open full screen  NB: Walkhighlands is not responsible for the accuracy of gpx files in users posts

Had some very early lunch then drove to the car park in the trees just north of Moulin - managed to get the last space.

Now getting very hot and no sign of any snow so left the ice axe in the car. Off up the signposted path which leads directly from the car park.

Good path all the way - does get steeper nearer the top. Did have some trouble with cramp just above my right knee probably due to the heat - nothing that a handful of salted peanuts couldn’t fix though 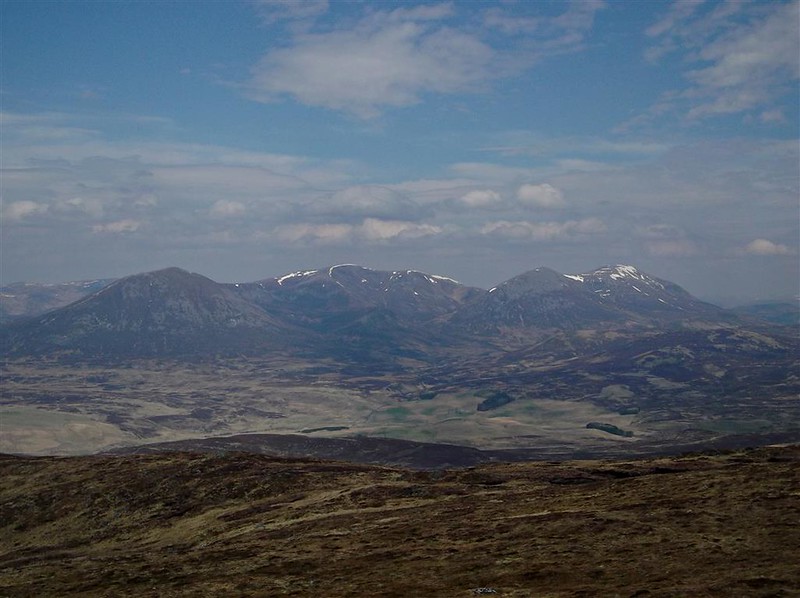 Quite breezy at the top but not cold. Stopped for a brief chat with another walker from England before heading back down the same way.

Got detoured in Pitlochry and had to head north to get on to the A9 - hadn’t take as long as thought and was home in plenty of time for dinner.

Nice one Rockhopper, I'm heading to Pitlochry at the end of the month and Ben Vrackie is on the to do list so it's good to get a preview before we go, looks straightforward with quality views.

Looks like I could possibly drag my wife or, indeed, myself up Ben Vrackie. Been in Pitlochry a couple of times to visit Glacier Books but never climbed any of the nearby hills.