Beinn Dubhcraig and Ben Oss.gpx Open full screen  NB: Walkhighlands is not responsible for the accuracy of gpx files in users posts

The forecast last week looked too good to resist, so I booked a few days off and decided to knock off a few nearby hills. First up, Ben Oss and Beinn Dubhcraig from Dalrigh.

Pulled into the car park at about 9am just as a couple of guys were setting off. I thought that was the last I'd see of them, as I was planning for a nice, easy day on the hills to take full advantage of the weather...and I'm not the fastest at the best of times. From the car park take a left and head for the bridge over the nice picturesque bridge over the river. 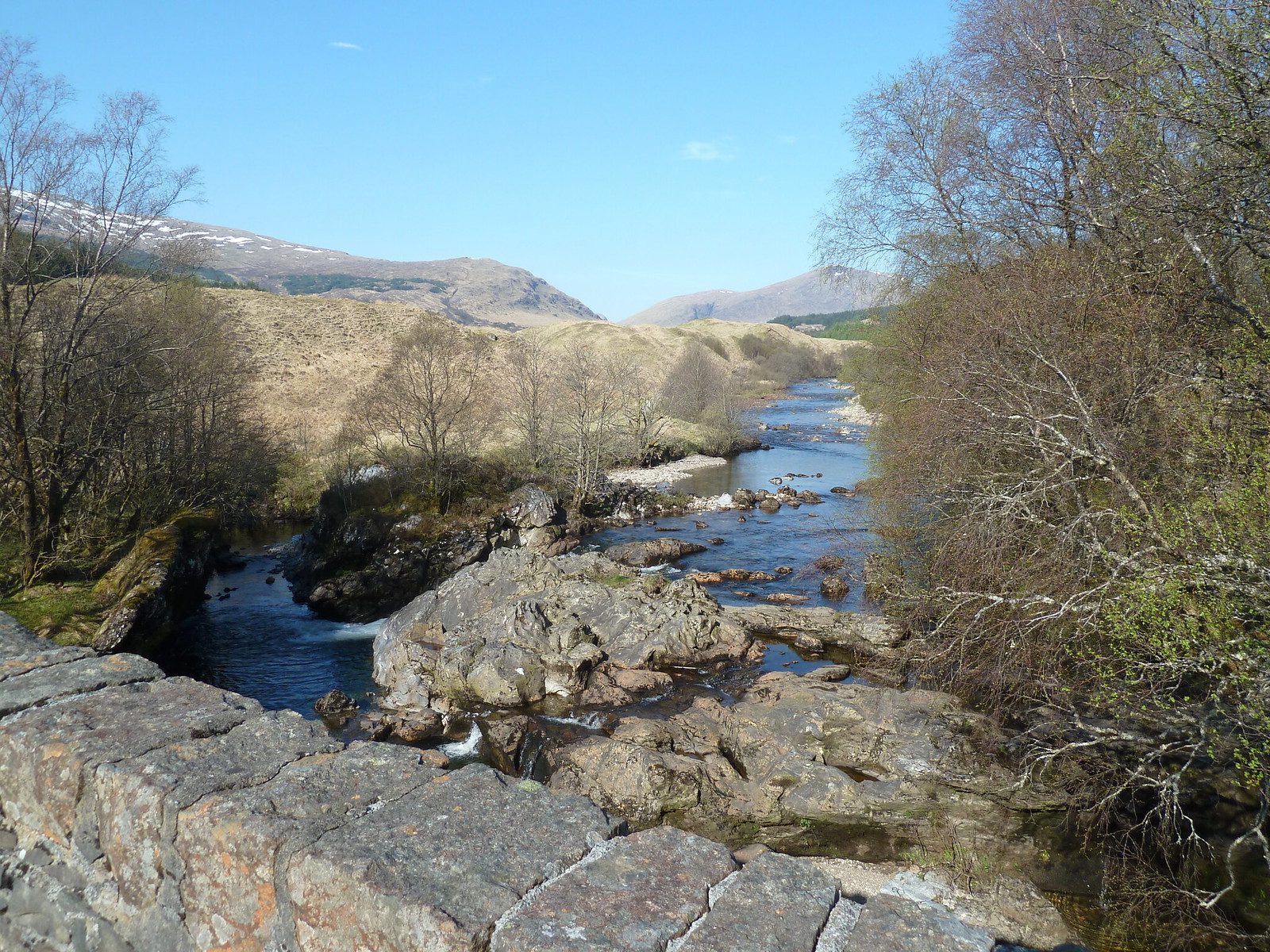 View from the bridge over the river

Once over the river follow the track gently uphill towards the railway crossing. 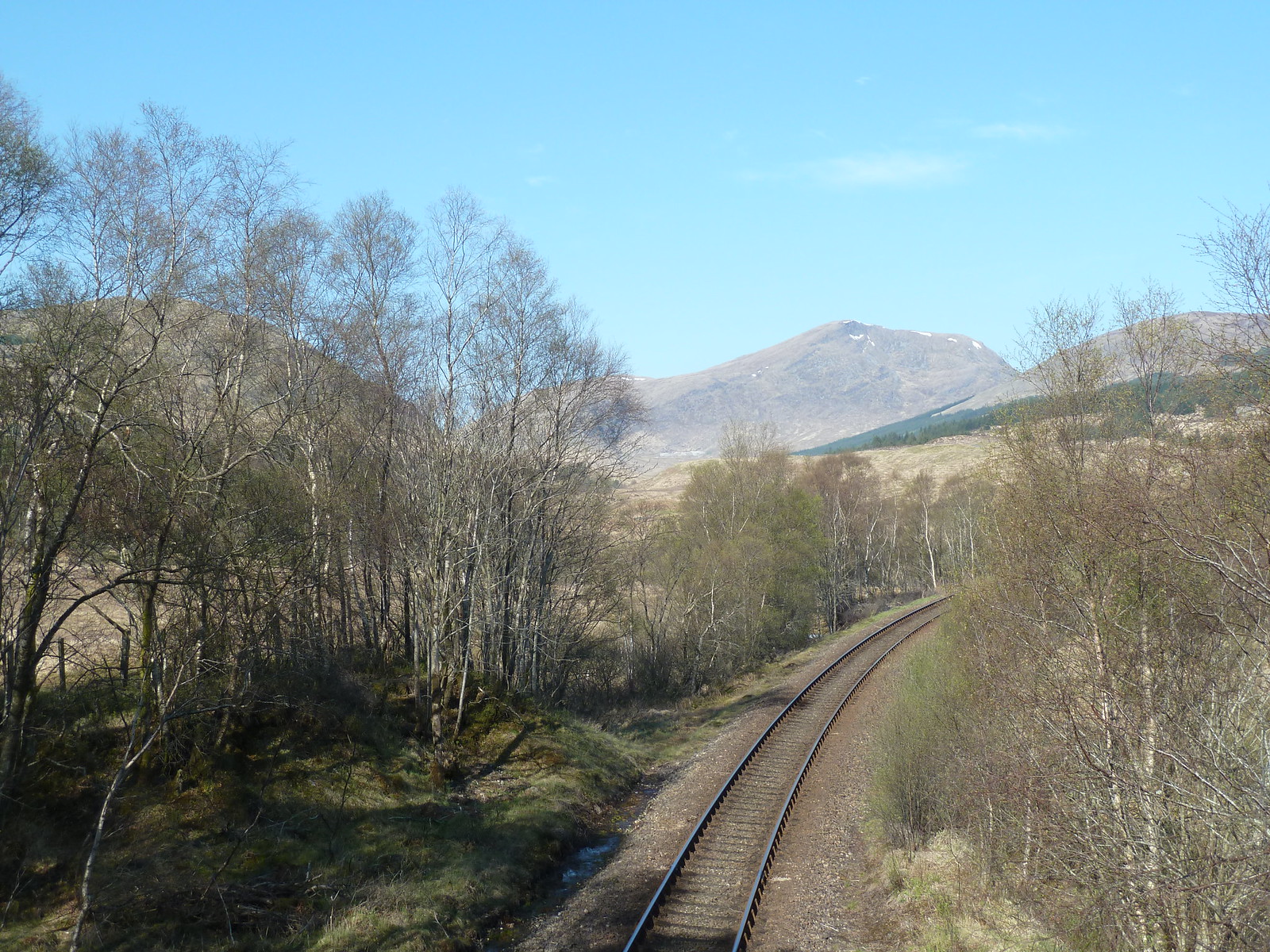 View from the bridge over the railway

As mentioned on this site, the footbridge over the Allt Gleann Auchreoch is down. There are also notices up to this effect, so once over the railway bridge, carry straight on to follow a track that gently climbs towards an area of woodland, with your first proper view of Beinn Dubhcraig straight ahead on the other side. 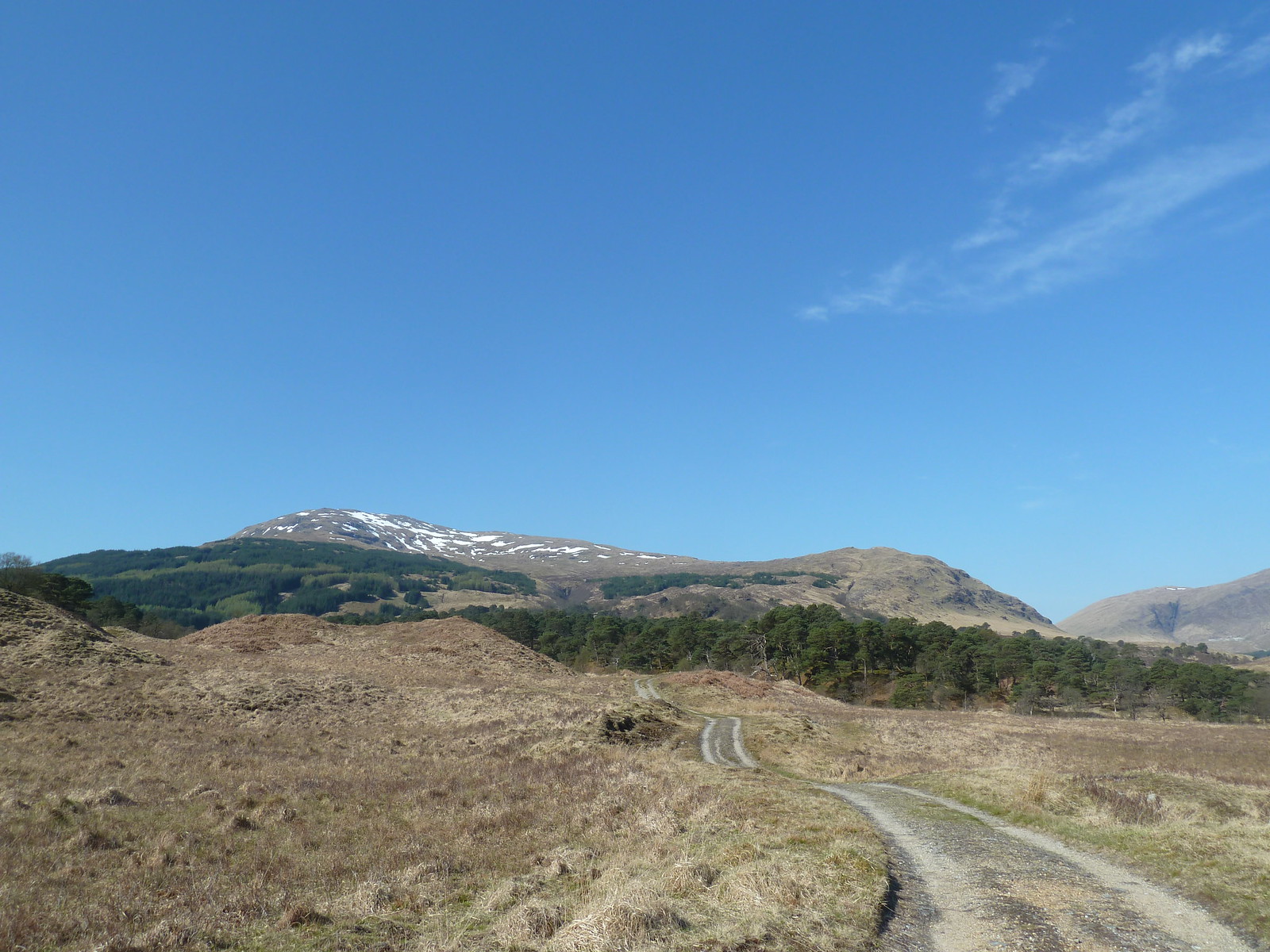 Beinn Dubhcraig beyond the forest

The track soon enters some very pleasant woodland - Coille Coire Chuilc. You still have the problem of crossing the river though, so look out on the right side of the track for a small cairn marking the spot where you can easily cross. 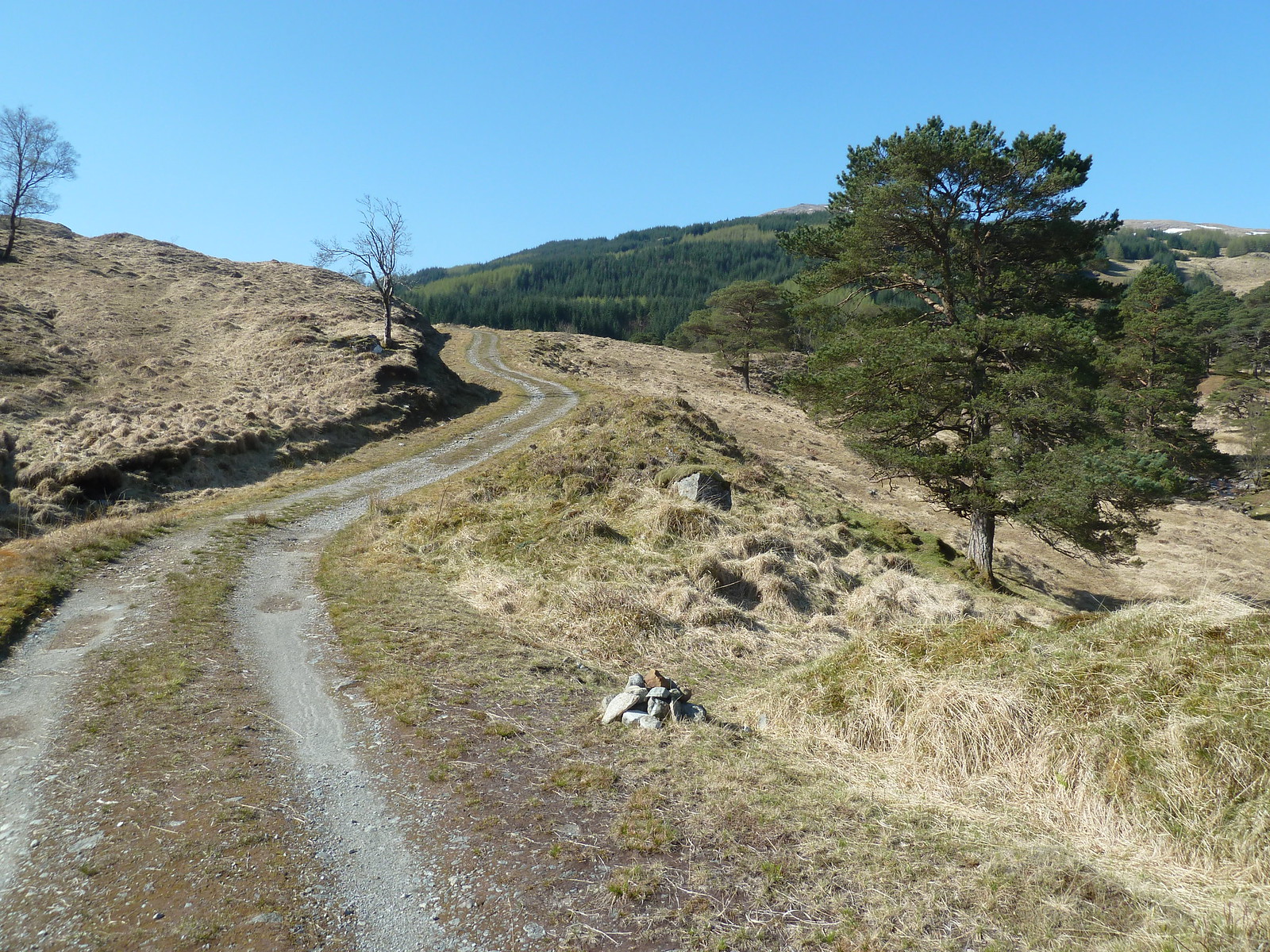 Head off to the right down towards the stream. On the OS Explorer map there is a footbridge marked, but I never saw it - not that I bothered looking because there were plenty of easy crossing points that involved just the usual hopping over some stones.

I sat by the river for a minute or two to take in the lovely view, and was soon joined by the pair who had left the car park before me...they'd missed the turn off and had had to double back. We exchanged a few pleasantries and they were off again. 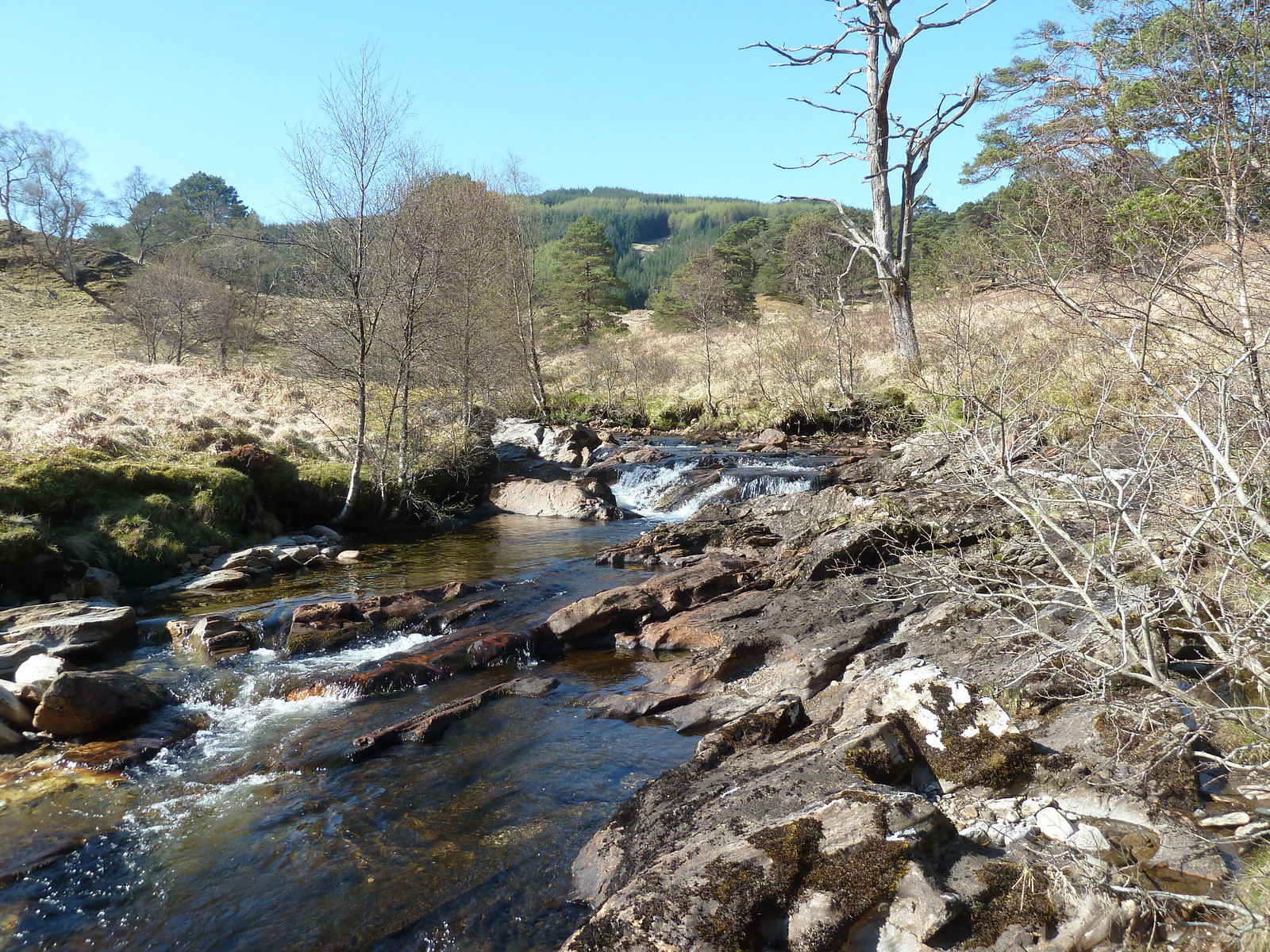 Once over this stream, the next job is to find the Allt Coire Dubhcraig as following this takes you almost all the way up the mountain. There was no obvious path from my crossing point, so I just wandered off in a westerly direction, enjoying the light and airy woodland...so different from the dark pine plantations we hillwalkers normally find ourselves trudging through. 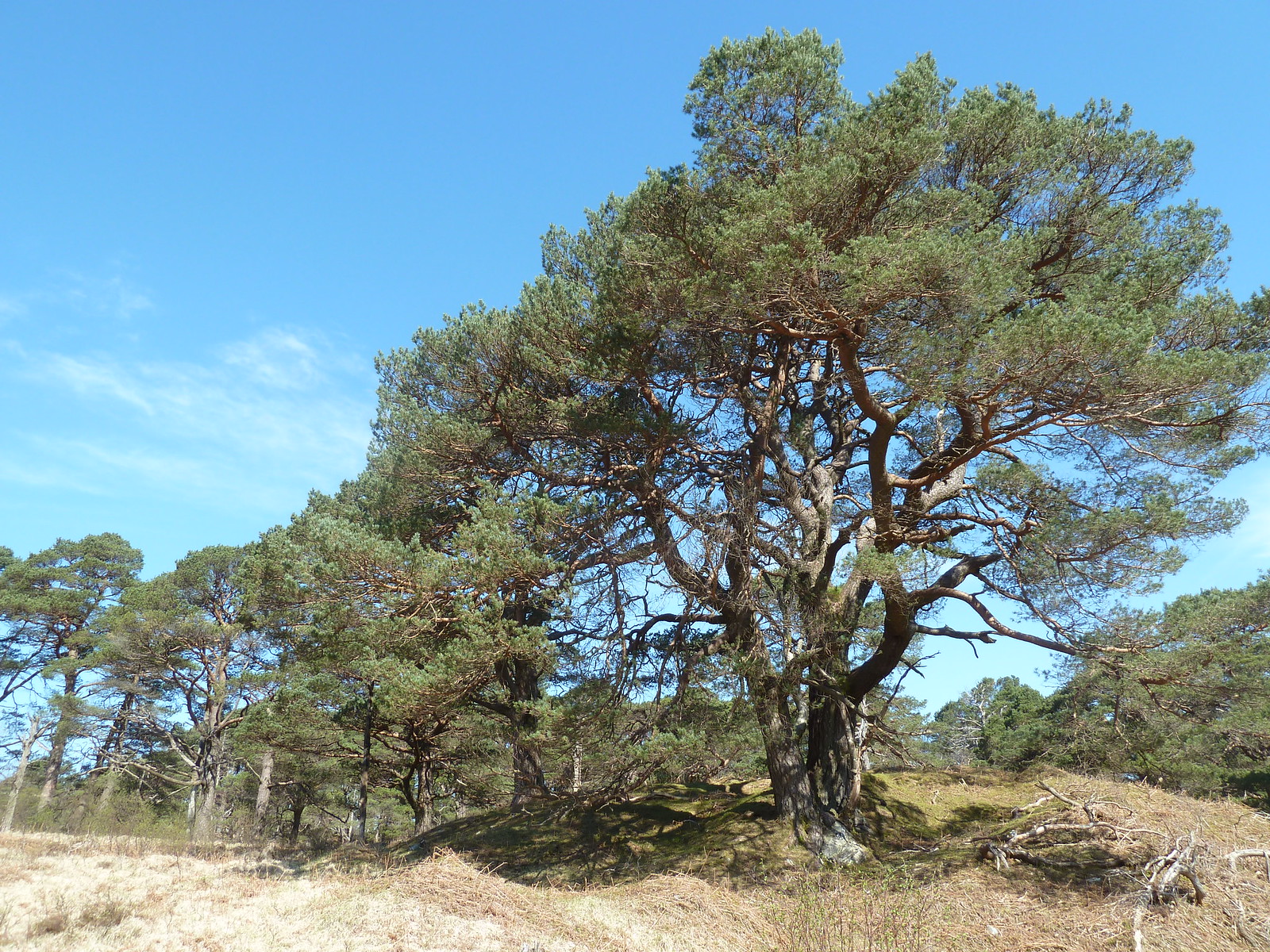 After a bit of wandering around the wood I eventually picked up the path that runs along the west edge of the Allt Coire Dubhcraig. Initially it is well above the river, but higher up runs right alongside it. Where the path meets a deer fence, as it does a couple of times, the fence is gone so there's no need to negotiate the huge stiles. 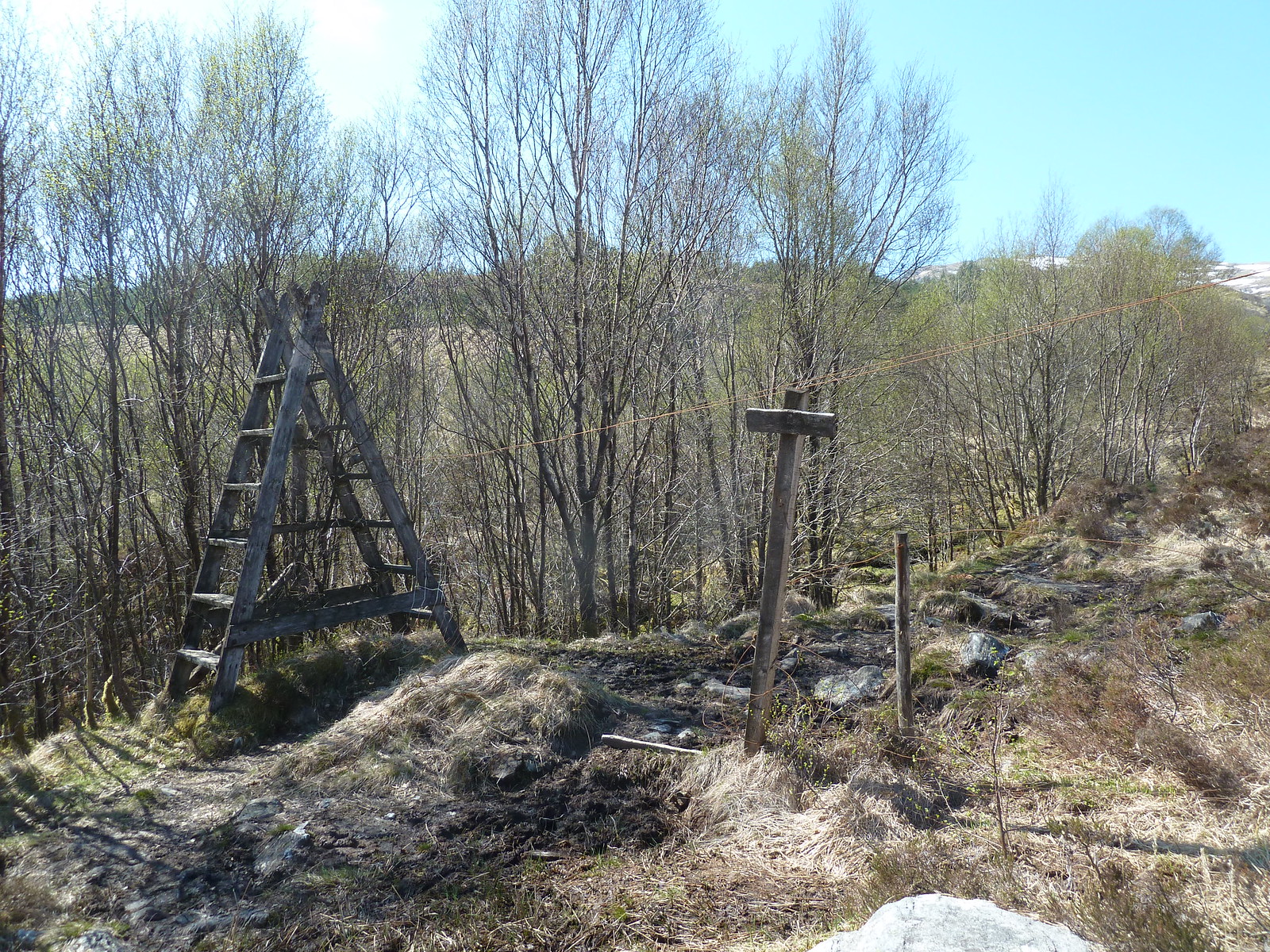 Stile over a non-existent fence

Eventually the path emerges from the woodland and continues to follow the stream up towards Beinn Dubhcraig. By this point the stream is tumbling down the hillside in a series of very attractive falls. Gradually the hill itself begins to appear.

On reading the WH walk report I expected the path to be a boggy nightmare, but it was fine, even lower down in the woods. I don't know if it's just the area immediately after the former footbridge that is the problem, but if it is then I suggest avoiding it even if the bridge is replaced and following this route instead. 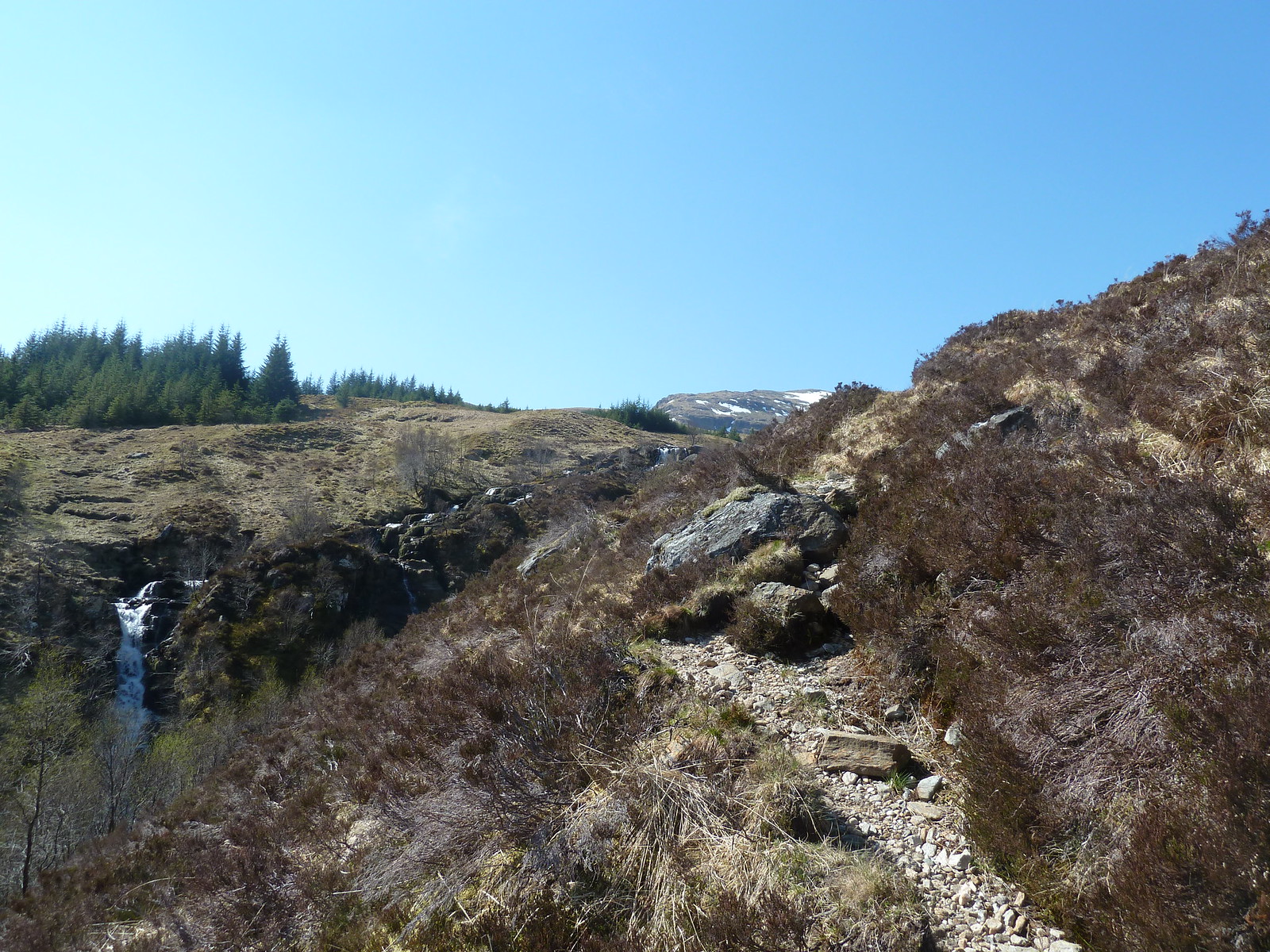 Path along the Allt Coire Dubhcraig 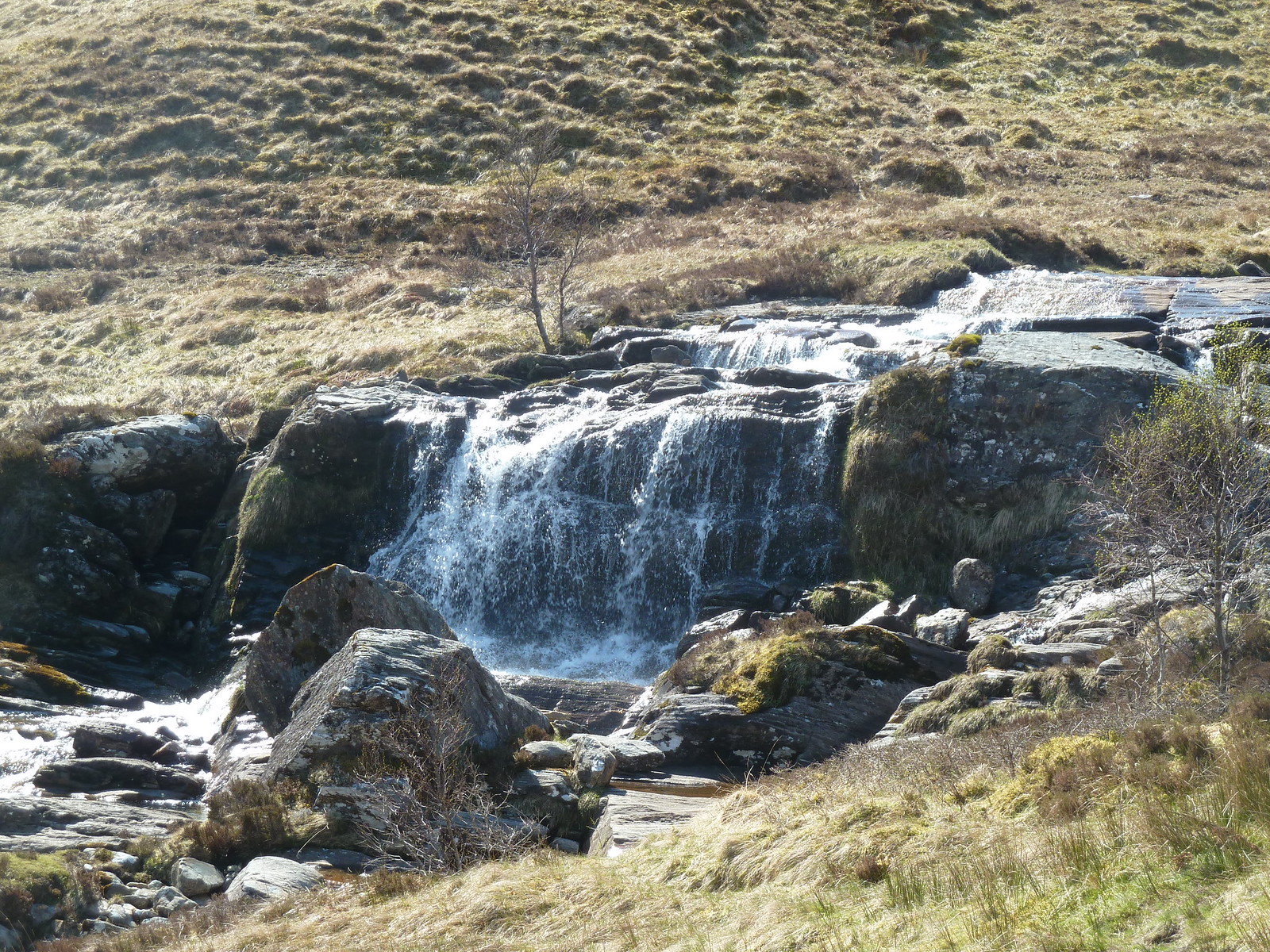 Falls on the Allt Coire Dubhcraig 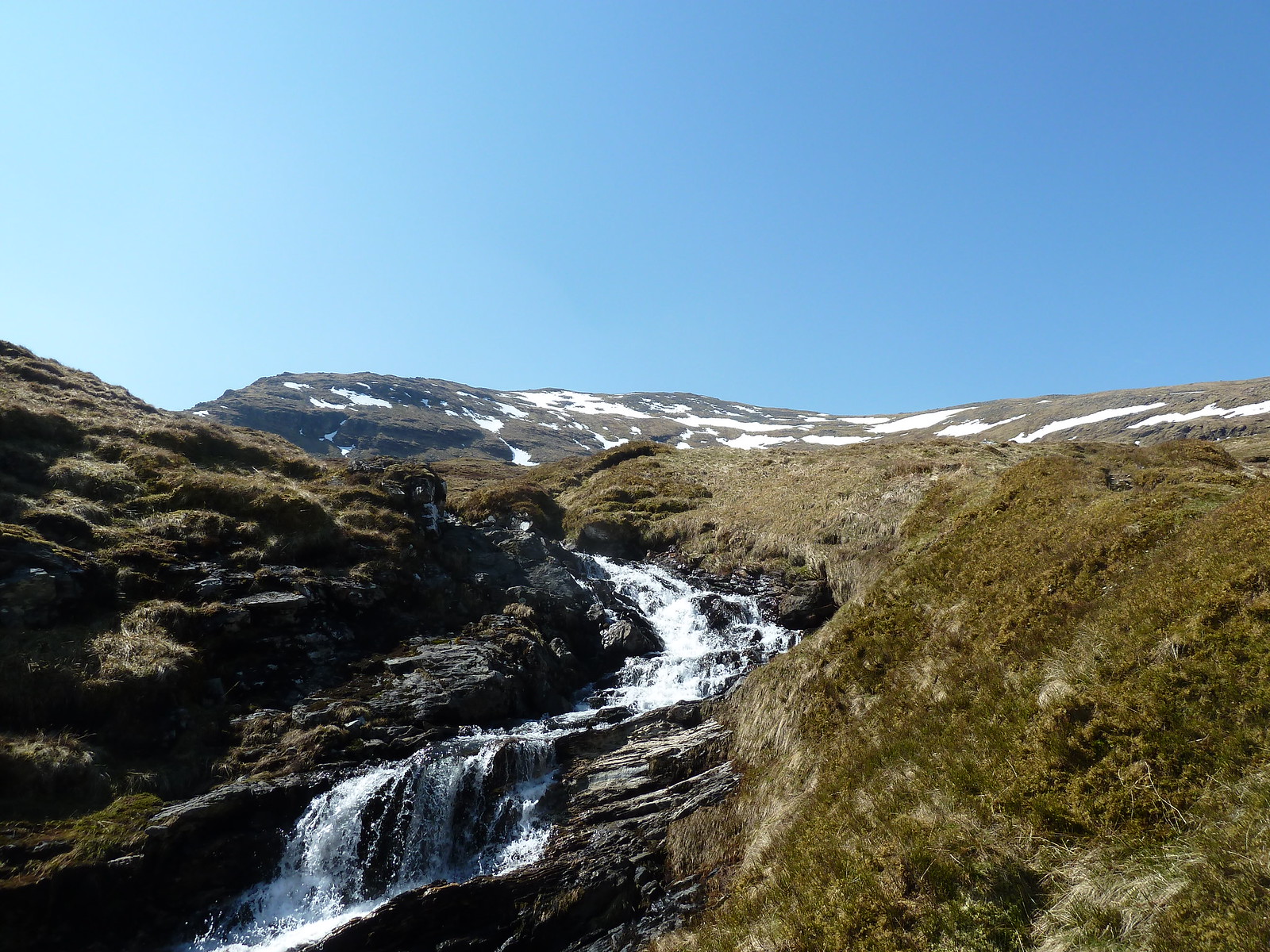 After emerging from the woods the ground flattens out a bit and the path peters out too. However it's just a matter of picking a spot on the obvious ridge ahead of you and heading for it. You will eventually emerge on the west ridge at about 900 metres, from where it's just a quick left turn and a steepish pull up to the summit of Beinn Dubhcraig. The views all round are amazing, especially south towards Loch Lomond and west to Ben Lui. The next target of the day is also clearly visible...Ben Oss. 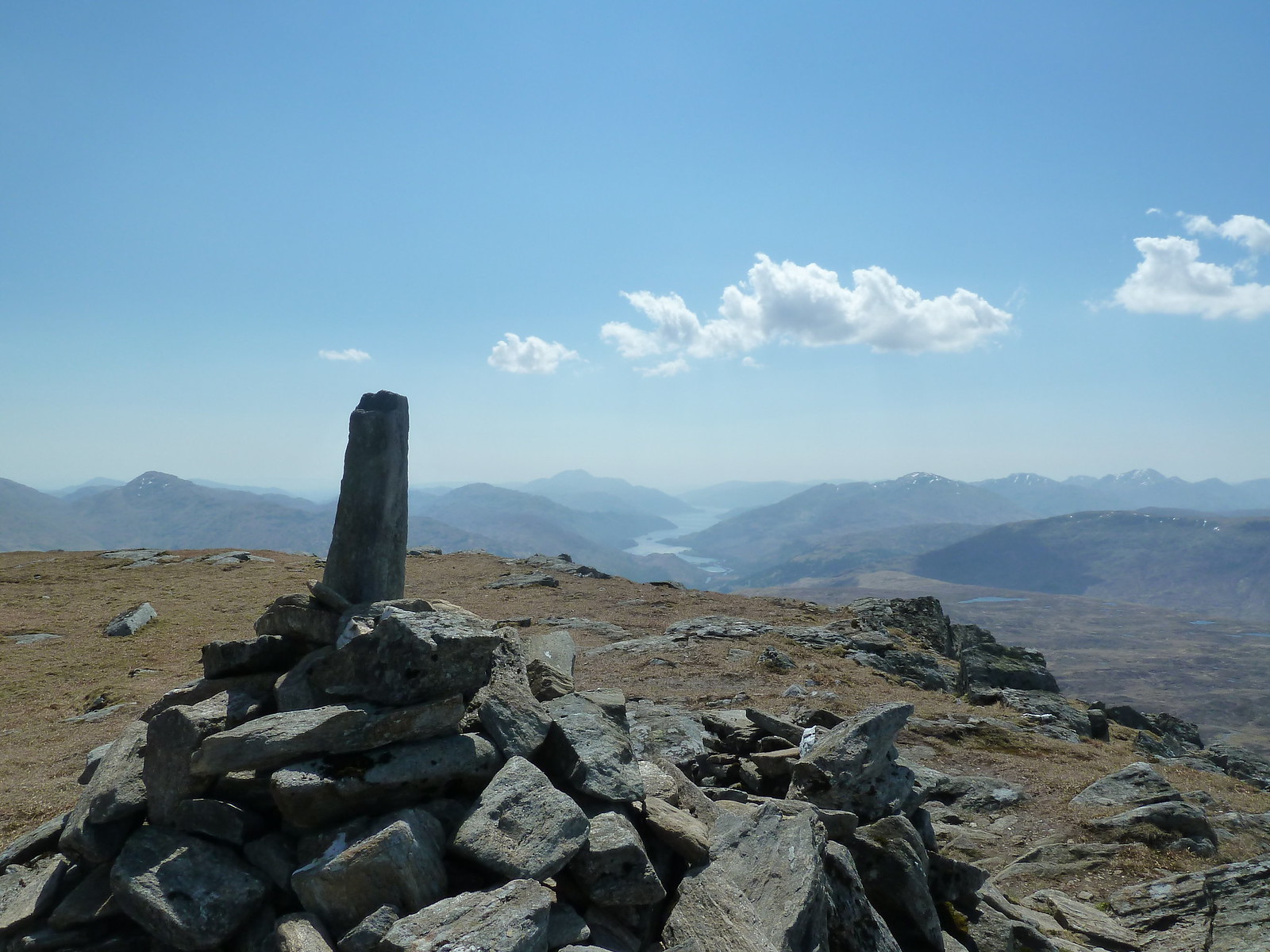 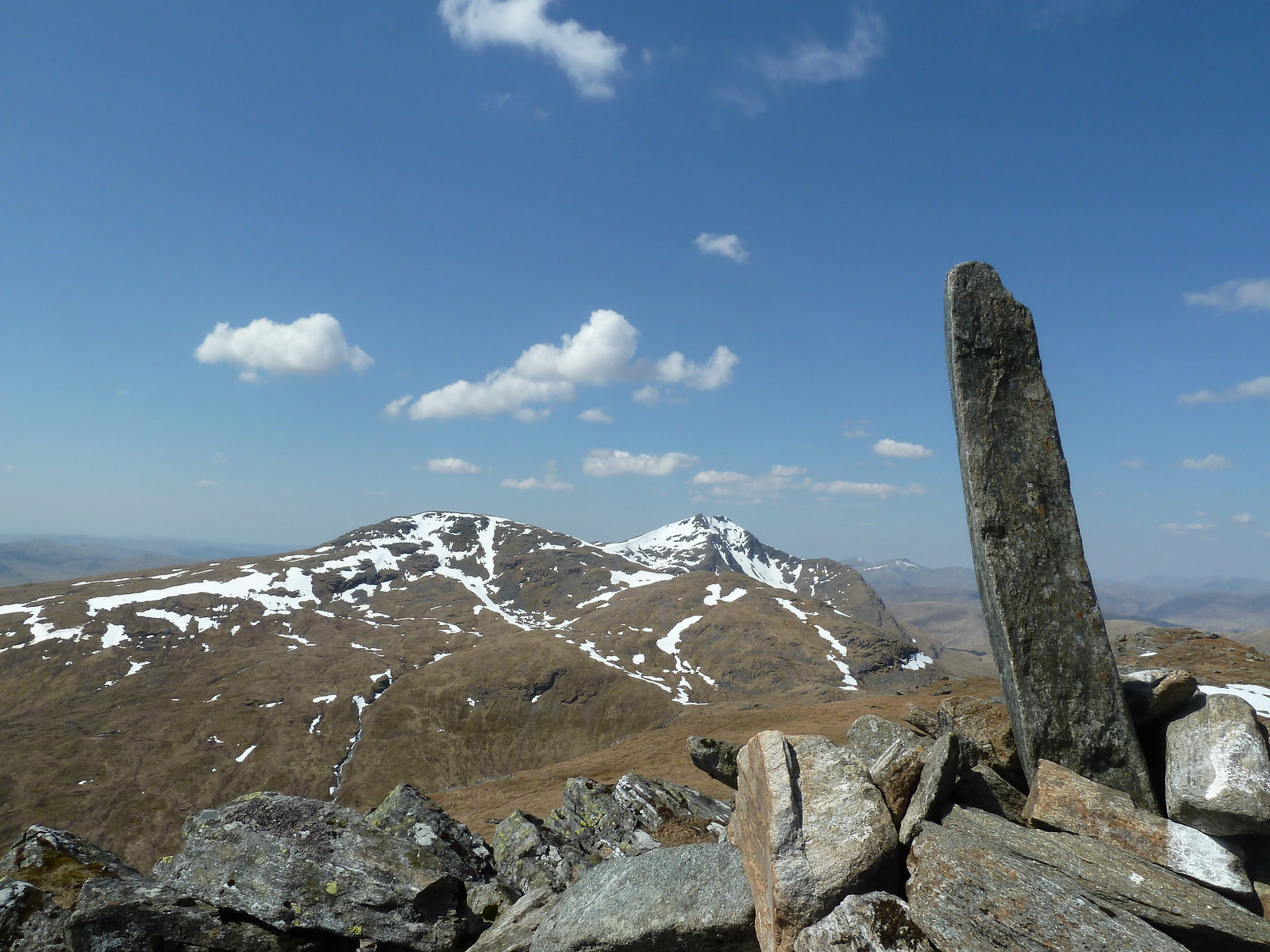 To reach Ben Oss I just retraced by steps back down Beinn Dubhcraig and picked my way through the lochans and then further down to the Bealach Buidhe. From here I picked up a path that followed the eastern slopes of Ben Oss before turning and climbing the south ridge of the mountain. At one point I noticed a path heading off to the right...this is presumably a more direct route to the summit, but I wasn't in any hurry. 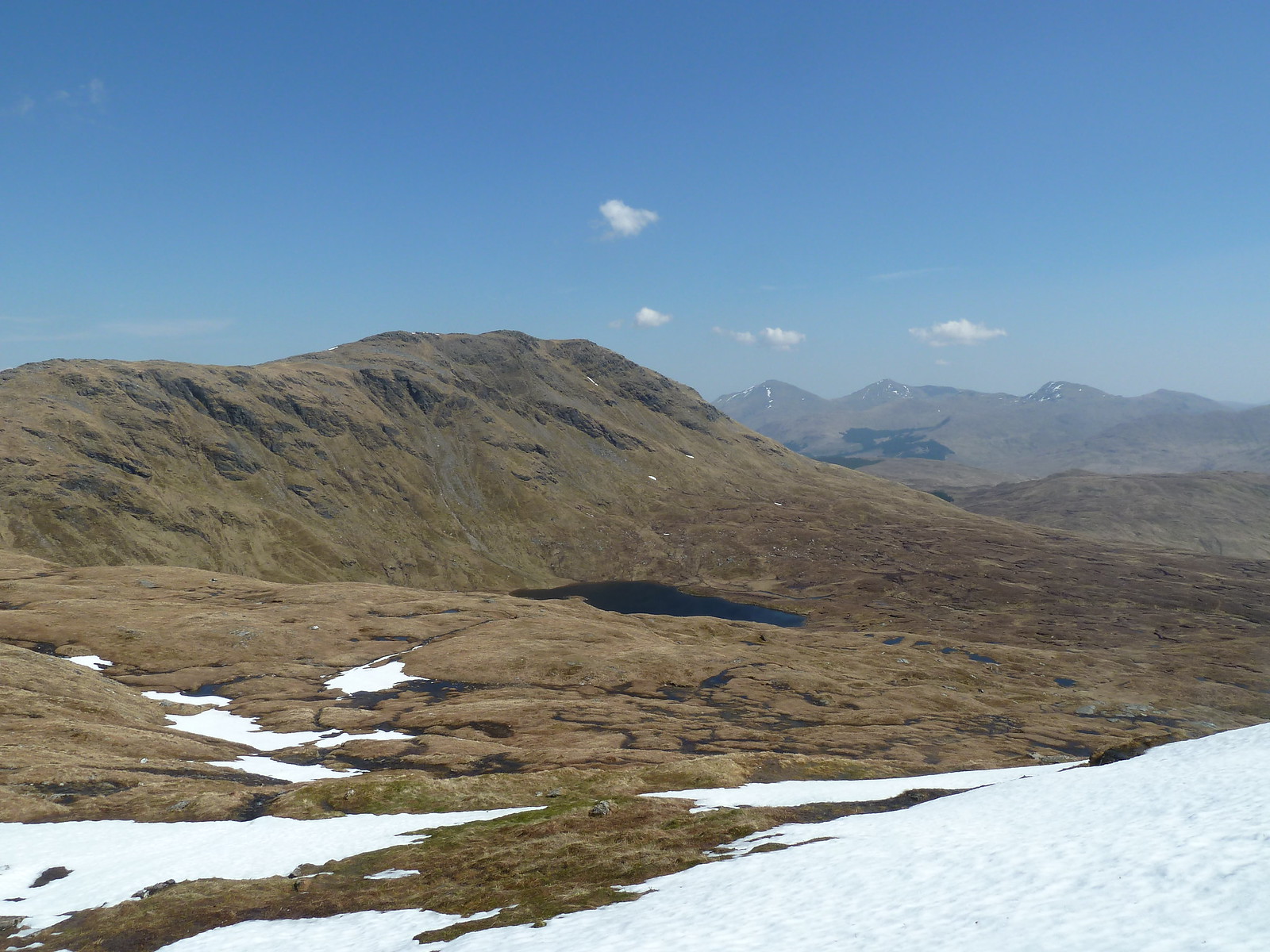 Looking back at Beinn Dubhcraig from Ben Oss

Doing it this way, the final pull up to the summit cairn of Ben Oss is fairly steep, but quite short. 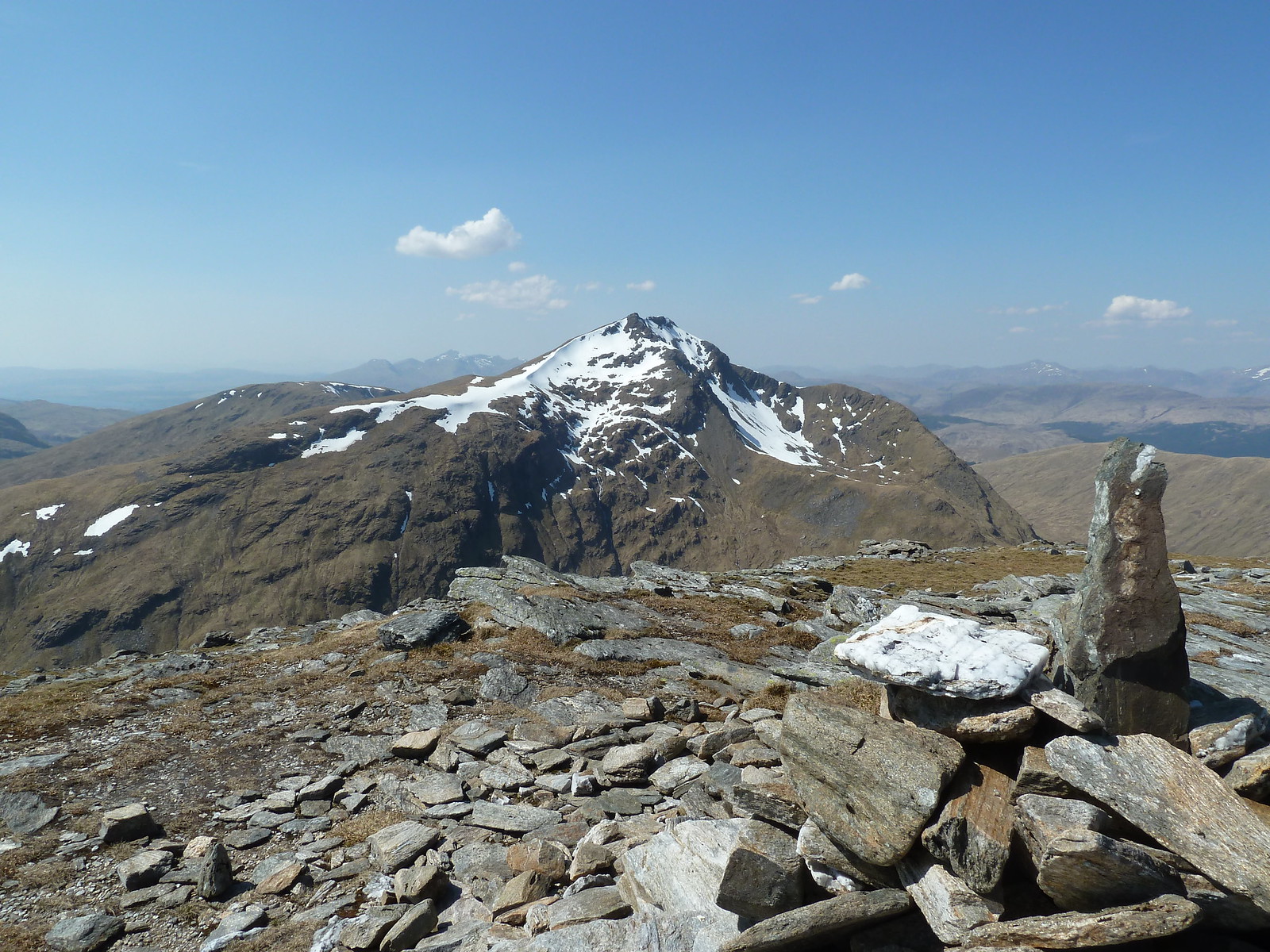 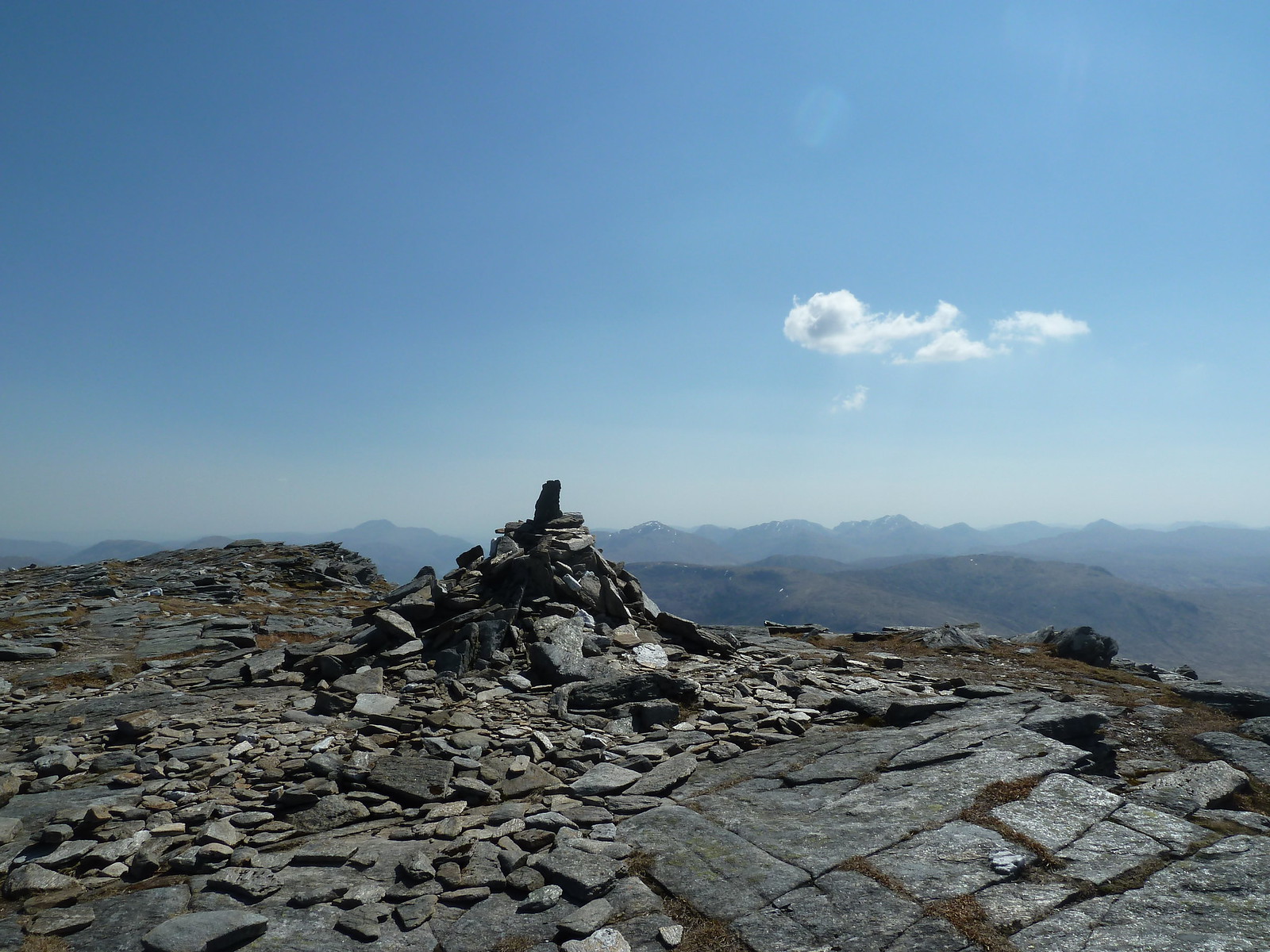 I hadn't really planned a route back from this point. I saw the two guys from the car park heading back down towards the bealach, presumably intending to retrace their steps back. They'd obviously gone up and down Ben Oss by the "normal" route. I didn't fancy a "there and back again" walk, so decided to make it a circular by heading down the western flanks of Ben Oss and heading for the track that runs past Cononish farm back to Dalrigh. Probably not a brilliant idea...the slopes were relentlessly steep and covered in boulder fields, but I eventually reached the track, and from there it was "only" an hour and a half into a relentless easterly wind and I was back at the car. As I say, probably not the best route, but on the other hand I got back before the other two guys, so who knows?

All in all a long but brilliant day out in the sun.

Cheers for the tip about looking for the small cairn.
When I climded lui I had bin bags on, but these failed miserably as the current was strong, the river was high- and I was soaked from the start
I plan on doing these 2 in the near future ( ie/ before the clocks go back) so cheers again
Looks like you had a good day and missed any bog hopping