Back up Mayar and Driesh

Back up Mayar and Driesh


Weather was just too good yesterday to do anything but head for the hills! And having seen another report on these two from last week, two of my closest it was to be! I've done both of these before, but new dog Moss is playing catch-up and so these were her 2nd and 3rd Munro's. When I dragged her away from the mud of course... It's an easy to follow route and we made good progress reaching Corrie Fee where there was a school group having a break, they were heading up to Mayar. How come I never did things like that when I was at school? Our school trip was to Scarborough! The dogs got a fuss of a couple of the kids (who did ask first) before we went on ahead soon reaching the base of the waterfalls and beginning the climb up to the plateau. Millie and Moss with the waterfall behind them

There was very little shelter from the sun, and no wind for most of the ascent but we made our way up. There was one small patch of snow to cross, but in the sun it was soft and there was no issue using the footsteps already in the snow to cross it. There was a bit more of a wind blowing once we reached the plateau, but even the wind felt hot so I didn't bother putting on my jacket as we headed up to Mayar. There is an obvious route through boggy ground, though we did take a little detour to visit a safe patch of snow for the dogs to play on...well, Moss played on the snow, Millie just helped reduce it faster by eating a chunk of it! Leaving it a slightly smaller patch of snow than it had been, we continued on to the summit of Mayar. Munro number two for Moss, a repeat for Millie. 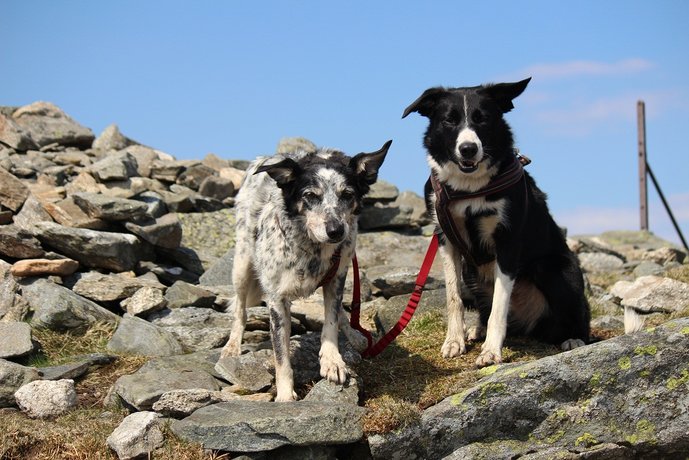 Millie and Moss on Mayar

From there the route to Driesh was obvious. When I did the route last year there were loads of hare, golden plover and deer to add interest to crossing the distance between the two summits. Though I did find a pair of Ptarmigan on the way up to Driesh. Another walker was leaving the summit just as we were arriving, and he told me that this had been one of the sites of a large hare cull (translate "cull" to "eradication"), which explains the sad absence of the mountain hares up there. He'd also met another couple of walkers who didn't go up to the summit because it was too windy, something we both found puzzling as we didn't think it was that bad!

We went on to the summit marker and here I managed to get Moss to pose for her first ever summit photo without needing to have the lead attached to her harness (doesn't need to be attached to anything else, which I find really odd!) But for this one, no lead needed! Though I think the narrow entrance to the shelter may have helped. From there it was back down the way we came and across to the Kilbo Pass which lead us back down into the welcoming shade of the forest. The walk back to the car park from that point is easy enough, though I really have a problem crossing water so didn't enjoy crossing the burn on the stepping stones even after Millie demonstrated how easy it was. But there was a bit of a sad ending as towards the end of the white water route where it reached the forestry track we found a dead lamb. It was all curled up like it was sleeping. So we stopped off at the ranger station to let him know and spent a while chatting him before heading home.

My local hills too, hopefully I'll climb them again in the next few weeks.

I love that first photo of Moss but where did you find the mud - doesn't seem to be much about after the recent dry spell.

Nice report Kat. I was there this morning and sadly the farm at the car park burned down last night

The fire crew were attending to it when we arrived at 9am.

Gordie12 wrote:My local hills too, hopefully I'll climb them again in the next few weeks.

I love that first photo of Moss but where did you find the mud - doesn't seem to be much about after the recent dry spell.

It was at the start of the walk at the side of the forestry track, usually stays muddy there lol

roscoT wrote:Nice report Kat. I was there this morning and sadly the farm at the car park burned down last night

The fire crew were attending to it when we arrived at 9am.

Hope no one was hurt!