After waiting nearly 3 weeks for a combination of a day off and decent weather, I finally decided to head off to the Lakes to stretch the legs. Several days of regularly reviewing the forecast prior to today had suggested that the weather would be good. I had already decided that this trip would involve a return to the Borrowdale area, one of my favourites, as there were several areas I’d still yet to climb and walk. For nearly 20 years I’d always walked past Glaramara so I decided to address that this summer. I packed up and set off early, arriving at Seathwaite just before 9:30. Already several other cars were already there, although it wasn't too busy. Setting off from Seathwaite Farm

The weather was as suggested by the forecast. Initially cloudy and misty, clearing by late morning leaving sunshine and fine views. The cloud base seemed to be around the 800 metre level, so I was optimistic that it would clear. With rucksack on, boots tied up and Leki’s in position, I set off past the farm towards Stockley Bridge. Conditions were fairly dry underfoot, although recent rain had made the grassed slopes slightly damp and soft under foot. After crossing the bridge, I continued to follow the narrow path, ascending up towards Esk Hause, with the massif of Great End looming out of the cloud in front. 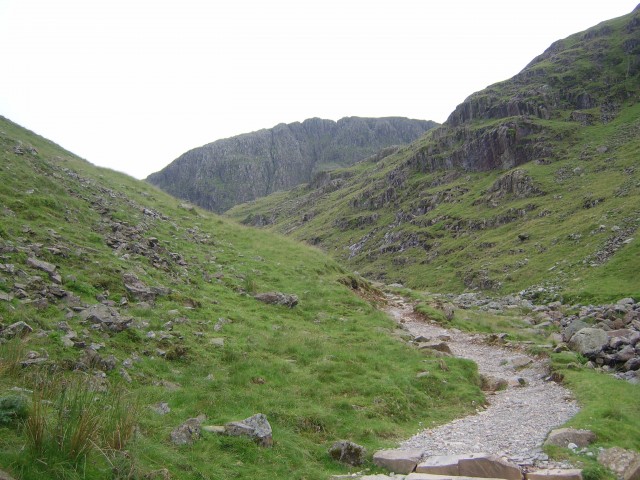 Great End before the cloud descended

Esk Hause was reached within an hour and a half of leaving the car. Not bad going really. Esk Hause is like a motorway service station.

Everyone converges there before heading off in various directions, frequently towards Scafell Pike. Today Scafell Pike and it’s neighbours of Great End and Great Gable had their head in the clouds, as if they were playing hide and seek. I decided to head up towards Esk Pike. The cloud was swirling around but there was suggestion that it might be lifting... I was being optimistic!

The route onto Esk Pike was well defined, despite the rocky outcrops and the summit was easily reached. The cloud seemed to drop a little and became quite dense. Visibility was severely limited and there was no sign of any of the neighbours nearby. The wind was picking up and it was getting a little damp, so after a munch of a cheese sandwich and consultation of the map, I decided against heading towards Bowfell. I opted to tackle some of the lower peaks in the area. The cloud obviously wasn’t going to shift, despite how optimistic I was. Down to Esk Hause

I descended back down to Esk Hause and straight up onto Allen Crags. I’d planned to stop here for a little more refuelling but the wind seemed quite lively at this level, so I scrapped that idea. The cloud again seemed to be following me as the base level dropped and covered the summit. Glaramara was out of sight, but the path towards it was clearly defined so I plodded on.

The undulating route became quite boggy in places and at times the path seemed to disappear only to reappear again shortly ahead. The views were.... limited. After seemingly false summit after false summit, the true Glaramara summit was reached. Consultation with the map and compass was required to negotiate the descent down, at least below the cloud base until visual landmarks were evident. The path had all but gone so a compass bearing was required. There appeared to be a rock face and steep drop on the route down so I decided to avoid this in the poor visibility as I didn’t fancy end up on the scree slops down into Seathwaite.

I decided to bear east a little down the initially gentler slope before heading northwest to rejoin the path. In theory, this worked well. In practice, the mizzle, cloud, and boggy underfoot conditions meant that finding the path would be a challenge. However, it was soon found, and the long descent down from Glaramara began. As I dropped down, the visibility began to improve significantly and the visual landmarks I had hoped to see were evident. I was pleased that I was descending this route rather than climbing it as it was a long slog down.

It was a quick stroll back along from Seatoller to the car, completing another days walking.

our_route.gpx Open full screen  NB: Walkhighlands is not responsible for the accuracy of gpx files in users posts
Penguin