Corrour Trio, Third time on na Lap AND a Compleation

Corrour Trio, Third time on na Lap AND a Compleation


Today was Wullie 'Quoman' Rae's compleation, Ben na Lap was the hill of choice. Having been on na Lap twice before, and the weather promising, I suggested to Wullie that I would come in on the earlier train, pick off Carn Dearg and Sgor Gaibhre the meet up with the compleation party on the way back to the station.

I booked my return ticket from Corrour to Crianlarich but you cant book the sleeper train, its a walk on service

Arrived at Crianlarich around 7:30am, train due to leave at 7:47 so plenty time get up to the platform.

Once on the train, off came the sandals, on with the boots and gaters. Wanted to be ready to head straight off. I had plenty of time to do the 2 hills but at the back of my mind was. "if I can get back down to the top of Loch Ossian by 1, I stand a good chance of meeting the compleation party on na Lap by going up the back way.

Off the train like a dug after a rabbit! Lovely clear bright morning but with a very cold wind. Stormed off down the track towards the loch, willing the exercise to heat me up lol. There was a large party heading from the train to the hostel, complete with masses of Sainsburys shopping bags full of food. Was to meet up with them later. View through to the Alder range 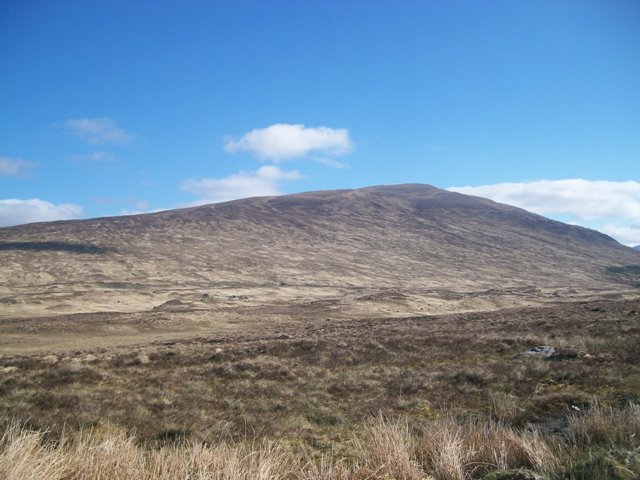 Up to Ben na Lap from the track

I had originally thought about going down the lochside then back over the hills but as I now wanted to try to get in na Lap too, the hills came first. None of your leisurely saunters today, I was almost breaking in to a run lol and for anyone whos walked with me knows, that doesn't happen often.

Checking the map and keeping an eye open for Peters rock, I stopped for a minute to munch a pork pie, get the poles out for the ascent and take some snaps. Rounding the track, found the rock and the path heading up the hillside towards Meall na Leitire Duibhe. It's easy going up here and I decided to head slightly to the right rather than the top itself. At this point I spotted 2 people ahead, just under Meall na LD. They quickly disappeared from view.

Made it to the ridge and kept pushing on to the summit. 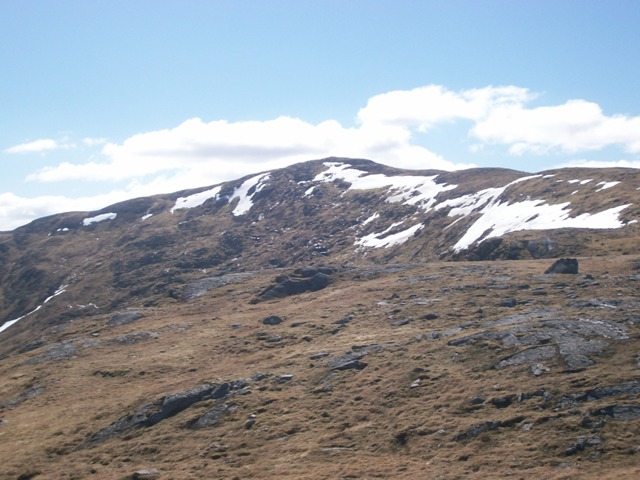 Last of the snow in the area 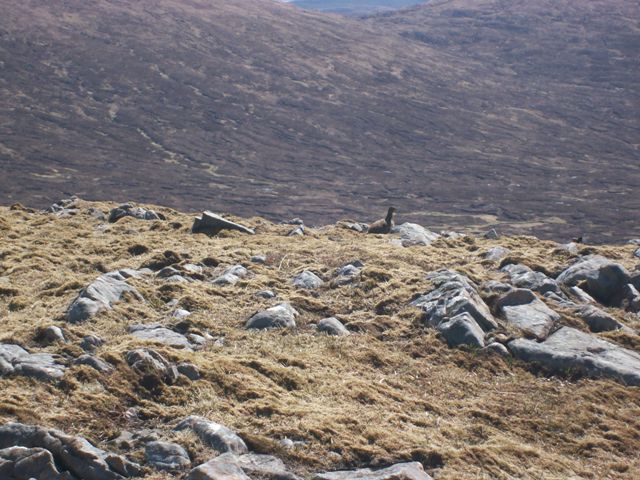 Bit of the local wildlife

Reached the smashing big cairn on a plateau, the second munro of the day off to the east with a well worn path clearly visible to the top. 10:52am and a little under 2 hrs since getting off the train. 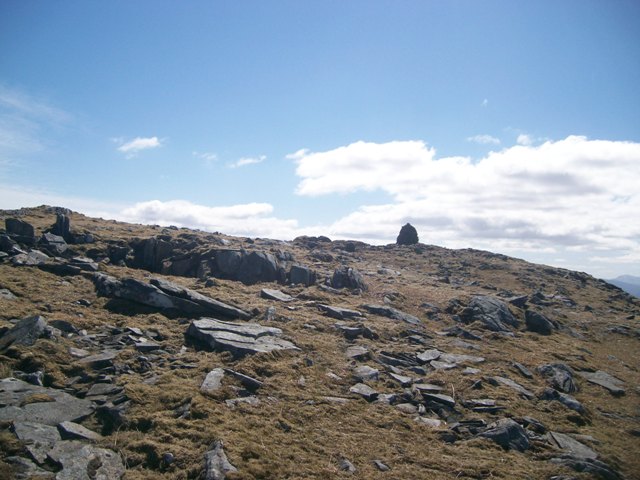 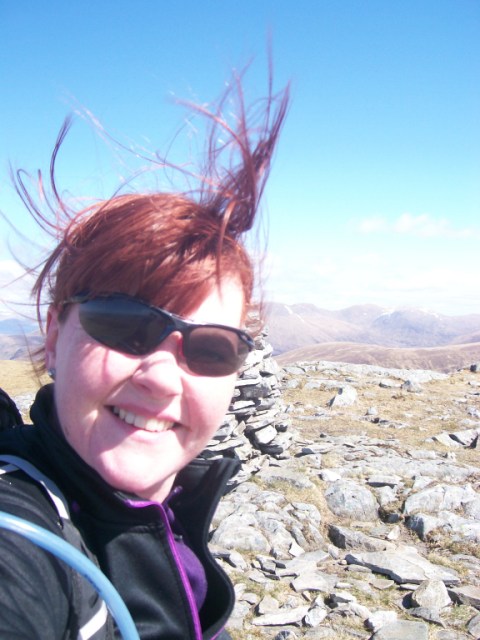 Spent a few minutes at the top, found a pair of glasses on the cairn. Decided to bag them and post on Lost and Found,,,at time of writing, no takers.

No sign of the two I'd seen ahead until I dropped off the first summit, could then see them below heading for the dip between the two. My mission, and I chose to accept it, was to catch and overtake them lol

The ground down is very easy going so belted on, the odd stop for pictures etc but kept closing the gap. Just as the ground started to rise towards Sgor Gaibhre I caught up with the pair, who had obviously been watching me close in as they shouted out a good morning and that I was "flying". I quickly explained my mission, to be on Ben na Lap by 2pm and after a few more words, the ushered me onwards and past. Again, anyone who has walked with me knows,,that is a very rare occurrence lol

It's not a steep ascent but I had been busting my buns to get here so slowed a bit but managed to get to the summit at 11:53 and heading back off again at 11:55. Still with a view to being back down at the shooting lodge by 1pm. 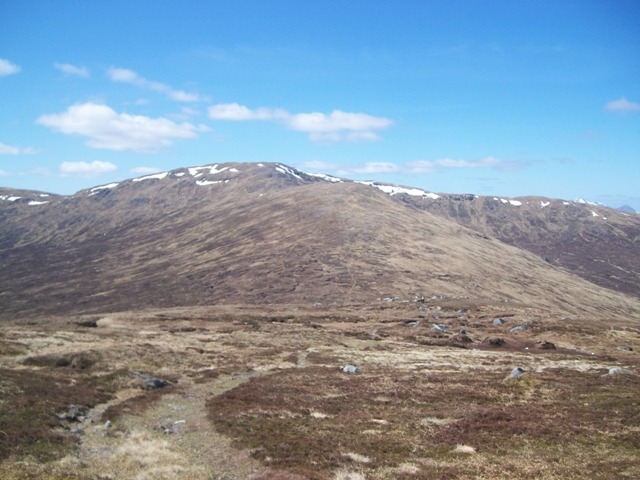 Ben na Lap still looking a long way off over Sgor Choinnich....will I make it???

Sgor Gaibhre has a second top, Sgor Choinnich, but there is no need to reach its height. An easy traverse takes you across and round towards Meall Nathrach Mor. Again, I chose to avoid the top and head off down to the trees. No paths here, just heathery slopes, not too bad underfoot and fairly dry. 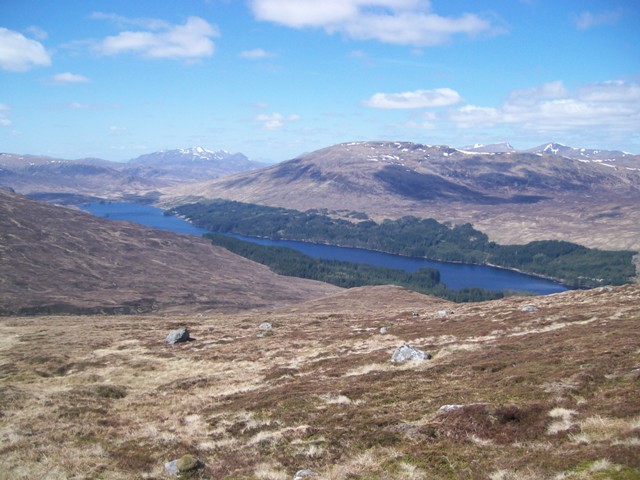 Loch Ossian and its green shroud of trees 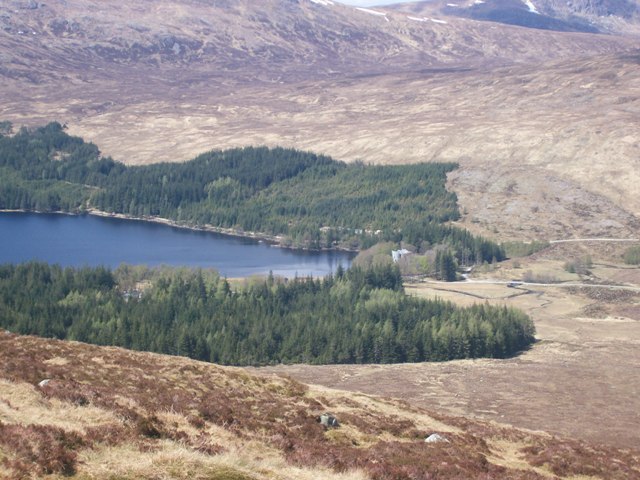 Next target, the shooting lodge at the East of the loch

The WH report says keep to the right of the trees and find a gate. As you reach the end of the trees, what looks like a newer deer fence is in place, following a slightly different line from the older ones near the trees. But!!!! no gate!!! I could see a corner of the fence was pretty snarled up with people climbing it, so I took the same route and was then able to follow the older fence posts as they took the tree line round towards the head of the loch. Crossing a strangely squishy, but not overly wet field, I reached the track. 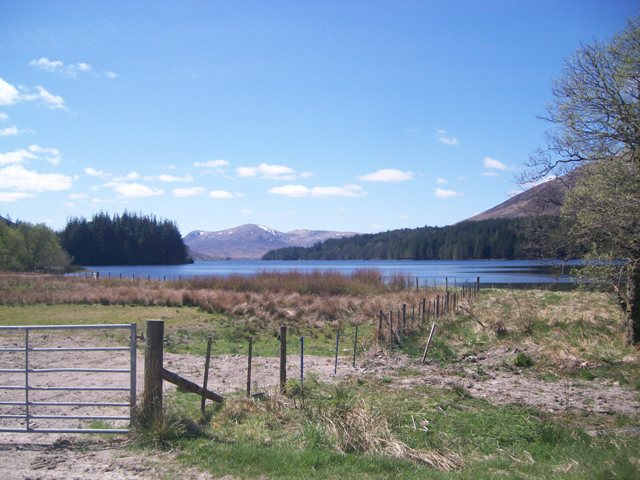 Back to ground level,,,more up to come

Instead of taking a left and back round to Corrour, I went right and headed round the lodge. A strange looking building behind very high stone walls. But, I'd made it by 1pm so was buoyed and ready to push on. High wall round the lodge

I had checked a few walk reports of the route from here to Ben na Lap but despite seeing a dotted line through the trees on the map, I couldn't find it on the ground. So, I just smashed my way up through the trees at what I reckoned was the thinnest section of plantation lol. This involved balancing on big logs over small streams lol

Got a few bruises for my efforts from some badly placed branches. I just kept aiming for daylight. On clearing the trees, I was faced by a 7ft fence with no sign of a gate and with the trees slung low above. I found a spot clear enough of overhanging branches to get up and over with my pack on. Phew!

Ben na Lap has a reputation of being an easy target, no effort, job done kind of hill, well not from this angle

The ground between the trees and the bottom of Creag an Fhathaich is boggy, clumpy, haggy and exhausting. The first stages are flat enough and I saw the large group from the hostel some distance ahead, they seemed to be standing in a big group and not moving, then as I got closer, they started off again (Something I said?

The crags above form quite a barrier so I picked out a possible route, over to the right, towards Allt Coire na Lap before switching back left and up a long slope out of Coire na Lap. This route was awful. I honestly felt I was walking 'into' the hill, not up, kept having to chip to the side to gain height. I overtook the group as they had another breather, again explaining my haste to get to the top to meet the compleation party,,with WHISKY! It was now 2pm,,,I'd wanted to be at the top by now.

Myself and one or two of their faster members leap frogged each other as we made our way up Coire na lap, none of them had any packs, I was soldiering on after 2 Munros, with a reasonable sized pack and puffing like mad. Looking back down from the East face of na Lap 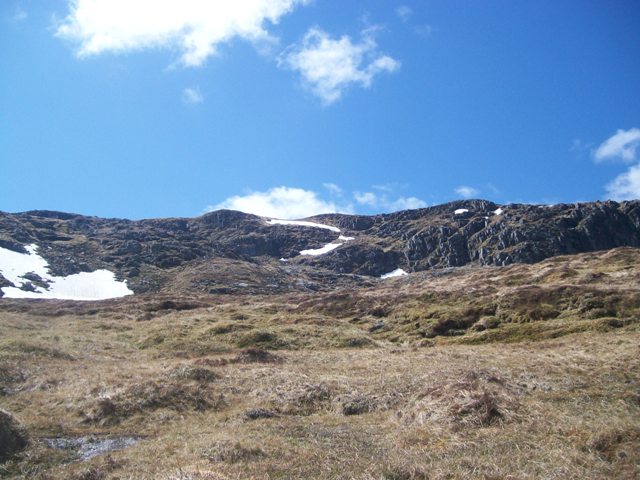 ...and up into the Coire na Lap,,still trying to run lol

As the coire steepens, there are a few remnants of snow lying around, again, I worked out a route up. One of the party stopped for a chat here and then we both pushed on and up, he in front. The last section up was a bit of a scramble round some bigger boulders then you simply just land on the summit plateau. That had to be one of the most exhausting ascents ever.

It was now well after my target of 2pm, more like 2:45 lol so with little hope of meeting the compleation group, I had a scan across the plateau. I had come up North of the cairn and as I looked round, spotted a big group at the cairn itself, silhouetted against the bright sky. Strode off in that direction. Wonder of wonders, Wullie and the party were still there. A combination of a lovely day and Dawn being a bit sick meant they had spent a lot longer there than normal. Big hello's all round, congrats to Quoman, team pics and a bit of catching up with everyone before we all headed off around 3:15pm 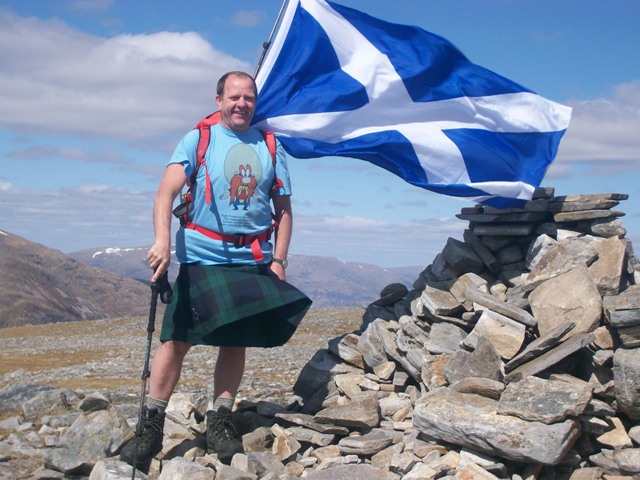 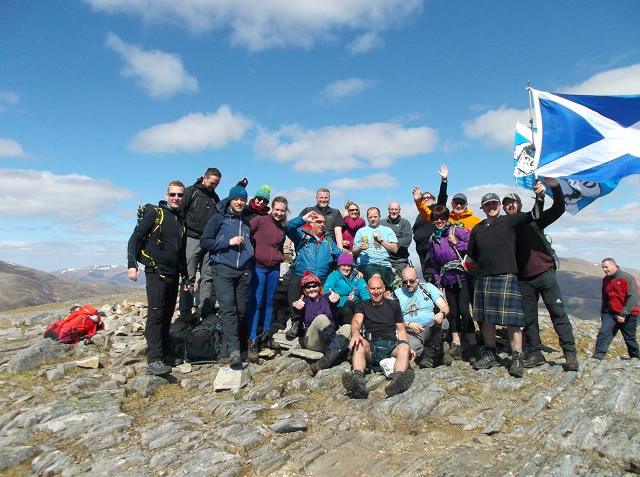 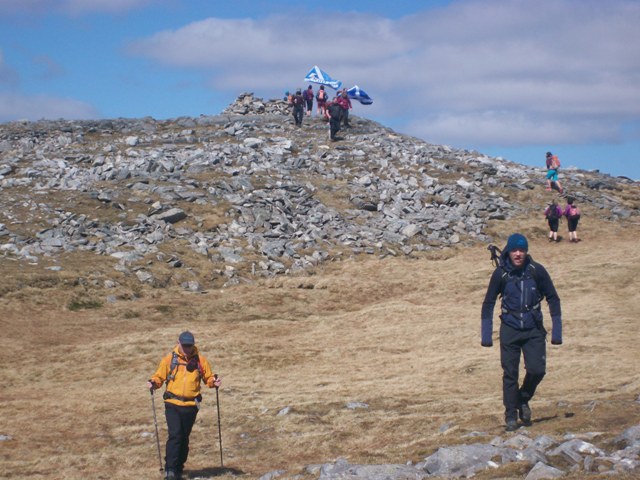 Drifting off the top to head down

All back at the station for food and drink, sitting outside on the picnic benches for an hour or so before the train is oh so civilised. Train journey back,,not so,,well not for the unsuspecting passengers when about 25 happy revellers descended on them. 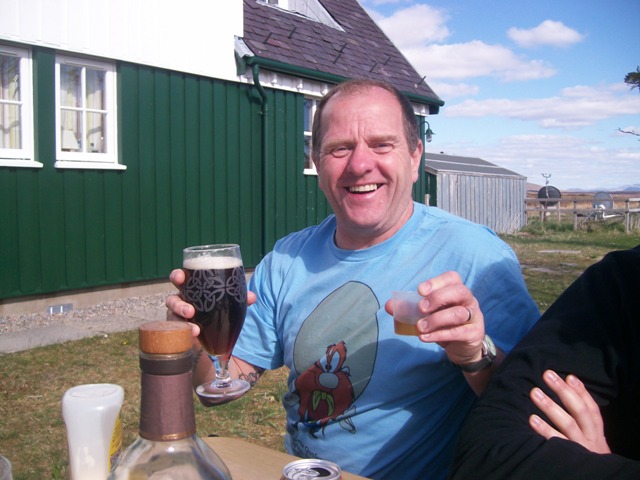 In the mood for a party 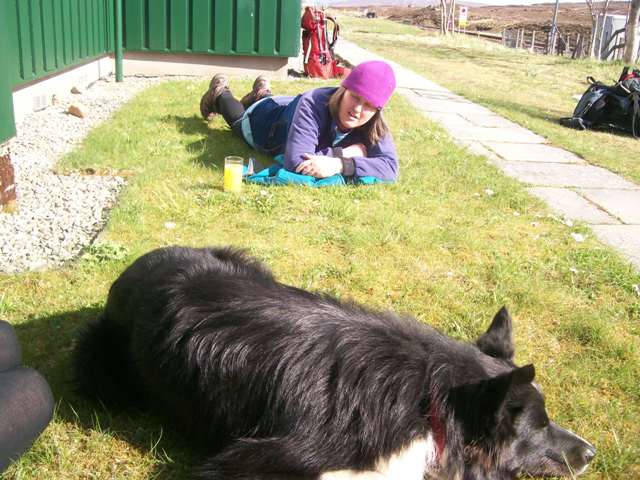 Dawn and Bob chilling in the sun

Still, I managed to excel myself and my slow reputation and did all 3 munros in 7hrs 20 mins, just to see a happy man at the top of the last one. Well done Wullie 'Quoman' Rae

Re: Corrour Trio and Third time on na Lap AND a Compleation

Re: Corrour Trio, Third time on na Lap AND a Compleation

Well Gill, i am glad you made it to the summit for the party and drinks i was looking across all the time to see if i could see you

.
If it wasnt for the weather we would have missed each other but thats another story eh Dawn that was a big round of hills you done and well done.

Re: Corrour Trio, Third time on na Lap AND a Compleation

Firstly many congrats Wullie, sorry I couldn't make it

Gill that was some walk you did, when we did that, your route was the one we had planned - once we reached the end of the Loch we opted for plan B. Followed the track back towards the station and then headed up the usual route to BNL, dumping our rucksacks about halfway up