With a Friday off work and a favourable midweek forecast from MWIS indicating ‘west is best’ myself and Hill Bill plotted a trip to the Knoydart area in the hunt for a couple more blue balloons. Initially, our plan had been to bag the Spidean Mialach / Gleouriach circular but having parked up at the starting spot well ahead of schedule, we pondered whether or not to go for Sgurr a’ Mhaoriach too. A couple of seconds passed and then the greedy bagging instincts kicked in. We decided to go for it - but settled on tackling Sgurr a’ Mhaoriach first based on a notion that, in reality, we may not add it on after picking off what we had set out to do, and so it was better to be playing catch up against the original target. A form or reverse psychology I guess but something that turned out to be a tactical blinder as the day wore on.

We drove the short distance to cross the bridge, parked up and were on our way around 07:45. Walked the short distance along the tarmac before picking up the stalkers path and passing under the pylons en route to Bac nan Canaichean. Not much else to report for the remainder of this munro. The morning fog was lingering longer than anticipated and after traversing the short ascents and descents of Sgurr Coire nan Eirichean we reached the misty summit cairn of Sgurr a’ Mhaoirach. 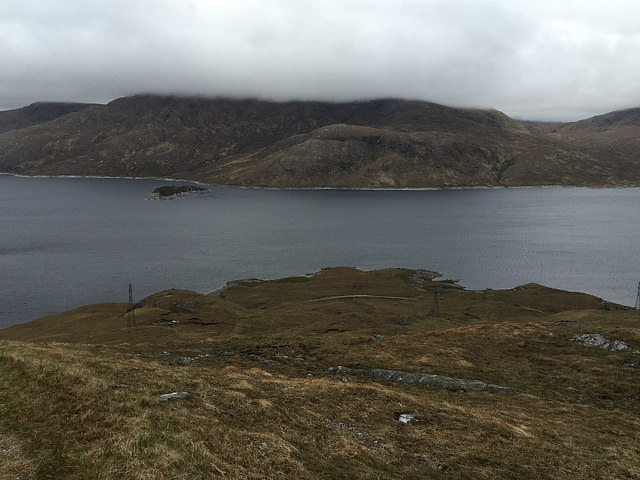 Looking back to Loch Quoich 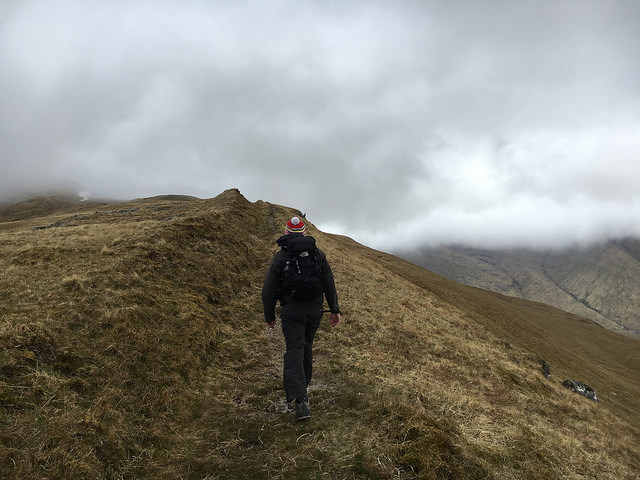 Entering the mist on approach to Sgurr Coire nan Eirichean

After the customary pork pie and photo slot we were soon on our way, opting to retrace our steps rather than complete the full loop. After a speedy descent we were back at the car just over three hours after departure. The starter polished off it was now time to tuck into the main course.

We hadn’t seen any other walkers on Sgurr a’ Mhaoriach and when we arrived at the lay-by for the start of Spidean Mialach we were the only vehicle present. A day on the hills to ourselves by the looks of things. Another good path (marked by a post) puts you on the way up towards Coire Mheil where height is gained quickly. No issues crossing Allt Coire Dubh - the warm weather of late had seen to that - before we began the energy-sapping trudge up the slopes of Spidean Mialach. A thickish cloud base was still enveloping its upper reaches but to the south it was a little better with fine views across to Gairich. 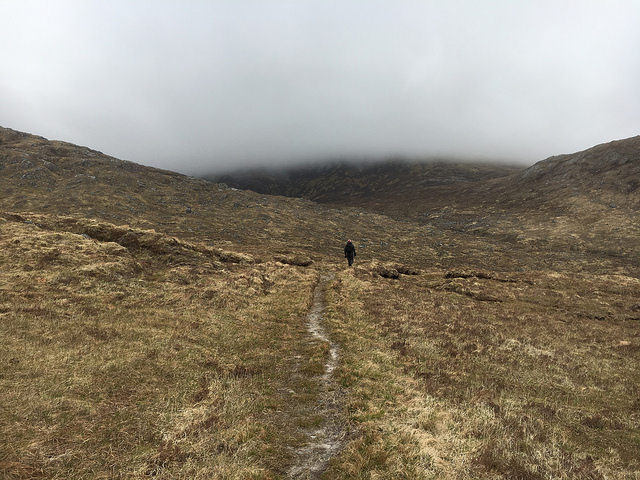 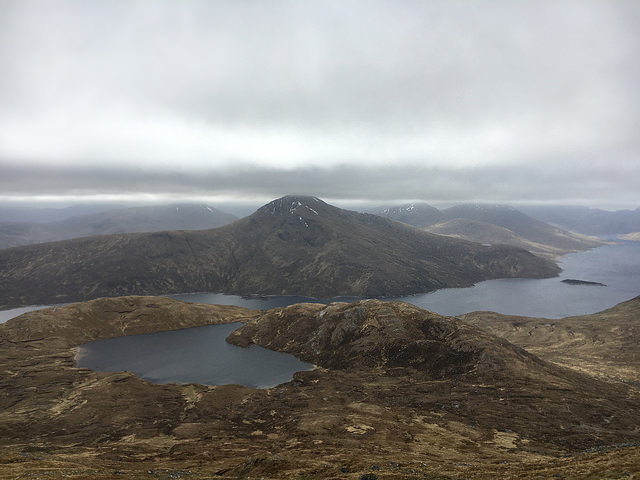 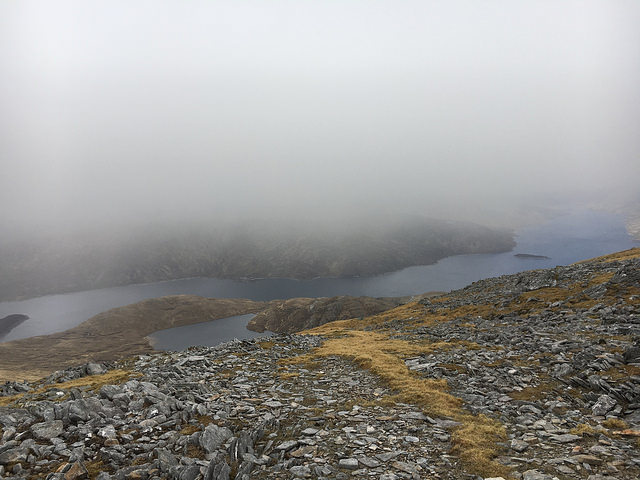 Continued the march up, through the mist and arrived at the smaller cairn (marked 977m on the OS Map) before making the short walk east to pick up the main summit. Unfortunately, no views from the top again and with the cairn perched precipitously close to the cliffs we would just have to imagine what it would be like to have a pork pie in this setting. We just hoped we’d strike it third cairn lucky.

Heading down towards the Fiar Bhealaich, the pockets of blue sky we had previously seen appearing intermittently began to be replaced with something more consistent. 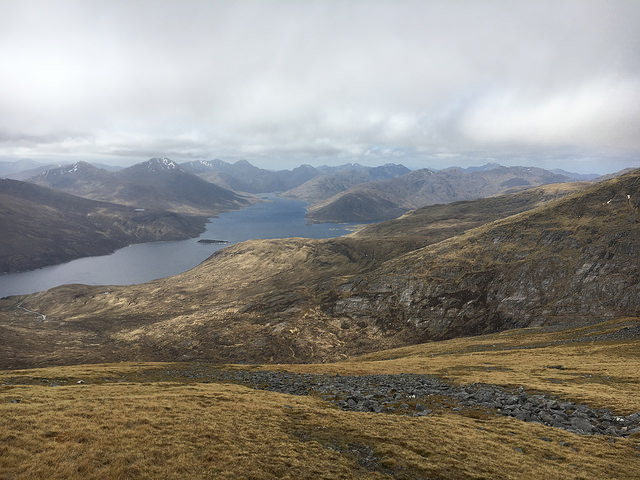 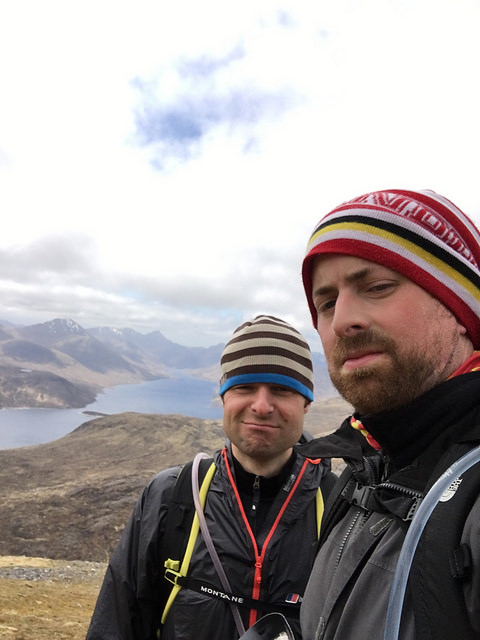 Very much enjoying ourselves

Needless to say, once we had done the up and down sections, we were in good spirits when we reached the summit of Gleouraich. Seeing Sgurr na Ciche and the hulking mass of Ladhar Bheinn only whetted our appetite to return to this area. Kintail too, especially the South Glen Shiel Ridge, also looked pretty special from this angle. Not that we would have got this had we stuck to the original plan and, as we sat basking in the expansive views, we agreed this is how a referee must feel when his decision to play the advantage rule works to perfection. 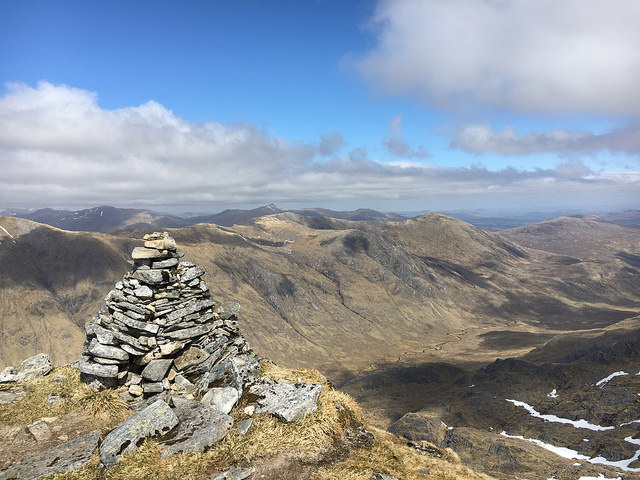 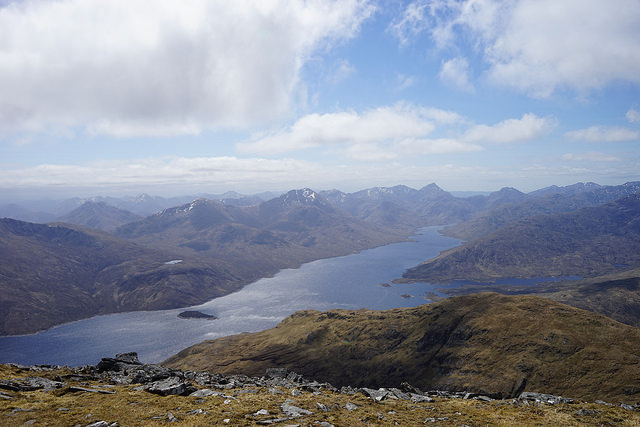 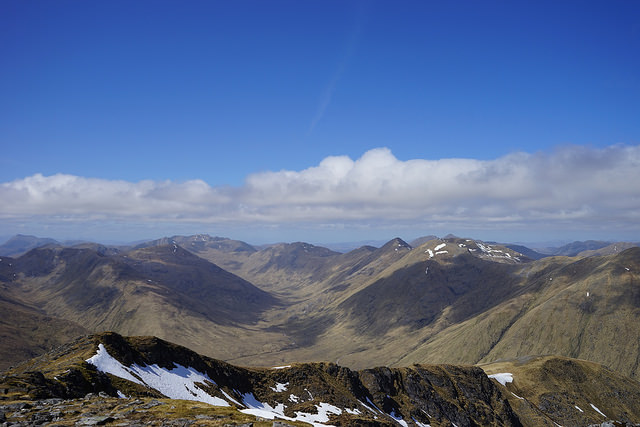 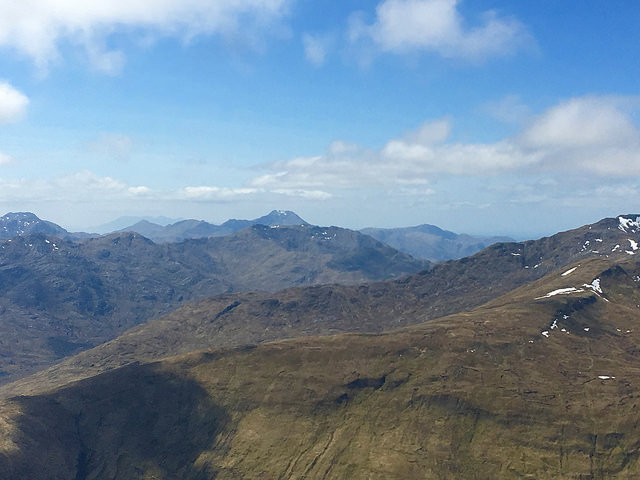 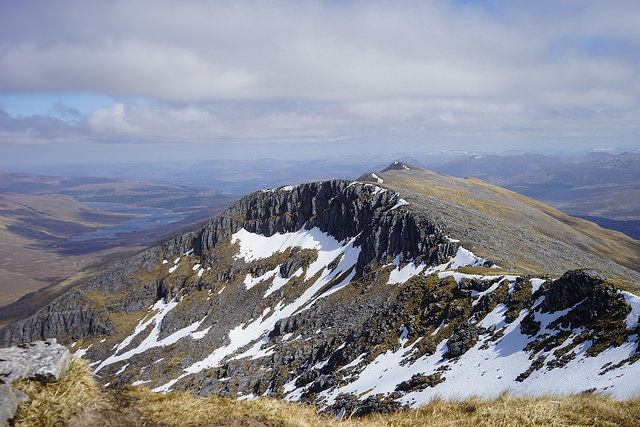 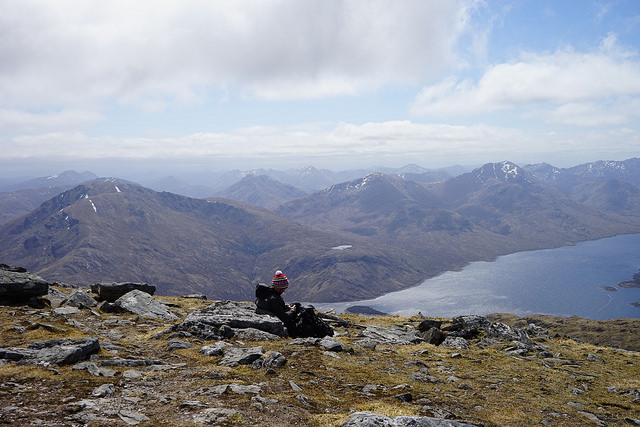 Having been trigger-happy with the cameras, we reluctantly left the summit but picking up the stalkers path to Drum Seilach we were able to continue to enjoy the surrounding views. 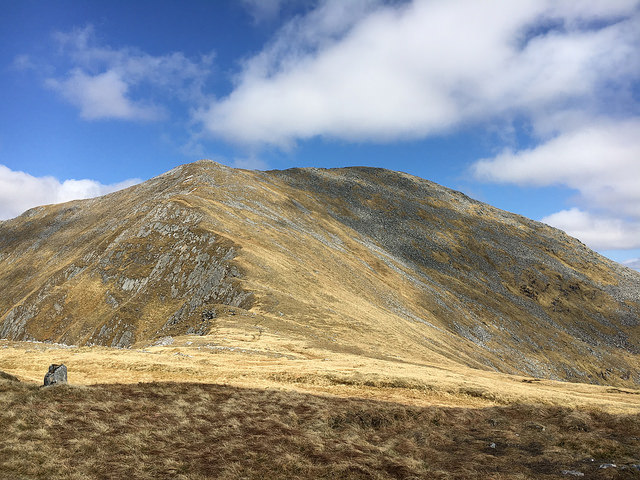 Looking back to summit of Gleouraich 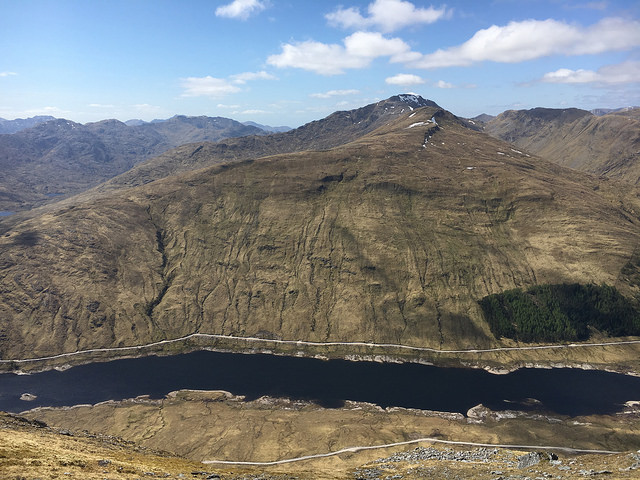 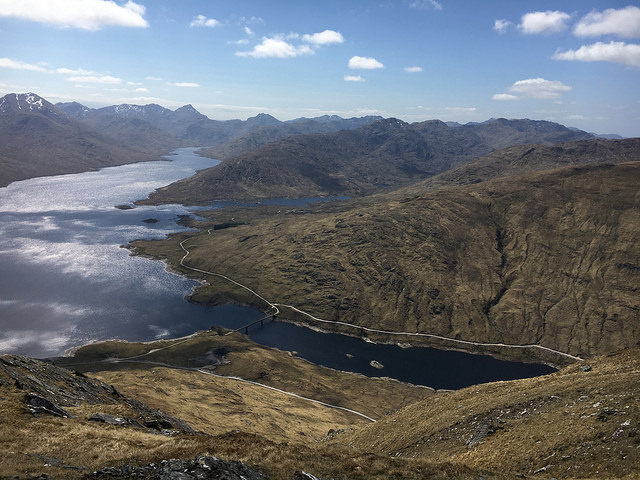 Looking down to the bridge 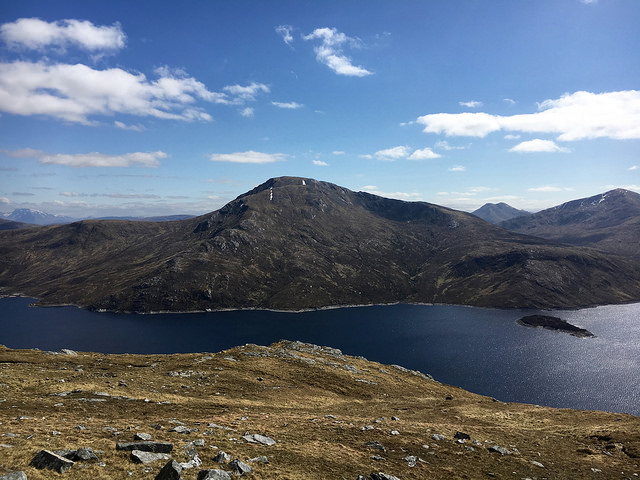 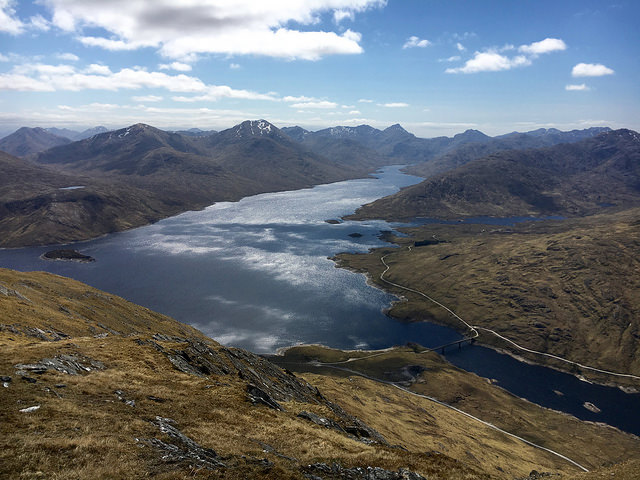 While the shoreline of Loch Quoich seemed to be getting closer we still had a bit of height to go but the excellent zig-zag path that descends Sron a’ Chuilinn soon had us approaching the culmination of the walk. 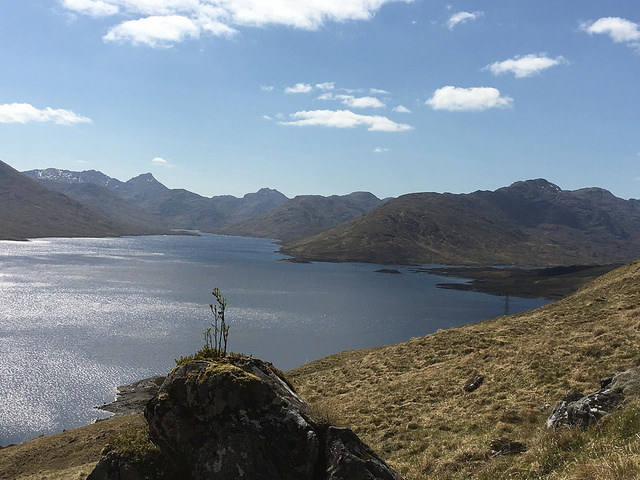 Across Loch Quoich as approach end of walk

A small yomp through the bushes and we emerged back at the car, clocking in just under the 5 hour mark. Overall, a cracker of a day (the early bird and all that) and fortunate enough to appear to be the only ones in the hills. Already looking forward to the return and going further into the Knoydart wilderness.

A brief video highlights package of the day out is available here: https://www.youtube.com/watch?v=vgJvMhWMTkc

These are stunning hills aren't they

glad you got the views at last

glad you got the views at last

Thanks Jaxter - they sure are. Good use of the bin bags in your report

Fine showcasing of a wonderful, wonderful part of the western Highlands.

Great pictures. Does no one just go out and do one or two hills anymore?