Grahams included on this walk: Sgòrr a' Choise

Parked in the car park beside the visitor centre in Ballachulish, cycled back a few kilometres to Glencoe and locked the bike up in some trees at the roadside. Probably only saved about 1/2hr in the end though.

Set off down the Gleann-leac-na-muidhe road and took the detour at the sign to avoid going through the gardens of the houses. Back to the road then through a farmyard after which the road stopped and became a track. Think the ice axe was likely to be a bit superfluous today.

Reached the Allt na Muidhe which wasn’t difficult to cross.

Initially followed to the left a fence uphill before heading west and south to the side of a ridge. Was following a faint path before starting more steeply to gain the ridge. Went up a gully which looked doable but couldn’t quite make the last bit so had to drop down a bit then back up a little to the south. Success this time and got up on to the ridge.

Westwards to the summit

BEB - Stob Coire Raineach in the distance (I think)

Beinn a’ Bheithir on the left, Sgorr a'Choise mid right

Fraochaidh looking rather far away

Set off northwards following an old line of fence posts

Down past the trees then back uphill to Sgorr a'Choise

Stopped at the summit for an early lunch. Very nice and warm in the sun so lay back for a snooze – hadn’t intended to but must have dozed off for quite a while before waking up – spent a little too long up there and still had quite a way to go so got ready and set off.

Straightforward, if a little steep at times, descent down to meet the path up from Ballachulish

Final up and down before the summit

Could just see Ainshval, Askival and co in the hazy distance (click to enlarge)

Self portrait (absolutely no need for an ice axe today…….) 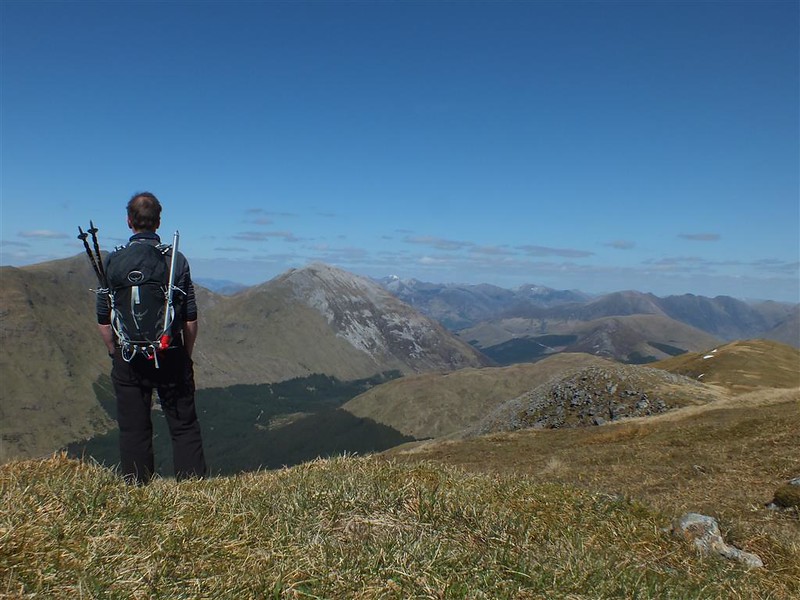 A couple of zoomed shots

Reluctantly started back on the long return route – more ups and downs to get back to the track which then drops down into Gleann an Fhiodh and alongside the river.

Back to the car park in Ballachulish. It had taken quite a bit longer than expected – lot of stops for photos and falling asleep after lunch probably didn’t help.


Ballachulish 14may2016 activelog.gpx Open full screen  NB: Walkhighlands is not responsible for the accuracy of gpx files in users posts

That's hillwalking at it's best

Who said Corbetts and Grahams are dull?

I'm tempted to do Fraochaidh from Ballachulish, too - will save us a bit of driving.

"Hula face" looks unbelievably steep, I can't believe we went up that way

BlackPanther wrote:I'm tempted to do Fraochaidh from Ballachulish, too - will save us a bit of driving.

A long but brilliant looking day RH - May has been a great month to be out in the hills.

Nice route, that looked a cracking day. The bike might have only saved you half an hour, but I would much rather cycle the A82 than walk along tarmac.

You've given me some routes to consider now

I too enjoyed these tops in from Kinlochleven and the contact with the surrounding hills visited in another lifetime...not in one trip though and of course being me I didn't know about the wee Elsie.

The long lens also gets you into more distant hill groups as an extra bonus.

Laughed out loud at your wee snooze

I've never found a rock that's comfy enough for that

This is a very fine piece of reporting RH!

Camera worked well for you on this walk Rockhopper

As BP says; it don't need to be high to be a lot of fun

Good route - I like the idea of linking Fraochaidh and Sgorr a' Choise like that. Both are must-do-again hills for me. And impossible to go wrong with the weather that weekend. Hope you didn't wake up with loads of sunburn