This was a warm up for a longer walk next month. Having been out most weekends over the winter I needed to know if the legs were ready for consecutive day walking and probably more importantly, how would the boots do and would they be kind to my feet.

No reason to give any great detail on the route as it can be found on this website (I took the notes with me but didn't need them as the signage is very good).

A fantastic start, warm sunshine and the gentlest of breezes as I left Kincardine. The vast majority of day 1 is on a tarmac cycle track which was especially busy with cyclists between Kincardine and Culross (but it was a Saturday).
The small villages of Culross, Charlestown and Limekilns were the highlight of the first part of the walk to Rosyth and the last mile in to Culross had uninterrupted views across the Forth.

I spent a while around North Queensferry as there are now three bridges to photograph and I seemed to have a need to take shots from every angle. I stopped at Port Laing for a sandwich and some chocolate, a really peaceful spot with great views.

St Davids and Dalgety Bay were passed before the final stretch in to Aberdour past the golf course.

Good first day, brilliant weather, feeling good and feet in good shape even allowing for all the tarmac. 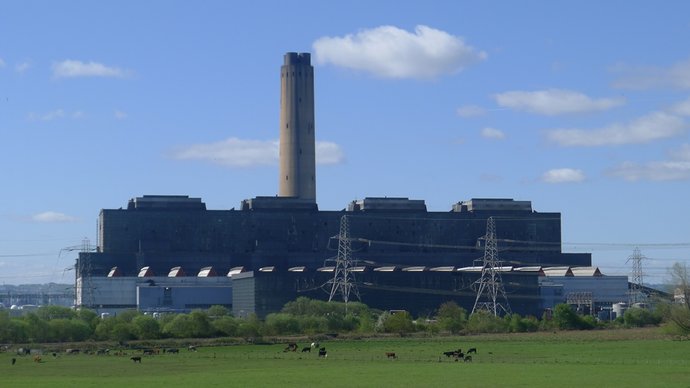 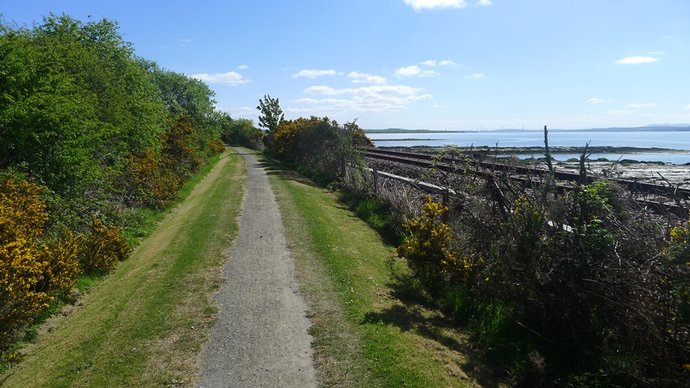 Heading for Culross with the bridges way off in the distance 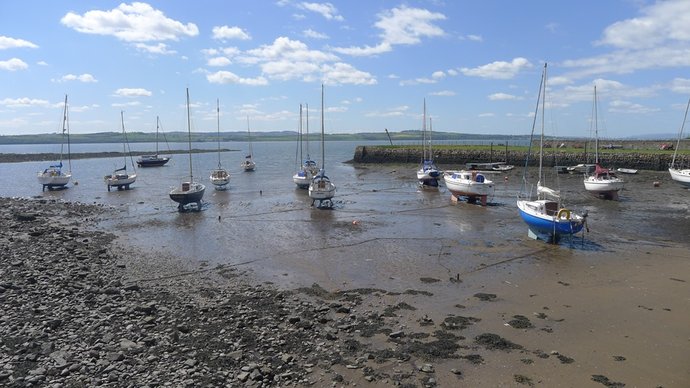 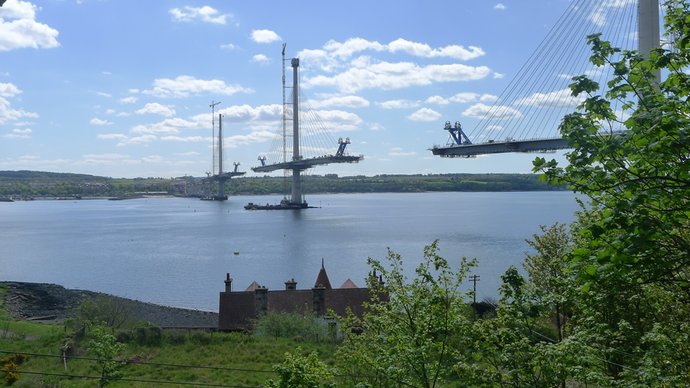 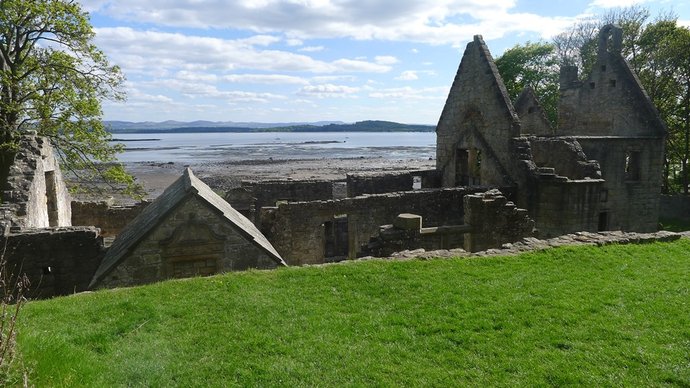 Another fine day of weather.

Aberdour to Pettycur was really enjoyable and again the path was close to the shoreline most of the way. With the tide in I had to leave the coastal route and follow the path by the A921 to reach Kinghorn which was disappointing but no great hardship.

I had wondered what it would be like to walk through Kirkaldy but with a long wide esplanade it was fine and I enjoyed the villages of Dysart, West & East Wymess as well as Buckhaven before reaching Methil. Like Kirkaldy I assumed in advance that I'd feel like a bit of a plonk (walking through Methil) and at times I probably did, but then, coming towards me in the opposite direction were a couple of walkers using poles and suddenly I didn't feel so bad.

In the late afternoon sun the walk from Leven along the beach to Lower Largo was a bonus and a great finish to the day.

Not as much tarmac as day 1 but still quite a lot. Feet still seem to be in good shape after 2 hot days. 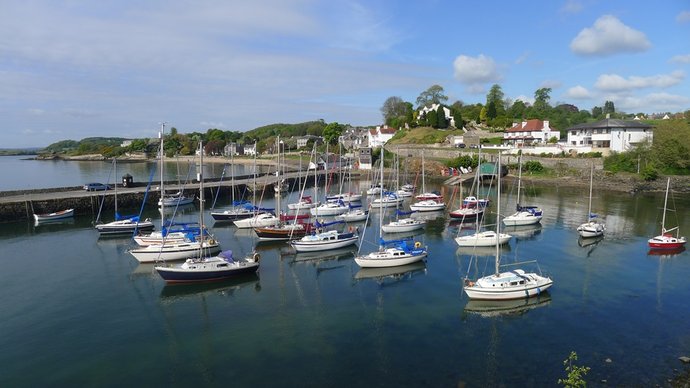 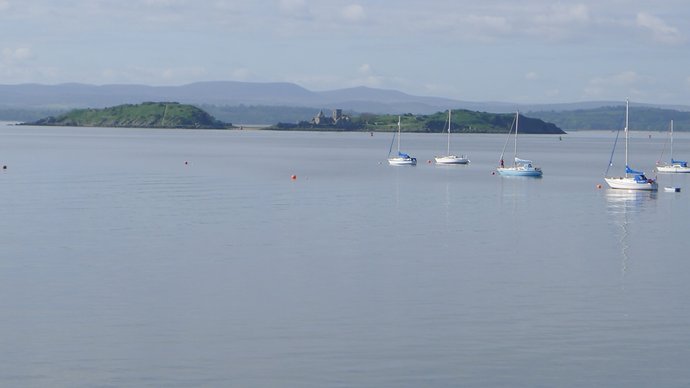 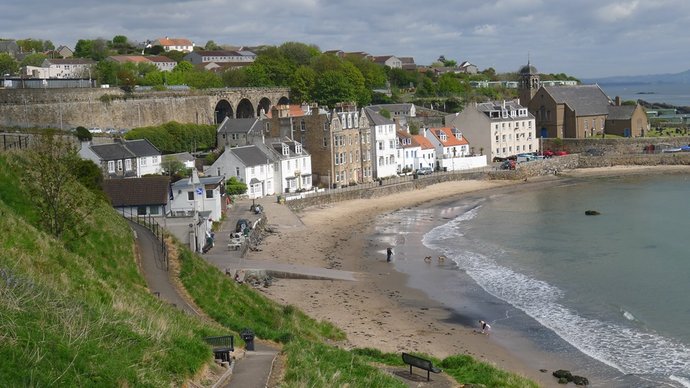 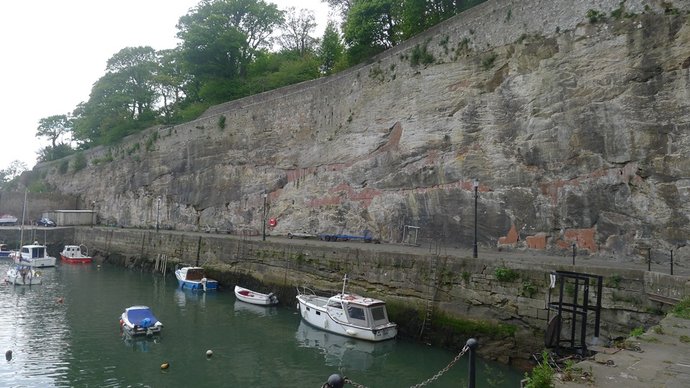 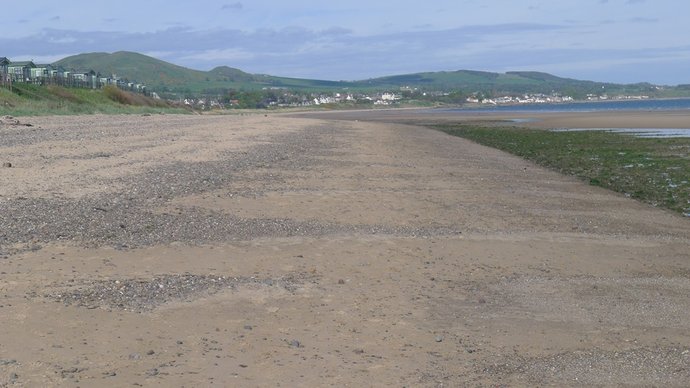 Beach walk to Lower Largo with Largo Law in the distance

It's a cooler start this morning, a little bit of high cloud and completely flat calm.

I found the first 3.5 miles really, really hard work - probably the toughest section for me of the 5 days. The narrow path along the dunes was undulating and with deep soft sand it felt like a real slog but once I crossed a couple of old wooden bridges and bypassed a holiday park the now grassy path returned to firmer ground as it circled a field keeping close to the rocky shore before I climbed a grassy hill with views to Earlsferry and Elie from the top.

St Monans with it's salt pans was interesting and I enjoyed walking through Pittenweem but arriving at Anstruther during the local school's lunch break and pesky tourists everywhere I decided to pass the shops when I really should have picked up more liquids.

The path from Anstruther to Crail couldn't have been any closer to the coast and was relatively flat. Crail as always was fairly busy but enjoyable none the less. At the end of a long day in the sun I rounded Fife Ness and walked along the side of Kingsbarns Golf Club (which looked immaculate but not sure I'd be happy to part with £225 for a round

) to the far end of Cambo Sands where I followed the road from the car park up to Kingsbarns.

Too much sun and not enough sun cream today so I was a bit burnt by the end. This was my first day where I had foot problems with various toes competing with my big toes to be the widest - Compeed time. 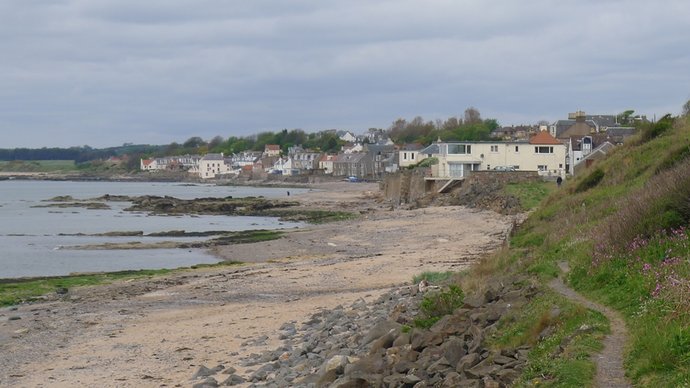 Looking back to Lower Largo 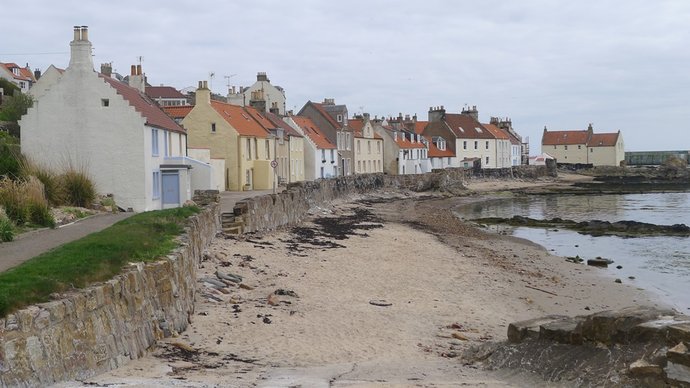 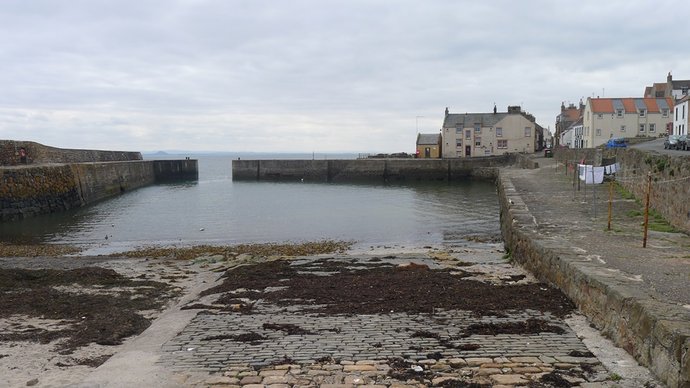 Cellardyke Harbour (the other one in Anstruther that nobody goes to) 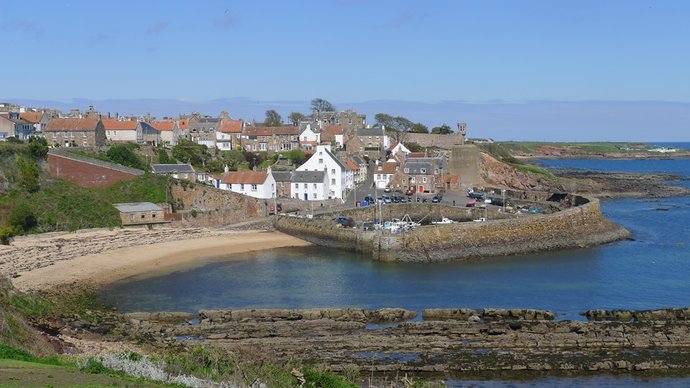 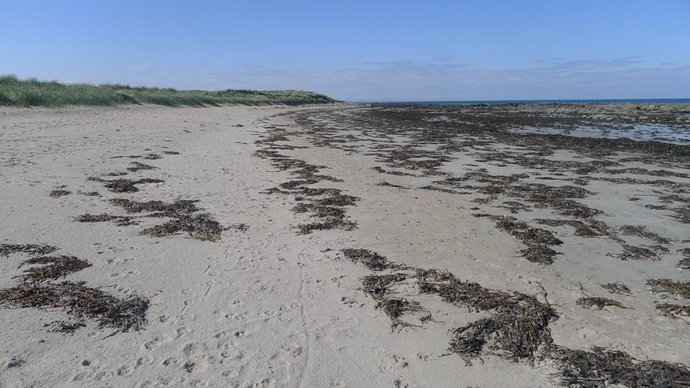 It's feeling like Groundhog Day - blue sky, warm sunshine and a gentle breeze.

I don't want the coastal part of this walk to end and today feels like the last day with tomorrow being back to an estuary but this time the Tay. It's a great little path along the coast line past Babbet Ness before heading inland and returning to the coast at Buddo Rock. The walk to St Andrews feels quite lumpy but luckily the tide is out so no problems at the point where a crossing isn't possible at high tide.

St Andrews was a shock to the system with peeps everywhere, all of them well layered up and giving quizzical looks to the weirdo with the short sleeved thin summer top walking in their midst. After the Golf Course Hotel it's back to a cycle way to Guardbridge but the bonus for more tarmac (and worsening feet) was a burger van between Guardbridge and Leuchars where I picked up more liquids and a cheeseburger that was finished within 50 yards of leaving the van behind. It felt a bit strange walking through Leuchars with the high fences topped off with barbed wire but before long I was off the main road and heading towards Tentsmuir Forest.

I was treated to my own private air show for the next 40 minutes as one jet took off then circled the area before dropping down to the runway and just before landing would take off again. I must have watched this routine about 7 times before landing.

The afternoon was now very warm and with the sun higher in the sky there was only limited shade in the woods. By now my feet were sore and it felt like it took forever to reach the Forestry Commission car park, not to mention the ice house and finally, finally Tentsmuir Point. Again from the point it took longer than expected to arrive at my right turn that took me out of the wood and very quickly into Tayport.

Four days down and nearly 100 miles covered, all four days have been warm and with more tarmac than I would have liked my feet are suffering and as a result, my pace is dropping. Without supplying too much detail I now have a big toe on my left foot that looks like it has been in the bath for 2 hours too long and is completely milky white, a large blister by the nail of the next toe and a heel blister that needed to be double covered in Compeed. 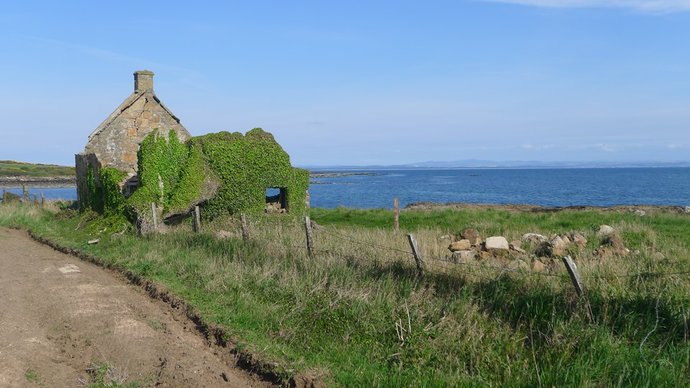 A little bit of work required but what a setting 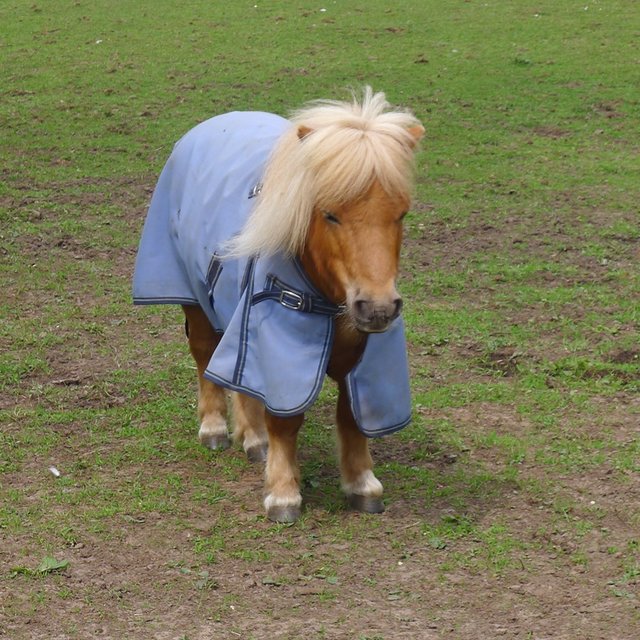 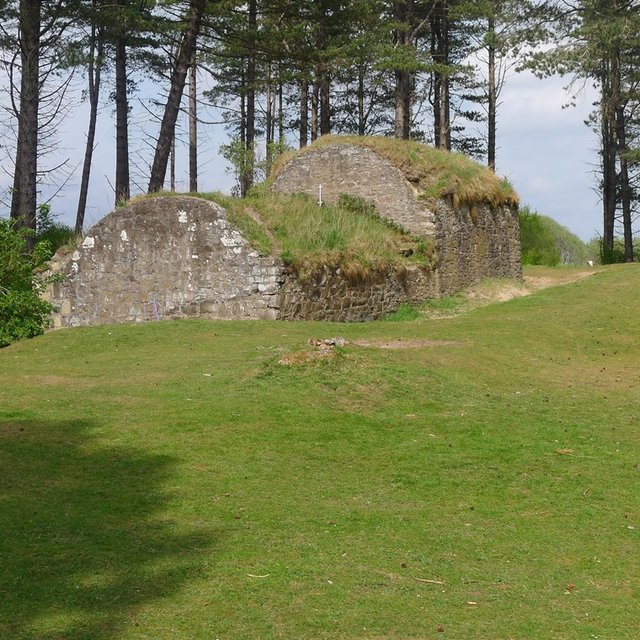 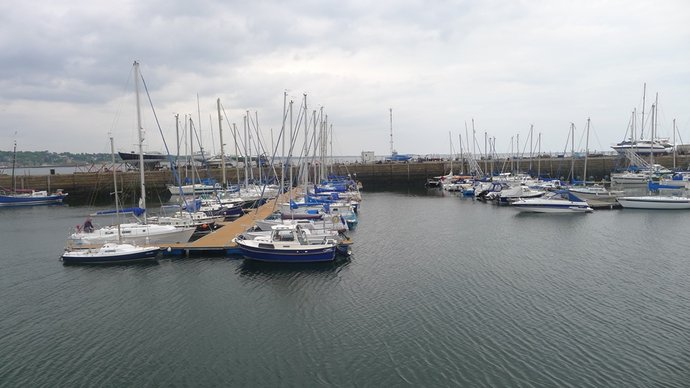 The last day and there has finally been a change in the weather. I left Tayport in drizzle as I headed along the cycle way to Newport On Tay then roads/paths to Wormit before going under the rail bridge and leaving Wormit behind. Leaving Wormit also coincided with the rain stopping and staying off for the rest of the walk.

The path to Balmerino is close to the shore but there is quite a drop down and the route is tree lined so there are only limited views of the river and Dundee.

There are some great looking houses near the shore in Blamerino but as good as they look on a nice day in the middle of May I wondered how nervous I would be during periods of heavy rain or after snow melt.

The path narrows after Balmerino as it continues to hug the shore but the wood is more dense so views are limited - really nice easy walking though. After a couple of miles the path turns away from the river and climbs through the wood then skirts a field to reach a farm track. This track climbs up to a minor road which means another 2 or 3 miles of tarmac before heading off in to farmland near Norman's Law.

After a further 6 miles the path comes out of the farmland on the outskirts of Newburgh before heading down to the river for one last time for a really pleasant last mile along the bank of the river then past a tiny little harbour before climbing through a park to the official finish. For the last mile the sun was back out and it was warm once again.

24 hours on from finishing (looking out the window at mist and rain) I have to say that this was a really enjoyable walk, far more enjoyable than I had anticipated. It has to be said that there is a lot of tarmac (especially in the first couple of days), a number of holiday parks to walk through, a few golf courses where the path is on the edge of the course and a couple of large towns to negotiate but these are just minor negatives on a walk with lots of variety, great scenery and lovely coastal villages.

I now know my fitness for next month is OK after covering 119 miles in 5 days but I also know that the boots I used are fine for single days out in the hills but they are not the answer for consecutive days so I need to find an answer to that problem in the next 3 weeks. 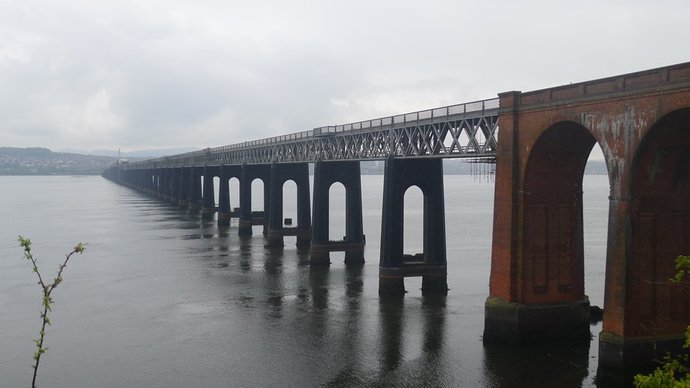 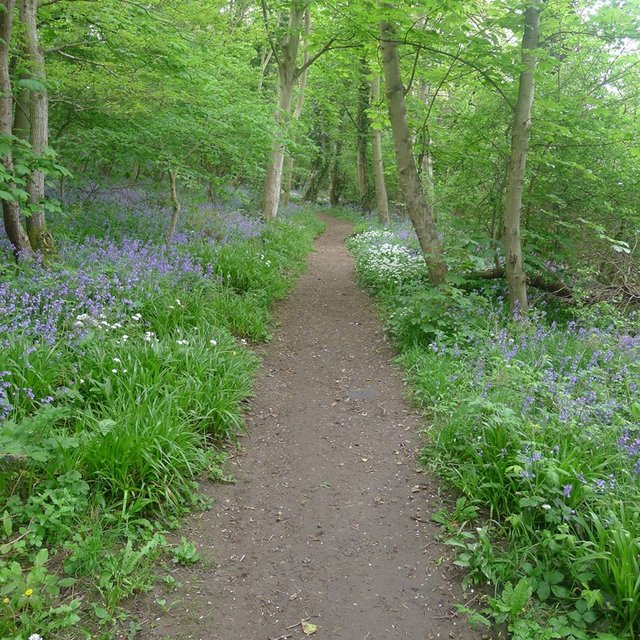 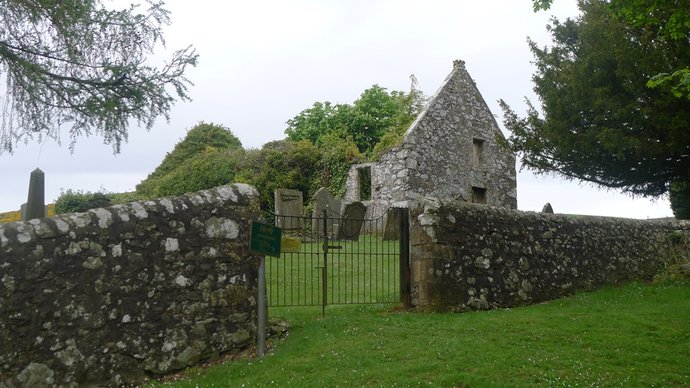 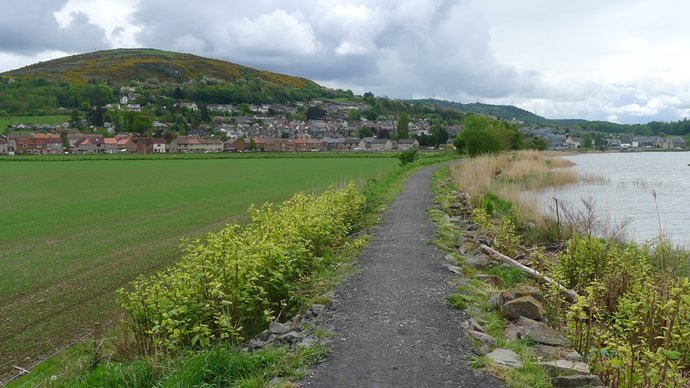 Very interesting - hadn't realised there was so much around here and you definitely hit the jackpot with the weather - must be quite a walk you're planning if this is a warm up !

rockhopper wrote:Very interesting - hadn't realised there was so much around here and you definitely hit the jackpot with the weather - must be quite a walk you're planning if this is a warm up !

Hi RH - definitely visited one or two places I'll go back to when I have more time to properly wander around.

Next month is nothing special. I've been increasing my mileage on long distance walks year on year since 2012 and last year I did the Pennine Way. My distance on that route finished up at 282 miles so I decided that from now on I would try and stop increasing my mileage and prove something to myself and instead I would just go where I fancied, irrespective of mileage. So this year it's back to Yorkshire to visit some of the route I was on during the Coast to Coast in 2014 plus some coastal walking as well.

If the weather is half as good as last week I'll be happy.

a superb report... well done looks like yous had a great time... can i ask you about wild camping spots or if theres any reasonable cheap accommodation enroute.. many thanks Julie