First Munros for me since October last year and with the weather forecast for West Highlands looking spectacularly good I decided on Friday night to make an early departure from a rainy Aberdeenshire and head for the Mamores first thing in the morning. Stob Ban and Mullach nan Coirean seemed a good route to get me back in the swing of things. Did a little warm up on Ben Rinnes last weekend, but was very much looking forward to getting out for a longer trek today.

So at 05:30 off I set. Arrived at Lower Falls around 08:30 after a nice quiet drive over from the east. It was still cool in Glen Nevis, but the skies were clear and it looked like a cracking day ahead. 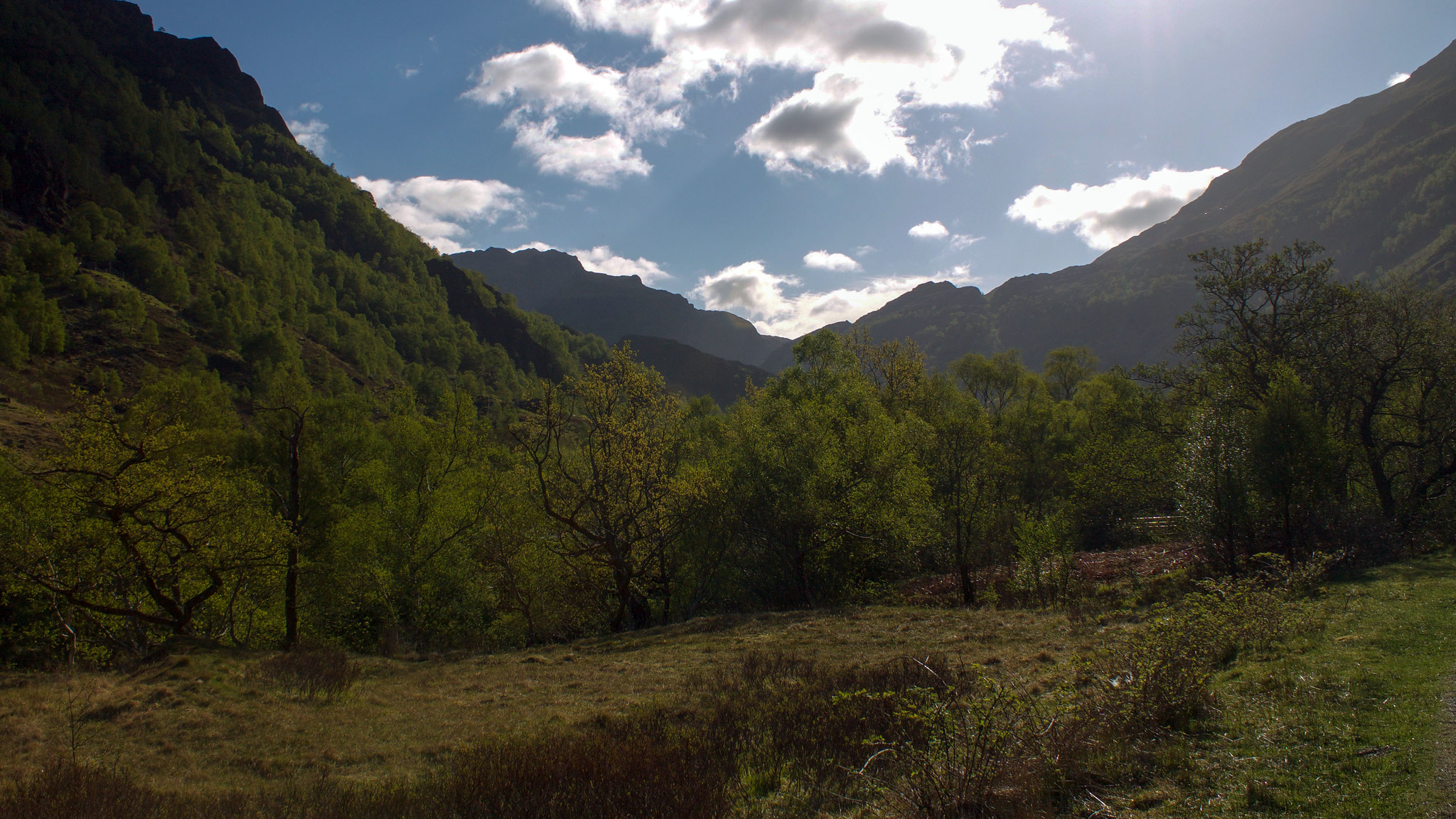 A quick stop to take in Lower Falls (a spot I used to visit often in summer time as a teenager living over here) and I was soon off up the track and heading uphill. The initial climb up to around 200m passed pretty quickly on a pretty rutted path, at which point I stopped briefly to take off an unnecessary layer, adjust my rucksack and slap on some suncream. 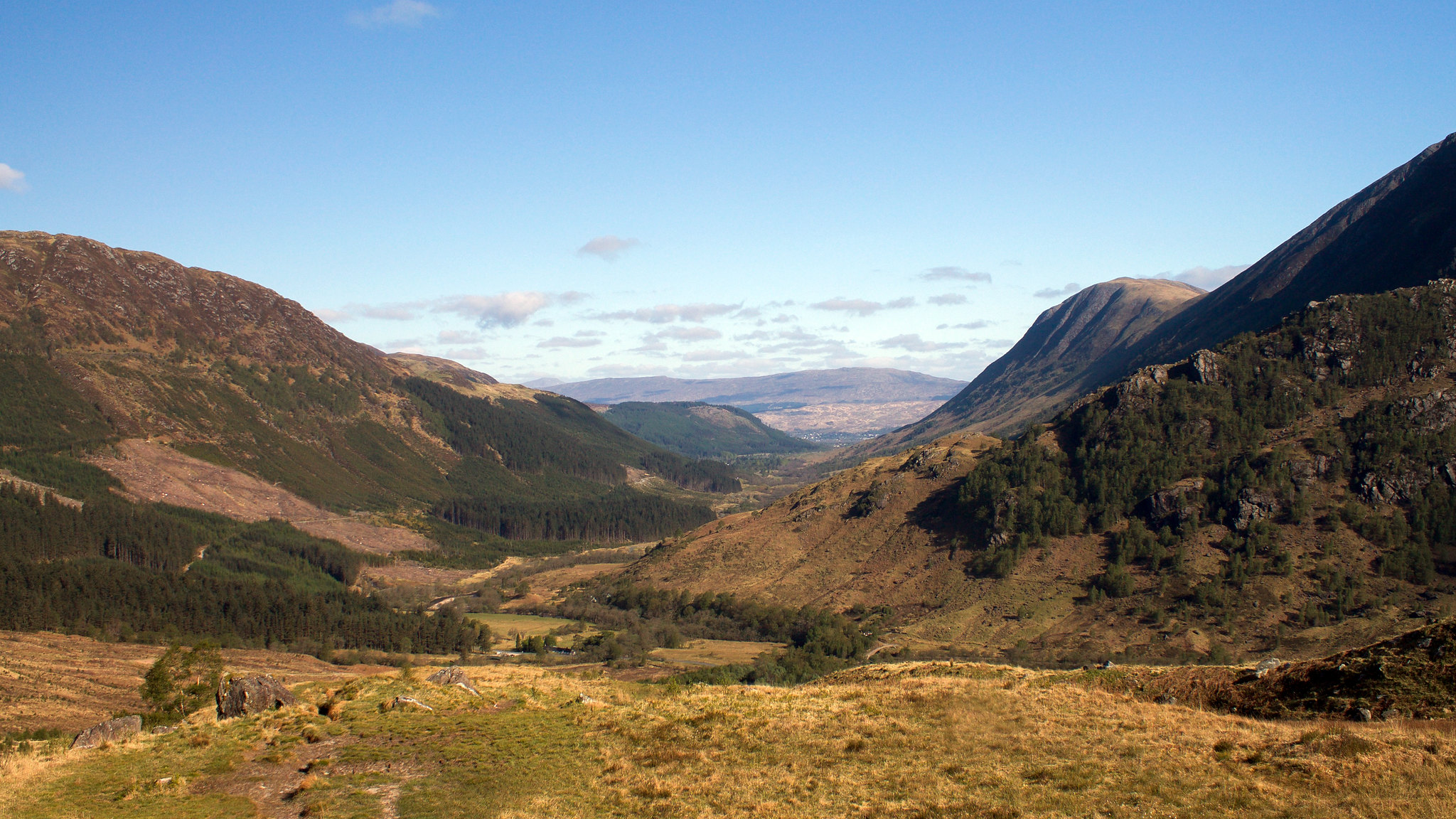 Looking back down Glen Nevis from around 200m

After this initial climb the ascent eased off for some time, heading uphill more gently through the glen alongside Allt Coire a'Mhusgain. I really enjoyed this part of the walk. Easy going, just enough uphill to keep me warm in my t-shirt whilst in the shade of Sgurr a'Mhaim. 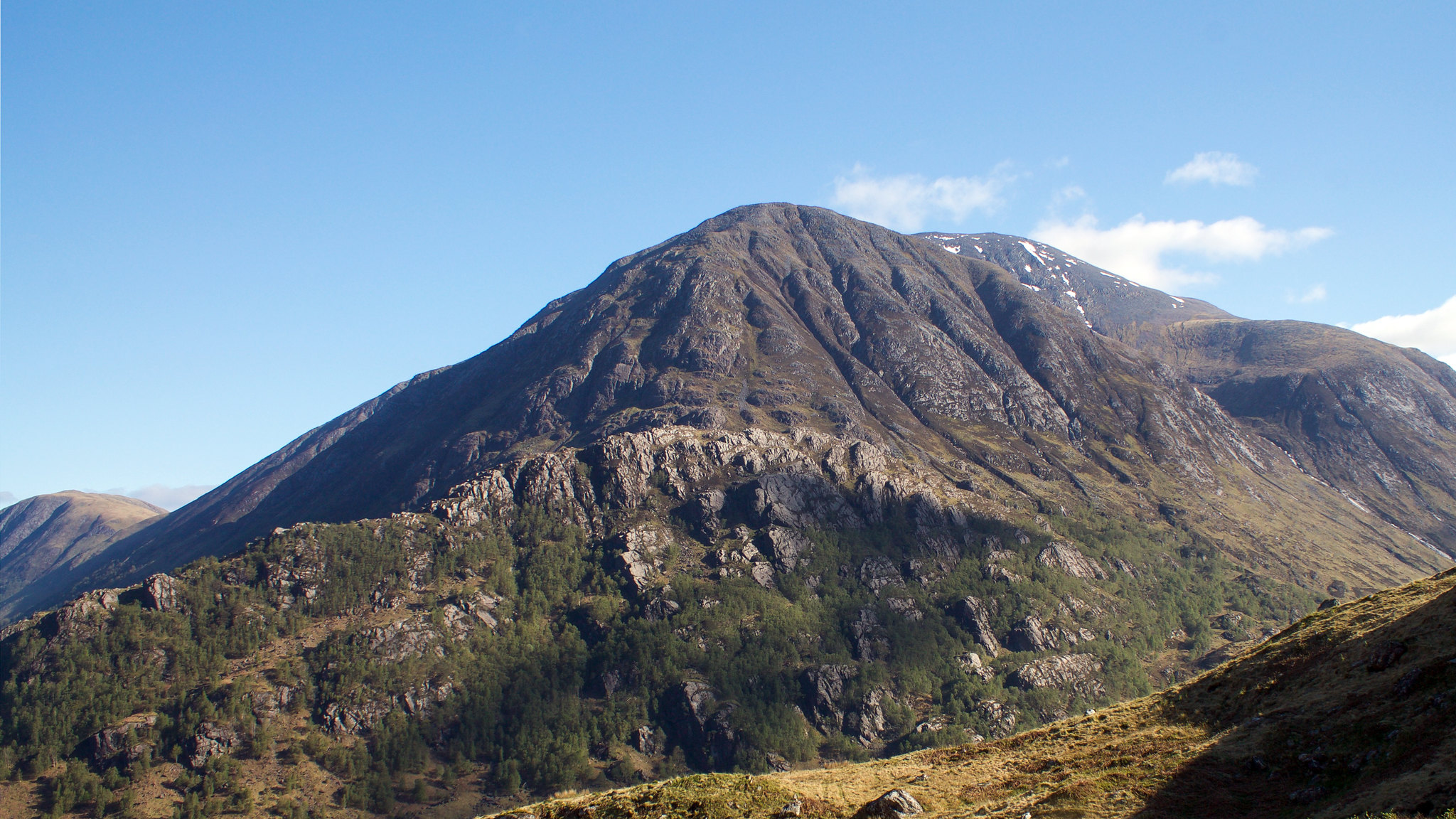 The trees were looking great with new light green leaves making their appearance for the year. 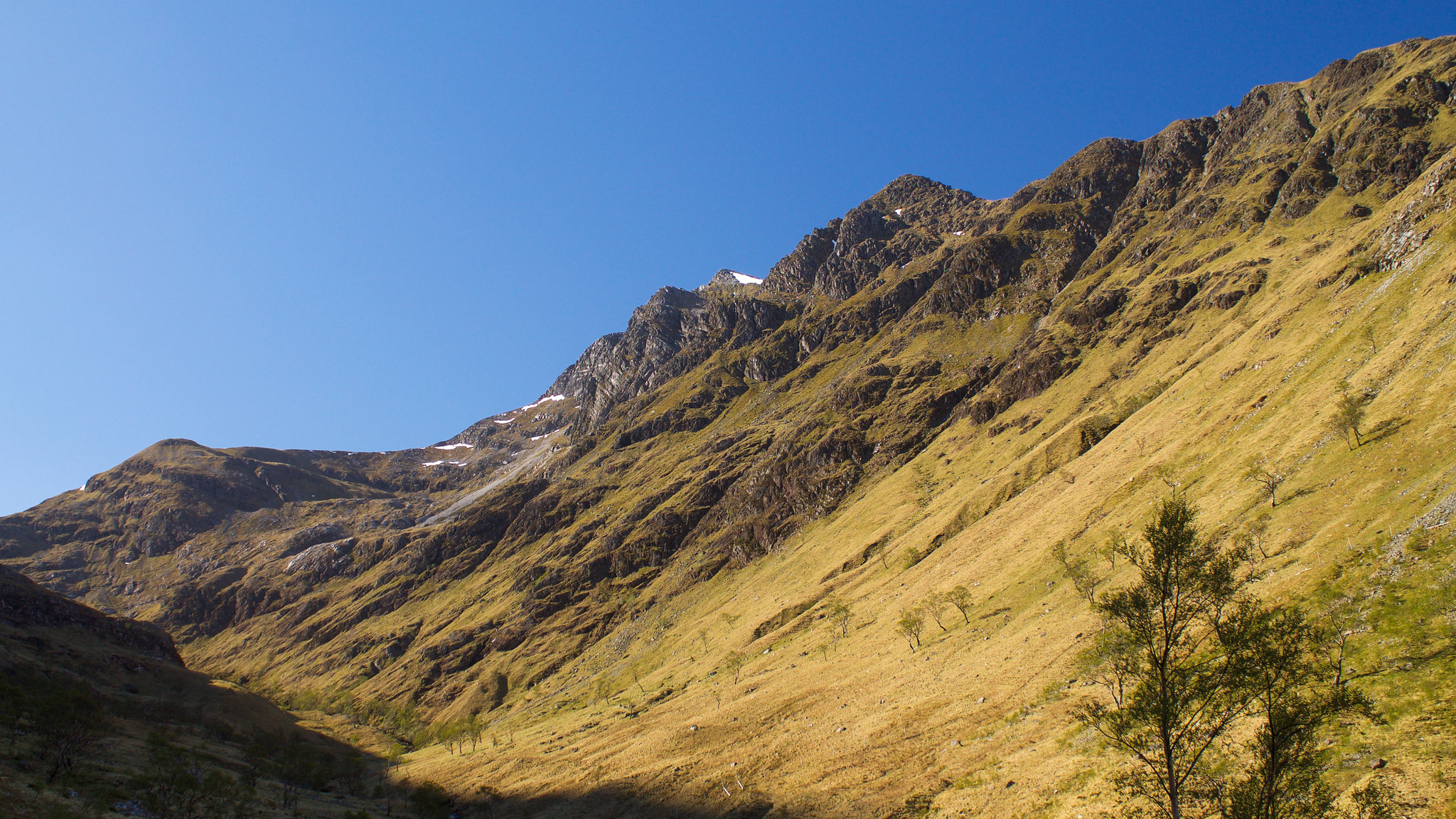 The early part of the walk through sparse woodland

Soon the path turned to the left and started to zig-zag more steeply uphill for a short while, but soon eased of again continuing in a southeasterly direction. Out of the shade now I was enjoying the warmth of the morning sun getting ever stronger. A few little streams were easily negotiated along this part of the walk, and a nice waterfall passed as I got to Coire a'Mhusgain. I decided that just over the 600m mark would be an ideal time to stop for a (second) breakfast (it has been over 5 hours since my first one after all). So I stopped on a rock by the path to sit and munch on some weetabix. Stob Ban was looming large to the west by this point. 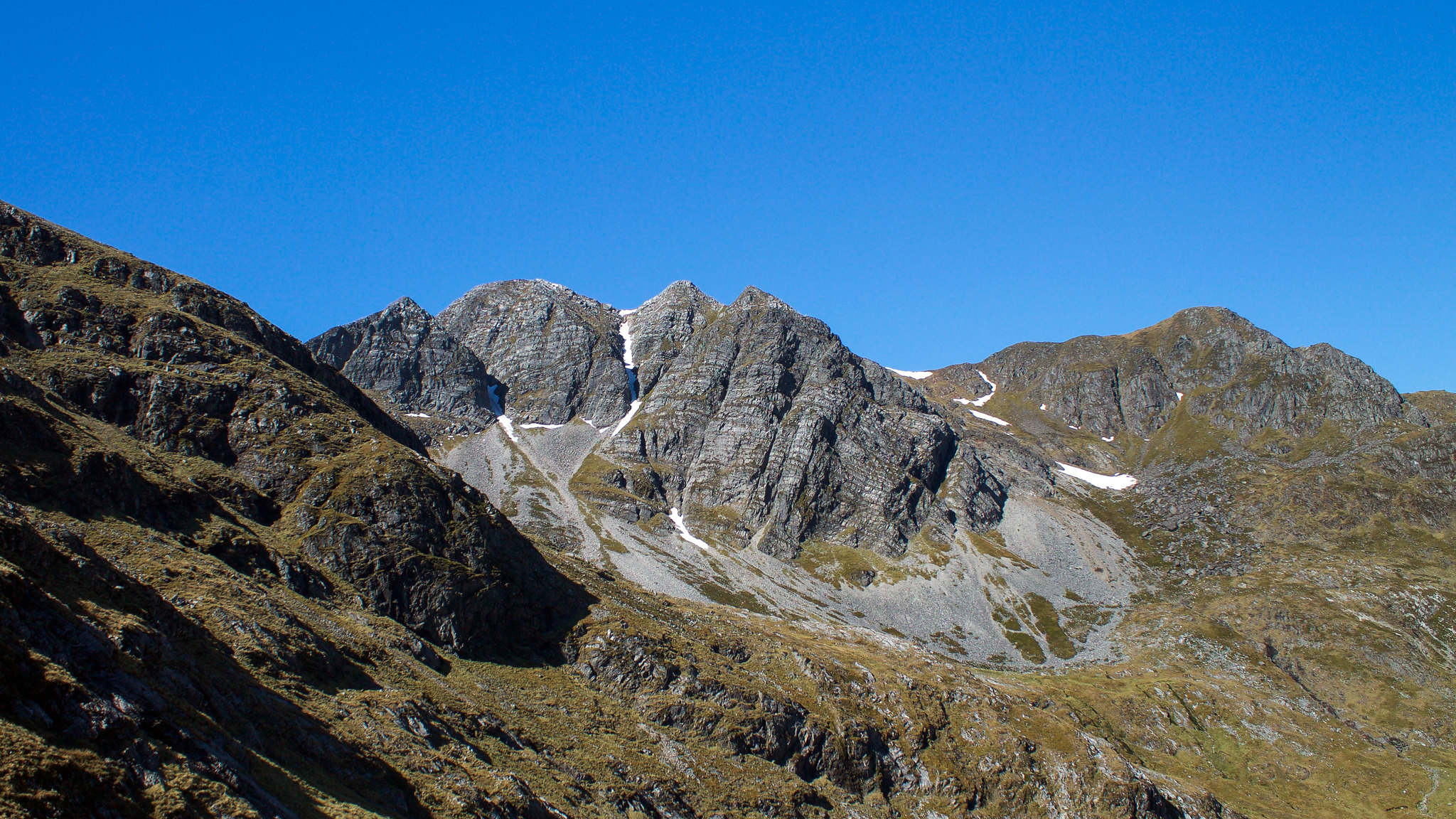 Looking towards Stob Ban from my breakfast stop

After finishing up my quick breakfast I was on my way again, and soon taking a right turn onto the path towards Stob Ban. It then became clear that it was indeed a pretty steep haul to the summit. I have to admit it did look a little daunting at first (I don't know what I was expecting) and I did worry that my vertigo might kick in. 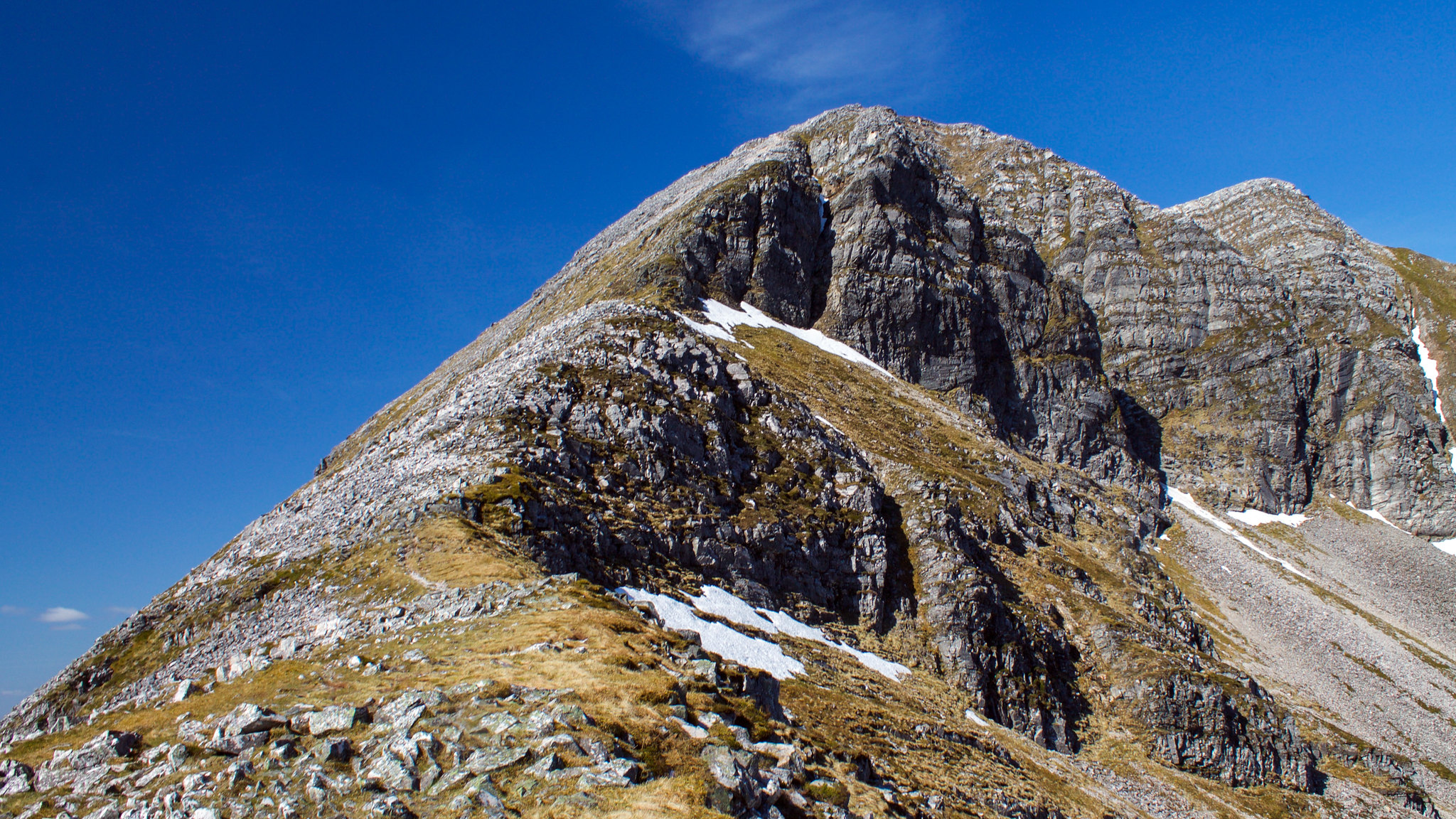 The steep climb up to the summit

However, other than a couple of tentative steps here and there the walk up was pretty straightforward. Steep enough to demand respect, and I did give this part my full attention, taking my time and concentrating on finding a good route up. In the end it was quite straightforward really with the path pretty clear, but I was glad the rocks were dry. A few tracks diverge here and there, but none seemed to veer off too far from one another as far as I could tell. All in all, this part seemed to pass pretty quickly because, before I knew it, the summit materialised in front of me, catching me off guard. A pleasant surprise.

And the views! Quite simply: wow!

The view that opens up when reaching top of Stob Ban

Stopped for a short while to admire the sights from here. I could see off below me a couple making their way up the steep climb towards the summit. They arrived just as I was getting ready to set off again. A quick chat (they were heading straight back down after this) and I was on my way once more, making the steep descent down the other side on far looser scree.

Was glad once it was more solid underfoot and set of on the rather delightful looking ridge walk around to Mullach nan Coirean. I knew that the rocks turned to a pink granite on Mullach nan Coirean but was surprised how quickly it changed around me. 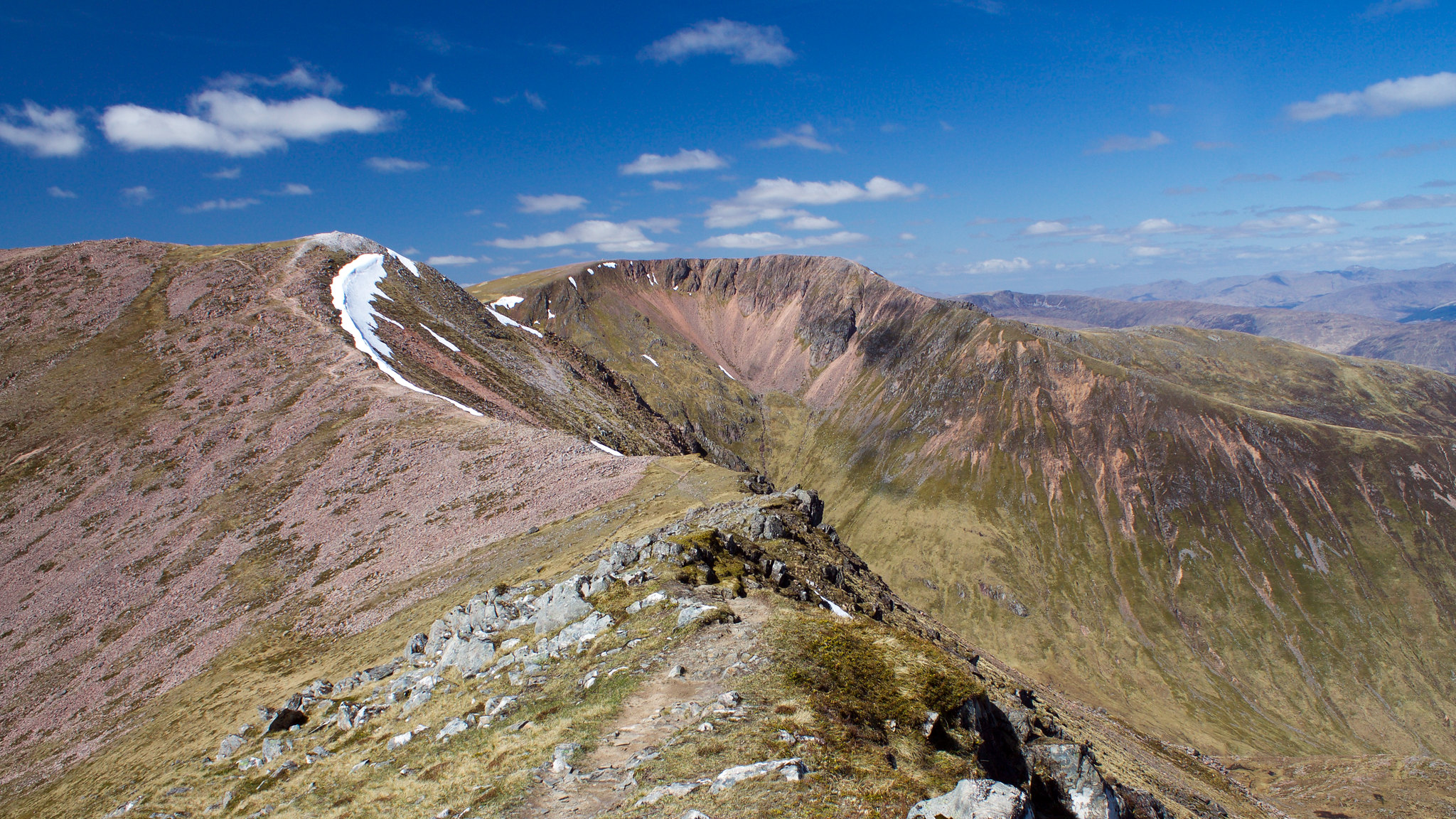 The walk around the ridge really was quite a highlight. The views in all directions were fantastic. The sun was still beaming down, but not overly powerful, so was never feeling too hot at all. What did surprise me was how quiet it was up here. I was expecting quite a few more people up here for such a clear sunny Saturday. I met another solo walker around half way along the ridgewalk, walking in the opposite direction to me, and stopped to chat for a short while. He remarked the same, surprised not to see that many souls up here. Not that I'm complaining of course, I love the peacefulness of almost having the entire landscape to myself. Looking to my right however, towards the summit of Ben Nevis, looked a slightly different story. Many a figure could be seen silhouetted against the patches of remaining snow on the summit up there. I think I prefer it over here! On the ridgewalk I also encountered a solo hillrunner and a group heading over the hills to Kinlochleven. There didn't seem to be anyone following me in this direction.

Stopped for lunch at the small summit at 917m, to the southeast of Mullach nan Coirean. It seemed like a great view towards Ben Nevis. So, so quiet here, hardly a breath of wind either... loved it.

From this small summit there was a small descent before the final climb back to 939m and the summit of Mullach nan Coirean. Indeed not quite as impressive a summit as Stob Ban (or indeed the 917m summit beforehand), but the bigger cairn makes up for it in a way, as do the views towards Loch Linnhe.

Again, stopped for a while up here just to pass the time. I wasn't in any particular rush to get back down again. Waited around until another couple appeared on the summit (so there is someone going the same way as me today

), said a quick hello and left them to enjoy the summit.

The descent back down along the ridge was enjoyable. Steep and rocky much of the time, but the views ahead were great. The stretch following the fence towards the forestry, and then through the chopped down forest, weren't quite as much fun, but didn't pose too much of a challenge.

Soon I was in the forest for the last stretch, quite thankful of some cool shade by this point. It wasn't long before I was back at the car. Fortunately no need to race back to Aberdeenshire this evening, with a night at my parent's house near here quickly arranged.

What great weather! What great views! What a walk! Fantastic. 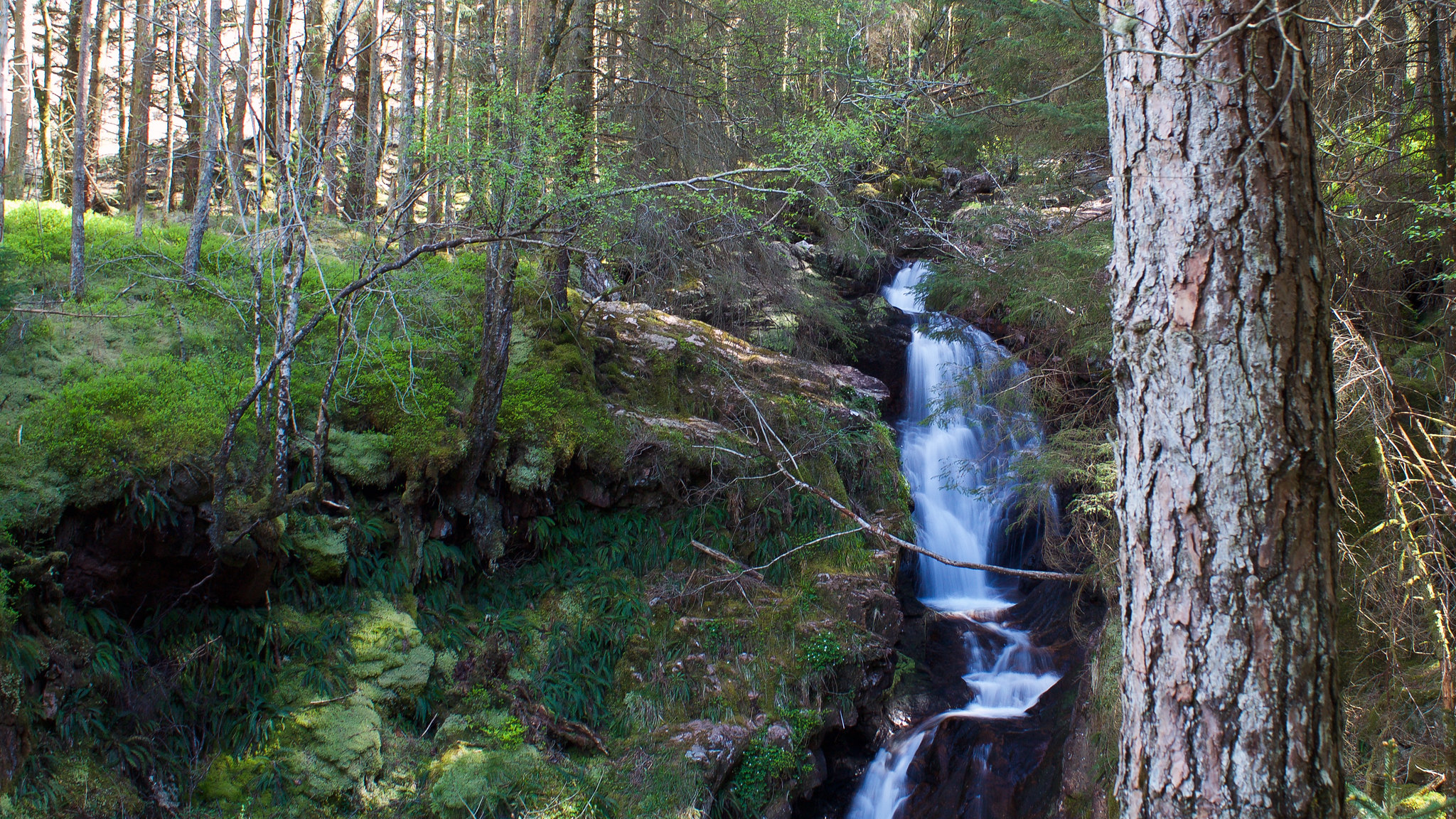 Waterfall at end of walk

can only hope to get weather like yours - cheers

Great photos...just makes you want to go there!

rockhopper wrote:great set of photos - an area to which I need to return having seen almost nothing first time around

can only hope to get weather like yours - cheers

Thanks Rockhopper. Weather was so much better than I could have hoped for on that trip.

Thanks StevieC. I have one of the pictures as the backdrop on my computer at work and I do indeed want to go back there when I see it on the screen