What makes a perfect hill...... Cul Mor has it all

What makes a perfect hill...... Cul Mor has it all


I think it would be true to say Moira and I have wanted to climb Cul Mor since we saw it from Stac Pollaidh in 2012. It looked stunning that day and was firmly on our list and I'm not sure why we didn't get round to it sooner, except that the time never seemed right and that's the way we are with our hills. 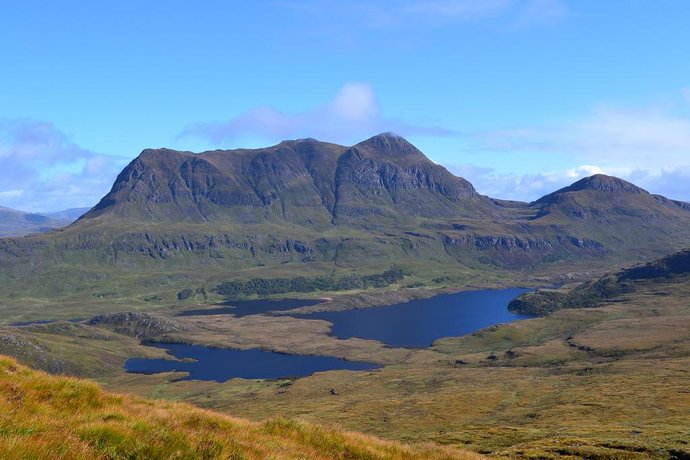 Many on Walkhighlands have made the comment Assynt is their favourite part of the Highlands. So what makes Assynt so special? Cue for a short digression to a bit of geology about Assynt!

From what I've read, rock formations in Assynt date back over 3000 million years, but the landscape seen today is much younger and was sculptured by glaciers during the ice ages. The oldest rock, Lewisian Gneiss, provides a base layer of low hills and scattered lochans, but rising from this gneiss landscape are huge upthrusts of Torridonian sandstone (occasionally capped by quartzite) that resisted the glacial erosion. These hardy survivors are the mountains that make Assynt so distinctive and can be seen in the sandstone monoliths of Stac Pollaidh, Cul Mor, Cul Beg and Suilven standing proud above the surrounding landscape.

Last November we climbed Cul Mor's smaller neighbour Cul Beag - memorable in many ways, not least that we saw our first Brocken Spectre and a white tailed eagle.

Then the day came - Friday 13th May - when we would finally climb Cul Mor and it was in our opinion the perfect hill.

I know these things are subjective and we probably all look for different things in our ideal hill but here's my case for Cul Mor being up there with the best. And it's not even a Munro, suggesting height's not everything!

First off it has a dramatic profile, drawing you in to explore its contours. Even from the road it looks good. It has good parking at the start with public toilets close by at the Knockan Crag Visitor Centre. From the layby you step through a gate and are immediately on to a well made stalkers' path. These stalkers knew what they were doing when they built their paths and this one has been well maintained and was remarkably dry when we walked it, with only a few muddy patches that were easily avoided. 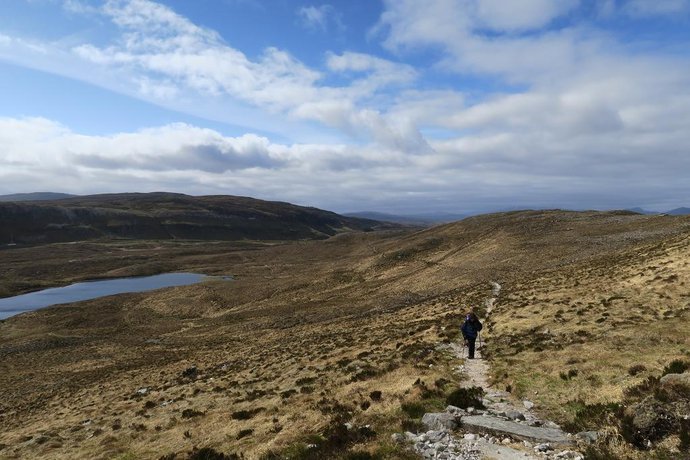 Views are good from the off - and on every side. And thanks to the good path and gentle gradient you can enjoy them as you walk. Some prefer a steep climb from the start but there's something to be said for getting yourself going on the level before the hard work begins.

Views from the start - Suilven and Canisp 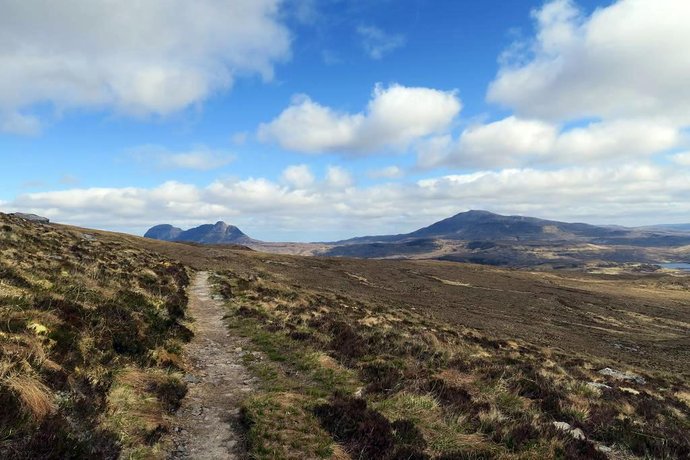 For most of the way up there's a clear path to follow but where the path is less clear on the south east shoulder a line of small cairns show the way.

Cairn marks where to turn up the SE shoulder 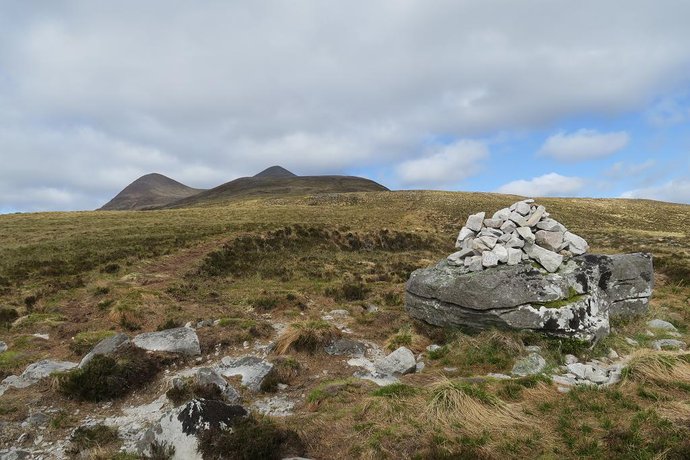 WH warns that the path deteriorates in the boggy sections but we found the black peaty sections were so dry we could walk straight across and pick up the path again on the other side. I appreciate it won't always be so easy. 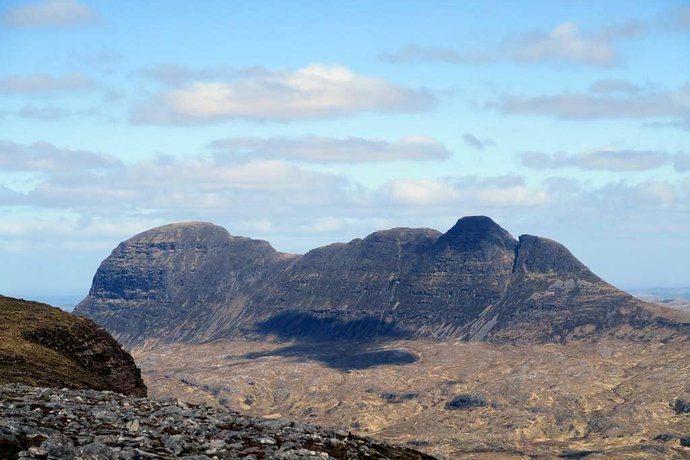 Near the point where you branch off to the right to reach the NE shoulder, Cul Beag suddenly appears, bringing back great memories of the day we climbed it and giving a view of the side we'd not previously seen. 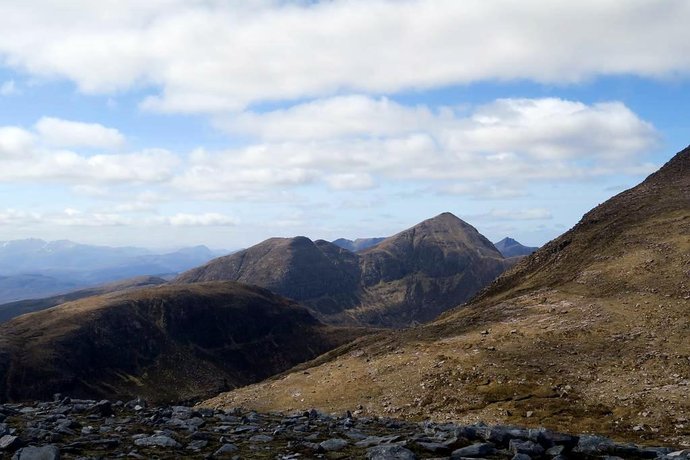 Another ingredient of a perfect hill is the option of having a different descent route. We were going up the north east ridge and planning to come down via the grassy coire between the south and north tops. It's good to have a choice and be able to experience the different aspects of a hill. 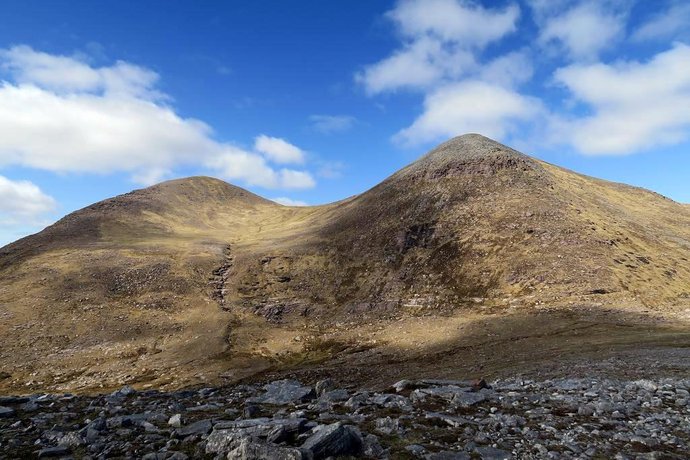 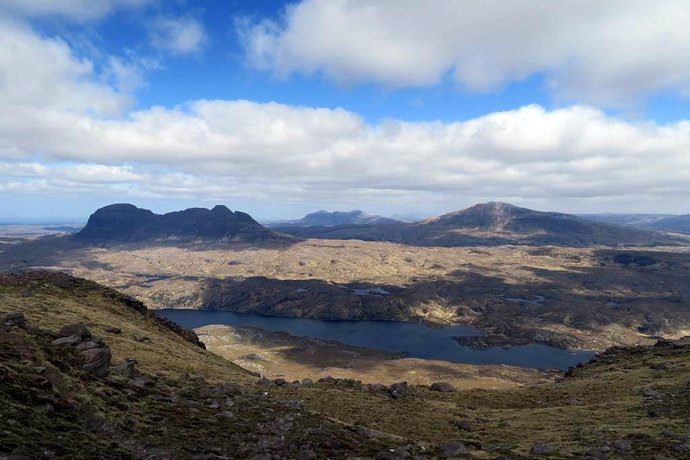 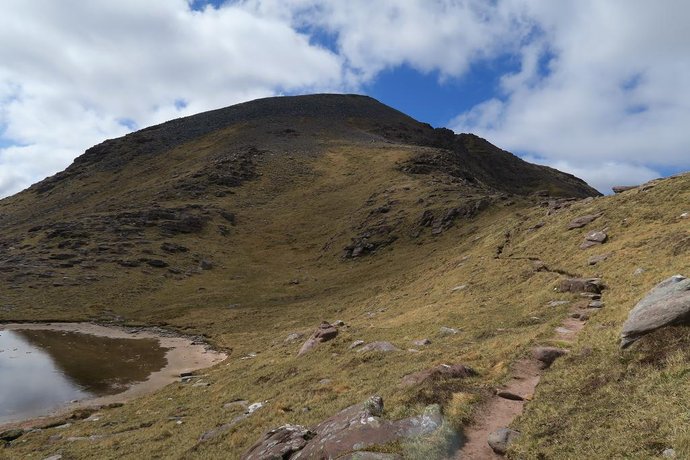 Personally I love hill lochans and watery views in general. In that respect Cul Mor has loads to offer.

A myriad of lochs and lochans at different levels 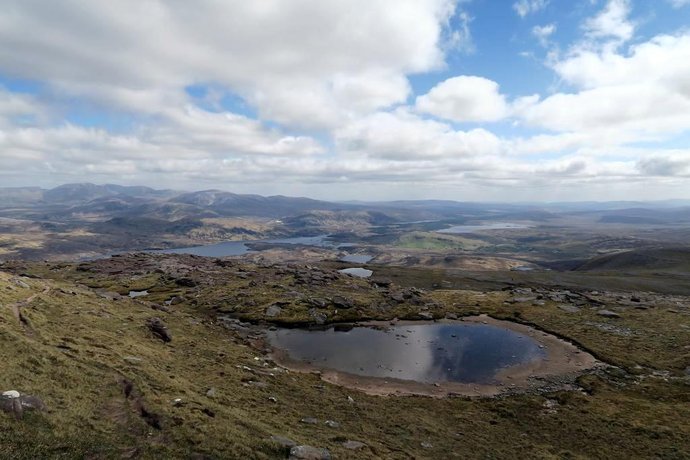 Hills on Scotland's west coast are the best with their stunning views out to sea to a jagged coastline and distant islands in the haze.

Stunning views out to sea 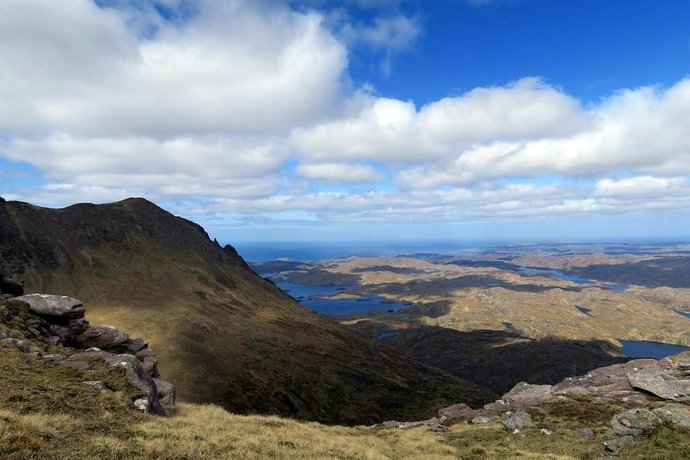 With its weathered Torridonian sandstone this hill has character. 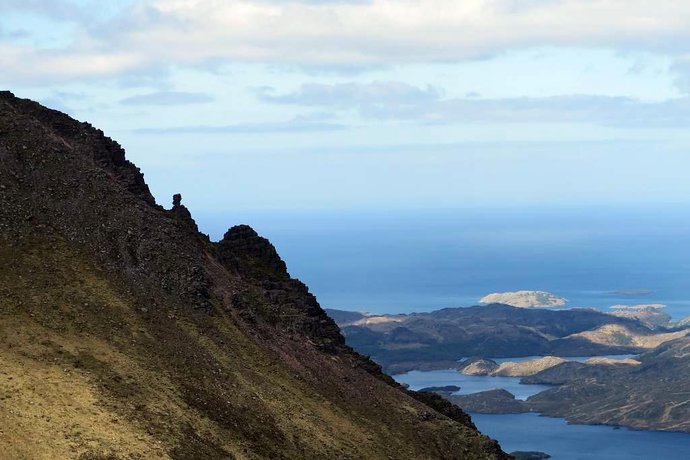 Just enough of a scramble up boulders to make it interesting - but not enough to be a problem.

This was steeper than it looks! 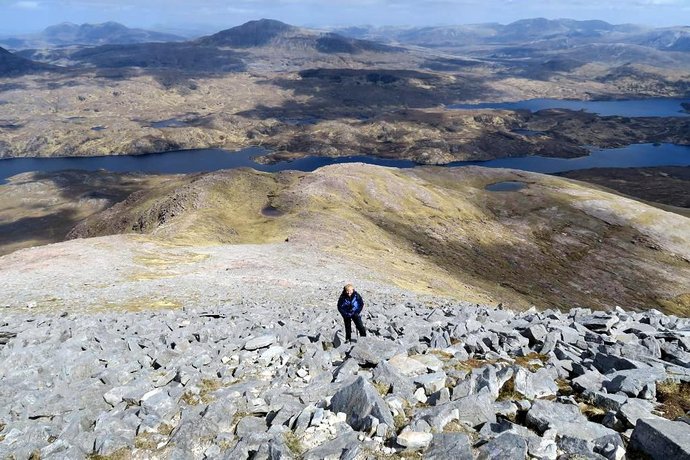 New views round every corner - this one looking south to Coigach 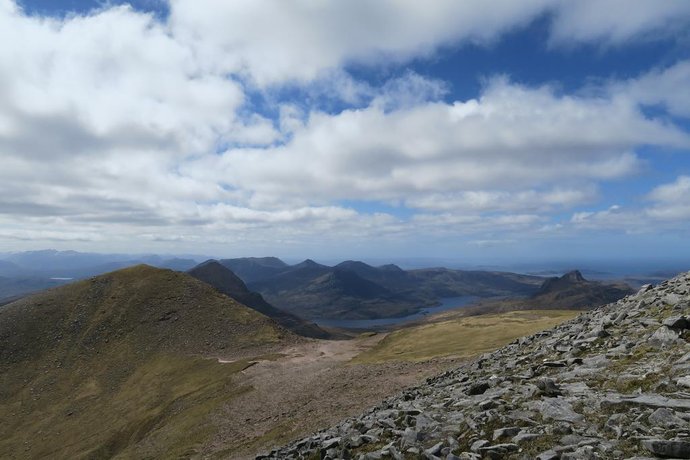 At the summit we met a couple from Connecticut who had left the car park as we were booting up. They didn't have a map and were relying on their phone so we gave them a printout of the WH route which they followed in a clockwise direction and we met them again at the top. We also chatted with three up for a week's holiday from Durham. There's a shelter as well as cairn and trig point at the top but on a day like we had there was no temptation to sit in the shelter - the views all round were just too good. 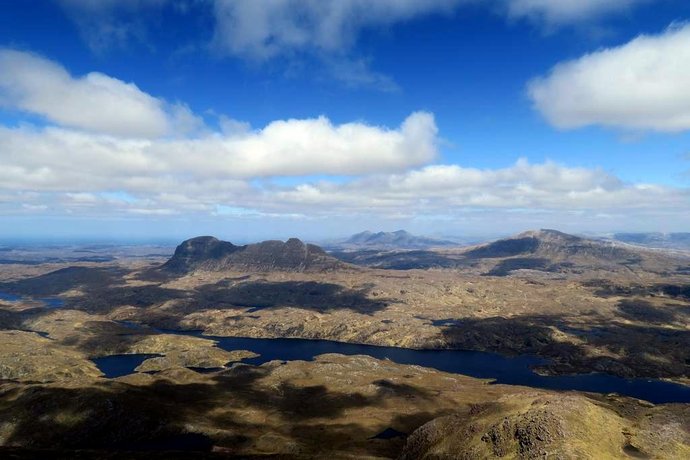 Another shapely neighbour - zoomed to Quinag 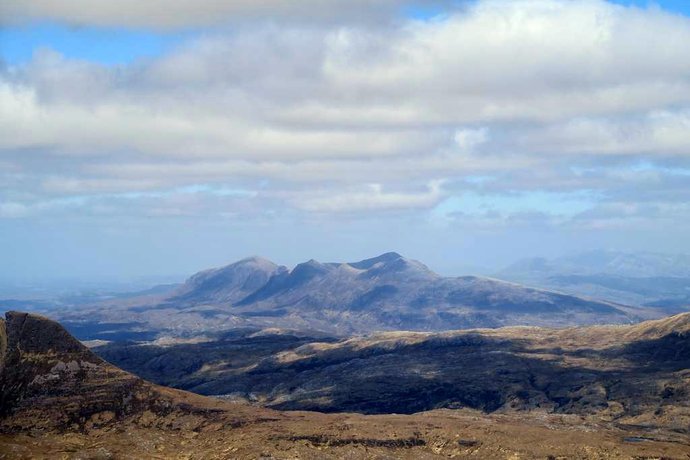 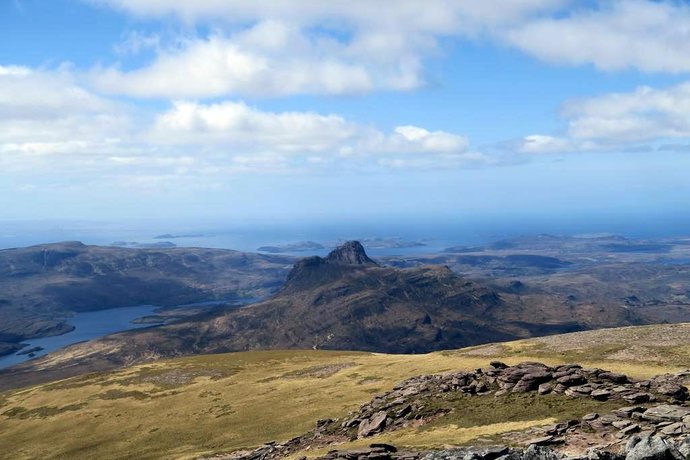 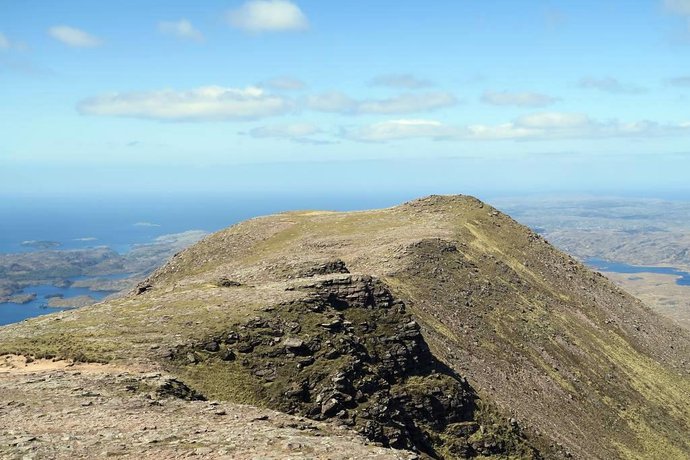 We continued west down the ridge with its sculpted outcrops and pancake rocks which are great for sitting on for a fly cup and walked out on to Sron Gharbh, making for a rocky viewpoint with a perpendicular drop into the watery wasteland below.

To my mind every hill of significance has cliffs and Cul Mor's are tucked away out of sight from the road and a reward to those who venture in. 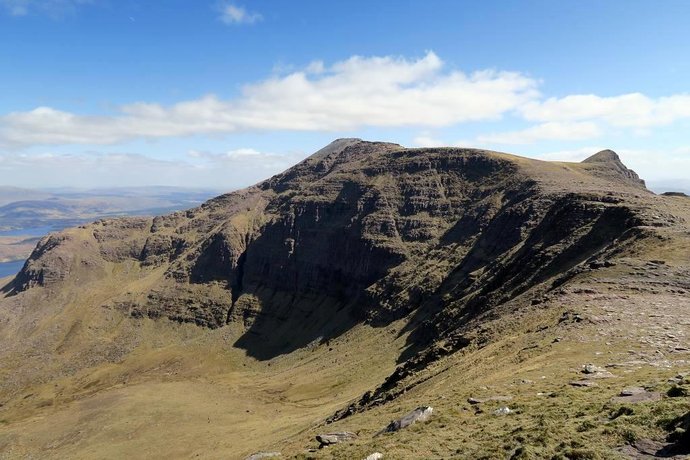 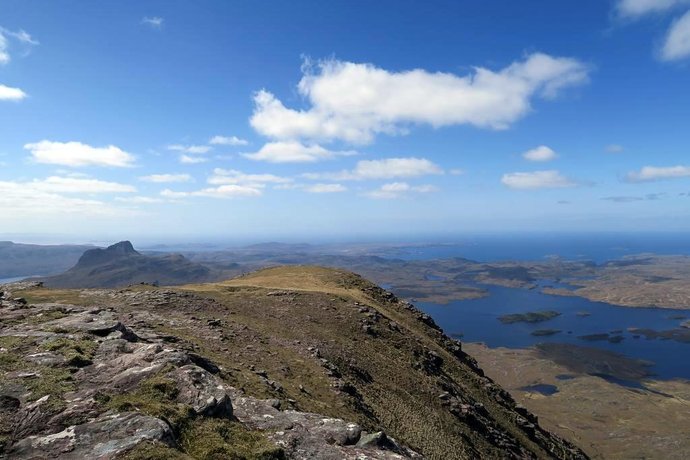 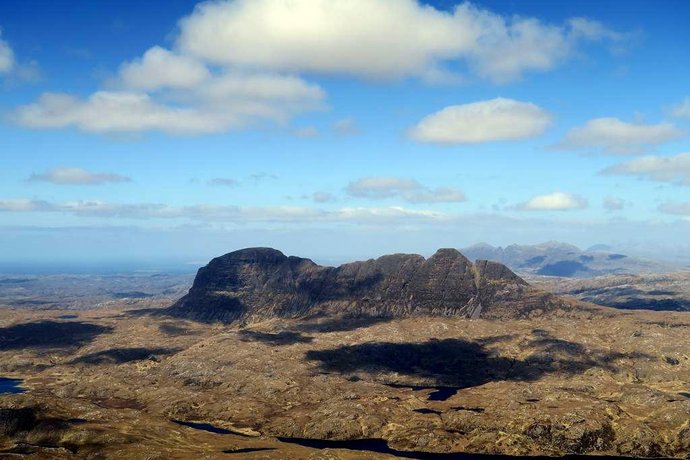 Although the wind was cool the rocks offered a choice of sheltered sun traps for a relaxed lunch - and what a view as we ate!

Torridonian sandstone and a secret beach on Lochan Gainmheich 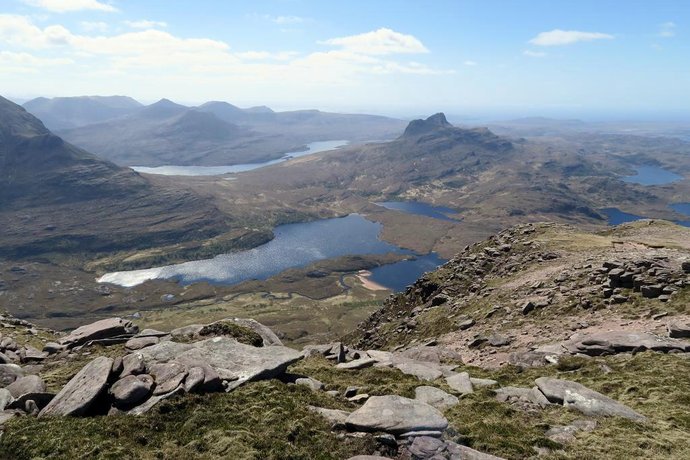 After exploring the western spur we returned to the bealach below the south top, Creag nan Calman. If we'd had more time we might have gone up but I had to be back early so we continued on down the grassy coire, picking up a path until it veered too far south at which point we cut across in the direction of the outward route.

Gentle grassy descent down a perfect U shaped coire 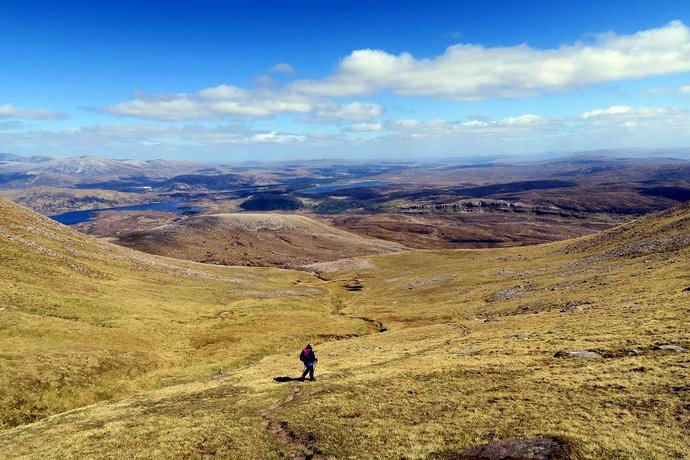 There was a burn to cross at the lowest point before the climb on to Meallan Diomhain and just after that crossing there was an area of wet ground which was easily skirted to the left. This was the only part of the whole walk where we had any issues with any kind of bogginess and it was only a small area. 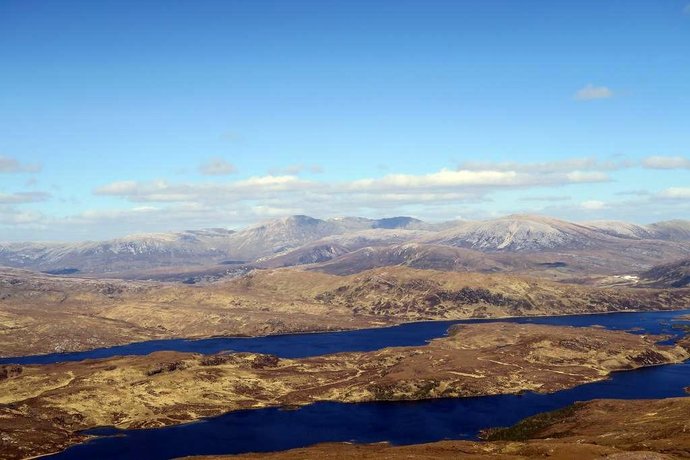 So there you have it. A shapely hill, good path, helpful cairns, sparkling lochans, spectacular landscape, sea views, sculpted rocks, towering cliffs, areas to explore - Cul Mor has it all.

Have to agree, a fab hill in the best part of the world!

Many may think this odd - but seeing the Assynt mountains is like seeing old friends, they have so much distinct character!

Your report was beautiful thank you. We have been meaning to go up Cul Mor and you have inspired me to get on with it.

mmill wrote:Have to agree, a fab hill in the best part of the world!

Many may think this odd - but seeing the Assynt mountains is like seeing old friends, they have so much distinct character!

Cairngorm creeper wrote:Your report was beautiful thank you. We have been meaning to go up Cul Mor and you have inspired me to get on with it.

Lovely stuff, thank you. Every time I've been up there I've thought about doing this one. You have encouraged me. Note to self: get on with it before it's too late!

This one wasn't on my shortlist for the area but it looks great.

Inspiring description Dogplodder and beautiful scenery. Makes me want to go straight there and experience the walk again.

tweedledog wrote:Lovely stuff, thank you. Every time I've been up there I've thought about doing this one. You have encouraged me. Note to self: get on with it before it's too late!

It's dog friendly too!

Brilliant, dogplodder! Great report and pictures - Cul Mor definitely top of my hitlist when I return to Assynt

I'm a newbie to the far North but enjoyed my Hope/Klibreck trip so much that I plan to get back there soon. It's just so....different up there

Lucky you for getting such good weather as well

It does all look fabulous up there, your photos say it all dogplodder

A brilliant report and photos that makes me want to go there tomorrow...

When someone asks me what my favourite mountain is, I usually can't answer. I doubt it's Cul Mor, but it has that great combination of looking good, having great views and being quite easy to get up that puts it way up the list

. Might use it as a 'family walk' in the next couple of weeks. I fancy exploring a longer approach sometime, but I have a feeling the next visit will be by your route again.

Gordie12 wrote:Thanks for adding another 300 - 400 miles on to my car mileage dogplodder

This one wasn't on my shortlist for the area but it looks great.

Sorry Gordie - but you know it's worth it!