Well, here we go again: our annual sojourn to the Western Highlands and the hope that we might summit a few more Munros. As ever, our journey started at Euston to catch the sleeper for Inverness. The day before we left Paddy (McGuire), our guide, had emailed saying there was still a lot of snow lying in the corries of the northern Cuillin and that we would definitely need ice axes and maybe crampons if it turned colder. So our first stop was Tiso to hire crampons – not as easy as it sounds when they have packed away the winter stuff and Neill and I both take size 46 boots. But the Tiso guys were great, finding two pairs with bars that made them fit.

On to Skye via Lochcarron (for lunch) and then the Co-op at Portree to get essential supplies for the week: beer, wine, pork pies, Tunnocks Wafers – and some food.

It had rained Saturday night, but Sunday was set fair if not sunny. After our traditional pre-walk breakfast of porridge (courtesy of Neill) we set out to meet Paddy at the Sligachan Mountain Rescue Hut. Once met, we decamped to the lay-by at the beginning of the walk.

Ice axes, yes; crampons, no – it was too warm and the snow would be soft. Off we set and the walking was very gentle and dry – none of the paddling we had last year. We made a large boulder at the beginning of Foinn Choire proper and Paddy signalled that it was time for a rest. This (as we would learn later) was an ‘official’ rest as Paddy sat down and poured a cup of coffee from his flask. The rest wasn’t ‘official’ (but by request) on other occasions. Nev doing his best to look an intrepid mountaineer (Neill) A little further on, we reached the snow leading up to Bealach nan Lice. Helmets on, poles away and ice axes out. About ten or twenty faltering steps further I decided that I wasn’t going to be a Himalayan mountaineer after all. This was hard work, made all the harder by my not realising that it was far easier to follow in the compacted steps of the person in front instead of breaking new trail, however intrepid that me feel. I was also missing my ‘security blanket’ poles which not only propel me upwards, but also keep me upright. So, despite best advice I opted for one pole and ice axe; this seemed to work – I felt much happier and made far more steady progress. 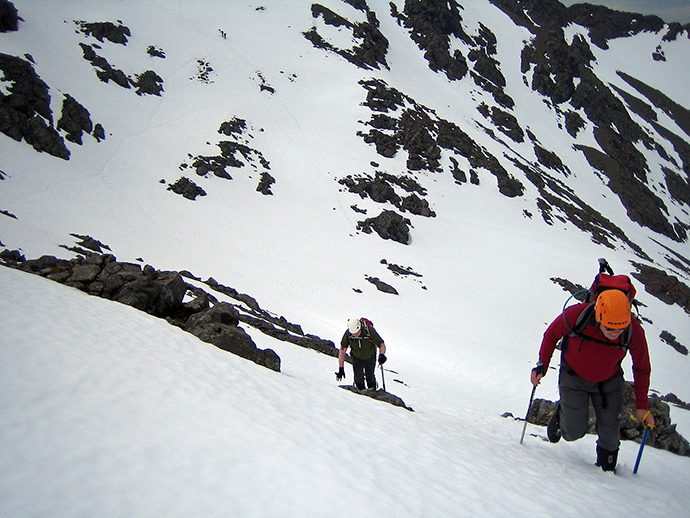 Nev and Neill toiling up the snow (Dave) Once at the bealach we shed our packs and headed for the summit, which despite having to traverse more snow did not take long to reach. Back towards Am Basteir and Sgurr nan Gillean The views were good, if not perfect as it was hazy and overcast which always ‘flattens’ the vista. A few summit pics were taken and then it was back down to the bealach for an ‘official’ lunch stop out of the wind. Traverse back under Sgurr a Foinn Choire (Nev) Lunch over down we went. I quickly realised that on descending a snow slope it was easier to make your path on fresh snow and in doing so I could stay more-or-less on top using the snow as both brake and shock absorber. This I liked and made it to the bottom of the snow without mishap; not so Neill. Being a little bigger, he kept on sinking in the soft snow; sometimes well beyond his knees, which resulted in him losing balance. However, it provided excellent practice in using his axe to arrest his (gentle) topple from upright. Dave floated over the snow – we have seen him walk on water before.

From there it was an easy walk out to the car, punctuated only by the mad cocker spaniel we saw on the way up still running around as he might have done in the local park; and, two slightly mad Geordie mountain bikers one of whom was reduced to carrying his bike as it had suffered a puncture.

I might add we were also passed by some young guys in running shoes (wet), one of whom was wearing a tartan beret with fake ginger hair (no helmet) – no ice axes; a guy in what can best be described as golfing clothes – no ice axe, but he did have the air of having done this before; and a group of young Germans – no helmets or ice axes, they weren’t exactly sure of the best way up and asked Paddy for advice. He gently pointed out that they were ill-equipped and his advice would be to turn back. This they ignored. You do have to wonder! I would be all for the Mountain Rescue Teams charging for the rescue of those deemed insufficiently equipped. Of course this does raise the thorny issue of defining ‘insufficient’ so I better shut up now.

A good walk and a relatively easy re-introduction to the Cuillin.

The best place in the world - I never tire of looking at pics of it. Glad you had good weather too.

Hope to be there next week.

Ah, the summit I'd hoped for a few weeks ago, but didn't make.
Great to see the summit pictures. Sad to have missed out on those views.