After an evening of Eurovision and an indian takeaway, I took the children to bed and - not for the first time - fell asleep in the process!

I woke at 2.30am, strangely feeling like I’d had a half-decent sleep. The weather was clear, sunrise was due at 5am, and I realised I could enjoy it from Ben Vorlich and be home for breakfast!

our_route.gpx Open full screen  NB: Walkhighlands is not responsible for the accuracy of gpx files in users posts
I collected my walking clothes, filled a drinks bottle, and was away. The journey in the dark took only 52 minutes, the narrow road along the south side of Loch Earn overflowing with campers' vehicles in every lay-by (perhaps the result of the new bye-laws banning camping at Loch Lomond?), with the occupants of one being startled out of their sleep by my un-dipped headlights!

By 4:04 I was on my way, beginning in twilight along the driveway to Ardvorlich House, feeling the chill wearing a t-shirt, as my thermometer read only 1 degree. As the track meandered up the wooded glen, the dawn chorus was in full swing, a cuckoo a welcoming sound as always. I had no map and almost took the wrong arm of a fork in the track, only to cut back up to rejoin the correct route, crossing the Allt Choire Bhuide at a footbridge leading onto the open hillside.

I had a skylark for company as I ascended along the very well-worn path, my steps preceded by a group of young lambs that scampered away as i approached, a cousin of their's glowering down at me from a knoll above. My route flanked the southern ridge of Ben Vorlich at first, before gaining the crest as the gradient increases to a very-convincing false summit. Atop this, the final, graceful curve of ridge was visible leading directly to the summit triangulation pillar: a rare sight given the uncommonly concave nature of these upper slopes. Lawers in the twilight Behind me the silhouette of Ben Lawers had been joined in view by dozens more recognisable summits of the central highlands, the eye inevitably seeking to pick out Ben Nevis – with success. The sun was now rising over the summit plateau of Ben Chonzie, lighting the final steep pathway to the summit in a hint of orange. Sun rising over the hills

In such clear conditions, to reach the summit (05:22) of this famous Munro as dawn was breaking in red and orange to the east, was an awe-inspiring experience. From the still plumes of smoke in the industrial Forth Valley, to West Highland peaks from Ben Lomond to Glencoe, the view was breathtaking. Ben More and Stob Binnein beyond the summit pillar Looking back at the ascent route from the summit pillar 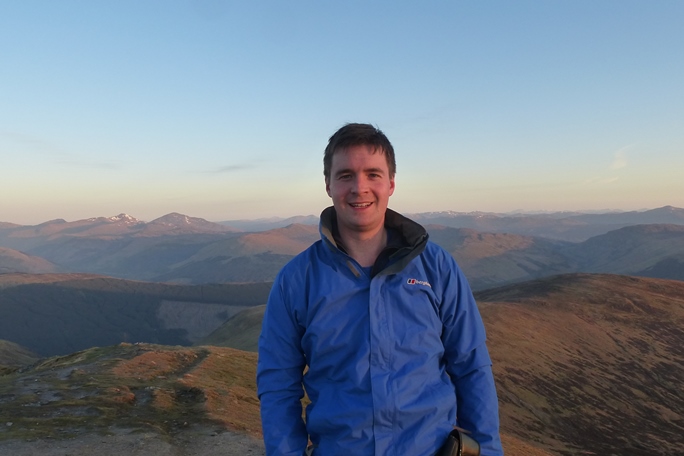 Despite my thermometer registering -1 degrees, the narrow summit ridge was now snow-free, although large patches remained on the eastern aspects of the domianating twin peaks of Ben More and Stob Binnien. Streaks of high cloud were shielding me from the direct rays of the sun, which filtered through to light up morning mist on the intervening hills. Ben Nevis from the summit Sun rays over the summit ridge

Mindful of fulfilling my intention to return home before breakfast, after almost half an hour I began the descent. I descended away from the gravelly path, on softer ground which, once the gradient had eased, allowed for an energetic gallop down spoungey moss and then heather. Mossy slopes for the descent The track back to the car

The remaining half hour walk back to the car was richly savoured, enjoying the vivid spring greens in the early-morning sunshine. The character of this glen has a flavour of the Lake District to it, with lime green, well-grazed, grassy slopes amid scattered deciduous trees giving it a softer nature ideal for a newcomer to the Munros. Looking back now Ben Vorlich was an impressive sight to photograph, awaiting scores of Sunday visitors no doubt, but I had to turn my back albeit thoroughly satisfied with a 6:45am return to the car. Ben Vorlich from the descent track Sun rays through the trees Ben Vorlich towers above the gate on the track home Trees lit up by the sun

A perfect start to the day was topped off by a superb area of sunlit bluebells catching my eye, prompting a pause in the journey and a visit with the camera. I was back at the house in Newburgh before 8am. Back at the lochside Wow - those photos are fantastic. That must have been so special

Good on you for seizing the moment!

Nicely captured sunrise, and I love the morning colours once you were back down. To think I was camped out on a summit in Arrochar that night with plenty of opportunity to just roll out of bed and take similar pictures, and I slept right through it