This is an attempt to write a report on one of the most trying of all Grahams. Not a hill that I would imagine many people repeating, or even visiting in the first place, due to the position of the summit in the middle of about 20 square kilometers of the deepest peat hags the highlands have to offer. While a couple of estate tracks come close in elevation to the summit, you are still left with over a mile of squelching, sapping peat and springy moss to cross, whichever direction you come from.

our_route.gpx Open full screen  NB: Walkhighlands is not responsible for the accuracy of gpx files in users posts
I had spent most of this weekend in Hootanany's working my way through what felt like an entire barrel of McEwan's 80/-, so needed a bit of fresh air and a shortish blast around some local hills.

So it was that I found myself repeating this hill today. For all I have said against it, it still remains the closest bit of high ground to home for me, and one that is just as easy to cycle to as drive to the start of. I first did a traverse of the hill in December 2008 starting at Ruthven, and getting picked up a couple of miles from home. If there was ever an opportunity to make this hill seem appealing, that was it. Blue sky in all directions, a layer of fresh snow, and frozen underfoot higher up. Sadly I didn't have a camera with me that time, so you will just have to make do with this inferior report instead.

I left the house rather late in the afternoon and cycled over to Dalroy. If you were driving to the hill, there is loads of parking space here in a loop of old road. For me, it is almost as quick to cycle here, taking about half an hour from the house. A good driveway goes up to Finglack, after which the track deteriorates a bit and gets steeper. The hillside hereabouts is terraced, so the steep sections don't last too long. Soon, I was out of the woods and on the open moorland. The weather wasn't looking too great, with cloud sitting over Beinn Bhuidhe Mhor, and another shower clearly on its way.

The estate is very much geared towards grouse shooting, and there are a couple of locked wooden sheds, and various tracked vehicles and quad bikes parked up. Probabably a good thing I was doing this before the 12th. The track was wet in places, but pretty good all the way to the summit of Beinn Bhuidhe Mhor. It doesn't make the most exciting line of ascent though, as it has been excavated down to the bedrock, meaning you ascend in a 2m deep trench. I passed the odd runner and other mountain biker.

Looking N back down the track up Beinn Bhuidhe Mhor: 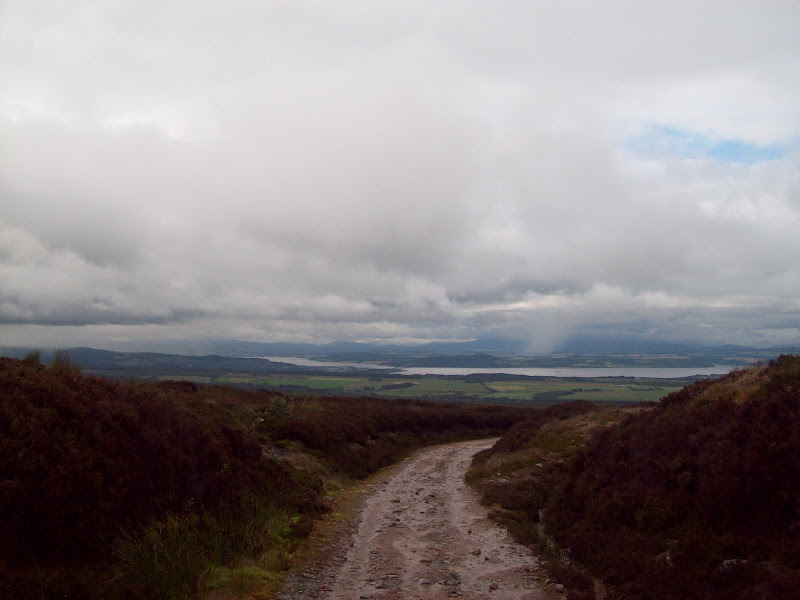 Beinn Bhuidhe Mhor is actually a very good viewpoint, and not too difficult to reach on mountain bike. Like other hills overlooking the Moray Firth, there are good views across the black Isle to Ben Wyvis and Easter Ross. Not today though. Luckily I have some other photos from a previous day out on the mountain bike.

Across the Moray Firth and the Black Isle to Meall Mor from Beinn Bhuidhe Mhor (Oct 2009): 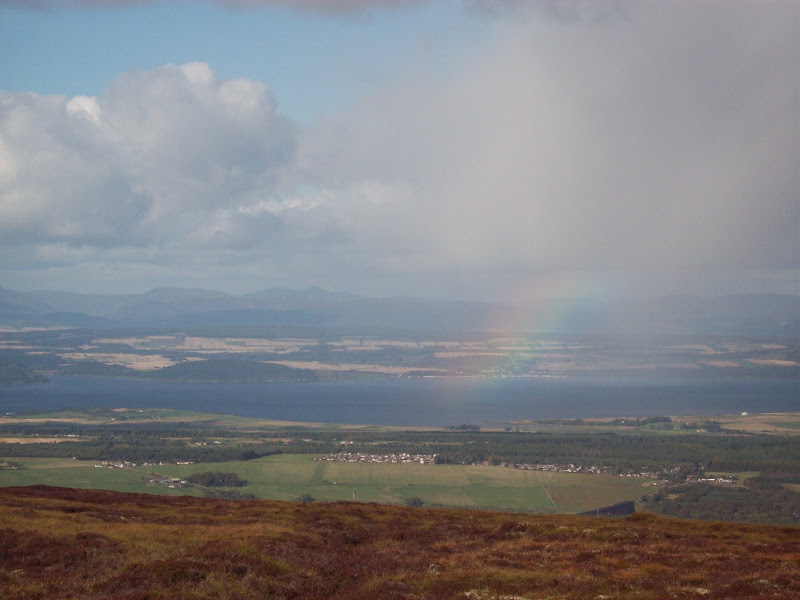 South to the Cairngorms and Monadhliath from Beinn Bhuidhe Mhor (Oct 2009): 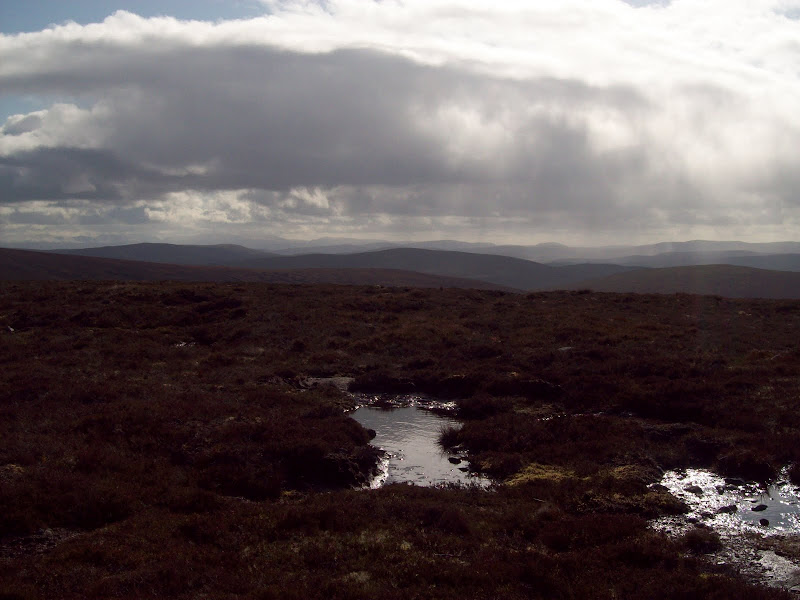 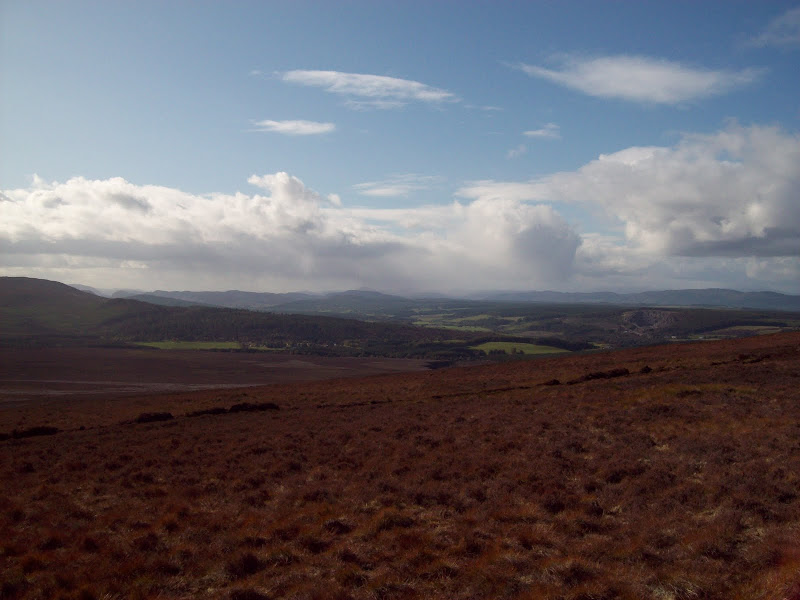 Looking back to Beinn Bhuidhe Mhor and Carn Dubh Mor from Beinn a Bhuchanaich (Oct 2009): 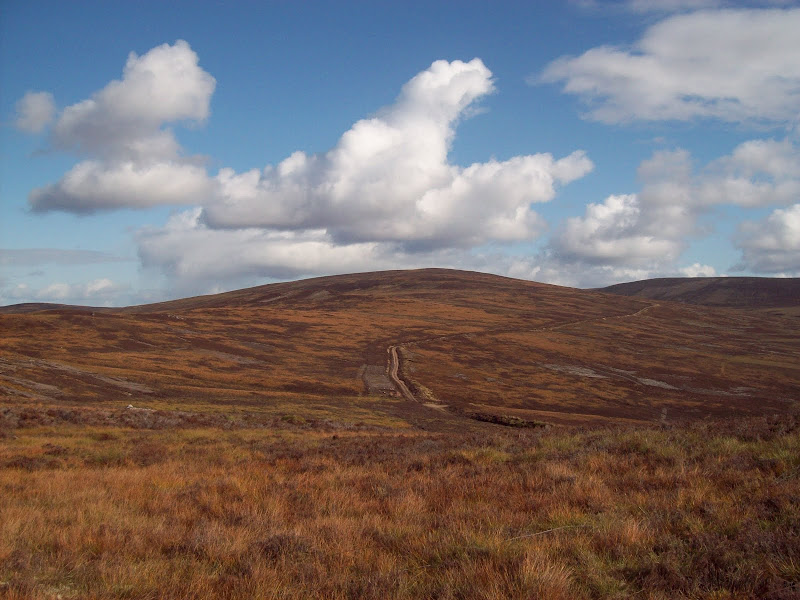 I abandoned the bike near the summit. The track continues to a dead end, but with a bit of carrying, a good circular route can be had. However, this was not my aim today. I wanted to work my way across the plateau to Carn Tri Tighearnan. It could have been a lovely evening walk, but in the event it was a good navigation exercise instead. I descended initially, on a faint path at this point. Soon I was re-ascending the shoulder of Carn Dubh Mor to gain the highest part of the plateau. There were a few grouse butts around here to help identify the location, but soon after I was on the eerily oozing plateau, where there was nothing distinctive. The elevation barely changes, and all the peat hags look the same. I took a bearing towards Lochan Dubha, but didn't ever find this. Maybe I did, and it was one of the wetter peat hags that I crossed. Who can say? Luckily the mist lifted slightly so I was able to turn SE towards the summit before I overshot it.

One of the strangest things about the plateau is the presence of the occasional conifer. Some of the peat hags must be deep enough to provide shelter for these to grow. They were certainly deep and frequent enough to add a significant amount of ascent onto the total for the day. 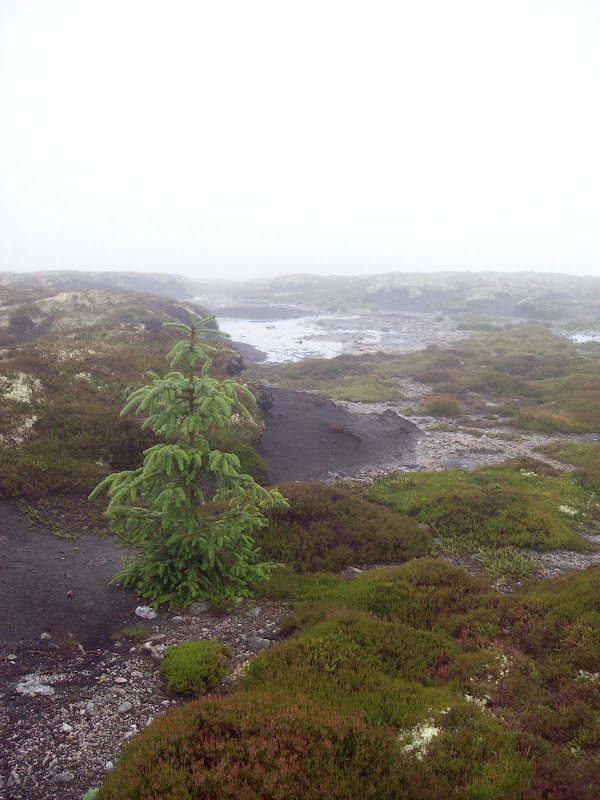 I finally reached the summit after almost an hour of bog trogging. The cloud lifted marginally, with extremely limited views down towards Moy, but dropped again soon after. 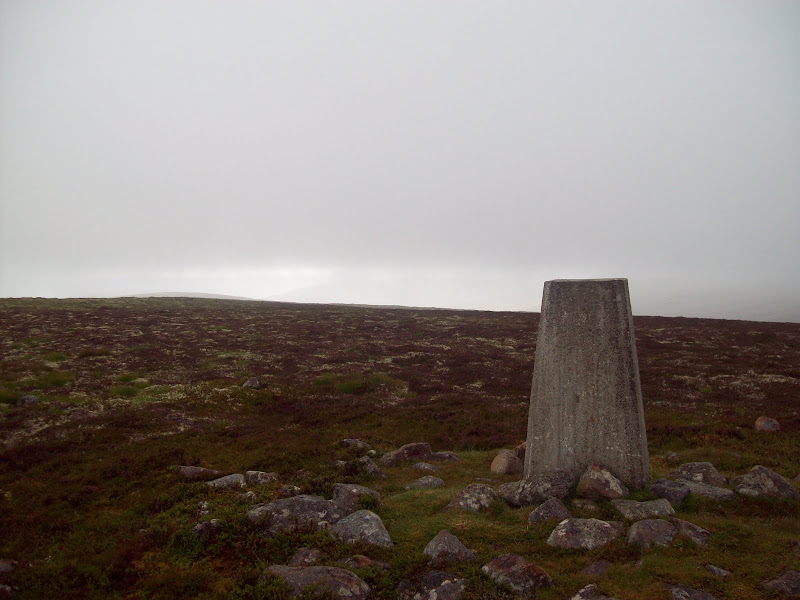 Towards Moy from near the summit of Carn Tri Tighearnan: 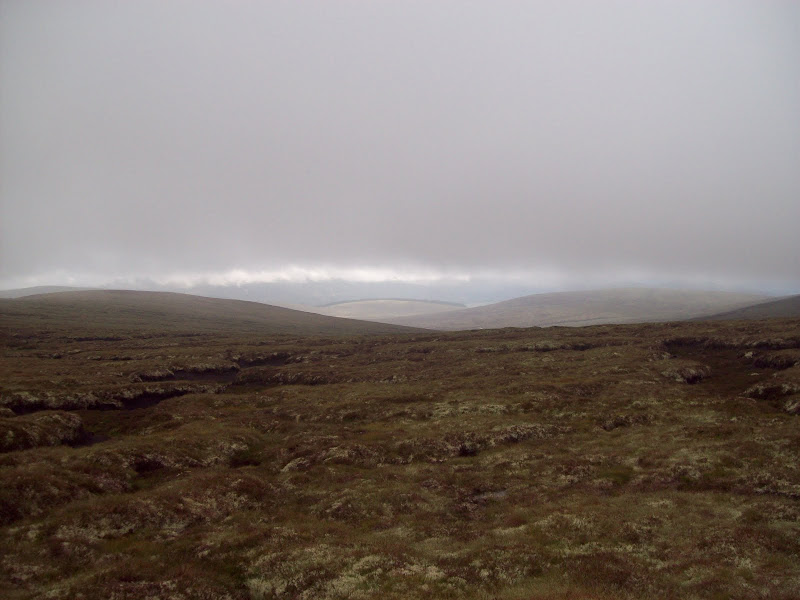 For my return, I took a bearing directly for Carn Dubh Mor. This appeared to cut about 5 minutes off my return time, but was much the same as the route over. All that now stood between me and a rapid descent was a short re-ascent to Beinn Bhuidhe Mhor, which was straightforward.

The next bit was great. From the summit of Beinn Bhuidhe Mhor, it is all downhill back to Culloden, bar one short pull out of Strathnairn to Culloden Muir. Once on the bike, I was back down to the road in under 15 minutes. The weather had deteriorated rapidly down here, and the remaining 20 minutes home were accompanied by some of the heaviest rain of the day. I was glad there was no car journey home, so I could jump straight off the bike into the shower!

Not to everyone's taste, but it is certainly an interesting hill, and it is worth experiencing the eerines of the peat hag-ridden plateau in zero visibility. I will undoubtedly be back up there again, although I tend to climb the neighbouring Carn na h-Easgainn more often, as it is so much easier to get to the top of.

Jings, it seems very bleak. God help anyone who gets lost out there by the looks of it...

I had lunch in Hoots today, the food is far too good.
For once i recognise where someone has been! I have been up Beinn Bhuidhe Bheag twice, and i find it very steep and hardgoing. On of these days i may venture further up.

Hoots is certainly great for food. Have just about managed to cure a friday lunchtime addiction to it (fairly customary for a group from my office to go there every friday!)

Certainly worth going up to Beinn Bhuide Mhor - not much more difficult than where you have been already. Going on to Carn Tri Tighearnan could put you off walking for life though, if you are up there in the wrong conditions!

There I was thinking about doing this one at the weekend, but maybe not! Bogs are my pet hate

Roughly how far can you take the car up the forest track? cheers