I managed to secure both Friday and Monday off work for what would turn out to be the last four of ten perfect days of weather. For me, an extended weekend with the promise of good weather means one place - Skye. Basscadet was coming up later on Friday so I had a day to myself to attempt a slightly more adventurous route than her ankle currently allows.


our_route.gpx Open full screen  NB: Walkhighlands is not responsible for the accuracy of gpx files in users posts
Sid's Rake via the Slapin Face to the summit of Clach Glas was selected from the SMC's Skye Scrambles. It was a quick stomp up the path to Choire a Caise, across the burn and over heather and rock to the base of the scramble at the all but dry burn coming down from the corrie. 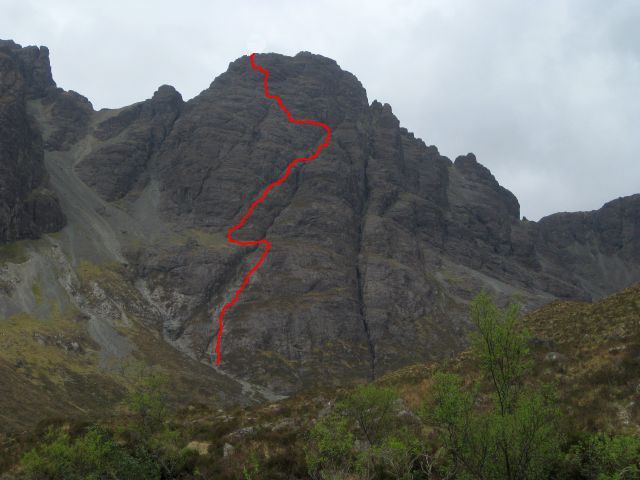 Rather than a tedious clamber up scree and heather to Boulder Terrace where the route start is described, I took the dry weather suggestion up steep but mossy slabs at grade 3. In these desert conditions they were no trouble and I romped up the 170m to the wide terrace with the eponymous large boulder. A rest and snack were had as I surveyed the route ahead. 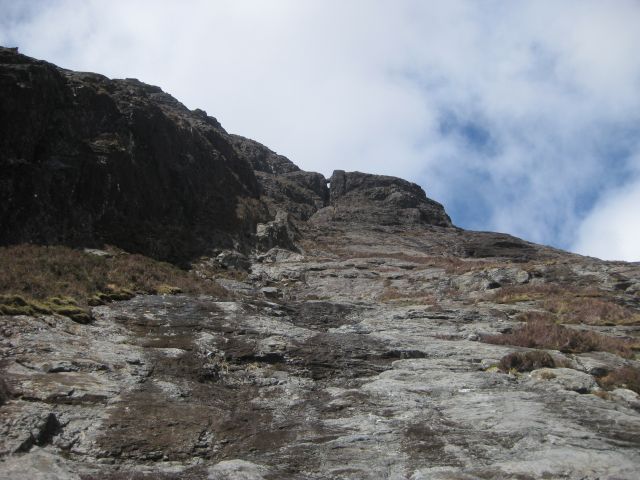 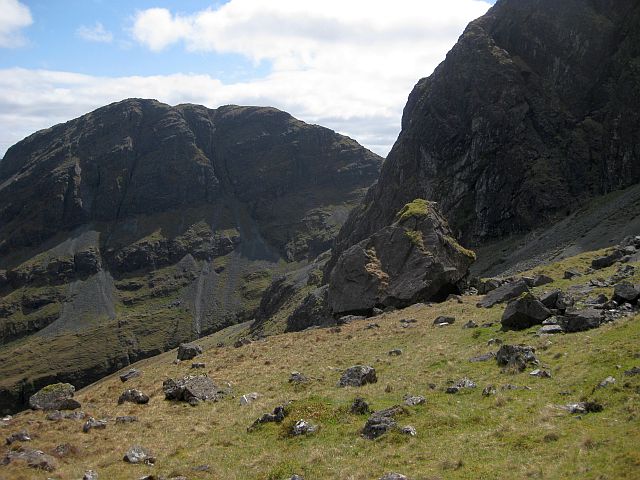 The route as described in the book starts at the terrace and heads obviously up a buttress between two gullies until reaching a rock bridge jammed in the gully on the right. To humour myself I crossed the bridge and briefly scrambled up the adjacent right hand buttress before rejoining the route at the top of the jammed gully. 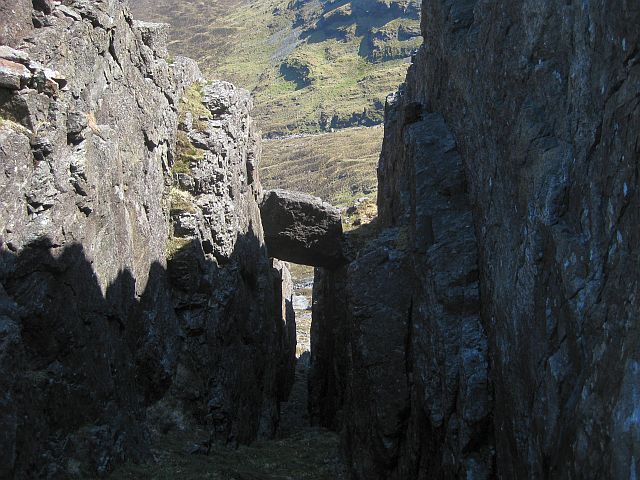 There were 2 options here: head right up a large gully (the original line of Sid's Rake); or go left up a narrower gully before emerging at slabs heading more directly to the summit (the Slapin the Face variation... ). Not much of a choice for me! So I went left, climbed a slightly awkward wall to gain the slabs and made my own route to the ridge, emerging just south of the Impostor and the summit. 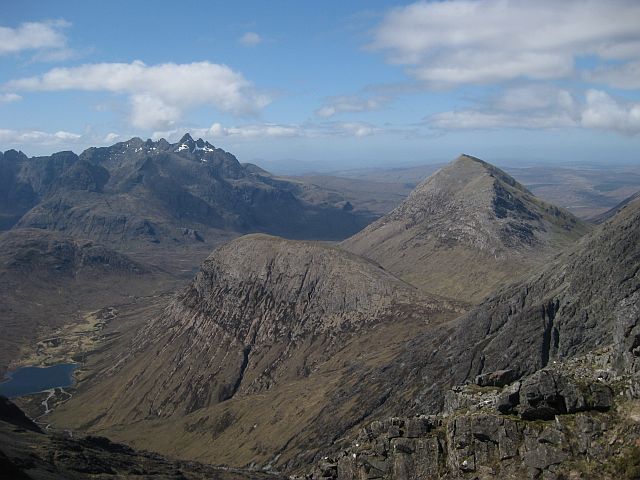 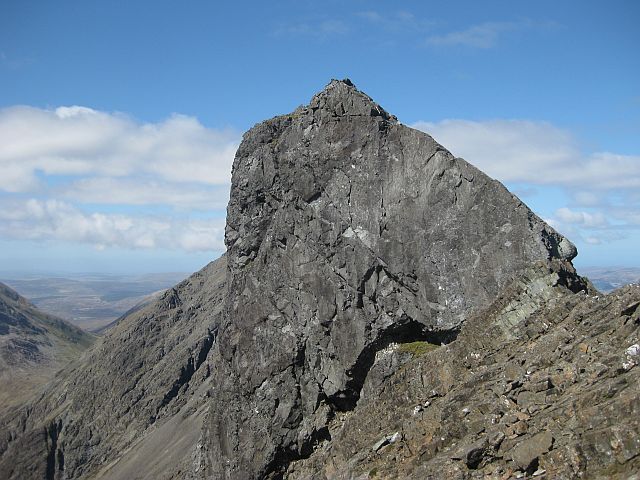 The Impostor (summit of Clach Glas)

A short move (graded Moderate but very short lived) led to the deceptively wide eastern side of the Impostor (not the Inn Pinn type knife-edge it appears from the south). I met a group of middle aged men with a guide who had come up the north ridge of Clach Glas. They were debating continuing to Blaven but I had already decided that was where I was going so nipped in front of them as they were starting off with their ropes and so on. The descent to the Putting Green was the trickiest bit of the day with some awkward route finding, a couple of downclimbs and diff wall at a notch - all great fun. 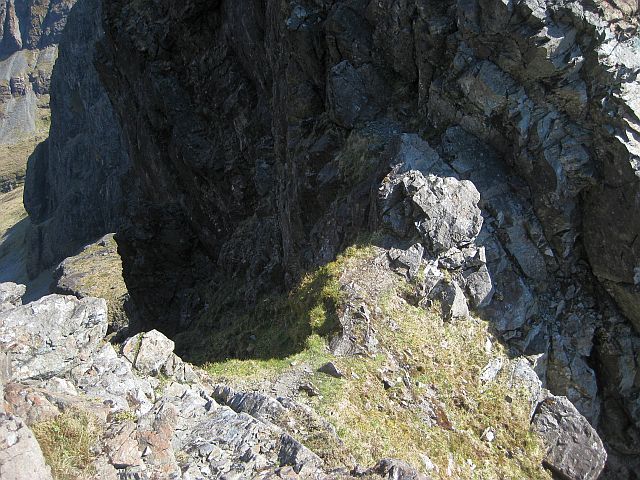 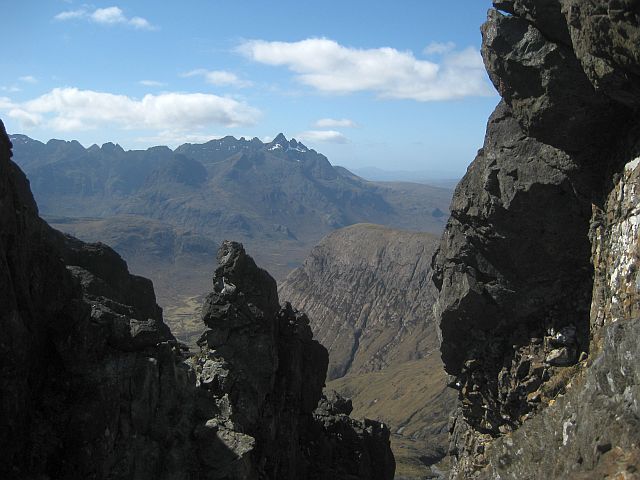 one of several notches en route

From the Putting Green I followed the path left then right to the left leading gully hiding the 18m diff chimney which allows access to the Blaven tourist path. The 18m chimney was great fun - perfect rock, neither claustrophobic or exposed, a bit of wedging and just enough steepness to get the pulse racing. From the top of the chimney I scrambled as much as could to the summit where I had a long break. 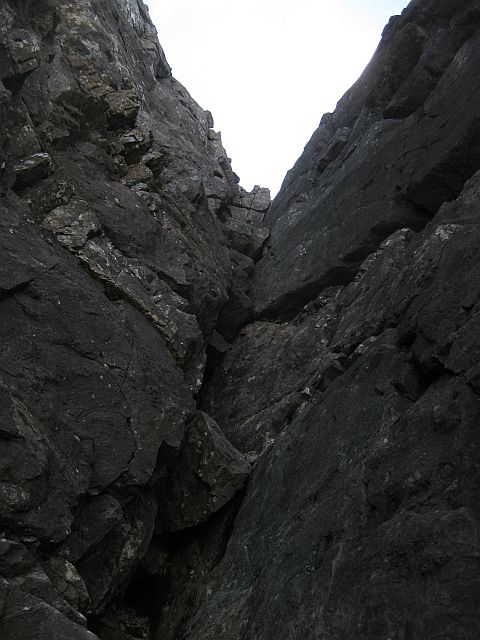 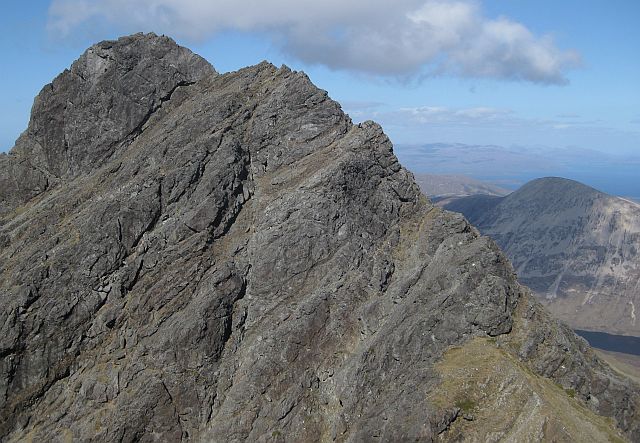 After, I continued over the south top and down the awful SE ridge path to the bealach with point 624. I looked down to Camasunary where we would head tomorrow before descending to Fionna-choire and rejoining the tourist path back to the carpark.

I passed the group I met earlier descending the scree beneath the Putting Green - they must have decided against continuing to Blaven. 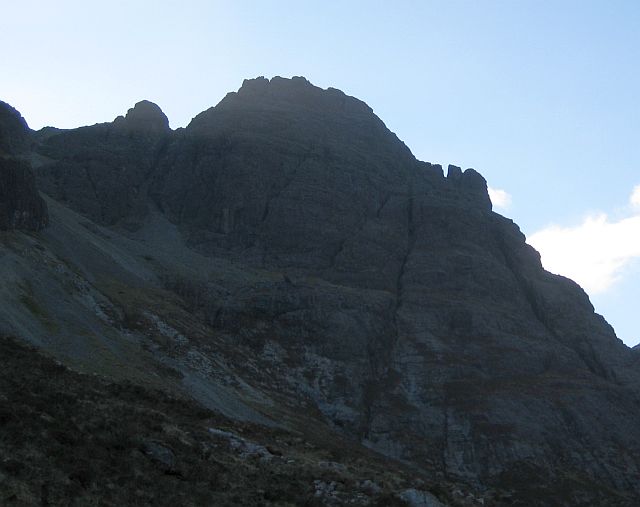 I returned to the car tired but exhilarated at a superb outing with as much great scrambling/easy climbing as could be wished for in a day. I can't wait to do it all again

Will that do for now Malky

Utterly splendid. Bookmarked for my next trip to Skye. I've been eyeing up Clach Glas for years but never had the bottle, this might just be the encouragement I need. Great photos of the route, thanks for taking the trouble to draw the red line

was worth the nagging to see it up

I can't really pass up on commenting here since I asked for it, can I?

That looked pretty interesting, and well worth the write-up. Some great photos as well

. I still fancy Clach Glas but not sure I'd be up for following that route or traversing onto Bla Bheinn these days. Still, something to look back at if I change my mind. Cheers

great report and pictures, in those conditions Skye is the best place to be

mgmt! wrote:great report and pictures, in those conditions Skye is the best place to be

BobMcBob wrote:Utterly splendid. Bookmarked for my next trip to Skye. I've been eyeing up Clach Glas for years but never had the bottle, this might just be the encouragement I need. Great photos of the route, thanks for taking the trouble to draw the red line

Pick a day like mine and the route up Clach Glas should be fine for a competent scrambler. The route on to Blaven does need a bit more care in route finding, however.

Looks a magnificent scramble up a very impressive face; inspiring report and photos

It's been a lot of years since I did the standard Clach Glas - Blaven traverse (which I thought was as good as any of the sections of the main ridge I'd done). At the time I was unaware of any scrambling routes up the Slapin face of CG; this would certainly justify a return visit!

We part did the traverse from the Garbh Beinn end on Friday on a whim, but hadn't done any planning and ended up short of time so sadly didn't get up to the summit of Clach Glas. We contemplated the frontal assault but as we hadn't done any reading on it (didn't know if there was a reasonable scrambling route), we gave it a miss.