WARNING: Due to the interesting Scottish weather this report also contains photos taken the next day with blue sky and sunshine. Purists may wish to turn away now ...

A motley crew had gathered around a Facebook conversation and ended up with the South Glen Shiel Ridge beckoning, just beyond the rain and clag. Myself, londonwalker, and GillC gathered at Shiel Bridge campsite on the Friday evening, where jaxter would join us the next morning for the epic journey.

The nice man at the BBC had promised a murky start, to be followed by an afternoon and evening of Factor 30 level sunshine .... it was Radio 4 forecast as well, what could possibly go wrong?

The overnight rain did dampen one or two spirits - possibly due to the thundering storm in the night, but the man at the Beeb had said it would turn out well so off we went. Leaving the jaxter-mobile at the finishing point we drove up to the small parking area on the access road 200m past Cluanie Inn, donning waterproofs off we went .... Relatively clear at this point the ridge did seem to stretch ahead for a long,long way ....

The weather had an interesting look about it ... 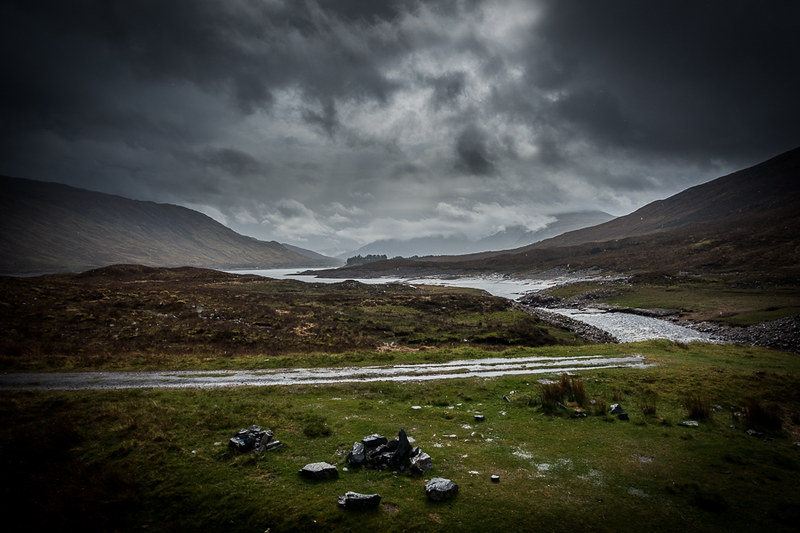 We followed the official WH route all the way (apart from the last half-mile or so - more later). The track takes you way off to the east and then just behind the first Munro, but is an excellent leg-warmer, and gets half the ascent sorted. 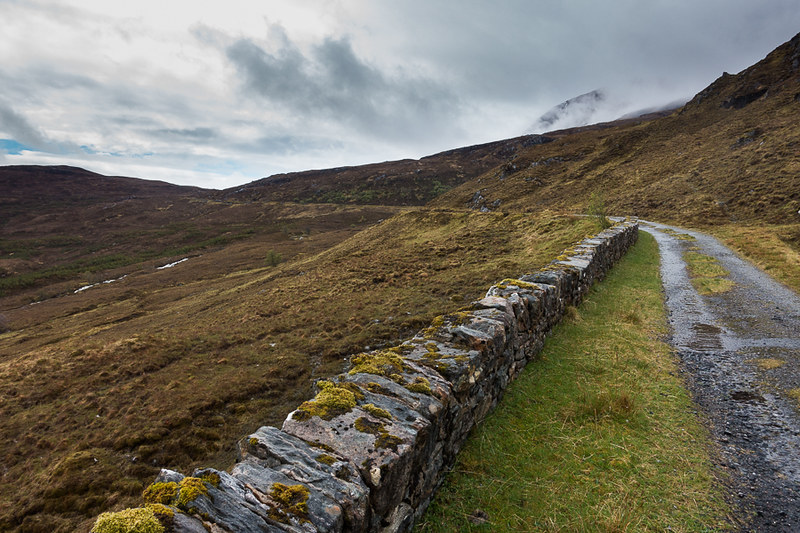 The first two Munros, Creag a'Mhaim and Druim Shionnach, with the clear line of the track seen running up from right to left: 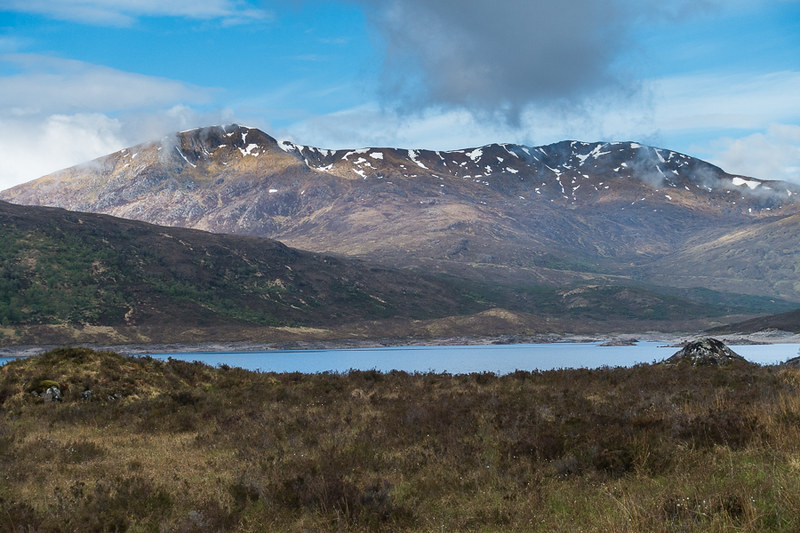 We followed the clear stalkers' path/steam to the top of the first Munro Creag a'Mhaim. The waterproofs had been off (briefly) then on again, and stayed on for the rest of the walk. Heavy rain on the first ascent eased a little as we got to the top allowing some atmospheric views over Loch Cluanie: 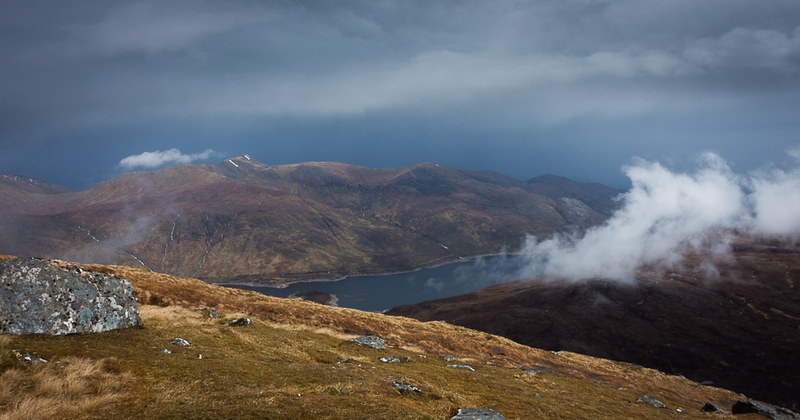 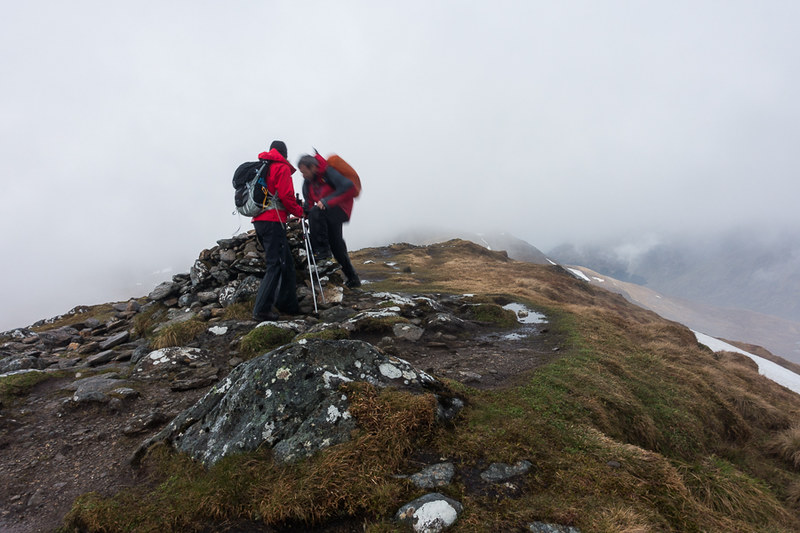 Now, I'm just saying, but if you had to accuse any of the seven Munros on the ridge of not pulling their weight it would have to be this one I'm afraid. It's not much a drop to the second Munro, and feels just a top rather than an individual summit. Applying the Marilyn criteria (150m all-round drop), only three of the peaks on the ridge qualify - nevertheless I'm not complaining... they all count!

Leaving the summit the rain came in and stayed for more or less until we got to the fifth Munro. Some significant events occurred along the way (well, one), and that was jaxter's centenary on the second Munro Druim Shionnach 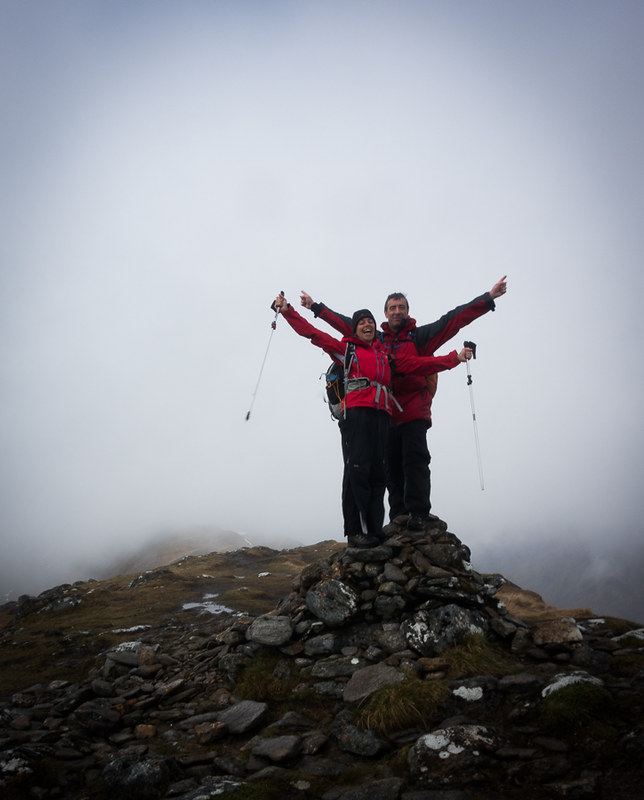 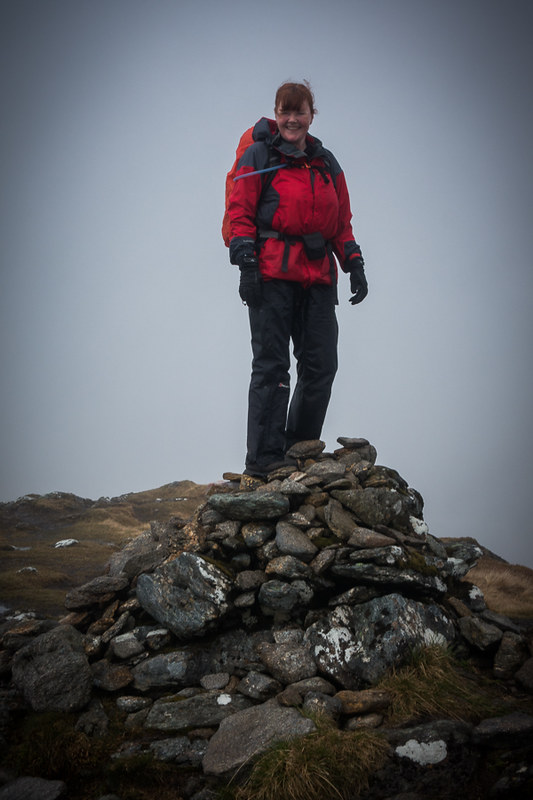 The route narrows significantly in parts after No,2, despite the clag there was still a hint of a significant drop off to the north at points across the rocky ridge to Maol Chinn-Dearg.
Aonach air Chrith (maybe), and Maol Chinn-Dearg (possibly ...), some confirmation or otherwise would be appreciated! 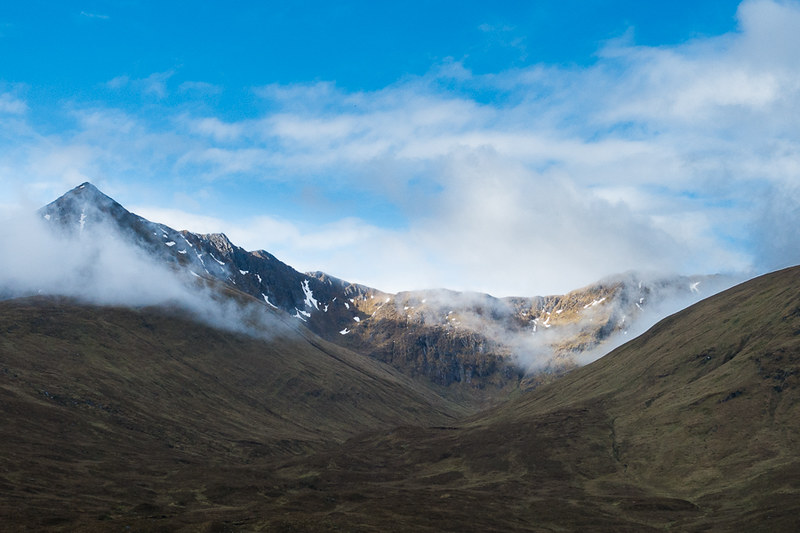 On approaching the 5th Munro, Sgurr an Doire Lothain, the cloud lifted a bit and we got some views. Loch Quioch to the south: 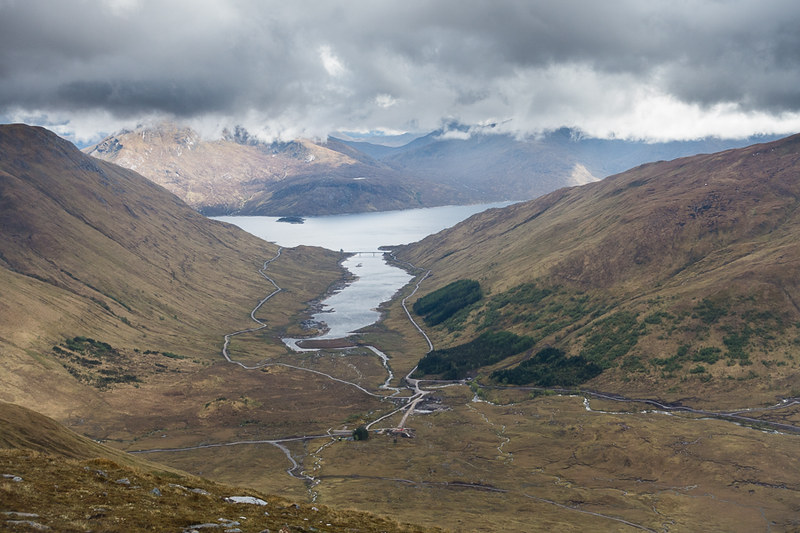 Looking back east along the ridge, with Gleouraich in the distance (to the right):

The route ahead up to Sgurr an Doire Lothain: 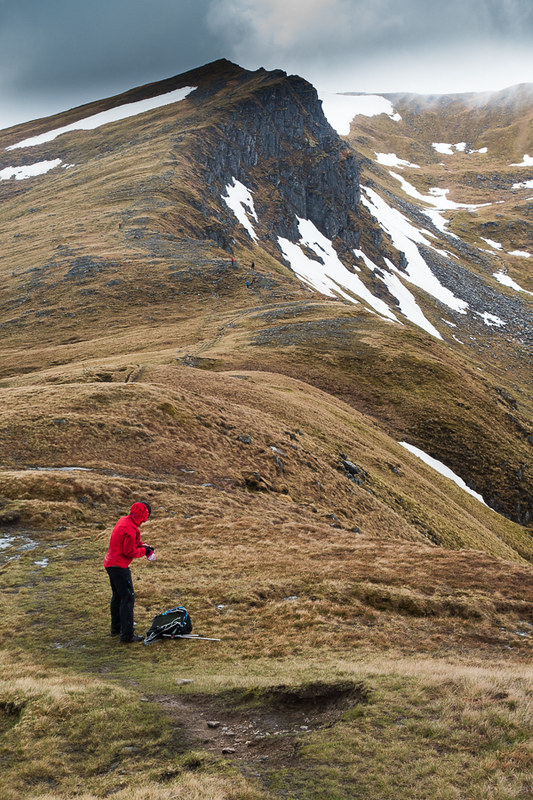 The ascent to Sgurr an Doire Lothain felt long and slow, tired limbs and wet everything dampening the mood. The summit is along a small spur to the north, and time for a welcome rest, even though the wind was howling by this time. We got some views here, the spur north to the summit: 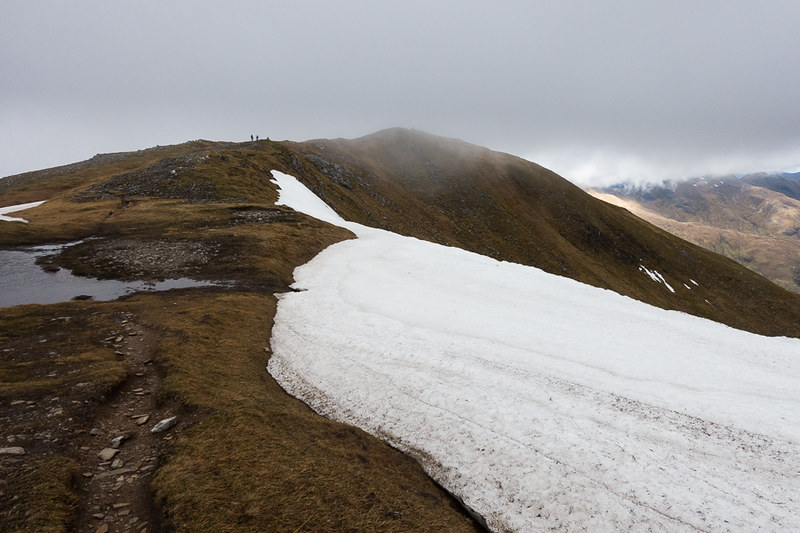 Down to Cluanie and the loch: 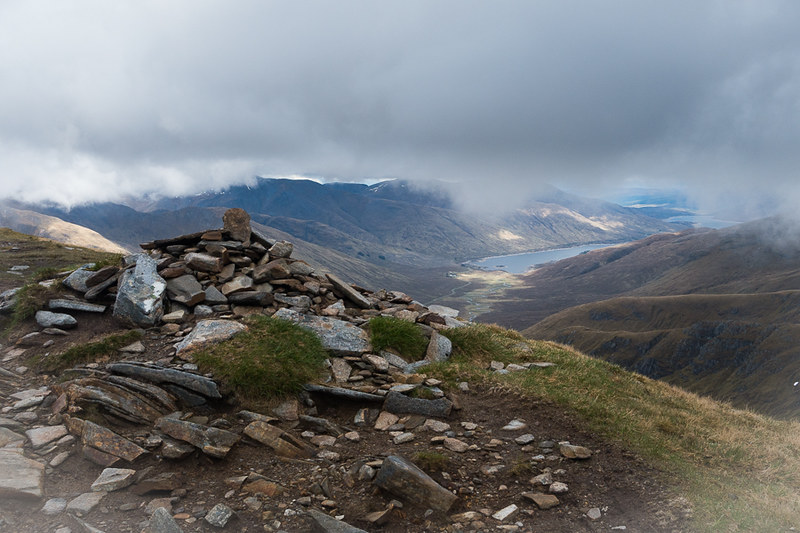 The next Munro along, Sgurr an Lochan, nice and pointy: 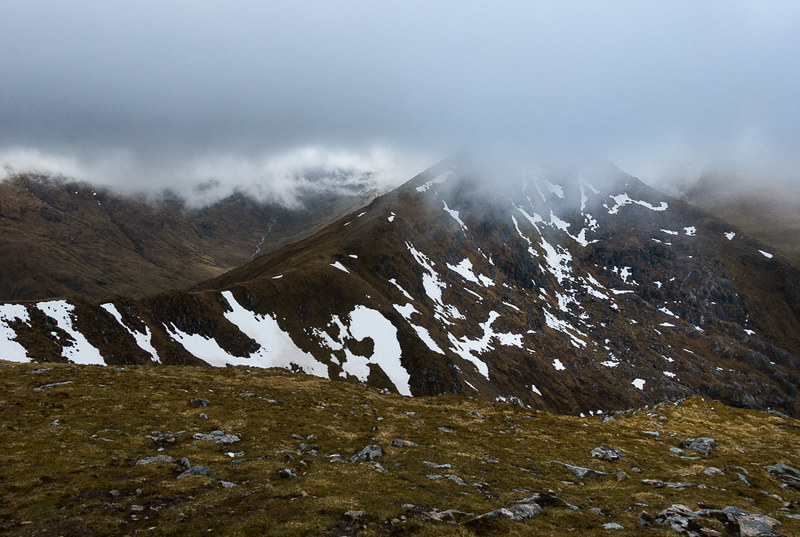 Coire an Lochain, nestling between Sgurr an Doire Leathain and Sgurr an Lochain (Nos 5 & 6): 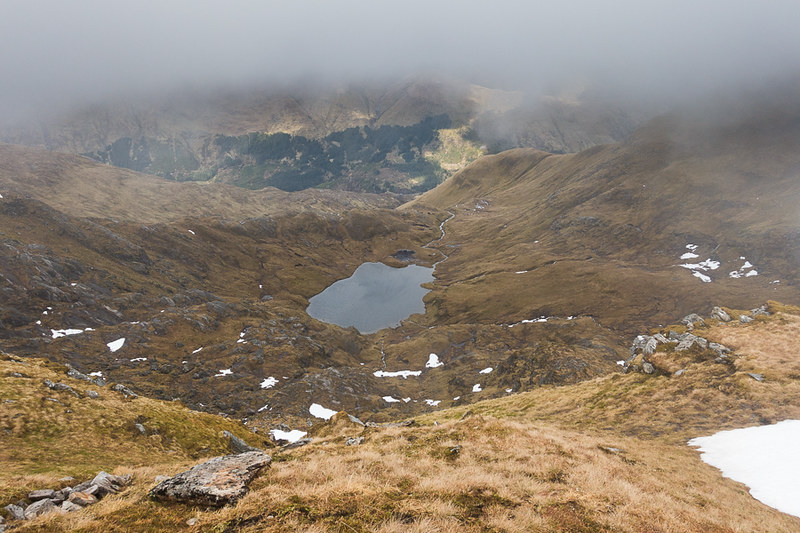 Are we nearly there yet? The anticipation ... the team on the 6th Munro. At this summit another group of three walkers were busy congratulating themselves, a centenary perhaps? Maybe 50 up for somebody? Nope, they thought that it was the 7th Munro (not sure quite where they thought they'd found the extra one from), and you can imagine their delight when politely informed of the requirement to shift themselves up just one more ....

Eventually we got up there, Crag nan Damh, a little more twisty turny rocky than the others, happy walkers, although it hadn't gone unnoticed that the nice chap from the BBC had got it wrong... 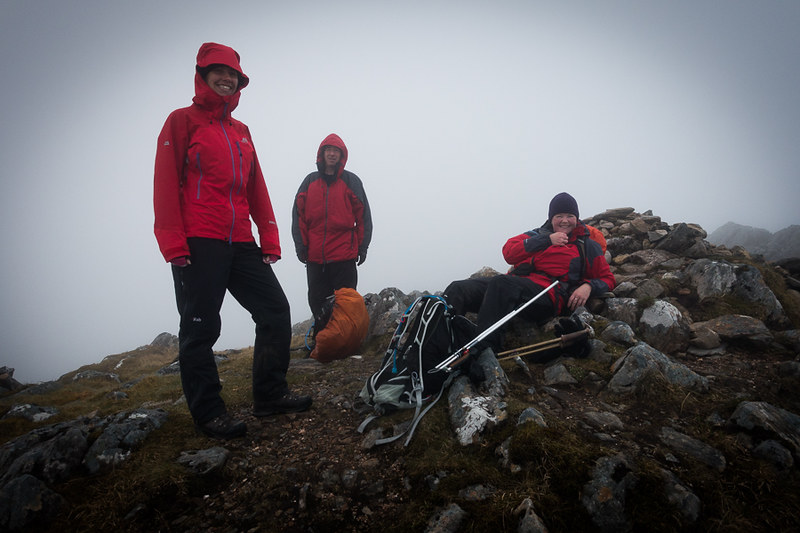 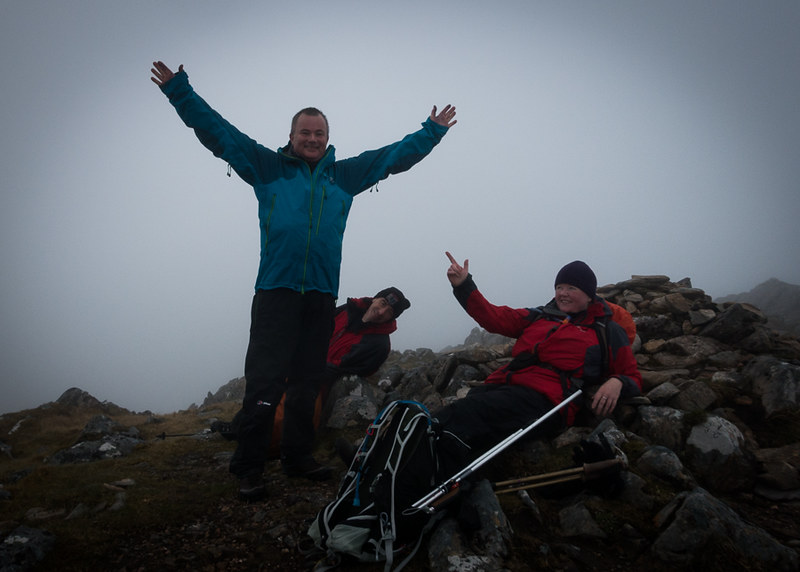 Leaving the summit of Creag nan Damh, the route continues west for another 1.5 km, but first a tricky little notch, with a scramble up the far wall had to be negotiated. No photo from up there, but the snow-filled notch could clearly be seen from the road the following morning: 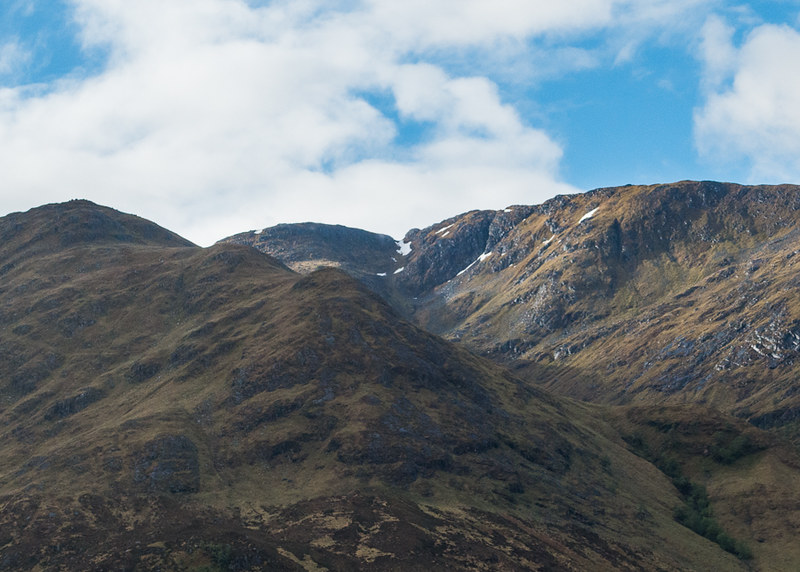 The descent from the bealach was slow and painful for me. Not particularly steep, just fatigue. It is a relatively sustained gradient of descent and a fullish stream to negotiate (thanks to jaxters bin bags that was ok): 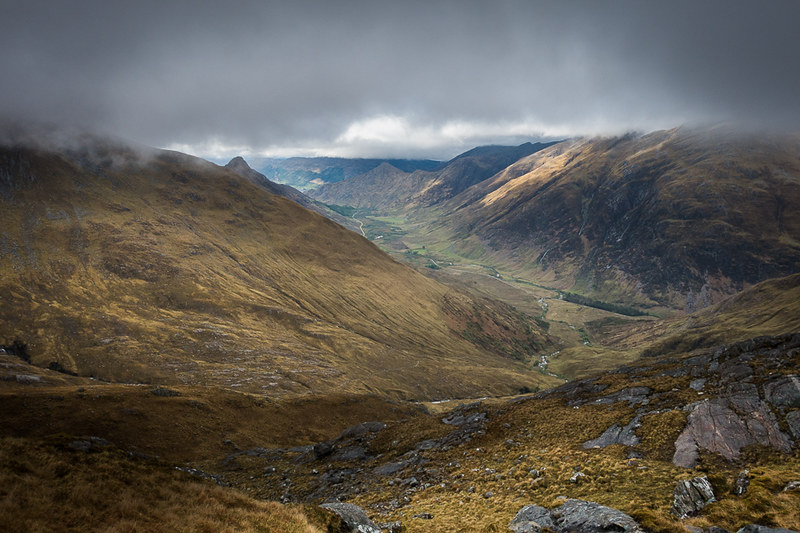 True to form the sun came out as we descended, highlighting the fact that the car could be seen from a long way away but was never getting any closer ..... 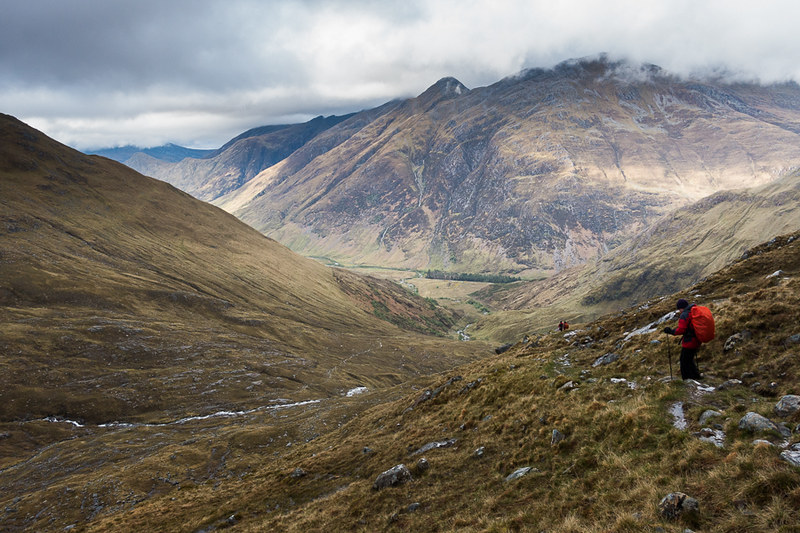 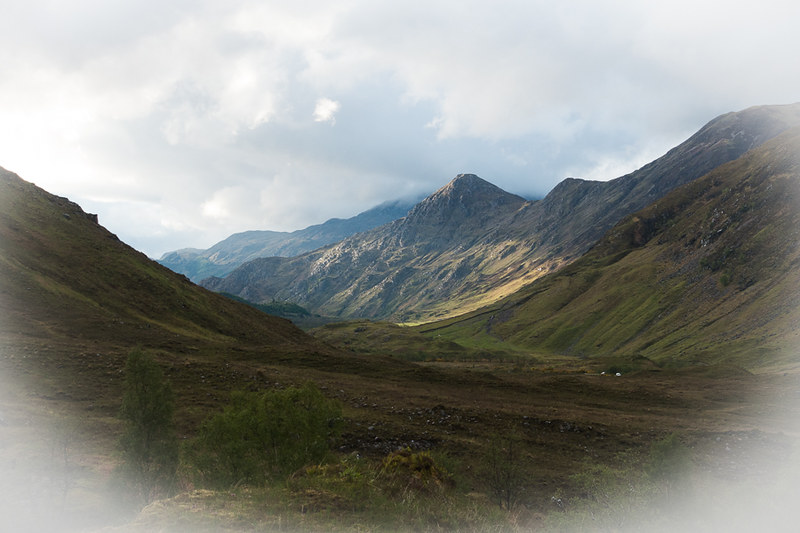 The sting was in the tail. Somehow we contrived to miss the footbridge at 972135, and ended up having to cross a small but deep and fast-flowing tributary at 970136. I decided to show off and fell in to mid-thigh. Eventually we hit the road, and squeezed into jaxter's car for the drive back to Cluanie, and food & beer at the Inn.
We got back to the campsite after 10pm; Scoob, Fi and Tomsie were there to resuscitate us with beer and good humour, a most welcome sight.
Because of family commitments I had to take off down the road the next day, but managed to get a few decent shots of the ridge on the way. Given the choice of doing that again on a decent day or knocking off a couple of less ridgy (ahem) Munros not yet done, I know which I'd choose. An epic day, thanks guys for going with. 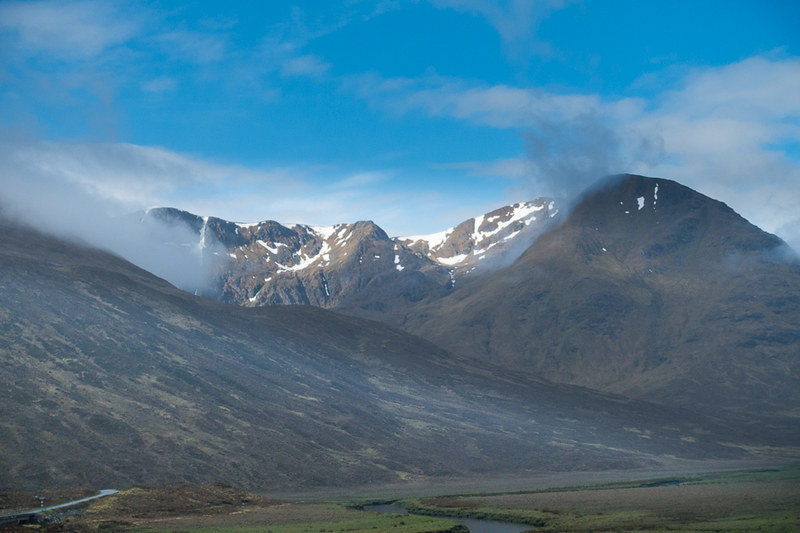 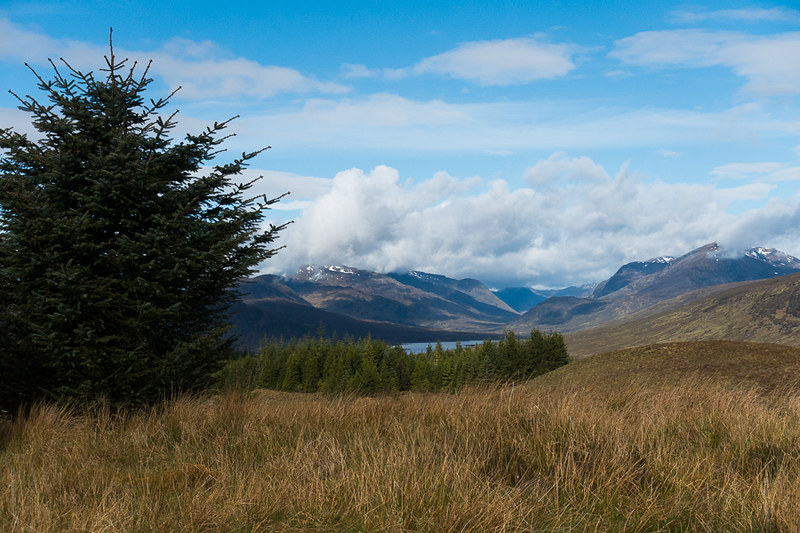 - but then any fool can get good photos on this ridge on a good day can't they?
.... well any fool but this one, my camera died after the first munro so I rely on wiser folk for reminders of a great ridge

Great reported of a fabulous day!

It was an epic for sure, despite the weather. Glad your photos turned out well, I was gutted when my camera malfunctioned

it was a wonderful way to celebrate my 100th

Enjoyed reading that, can't beat a spot of wit and great photo's considering the inclement conditions

To think it is 3 years since I was on the ridge and we had similar conditions - random views, still remember the final descent