After a couple of rest days I felt ready to go again – almost energised – but that would probably be overstating the case. It was another gorgeous morning with the promise of being yet another hot day.

We met Paddy in the car park next to Glen Brittle campsite and duly collected our helmets and climbing harnesses. Only a short rope today (should we need it) and once again Dave volunteered to carry it – in truth it doesn’t seem to make any difference to him – or at least he doesn’t grumble. When Neill and Dave were a tad younger and walking with another friend, they put rocks in Dave’s rucksack in the hope of slowing him up a little. No chance.

The first part of the walk to Coire Lagan was relatively gentle, but Neill was finding it hot and hard going. He had climbed Am Basteir the day before (as had Dave) and slogged his way through quite a bit of soft snow; it was now telling that he hadn’t recovered and the nascent virus was beginning to take its hold. He wanted to make it to the lochan, but after a couple of rests realised it was time to call it a day. 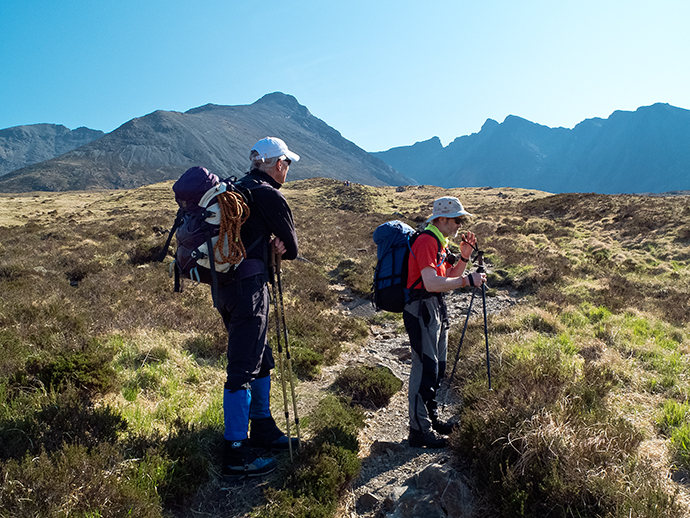 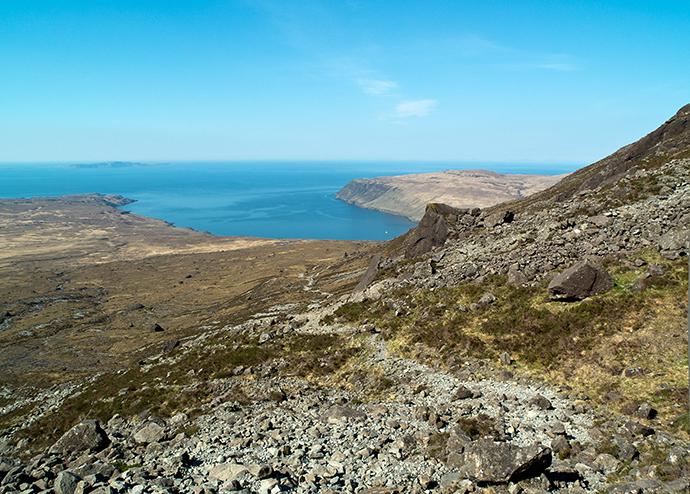 Looking back to Loch Brittle (Nev) 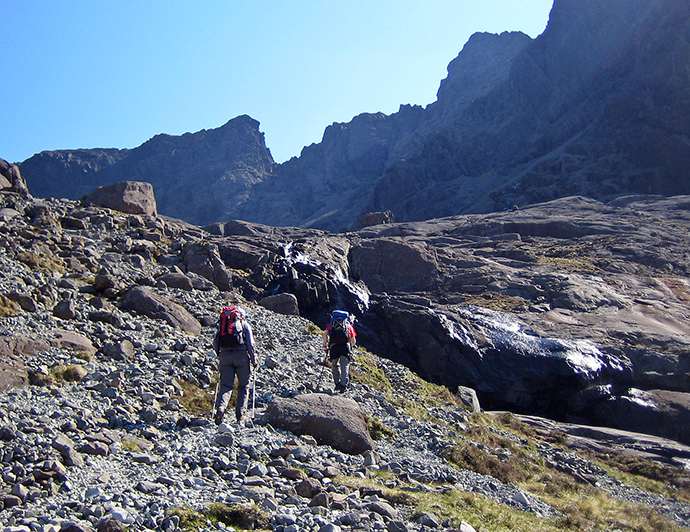 The ground now steepened as we reached the slabs at the lip of the Coire Lagan proper – Paddy picked a path to the left which zigged and zagged over some rough ground and between a few of the slabs. Once at the lochan we were rewarded with an ‘official break’; that is, Paddy needed coffee and would drink it sitting. 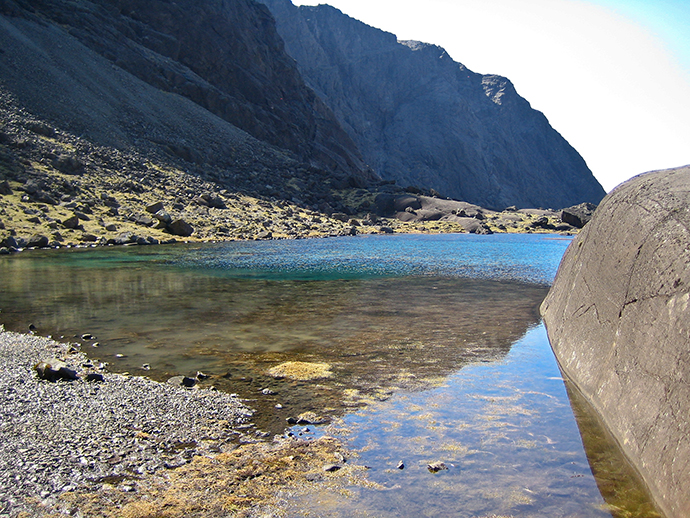 The lochan in Coire Lagan (Dave) 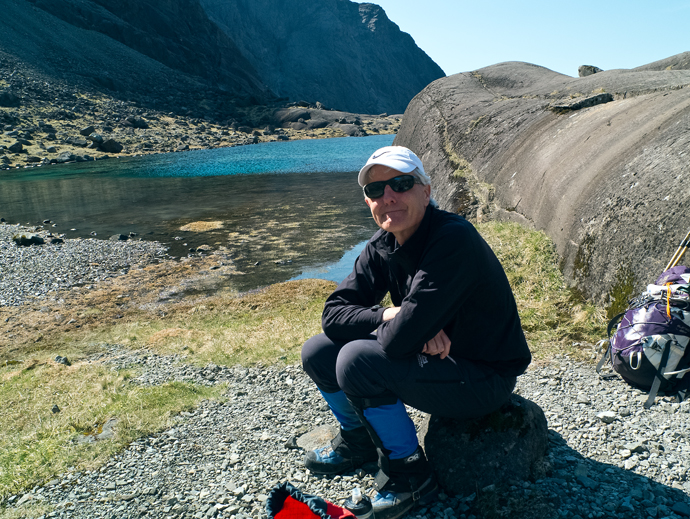 Dave having and 'official rest' at the lochan (Nev)

Looking at the scree slope ahead I was glad of the rest and the chance to add to my porridge, the effects of which were wearing off already. It was a beautiful place just to sit and gaze at the crags, water and little specks already crawling along the rocky crests.

All too soon it was time to don helmets and set off up the steep scree slope. Thankfully, Paddy took a line to the left, hugging the rock faces leading up to An Stac and Sgurr Dearg. It wasn’t easy, but a darn sight easier than trying to ascend the loose scree in the middle of the bowl. That would be our route down – oh joy. Not far below the top of the saddle between Sgurr Dearg and Sgurr Mhic Choinich we passed one of the many people known to Paddy – a guide ‘helping out’ someone else by sitting in the sun and looking after a dog. Just a little bit further and we reached a surprisingly spacious area of flat ground; one that was obviously used as a bivouac site by those intrepid souls trying to complete the ridge in one go.

Did we want lunch first and then scramble up the up the last bit, or, the other way around? Silly question really; we settled down for lunch. The views in all directions were simply breath-taking. An Stac from our lunch spot (Nev)

Looking north along the Cuillin (Nev) 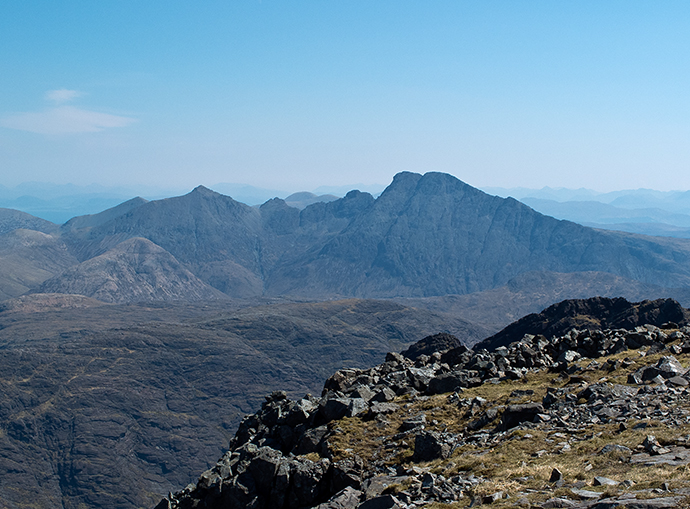 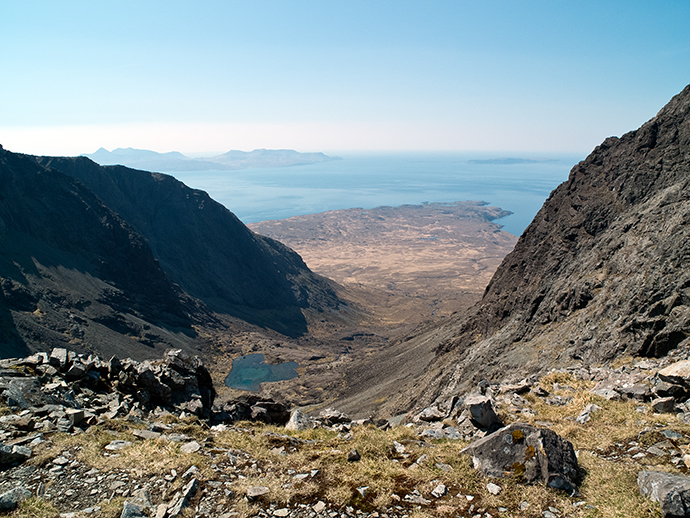 Looking back down Coire Lagan to Loch Brittle (Nev) Time to go – ever onwards, upwards and over the Coireachan Ruadha Crags – although without our packs which we left out of the sun. We put our climbing harnesses on and (Paddy) took the short rope should we feel that we needed it, although Paddy said it was like a staircase, windless and dry; so we should manage without. 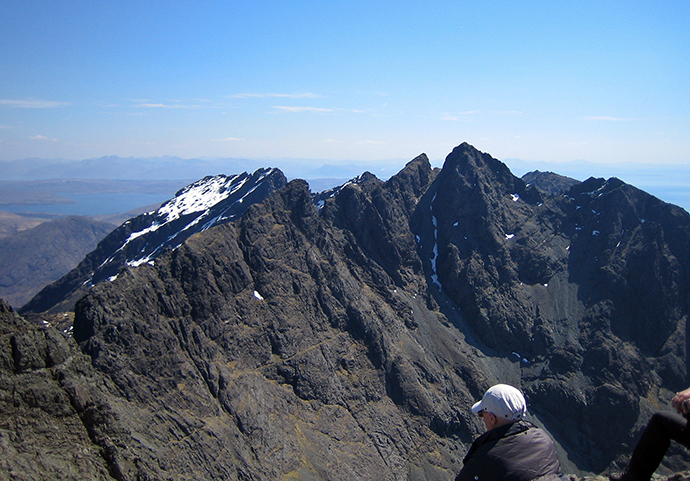 The scramble was exhilarating and airy in parts, but never did we feel out of our depth. The rock was pretty much sheer on the north-eastern side and in deep shadow making it look all the more forbidding. The south-western side was (slightly) less sheer with the odd terrace running across it. We crossed paths with a couple of teams on their way down; all seemed to be having a good time. The top was small with room for only a few to perch, so after a brief pause for a good look around and having taken a few pictures, we carefully made our way down passing another guide and team coming up. 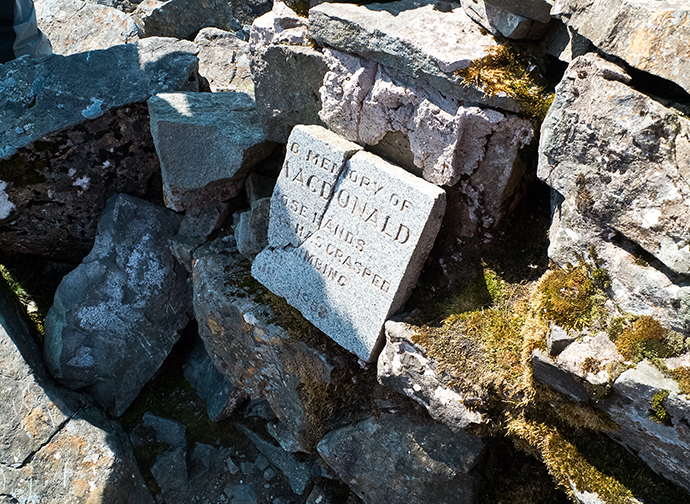 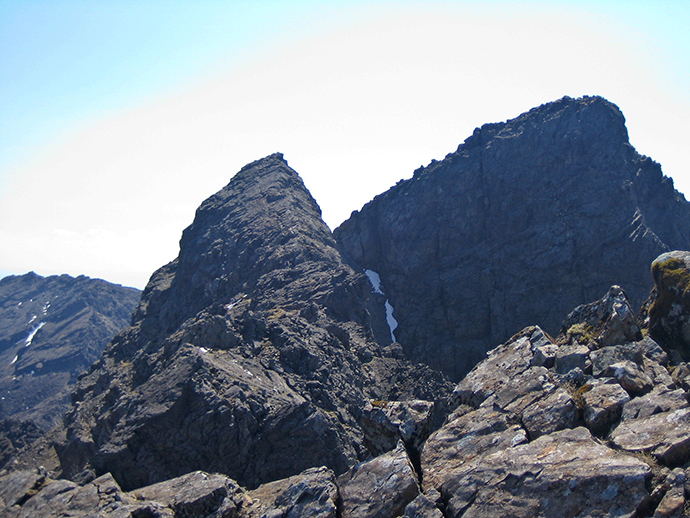 The In Pin from Sgurr Mhic Choinnich summit (Nev) 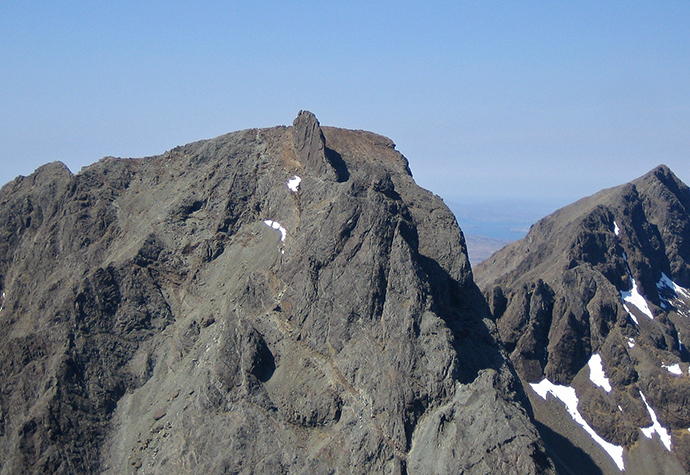 The In Pin from Sgurr Mhic Choinnich summit - zoomed (Dave) Paddy and Dave just past the crags (Nev)

We soon made it back to the level ground where we had left our packs. I was glad to be able to take off the harness and my jacket (I only wore it to carry my camera). With Monday’s hot, sweaty descent in mind I decided the wear my helmet over my cap – this proved a good move as it kept the sweat from running in my eyes (and stinging) and the sun off my face. Quite how I can feel so secure and sure of myself whilst scrambling, but once on movable rocks feel so unsteady I’m not sure. I suppose the answer is that it’s the contrast with being in control and decidedly not. Just below the top at the start of the scree slope, the rocks were larger, less deep and more unpredictable than further down. I felt like I was bringing the whole mountain down, but apparently no more than anyone else. Paddy virtually ran down, followed by Dave who was only a little slower. The guy from the team behind us did run down. Having sat down twice when my legs unexpectedly moved down the scree I eventually found the second half easier. The stones (as they were now) were deeper and moved to order – it was nearly like descending the snow slope last Sunday. Safely down I welcomed a drink for a very dry throat – that was not fun at all. 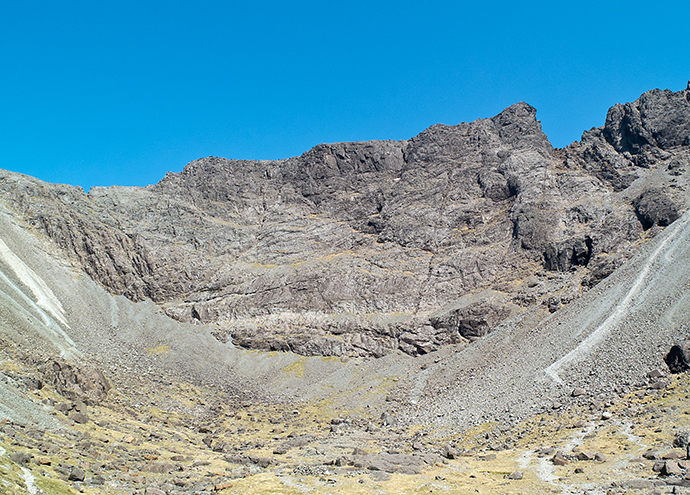 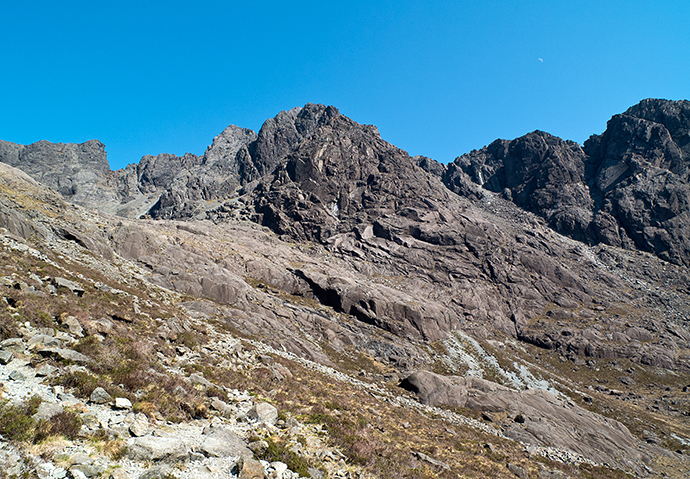 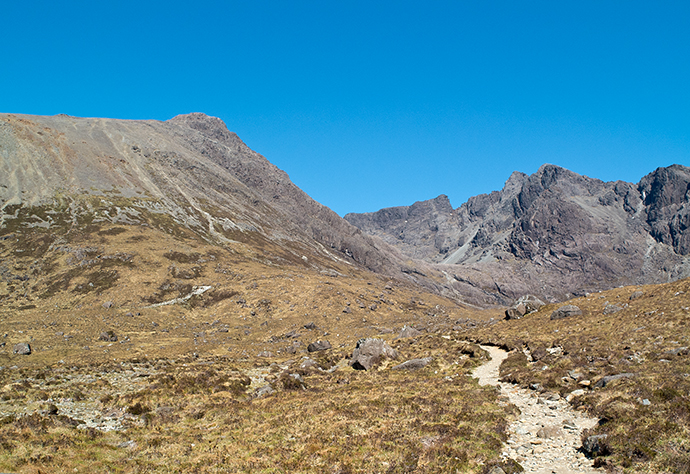 Looking back towards Coire Lagan (Nev)

Once past the slabs we could take our helmets off and could enjoy the gentle descent to the car park. Once again Neill was waiting with a cold Peroni.

We bade our farewell to Paddy – we’d had a wonderful 4 days in as good weather as you could possibly wish.

Back to our cottage; a shower and then our end of week treat – no cooking – a meal and beer in The Old Inn at Carbost. Luxury. 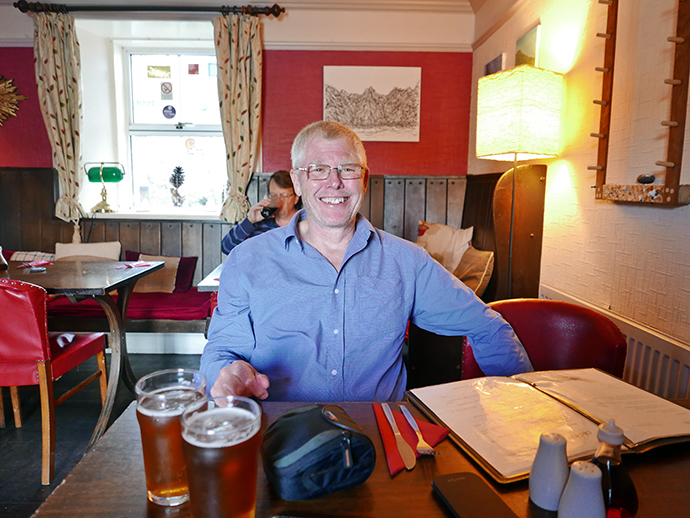 We enjoyed a slow start the following morning – and a fried breakfast. The car had to be back in Inverness by 4:30 pm, so we left at 10:30 am thinking that we would enjoy a leisurely drive though Torridon with lunch on the way. It was no to be. Sadly, a young woman lost control of her car just outside Broadford and lost her life; she was 33. It brought it home to us all; life is so precious – we had just enjoyed an amazing week in the most beautiful of surroundings. She had her life taken from her whilst she was in her prime. You can be on top of the world one minute and gone the next – live for the moment! We only ‘lost’ 3 hours; she, considerably more.

Back in Inverness we enjoyed a hearty meal in The Filling Station before boarding the sleeper – a couple of malts/glasses of wine and then off in the land of nod until Euston. 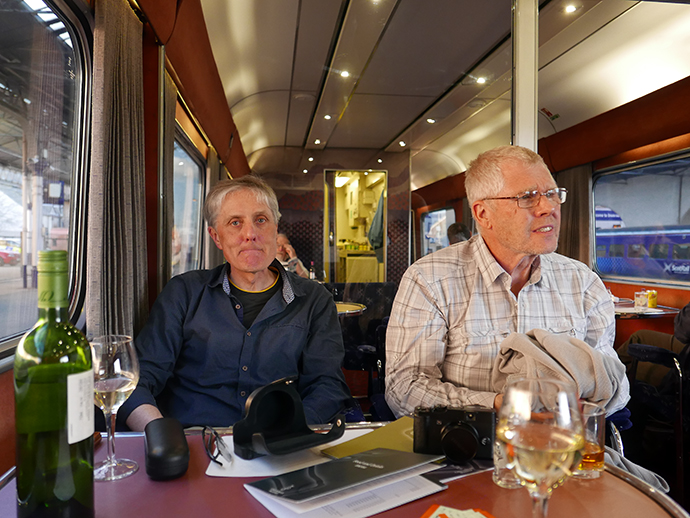 Dave and Nev on the sleeper (Neill)

And a very timely one too. Looks like I'll be doing this hill either as my last or second last munro so your report is really useful.


As for short roping, I'm a huge fan ! It certainly aids much needed confidence and keeps you moving at a steady pace.