I had always fancied a second attempt at the Lochaber traverse after trying it before with a buddy and getting rained off after Sgurr Choinnich Beag (or rather, I got rained off, I think Martin was quite happy to steam away inside his Buffalo come hell or high water...).

Originally I had devoted this weekend to the Mullardoch circuit, however my companion for the weekend and I both started to doubt our fitness for the route, and also only had two days off so didn't think we should rush it. After we discussed Torridon or Skye my decision was made for me when my work sent me to a 3pm meeting in Leeds on Friday afternoon

I agreed with Monty that he'd head up to Skye on the Friday night to meet our mutual friends and I'd go solo for the weekend, I didn't fancy trying to get to Glen Brittle after leaving Leeds at 5pm!

Aaaanyway, leaving Edinburgh Saturday morning meant a midday start to the hike at Spean Bridge Train Station, enjoying the sunny and leafy hike along the road and up the start of the Lairig Leacach track. I'd done this at least twice before so was keen to get it over with and get up onto the ridge, however I did take a brief diversion to check out one of the old tramway bridges. Trying not to hum the Indiana Jones theme tune

The trudge up Sgurr Coire Gaibhre was pretty uneventful but the final reveal of Stob Coire na Ceannain made it worthwhile and felt like I had started the ridge proper. Although it's not a normal part of the traverse, I hadn't visited Stob Coire na Ceannain and had heard fine things about the short ridge connecting it to the main ridge. Looking back on the ridge, obvious where the name 'Grey Corries' comes from!

The remainder of the ridge passed in a little bit of a happy daze. As I had 'ticked' these hills before I just settled into a stroll and followed the ridge without paying particular attention to which hill was which, and since I had all day in which to reach my intended bivvy spot between Sgurr Choinnich Mor and Sgurr Choinnich Beag, I didn't pay any attention to my pace or the time either! First other hikers of the day, approaching Stob Coire Easain

I was running badly low on water by this point, although someone had left an unopened can of coke at one of the cairns which I took it upon myself (as a good citizen) to 'tidy away', only drinking it to save weight in my rucsac... Sgurr Choinnich Mor with the Mamores, more impressive than 'Big Mossy Peak' would lead you to believe. Final pull to the top of Sgurr Choinnich Mor

Once atop Sgurr Choinnich Mor I realised I still had hours of daylight left and no real compelling reason to stop. I didn't really think I'd make the summit of Nevis before sunset, but did like the thought of making it to Aonach Beag at least, so I continued on. Sgurr Choinnich Beag, beginning to feel the burn with a whole lot of climbing still to go... Top of the scary bit onto Aonach Beag, looking down to Sgurr a Bhuic

I was pretty confident in my choice of route from Sgurr Choinnich Beag to Aonach Beag, but as I got closer I started to wonder, there were two steep grassy rakes which seemed to terminate in a slightly steep and slabby rocky looking bit. Up close it was definitely steep and felt quite exposed, although there was a beaten path to follow which reassured me I wasn't forging some daft first ascent!

The final few moves were a little scrabbly and nervous due to the exposure but ultimately nothing too difficult, although I don't mind admitting feeling more nervous doing this than anywhere on the Aonach Eagach! Reaching Aonach Beag took longer than I expected with more ascent and distance than I'd really prepared for, however I was rewarded with my first sighting of a pair of Snow Buntings foraging on the large snow patch still on the summit. Aonach Mor came and went with slightly less of a struggle and I was soon standing dubiously at the top of the incredibly steep and loose path descending to the bealach between the Aonachs and Carn Mor Dearg.

I actually enjoyed the descent despite my reservations, very steep and loose yes, but equally quite impressive and a quick way to lose height! Watershed ridge (descent from Aonach Mor just to the right of the obvious gully directly behind).

The Watershed ridge to Carn Mor Dearg seemed like fitting reward for the descent though, and a nice precursor to the Carn Mor Dearg Arete. Reaching the summit at 9:30pm I knew for certain I'd reach the summit of Nevis and took some time to enjoy the views and sunset from CMD. 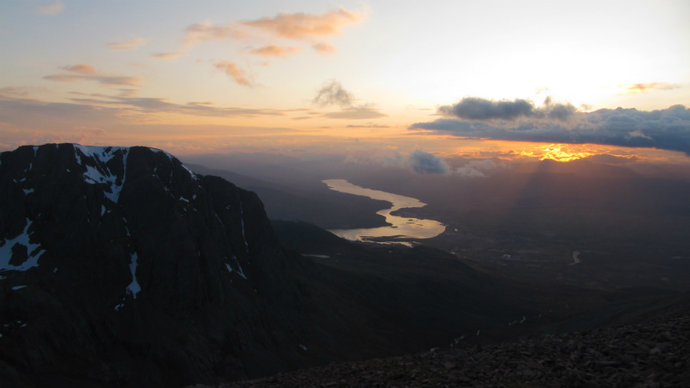 I wanted to do the Arete justice but the slow pace was beginning to frustrate me, and anyway, I'd done it before and will do it again, so I dropped down onto the bypass path and followed that round, spotting some precariously perched people bivvying on the south-east facing slopes. The final push from the Coire Leis abseil post could only generously be described as 'steady'. There was a frustrating feeling of making no progress up the monotonous boulder slope but slowly slowly the gradient eased and the summit came into view. Empty, silent and worth it!

I was too stiff and sore to explore the summit so made a beeline for the shelter where I planned to sleep. The summit was still and silent and I enjoyed the flickering lights of the A82 beneath me as I dined on chicken curry and 'Irish' hot chocolate I slept fitfully, as I usually do when camping, but enjoyed poking my head out of the door of the shelter every hour or so to see the changing light in the sky.

At about 4:30am I was awoken by the call of the resident Snow Bunting and a clear, beautiful sky. Hard to miss when he's sitting on the roof of the hut! 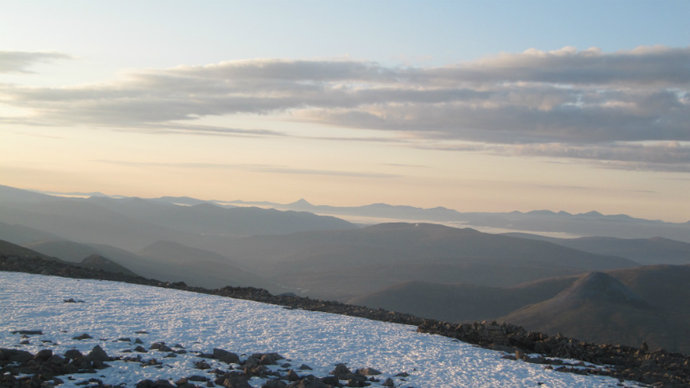 The first Three Peakers showed up at about 5:30am and after that a steady trickle of people started to appear from the slopes below. I took some time to litter pick on the summit then fell into step with John from Newcastle who had some great chat and was in no rush to descend, happy to wait for me as I continued my impromptu (but increasingly obsessive-compulsive!) clean up exercise.

By the bottom of the track I had a full garden refuse sack of garbage that was getting tiring to carry, including any number of broken poles, abandoned clothing (including one hat which I later suspected had just been left by someone on their way up

) half eaten bananas etc. etc. It was too nice a day to get angry about the mess though, especially since all the people we met on their way up were so pleasant and friendly (if occasionally clueless). Nice to see people enjoying the hills even if the price we pay is one 'honey-pot' mountain that needs a little extra TLC occasionally...

Yet another weekend better than the last, Scotland continues to exceed itself!

Great sunset picture and hats off for the wombling!