I had taken a couple of Annual Leave days at the end of May in the hope of getting a walk done, and surprisingly enough the forecast was actually for a dry spell, and maybe even a bit of sunshine

. Tom (my regular walking crony from the choir I sing in) was working needless to say, but Donald - another Bearsden bass section stalwart - kindly offered to accompany on a couple of the Black Mount Munros I still had to do: Stob a'Choire Odhair and Stob Gabhar.

our_route.gpx Open full screen  NB: Walkhighlands is not responsible for the accuracy of gpx files in users posts
It hopefully wasn't too huge a round, so we got a relative 'long lie' and didn't set off until 07:30. We got a good run up the road and arrived at the Victoria Bridge car park shortly before 9 a.m., to be greeted by the encouraging sight of Ben Stavros and pals basking in morning sunshine out to the west

. There was hot debate over the identity of the pointy wee hill in the middle left, but we eventually decided it was probably one of Starav's Tops with a particularly pleasing name, Stob an Duine Ruaidh - 'Peak of the Red-Haired Rascal' 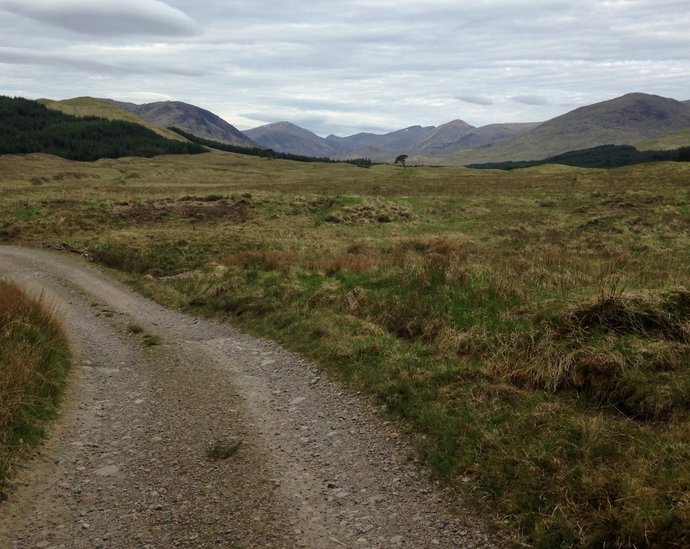 We followed the track west from the Victoria Bridge car park as far as Clashgour Hut, a rather unprepossessing green shed that remarkably enough seems to have started off life as a schoolhouse, but now belongs to the University of Glasgow Mountaineering Club. Just past the Hut, the ascent path leaves the track on the right, to ascend gently on the east bank of the Allt Toaig. Encouraged by the sunshine and the gentle gradient, we set off at a fast pace - probably too fast for me, in retrospect. Donald may be a tad older than I am, but he 'compleated' the Munros years ago and he is definitely in better physical shape than me. 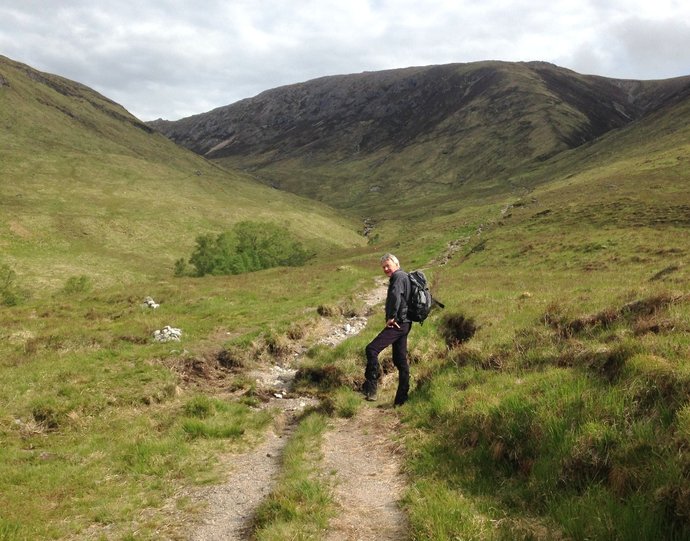 As we ascended gently up the glen, the top of Ben Lui was just visible behind us, still with a fair bit of snow on it 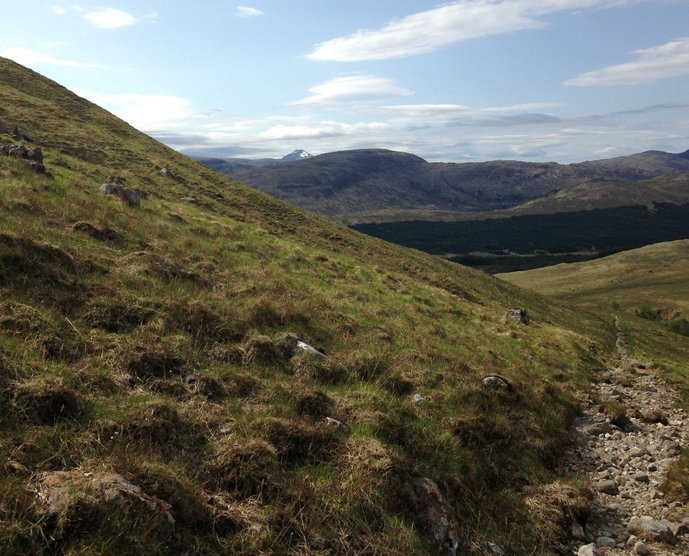 The Allt Toaig path is in very reasonable nick, and it wasn't long before we started the climbing proper, on a side path that leaves the main path on the right at the Allt Caolain Duibh (a tributary burn of the Allt Toaig) to ascend the easy SW ridge of Stob a Choire Odhair. 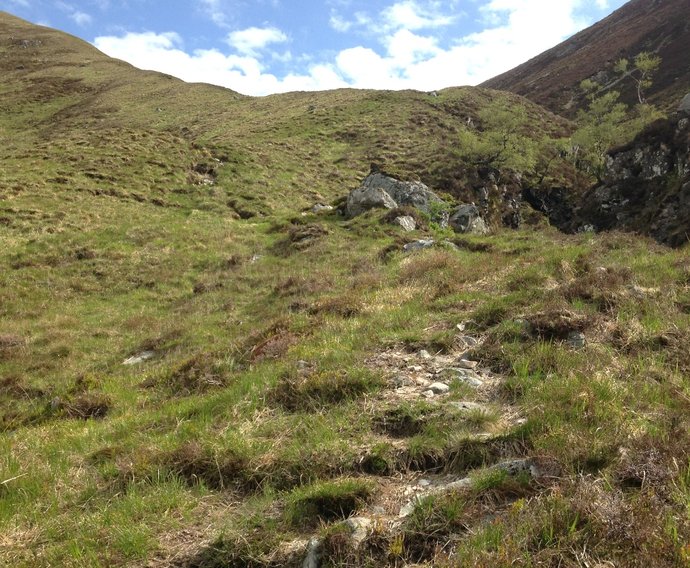 'Easy SW ridge' it may be, but I'd tired myself out a bit on the approach, and I was soon peching and panting, doing my best to keep up

. Thankfully Donald was patient with me and slowed the pace a bit, and there was plenty of grand scenery by way of distraction from the physical effort. About halfway up, Stob Gabhar's grand eastern corrie, Coirein Lochain, started to come into view. 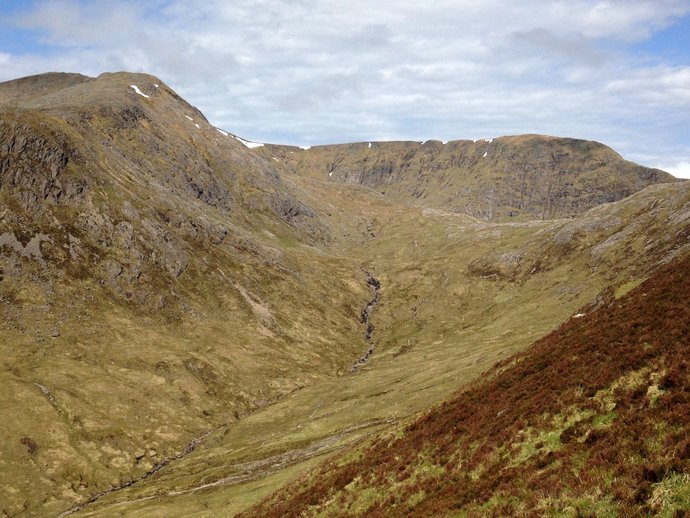 It wasn't too much longer before we arrived rather suddenly at Stob a'Choire Odhair's summit cairn - a surprisingly spectacular moment, with the whole vast watery wilderness of Rannoch Moor spread out below us: fantastic! 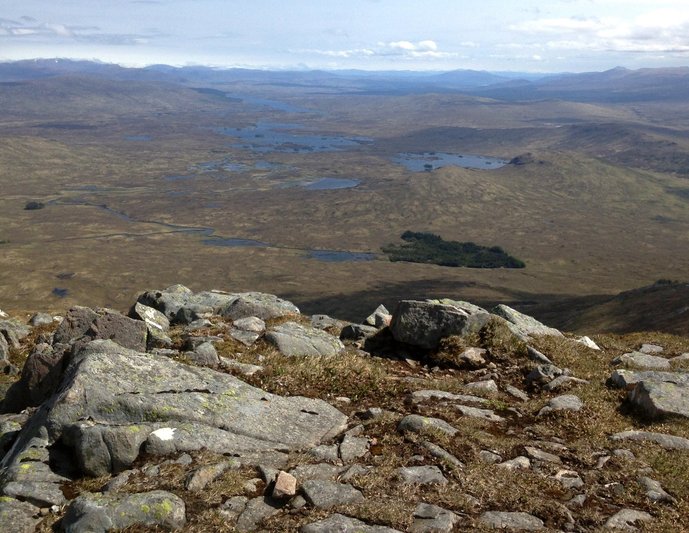 Stob Gabhar was also looking terrific, if a tad intimidating, over to the east - and the large lochan that inhabits Coirein Lochain was now visible too, glinting in the sunlight. Stob a'Choire Odhair may be relatively small and rounded by the standards of most Munros hereabouts, but it's certainly a cracking viewpoint. To the north, the former Munro (now Top) of Clach Leathad was particularly impressive, with the two remaining Black Mount Munros, Creise and Meall a'Bhuiridh, lurking behind it. 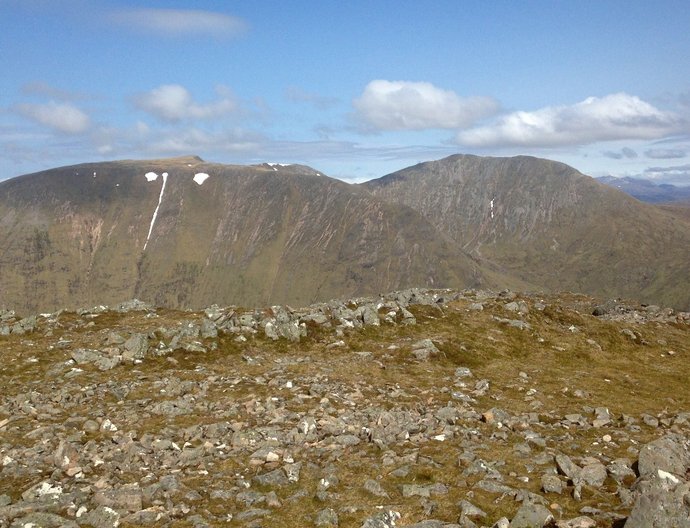 Donald at Stob a'Choire Odhair summit with the Cruachan massif in the distance: 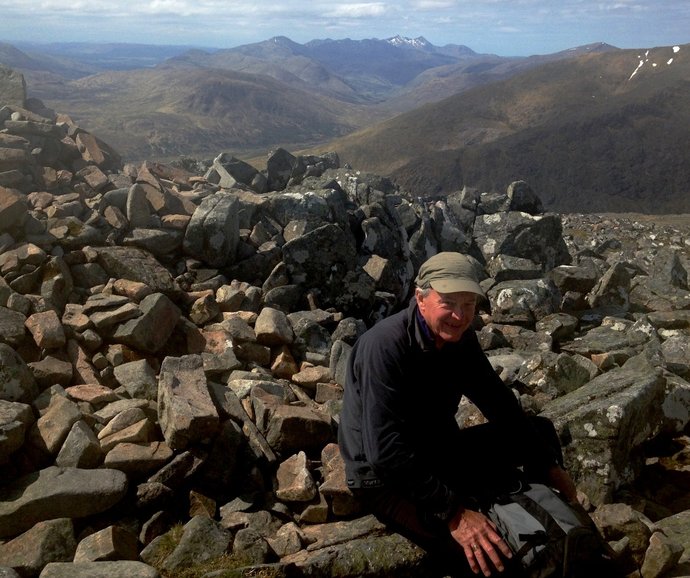 We set off on a good path down Stob a'Choire Odhair's west ridge, in the general direction of the decidedly more challenging Stob Gabhar. 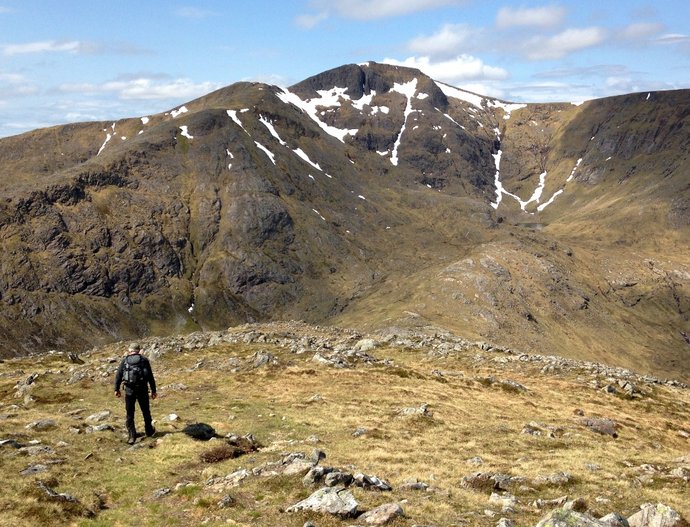 There was a great view back the way over Stob a'Choire Odhair's shoulder to Rannoch Moor. 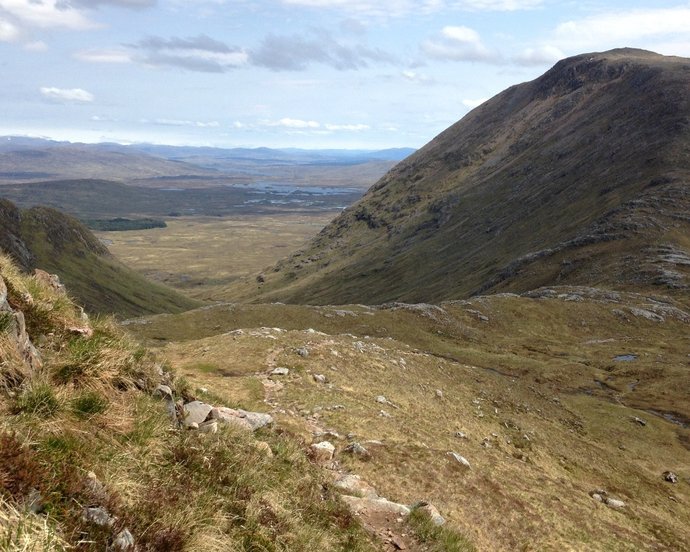 We stopped for lunch just at the southern rim of Coirein Lochain, immediately before the path starts the very steep and loose ascent up to Stob Gabhar's southwestern ridge, the scarily named 'Aonach Eagach' (not the famous 'Aonach Eagach' in North Glencoe, though - this is a lesser known one with the same name

). Sadly I hadn't quite got my breath back yet and I didn't have much appetite, but at least the view down to the lochan made up for it 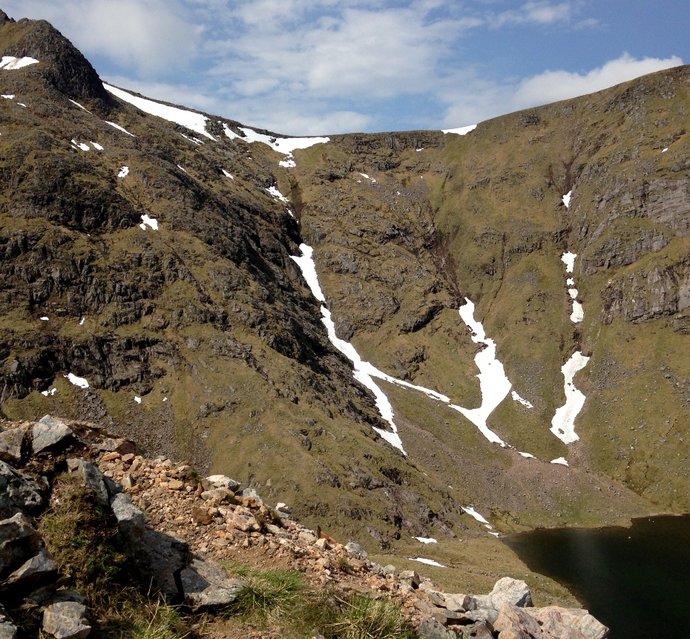 However, it was now time to tackle the Steep Bit. Actually, although there were scrambly bits and some boulderfield to cross, it wasn't really as bad as it had initially looked and it should have been straightforward enough, except that I started to get cramp in my quads and came over a bit pathetic, requiring regular rest stops. At least the scenery provided regular excuses to stop for photos! About halfway up, the northern rim of Coirein Lochain - known as 'Sron na Giubhas' - was looking very impressive, with Ben Nevis attempting to photo-bomb the shot in the background: 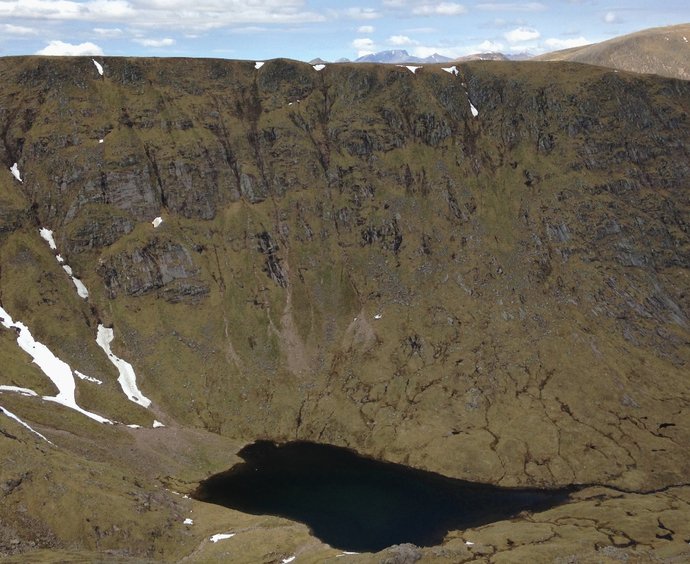 Almost up on the Aonach Eagach ridge now, but Stob Gabhar summit still looking a long way up 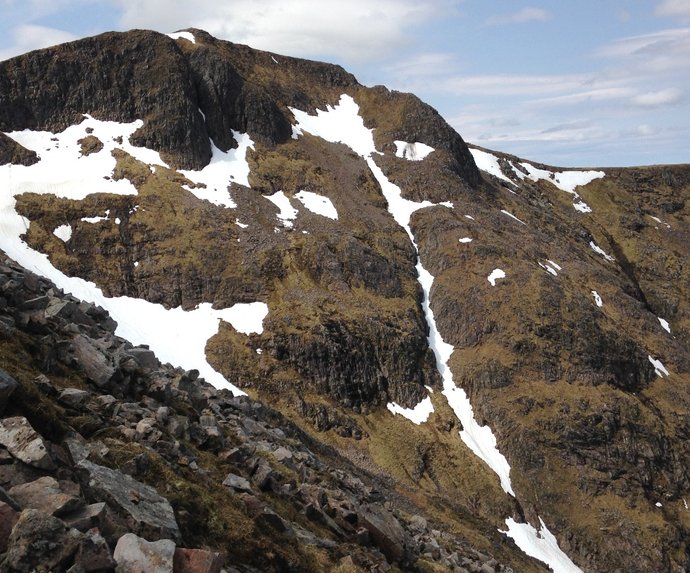 Eventually we topped out at the southeastern end of the Aonach Eagach ridge, with Stob a'Choire Odhair and Rannoch Moor still looking great back to the west: 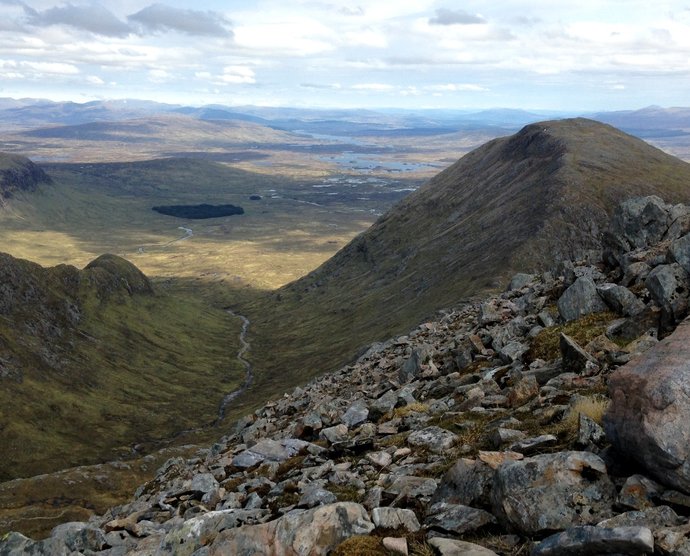 The ensuing Aonach Eagach ridge walk was thankfully nothing like as scary as its Glencoe namesake: it's a great wee ridge with the occasional very mild scrambly bit, but on the whole it proved fairly straightforward, and it gave me a chance to get my breath back 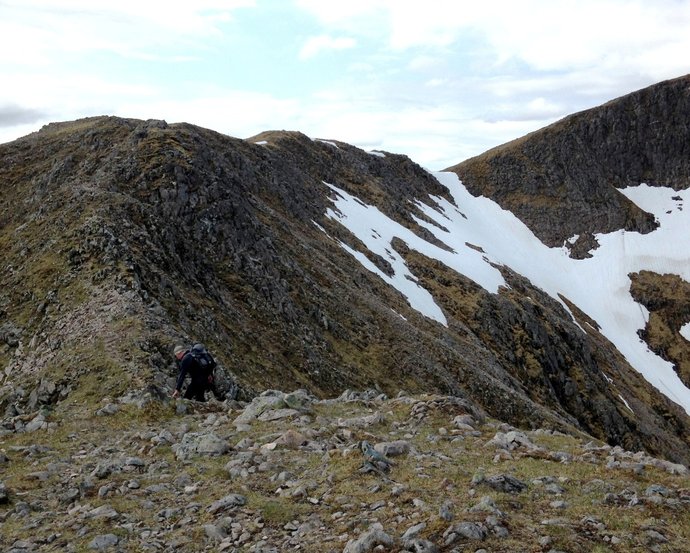 The high point of the ridge was in fact formerly listed as the Munro Top of 'Aonach Eagach', and it still boasts a fairly substantial cairn. This was the view out to the Cruachan massif: 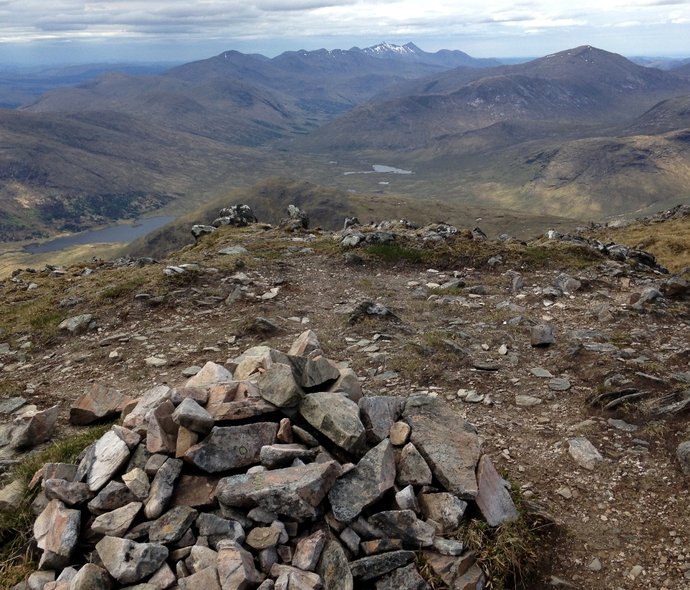 At the start of the final steepening to Stob Gabhar's summit, there was a nice vista back along the Aonach Eagach with Beinn Dorain and the other 'Wall of Rannoch' Munros all lined up in order waiting to be named, and those familiar twins Ben More and Stob Binian visible on the far right. 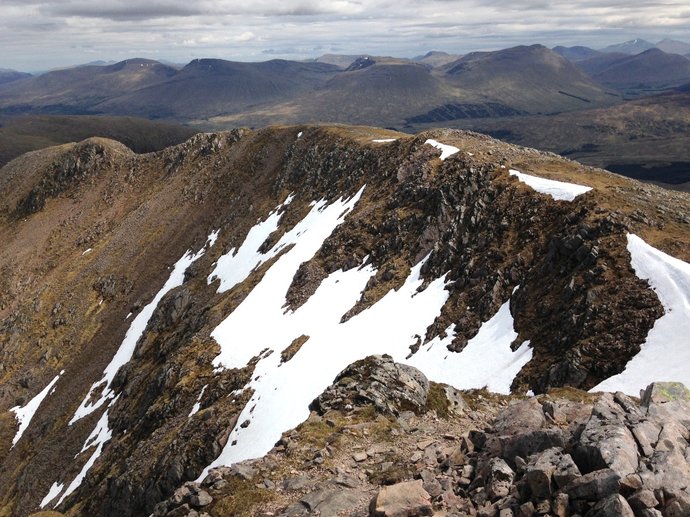 It wasn't too much further now to Stob Gabhar's sizeable summit cairn. This is one substantial hill, and I was very chuffed to have made it to the top! Stob Gabhar, like Bidean nam Bian, is one of these huge complex hills that can be tackled in various ways from varying starting points. One particularly tempting, though very arduous, option is the famous 'Clachlet Traverse' which ticks off all four Black Mount Munros on a linear route from Inveroran to the Kingshouse Hotel. That route would head off down Gabhar's huge northwestern ridge, known as Aonach Mor, before dropping down to the right to tackle Clach Leathad. There was a fantastic view of the Aonach Mor ridge from Gabhar's summit, with Ben Nevis inevitably getting in on the act again in the background. 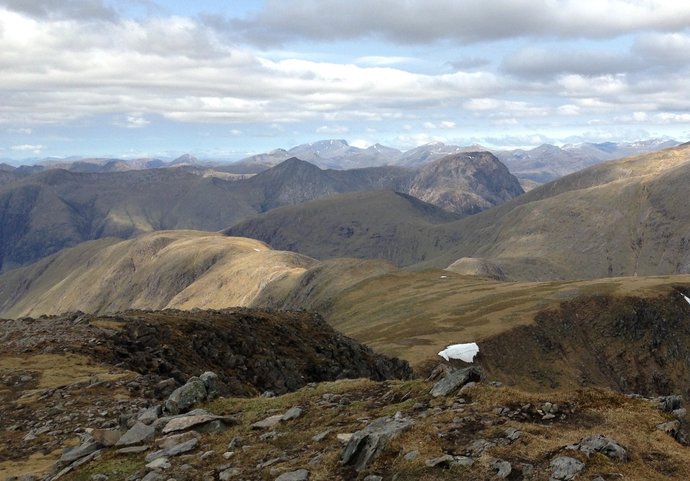 However, I probably need to get myself a bit fitter before I can tackle the likes of the Clachlet Traverse

. Today's plans were more modest, and we set off on the path back down Gabhar's summit cone towards the Aonach Eagach ridge. Unbelievably, I was a good couple of hundred metres off the summit before Donald pointed out to me that I didn't have my trekking poles ... D'Oh

! This isn't even the first time this year that I've done this (see my WR on Cairnsmore of Fleet for an even less edifying episode of the same) - honestly, I need to start wearing my poles on a chain round my neck or something

. I set off back for the summit to retrieve them, but in the interests of time Donald volunteered to go back instead, since he'd be quicker. Thankfully it took him no more than five minutes, and in the meantime I sat on a boulder and had a breather.
We re-crossed the initial section of the Aonach Eagach ridge, and then set off on a fairly clear path down the pleasantly easy ridge that forms the west rim of Coire a'Muic to the southeast of Aonach Eagach. There was a great view of Loch Tulla and a distant Ben More and Stob Binnein, and it was a carefree descent. 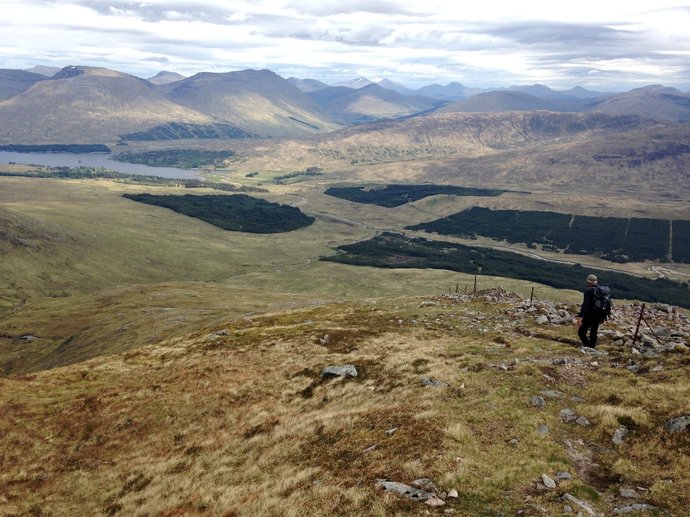 Carefree until we reached the lip of An Steallaire waterfall, anyway - at this point the path becomes a bit eroded as it makes a fairly steep zigzagging descent a bit to the right of the falls, and we needed our wits about us. This provided a bit of entertainment, however, and we got down without incident. The falls are probably much grander after a winter storm, but still impressive even during a dry spell like this. Once at the bottom of the falls, it was a straightforward stoat down the right side of the burn until we were down at the Allt Toaig, which we then had to cross in a mildly scrambly gorge (reasonably straightforward in dry weather but this could be very tricky if the Allt was in spate 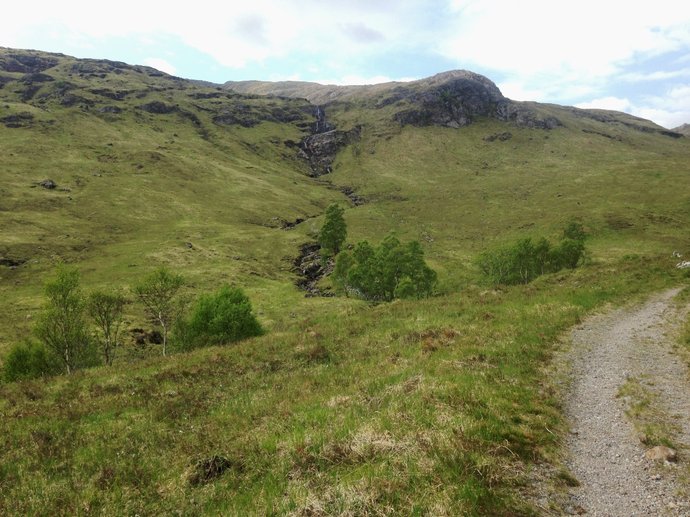 A really great day's walking this, and I'm very glad to have these two ticked off at last