I'm sure to many that the South Glen Shiel ridge and it's 7 munros is a walk in the park - but to an ageing unfit git like myself, this was without done the physically hardest thing I've ever done in my (nearly, but not quite) 40 years! It was epic on so many levels. They say a picture tells a thousands stories, so here are my pics from the day.

I followed this Walkhighlands route:


southglenshiel.gpx Open full screen  NB: Walkhighlands is not responsible for the accuracy of gpx files in users posts 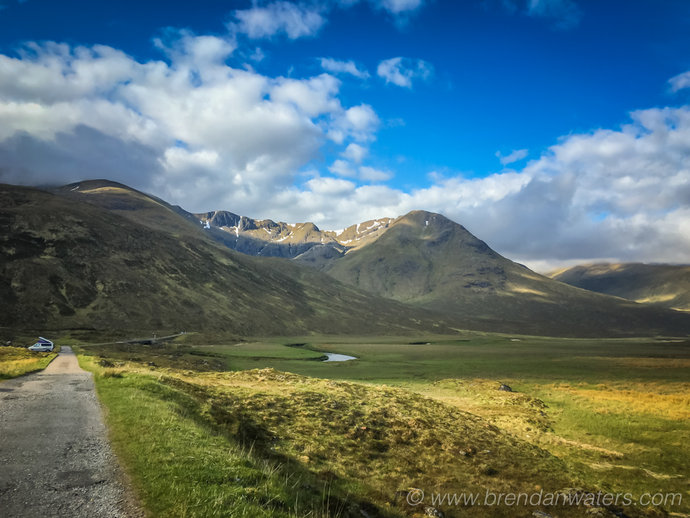 The start of the walk, looking up to the ridge. I'd dropped the car at the far end and hitched back to the start - couldn't face having to hitch at the end of the walk! 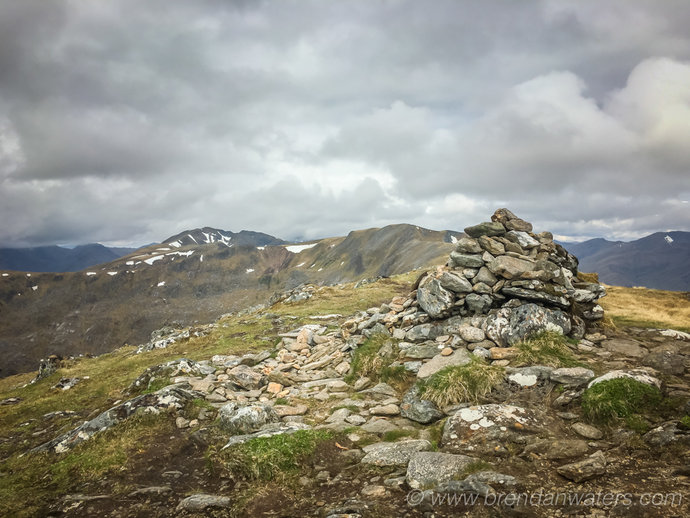 This was a fantastic view - after nearly 2h 20m, reached the first summit, Creag a'Mhaim, and saw the ridge stretched out to the horizon ahead - this was going to be a long day! 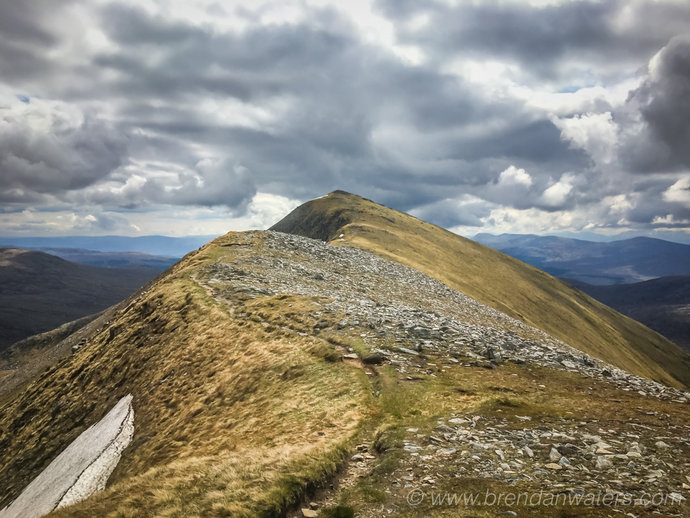 The ridge out to Druim Shionnach, the second munro of the day 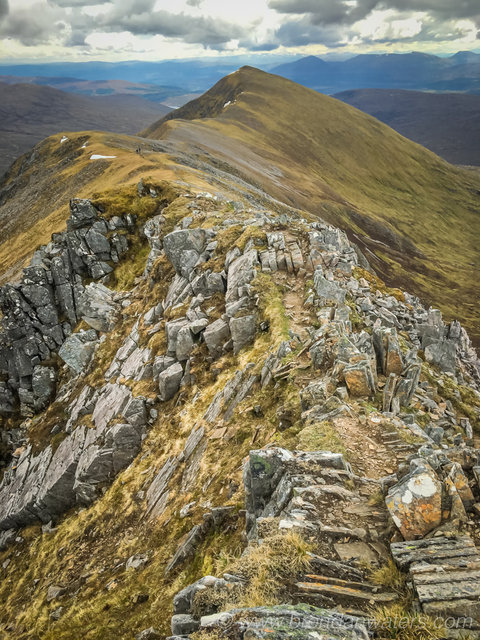 Part of the ridge out to Druim Shionnach got quite narrow, adding even more interest to the walk! 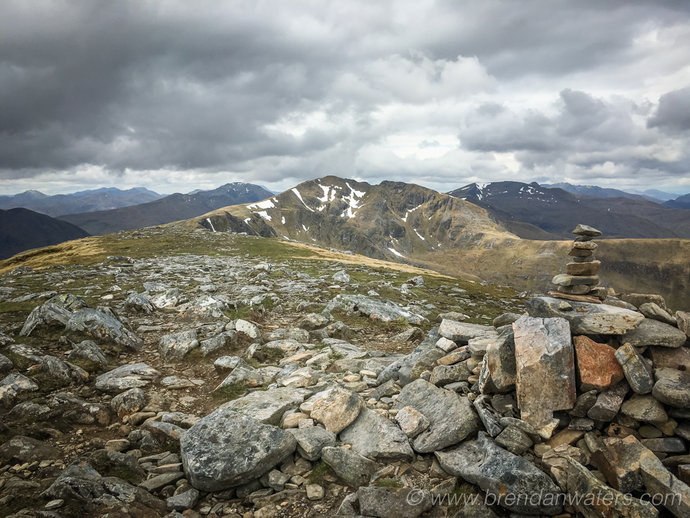 Munro 2, Druim Shionnach, of the day was reached after just less than an hour's pretty straightforward walking from the first. 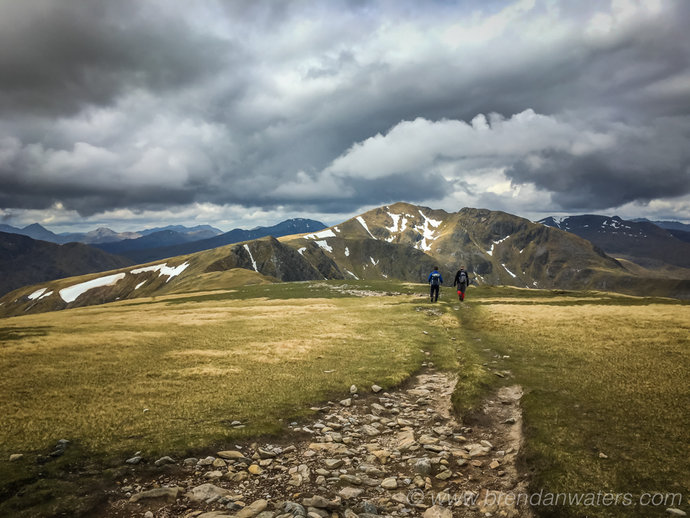 It was 3km to munro 3, Aonach air Chrith which at 1021 metres is the highest summit on the whole ridge. The guys in front of me were great pacemakers - keeping me on track and making sure I didn't doddle! 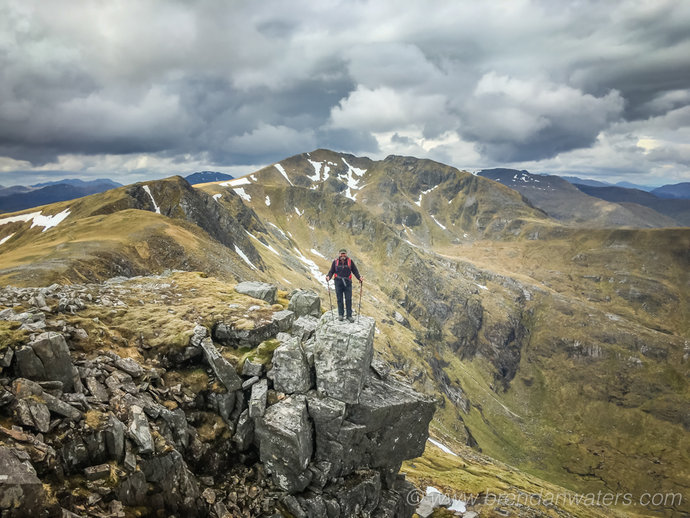 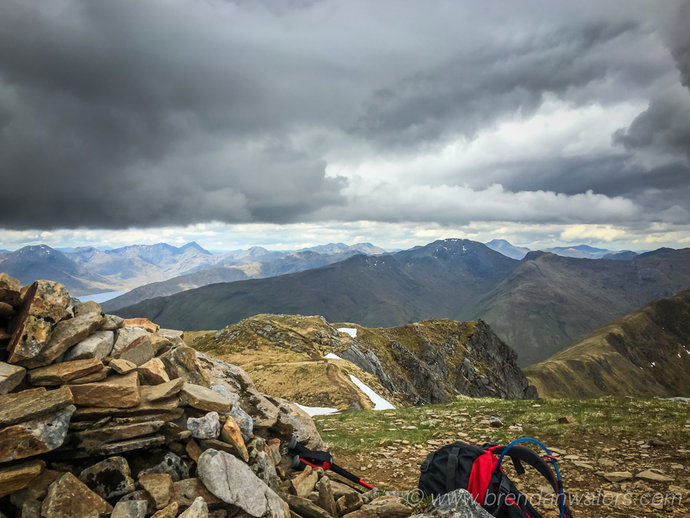 And after another hour, peak 3 was conquered, Aonach air Chrith. 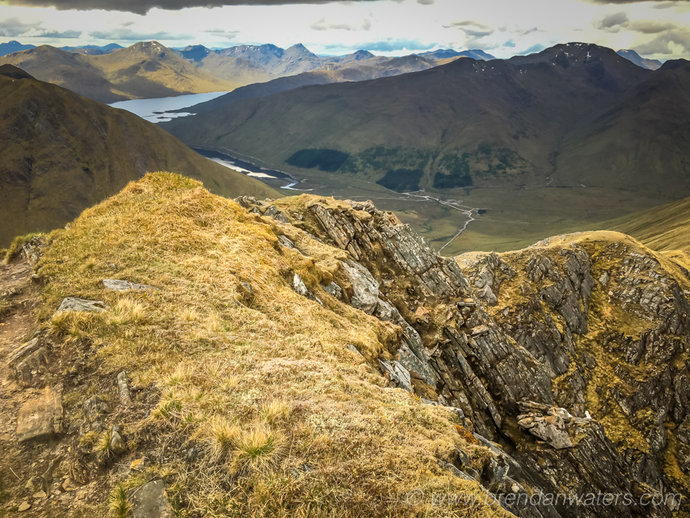 As you can see from this photo, there's quite a steep and narrow scrambly bit not long after the peak - tricky, but nothing too bad 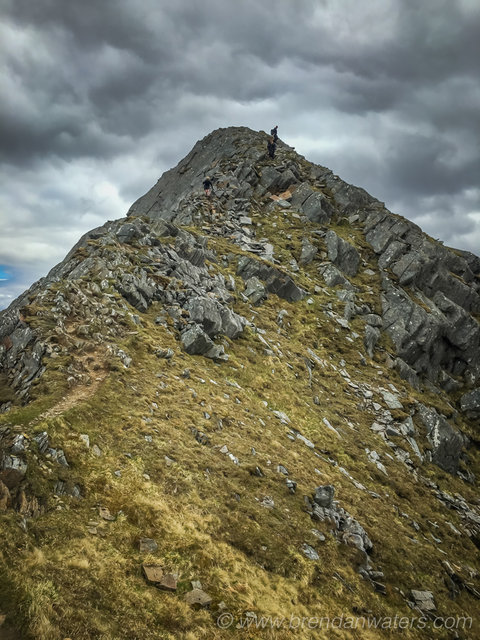 Looking back at that narrow section After about 1h 15m, the 4th peak was reached - Maol Chinn-Dearg. This photo looks back at the impressive ridge traversed so far. 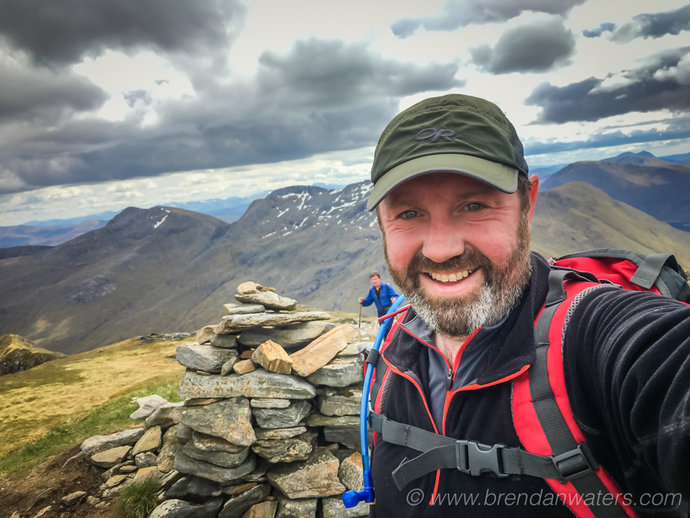 Starting to look a bit knackered! But I liked this photo, because one of the guys I met on the ridge, Chris (who volunteers for Cairngorm MR) looks like he's just sitting on my shoulder! 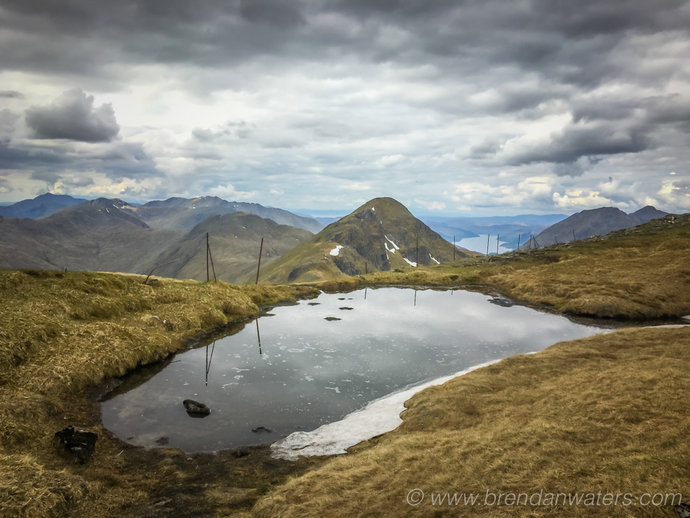 The 5th munro spurred out to the right of this photo, but this shows number 6 and then number 7 in the distance - the end was finally in sight! 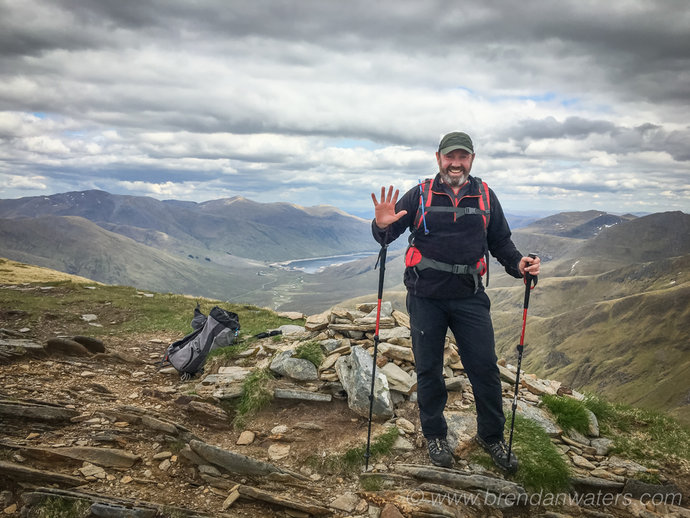 Proving that I can count to 5 at the top of the 5th munro Sgurr an Doire Leathain, reached an hour after the 4th. 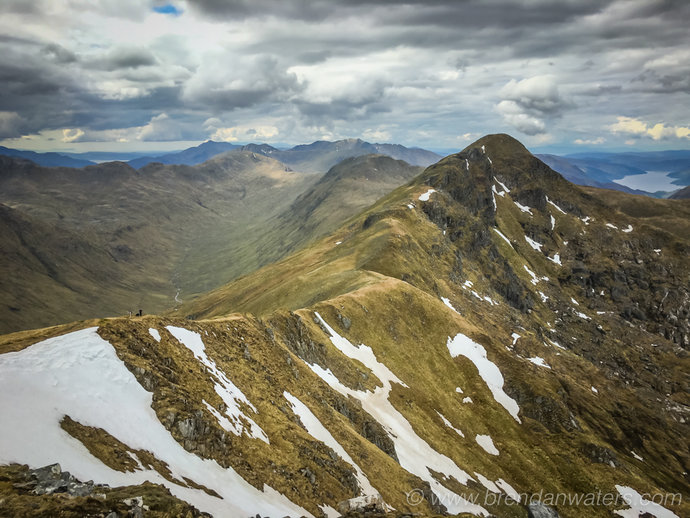 Probably the finest looking ridge and peak of the day, the shortish stretch out to munro 6, Sgurr an Lochain. 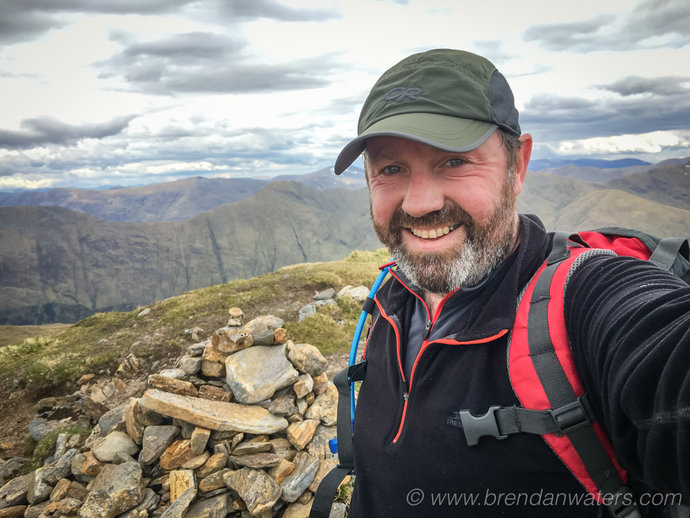 Munro 6 of the day - Sgurr an Lochain. This was only 40 mins from the previous peak, but the legs were beginning to struggle by this point! 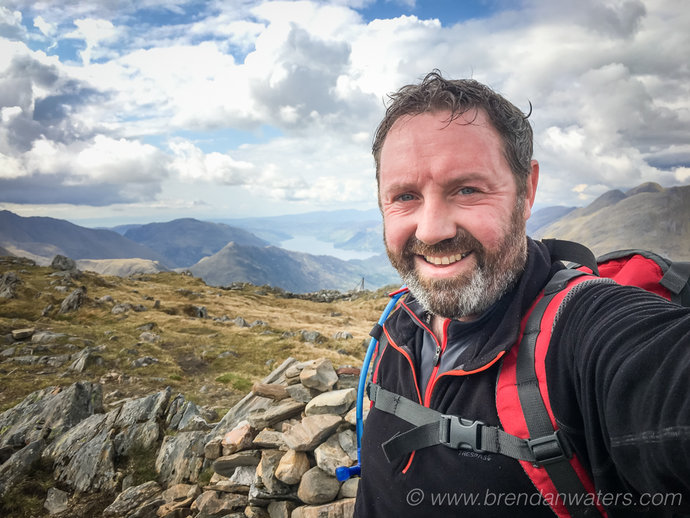 And finally, nearly broken, but happy as can be - NUMBER 7!! The peak of Creag nan Damh. My legs were properly knackered on the way up to this and I'd almost ran out of water - but, oh that feeling at the top! 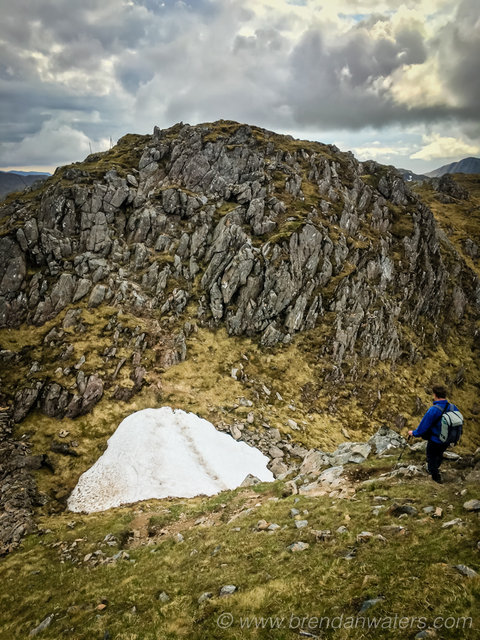 And just when you thought it was all over....not far from the 7th peak was this 10 meter high wall of rock! Who's idea was this?! After running out of water on the final peak, this stream half way down was the most welcome thing ever! And the best tasting water ever! 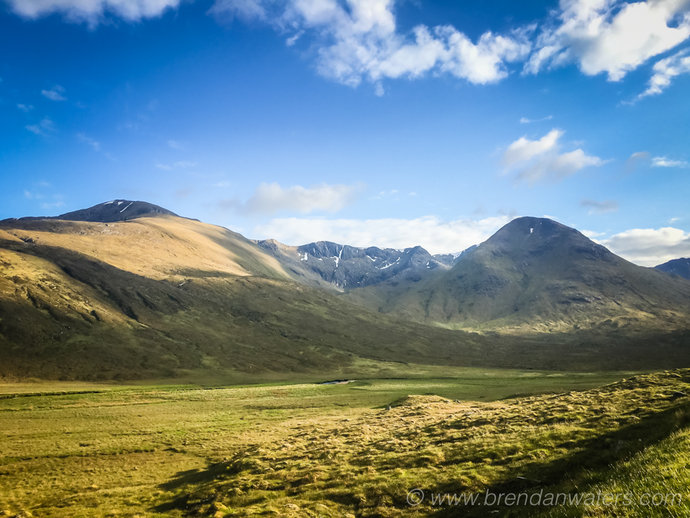 And a final look back at the ridge from the road - genuinely one of the best and hardest days of my life. LOVED it.