Glen Lyon Munros.gpx Open full screen  NB: Walkhighlands is not responsible for the accuracy of gpx files in users posts

I've been trudging the hills (very sporadically) since the eighties, but I'd never visited more than two Munros in one trip, so this weekend I decided was the time. After a bit or research on here I plumped for the Glen Lyon four...Carn Gorm etc. So I was on the road about 7am on Sunday and arrived at Invervar about 8.45. The weather was dull all the way up, but the promised sunshine arrived just as I pulled into the car park. There's parking for abut six or seven cars and a group of four lads was just setting off when I arrived.

The start of the walk is just out of the car park, turn left and walk about 50 yards down the road until you see a sign pointing you through a gate and into the woods, which are pleasant at first but soon turn into a messy plantation. 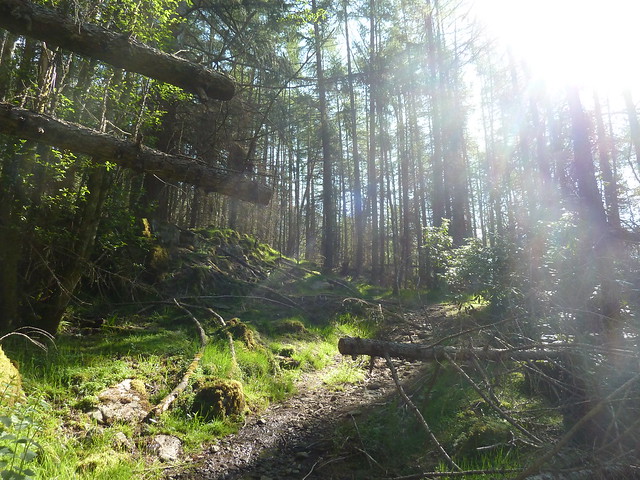 Several trees lie across the path at roughly chest height, so it's a good opportunity to practice your limbo dancing. After going through two or three gates, the path emerges into a building site next to the woods. It looks like there's quite a lot of activity going on here, but not on a Sunday it would seem. There are signs pointing walkers in the right direction, and the path to Carn Gorm is marked with green and yellow way markers. 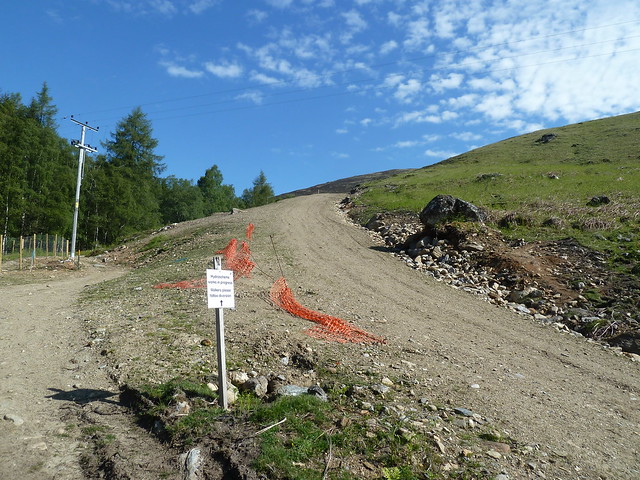 Path to Carn Gorm on the left of the track

The path follows the woods roughly north, with the Invervar Burn between you and the trees. Eventually though the path to Carn Gorm branches off to the left and crosses the stream on a very rickety bridge, climbs sharply for a bit and then leads you out into more open country. 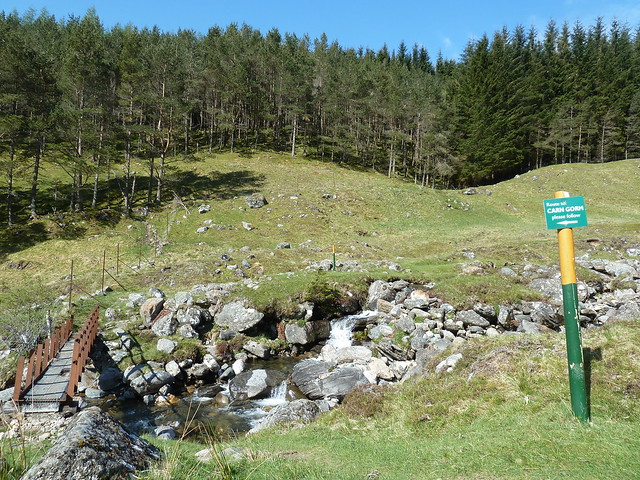 Crossing of the Invervar Burn 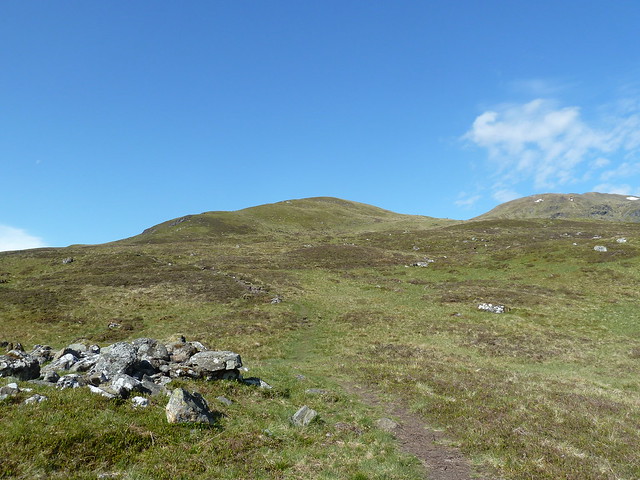 The approach to Carn Gorm is mostly easy going, punctuated with occasional steep bits (but nothing too serious). It's a bit featureless to be honest, but there are nice views all around, and the weather was glorious...bright sunshine with just enough of a breeze to refresh.

Reached the summit after about 2:15 of walking. The group of four who had set off before me were just about to leave and an Irish guy who had overtaken me on the final push for the summit stopped for a brief chat. There are two summit cairns, the northernmost one with a collapsed triangulation pillar amongst the rocks, but the map suggests that the south cairn marks the true summit. There are great views of the Lawers range to the south and Loch Rannoch to the north. 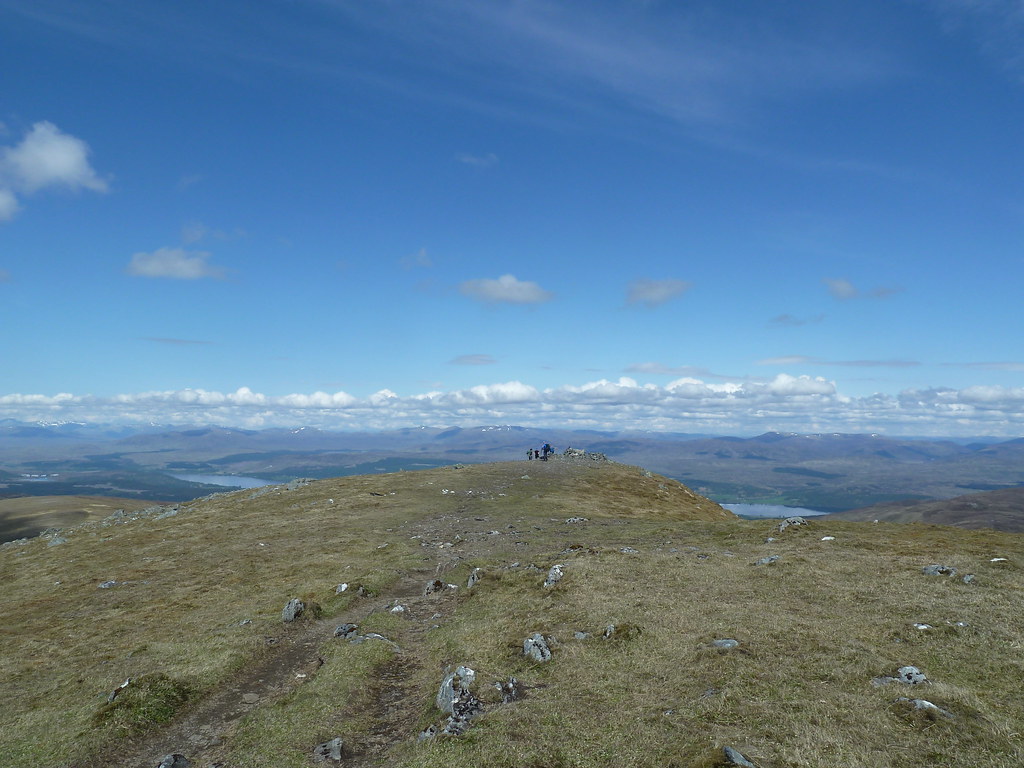 Summit of Carn Gorm with Loch Rannoch behind 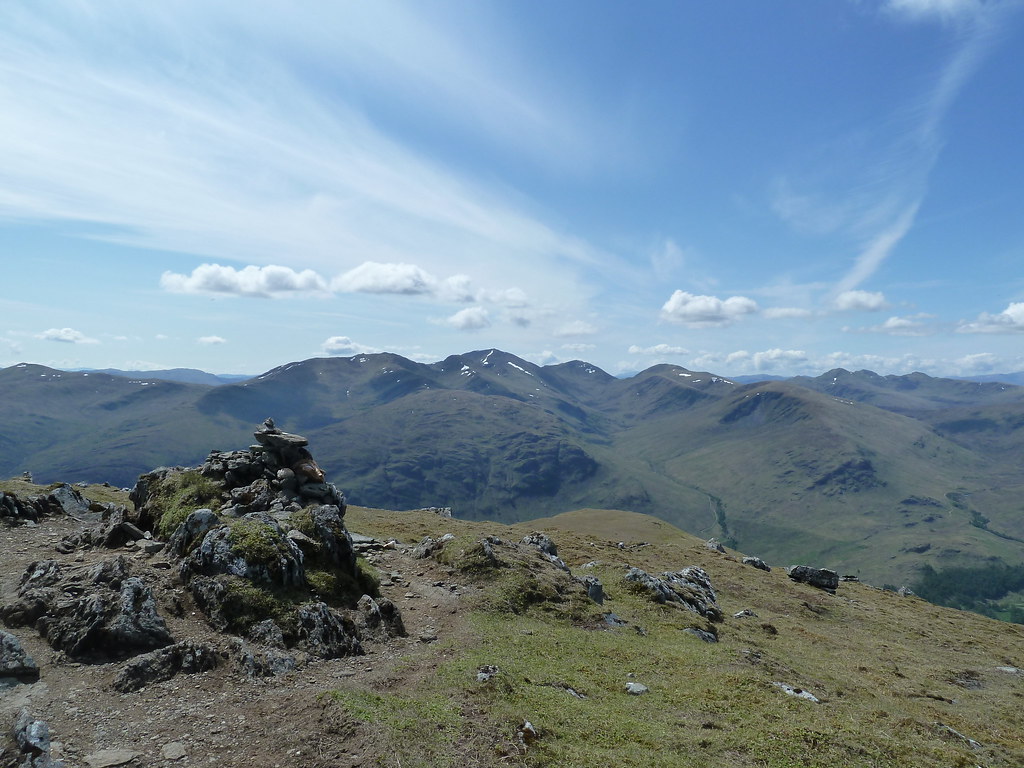 From here the descent north towards Meall Garbh is straightforward and the path is impossible to lose...but somehow I managed to lose it! The path skirts around An Sgorr before climbing up to Meall Garbh, but with head down and daydreaming I found myself going all the way round An Sgorr on a minor path heading back to Invervar...luckily I realised I'd gone wrong after a few hundred yards and quickly retraced my steps and started the ascent to Meall Garbh, which is a very straightforward trudge as far as the start of a fence line, where it gets a bit more bouldery and a bit more care is needed on the final approach to the summit. 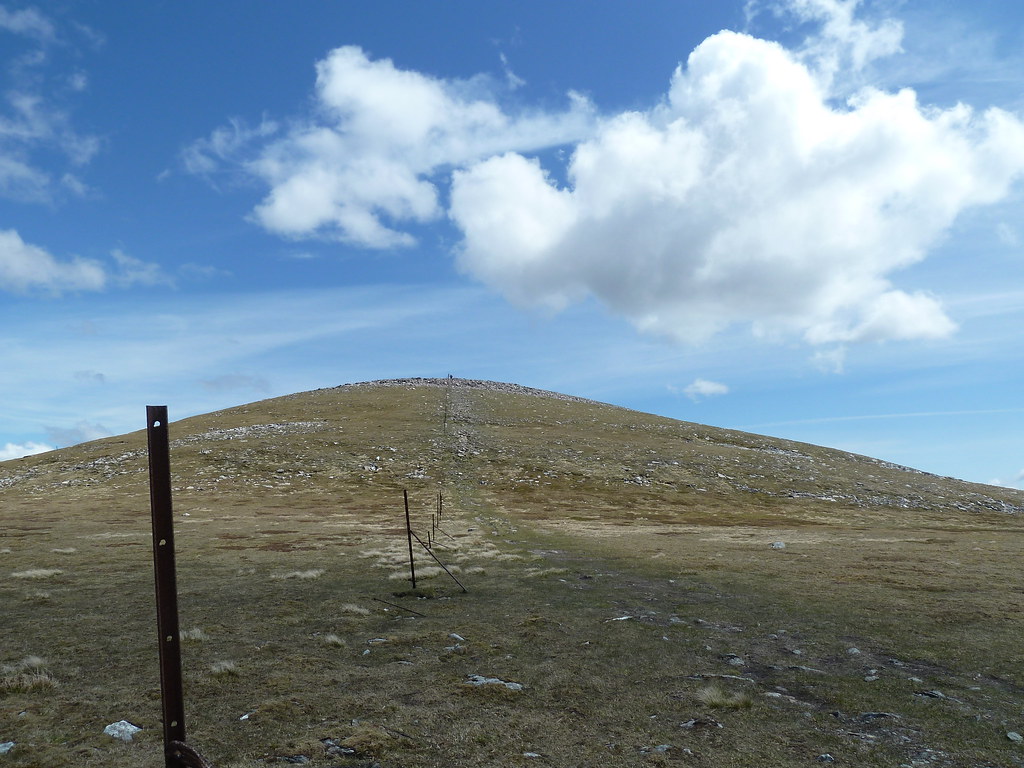 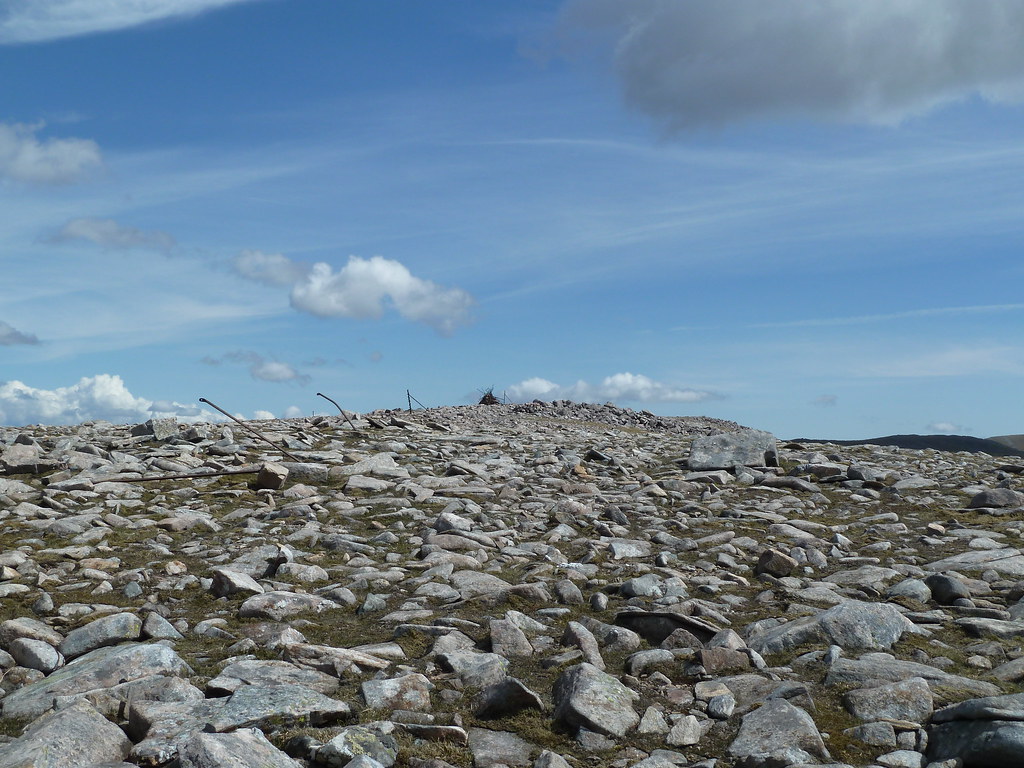 From a distance the summit of Meall Garbh looks like it's got a bonfire on top of it, but on closer inspection it's actually a pile of metal fence posts. It took me about an hour to get here from Carn Gorm summit, but that included my wee diversion. The views are good, but it's not the most picturesque of summits, so I didn't hang around. 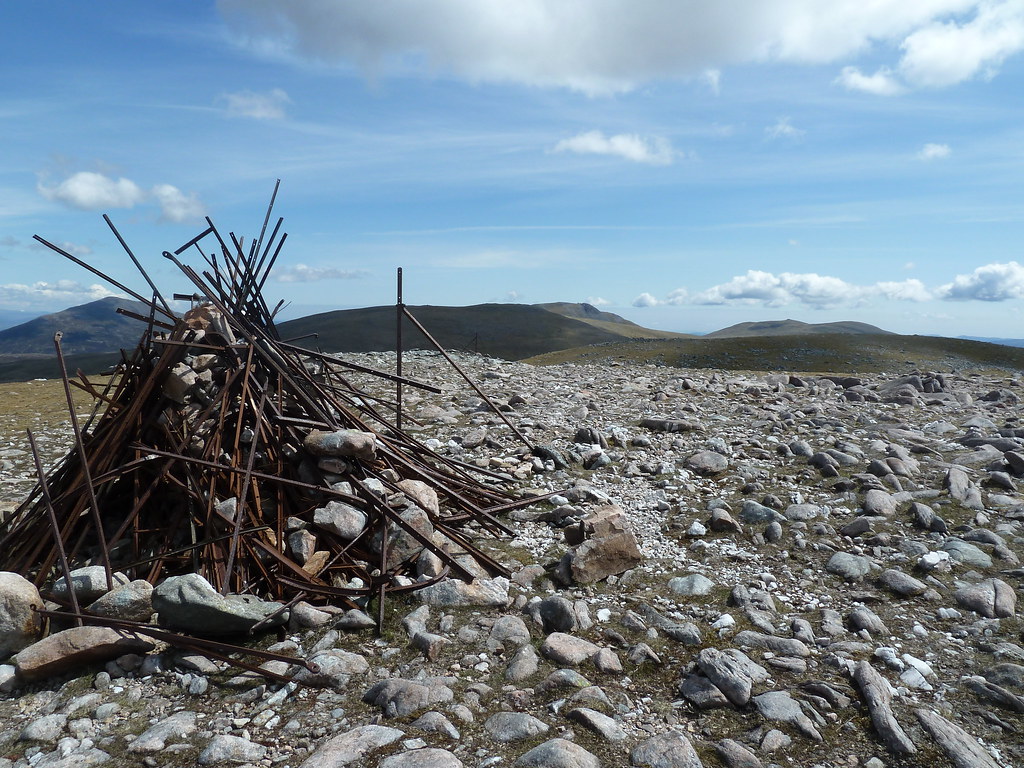 The descent to the bealach is gentle but rocky, and before the path started climbing again I decided to stop for a spot of lunch. Refreshed, it was time to begin the ascent of Meall a' Bharr. At this point Schiehallion begins to loom large in your eyeline, and a fine sight it is too. 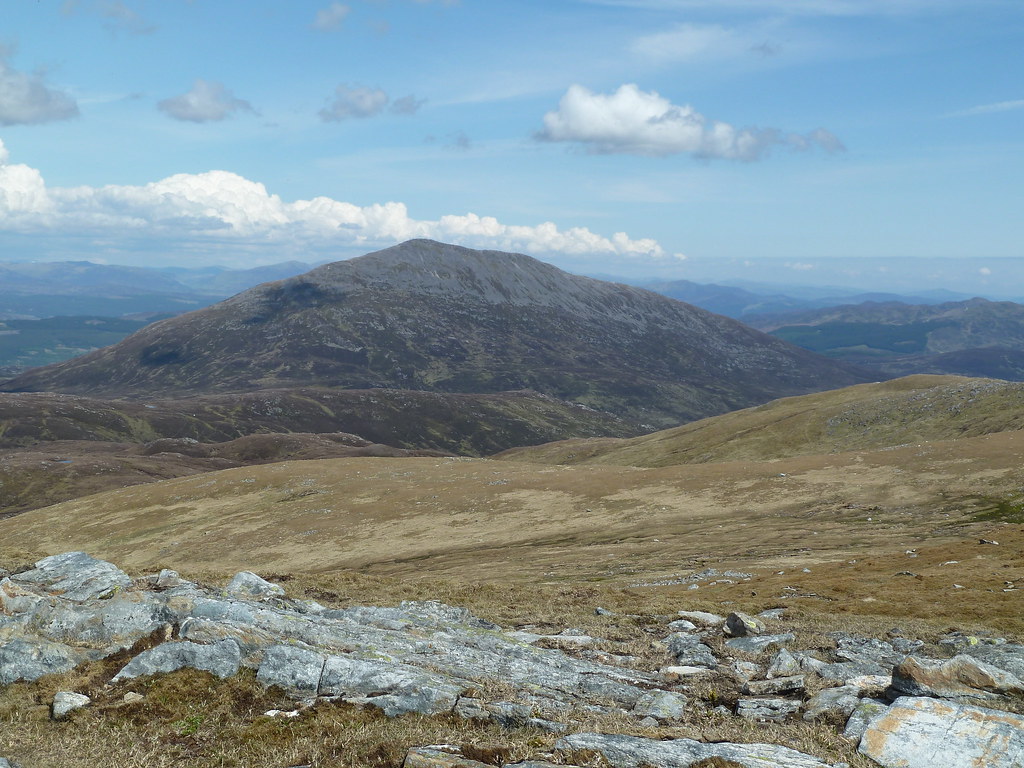 Schiehallion from Meall a' Bharr

At first I thought I'd reached my third Munro of the day, but on checking the map I realised I was being a bit premature, and number three was still some distance away. 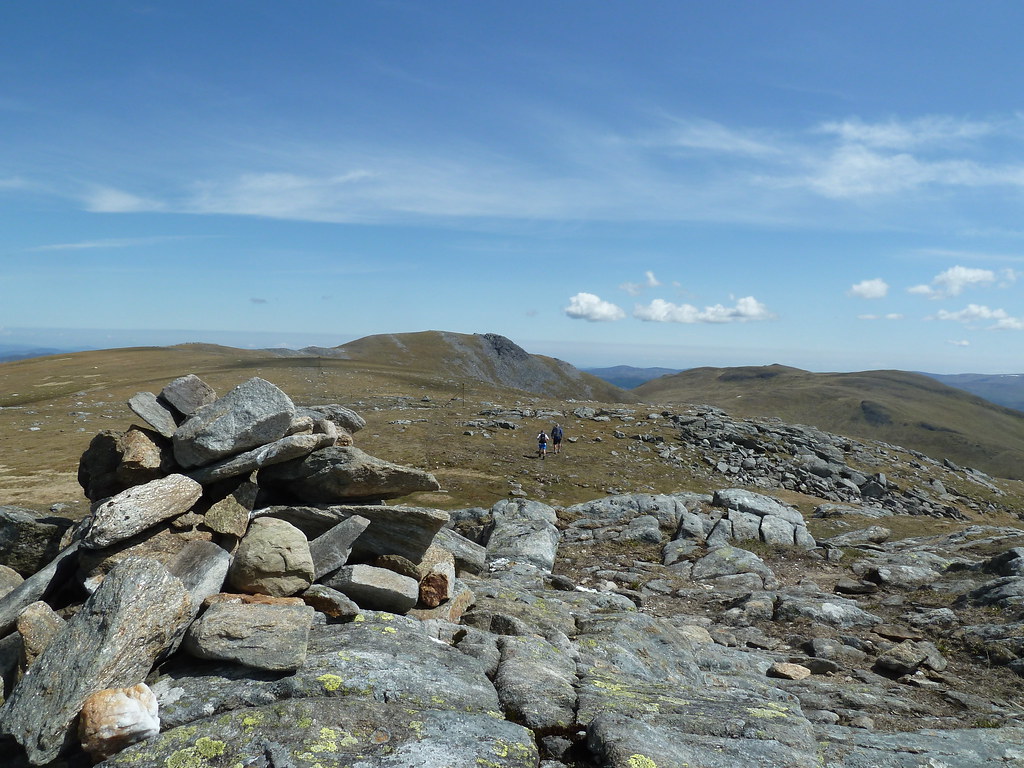 From Meall a' Bharr the going is flat and pleasant, the path following the line of fence posts across lovely short grass until the boulders begin to reassert themselves, at which point it veers off to the right to climb the flanks of Carn Mairg. The summit is a mess of boulders and crags, with the summit cairn off to the left...easily missed in poor visibility I would imagine. 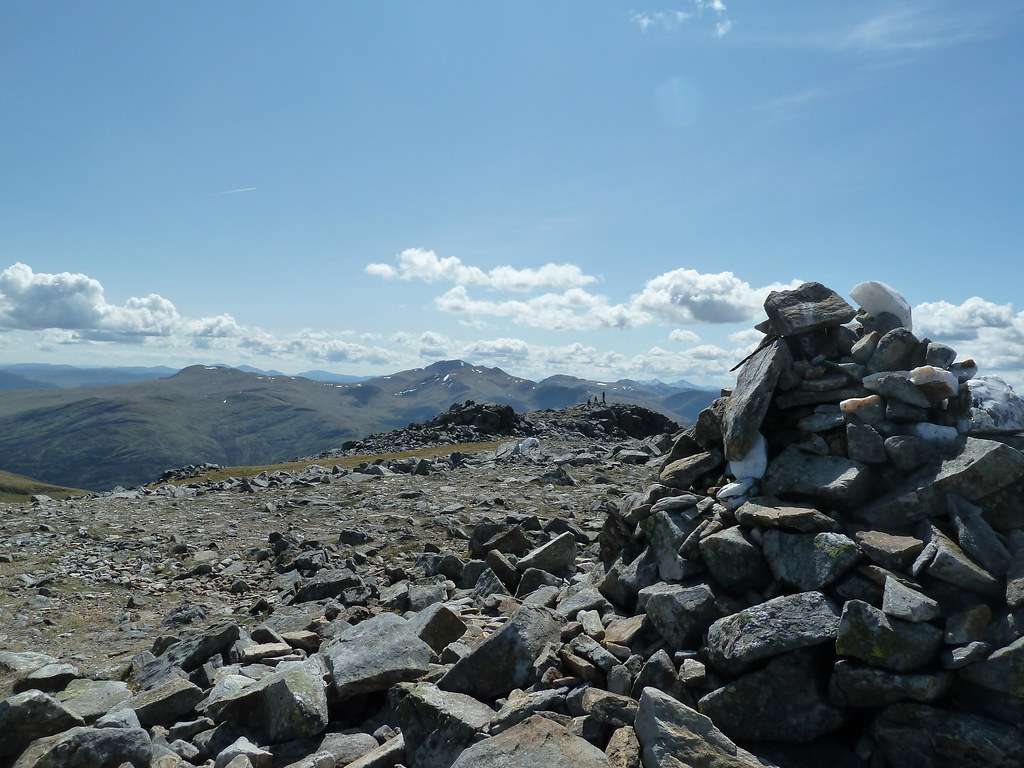 It had taken just under two hours from Meall Garbh to Carn Mairg...I suppose the runner who passed me on the way did the whole round in about that time...bloody show-off! The final climb of the day looks very straightforward from here, and indeed it is once you negotiate the boulders on the initial descent of Carn Mairg. 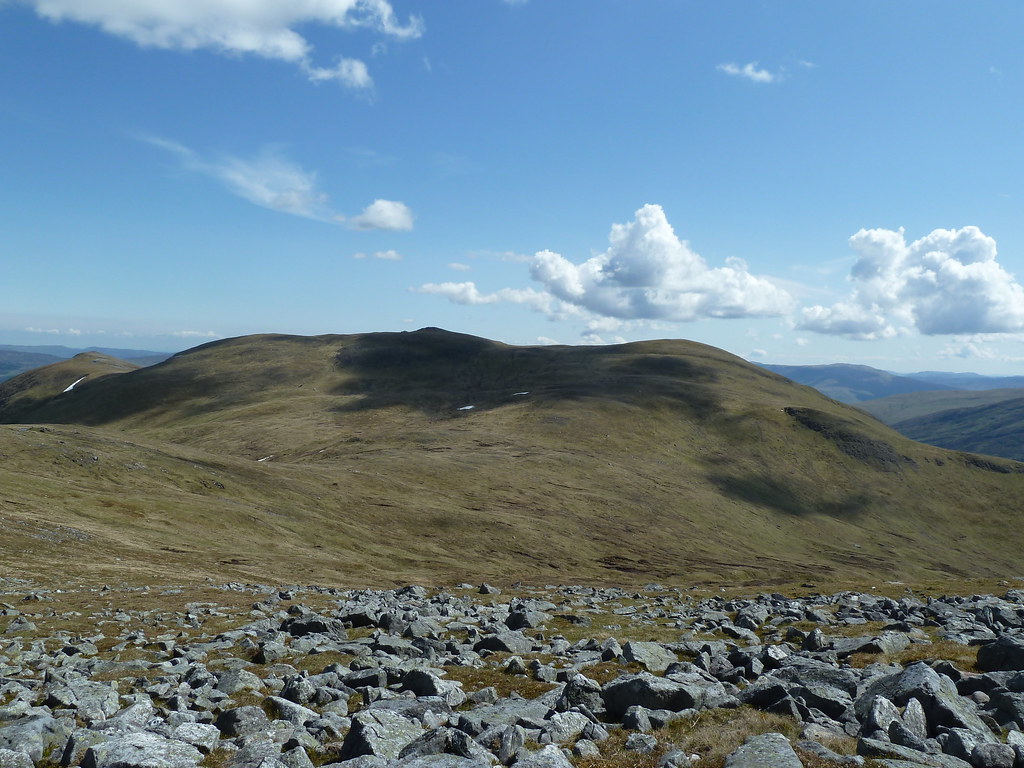 Once on the flatter ground the going is very easy and even at the end of a long day, the final climb to Meall na Aighean isn't at all taxing. Once on the summit ridge, turn left and the summit is a short clamber over some more boulders. It took about an hour for this stage...including a fifteen minute snack break. 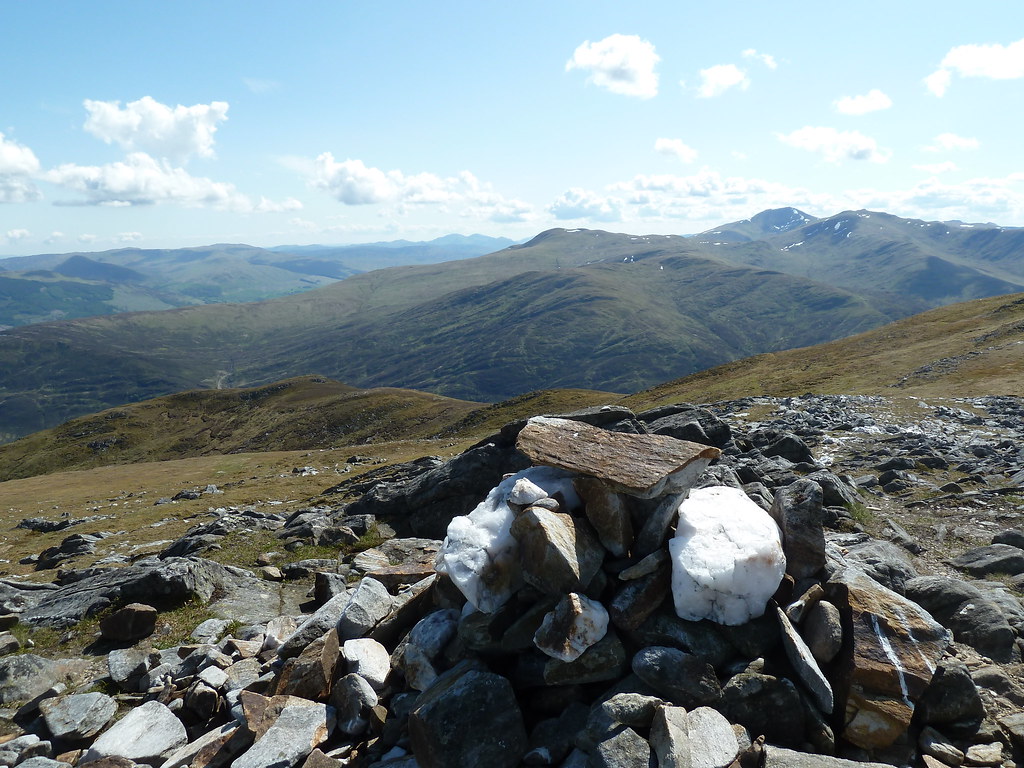 After taking in the views it was time to head back to the car, and at this point my navigation let me down again. What I should have done was retrace my steps back towards Carn Mairg for a short while before picking up the west ridge of Meall na Aighean, but instead I just headed straight for its western top, skirted round that and found myself heading south towards some crags. A quick check of the map soon made me realise my error, but rather than retrace my steps I decided to just head off in the general direction of the ridge, picking my way across some moderately rough ground until I picked up the proper descent path. My detour did give me some nice views down Glen Lyon though... 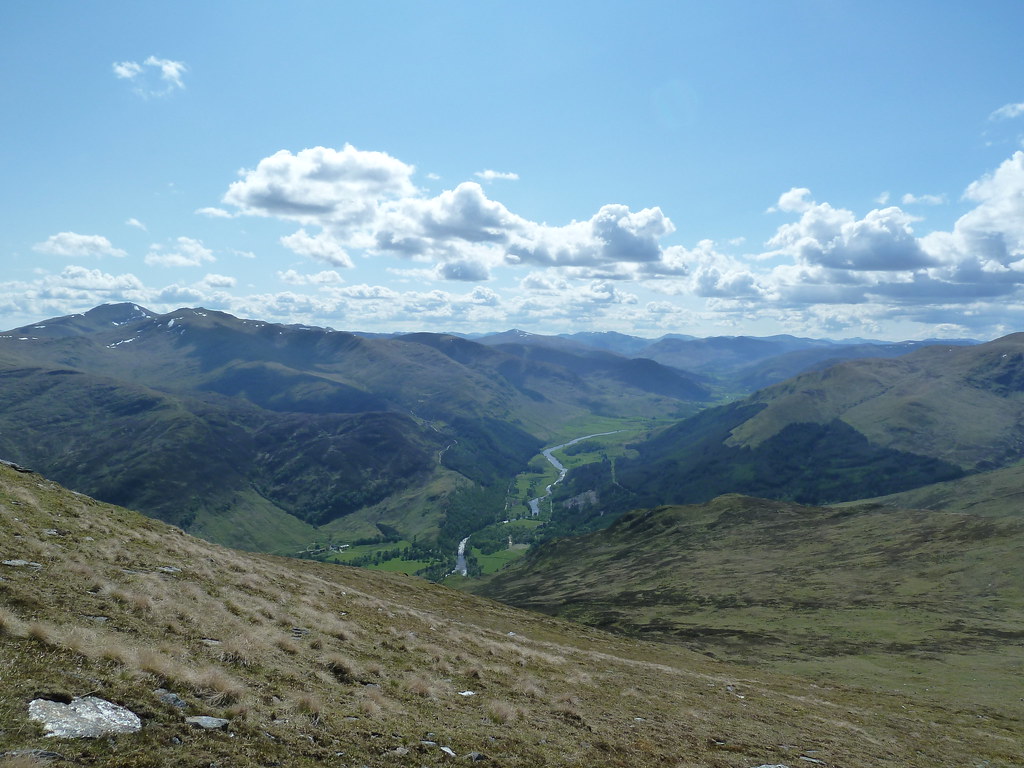 As the path descends, various other paths converge, so careful navigation is required...luckily I decided to concentrate and made it back to Invervar without further incident...about an hour and a half from the final summit to the car.

So an eight hour day...could probably have done it in seven if I'd been paying a bit more attention. The hills themselves aren't any great shakes, and the paths between them aren't going to set anyone's heart racing, but it was a nice walk (the weather helped obviously) and there were plenty of good views to be had. And I've got my first foursome in the bag!

A nice report. I'd done the first two in the horseshoe a couple of years ago and so did Cairn Mairg and Meall na Aighean on Monday. I made the same mistake coming off the lower top on Creag Mhor and had to backtrack to the ridge coming down. Super views in perfect weather!

I did this about a year ago in similar conditions - it's a lovely walk isn't it!

At the time there were Hydro works all over the place and they sent me round the other way round, was nice coming down the burn at the end though.

Lovely photo, and congrats on the foursome

Thanks jaco - glad it's not just me that's goes wrong! I should probably just have backtracked myself.

Jaxter - thanks yes it's a nice part of the world and if you've got a clear day the views are fab.