PART 1 23rd May
My second visit to the Highlands (in August in the late 50's) was with the school mountaineering club. We were dropped at Glenfinnan and walked through to Glen Shiel in stages. The weather was dire, the midges and mosquitos horrendous, and because I was not yet immune to the bacteria in "mountain" water I was eventually sick as a dog - but aged 17 you accept all these things without complaint

We did however have one brilliant day.

In those days the main road headed up Glen Garry, turned R at Tomdoun, to go through what is now Loch Loyne and climbd over the eastern end of the South Glen Shiel ridge to reach Cluanie. We were dropped at the high point (435m) almost halfway up up Craig Mhaim, and walked the whole length of the ridge, so when - much later - I started "collecting" Munros I cheerfully ticked off the full 7.
Now coming close to completing them, I took a closer look at the map: I remember that at the end we headed N down an easy angled ridge - almost certinly the Druim a Choire Reidh - and camped by the river at a point where it ran S of the road. This meant I hadn't done Creag nan Damh - a failing that had to be remedied. I had hoped to include a "cheap" Corbett, but Sgurr a Bhac Chaolis has now been down graded to a nothing

Reading about deer fence problems starting from the "battle" car park ( Jaywizz and Boots and Paddles) I decided we would start further down and follow the path to the Bealach Duibh Leac.
I had eaten something that disagreed with me the previous night and felt dreadful: I would have gone back to bed had we not come all the way to do this hill, but deciding that I would either Improve or get worse, we set off in rather dull weather and "crawled" our way up the bealach. I felt a bit better and we pushed on to the top in a total of four hours. I didn't take many photos: 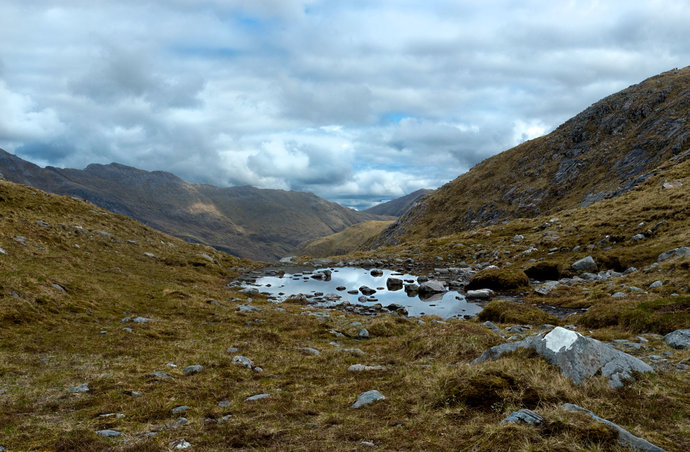 A small lochan just below the bealach Creag nan Damh from the bealach Looking E along the ridge from the top Down towards Loch Duich
As the summit is right at the East end of the hill I thought we would descend to the "battle" car park - deer fences or no - and walk back down the road. Descending the Fraoch Coire there is a faint path keeping well to the R and you then cross under this impressive waterfall to reach a good stalkers track. The track leads easily down and enters a wood via a hole in the fence. We thrashed about here for a bit but eventually got out lower down (almost all the fencing round the wood is rotten) and crawled under the armco.to reach the road in 2 hours

Part 2 24th May
Sometime in the '70's We parked at the head of Glen Nevis, walked through the gorge and climbed the endless grassy slopes to Aonach Beag. We descended to the 842m bealach at the head of Choire Guibsachan climbed steeply to Carn Mor Dearg, went along the arete to the Ben and returned to the car via the "waterslide". We were pretty fit, but did we include Aonach Mor? I wasn't sure so it looked like another "Lurker" that needed seeing to.
Aonach Mor is very straightforward. From the top of Nevis Range Gondola, we headed R to the chairlift, climbed easily to its top and followed two drag lifts to the plateau. The weather was much as the previous day and there was a bitterly cold wind, but an unlocked controller's hut near the top provided a wam shelter

I was really pleased to see how much of the hillside Nevis range have kept pristine. I guess the planning constraints were very tight, but when you see the ghastly mess that alpine ski slopes become in Summer there is no comparison.
We pushed on to the top in just over 1.5 hours. The original plan had been to continue over Aonach Beag to a couple of "tops" that I haven't done, but the weather being mediocre and having a big walk planned for the next day, we decided enough was enough: we descended slightly further West directly to the foot of the chair (1 hour) Edge of the plateu N of the summit Carn Mor Dearg and the arete 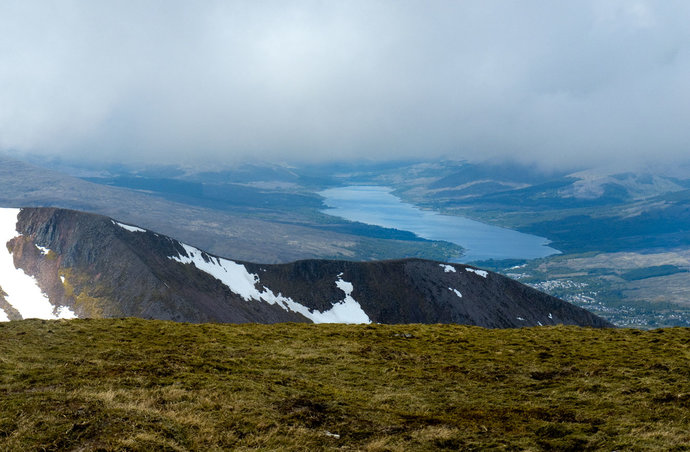 From further down - the Ben is nearly out of the cloud