Yesterday was Moss' first hillwalk without her mentor Millie, who was laid up with a sore paw. Was almost tempted to go for Ben Lomond again, but decided to go for a new hill - Ben Ledi. We found a spot to park and set off, only for me to realise I hadn't picked up the lead so back down we went where I found I'd left the lead at home! Fortunately there is a spare lead in the car, far from the best lead but it would do if needed so lead in my pocket we set off again. 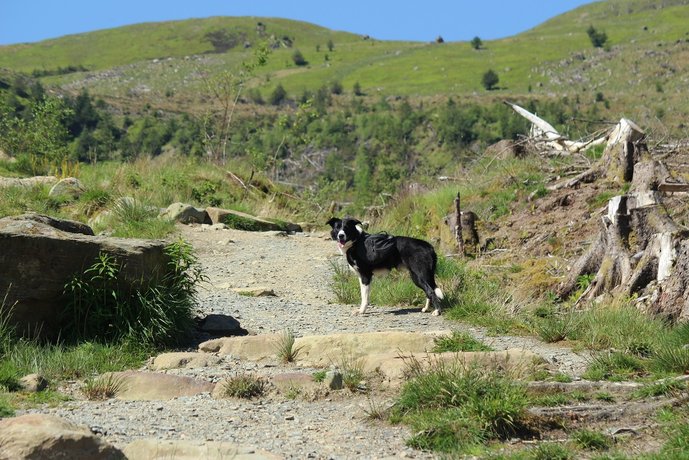 The first part of the walk is through an area that has been felled, so not the most attractive views but then we reached the younger woodland that had been replanted further up and that was much nicer walking through - or it would be if it wasn't for the heat! Heading up the steps, I seriously considered giving up and heading back down. I don't do well when it's hot but that little breath of wind kept me going, along with several stops in the shade to cool down a bit. Progress on the first stretch was slow until we crossed the stile and started following the path up to the shoulder where there was a bit more of a breeze and coupled with a few clouds drifting over occasionally to block the sun a bit, it became a bit easier. Moss had a much simpler solution for the heat, lying down in the bog to soak her belly...and yes, I did feel tempted to try it myself! We reached the shoulder and followed the obvious path along it. Moss was put on the lead for this bit as I'd seen a few sheep just over the edge on the way up though I couldn't see them. On meeting another walker, I asked if he'd seen any sheep and he said he hadn't so she was let off again, though I didn't let her go too far ahead just in case!

The views across to the Arrochar Alps were amazing, though initially I was too busy watching where my feet were going to notice! We neared the summit, but there was a group of people at the summit marker with dogs that were barking at Moss with their hackles up so we stopped for lunch away and out of sight of them. There were a pair of ravens hanging around the summit, I always like seeing the ravens, so I spent some time watching them too. By the time I'd finished my snack, the other group had gone so we went across to the summit marker and another walker was kind enough to take our photo. It was the time to start heading back down, we just went back the same way. Moss was left rucksack free so she could have a run about and burn off some more energy. I think she appreciated the views too... So that's the views I missed the other day, nice. Ta for posting, a nice wee stroll, but hot in this weather. Looks like a very popular hill especially at the weekend.

More great photos of Moss to add to the collection.

I climbed Ben Ledi on Monday with similar weather, it certainly was a hot and sticky climb but worth it for the fantastic views.