May Magic on Beinn Dearg

May Magic on Beinn Dearg


Second day of my Ullapool trip and as I drove to Inverlael the sky was overcast and the cloud-base down to about 700 metres. I'd been looking forward to this walk into an intriguing group of wild hills, so I was somewhat disappointed that the weather seemed to be ignoring the good forecast

However, it was early in the day and I began the long walk up Gleann na Sguaib with the hopeful feeling that things would improve.

From the car park a gate opens onto a vehicle track. At the waterworks a sign confirms that you're on track for Beinn Dearg. Another sign points the way at a bifurcation just before the bridge, then another where the path for Seana Braigh branches off. Eventually a small hydroelectric dam appears through the trees and you come to a gate which marks the end of the forestry plantations and the beginning of open country. A bike would be useful up to this point. Out of the woods - the path heading up Gleann na Sguaib

The low cloud persisted for some time, but I was heartened by the call of the cuckoo from the birches on the craggy hillside on the right. It's a looong way up the valley, and eventually the top of a mighty crag peeped out of the mist to herald the breaking up of the cloudy ceiling.

Gradually, only wreaths of white mist were left trailing across the glistening cliffs, and the full grandeur of Beinn Dearg was revealed. I was spellbound. Mist clearing from the cliffs of Beinn Dearg

It promised to be an enchanting day of mountain magic. Lochan Lathail below the bealach

This was no time to be rushing about; it was a time to stand and stare, frequently; to savour the late spring light on rock and turf and water; to breathe in deeply the pure mountain air. I was in no hurry. I wouldn't be breaking any records. This was the tenor of the day. The mighty cliffs of Beinn Dearg Nearly at the bealach, looking back down Coire Mathair Lathail At the Bealach an Lochain Uaine looking to Meall nan Ceapraichean

Reaching the bealach on this walk is a significant moment, being the focal point. It's a place of great atmosphere and interest with its scattering of outcrops and lochans. Ptarmigan at the bealach, south ridge of Cona' Mheall behind Seana Braigh from the summit of Beinn Dearg I spent a long time on the summit of Beinn Dearg. It was a wonderful place to be. Beinn Dearg from the slopes of Cona' Mheall The first human I met was a runner. She was on her way up Cona' Mheall as I was coming down it. A brief 'hello' dissolved in the breeze.

She overtook me just before the summit of Meall nan Ceapraichean, where she stopped for a brief drink and then off again. I had no intention of trying to keep up. Eididh nan Clach Geala from the descent off Ceann Garbh

The descent of the Ceann Garbh slope of Meall nan Ceapraichean has only a sketchy path and could be tricky to navigate in poor visibility. I spent a long time on the summit of Eididh nan Clach Geala. It was a wonderful place to be. 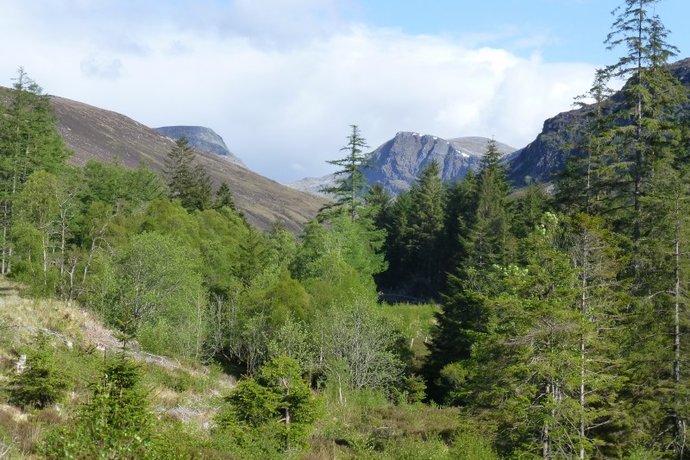 This marvellous walk had brought back to me something of the wonder and excitement I had felt when I first discovered the hills. It had cast a powerful spell. If I'd done nothing more this trip, I'd have been well satisfied.

Re: May Magic on Beinn Dearg

Looks like you had a cracking day. There are some really nice atmospheric images here, that do whet the appetite. I don't much like long approaches, but I imagine the views on this one make it more than tolerable!

I recall looking at the weather reports on this date and hoping desperately that it would hold out another week for our Skye trip (which it did, of course!).

Re: May Magic on Beinn Dearg

Thanks Alteknacker.
I'm not overly keen on long approaches either; but this one is all part of the experience as the scenery gets more and more impressive as you progress.

The weather has been pretty amazing for the last few weeks hasn't it? - Glad it held out for your Skye trip. I'll be back up to the Loch Carron area in mid June so I'm hoping it holds out for that too!