Ring of Steall is required after choir curry night...

Ring of Steall is required after choir curry night...


Singing in a large choir has its perks, one of which is that a select group of us from the second-back row of the Bass Section get together for a regular end-of-term Curry Night after each concert

. Now, several of us are also keen hillwalkers, and given the current run of good weather, we'd planned to use the get-together as an opportunity to organize a wee walk. Initially we'd hoped to get a group of four together, but due to clashing work commitments Malcolm couldn't make it

(another time, hopefully!) so it would just be Tom, Donald and myself. Various possible targets were discussed over the Chicken Chaat, including Sgurr an Coireachain and Sgurr Thuilm at Glenfinnan, which were looking like strong contenders for a while

... However, by the time we had all tucked into an extremely fine but undeniably nippy Lamb Achari, it was obvious that a Ring of Steall was going to be required

.
I will just take this opportunity to make a shameless 'plug' for the choir: we are actively recruiting altos, tenors or basses, and of course we are always keen to sell tickets for our concerts

. For details, see www.bearsdenchoir.co.uk .
Anyway, Tom kindly offered to drive and we got a good early start, meaning that we were parked at the Polldubh Falls car park in Glen Nevis and off walking shortly before 9 a.m. After further hot debate, we had settled on an anticlockwise round, in other words the opposite way round from the website's Route Description. The main reason for this was that we noticed a substantial number of WRs on the website had mentioned that the steep descent from Sgurr a'Mhaim at the end of a long day if doing the round clockwise can be fairly pestilential (I was particularly struck by poor Laconic Surf's comment that if someone had handed him a gun at that point, he'd gladly have shot himself) ... so we didn't fancy doing that so much

. Widdershins it was, then, hence the start from the Polldubh car park rather than the bigger one at the very end of the Glen Nevis public road.

our_route.gpx Open full screen  NB: Walkhighlands is not responsible for the accuracy of gpx files in users posts
The sun was shining, and we set off in good spirits up the Coire a'Mhusgain path. 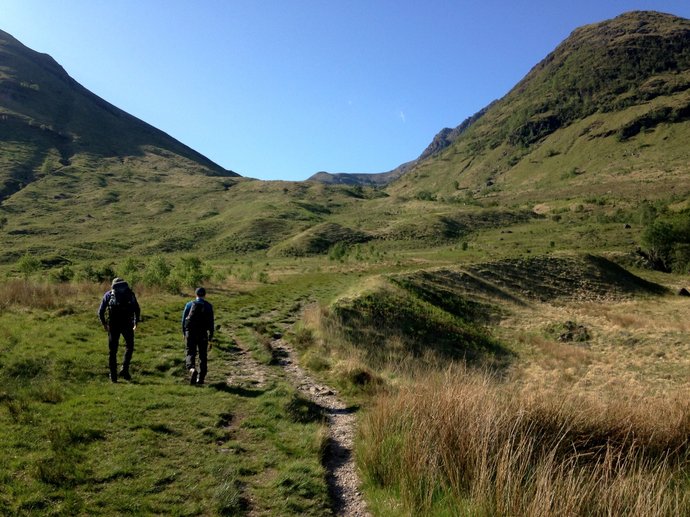 Before long, we took the initially faint side path on the left that ascends steeply up the NW ridge of Sgurr a'Mhaim. At first it wasn't too bad, but it is steep all right, and after a while the zigzags just seem to go on for ever. By way of consolation, there were some grand views of the Ben on the other side of Glen Nevis: By way of a change, the next bit consisted of ... more steep path and even more zigzags. I was beginning to understand why this hill got itself dubbed 'Scar and Maim' by one cheery soul on the website

! To add to the fun, just as the gradient eases a little around the 800 metre mark, the terrain underfoot changes to shattered quartzite scree, meaning that it is a case of two-steps-forward, one-step-back. 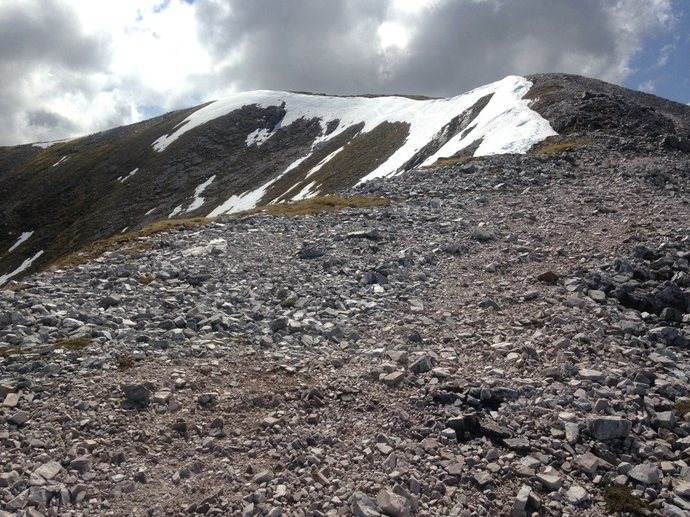 Personally speaking, I'm relieved to have tackled this on ascent rather than on descent

. In any case, Sgurr a'Mhaim summit was reached with some relief. This is the second-highest of the Mamores and a cracking viewpoint: just as well that the views justify the effort of getting up the thing

! Tom took this shot of me with Stob Ban and Mullach nan Coirean in the background: just as when actually climbing these two hills, there's a striking contrast between the red rock of the Mullach and the white quartzite on Stob Ban. Next up was the scarily named Devil's Ridge

. Given its name, I'd been rather worried about this in advance and I was expecting something Aonach Eagach-like. The reality, however, isn't nearly so scary. Although the ridge is certainly dramatic and enjoyable, it actually has a very good path right along the top, and only a couple of short sections of fairly mild scrambling. Here's a shot of it as seen from Sgurr a'Mhaim, with Bidean nam Bian in the background: To my surprise, we made fairly short work of the Devil. Ever the keen gardener, Donald even paused halfway along to speculate on whether the eroded path might be suitable for some hydrangeas... 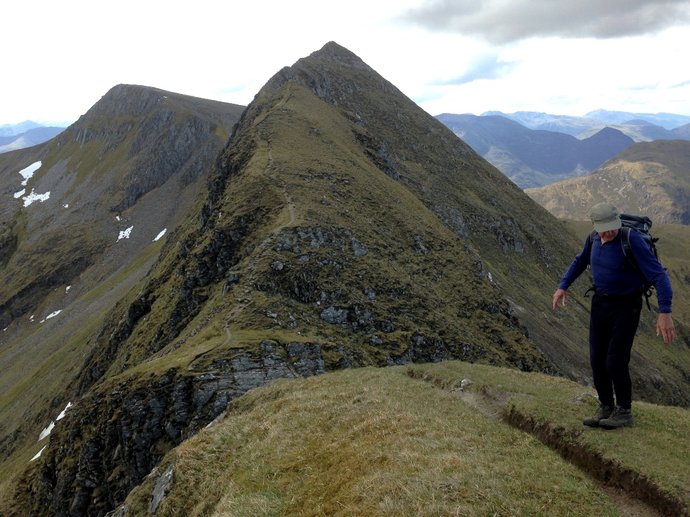 The next peak up was Sgorr an Iubhair, the Demoted One. Perhaps unsurprisingly, while the rest of the Mamores basked in the sunlight, it seemed to be in a massive sulk, presumably polishing its red light-sabre and plotting world domination... When we got up it, we were relieved to see that the poor thing has at least been allowed to retain its summit cairn. There was a nice view from here of our next target, Am Bodach. And to the south, Bidean nam Bian was looking great again, still holding a lot of snow in its northern corries. Munro Number Two, Am Bodach, turned out to be another fantastic viewpoint, with particularly fine coastal views down Loch Leven. There was also a pleasing vista from its smaller SE cairn towards the Blackwater Reservoir, with the shapely cone of Schiehallion visible in the distance. We had two more Munros to climb, however, and the next section was quite a challenge: the steep descent from Am Bodach to the bealach with Stob Coire a'Chairn (which is the low point of the entire round). There was quite a bit of loose rock on the descent path, and I found this bit quite tricky, although Tom and Donald still seemed to be in grand spirits as they plunged into the abyss: Stob Coire a'Chairn was next up. However, there was a temporary obstacle in the way: an intervening hump of just over 900 metres that (surprisingly) barely figures on the OS Landranger map, but which is much more clearly marked on the Harvey British Mountain Map. The Harvey map shows its traverse as requiring approximately 75 metres of ascent and descent, meaning of course that it qualifies as a member of the hill category known as a Confounded £$*&$ing Nuisance

... I can think of a few other minor humps that I'd nominate in this category, such as Meall nan Tri Tighearnan on the traverse of Ben Stavros and pals - I'm sure other walkhighlanders will be able to nominate their own contenders!
Anyway, we agreed to stop for lunch at the top of the Nuisance, accompanied by a very welcome swig of whisky from Donald's hip flask (not for poor Tom though, since he was our Designated Driver

). We then set off revigorated for Stob Coire a'Chairn, and soon enough we were at the summit, enjoying an impressive but mildly intimidating view of our next target, An Gearanach, and its steep and scrambly south Top known as An Garbhanach. Somewhat to my surprise, An Garbhanach proved to be both more challenging and decidedly more fun than the better-publicised Devil's Ridge, with an exhilarating sense of exposure higher up, and some very entertaining scrambling along the top of the ridge on the way to An Gearanach. In contrast to the rocky Top of An Garbhanach, An Gearanach itself is a steep grassy peak with a very pleasing symmetry to it: 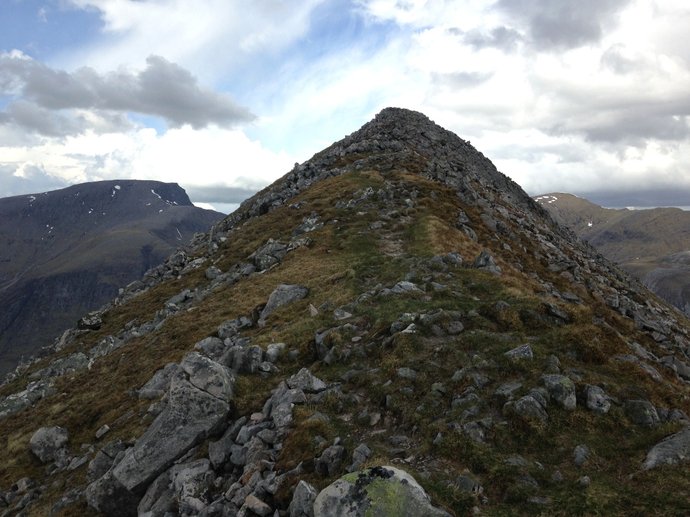 In what seemed like no time, we were on the grand summit eyrie of Munro Number Four, enjoying spectacular views of Ben Nevis and the Carn Mor Dearg arete to the north. In retrospect, we were all in agreement that this was our favourite hill of the four, and it was a good one to finish on But now we had to get back down again! Fortunately, the descent north from An Gearanach is on an initially excellent stalkers' path, and it made for fairly easy going on the whole. The bright sunshine so far had lulled us into a false sense of security, however. This is Scotland after all: Ne'er Cast a Cloot til May is Oot, as my granny often remarked, and at this point it started to rain

. Cloots (well, waterproofs anyway) were dully donned, and we continued with what remained a fairly enjoyable descent, with good views of the strange rock formations on Sgurr a'Bhuic, a southern Top of the Aonachs across the glen. The sun soon started to break through again, and there were continuous fine views all the way down to the Water of Nevis away below us. The last wee bit of the descent path was tiresomely eroded, and there was even a short section that had been carried away completely by a landslip, necessitating a short bypass down heathery slopes on the left. This didn't go on for very long, however, and soon enough we were down in Glen Nevis, with the awesome sight of Steall Falls before us. 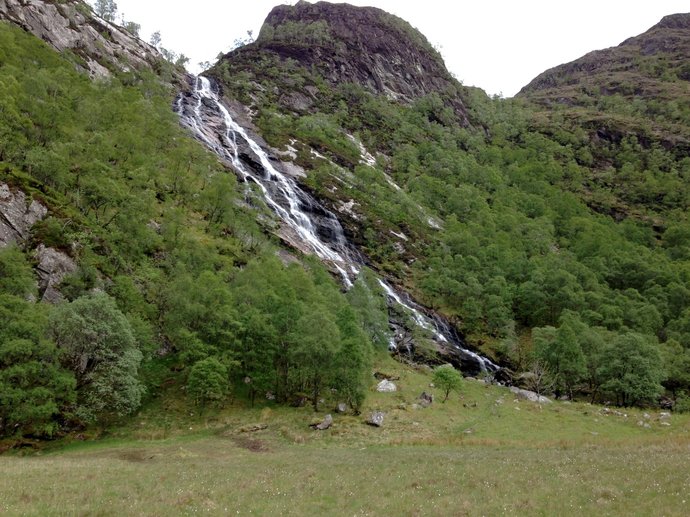 The burn has to be crossed on big boulders right at the foot of the Falls: here is Donald in action. 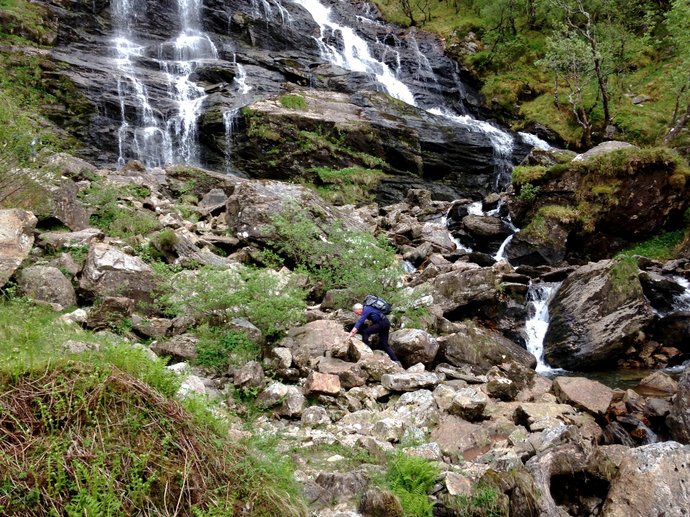 Next up is the famous Wire Bridge at Steall Hut, which Tom practically ran across so that he'd have a chance to take entertaining photos of us from the far side

. Now, I had decided at the outset that this wasn't for me and that I'd just be sensible and paddle the river instead

. However, when I actually saw the thing, it didn't look quite as bad as I'd expected, so I decided to give it a go after all. Donald looked on in mild amusement, while I crossed with balletic grace (not!). Donald then followed, with rather more style. All that remained was the short walk through the extremely scenic Nevis Gorge, followed by a quick stoat downhill back down the road from the main Gorge car park to the Polldubh Falls car park. We were a bit behind schedule by this point, meaning that inevitably it became something of a Forced March, and I didn't have much time to attempt photos of the gorge. I did get this quick one taken, however: An absolutely cracking day's walking, this. Many thanks to my fellow choristers for the company

Re: Ring of Steall is required after choir curry night...

I did the Ring clockwise on Monday. I got better weather as my burnt head will testify

As you mentioned, there's a lot more ascent than OS maps show

Re: Ring of Steall is required after choir curry night...

RTC wrote:Brilliant title. - In the "Carry on....." tradition.
Nice report and photos as well.
Speaking of curries, have you ever tried a Tarka dahl. - Its just like an ordinary dahl but a bit 'otter. [I've been waiting years for a chance to use this joke.]

! I will probably nick that one sometime...