I decided to climb these two Marilyns to break my journey on a trip north.

The recent fine weather continued and I enjoyed clear blue skies and warm sunshine on the drive north. Parked at the double passing place on the road to Ardochy and set off at the patriotic time of 13.14!

The hill sits right above the road and didn't look too challenging. I was able to get through a kissing gate on the deer fence a little way down the road. I'm pretty thin, but I almost had to take my rucksack off the get through! After that, it was just a case of heading uphill. Not the most enjoyable hill I have ever climbed - quite steep and lots of heather, so although the ascent was short, it was a bit of a slog. Once past the steep section, it is a better walk to the cairn. Beinn a'Bhacaidh from the cairn

After a look at the view, I made my way down. I chose a line towards Killiechoilum until I was past the steeper ground, then headed back towards the gate. In the unlikely event that I come back to this hill, this would be my route of ascent. Meall an Tarsaid from the car

A short drive over to the large layby at the viewpoint on the B862 road for the second hill of the day.

I followed the well constructed path to Carn an t-Suidhe which gave an easy start to the walk. From there, I dropped over the moor to the deer fence around the now felled forrest. Rather than crossing the fence, I followed it round to the base of the hill - although a wee bit longer, this saves climbing the fence twice!

On the hill itself, it is easy to pick up animal tracks leading in the right direction, skirting just to the north of the 512 metre spot height. On the wau up, three deer obligingly positioned themselves on a knoll. An easy walk to the ridge, past the lochan to the cairn. ML assessors could have a lot of fun putting candidates through their paces on this knobbly ground!

A wonderful panorama at the top, especially considering the minimal effort to get there. 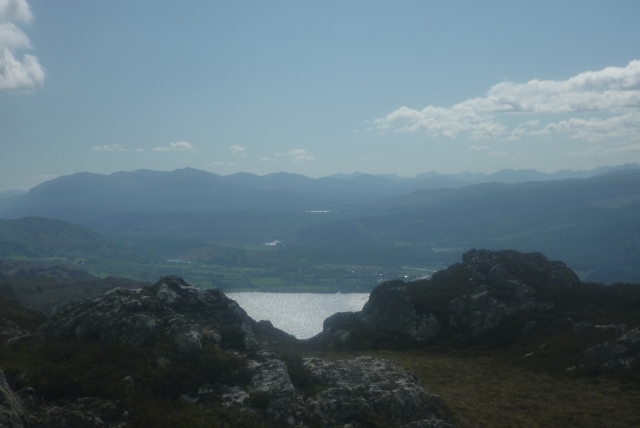 Looking south west from the summit Although there were lots of cars at the viewpoint, no one else ventured beyond the path, so I was able to enjoy the hill to myself. Headed back to the car by the route of the ascent. Looking back at Beinn a'Bhacaidh from the path

An enjoyable afternoon on undemanding hills, although I definitely preferred the latter!