A short notice day out to make the most of the dry spell, before the weather changes, as it no doubt will

No Munro's on the agenda until Knoydart, so I looked to see where I could head off to. I didn't fancy driving too far and a couple of Donalds were attracting my attention as the most northerly ones still to be visited. Decision made, a bit of research and a couple of routes downloaded I advertised the fact that I was heading out and Hugh popped up out of the woodwork and wanted a half day in the hills and these 2 kind of fitted the bill.
We arranged to meet at the Park & Ride near the Forth Road Bridge at 7.45am, the forecast was to be overcast with the sun appearing about midday so the plan was complete.
I was early yet again and arrived to find Hugh was extracting his gear from his 'tidy' car

Gear dumped in the boot and off we went, following my satnav

I managed to get the satnav co-ordinates for Glen Artney Church from the tinternet where the car park is and input them into the satnav. I was a bit dubious about the co-ordinates and my concern was vindicated later in the journey, so Hugh took over navigational duties. We planned to join the M9 before Linlithgow and head towards Stirling, however that plan was scuppered as the slip road was closed

A quick about turn and we headed west through Linlithgow and we arrived at Glen Artney shortly after 8.30 and were met by the local population of midges who were looking for their breakfast. We weren't keen to be on the menu so it was a quick kitting up and off we went.
When we set off we decided against taking/putting on sun cream as it was overcast and the forecast was for the sun to appear at about midday 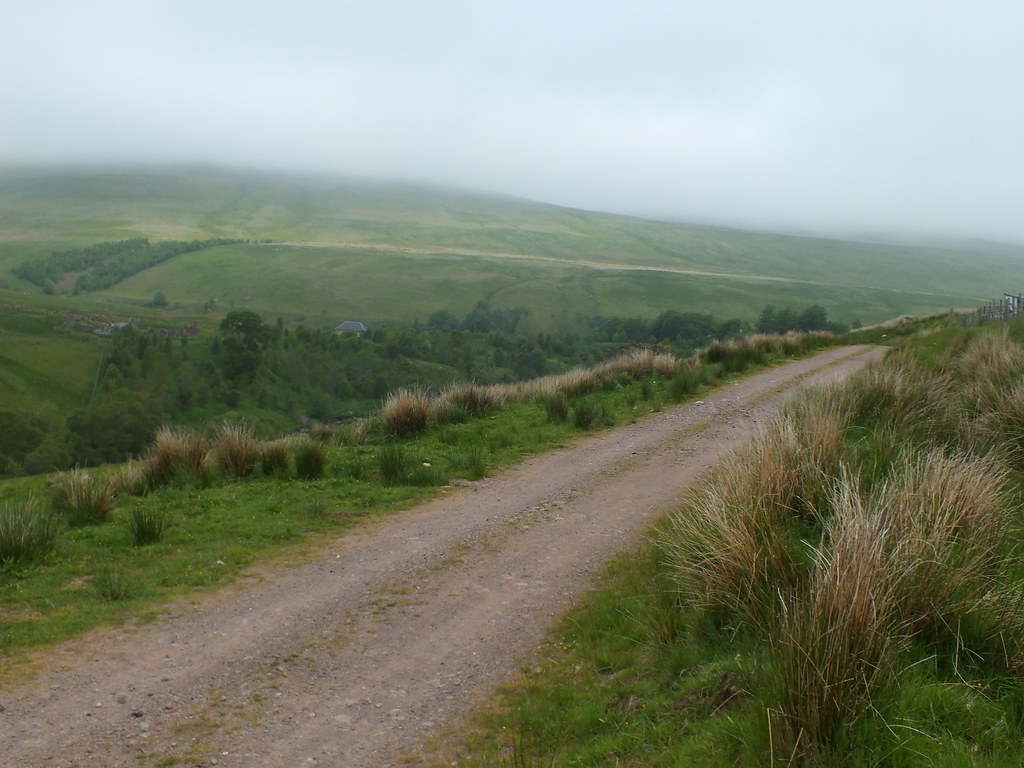 Set off on a good track, note the low cloud 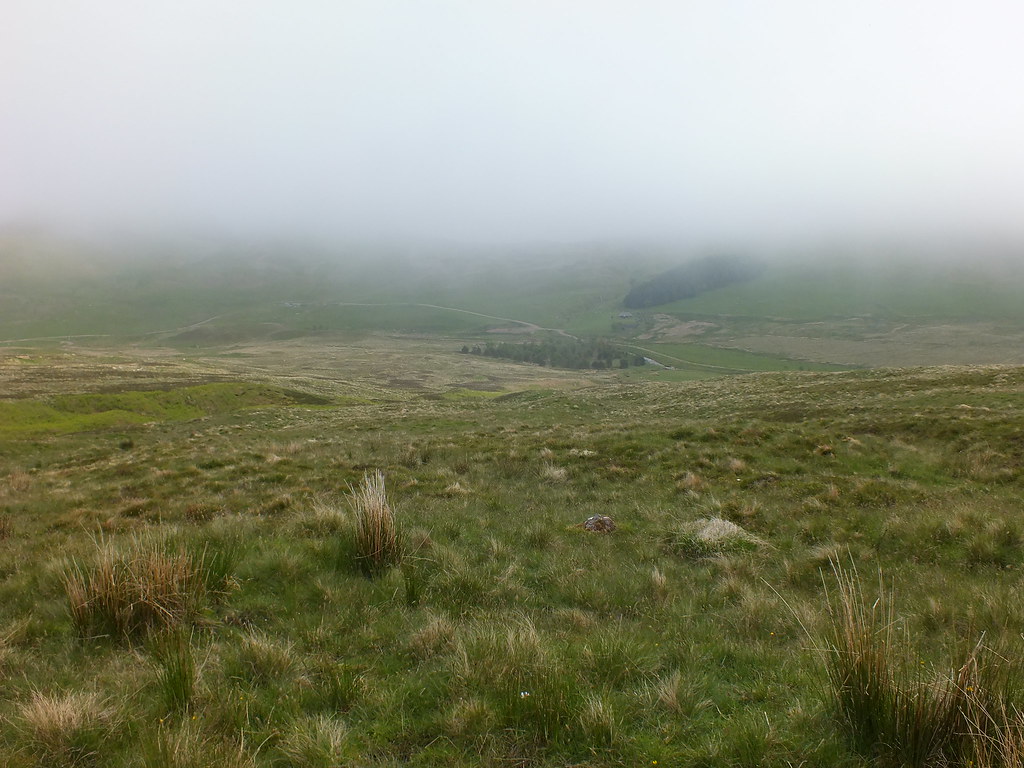 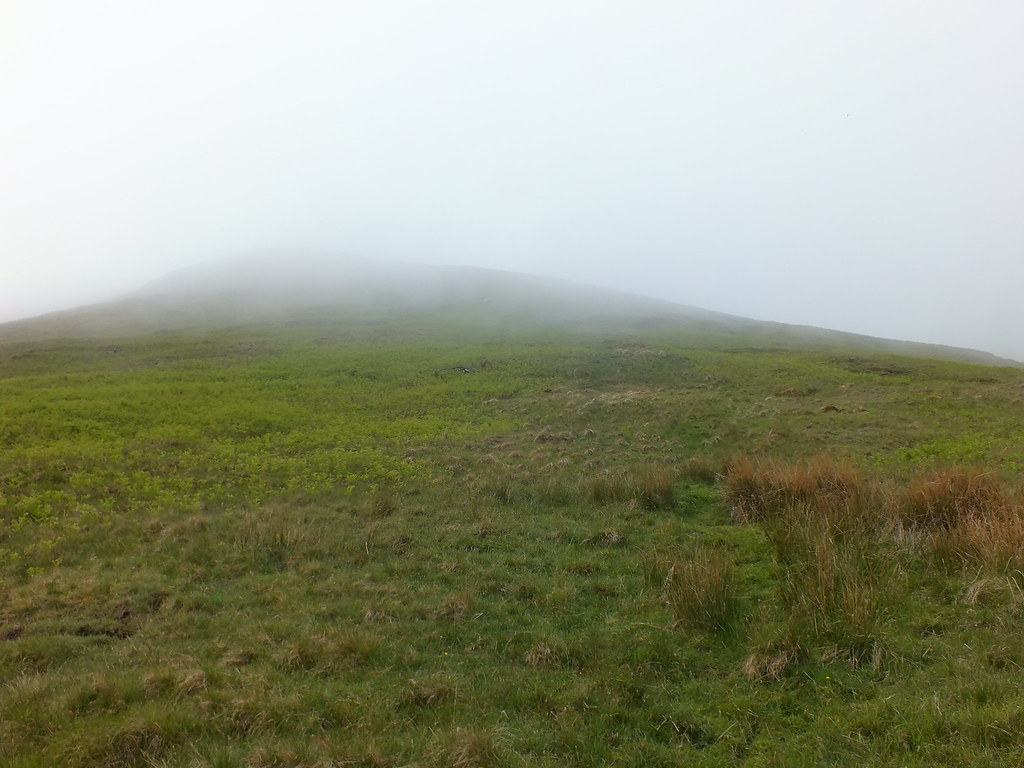 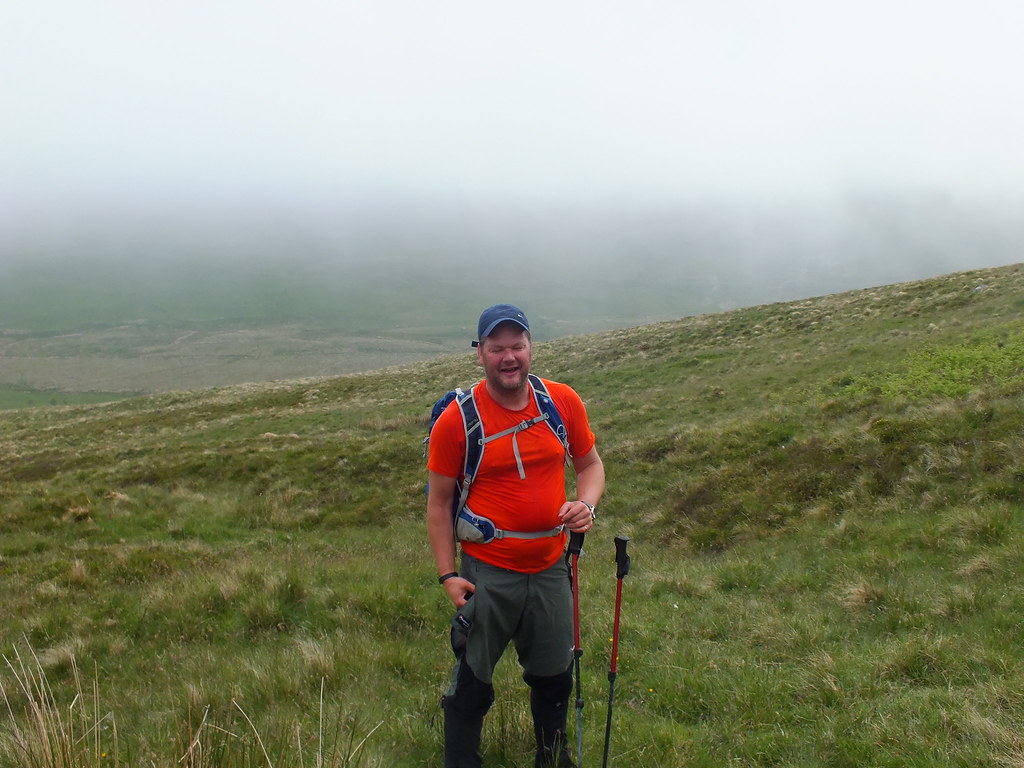 A brief pose on the ascent

We were following a couple of WH user routes (loosely), initially we headed south on a really good track, after about 2km we left the track and followed a burn uphill, there was an intermittent path which eventually petered out so we just headed uphill. The going was tough on soft dry spongy grass and as we neared the top of the horizon, we appeared out of the cloud. Now it was time to stop and take quite a few photo's, this was Hugh's first 'inversion' experience and we had to be quite quick as the sun was quickly burning it's way through the thin layer of cloud 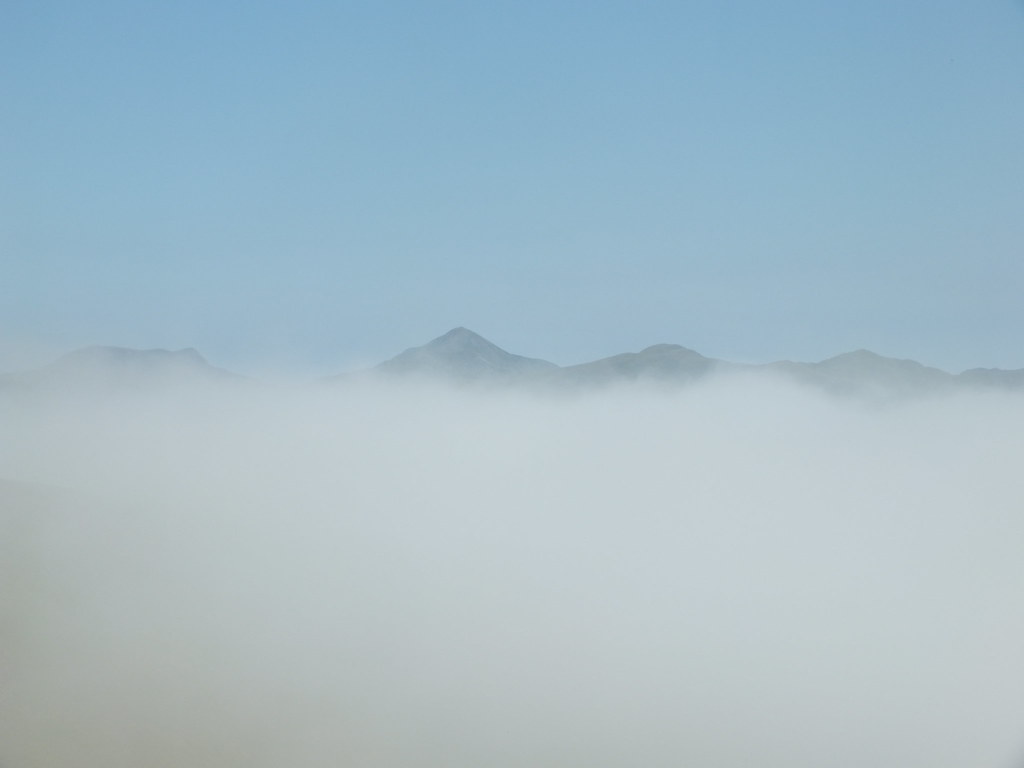 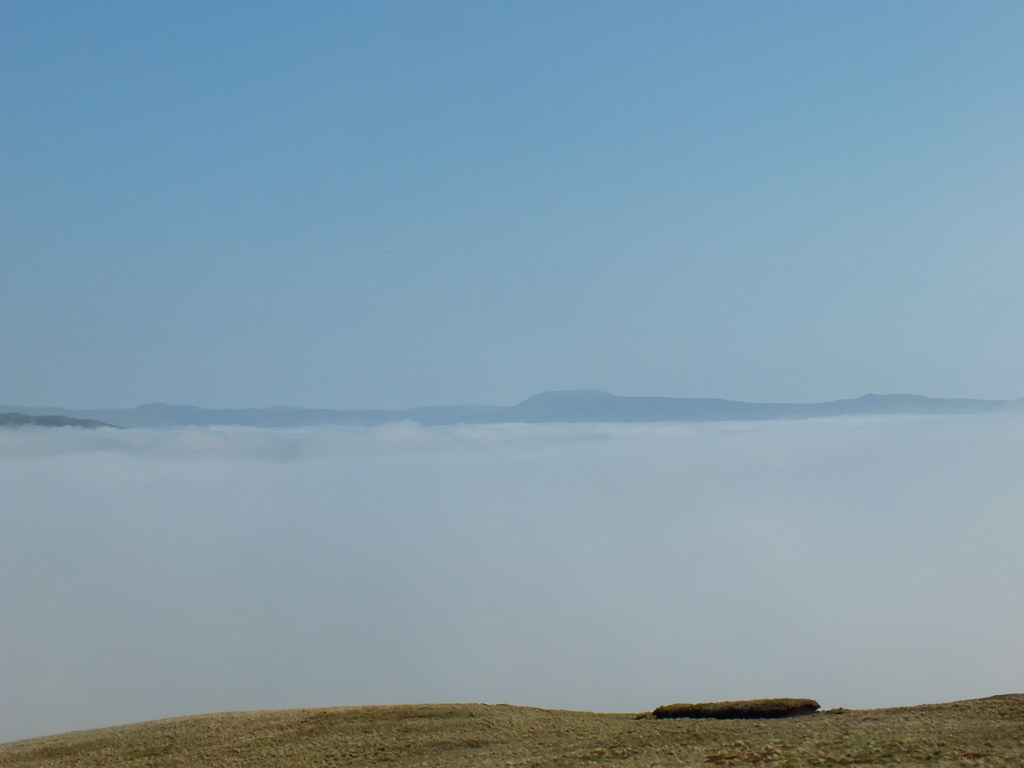 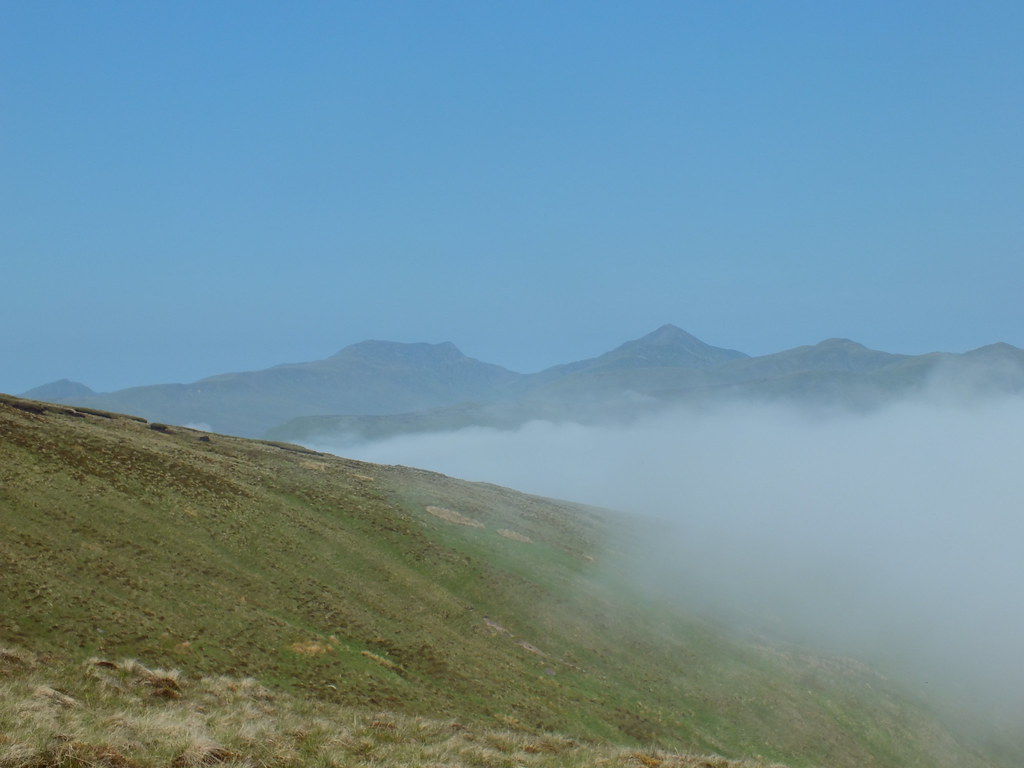 Proof that the sun was winning 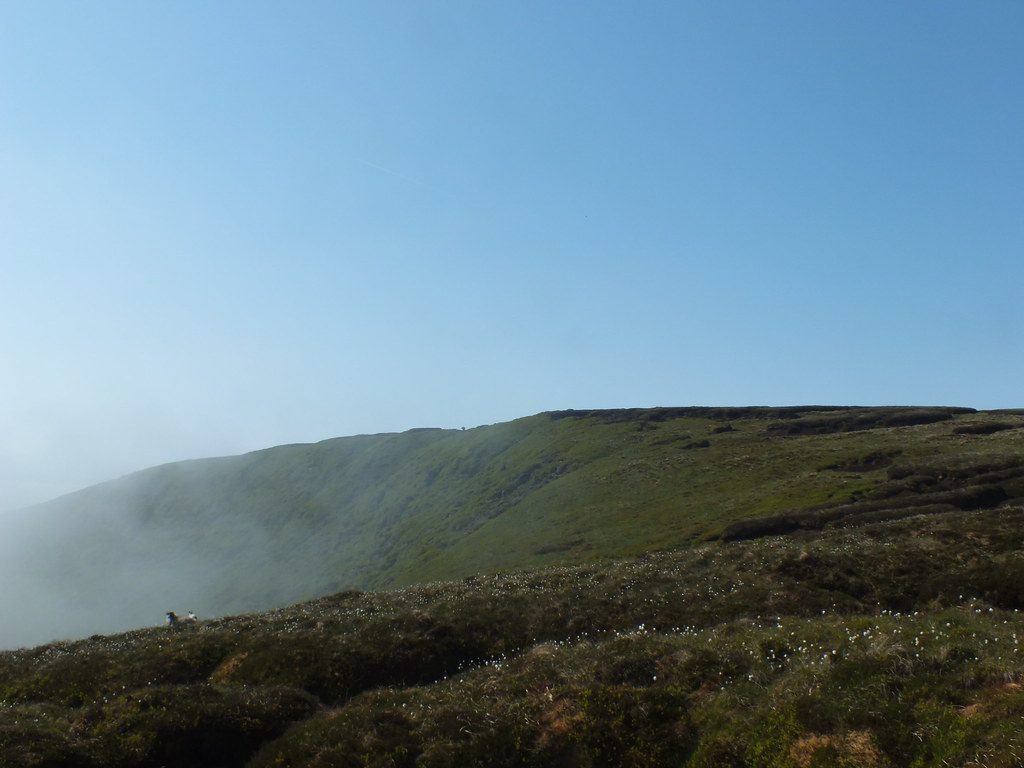 Peat hags and there will be lots of them 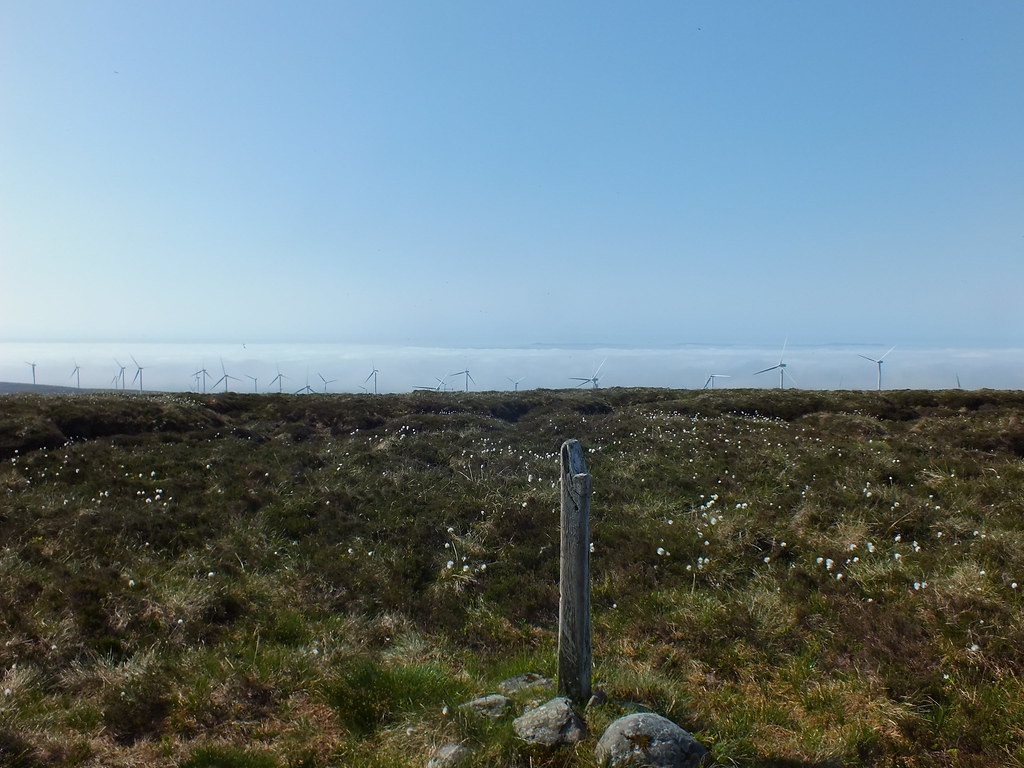 Not the most exciting summit

As you can see from the summit shot, there was something lurking in the background that would encroach on all the photo's to the south. As there was not even a gentle breeze the big machines were not producing any electricity at all, however they were still making that annoying whirring noise 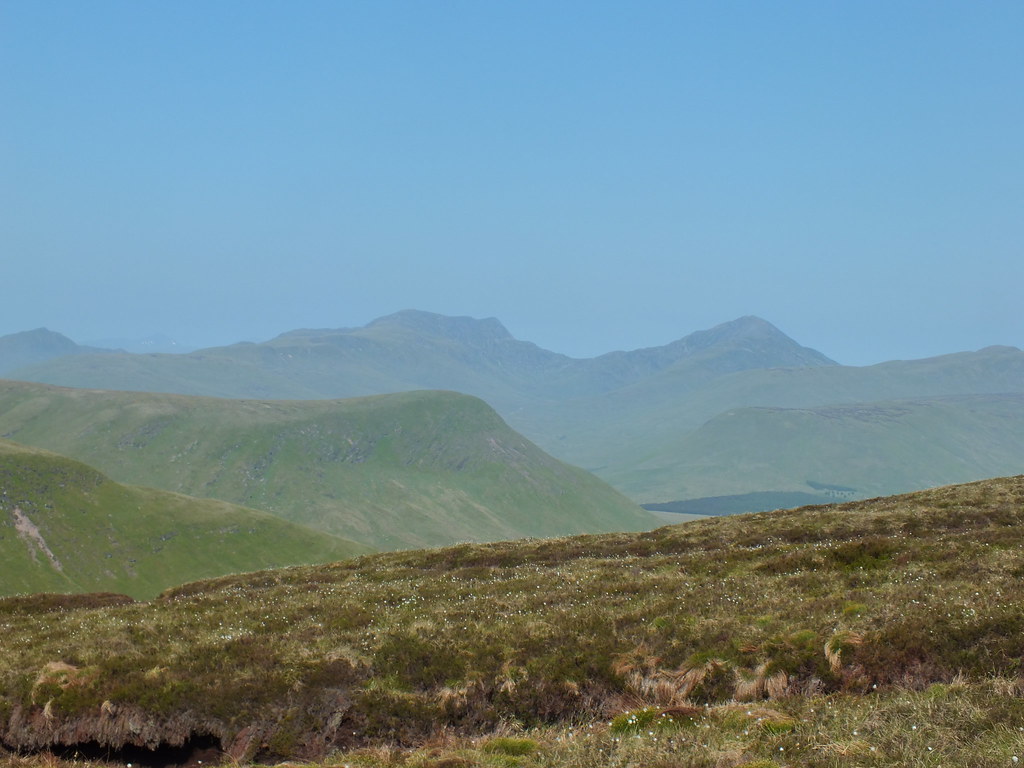 With hindsight I should have taken lots more photo's of the terrain as peat hags dominate most of the walk, especially on the higher ground. We were very grateful that the ground was exceptionally dry and the peat hags were easily negotiated. 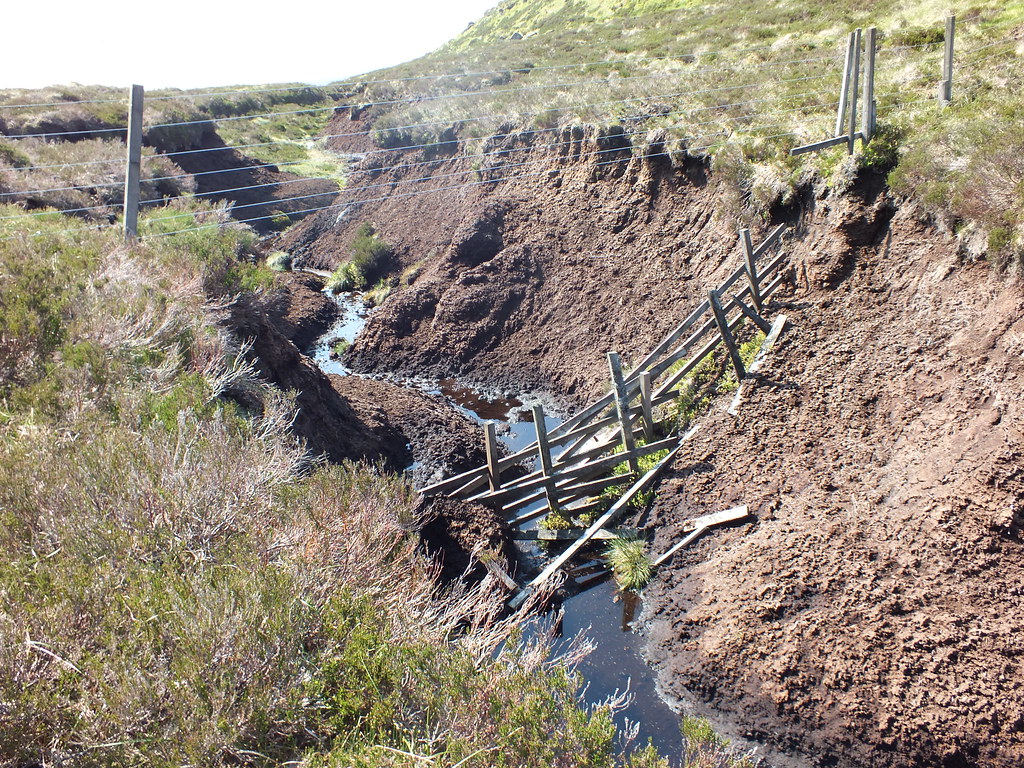 Typical hag, the only one we found with any water in it 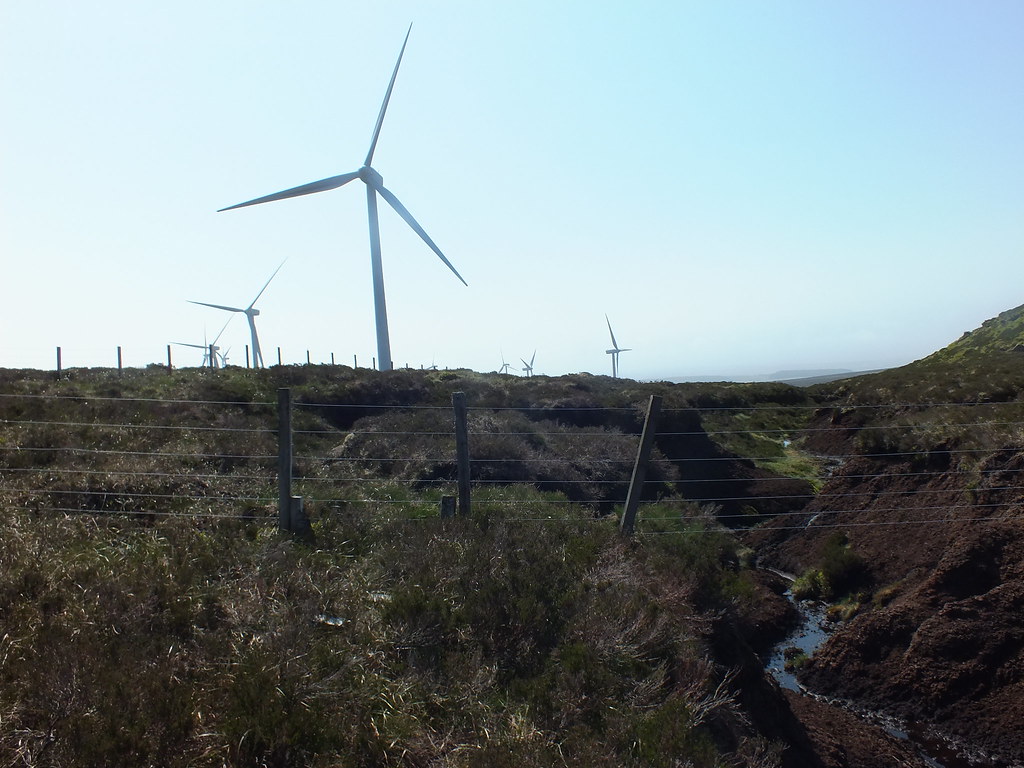 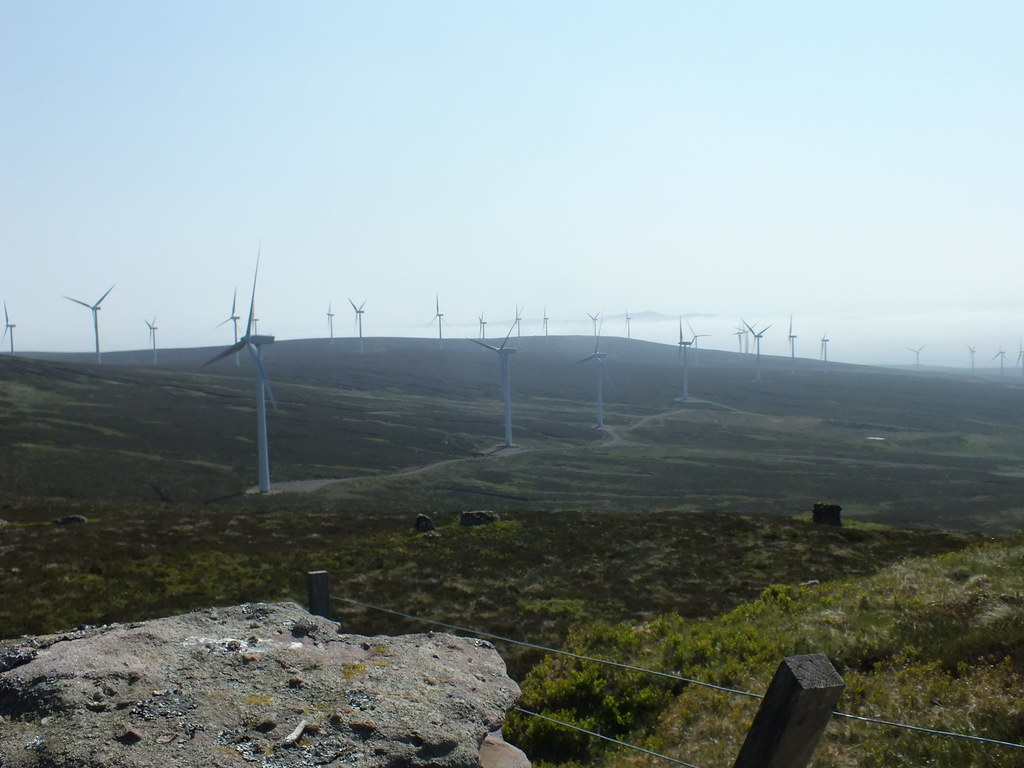 Quite a few of them 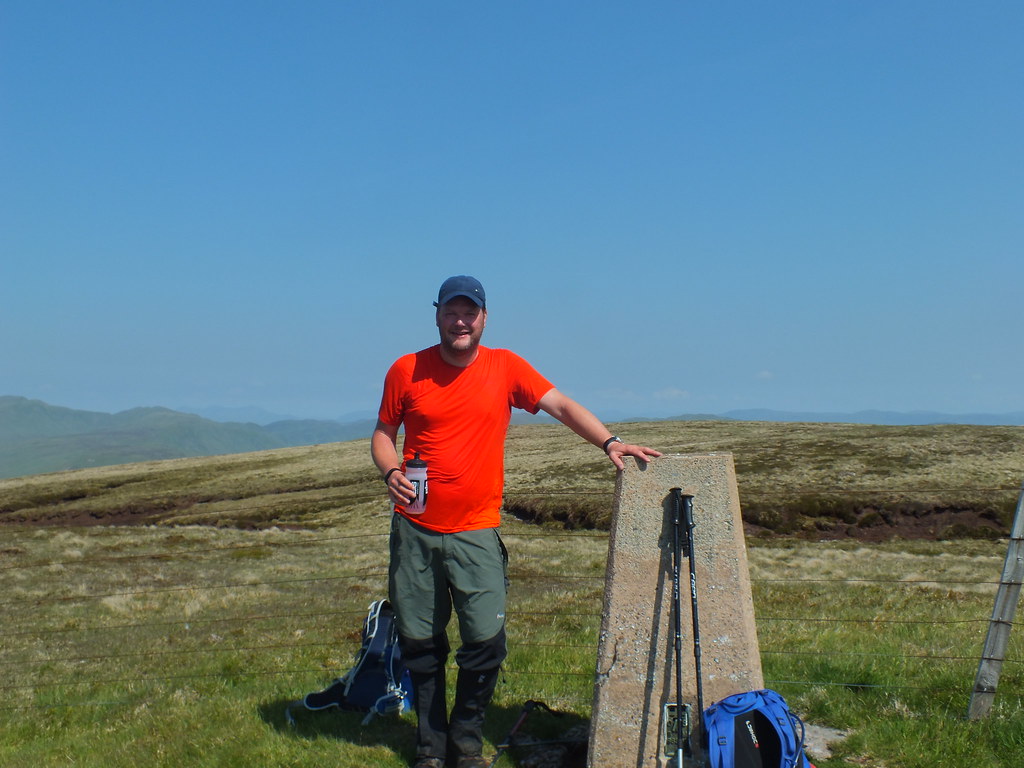 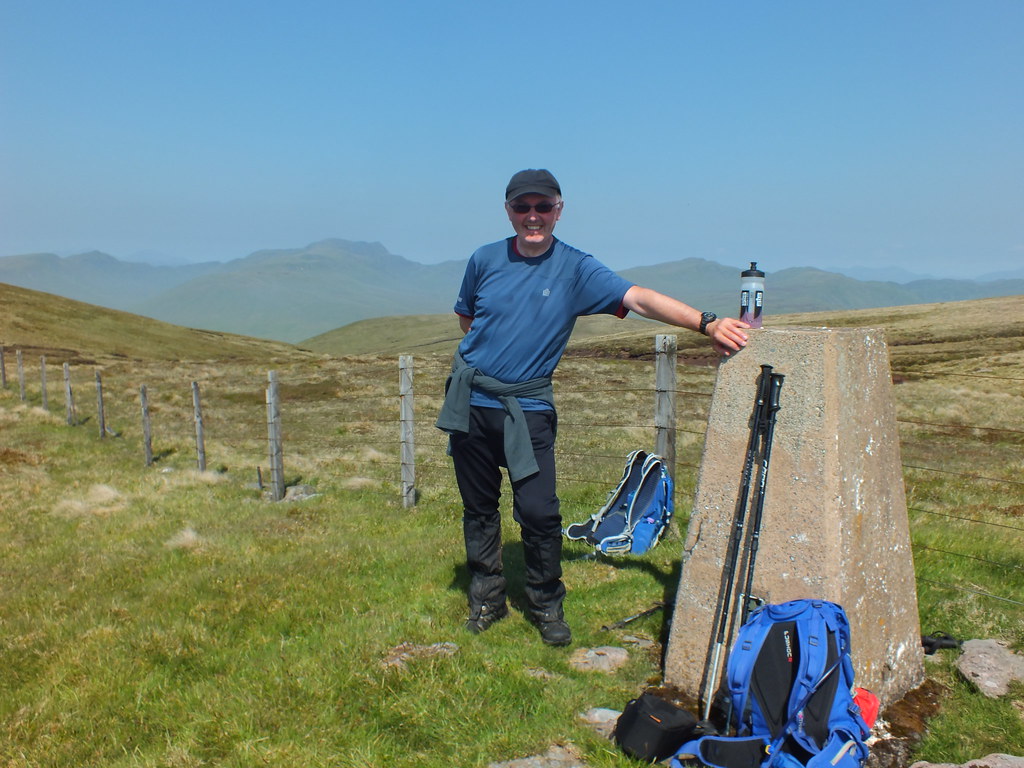 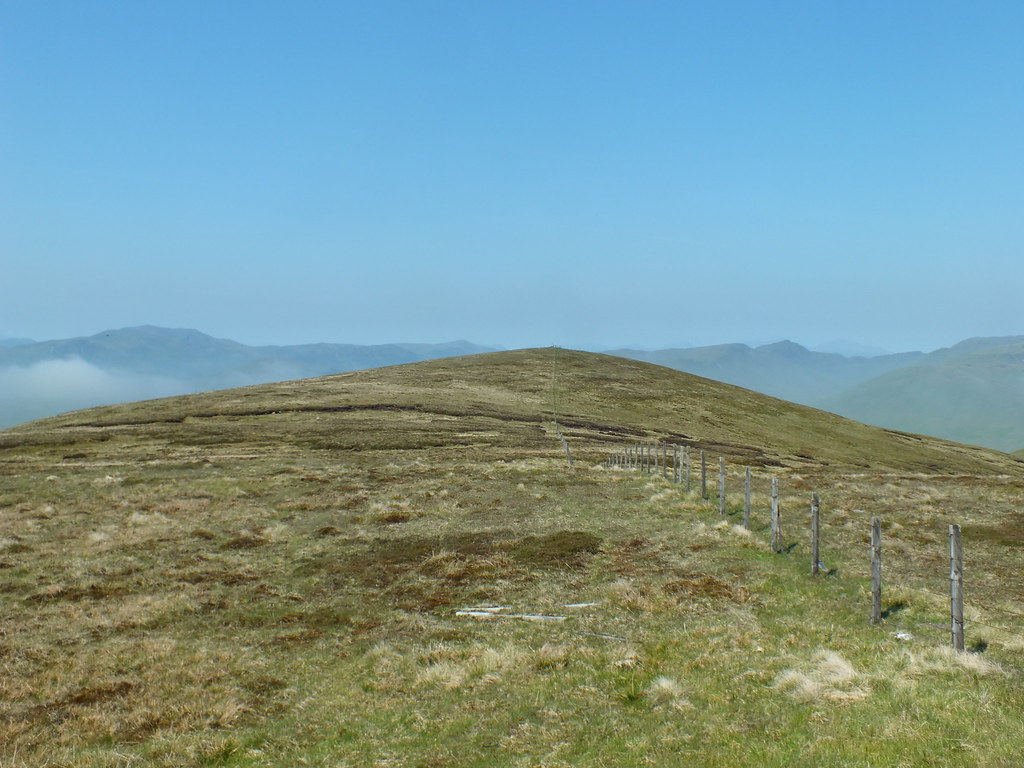 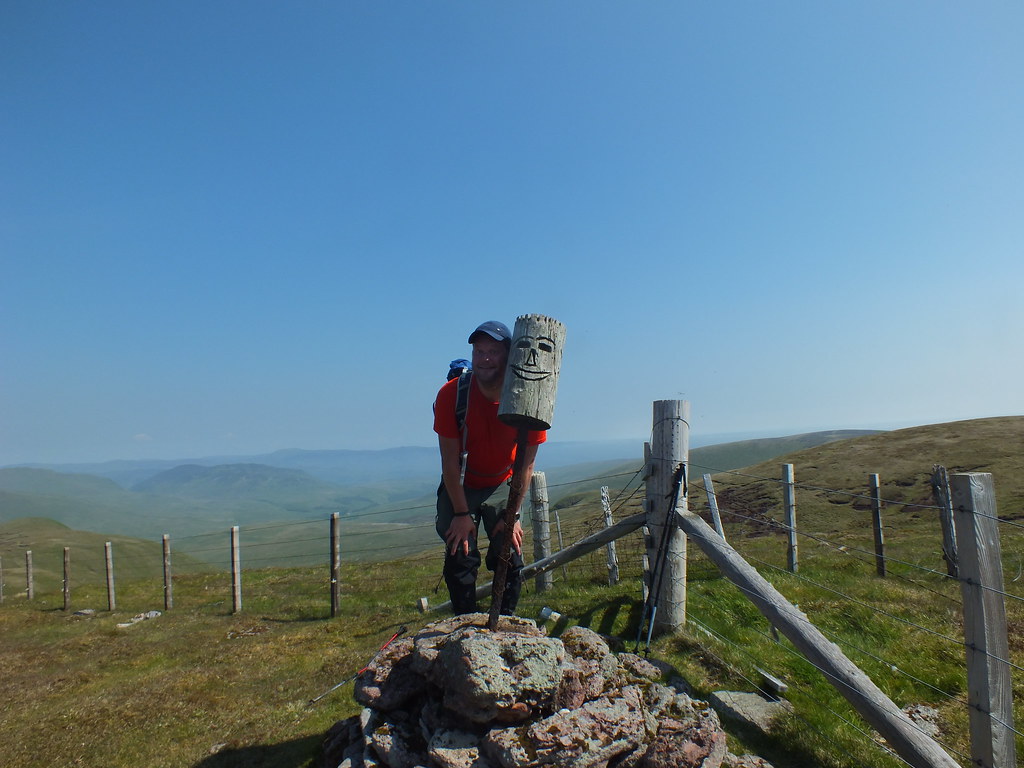 This carving is at the end of the fence 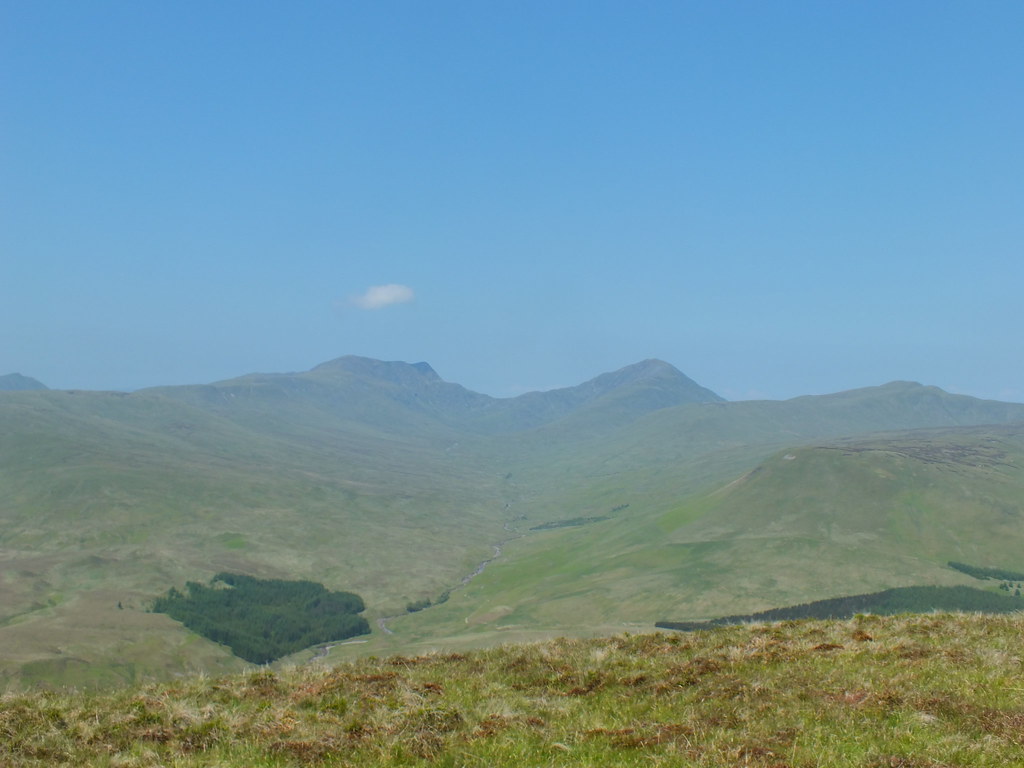 Final shot of Vorlich and co

Now to the descent, we north towards Am Beannan and the plan was to descend to the east, however when we looked at the descent to the east, it was almost vertical so we 'binned' that idea and went down the obvious shouder to the north. It was still steep but it was an easy descent as the grass was dry and we could see where we were heading for. 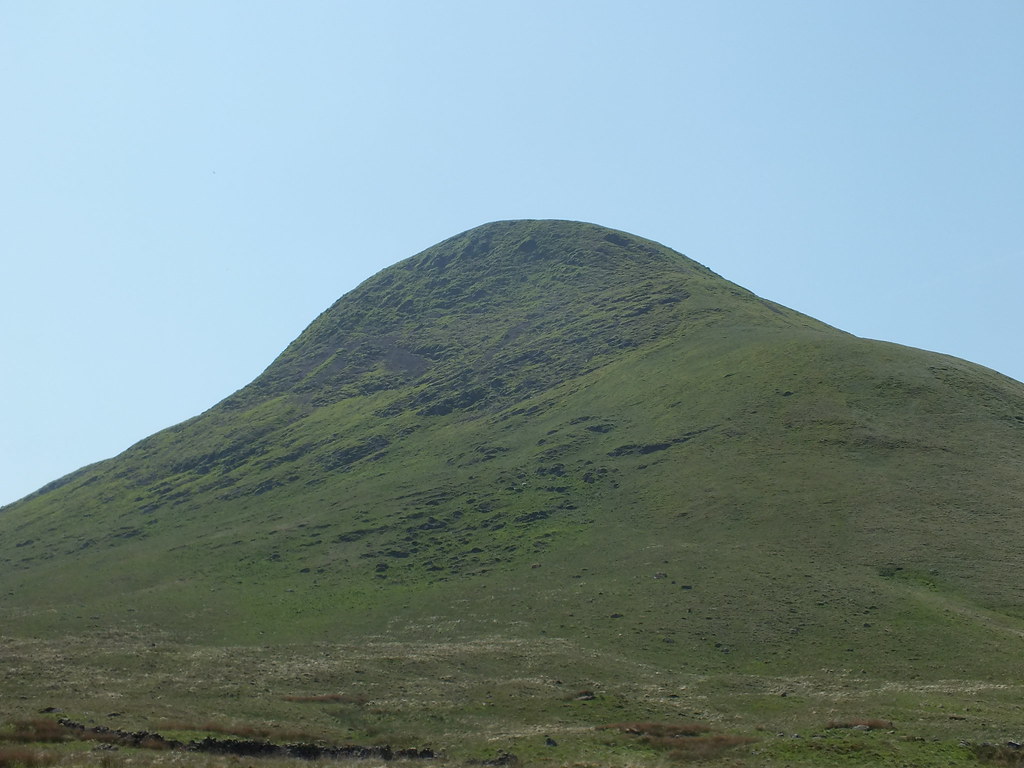 Looking back to Am Beannan, you can see the rather steep side

Once we reached the lower ground below Am Beannan, we were heading for the single track road that would take us back to the car and it wasn't long before we reached it and then it was just a matter of following the road back to the car 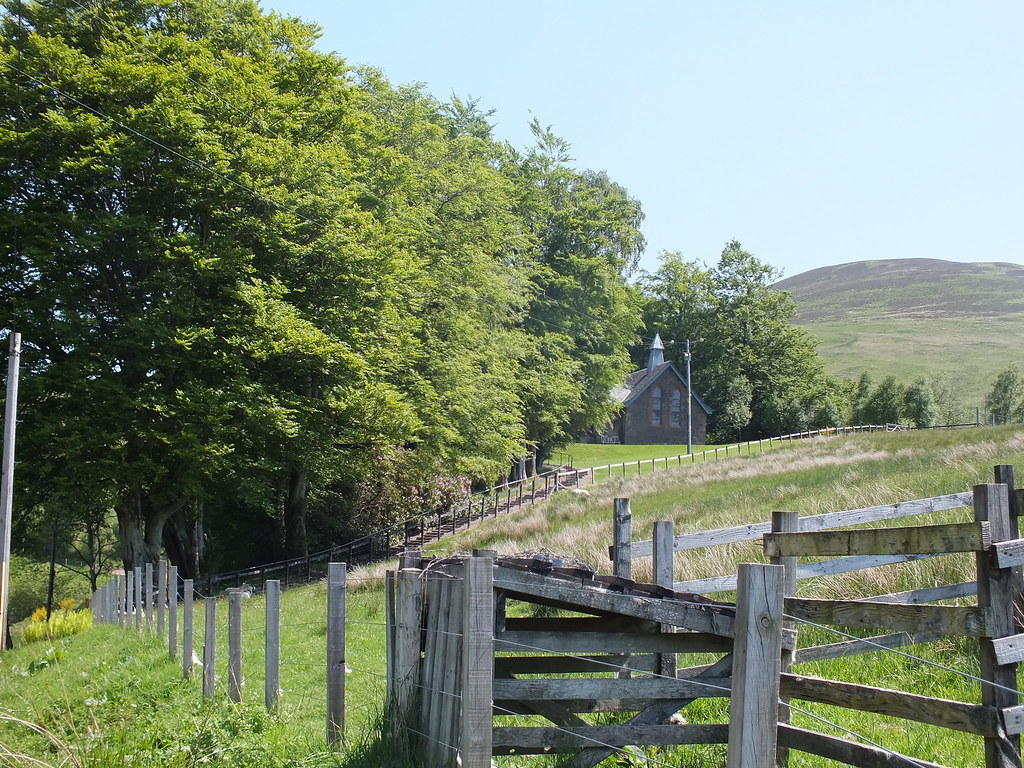 After plotting our route Naismith would only manage it in 4hrs 11mins so our time was rather pleasing, it's not often anyone gets to beat Naismith

Thanks to Hugh for his great company, hope the fresh Perthshire air was just the tonic you needed

Sorry about my poor navigational skills whilst driving, I should have listened to the satnav this time

You're a machine with these reports Martin!

Lovely photos, inversions are so awesome

Hi FF - glad to see you enjoyed your day (before the weather changes - when did it last rain?).

Did these two anti clockwise and found the walk between the two hills a bit frustrating with all the diversions to find ways round all the peat hags.

Thank you Martin for a great wee half day and for the wee report. Coming out of the clag was something special as it usually stays put when I'm in town. It was fantastic seeing that side/aspect of Ben Vorlich and Stuc A Chroin. Spot on about the peat hags, they were plentiful and I could imagine make this walk a misery at other times of year.

Looked beautiful - My dad was in Glen Lyon and has some equally tantalising pics of the inversion. beautiful weather the noo

Another nice walk, Martin. I particularly like Ben Vorlich and Stuc a' Chroin peeping above the clouds. I was out with Skye team member number 6, Pam, on Sharp Edge that day, getting in some pre-Cuillin training. You should set a good pace for the Knoydart team; that will help us get down in time for the evening meals Karen has booked