In December 2005 I was staying at Rosthwaite, Borrowdale on a mid-week walking trip with Richard. The first morning looked really unpromising, low cloud and very frosty. We decided to go onto Dale Head via the Rigghead Quarries route opposite the village.

The route starts off down a lane to the river, over a lovely packhorse bridge, across the fields and then starts off uphill on a track heading straight for the cleft of the gill hiding the quarries. It is a short, steep climb to where the route which ascends from Grange to Honister Pass crosses. Our route carried on upwards into the narrow and dark defile of the gill on the quarry track. It soon started to get steeper and also icier as this track never sees the sun in winter. As we reached the really steep section by the quarries we found there was no grip at all due to a thick layer of hoar frost so we invented a new form of step-kicking – step scuffing! We found that for each step, if we scuffed the surface a couple of times before committing a boot to it, we could scuff all the hoarfrost off it and get a decent grip. A couple in front of us weren’t keen on the slippery surface either and headed off steeply up the rocky mountainside – a north-facing slope much steeper than the path and a big mistake in my view... They looked unhappier as they got higher! We continued through the quarries until the path levels out quite a bit as it goes towards the summit of the pass just by a grassy tongue. We then emerged into bright and beautiful sunshine and a glorious inversion. Warmth at last – a relief after the bitter cold up the quarry track.

The track then crosses what would normally be awful bog to Dalehead Tarn – today it was frozen solid so a much easier walk – you just had to watch for patches of very solid ice on the surface here and there. By the time we reached the tarn (one of my favourites) it was getting very warm and we stripped off a few layers, had a hot drink and fed grapes to the local sheep (they preferred Richard’s green ones to my red - think they're juicier

From the tarn the track immediately ascends a steep slope on stone-pitching up to Dale Head’s shoulder above Gable Crag. It wasn’t particularly icy so was just hot work. By the shoulder I was down to shorts and a sleeveless top as it had become hot – it was more like June than December. An elderly couple were descending and asked us what the Rigghead path was like – we told them to avoid it as it was bad enough in ascent, never mind descent!

From the shoulder you turn left uphill briefly to the top of the climb and then right to the summit cairn – a very substantial and well-built pillar. There were people scattered around the cairn sunbathing in shorts and t-shirts drinking and snacking. By now we were surrounded by a sea of cloud in all directions and everyone’s cameras were going non-stop, including mine. We continued along the narrowing ridge to Hindscarth and along it’s ridge to the summit – camera clicking all the way. 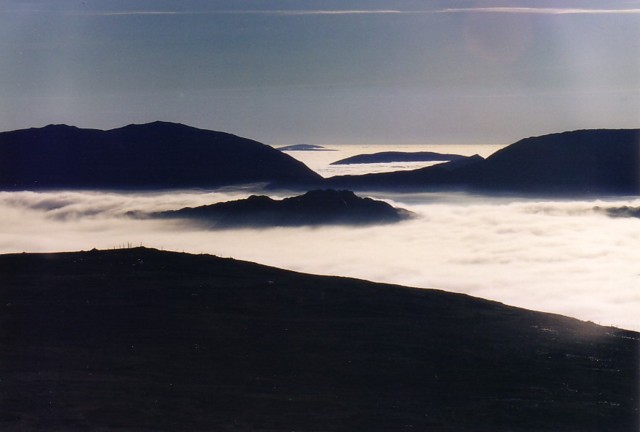 Then down the little path which cuts down from the summit diagonally to the col and up to Robinson. From Robinson the views changed from the felltops at the head of Buttermere to the Grasmoor group. and then took the more sensible route to Honister Pass. We descended back to into the cold and the cloud near the pass. There was a short, sharp descent down a bank and suddenly we landed on the road in the path of a car – the visibility was that awful!

From the pass we took the excellent track back round Scawdel Fell to our original route (this is the path which goes back to Grange) and descended back to the packhorse bridge and Rosthwaite. It was still cold and miserable in the valley and had been all day.

These illustrate the difference between the cold, icy north side of the mountain and the sunny bits...