Having made arrangements with my workmates Lee, Bobby and Colin to take a trip to the hills while on holiday during the Glasgow Fair the date was set for Thursday as the weather was forecast to be at its best. So the four of us met in Dumbarton at around half seven, and until this point I wasnt 100% sure of our days destination, especially as it was cold and raining. But Lee was like a kid at Christmas at the prospect of traversing the ridge, and with assurances that the weather would improve we set off for Glencoe.

We took two cars and left one past the Clachaig Inn near to the point where our path would bring us out and drove to the small car park on the North side of the road at the foot of Am Bodach. From here the ridge was shrouded in mist and it was still slightly raining. The climb to the summit was a lot harder than i was expecting and my legs, unused to such abuse, were complaining the whole way up. Still I got there in the end and spent a bit of time recovering on the mist covered summit. I never even got a glimpse of the Chancellor. It was here that we met up with Paul from Norwich who was waiting to see if the weather would improve. We then set out together, as the mist was beginning to clear and we began to see what awaited us. The first descent from Am Bodach set the tone nicely, and a few careful moves were required to reach the ridge below.

Not long later we reached the peak of Meall Dearg, and i claimed my first munro, starting out as the Rev Robertson ended. The views were, well non-existent but we could tell that it was going to improve as we moved further on. Next up, the chimney and the Crazy Pinnacles proper. Good easy climbing, and one or two limpet impressions saw us through. The weather by now was perfect and we were treated to majestic views in every direction. Having completed the ridge in such good conditions makes me respect those who traverse in adverse weather, and truly appreciate the effort those who cross in winter put in. One of the last pinnacles View to the road With the hardest section over it was a fairly easy ascent to the summit of Sgorr nam Fiannaidh and a well earned rest, before taking the safer route down past the Pap of Glencoe to retrieve the car. After dropping Paul off we headed to the Kingshouse hotel for refreshments and began making plans for our next venture to the hills. Glencoe for sure, watch this space. 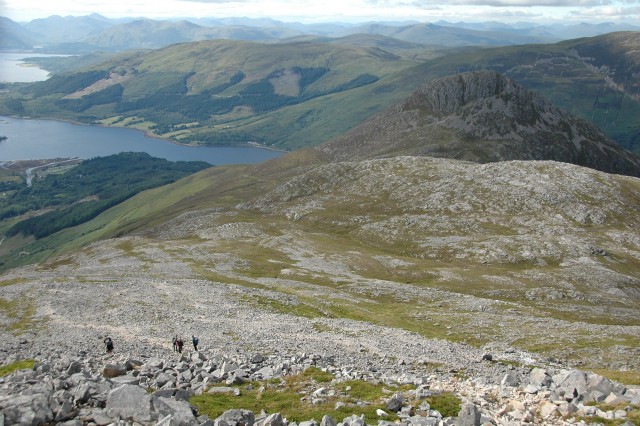 A final look at the ridge from the road

You've got some excellent photos here KW, well done for doing the ridge! No probs with vertigo or any hairy moments?

i hope to do this thrilling ridge sometime next year

Excellent stuff. Great account of the ridge traverse. My avatar pic is me looking across to the A E Ridge in winter thinking about what it'd be like to be crossing it right then!

Can't wait to do it myself sometime....in summer to begin with!

Nice report and some nice pictures. Brings back memories.

Great pics kw, best one I've seen of the chimney bit. Looks a longer climb than I thought it was.

Guessing you are ok with exposure, or did you get vertigo at any point?

Was there any loose bits on the ridge? Only asking as a couple of walkers I spoke to in that area last May advised against doing the ridge as some parts were wearing pretty badly.

Thanks for the replies guys, I dont think I suffer from vertigo as I was perfectly comfortable looking down even when on the exposed parts of the ridge. Thats not to say that there werent some hairy moments. I remember one near to the end of the pinnacles where we tried to go round to the side of one and couldnt see a way to go, so we had to backtrack and climb over an awkward boulder with very little to grab onto, ended up on hands and knees! And the pinnacle in the picture was another, you have to climb up the fissure to the left of centre but you have to hang your left leg over the side with a very steep drop only a foot or so away. All good fun though, well mostly!

I dont know about the ridge crumbling, having no way to compare, but it is narrow at some places. Also some of the descents from the pinnacles require you to land on very small ledges at the bottom. I had an amazing day out though and cant wait to get back for another day in the hills.

I thought that was how you were supposed to do the Aonach Eagach.

This is a great report with some brilliant photos. Brings back hair raising memories from a few years ago though. We were approaching the pinnacles when we heard a shout and a climber had fallen off the first pinnacle and landed on a grassy ledge about 100 feet below. We had a rope with us and got down to him. One of my friends had a flare and fired it off. It was seen by a motorist who phoned mountain rescue. A helicopter came in within 30 mins - called from rescuing a charity walker who had fallen off Ben Nevis chasing after his sponsor form when it was blown out of his hands! All true. Both incidents were in the national papers the next day. "Clive's lucky grassy ledge"was the headline. Without it he would have fallen a long long way. As it was he was very lucky. He survived the incident and we went on to complete the traverse. As you can imagine the beers that night tasted very good. A salutory reminder to treat our mountains with the utmost respect.

still looks scary and even more difficult than i remember from 20 years ago....!!!!
we used ropes for some of the more tricky bits.
remember being on hands and knees for most of the way !!!!!!
well done.. its elating to complete this (still in one piece).

These pictures had me drooling in eager anticipation of the fine day I eventually get around to doing this traverse.

Graeme Dewar wrote:These pictures had me drooling in eager anticipation of the fine day I eventually get around to doing this traverse.

Very much the opposite feelings, I'm afraid... A very dry mouth and definitely not looking forward to this. A major mistake reading this report just after the In Pin ones

Time for some quality single malt and chocolate to get myself together again.

Why anyone would do this as their first munro is way beyond me, but well done just the same!

Graeme Dewar wrote:These pictures had me drooling in eager anticipation of the fine day I eventually get around to doing this traverse.

Very much the opposite feelings, I'm afraid... A very dry mouth and definitely not looking forward to this. A major mistake reading this report just after the In Pin ones

Time for some quality single malt and chocolate to get myself together again.

Why anyone would do this as their first munro is way beyond me, but well done just the same!

Sounds like you need to log off now, stop reading about these things and go and lie in a dark room with the whisky and chocolate! Just look at these guys at the top of the chimney though! The're having a blast! Can't wait to see them get to the Cuillin and the Liathach Pinnacles! Anyway, I don't think mountain coward has replied to this one yet has she? She's probably still in therapy as we speak.....can't wait to read her thoughts on this one when she finally gets round to it!

It wasnt really my decision to do this one first, but I was happy enough to go along. It was an unbelievable experience, albeit as I say in very good conditions. Not sure if I would have enjoyed it quite so much if the wind was howling and the rain pouring. I feel now that I have managed this one with no real problems that I am now able to go on and enjoy more of these types of walks with confidence, so from that perspective im glad to have started with a trickier summit. Next up Bidean nam biam on Sunday, cant wait to get back to Glencoe, im hooked.

kw1980 wrote:cant wait to get back to Glencoe, im hooked