The Loch an Daimh double-act

The Loch an Daimh double-act


'Fresh' from doing all 10 Mamores two days before, on Sunday the 5th June I looked for a reasonable day out not too far from home. This was, in my head, to loosen off, and to reignite the flames of that particularly fine Mamores walk. I was suffering from a bit of mental come-down, and wanted a decent day to round-off the weekend.

Eluding me on my travels to date were the two out-of-the-way Munros of Loch an Daimh. Namely, Stùc an Lochain and Meall Buidhe. These were always on my 'Ach, I'll get to them soon enough' list, but owing to their 'there and back again' recommended route, I parked them at the back of my head. But, a good forecast and dry underfoot conditions meant that Sunday was an ideal day for it.

Looking at the OS map I decided that there must be a better way than trudging up to them one at a time from the dam car park. So, being inspired by bobble_hat_kenny's fine account of his circular route I decided I would stick roughly to it. 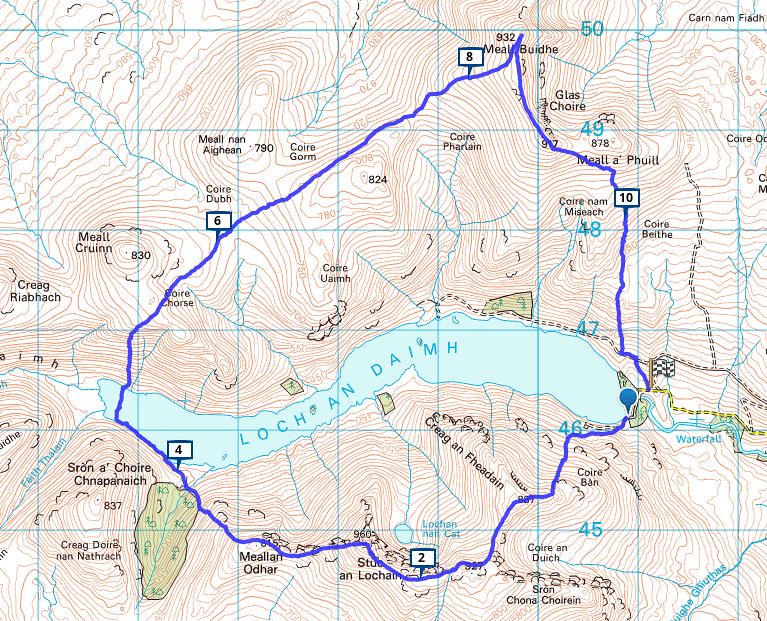 I arrived 6.45am at the car park adjacent to the dam. It was just high enough to be above the mist that had been with me since descending into Glen Lyon from the Ben Lawers road. A couple of people emerged from their tents into the heat of the already baking morning as I passed them. I parked up and got going. No boots or heavy pack today. The enemy was going to be the heat and the clock. I needed to be back in Stirling by about 12.30pm, so no hanging around. Trainers and light pack it was! This would turn out to be a good move in terms of bogginess, as the ground was bone-dry. 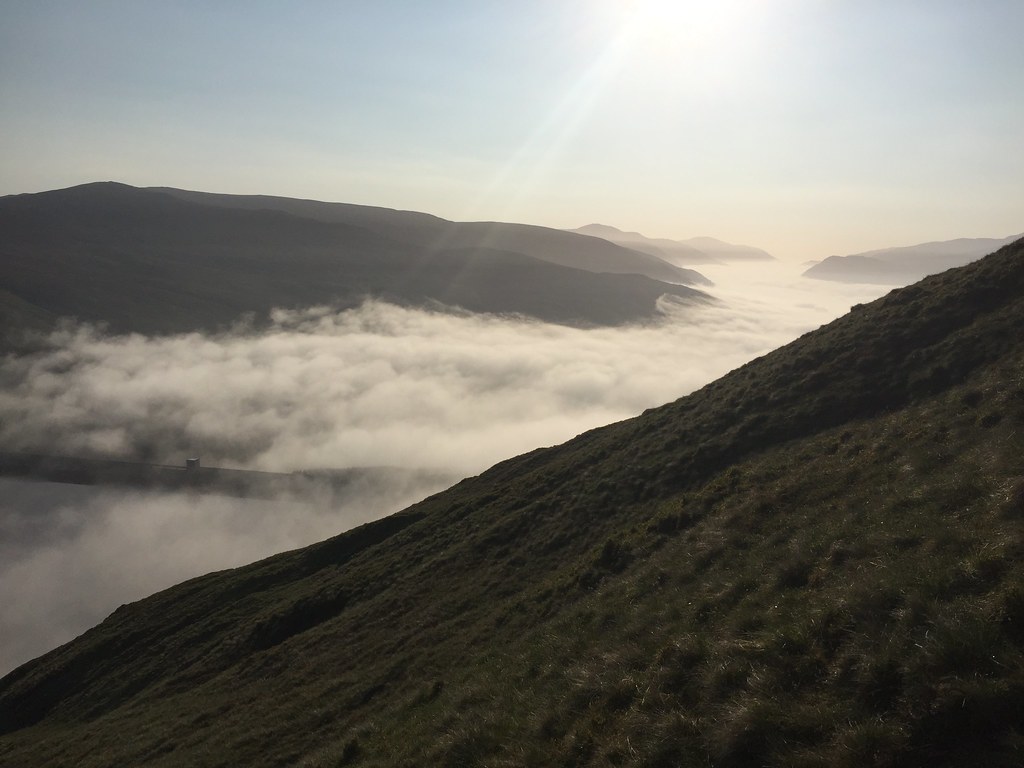 Looking down Glen Lyon, bathed in thick early morning mist, from the slopes of Stùc an Lochain

However, any thoughts of jogging up the first peak of Stùc an Lochain evaporated in the heat of the morning. The first part up the path-cum-stream-bed was very steep, and a brisk walk was all that I could muster. That said, given the starting altitude was at 440m, this meant only 500m was required to ascend before the summit was achieved. Sure enough, before long I was on the 888m summit above Creag an Fheadain. Once here it was easy going to the summit ridge, and 45 mins or so after departing I was atop the first summit of Stùc an Lochain. I had a good drink of Lucozade from one of my two bottles and pondered the next stage. 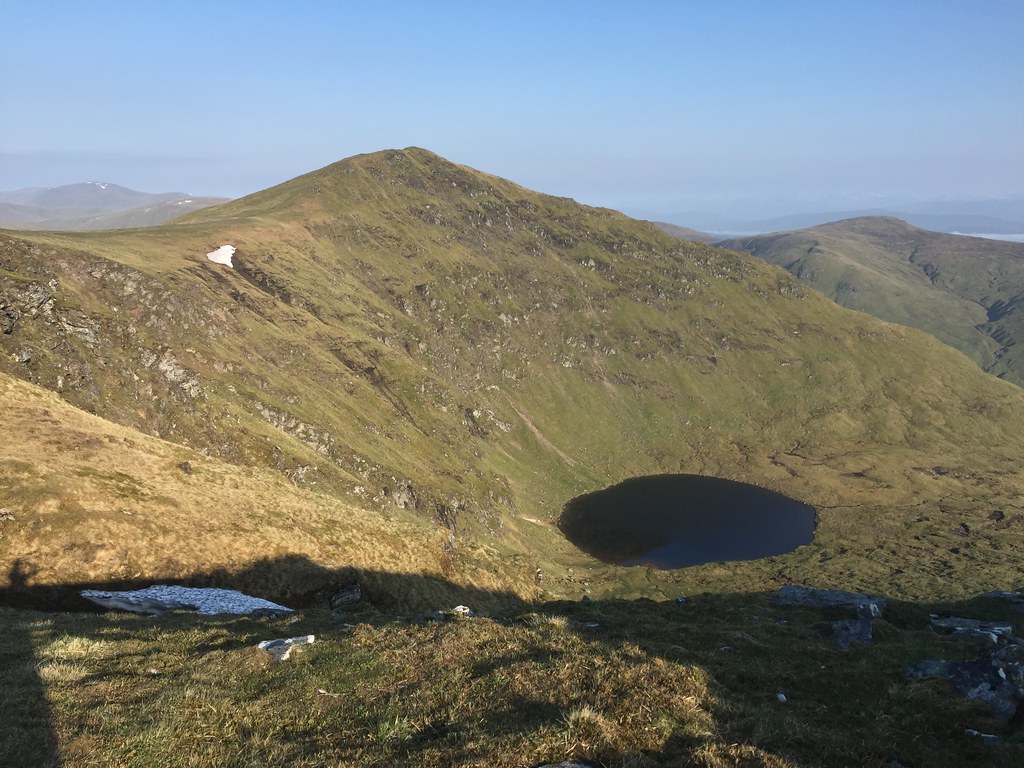 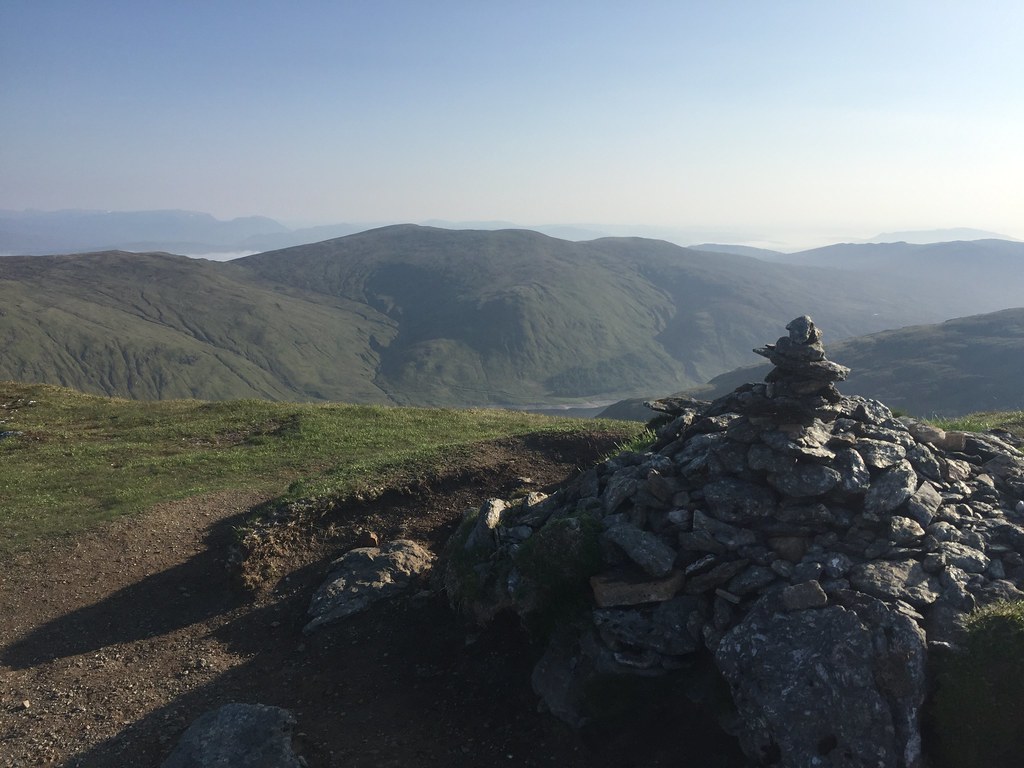 In Kenny's report he followed the fence posts and took in the adjoining Corbett of Sron a' Choire Chnapanaich. To my eyes that looked like a longer route than I'd like. He also warned of the very steep descent from this peak to the glen floor. Unperturbed by such things (I love a steep descent and ascent) I decided to take a short cut and go straight down the NW ridge of Meallan Odhar. I suspect this was equally as steep as Chnapanaich's descent, but I leapt down in no time at all, and found myself at the loch very soon afterwards. 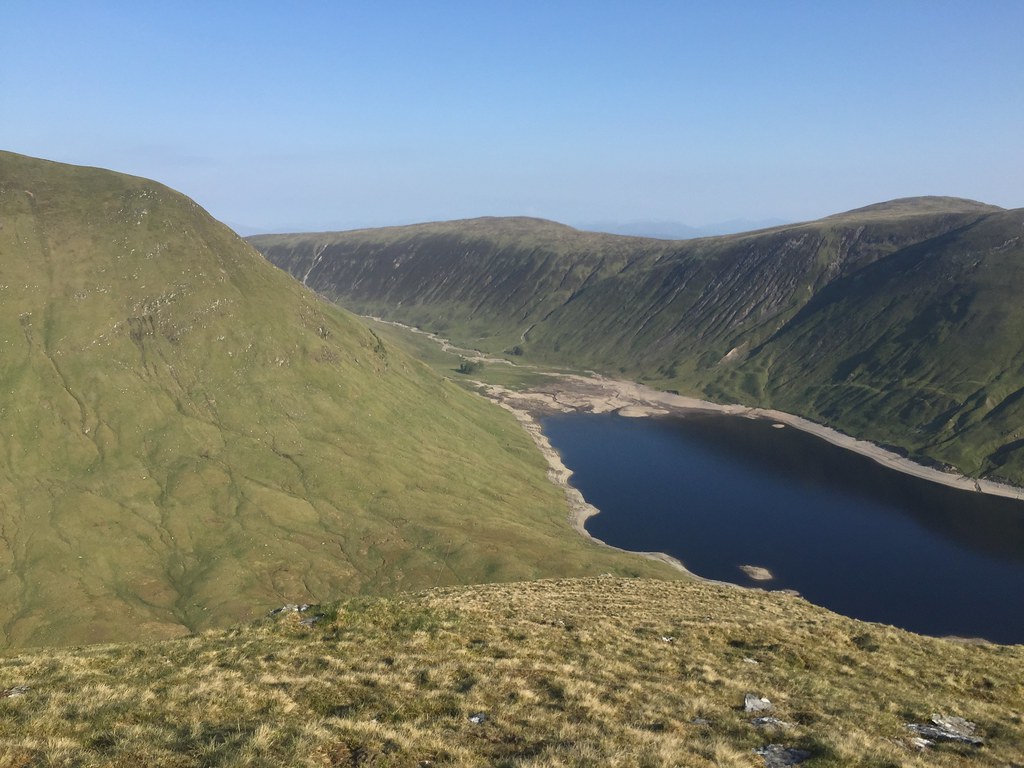 Almost down to Loch an Daimh

Panorama of the (very low) loch

From here it was just a case of walking along the exposed shoreline and deciding what the best method of re-ascent would be to take me up to the plateau and onward to Meall Buidhe. I did think about going farther west and making life easier for myself. By going up the gorge just north of the Eas Daimh I would have a longer, albeit more pleasant, stroll. However, every-conscious of time I decided to take the direct route... 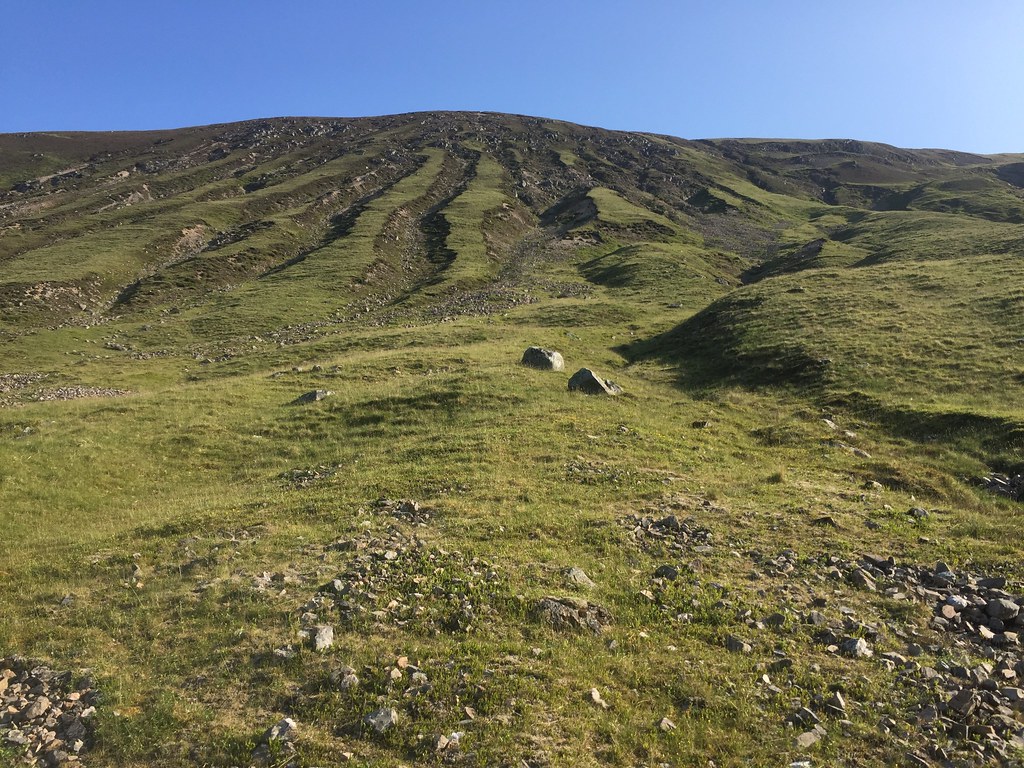 In the heat of the day, and with no breeze, this ascent can only be described as 'brutal', and 'not advisable'. It was a punishing and relentless 45-50 degree slog up. Frequent brief stops were required to gather my breath. 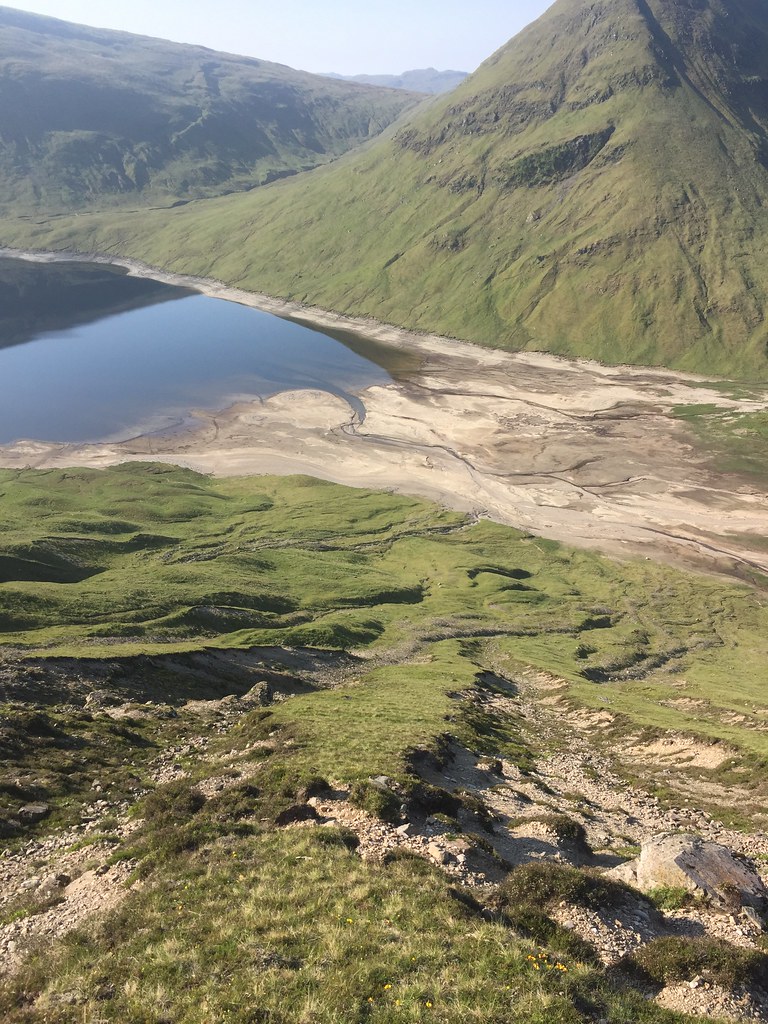 Soon enough, though, I was at the top and onto the high moor that connects all the way across to Meall Buidhe. The going was much better here, and progress could be quick. I elected to take a breather for a few minutes and then jog to the next summit. In very dry conditions, with few undulations, this proved relatively straightforward. The total distance here was about three miles. I would not recommend this in wet conditions, or in low cloud. Navigation would be tricky to the inexperienced. 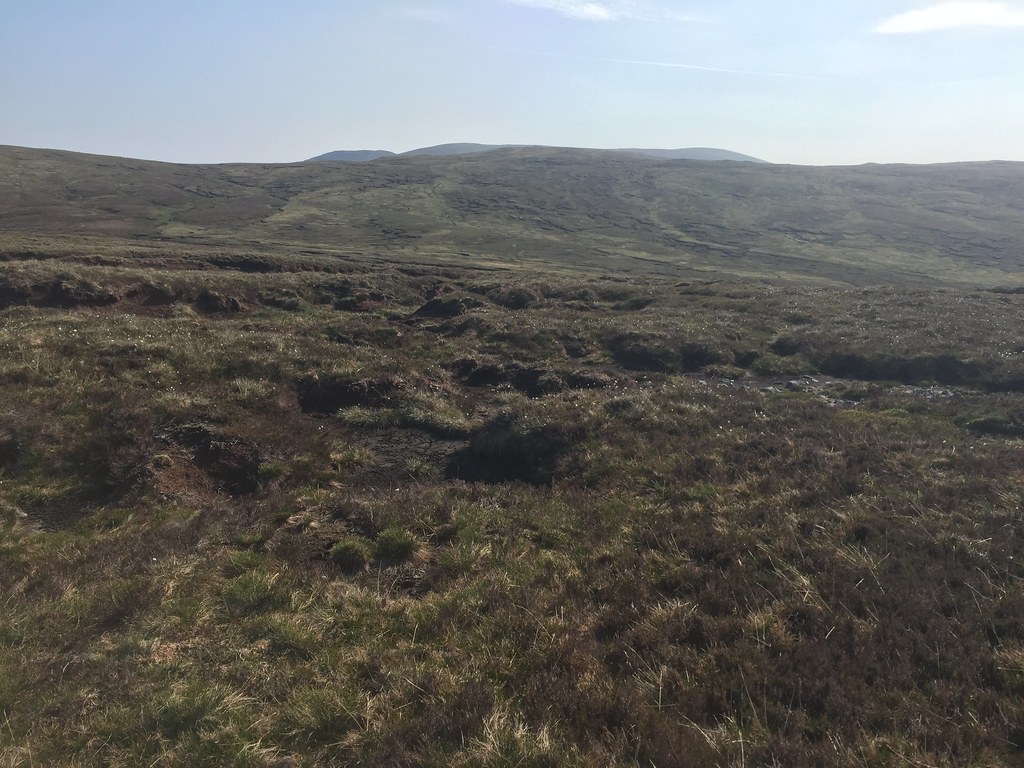 Meall Buidhe, the hill in the distance

The jog to Meall Buidhe was uneventful, save for disturbing a herd of red deer. The only issue now was the heat. It really was getting oppressive. Still, about 40 minutes or so later I was at the summit. 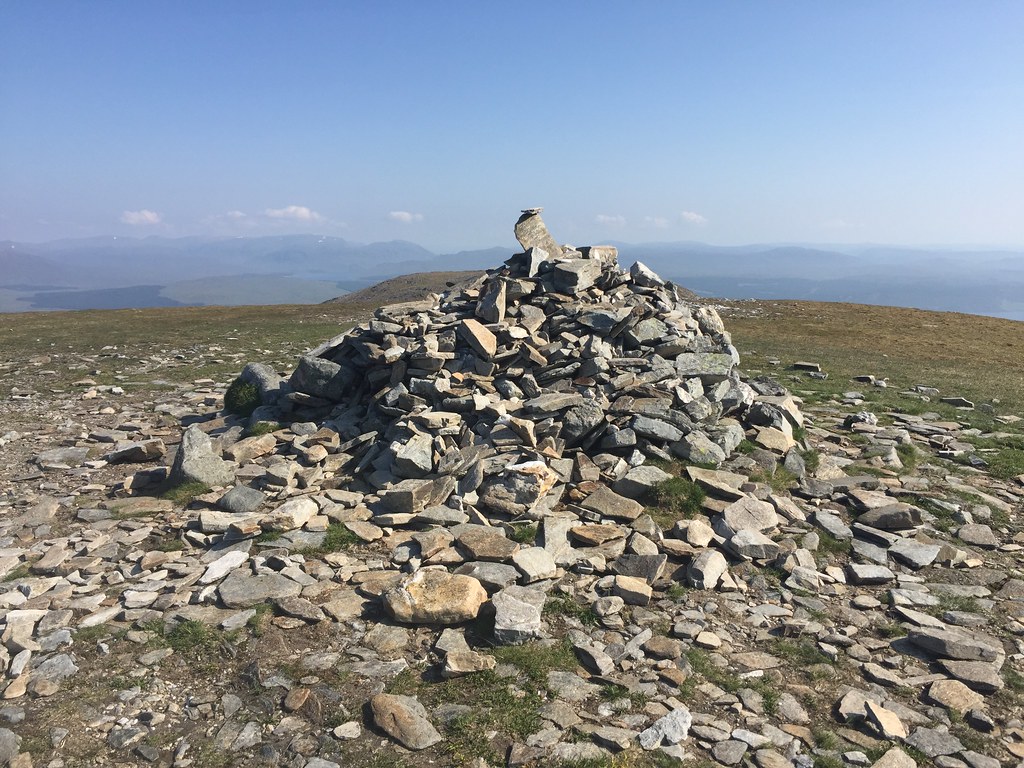 From the summit it was a breeze to get back down. The dry and soft ground made for rapid descent, and from the top of Meall Buidhe I was back in the car park in 20 minutes, a mere 3 hours after I left it.

Overall I would recommend this route in good weather for an experienced walker. It's not overly taxing, and I should imagine far more entertaining than doing both of them via the recommended route.