There are eight Hewitts to the west of Blaenau Ffestiniog, all quite close together. I decided to see if I could do them all in one day. I didn't quite make it but I did manage to bag six of them.

I started off from Tanygrisiau, with the first objective being Allt Fawr. There wasn't a path shown on the map, so I headed up the track past the quarry and then went straight up the grassy slope on the right. This was a steep slog but I was soon on the broad ridge leading up to the summit. I then followed the ridge around to the next three Hewitts, plus the Nuttall summit of Ysgafell Wen Far North Top. The GPS app on my phone was useful here, as without it it would have been hard to tell which of the various piles of rocks were the summits. Next I headed towards Cnicht. This was a couple of miles away across the plateau, along a slightly wet path. I then went back across the plateau towards Moel-yr-hydd. This turned out to be harder work than I'd been expecting. The path shown on the OS map quickly seemed to disappear into a bog, leaving an awkward traverse over a series of steep little ridges with bogs and lakes in between.
Eventually I got to the abandoned buildings at Rhosydd quarry, where I stopped for something to eat. I then managed to waste some time and energy going the wrong way up, before finding what should have been the obvious route up the quarry incline. The final ascent of Moel-yr-hydd should have been an easy stroll, but it felt like really hard work, so I decided that Moelwyn Mawr and Moelwyn Bach would have to be left for another day. 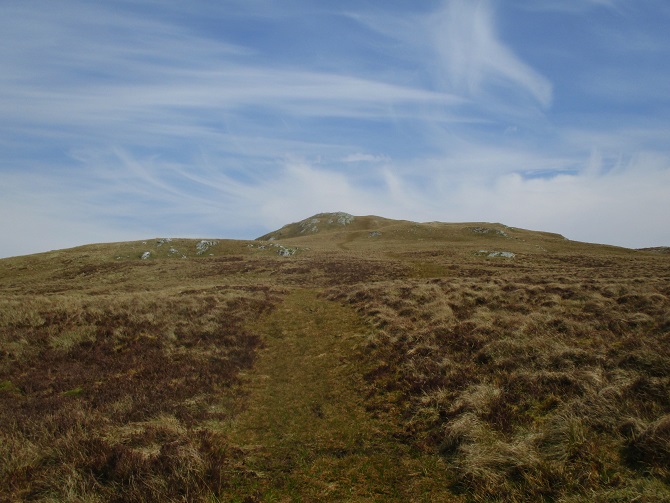 On the way down I was again hit by the Curse of the Disappearing Path, and ended up with a slightly scary descent down a very steep slope to get to the road leading back to the car park. 6 out of 8 ain't bad Andy, lovely pics throughout and obviously you just left out those last two so you could go back there