Set off from Morvich National Trust car park (annual membership includes free parking) at 6am passed the Outdoor Activity Centre, crossed bridge at Inchcro and followed path signed for Falls (of Glomach). On the open hillside at 75m the path forks - left for Falls marked by wooden post down to cross river whilst right heads to Bealach an Sgairne attained by steep zigzags (where a cairn marks a right fork approach for Beinn Fhada) marked by a large cairn. Took me 2.5 hours. Followed path down and round south side of Loch a' Bhealaich where a group of schoolboys, under the watchful eyes of a couple of leaders, had camped. After chatting, I left them to tackle Beinn Fhada whilst I continued to follow the path to watershed and roughly followed metal fence posts, which dog legged a bit, towards summit of Sgurr Gaorsaic 839m 5.5 hours with summit cloud coming and going (2 corbett baggers arrived simultaneously in 3 hours!). The metal fence posts had diverted east just prior to the summit down to 669m bealach (some of the upper slope posts had disappeared due to the steep ground land-slipping here). The fence posts rise straight up the opposite slope then, towards the top of ridge, turn left northeast towards Sgurr nan Ceathreamhnan's west top 1143m 8 hours. The main east top 1151m is a much airier and superior top attained by minor scramble down and across short narrow intervening ridge. The views are astounding as everything around is lower. Summit cloud cleared for 4 hours with cloud inversion to east.
Returned to west top and followed fence down south ridge but continued to Beinn an t-Socaich 846m to get good views of south side of SnC and Coire Allt an Tuirc. From there descended grassy slopes west down into the coire then southwest to corner of forestry fence whence west then southwest to meet path at watershed then back to Bealach an Sgairne and down to car at Morvich after 25.5km 2083m ascent 13.5 hours. 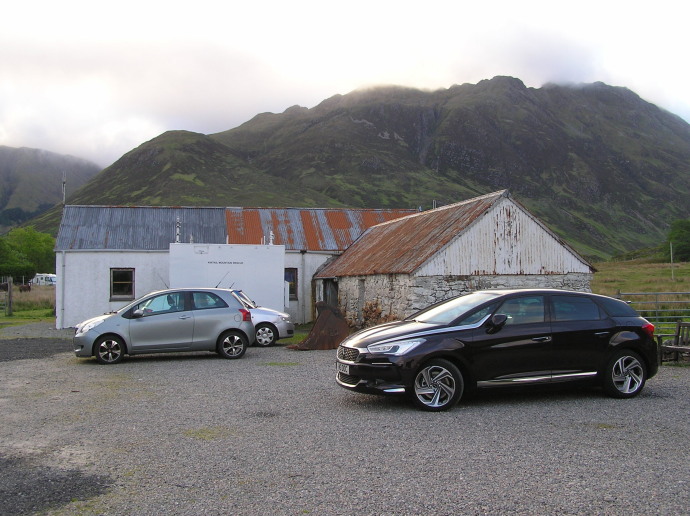 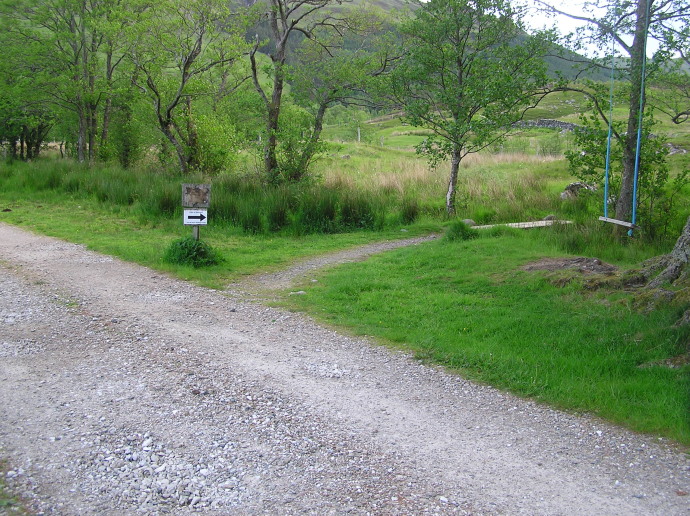 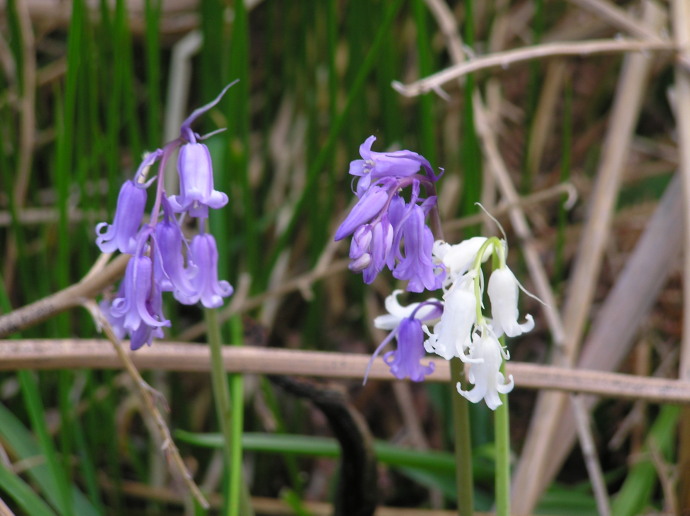 Path fork - left for Falls and right for Bealach an Sgairne 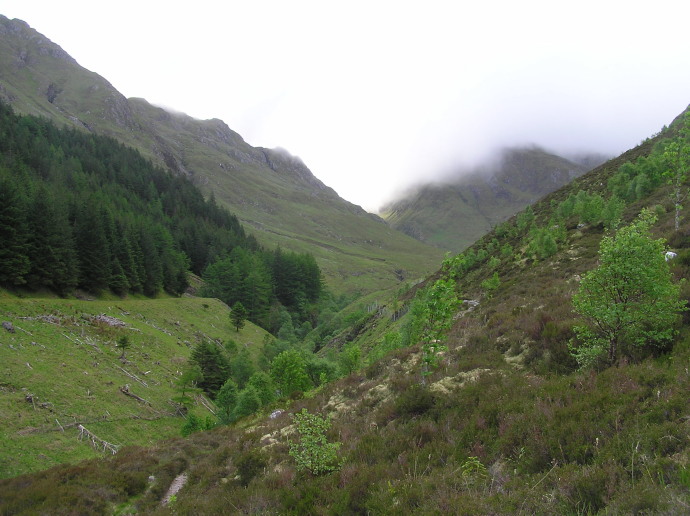 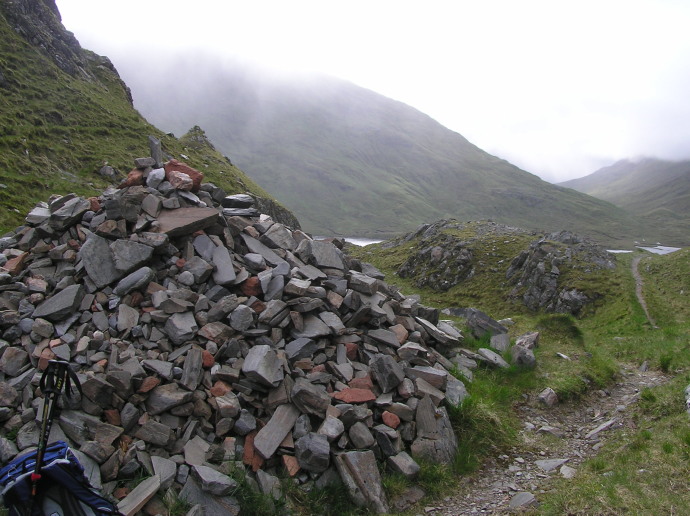 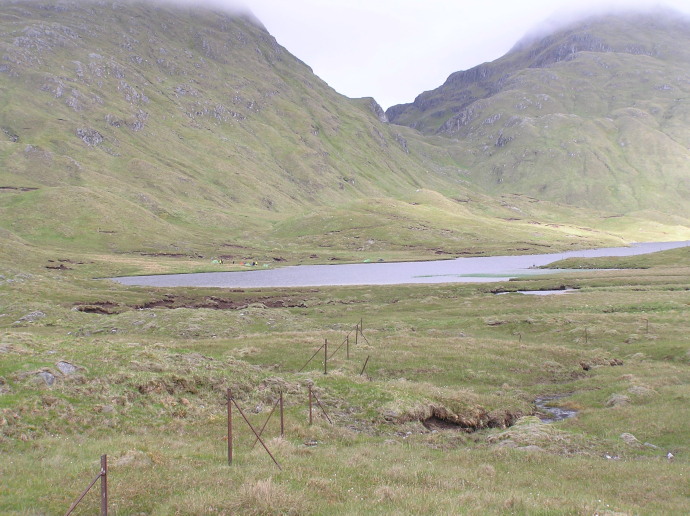 Retrospect of Bealach an Sgairne with campers across Loch a' Bhealaich 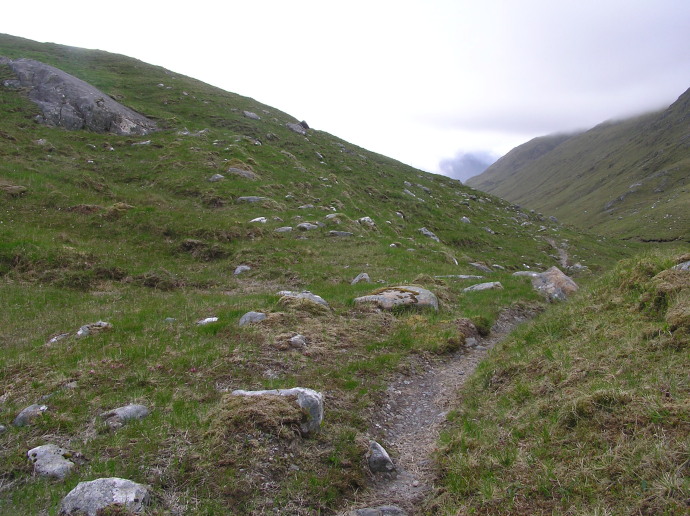 Path through to Affric 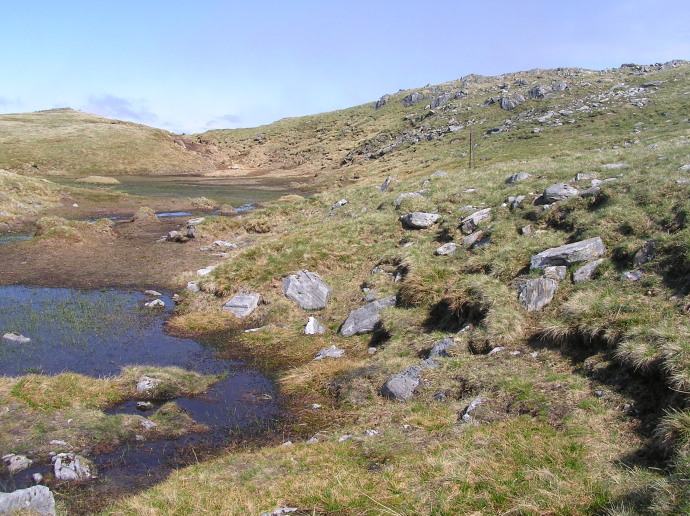 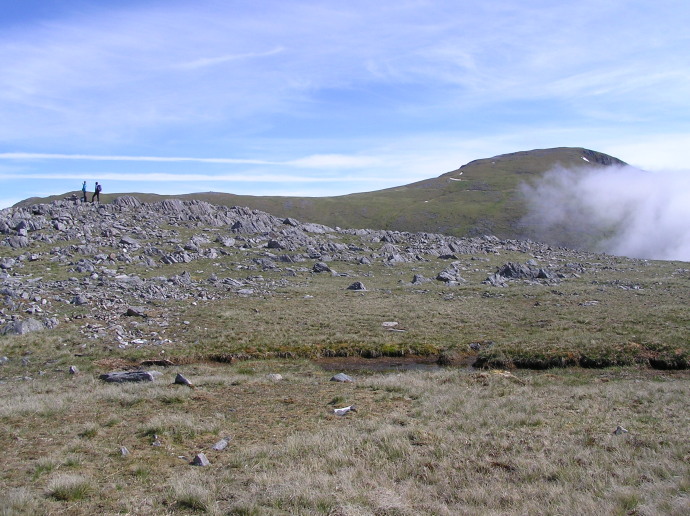 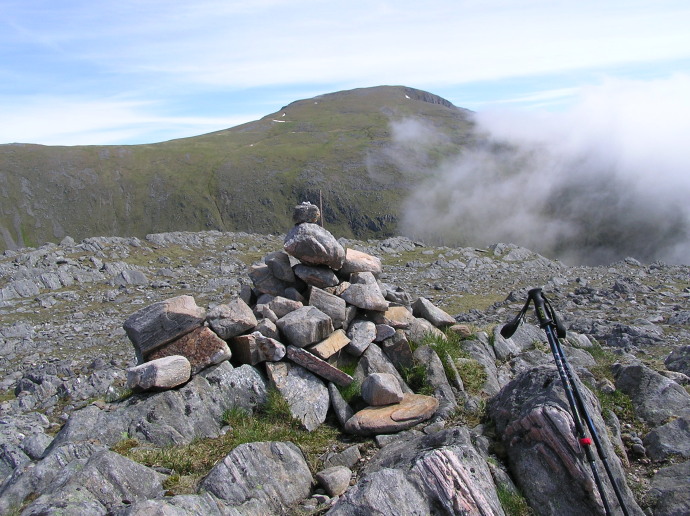 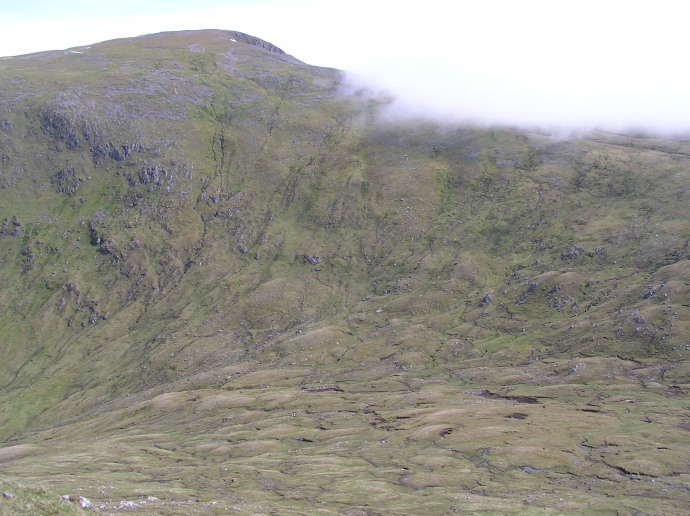 West top of SnC across bealach 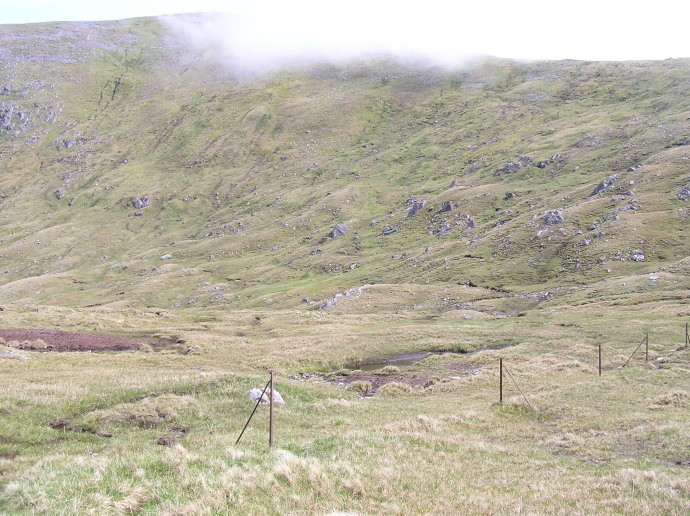 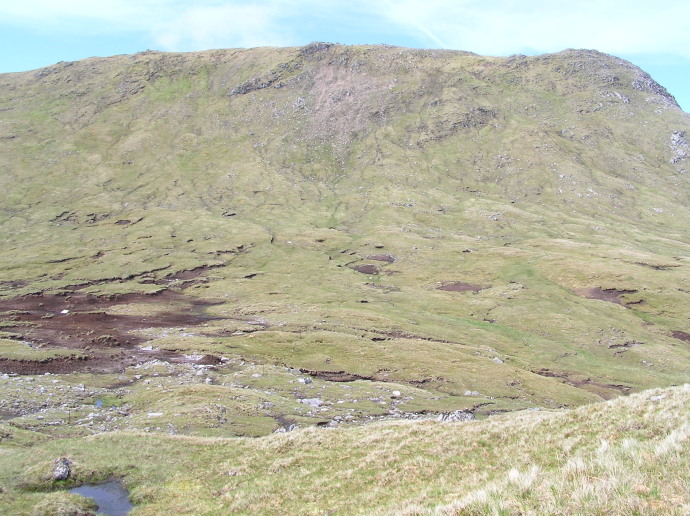 Retrospect of descent from Sgurr Gaorsaic (north side of landslips) 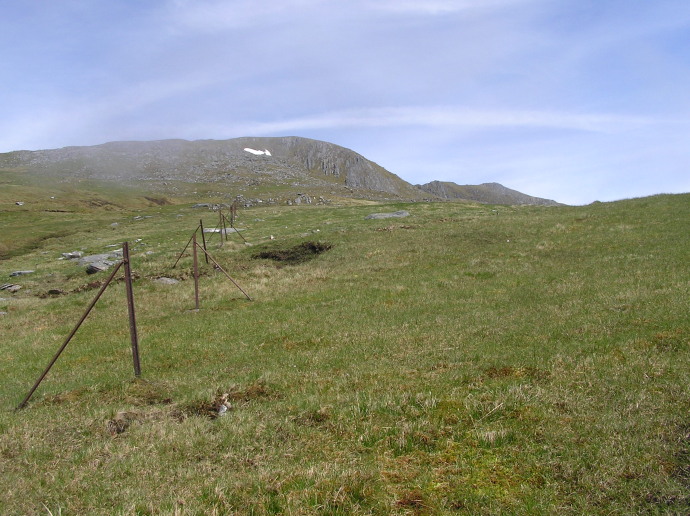 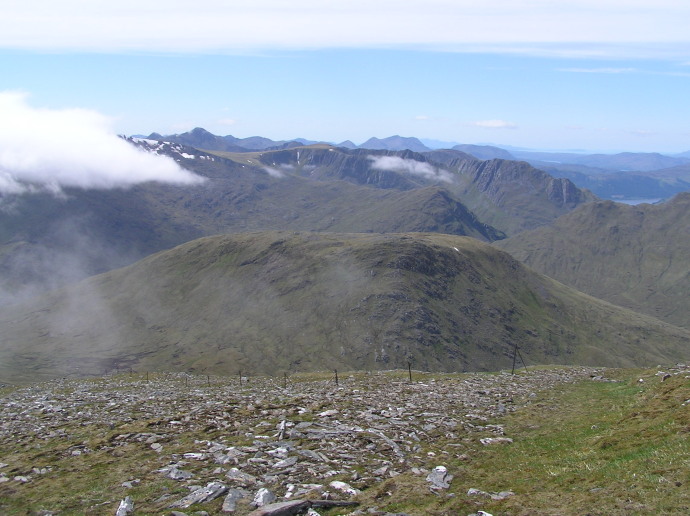 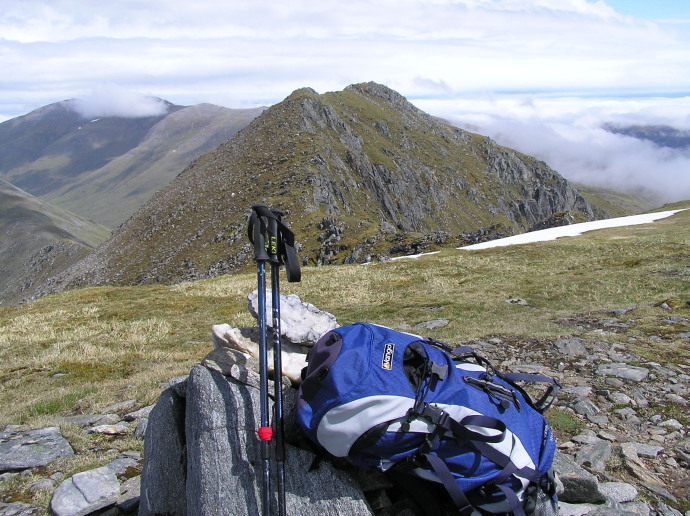 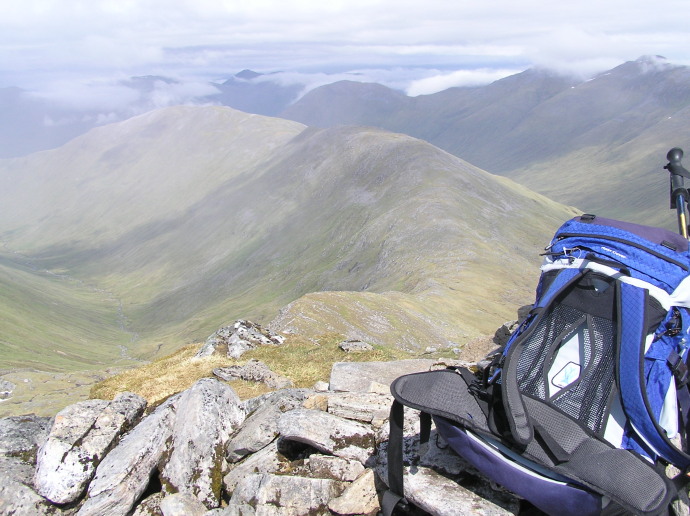 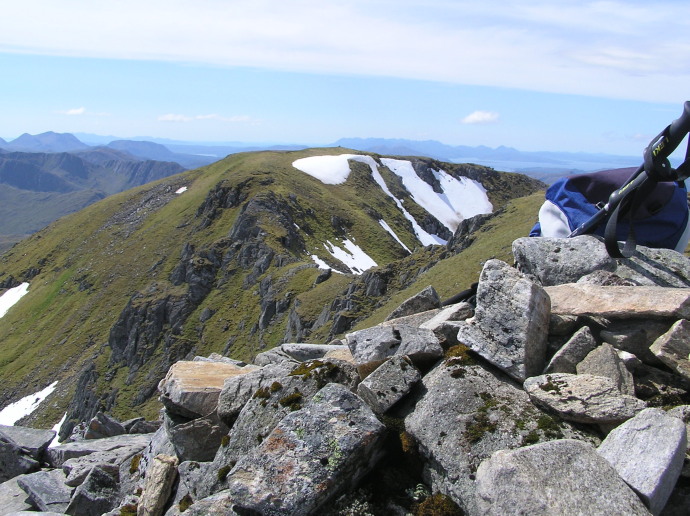 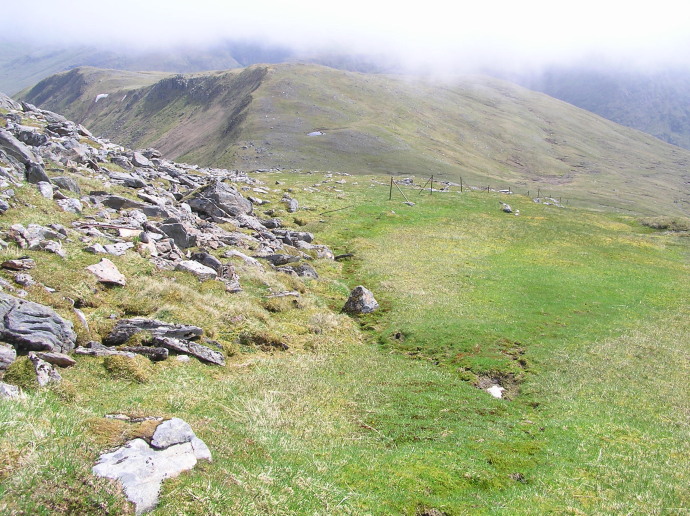 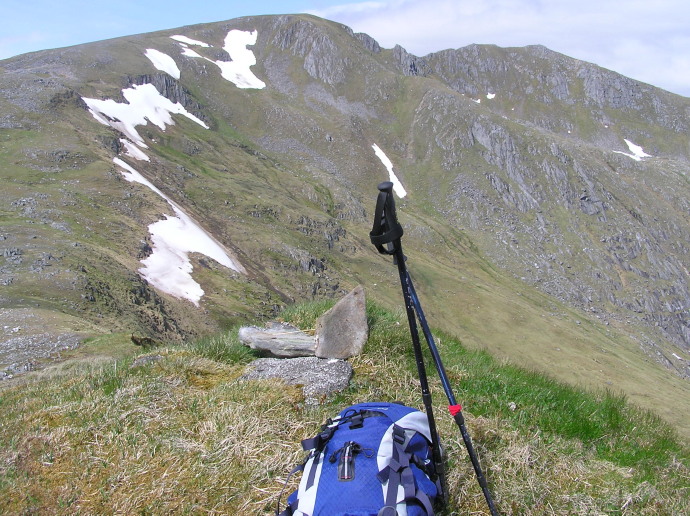