Hello all, was in the Lakes yesterday,we set off at 5.30am to drive to Grasmere and were kitted up and away for 8am, amazing as the M6 was a nightmare due to heavy rain. The BBC said it would be dry in the Lake District, the showers leaving the area by 7.30am, yeh.

easdale.gpx Open full screen  NB: Walkhighlands is not responsible for the accuracy of gpx files in users posts
We parked in the layby on the main road and walked down to and along the Easedale Road branching left across the stream and up the valley to Sourmilk Gill.Tarn Crag can be seen just to left of the water. As we climbed steadily to Easedale Tarn the valley views opened up to us as did the ones of Helm Crag. 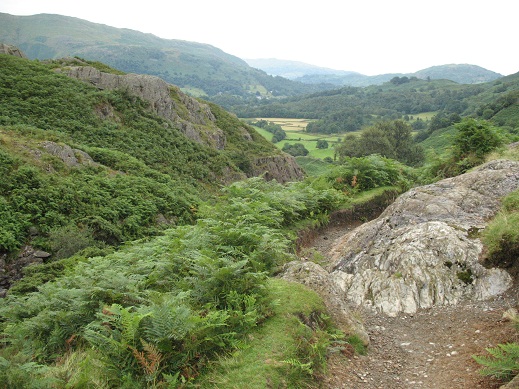 Valley, as we climb 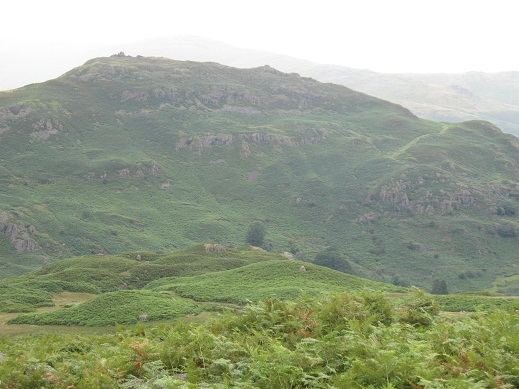 We continued until we reached the Tarn and true to form the Beeb got it wrong as we had a shower, not as bad as some areas judging by the fierce clouds, we seemed to dodge the worst all day. We turned off the Tarns path and made our way up to Blea Rigg, our first target of the day. Up to Blea Rigg

The views back to the Tarn were great in in overcast conditions, sometimes the light is better for photos. We didn't take the final grass slope as it was so wet, so met the main ridge and ascended when we were in line with the summit. The route to Sergeant Man was one and a half miles but with no distinct path and so many rocky outcrops it was probably further for us, still there was the wonderful sight of Harrison Stickle and Pavey Ark to look at. 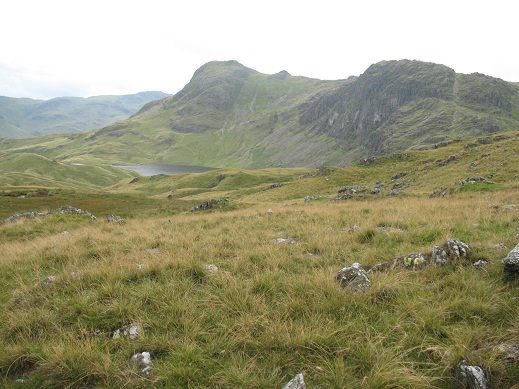 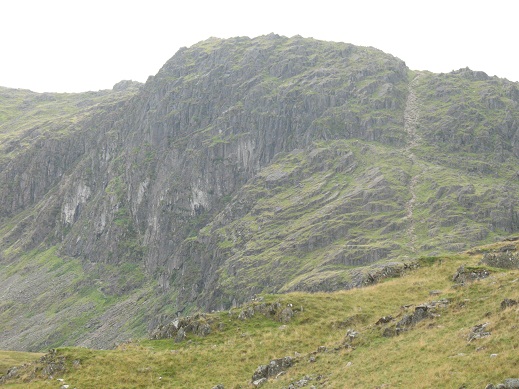 Then of course the gorgeous Stickle Tarn comes in to view. We had a climb now to reach Sergeant Man which is a great platform to take in the fantastic sights of the area. After taking in the sights we looked north to our third top, High Raise (White Stones), we could see the top from the top of the Man but knew when we descended it would be blind and the routes crossed a very boggy area. As we reached High Raise we could see a very low cloud over Borrowdale. We didn't stay too long, we thought the rain was heading for us, which is a shame as the range of fells you can see from here is immense, they say its the centre of the Lake District, the summit is 762m and really strange with the white quartz ? stones. 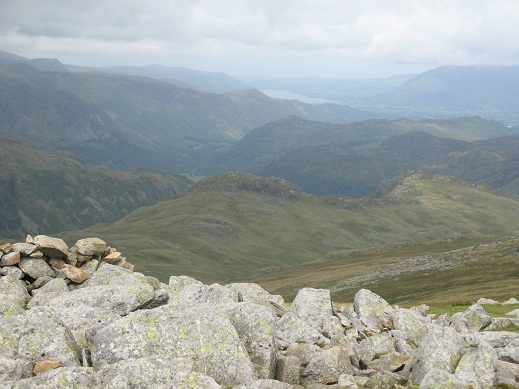 Sergeant Crag and Eagle Crag at bottom of picture, plus numerous others

As we passed the Birkett of Codale Head at 730m we could see our descent to Tarn Crag and also rows of fells, the Calf Crag to Helm Crag line, behind was Steel Fell, then the Helvellyn run and behind St.Sunday Crag peeping up, fantastic. This is what it's all about. 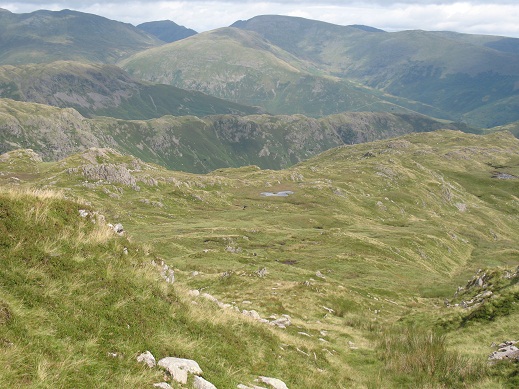 Close up of St.Sunday Crag

The sun was out and it was quite warm as we could see Codale Tarn with our first climb, Blea Rigg behind We reached Tarn Crag after a bit of meandering, you wouldn't want to be stuck up here with low visibility as the paths are non existent It was down again but still a way to go, Helm Crag is beyond our descent 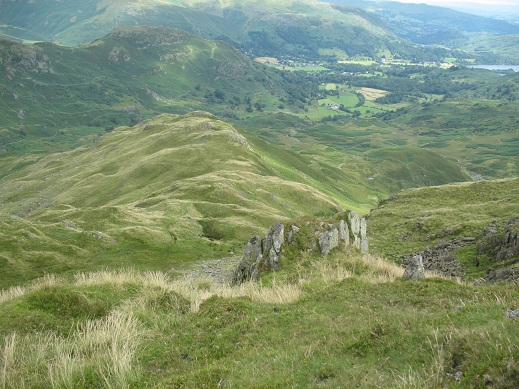 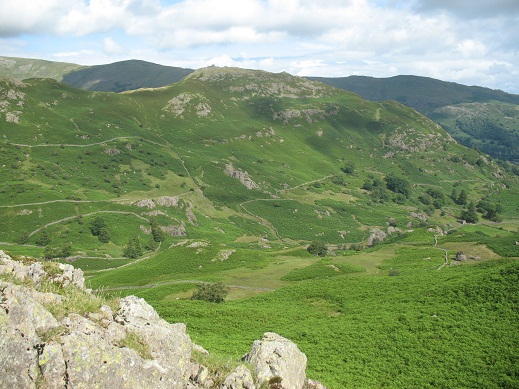 Just before you reach the bridge there are the two rocks, the left a signpost, the right has a tree growing out of the middle 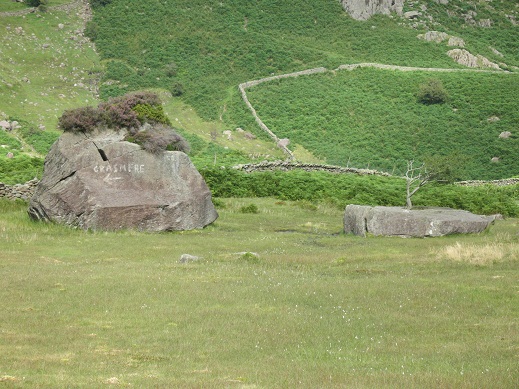 It was now a longish walk back along the river past the old quarry and to Easedale Road, then wearily back to the car. A tiring day due to the rocky and then very boggy areas, still we had booked a B & B in Borrowdale and would like to sing its praises should you want a place to lay your weary head. Not only is it in a beautiful area off the road across from Catbells, it has parking spaces, clean well equipped rooms and a great brekky, the host Mrs Edmondson will look after you. www.troutdalelodge.co.uk will be out saturday, take care, sorry if I put so many photos on but its hard to choose when you take so many, thanks Sue

Nice report Susan, I don't mind lots of photos in reports when the views are this good.
Is Jake's Rake the stony looking gully on the right of the picture, or is it a more sinister climb somewhere in the middle?

Sorry, didn't explain that very well, have uploaded a photo with Jack's Rake on, to best of my photoshop ability, thanks Sue 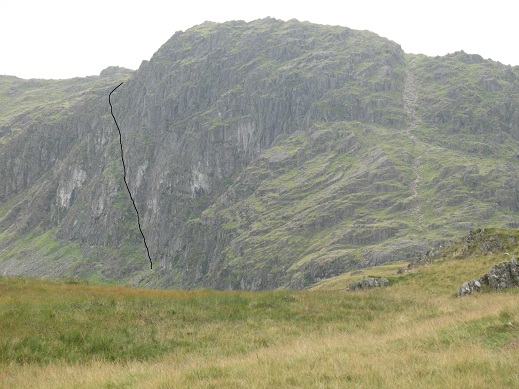 The right hand stony ascent is the gully. If you look back to my posting called Pavey Ark/Harrison Stickle which is on page 17, it shows us climbing the rake

Nice report - always surprises me how soon you get into wild country behind Grasmere.

I Sue excellent report as ever. I did that walk just after Christmas in the snow great fun.

How on earth did you navigate in the snow